Here is 2015's photo spread from the small wildlife refuge in a mangrove swamp at Playa Linda, Popoyote Lagoon in Ixtapa, Mexico. I look forward to seeing what I've come to think of as "my" animals each year. It's hard to say who is my favorite between the roseate spoonbill birds, the iguanas, or the American crocodiles. But it appears that I never tire of photographing any them. (See pics from past years here.)

I guess maybe I consider the spoonbills the most special because there is no bird like this anywhere near where I live! They seem very exotic to me. And I've watched their population grow at the lagoon. The first year I there, there was one breeding pair. Now there are several. They are pills to photograph because they hang out in the dense mangrove foliage. It's hard to believe such large birds fly around in that space, but they do! 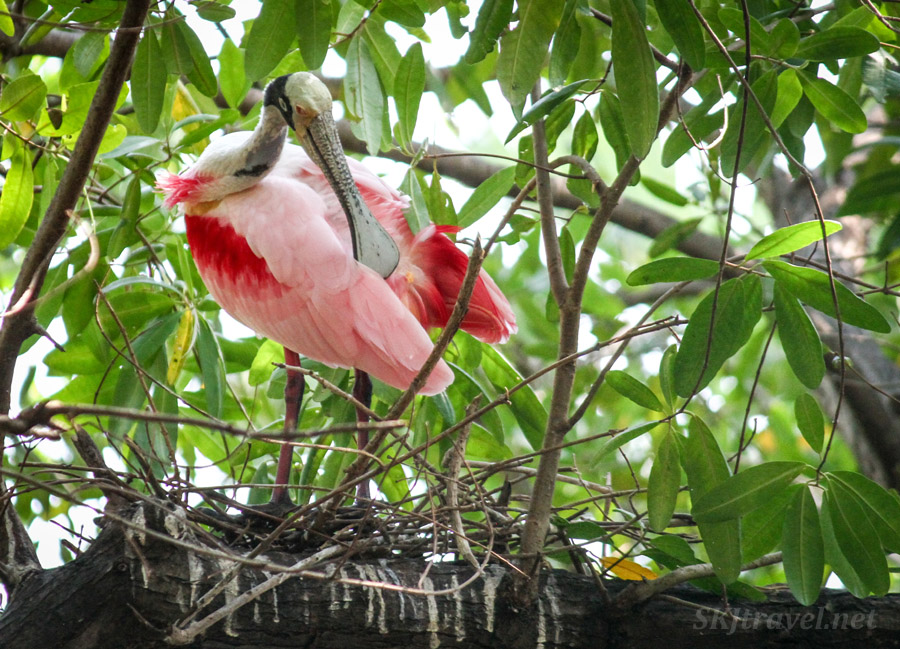 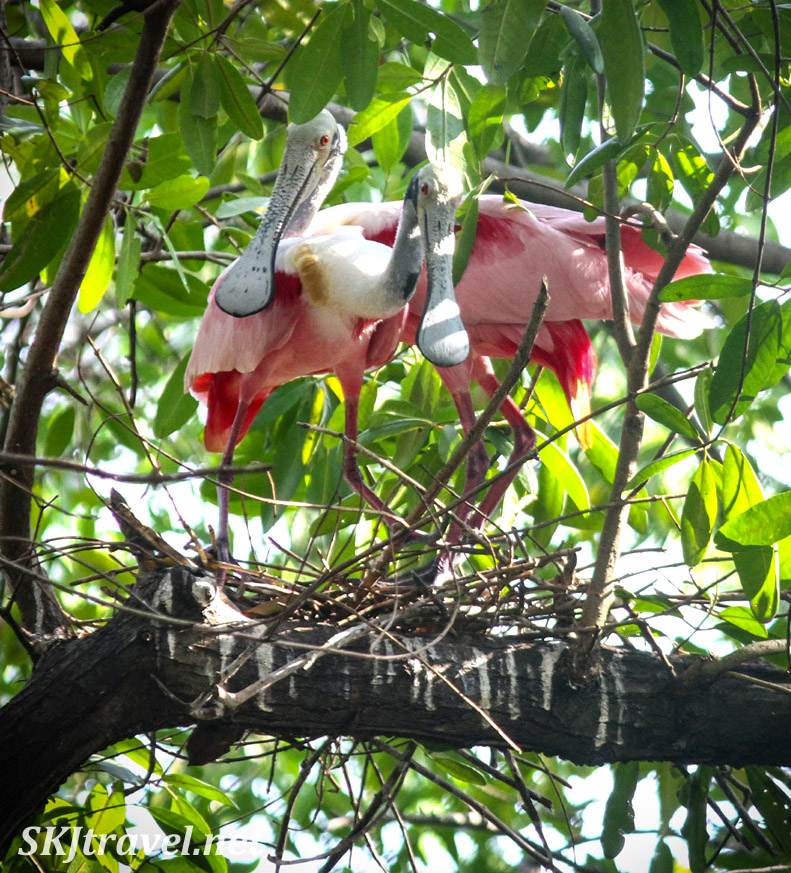 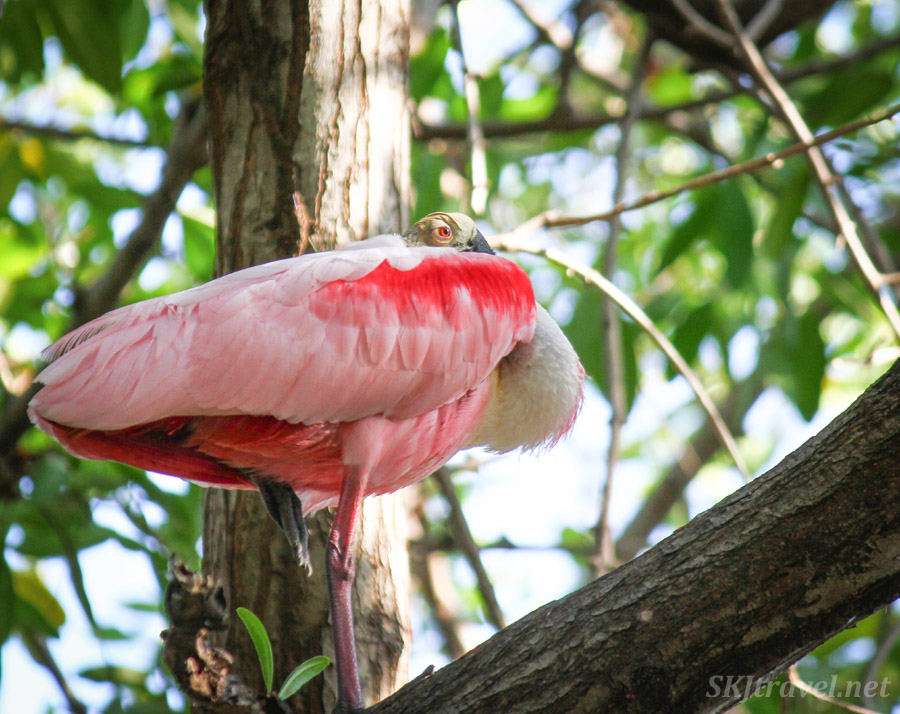 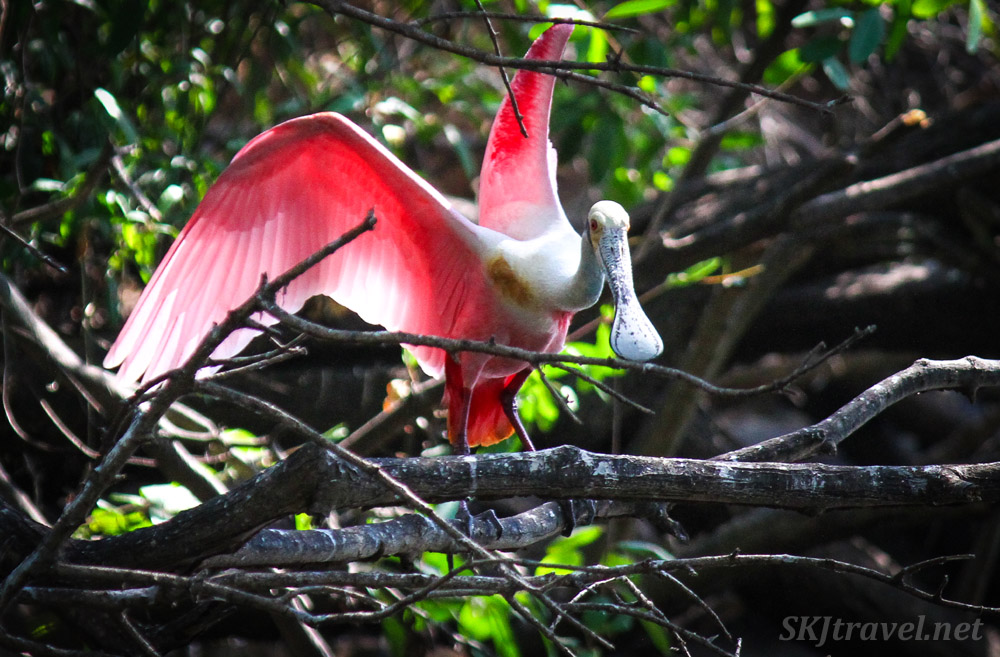 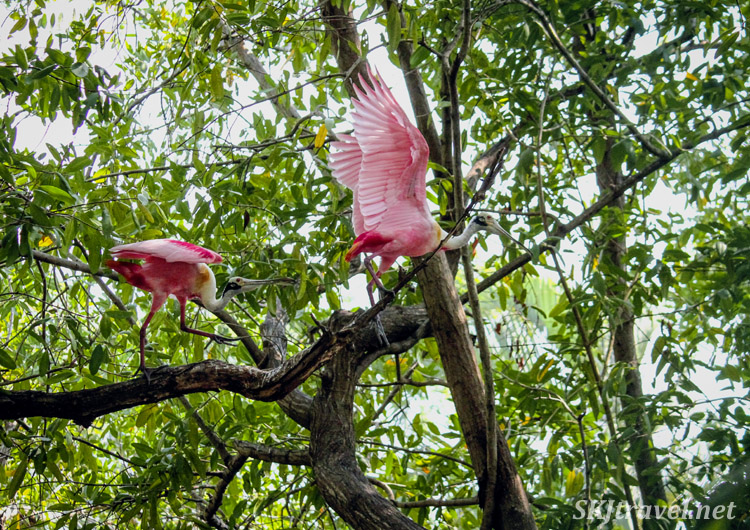 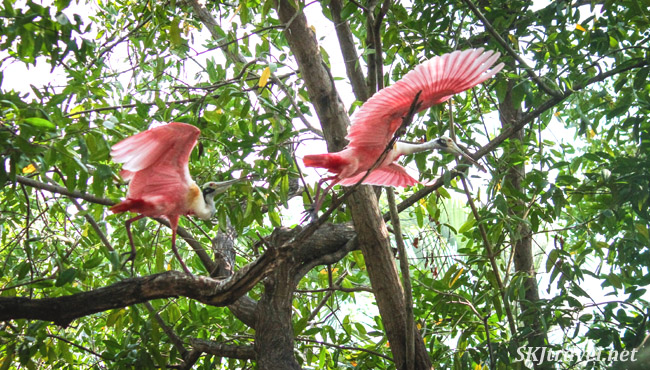 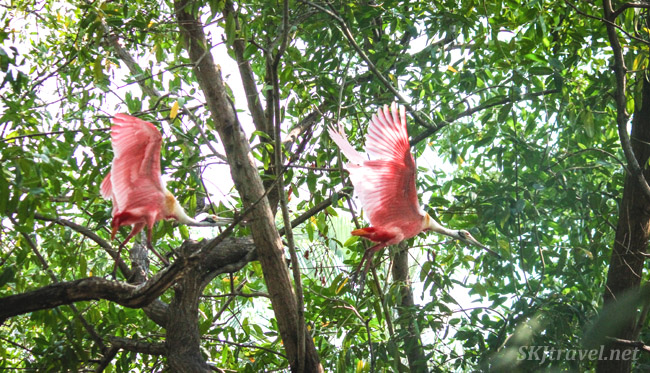 And now presenting the crocodiles, for whom the refuge was established. The other creatures who make it their home are just happy upshots, they found the reserve to be a suitable and pleasant place for themselves as well. But the lagoon was fenced off to protect the crocodiles. These are big boys! Again it's hard to believe so many hang out in this narrow mangrove lagoon, but I've seen 20 or more sharing a small piece of sand to sun themselves. I'm so clever, I call this series of two pics, "Croc pot." :)

Now we add a little unfortunate fish to the croc pot ... but if you notice, he is a rather toothy fellow himself. Reminds me of Star Wars movies where no matter how big and scary one carnivorous creature is, there is always a larger one who comes and gobbles up the first one. 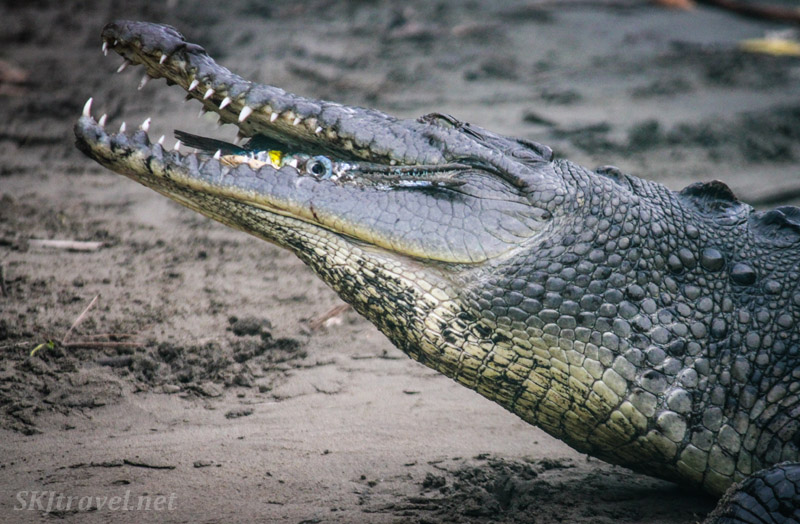 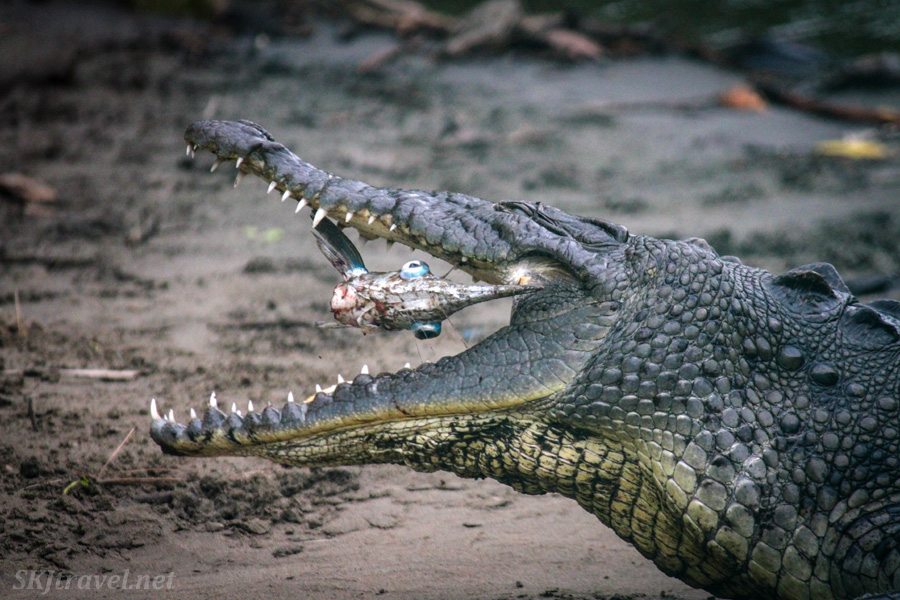 And now a collection of crocodiles showing us their best sides. 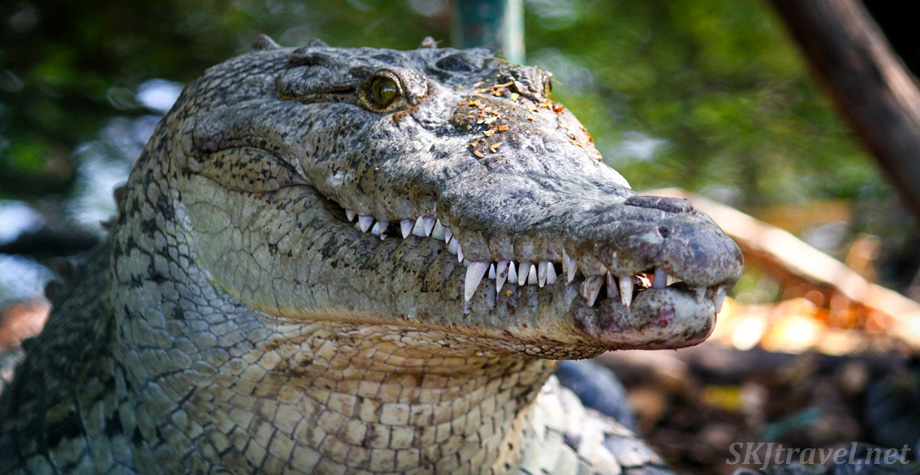 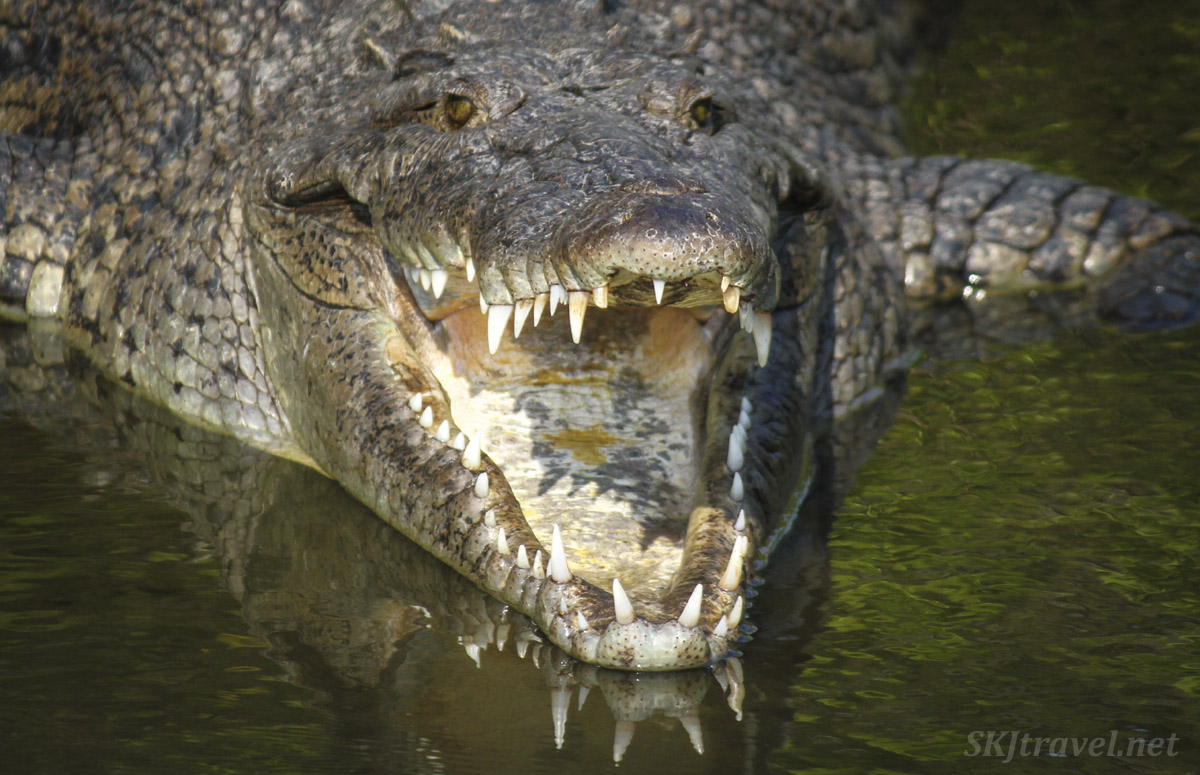 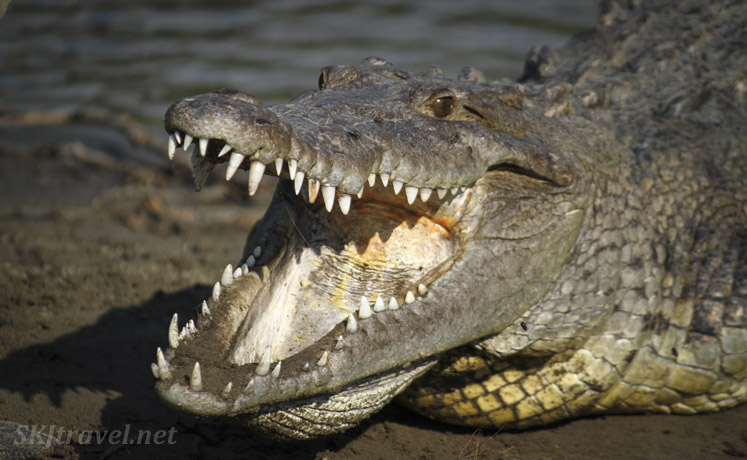 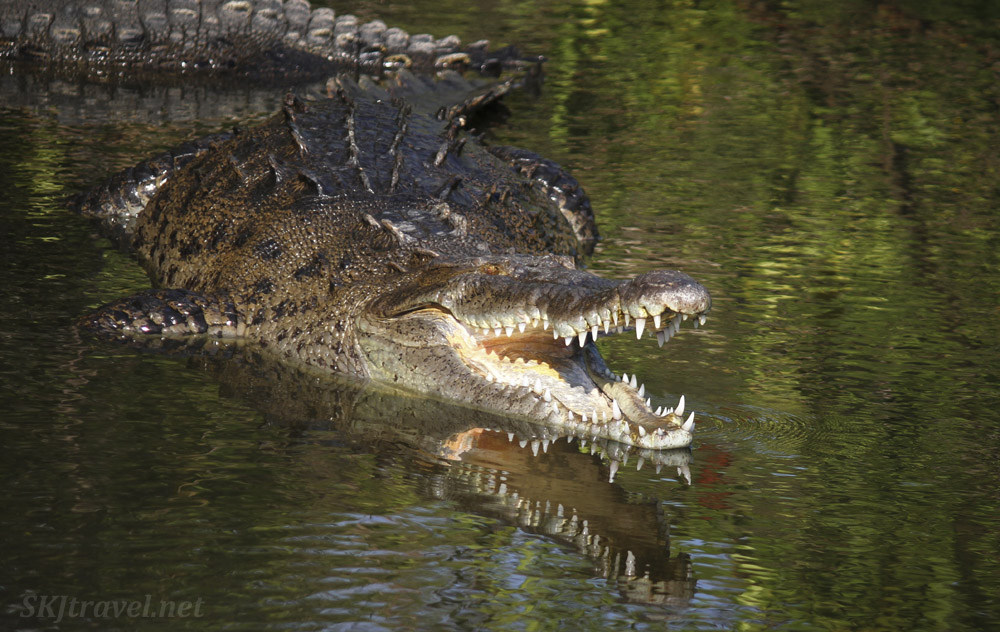 Now the iguanas, which I find consistently fascinating -- simultaneously mesozoic and medieval, representing great ancientness and evolution, but looking as if he's wearing a knight's suit of chain-mail armor. Though to be sure, any knight wearing such flashy colors on his armor would have been mercilessly teased. This male iguana particular amused me getting all jiggy with this twig. First he looked like he was dancing with it and then he climbed up it and showed me his belly, which I don't normally get to see on these guys who are usually scampering around on the tree limbs. 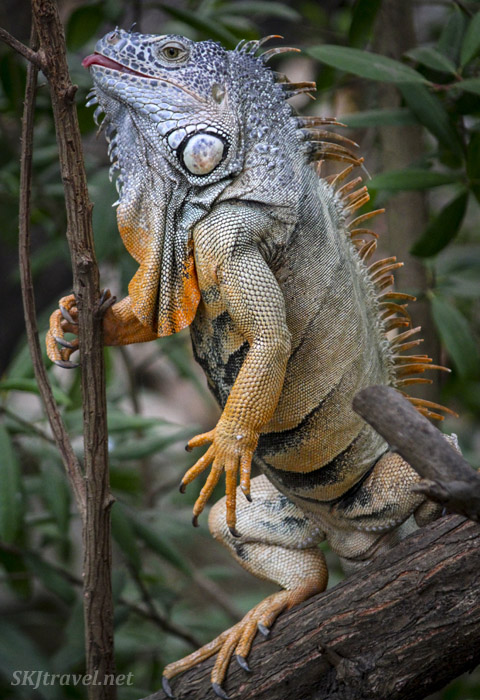 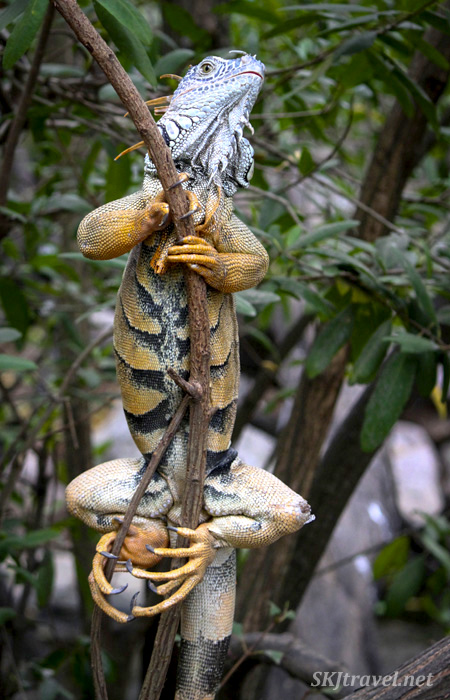 Traffic jam in the trees! Move it, Bubba! 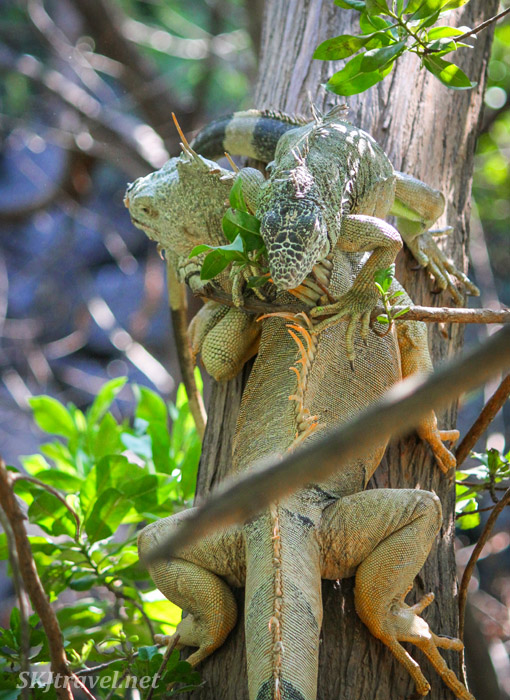 And now the iguanas want to show off their best sides, too. I definitely consider their tongues one of their best, if slightly creepy, sides. 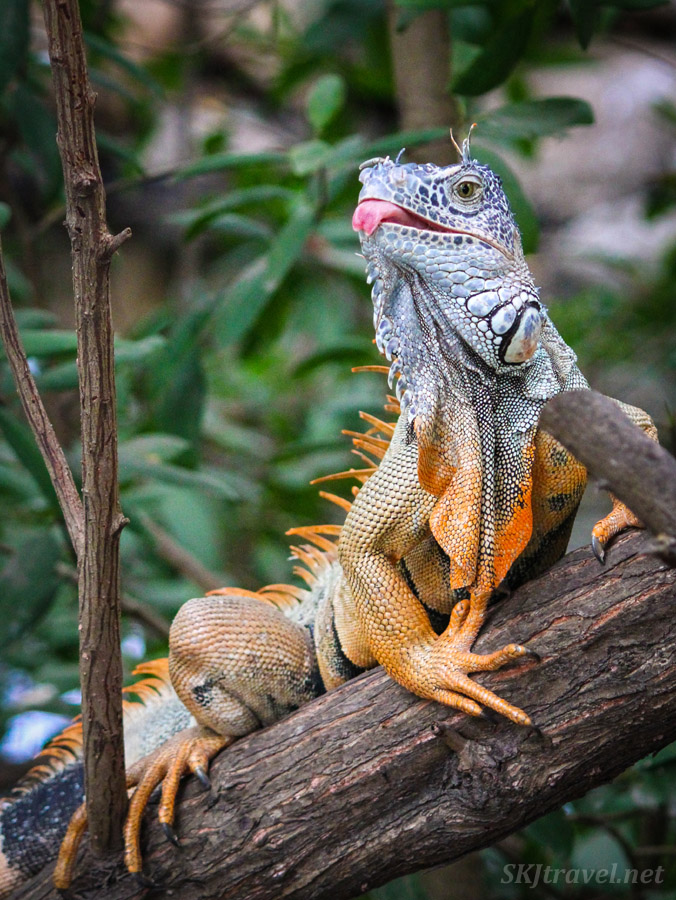 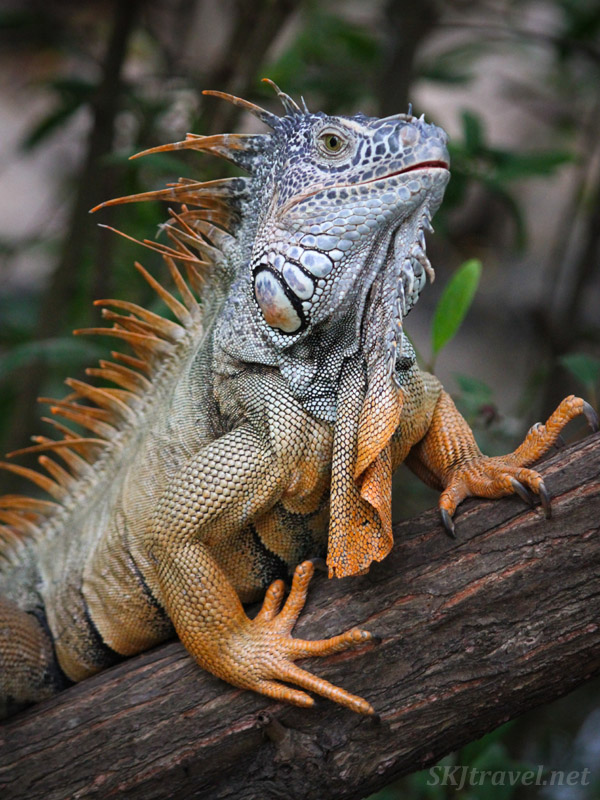 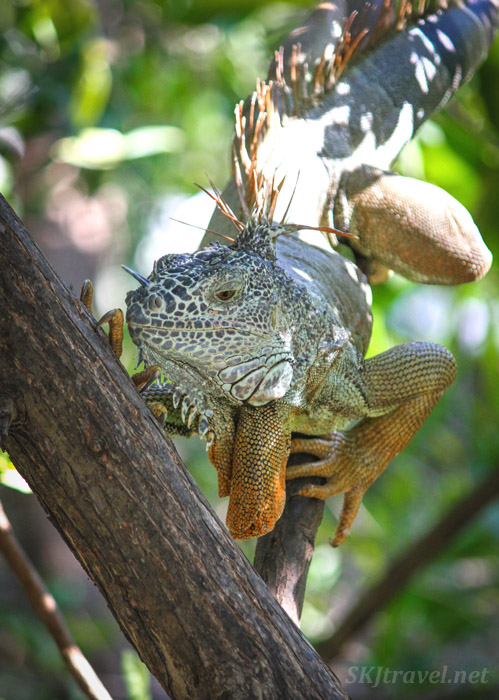 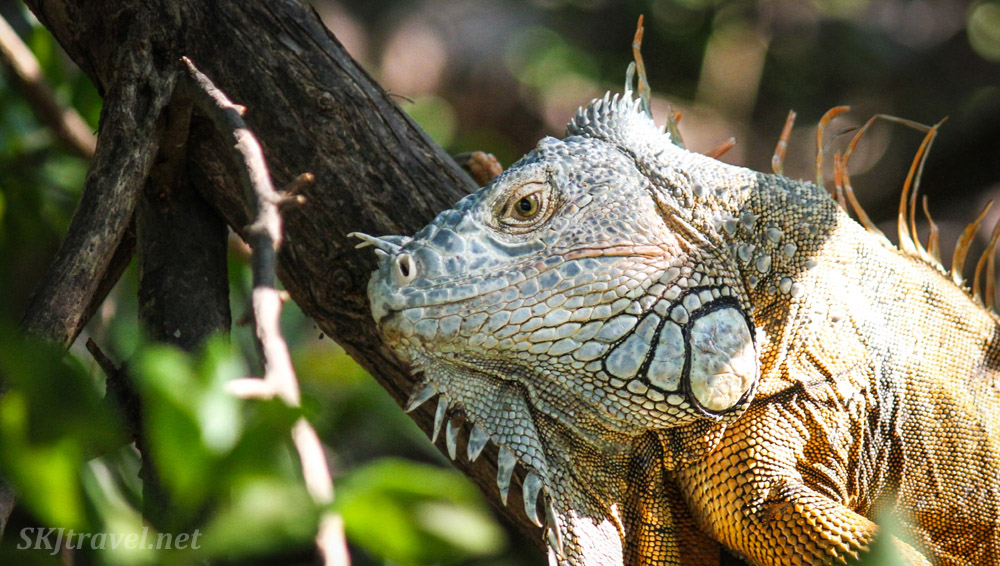 Just like when I'm in Africa on safari, my favorite photos are always ones in which different species of animals are hanging out together. Here are some brave birds casually strutting along the shore next to the crocodiles. I guess you gotta do your business even in dangerous waters. 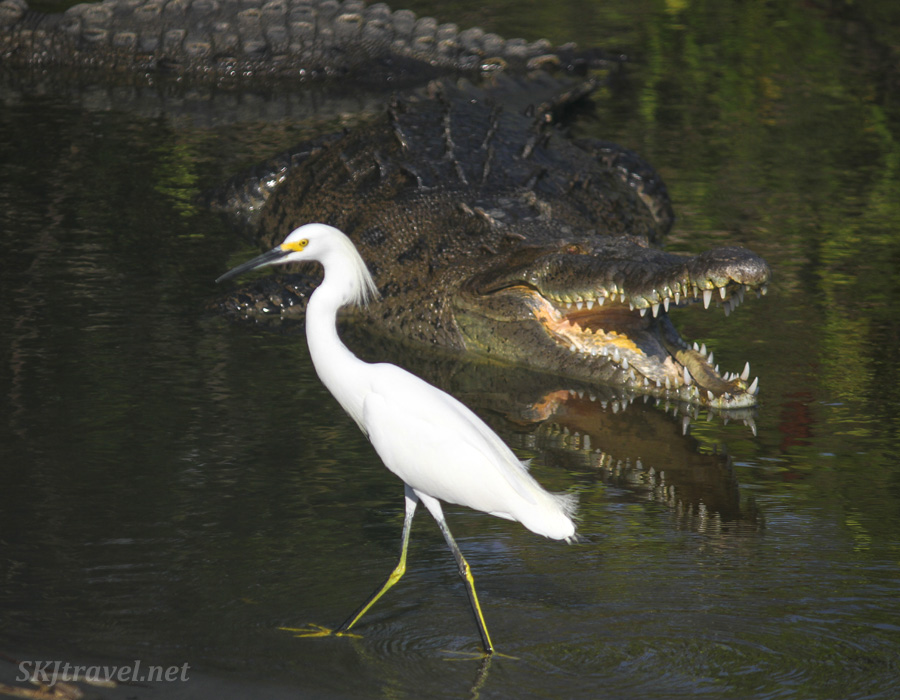 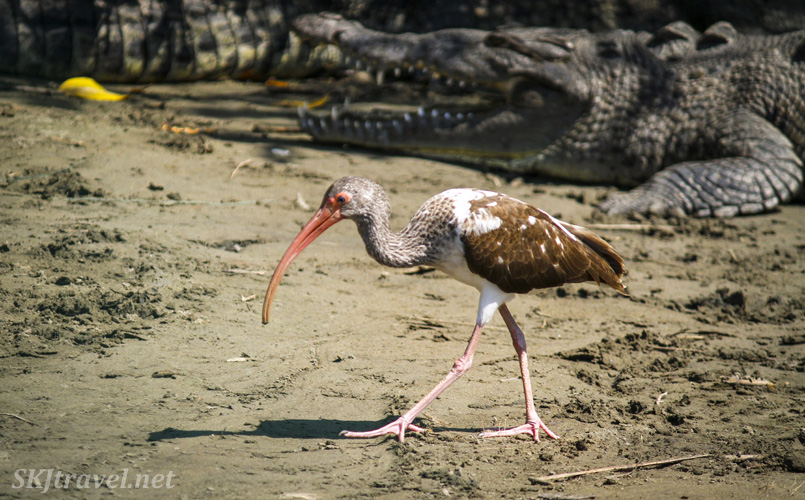 A couple other birds to show ... the ubiquitous white egret and the somewhat more rare boat-billed heron. Its cousin the green heron hangs out here, too, but they are typically elusive to me. Maybe next time! 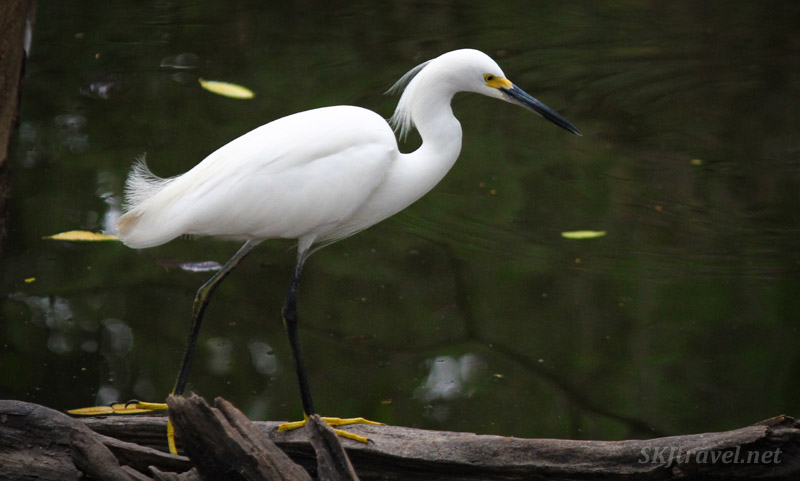 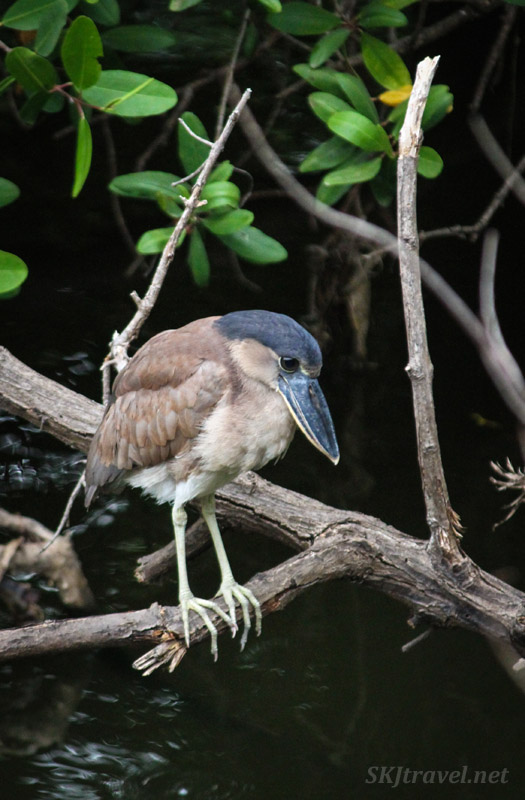 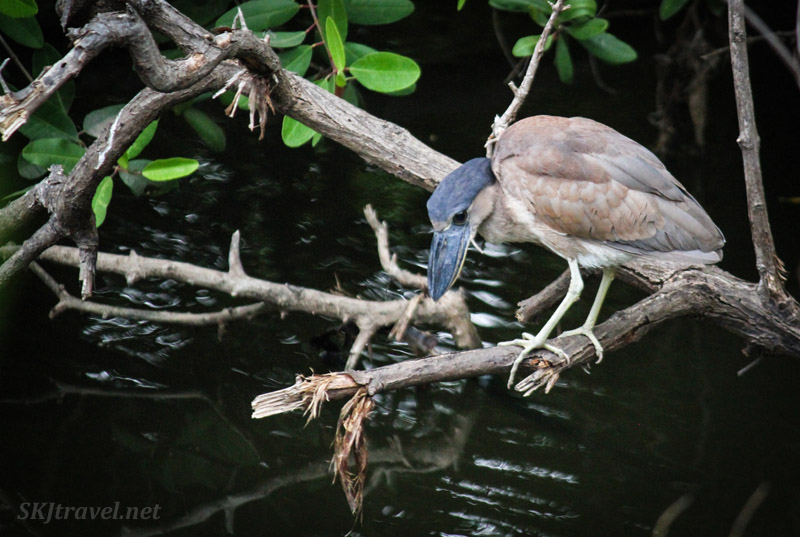 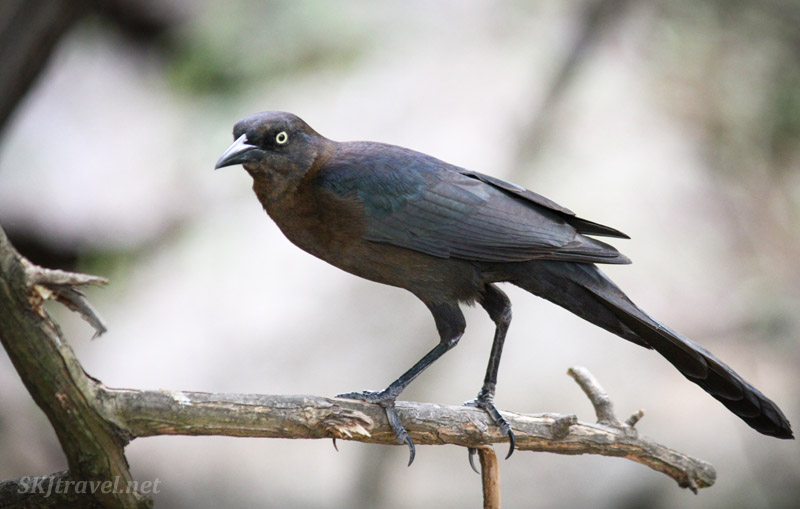 And lastly, a little turtle love. 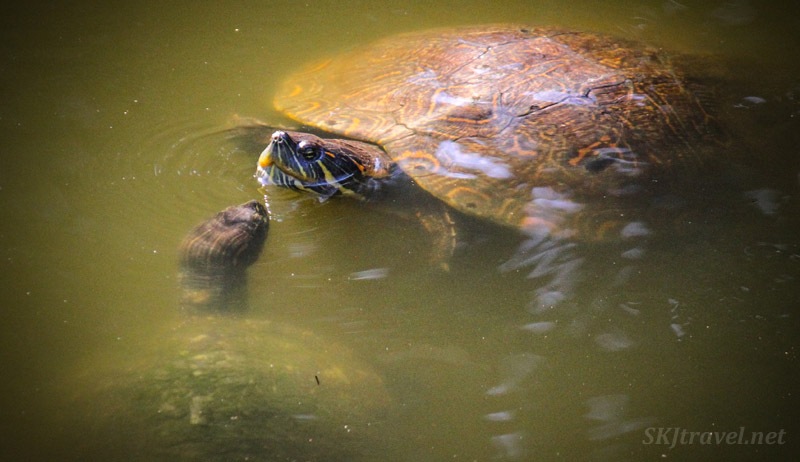