all photos in this post can be seen larger by opening in a new tab (right-click).

I've always loved the hair salons you see along the roadsides in Africa. Finally on this trip, I decided to take a few photos ... one afternoon on a long haul, I kept my camera ready at the window for an hour or two, and every time I saw a hair salon coming up, I grabbed the camera and snapped a pic from our moving car. Well, not even every time, only sometimes; there are just so many. What has always struck me is that the buildings often look so run down and NOT pretty. It just seems to me that if I wanted to have my hair done up pretty or jazz myself up for an evening, I would not feel very encouraged to walk into one of these hovels and trust someone to be meticulous and stylish. And they seem very unlikely to have a hair dryer. haha.

In truth, the ones I ended up snapping photos of were quite well-kept compared to a lot of ones I've seen. Because the more primitive ones, you don't even see the sign until you're practically right on top of it and I couldn't get the camera up in time. So actually, some of these look pleasant enough except they look stifling hot inside, just little cement boxes or metal boxes. I think I'd be sweating like a pig ... not like a pretty person.

But then I began to notice that sometimes the people were sitting outside, so maybe it's just a place to store their supplies, but when it's hot they work outside. Mostly they are doing intricate handiwork like braiding and such. Here's a gal working outside, for instance. 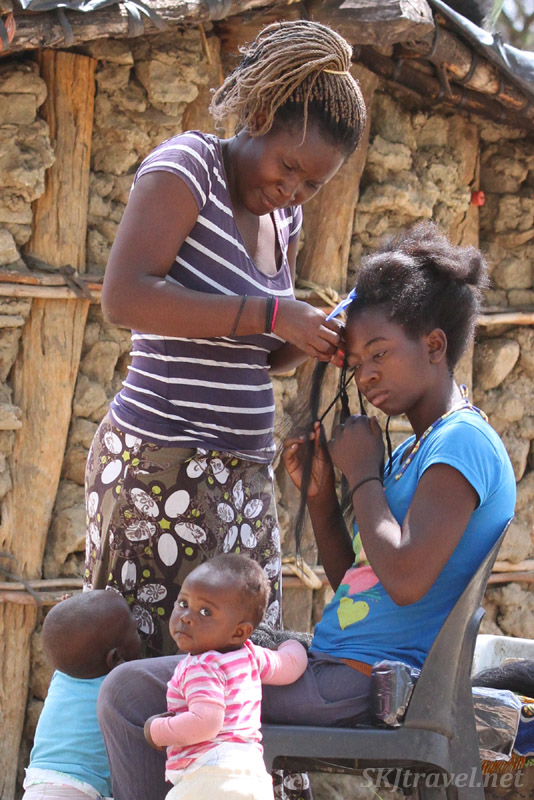 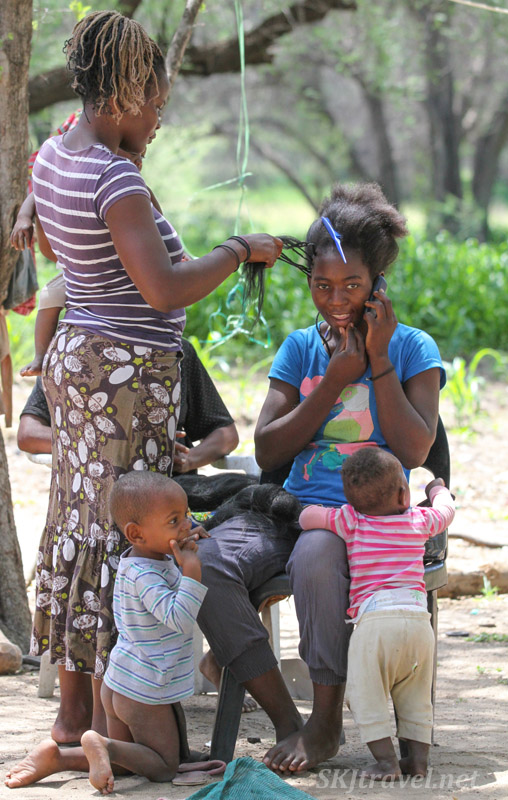 This is a woman I met about whom I don't have the most positive feelings, as she was part of a family accusing her grandmother of being a witch, however I really like her hairstyle. 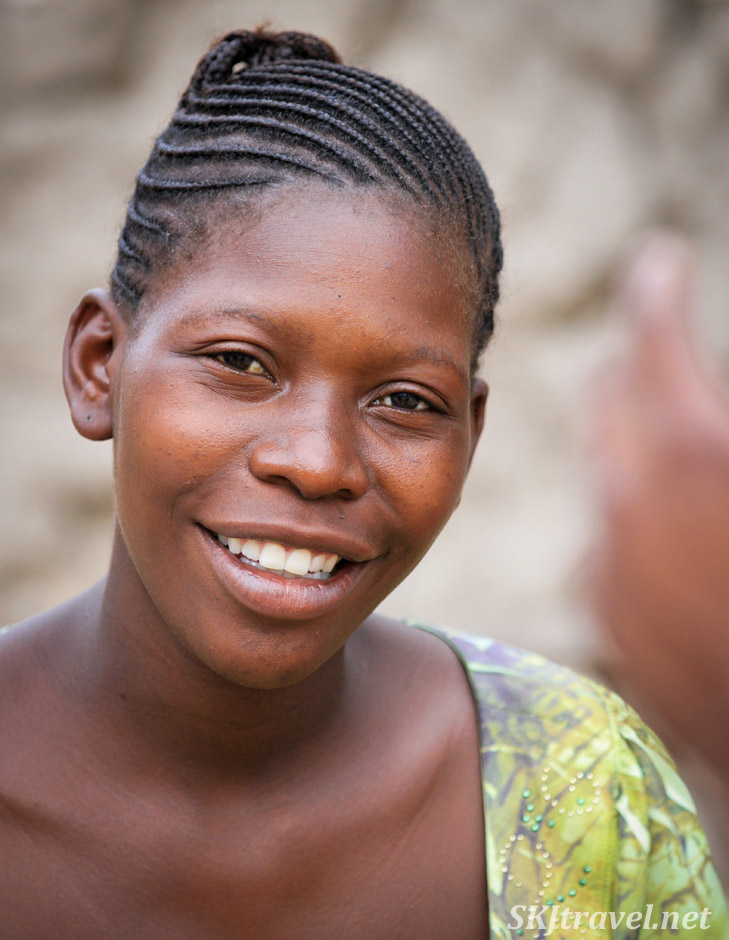 This girl I genuinely liked and she is also a relative of the grandmother accused of witchcraft, but she didn't see part of the conspiracy against the sweet older woman. (but who knows.) Again, I liked the interesting pattern of braids. 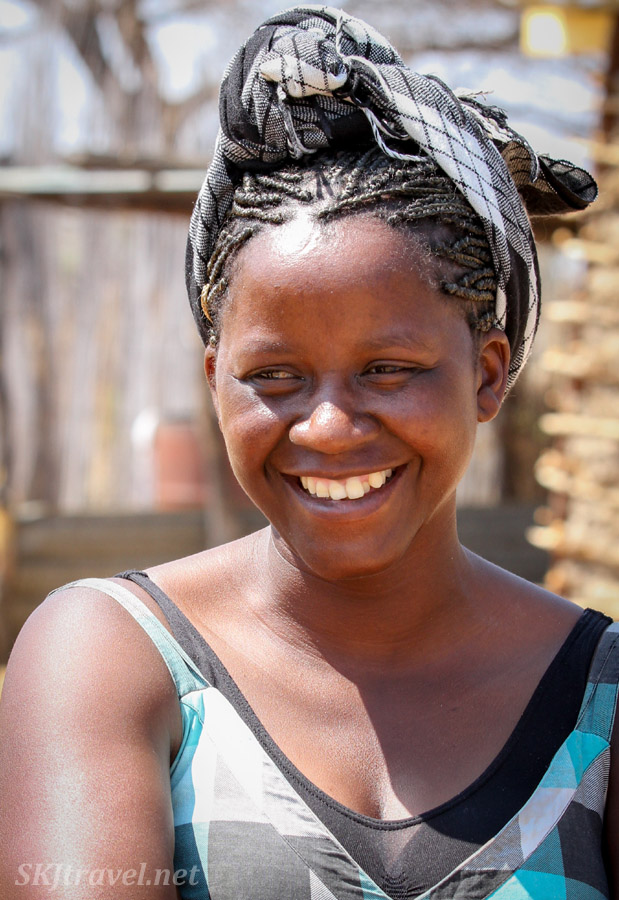 So here is a selection of the photos of hair salons I took from the moving car ... you'll have to forgive if they aren't awesomely framed or executed! Actually my camera did a better job than I might have expected at 120 kilometers per hour. My favorite one I saw on this trip I didn't get a photo of, but it was in Botswana and the words painted on the outside of the little shack were, "Hair Saloon." 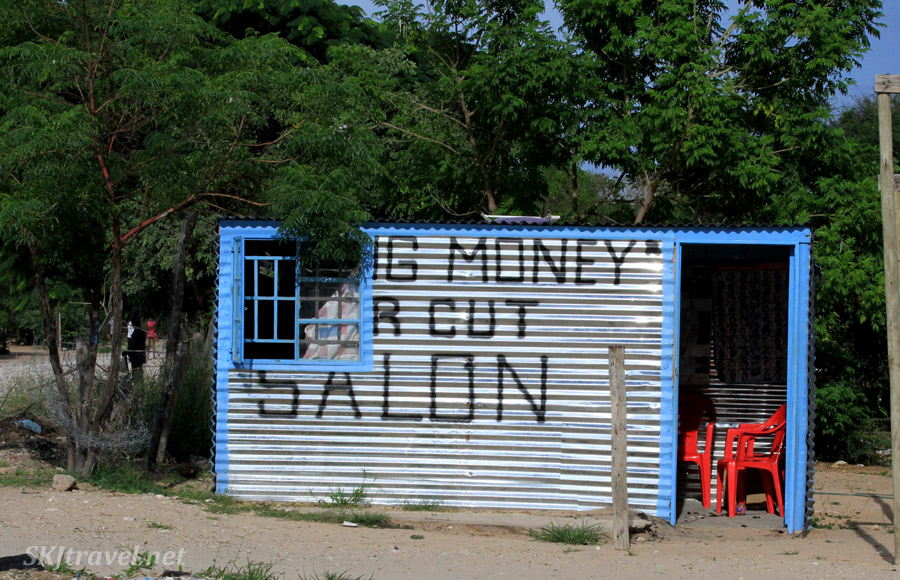 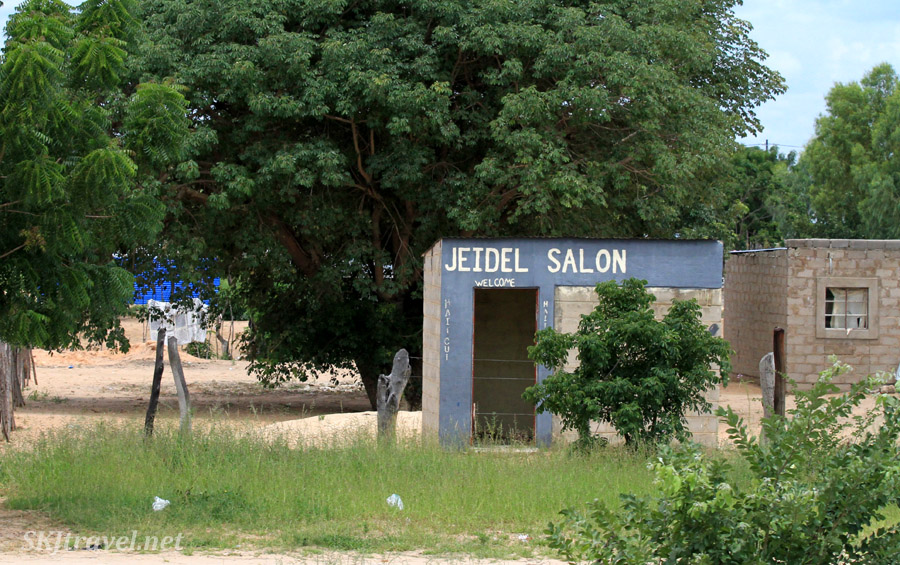 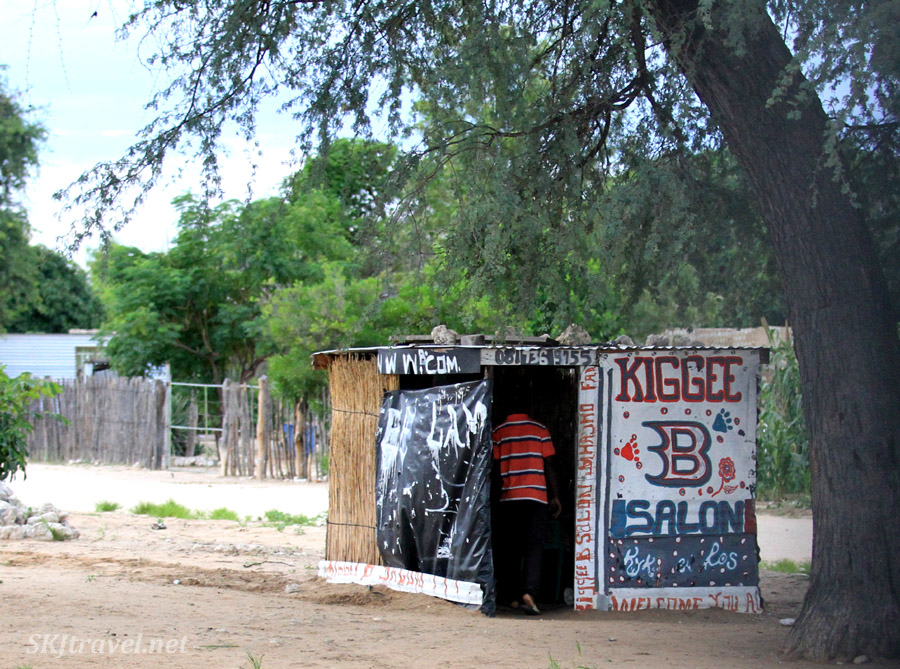 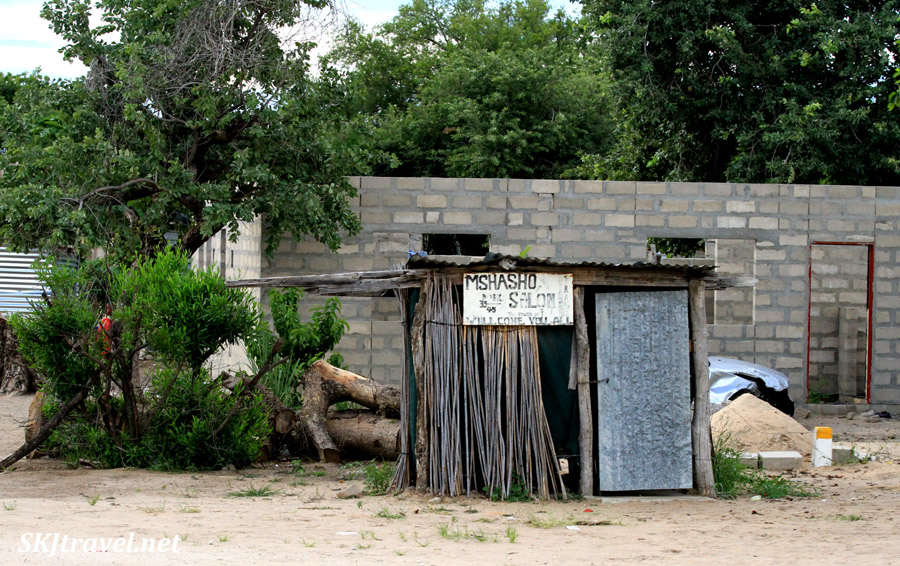 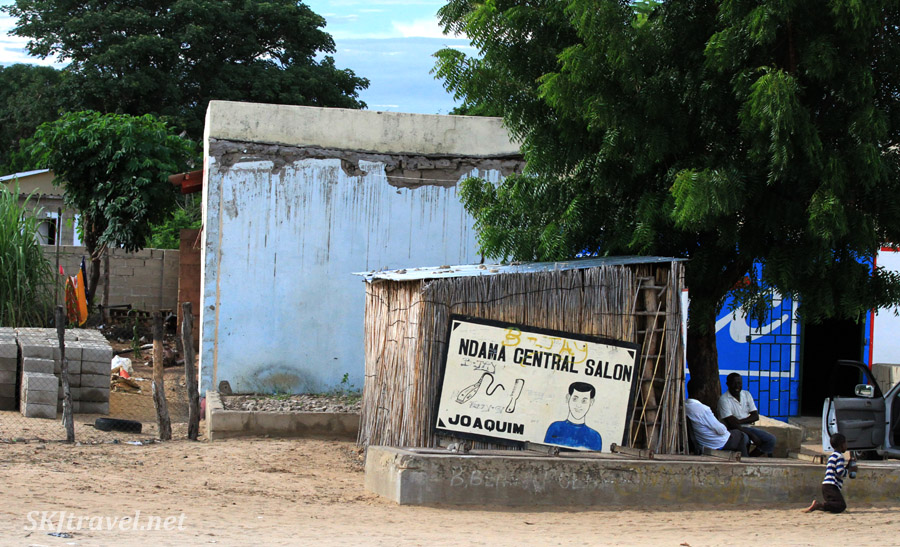 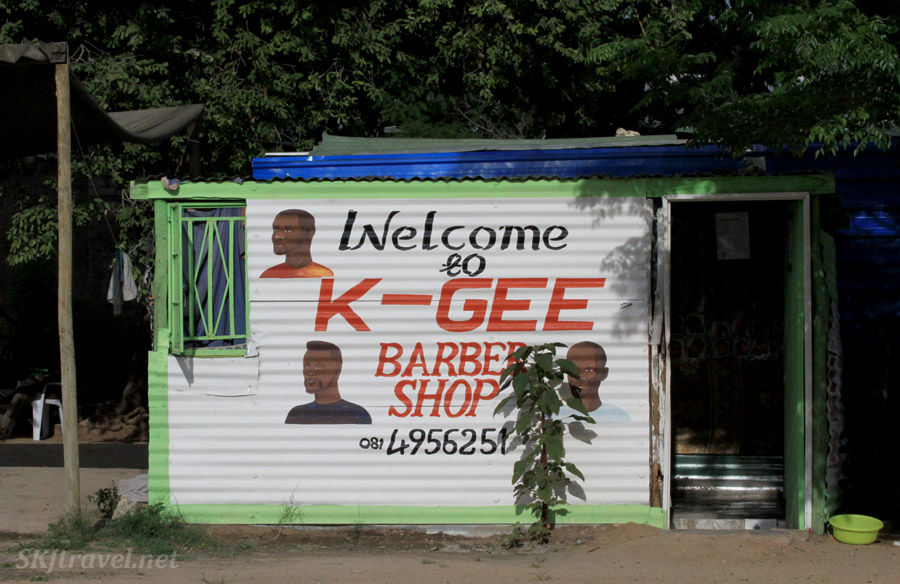 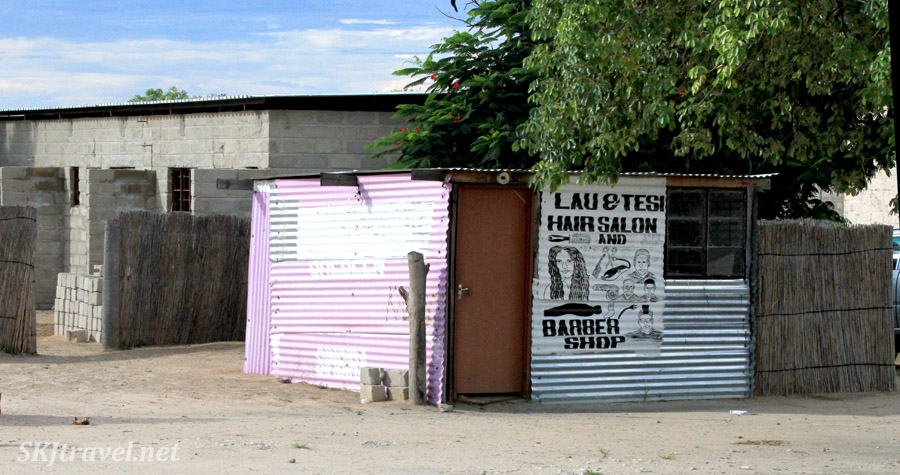 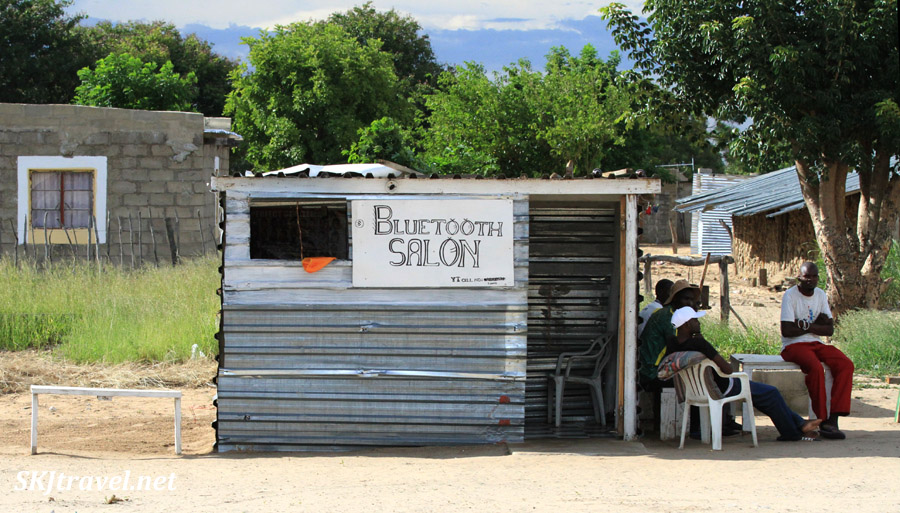 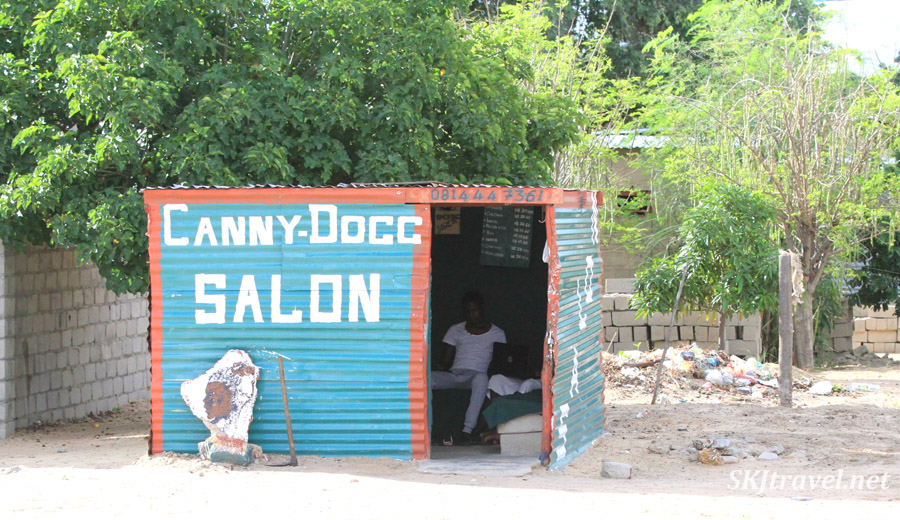 And here is my favorite that I got a photo of ... the car wash hair salon. I wonder if their idea was to wash your car while you're getting your hair cut, or to cut your hair while your car is being washed. Of course, if there is only one employee then I guess you must do them consecutively if you'e in the market for both. 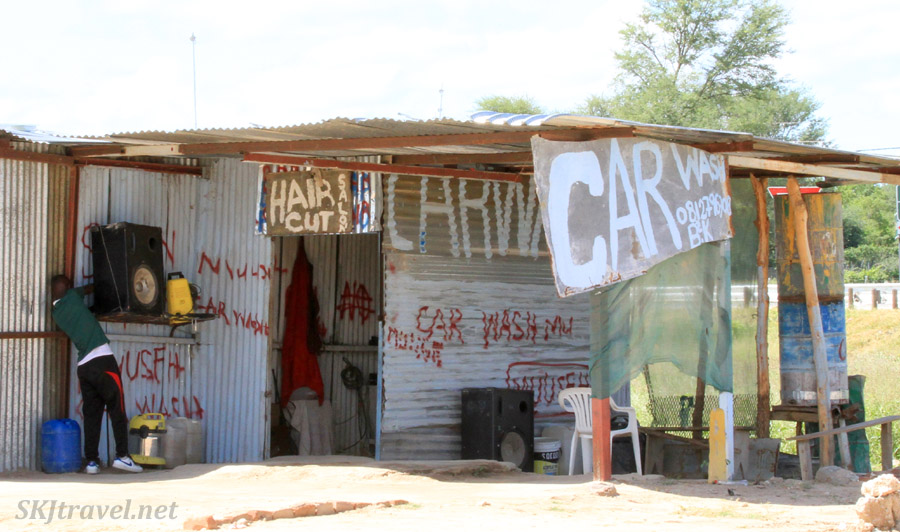 The hairstyles I love and appreciate the most in Namibia, though, are the hairstyles of the traditional Himba people. The women take a lot of pride in them. The braids are covered in a red sort-of mud mixture, similar to what they apply to their skin to make it smooth and reddish in color, which is made from local red ocher and an emollient such as animal fat or vaseline. The big tufts at the bottom are actually extensions, in other words, not their own hair.

It was cool that while we were there interviewing and filming for the upcoming documentary, African WitchFinder, one of the Himba chief's wives was having her hair worked on by some younger girls, including her daughter, princess Kaviruru. It seemed that they were braiding in new twine to the front of her head, presumable for her to attach her ornamental headpiece (worn only by married women). Here are a couple examples of that kind of headpiece that must be attached. The top photo is of the chief's eldest wife. 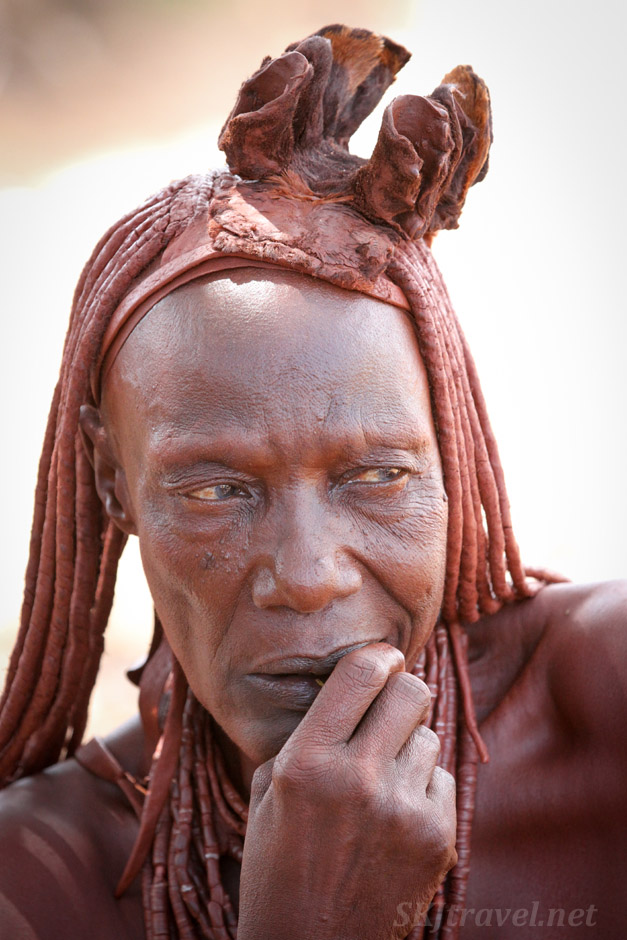 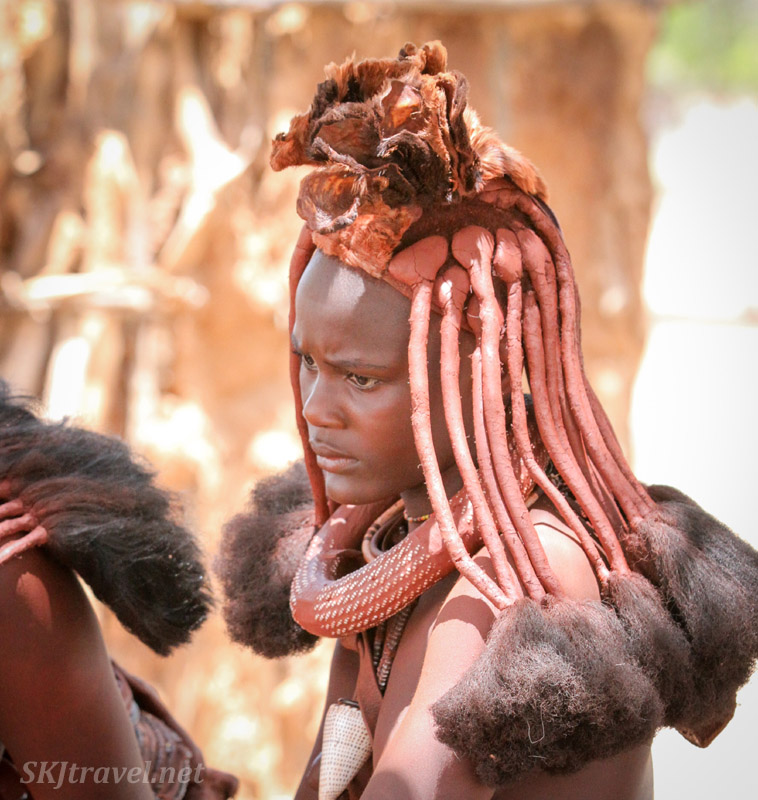 Here are the girls working. Such intricate work, I don't think my fingers could handle so deftly such tiny threads of twine and hair! 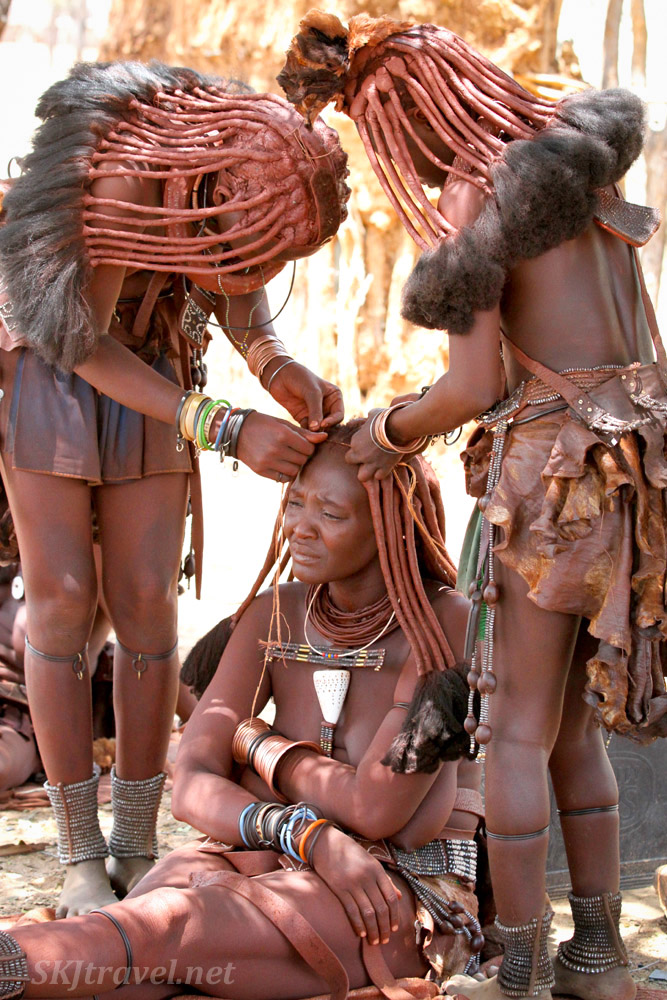 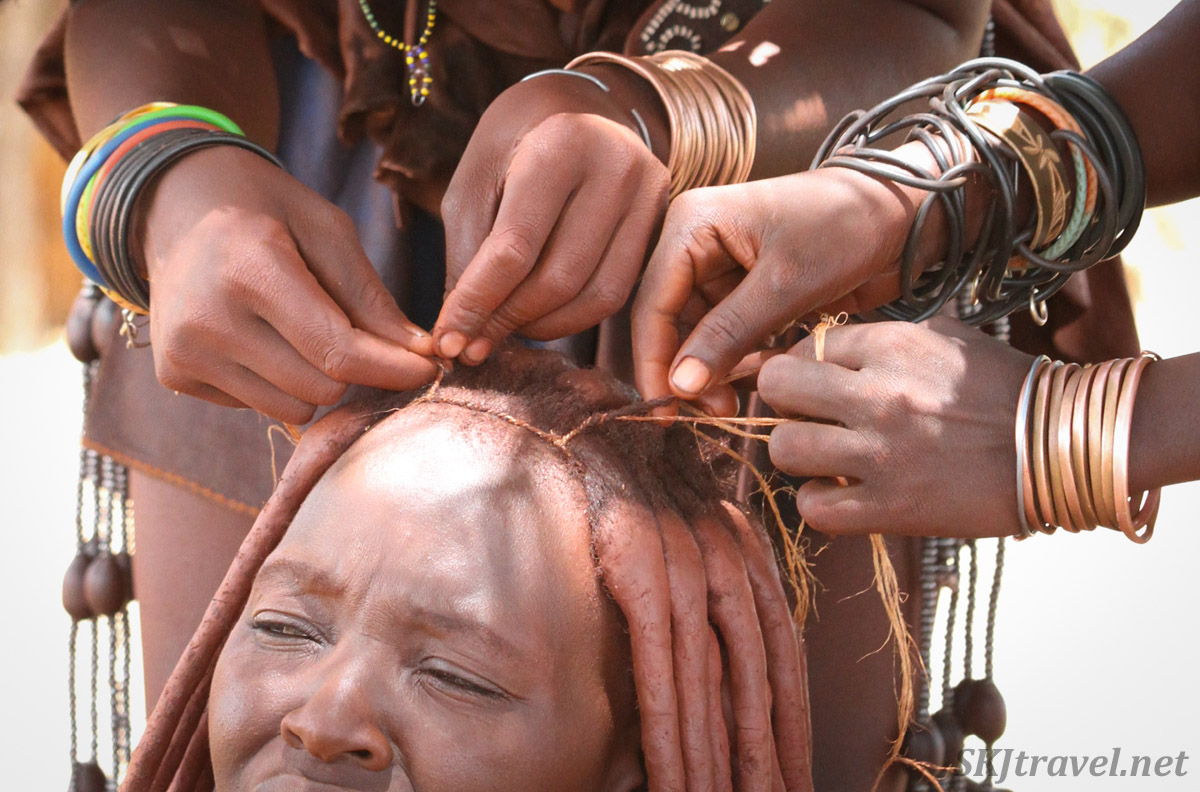 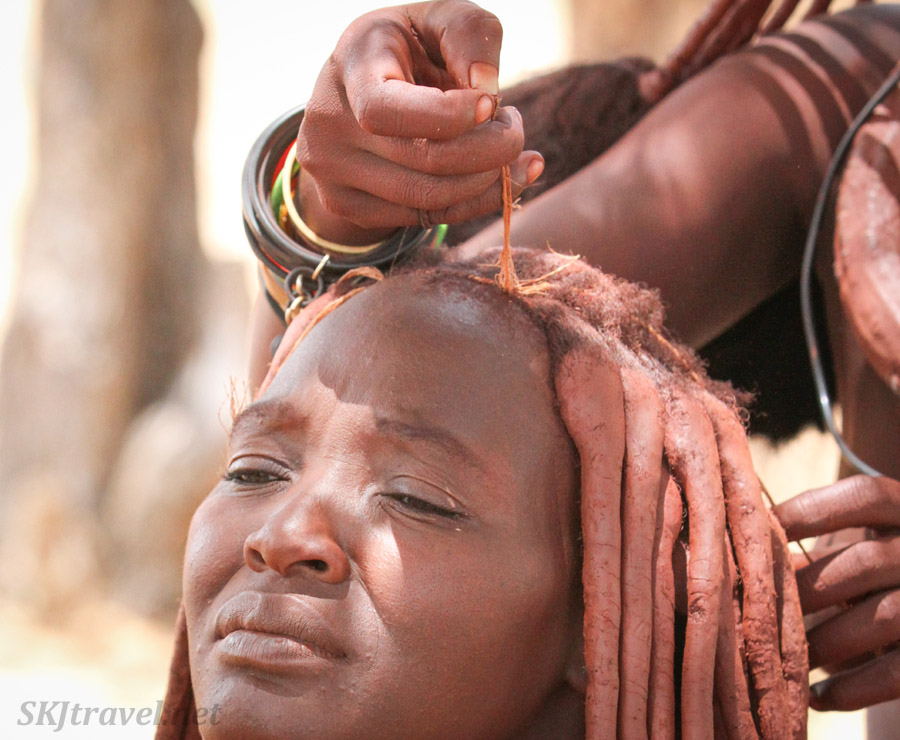 But women aren't the only ones with specially styled hair ... Himba men also have their traditional 'do, which I imagine takes some effort to maintain properly as well. Often they have special form-fitted caps over the braid. 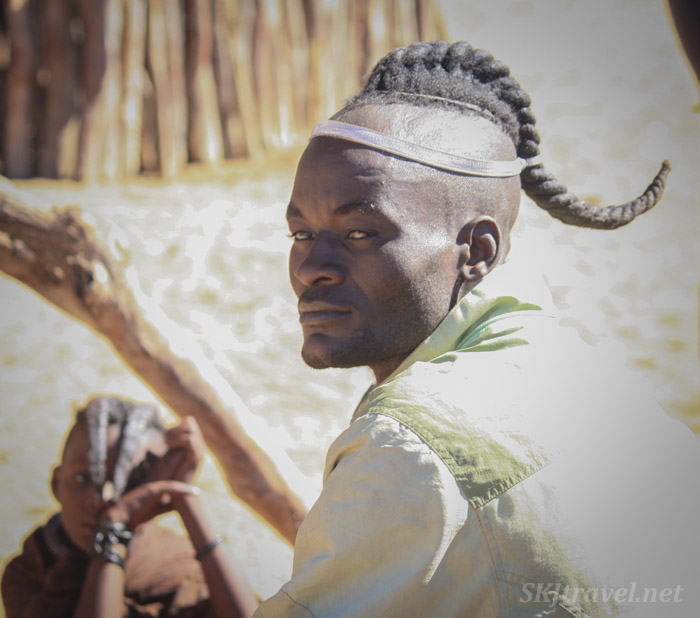 And lastly, this little kid below I think is just so darling with his tiny budding braided ponytail.