I had heard about this relatively obscure, off-the-beaten-track park from a Facebook friend. He had posted a couple photos, and I thought to myself that if I ever found myself in the vicinity, I would have to go check it out. The Paint Mines Interpretive Park is located on the eastern plains of Colorado, pretty much due east of Colorado Springs, near the town of Calhan. It's a small affair and you can see the whole thing at a leisurely, discovery pace in three hours or less. From the highway near it, you would never guess such a magical little world exists a stone's throw away. (well, a pretty strong throw ... a pro in Scottish athletics could maybe manage, haha)

It's a fantastical world of colored clay beds capped in white sandstone. The canyons and the spires and hoodoo formations are relatively small now, but a million years from now, who knows! 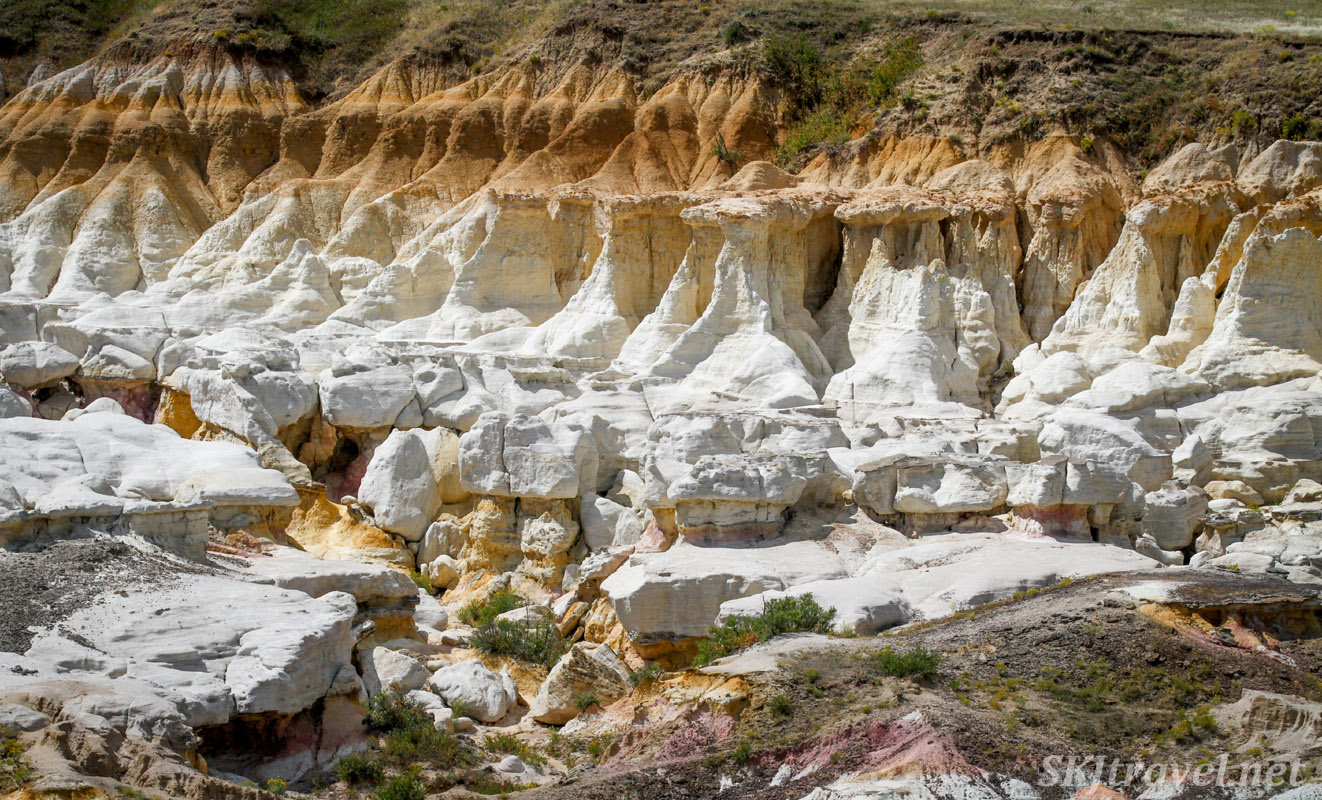 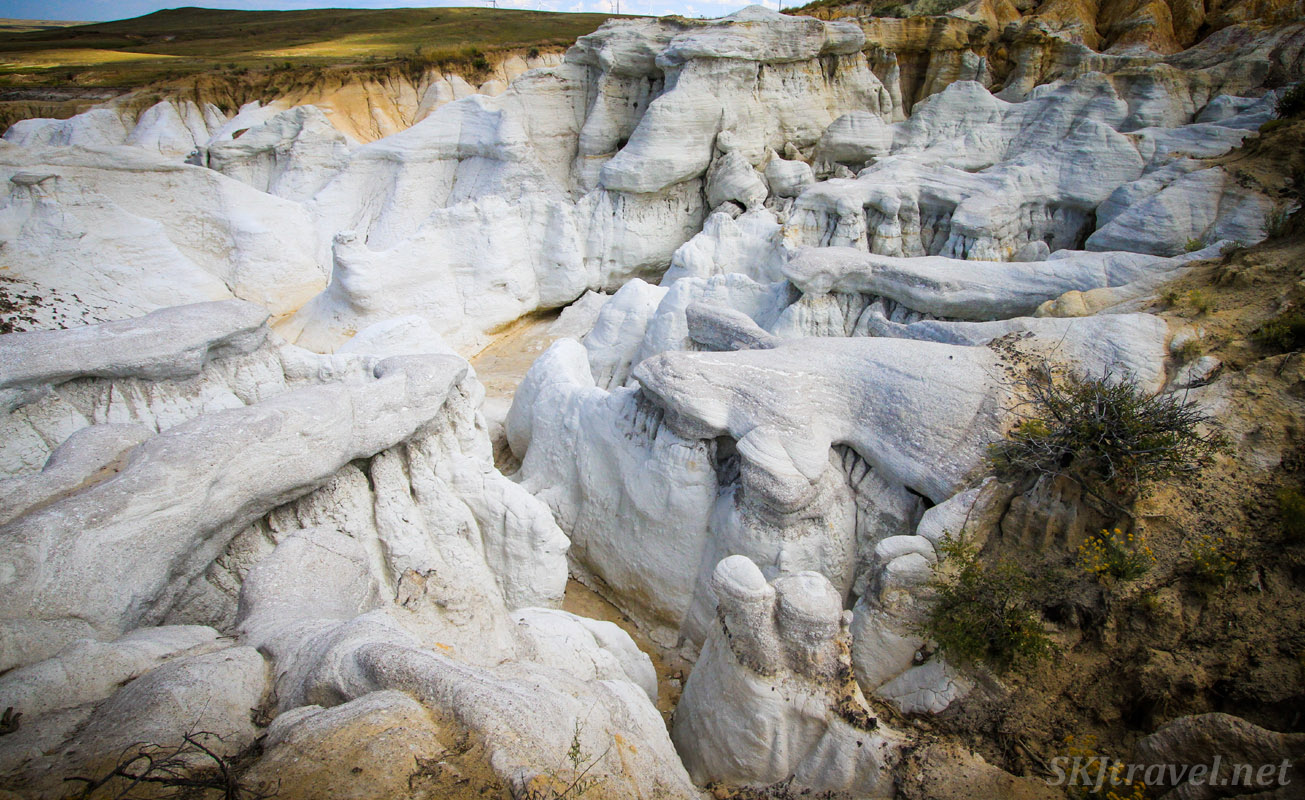 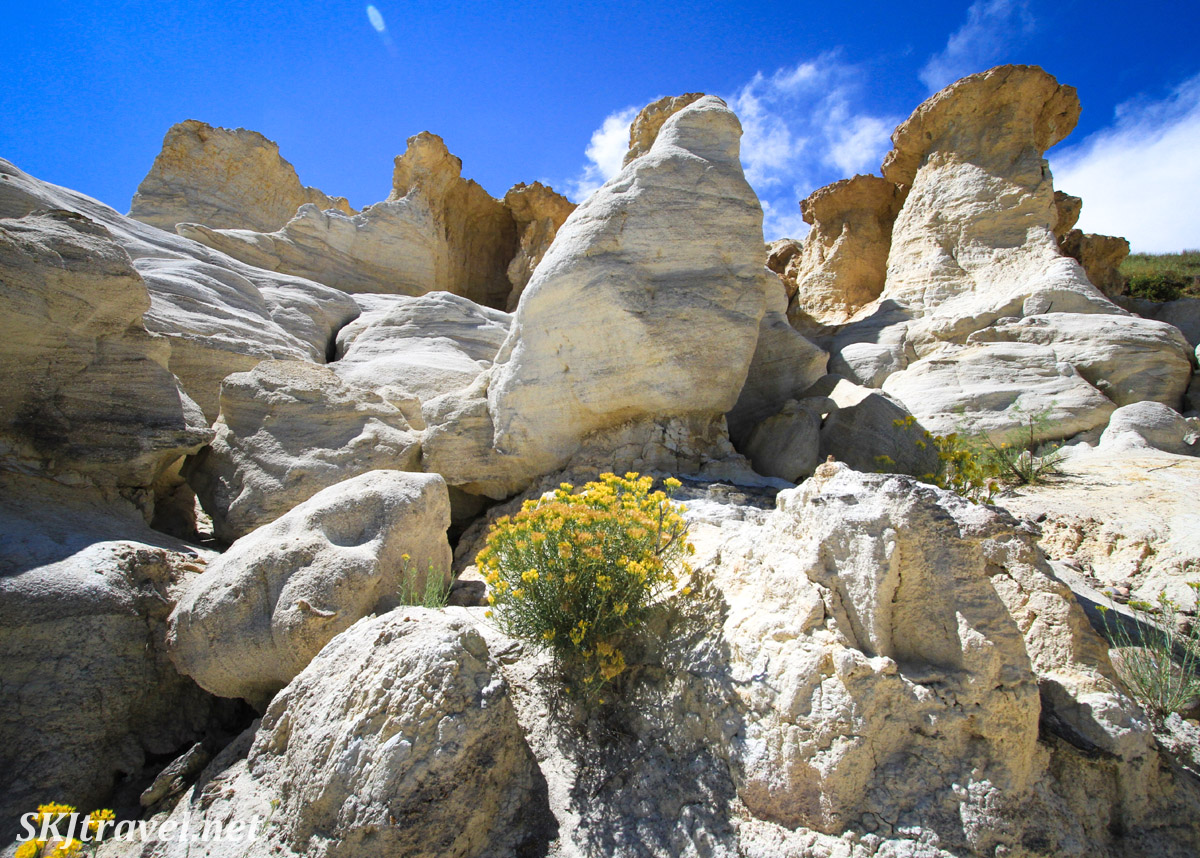 For a sense of scale of most of the formations, here's Erik for a ruler. You may have to look kind of hard to find him in the first pic! 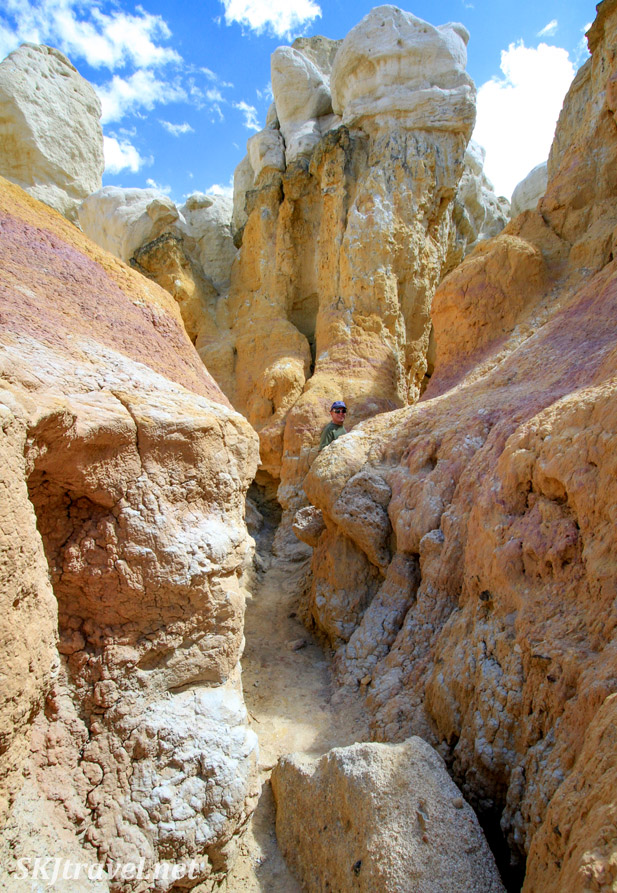 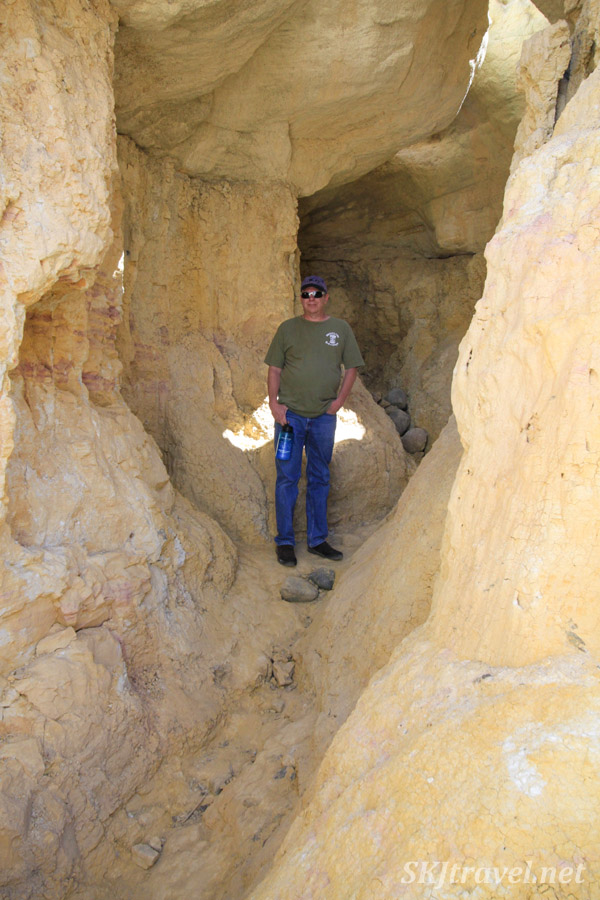 But the super cool  parts are the colored, "painted" rocks of yellow and orange, pinkish-red and purple. It's kind of hard to believe it's natural geology and not actually painted by human beings like some elaborate outdoor art exhibit.  Instead, it's nature's resource that humans have come here to use as a material for color in their own art and craftwork -- mining the paint, so to speak. 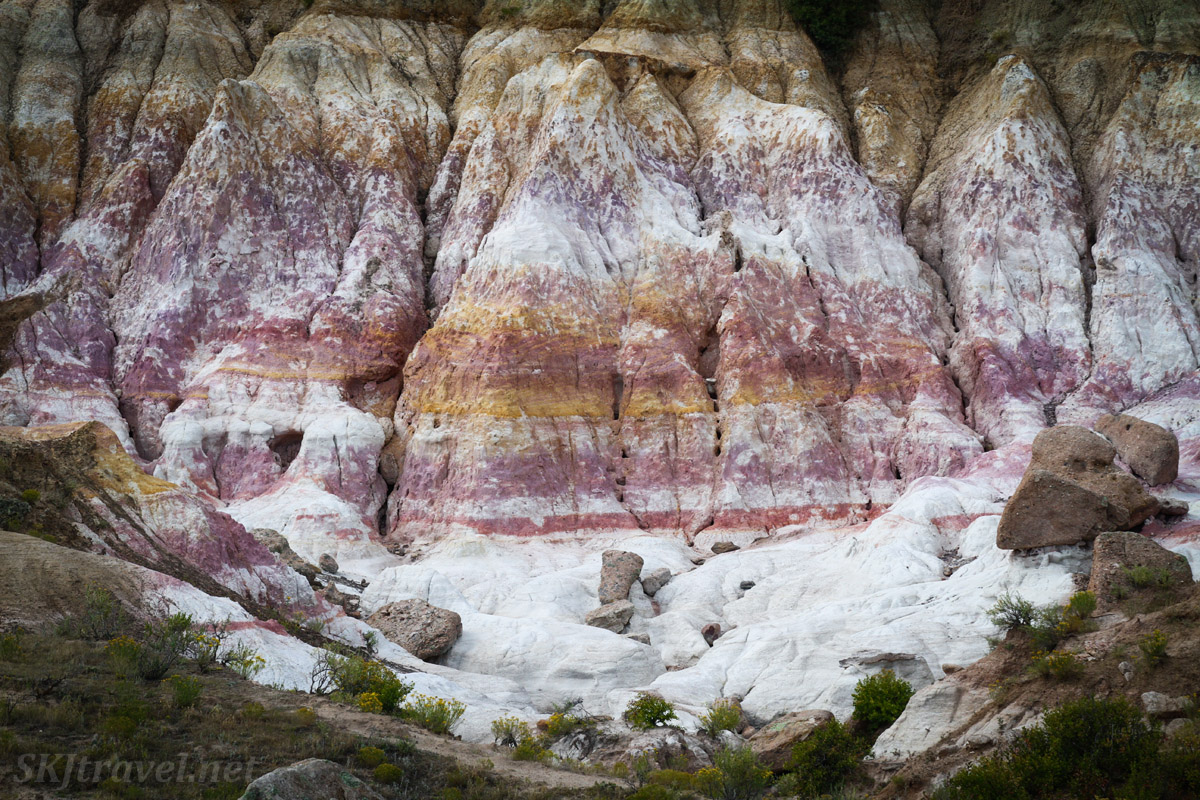 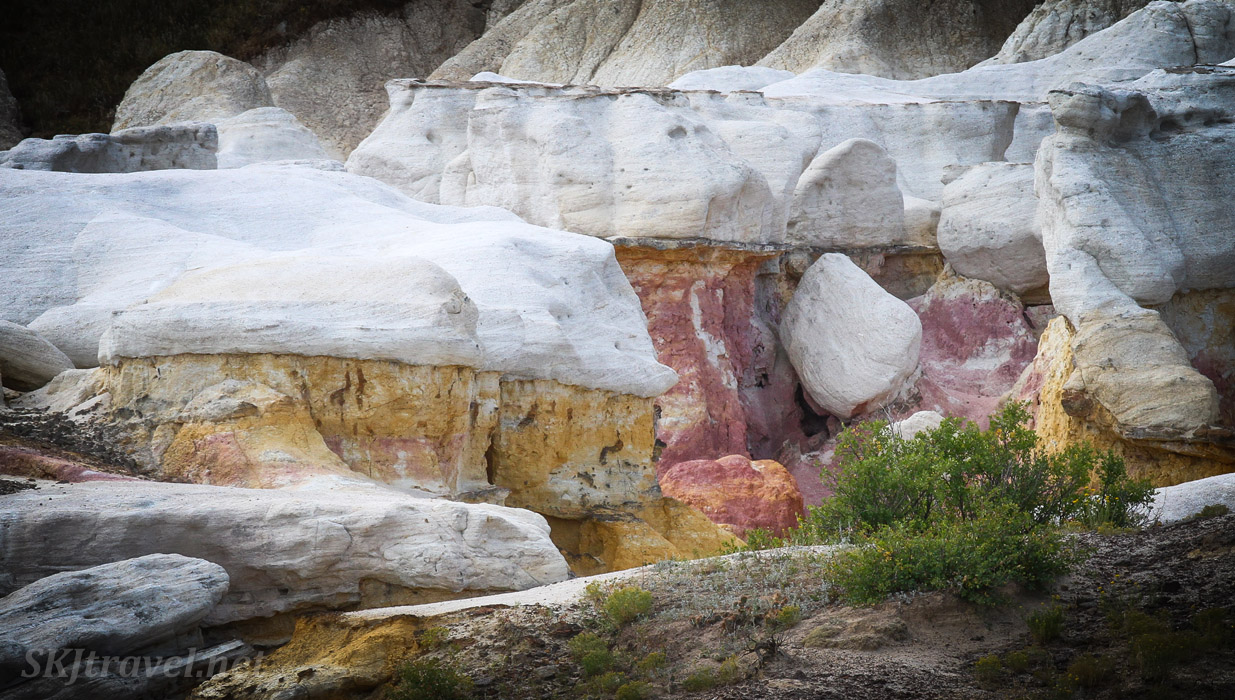 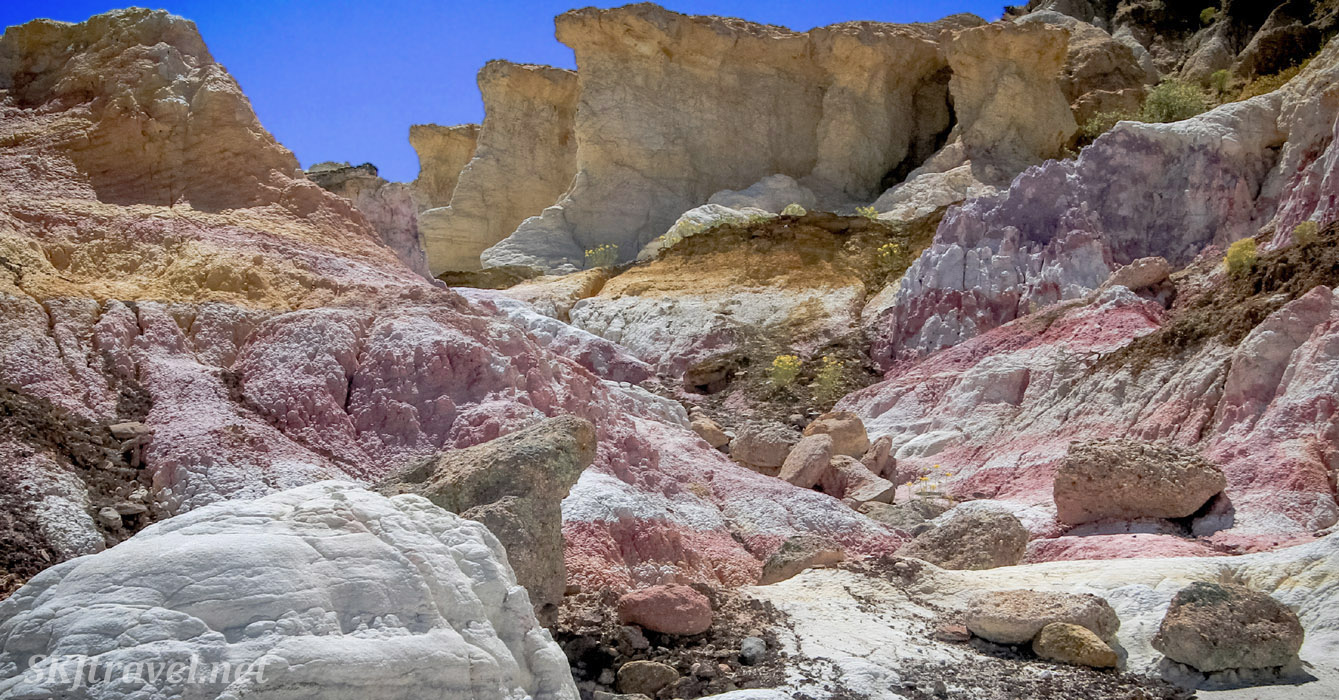 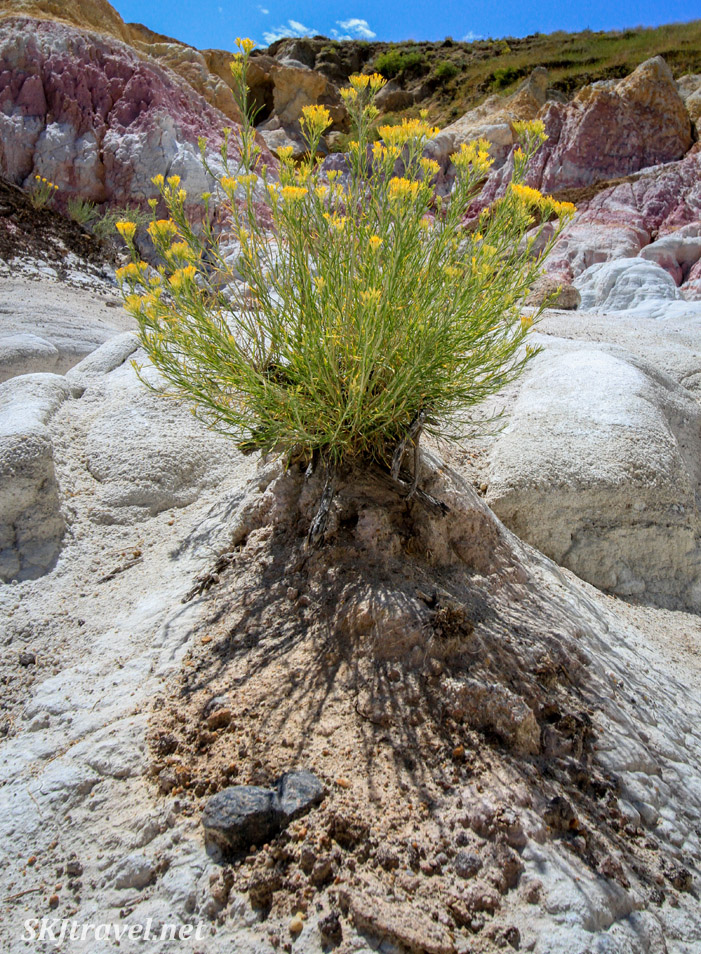 You can walk paths through the formations (if you are respectful, you'll stick to the paths and not climb all over the formations, as the park regualtions request). And I really thought this was a special brand of fun, exploring whimsical nature, imaginative nature. I know that I often refer to Mother Nature's exceptional imagination, but really, she knocked herself out on this one. 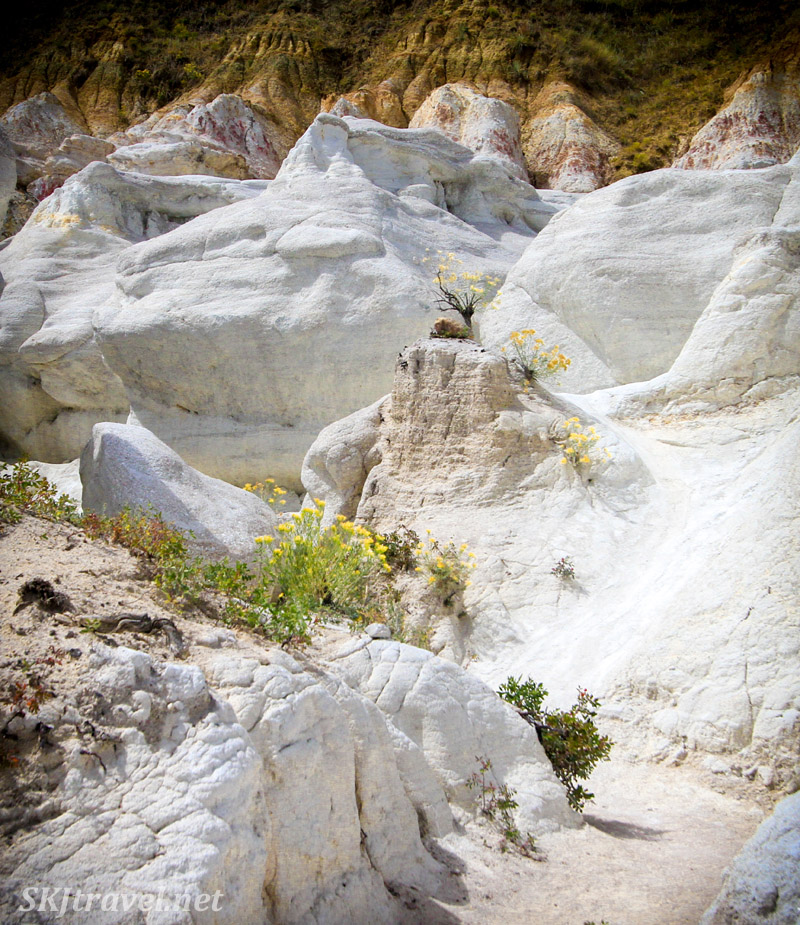 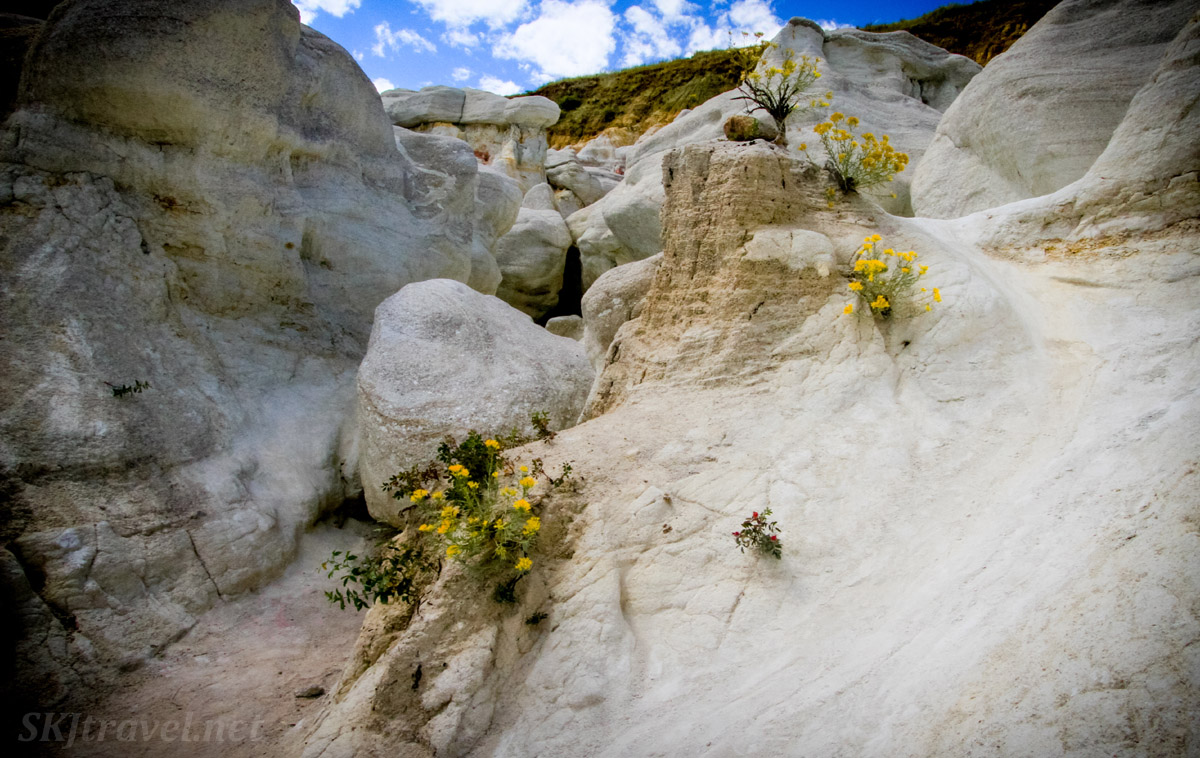 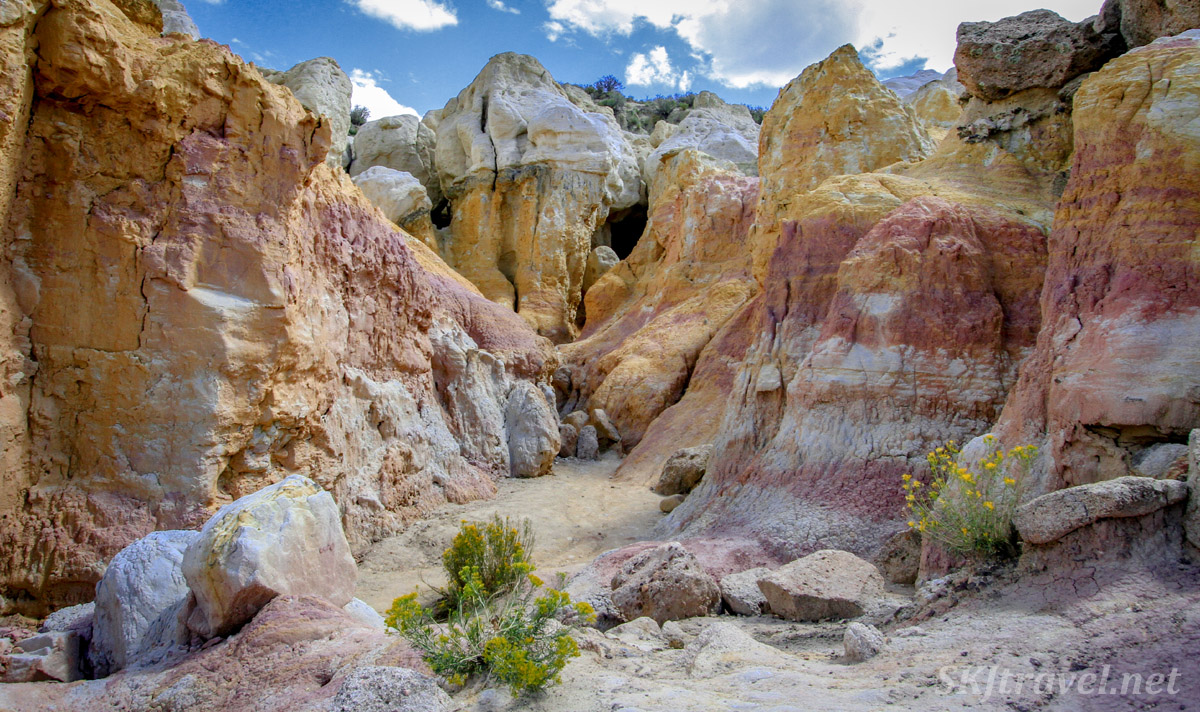 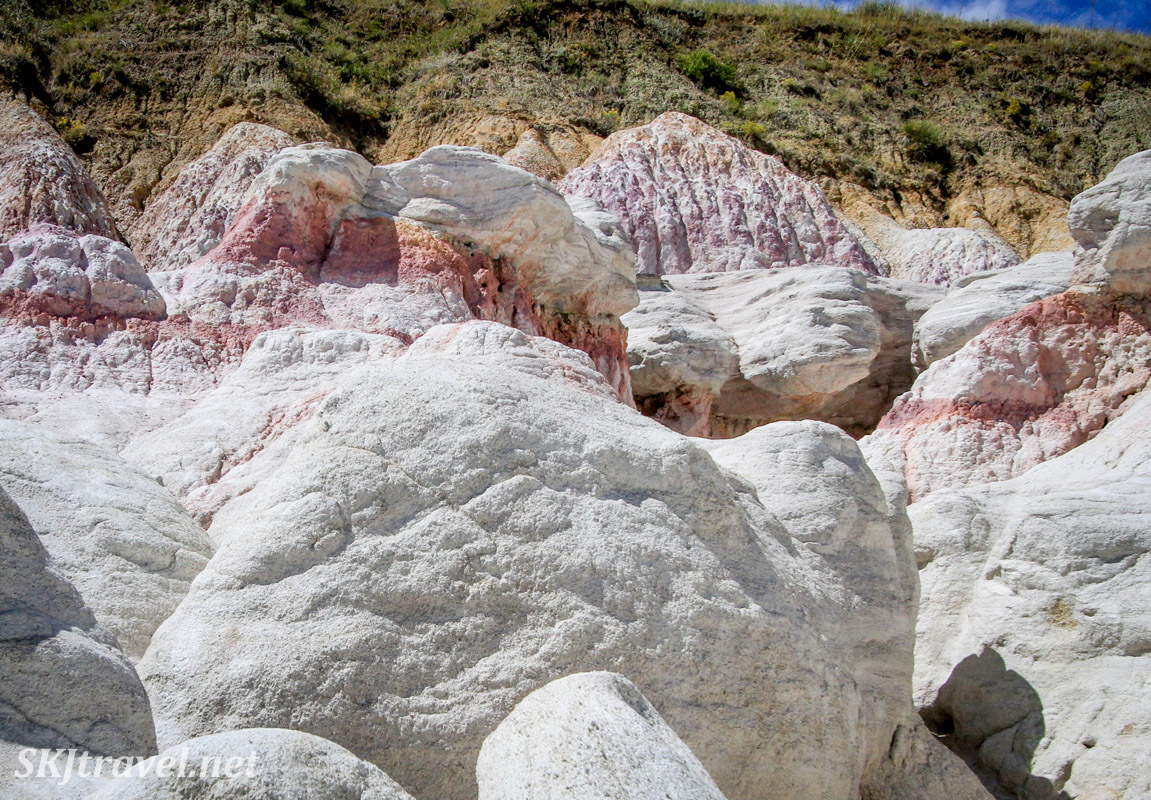 Here's what HistoryColorado.org has to say about the paint mines:  "Archaeological investigation, funded through a State Historical Fund grant, has substantiated prehistoric and historic American Indian occupation as evidenced by the finding of stone dart tips, arrow heads, and petrified wood used in tool manufacturing.  The local clay was mined for use in ceremonial paint as well as pottery making.  A homestead site within the boundary confirms the use of the property by Euro-American settlers in the 1800’s.  The significance of the site has led to the designation of the Calhan Paint Mines Archaeological District by the National Park Service.  Used by hikers, birdwatchers and as an outdoor laboratory by geology students, the site has come under the protection of the El Paso County Parks Department."

A close-up view of erosion starting to take place beneath the white sandstone cap ... a miniature world from a lavish dream. Or from a Dali dream! 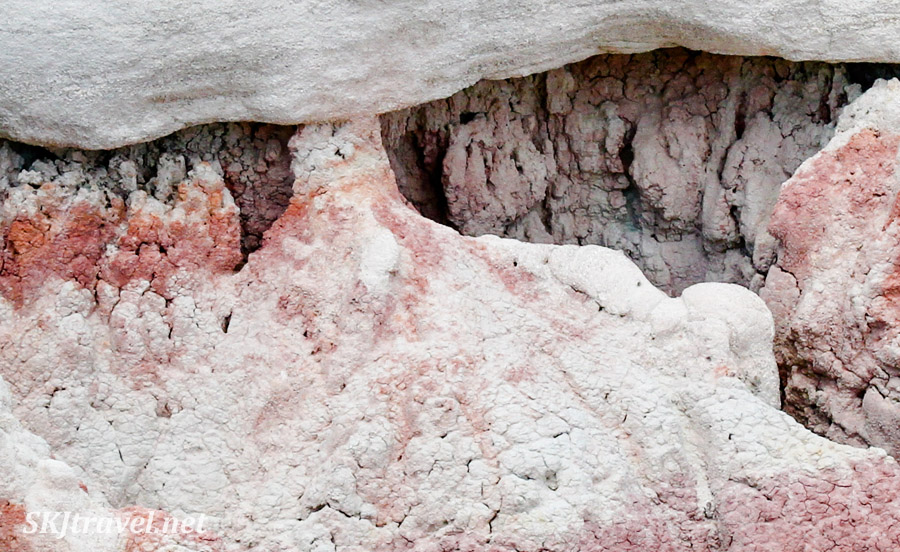 On the high ground above the mines (which have eroded from the land surface downward), there's a large wind farm. One can easily see why they chose that location, as there was a strong and steady breeze throughout our visit. They looked a bit majestic up there. Hopefully this little bird flying near was smart enough to stay clear! (he's between the pole and lower-right blade) 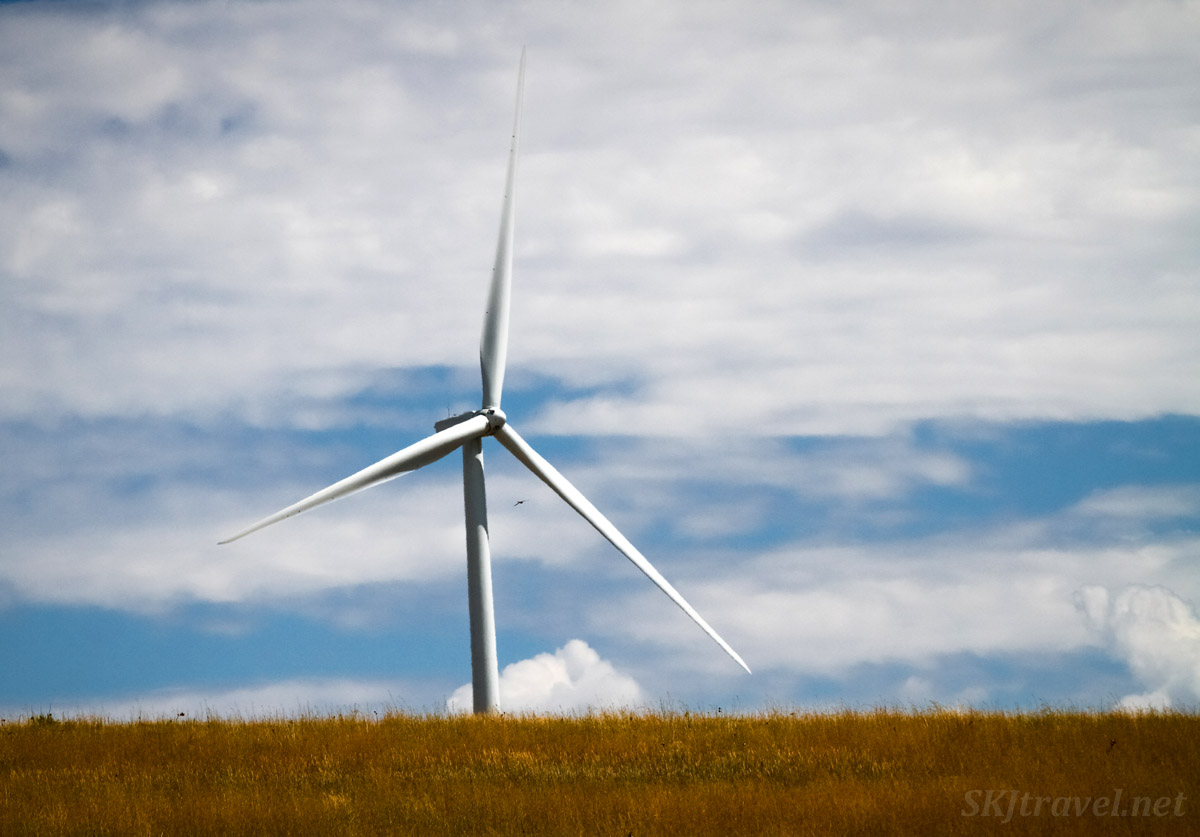 I've certainly never seen anything quite like this park in my life. I was truly enchanted. And we had a few critters for company, too! 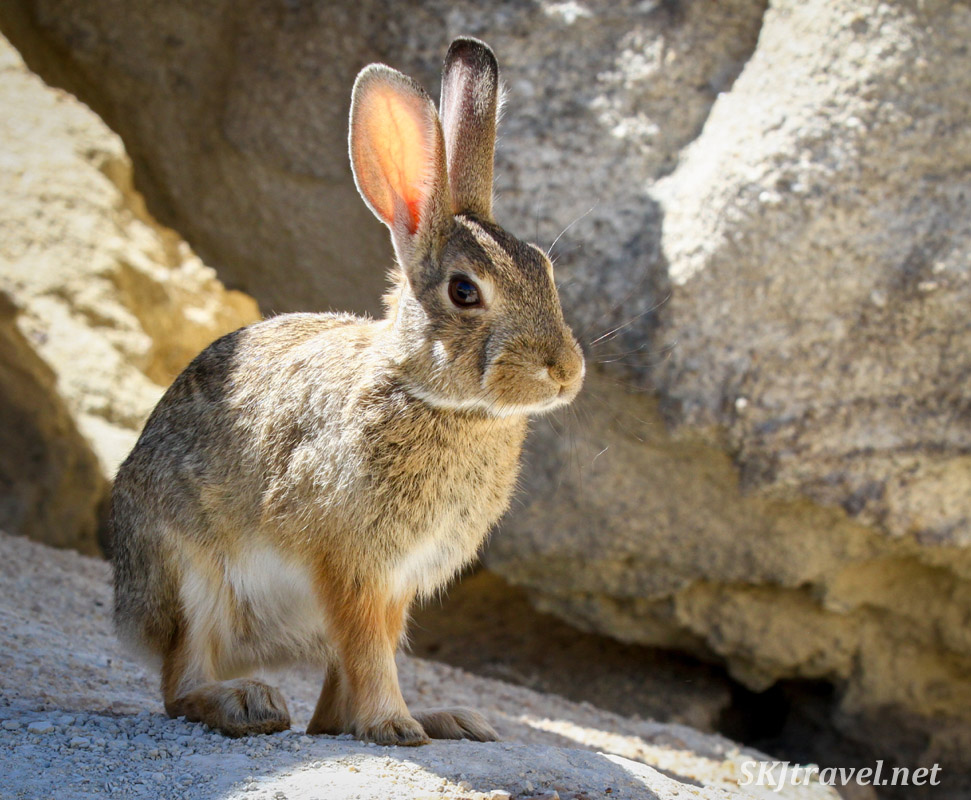 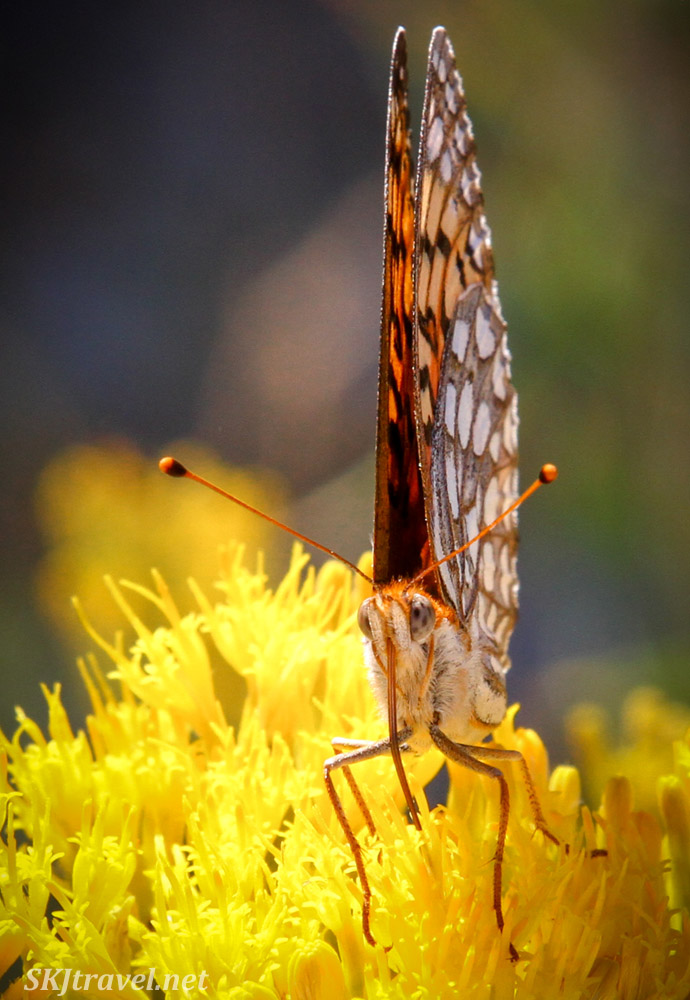 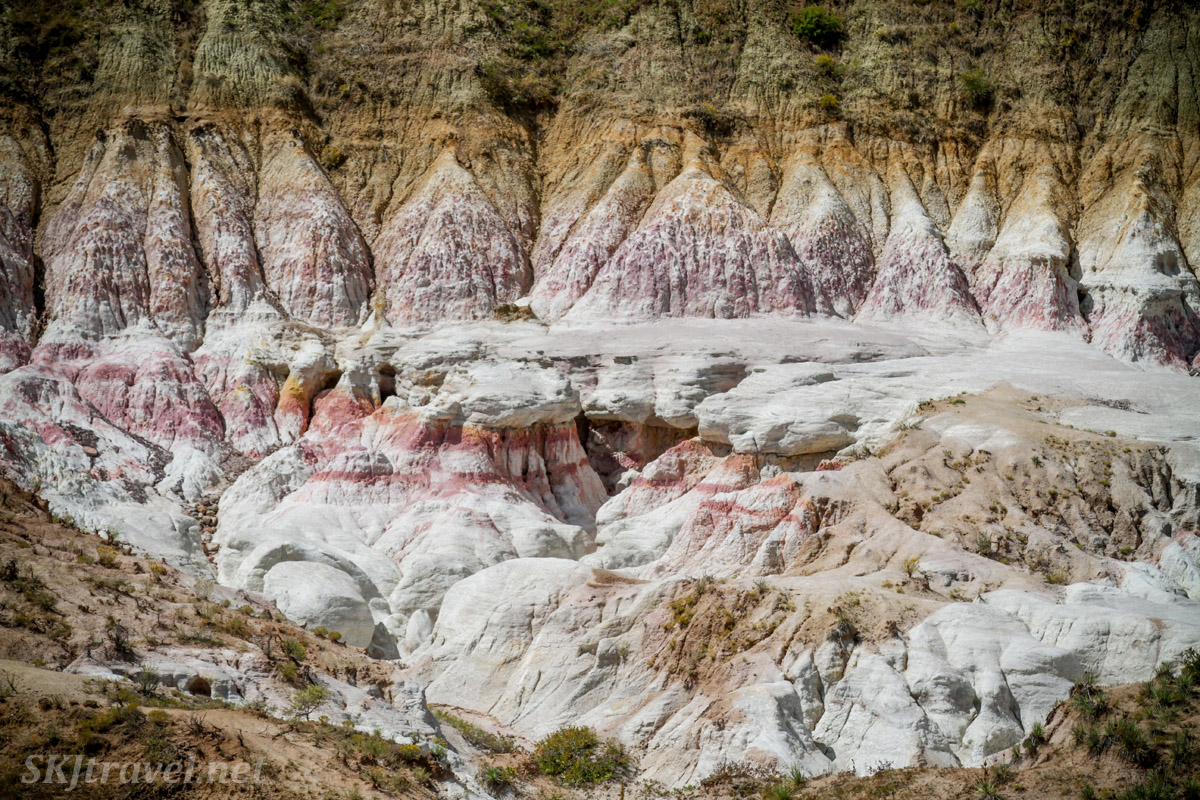