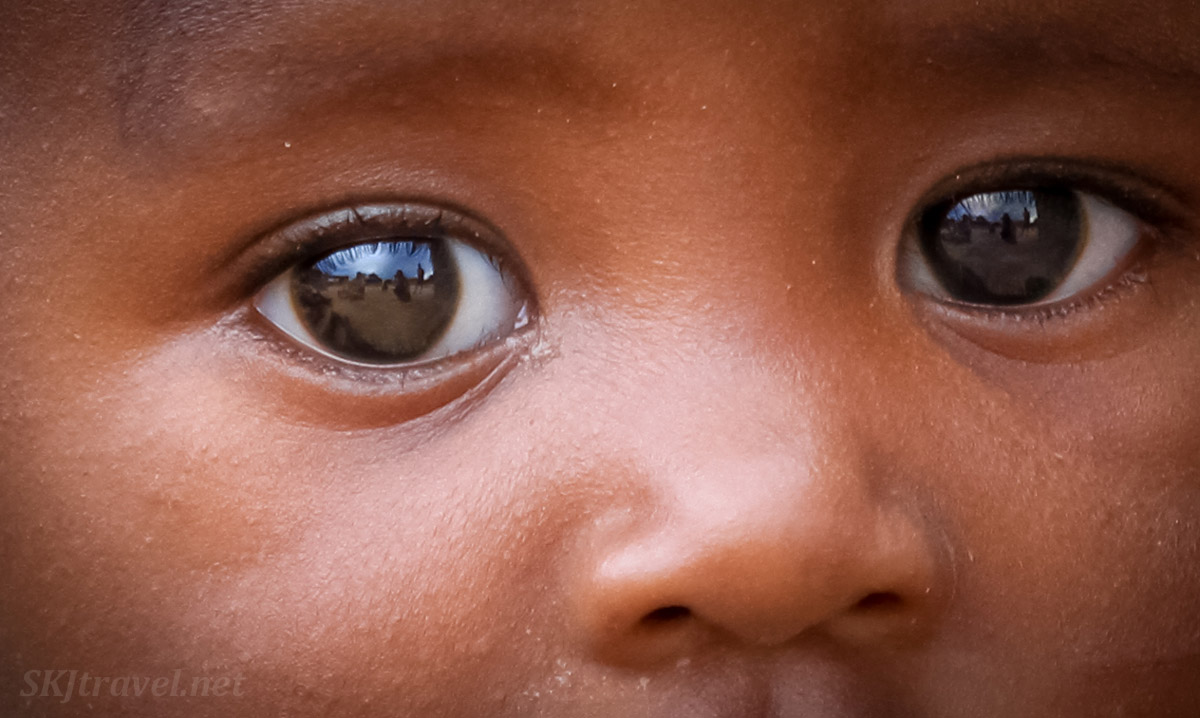 Above, the film crew of "African Witchfinder" and I are reflected in the eyes of a toddler in the Kavango.

"If this is Part 1, how many parts will there be?" you wonder. But I don't know the answer to that! There are a lot of people shots from this trip that I'm quite fond of that don't really have a home in any of the articles about witchcraft, and so like the Roadside Views post, I'm just collecting a bunch into a "Faces of Namibia" series in order to share them. (some have been featured as a Friday Photo) However, I haven't found any real themes to select them by. So if you are looking for some reason why these particular photos are together in this particular post, there is none. The theme of this photo essay (and subsequent parts) is simply, "Shara's favorites." As I'm leaving soon for Antarctica, it may be some time before the other parts appear here, but they will come!

So where to begin? Or rather, who to begin with? Well, for absolutely no particular reason, we'll start here, in the Kunene region of Kaokoland, Namibia. A Himba girl and two of her boy mates. The girls traditionally wear two braids that hang down the front of their face. This girl was always chewing on a string whenever I saw her. I eventually realized that she has it tied to her necklace, so it is always available! 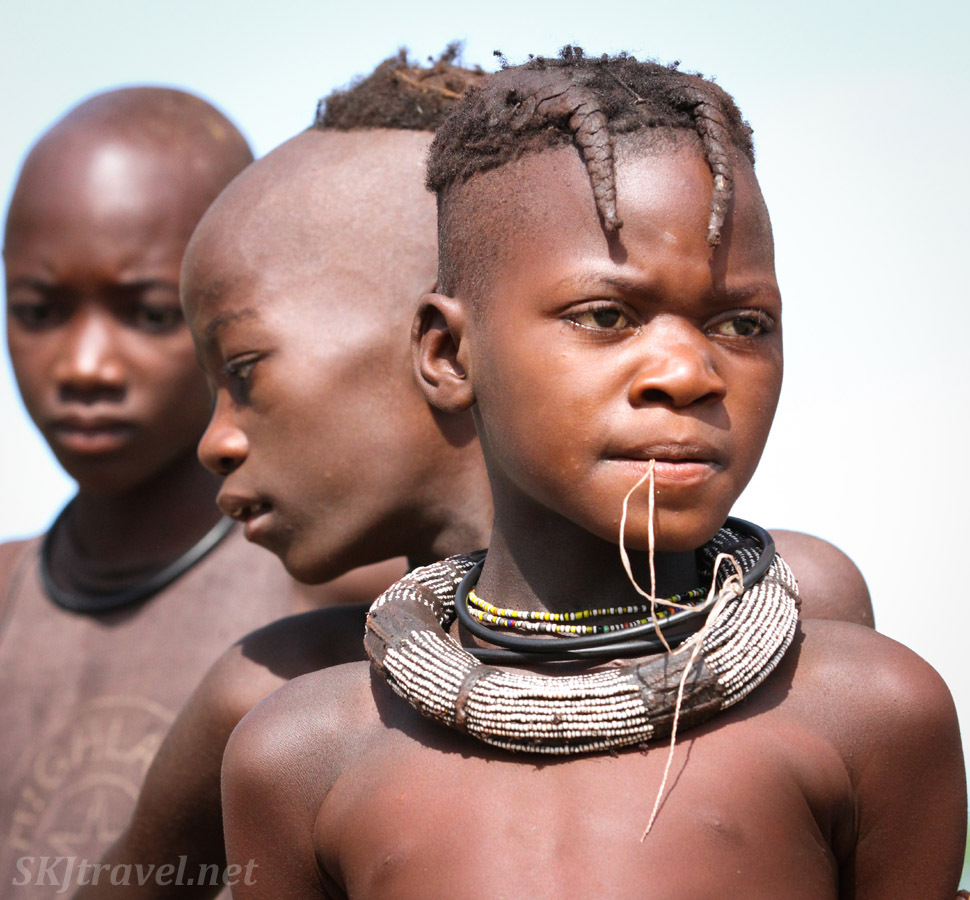 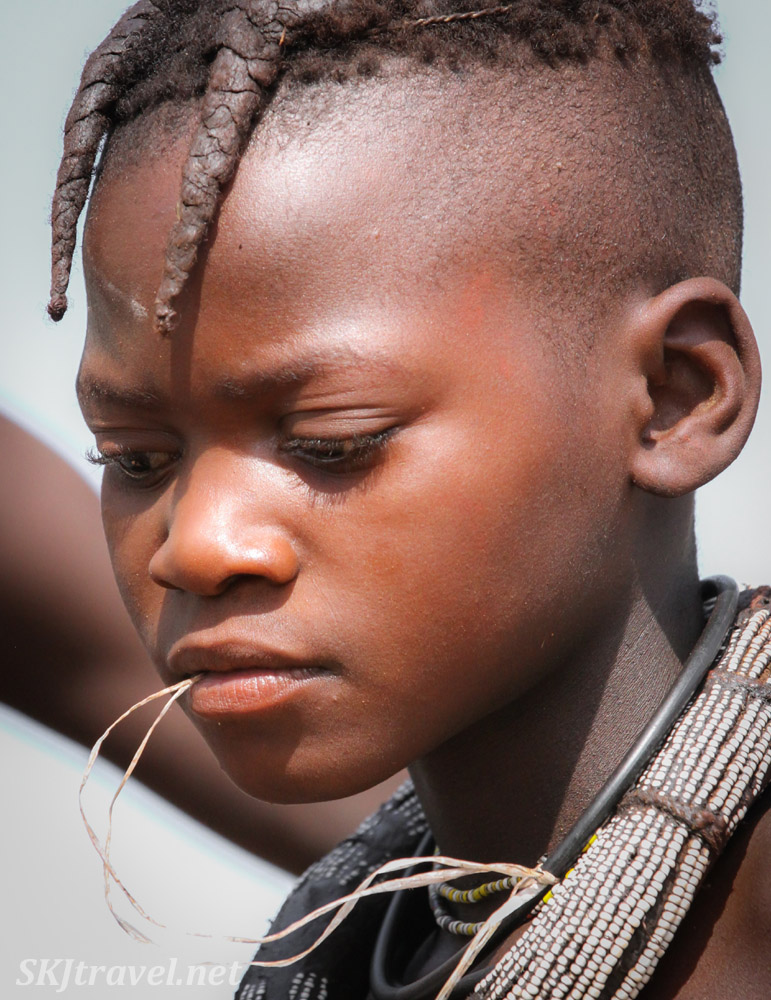 She seemed a very kind soul. I saw her always playing with young children and toddlers or else leading around a blind man with a stick. In the relatively slow-paced life of the traditional Himba, people have the time to look after one another. I love the picture below of the three of them. To me, it looks like they're about to start out on a grand adventure, three companions. 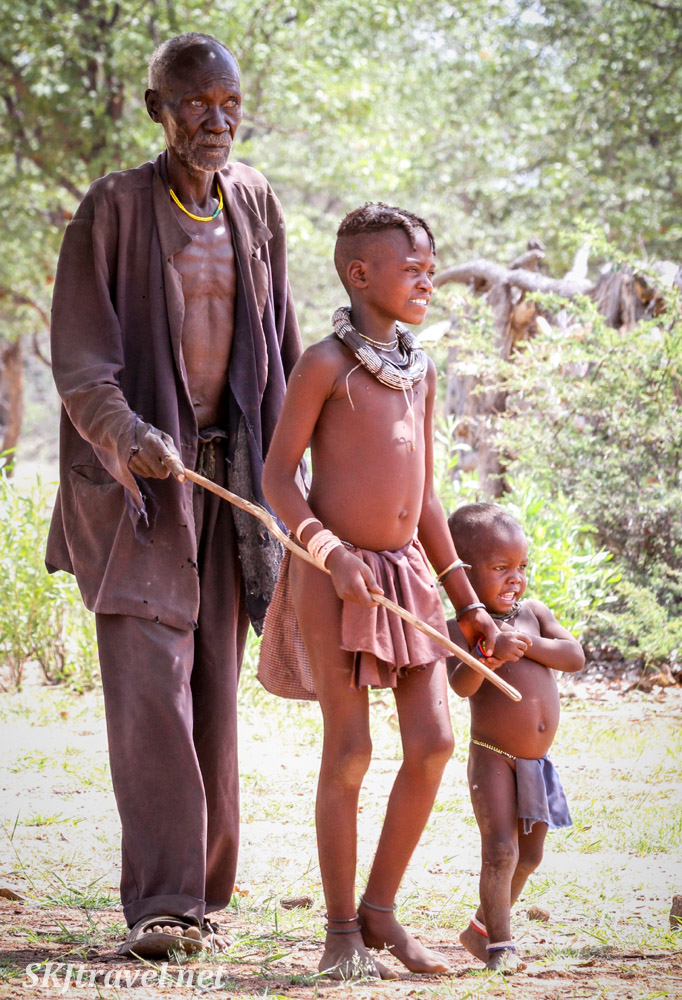 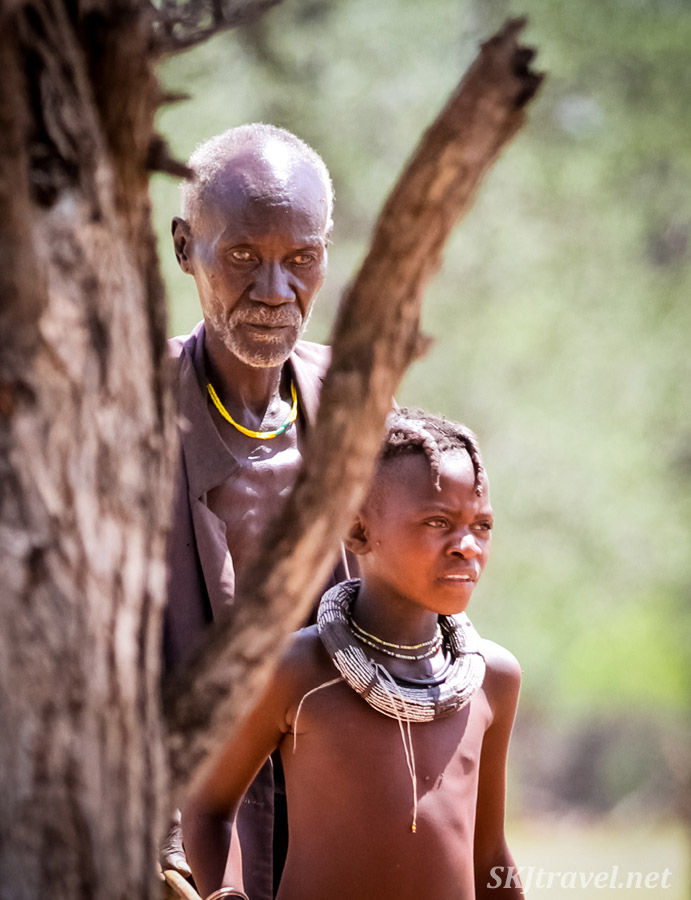 The blind man wasn't ostracized in any way for his incapacity. There were always children playing around him, sitting in his lap and leading him so he could be where other people were gathered. I think he has a stunning, wonderful face. He must still be able to see basic shapes and figures through his cataracts, for he knew I was there and taking his picture. 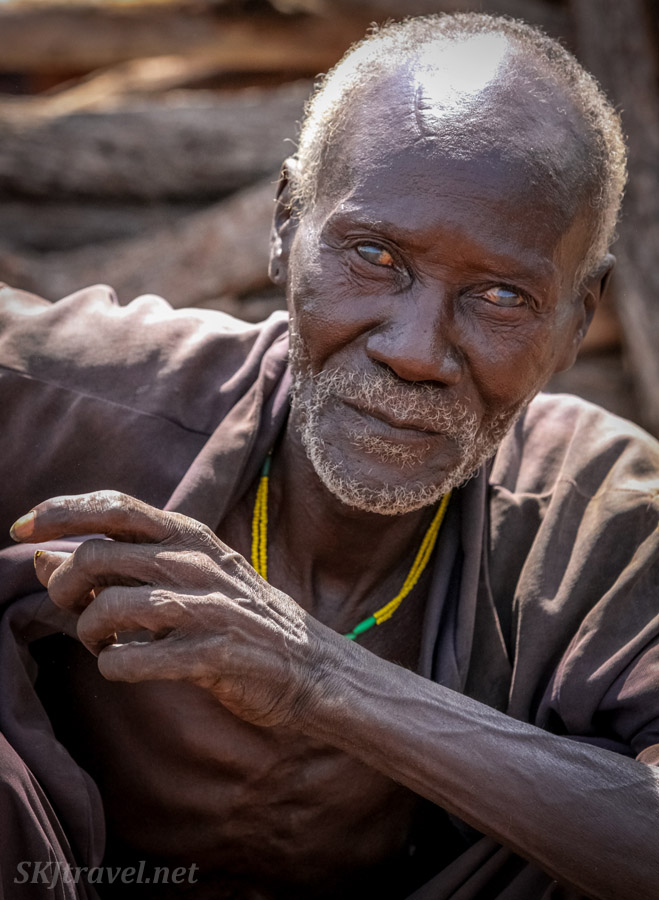 Here's a closer look at the traditional hairstyle of adolescent Himba girls with two profiles. 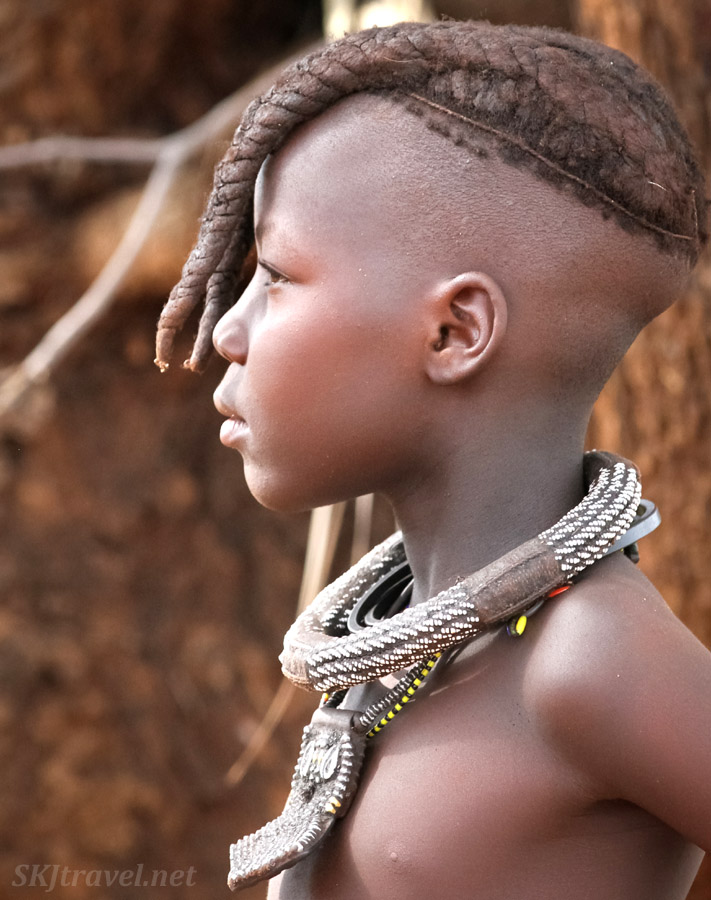 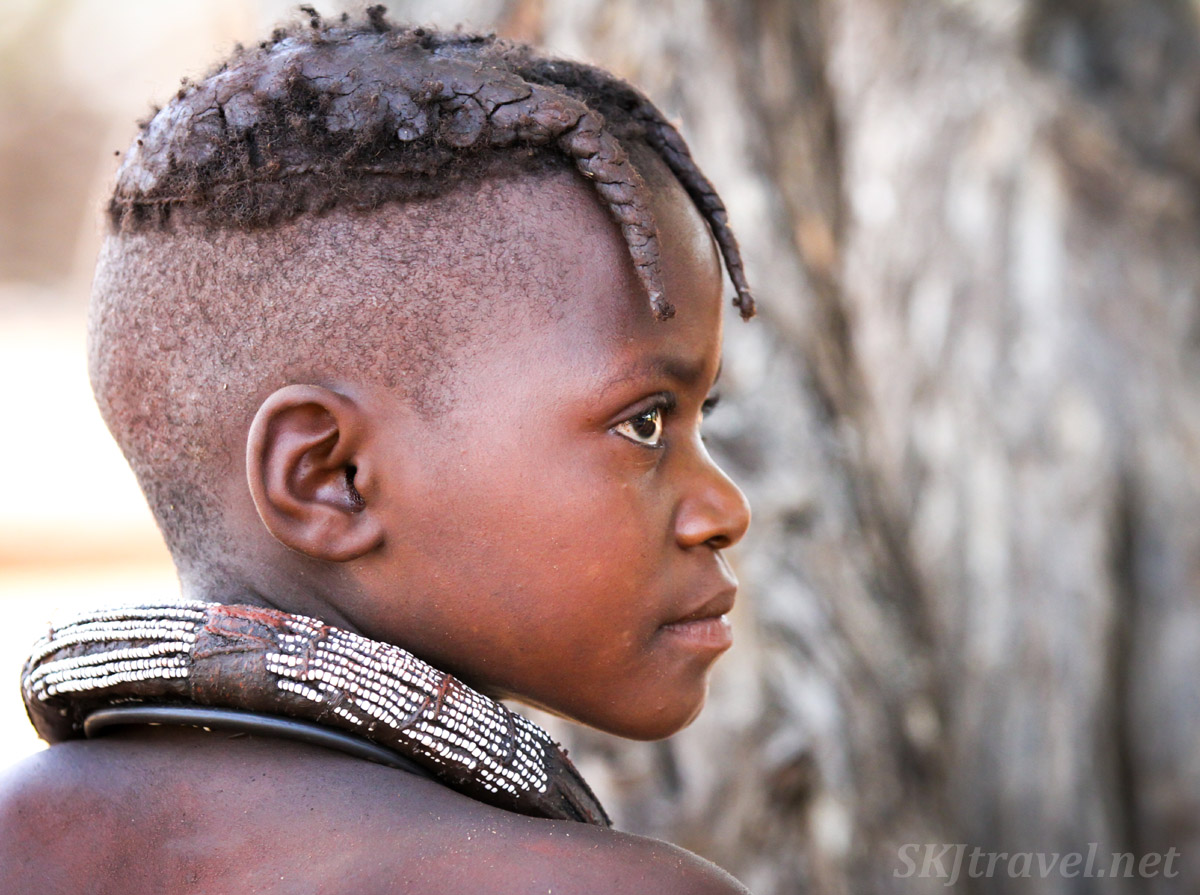 And eventually they will wear a head full of red mud-packed braids when they are young women, displayed for us here by Princess Kaviruru bent over working on her mother's hair. 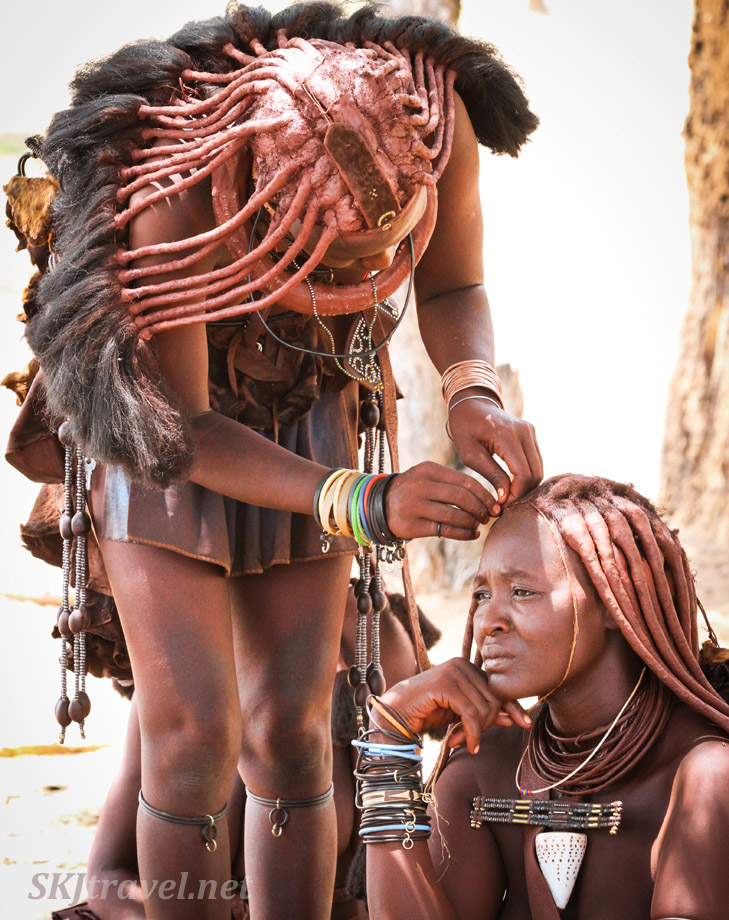 And then when the girls are married, they will design their own head piece such as this one below, sported by a young woman just recently married. (In the photo above, Uvuzerwa, the princess's mother, has her headpiece pushed back so her daughter can work on her hair line.) I think this must surely be something that girls dream about their whole lives, sketching the stiff cowhide head pieces in their mind, similar to American girls dreaming about their wedding dress, envisioning what it will look like. 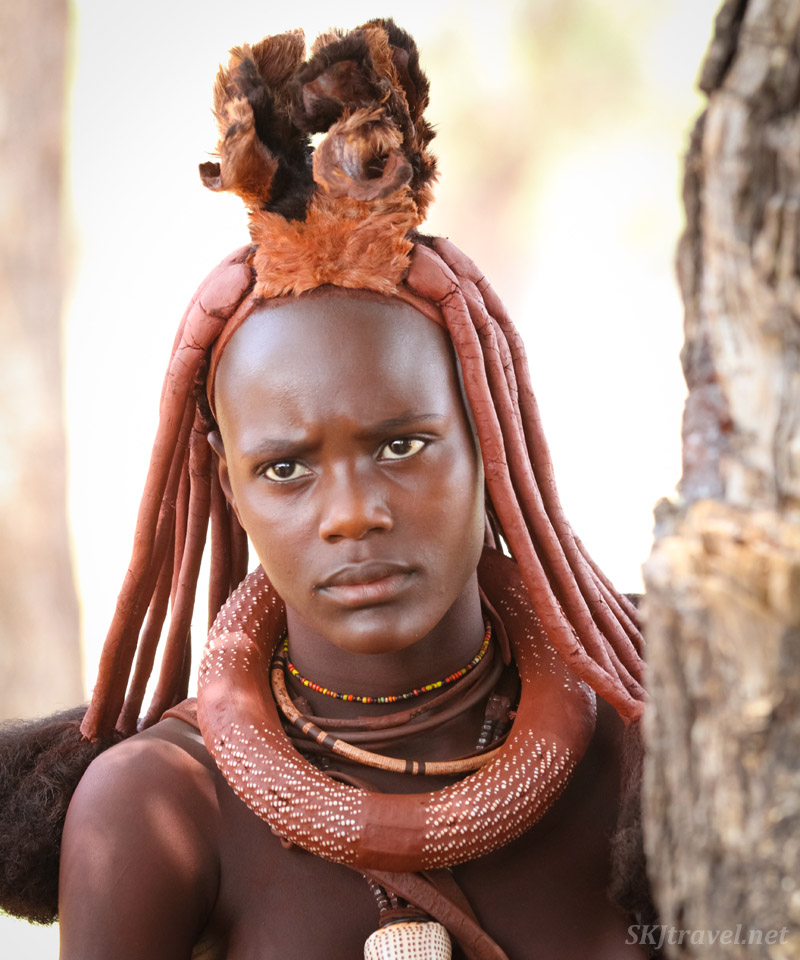 Of course, children are always the most fun to watch and train a camera on. One thing I've come to realize about myself, through this trip especially, is that I'm not really a portrait photographer. Maybe you could even say I'm not really a photographer, but a documenter. My photos aren't necessarily hang-on-the-wall pictures, but simply slices of the life and scenery I see around me. When I take a picture, I'm not thinking about how it will look as a final product, I'm thinking how sharing it will inform somebody else or entertain them, give them a glimpse into the world that I see. For that reason, I seldom corral people in front my lens, I seldom ask them to look at me and smile. Occasionally, sure, but mostly I sit with my finger on the shutter button and wait to see who or what comes to me. I let people make their own expressions and gestures, arrange themselves if they're in a group. Sometimes I sit as if I were part of the landscape, like just another tree, so that people forget about me, forget I'm there and do their own thing.

These two toddlers in particular amused me endlessly. They were pals. Of course the traditional Himba here in Kaokoland have no iPads, iPods or iPhones, no talking toys with battery-powered flashing lights and bells, no stuffed animals or Barbie dolls, yet they are never bored. They have fingers and toes, sticks and stones, and the entire natural world around them. And of course, the number one favorite toy across the globe for both people and cats ... cardboard boxes!! 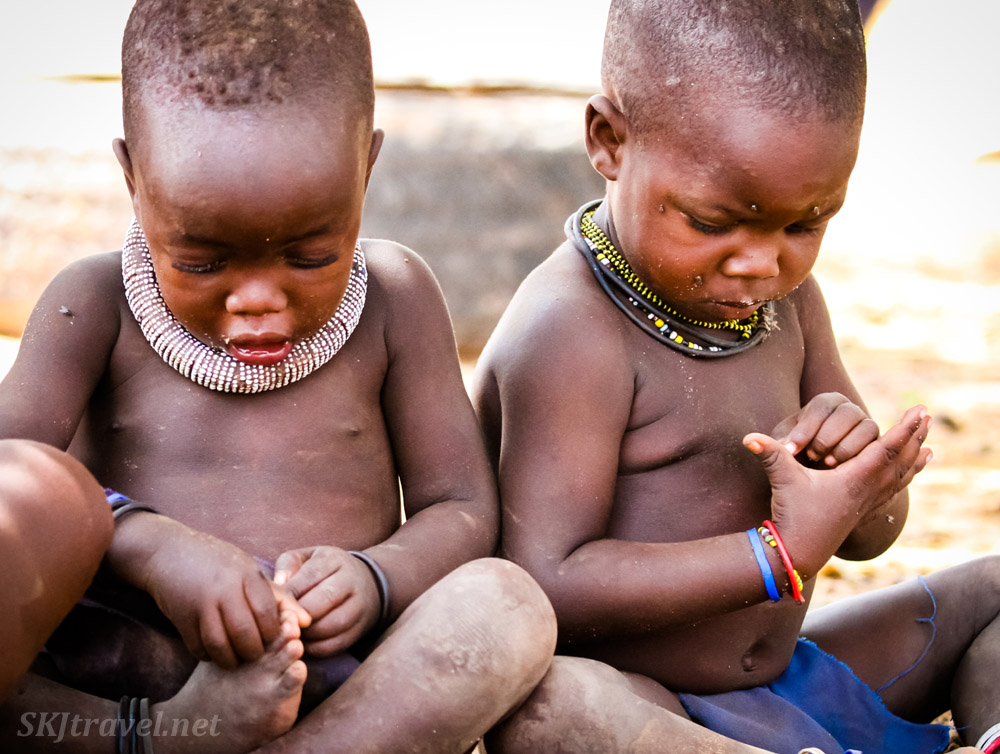 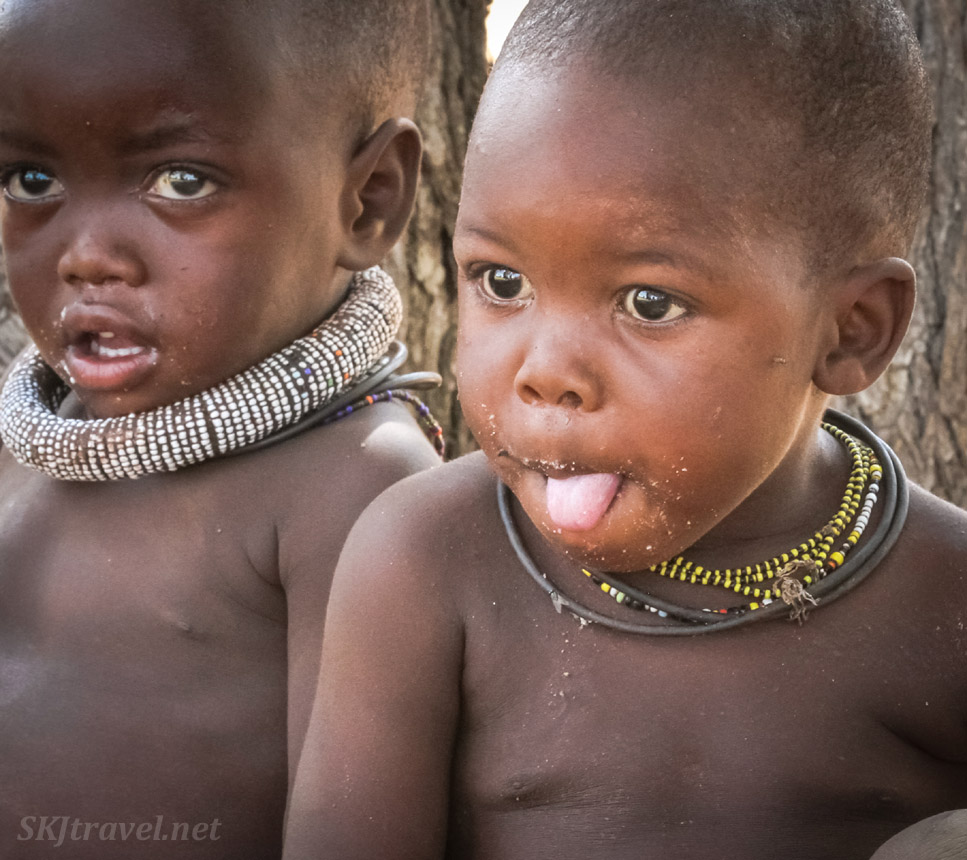 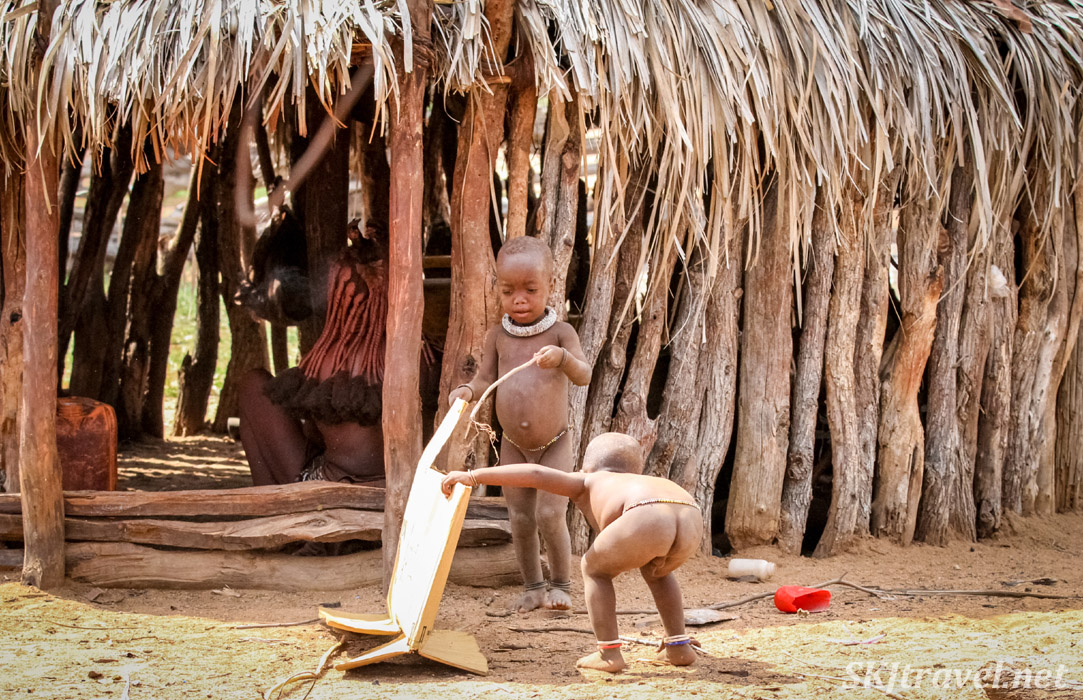 Here's a more colorful gang of kids from the Caprivi Strip region, near Divundu. The first day I met them, they weren't entirely sure what to do in front of a camera lens. Unlike the traditional Himba in the Kaokoland area who are used to tourists passing through and taking their photos, these kids were just kids in a courtyard of some people we were interviewing for "The African Witchfinder." They certainly had never had white people peering at them through a camera lens. They caught on quickly what to do ... smile! It's pretty cute that the kid on the far left of both pics is wearing the same shirt each day, but the second day, he's wearing it turned inside out and backward. 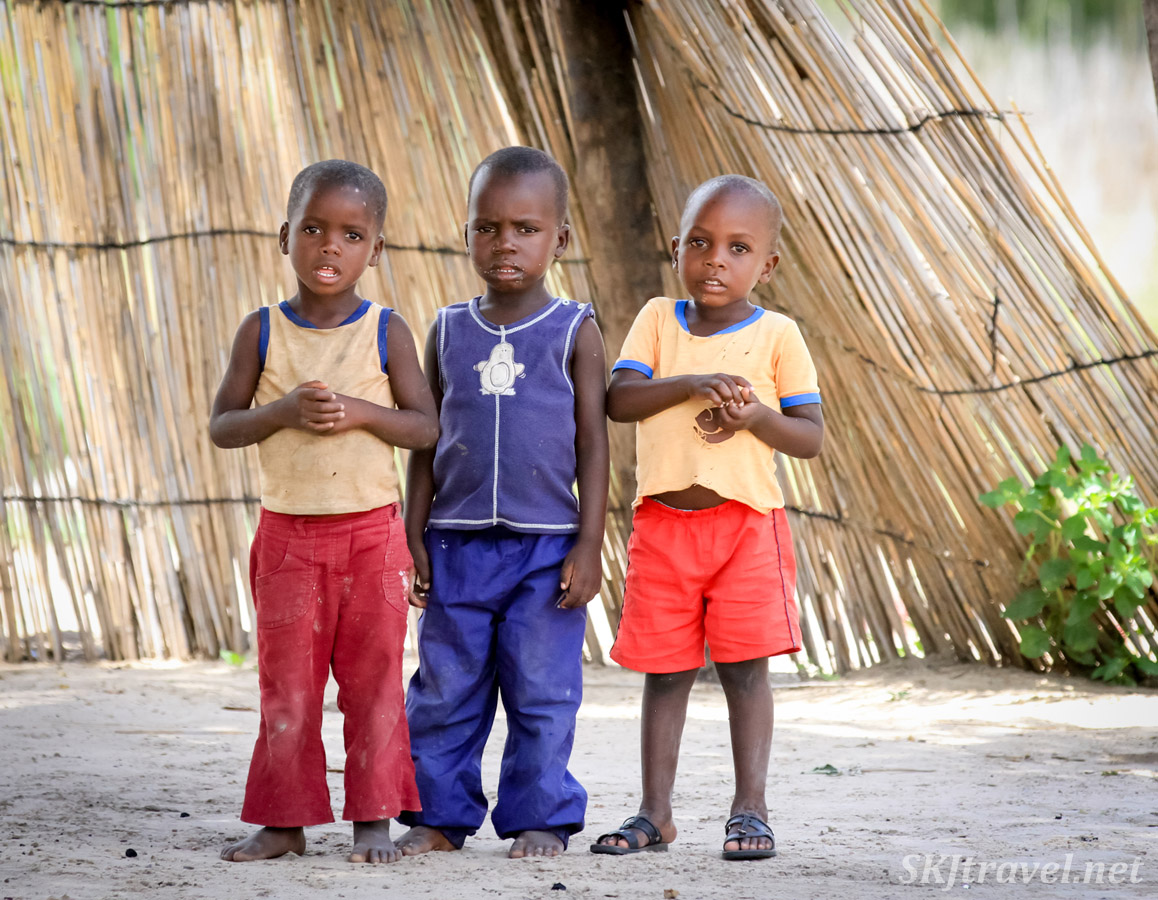 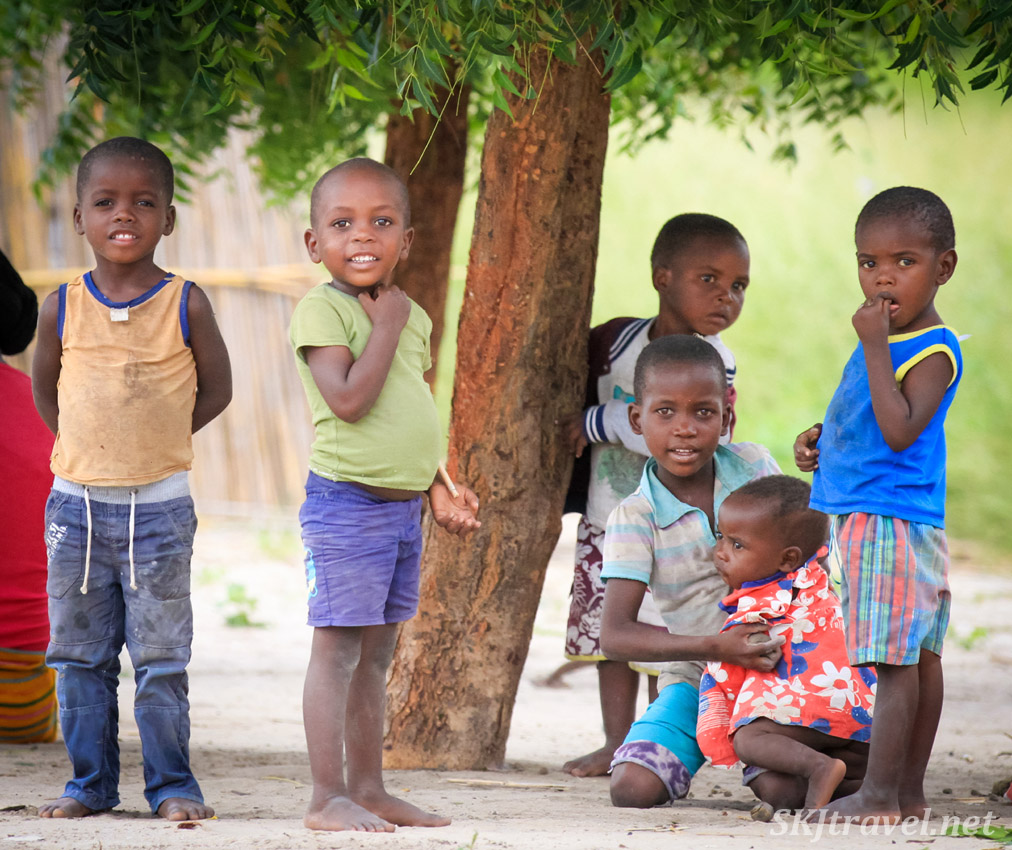 Some more shy kids, perfectly adorable in their shyness. 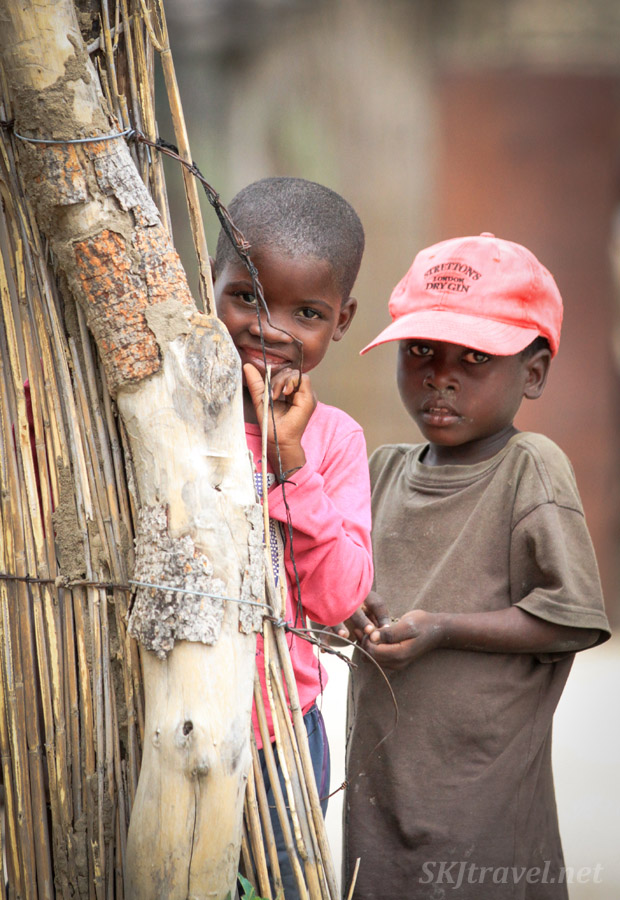 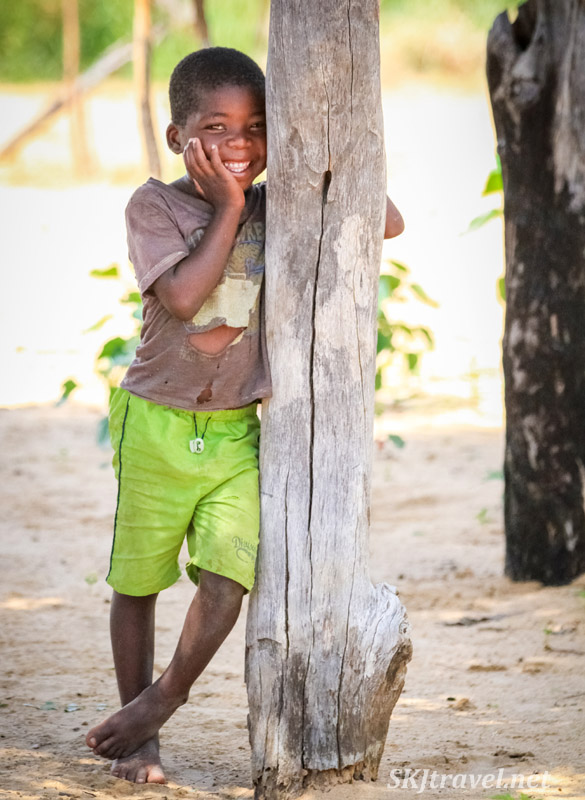 This duo is a mix. The girl in blue almost pretty sure that she wants to smile, while her pink mate has all the charm of a natural model. 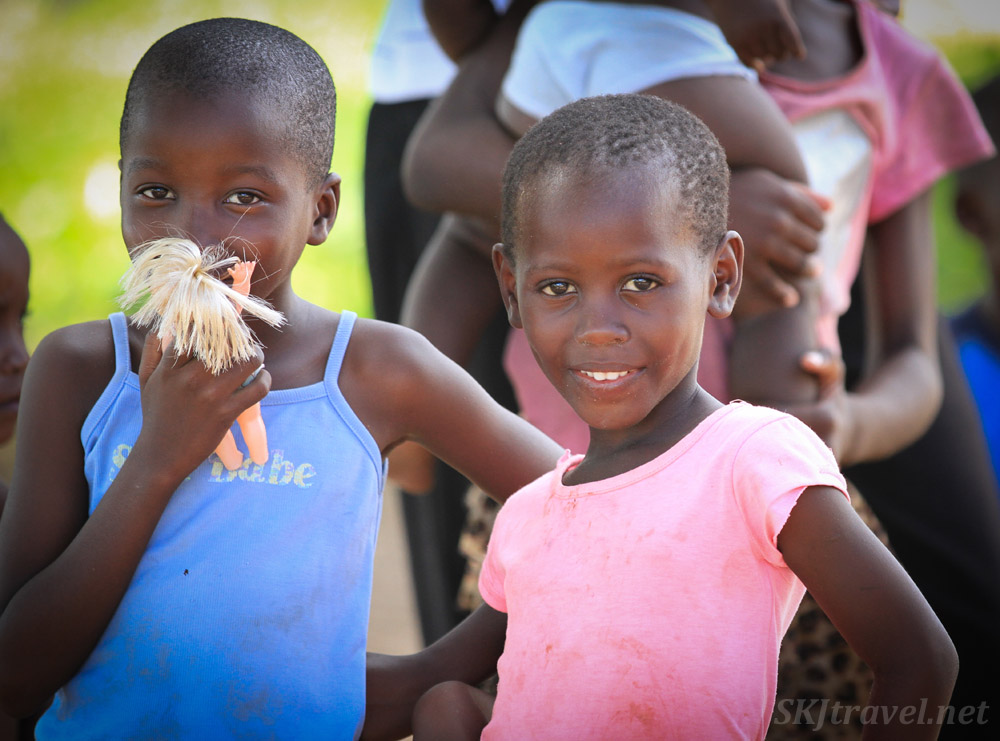 I'm madly fond of this little girl in her sweet red dress -- her coy smile and kind of peculiar hairstyle ... not sure if it's simply unkempt or if there is some design behind it. 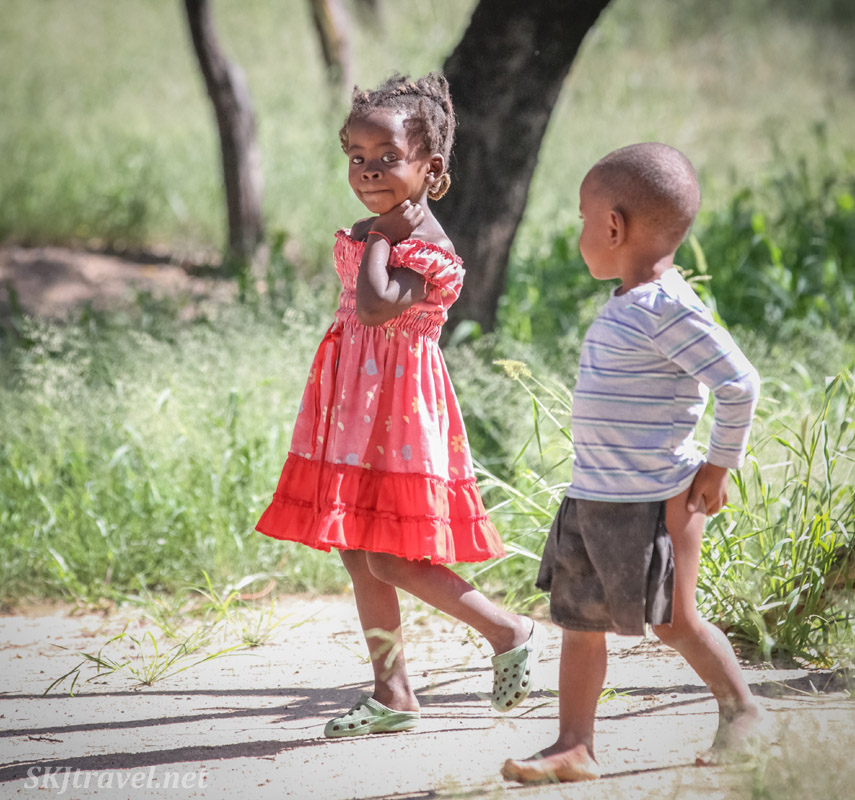 Not shy or coy, I can't put my finger on it, but somehow just a wee bit wary ... like perhaps he's not quite sure whether or not something's is going to jump out of the camera. 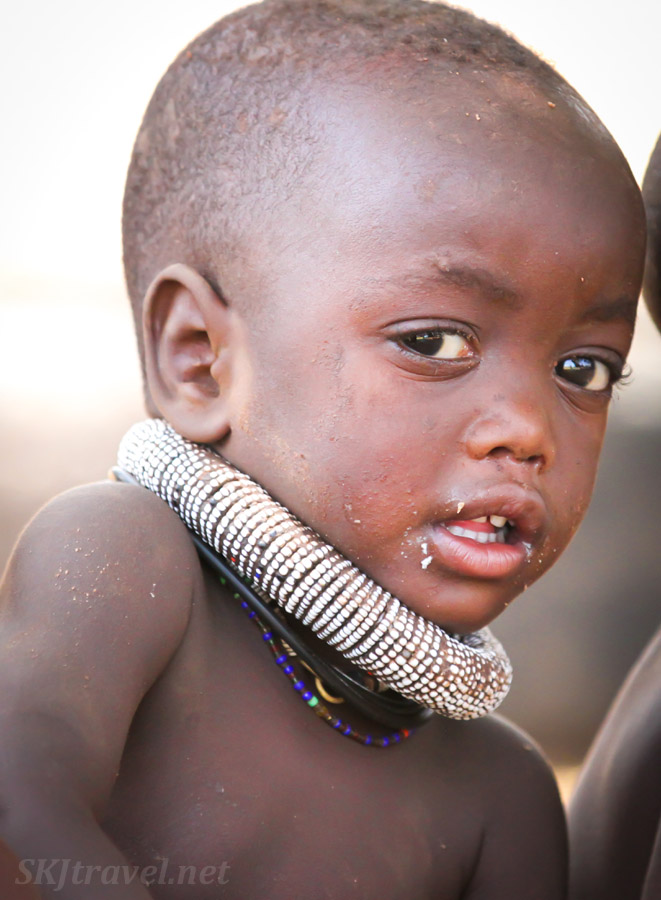 This kid's got my number. And everyone else's! "Yo, come back for more photos soon!" haha. So I guess I will end as randomly as I began. I think this makes a good batch of faces for Part 1. :) 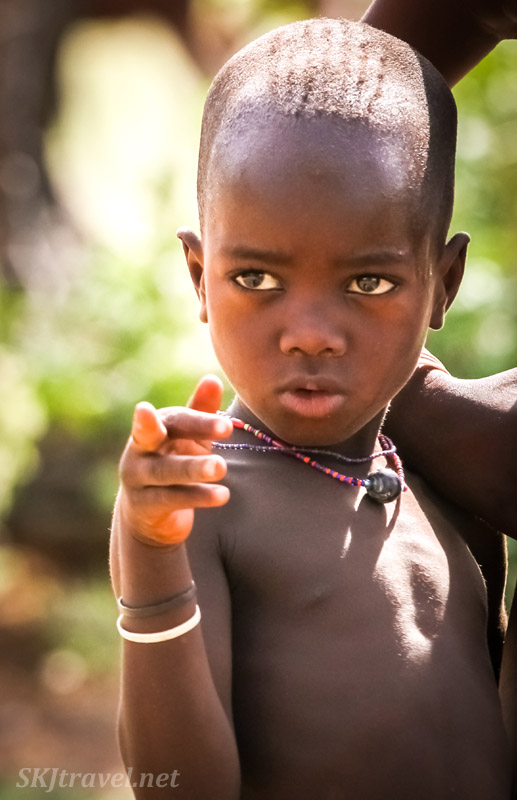 See more faces from Namibia in Part 2 and Part 3