In the little bit of research I did before landing in Buenos Aires to decide what we should do, one recommendation I consistently ran across was a day trip to Colonia del Sacramento a short ferry ride away in Uruguay. (Well, "short" depends on which ferry you take.) So after a couple days in the hustle and bustle of busy Buenos Aires, we took the early morning fast ferry from Puerto Madero to spend a very laid-back, relaxing day strolling the streets of Colonia del Sacramento. We didn't have a map to tell us where to go to see the old colonial town center, so we just kind of wandered around a bit, but it was not difficult to stumble upon.

On our wandered-way winging it to the town center, we strolled down lovely tree-lined cobblestone streets in a kind of tree tunnel. 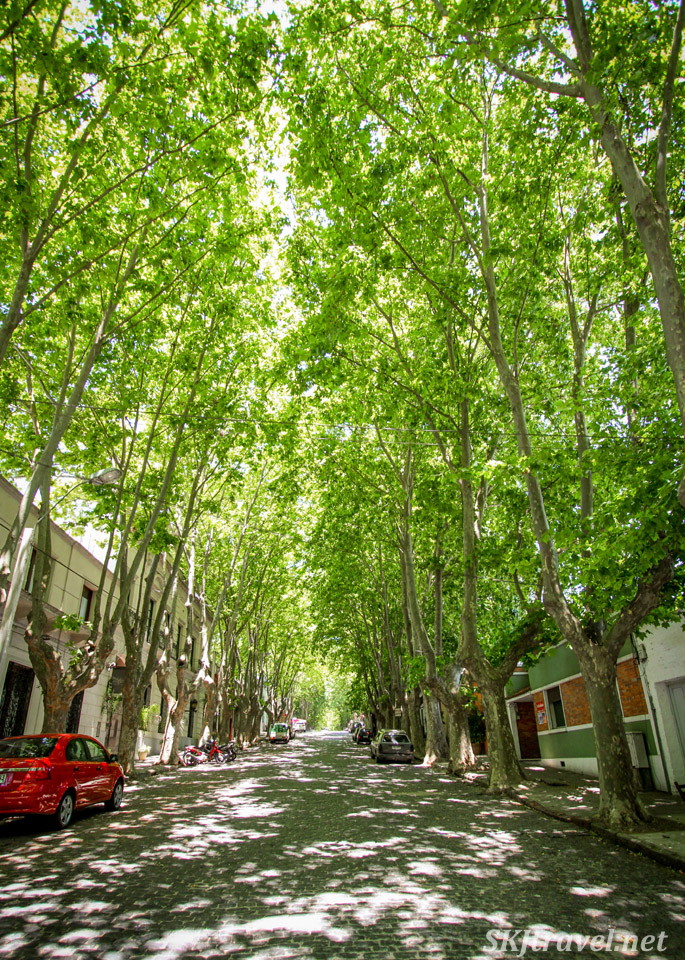 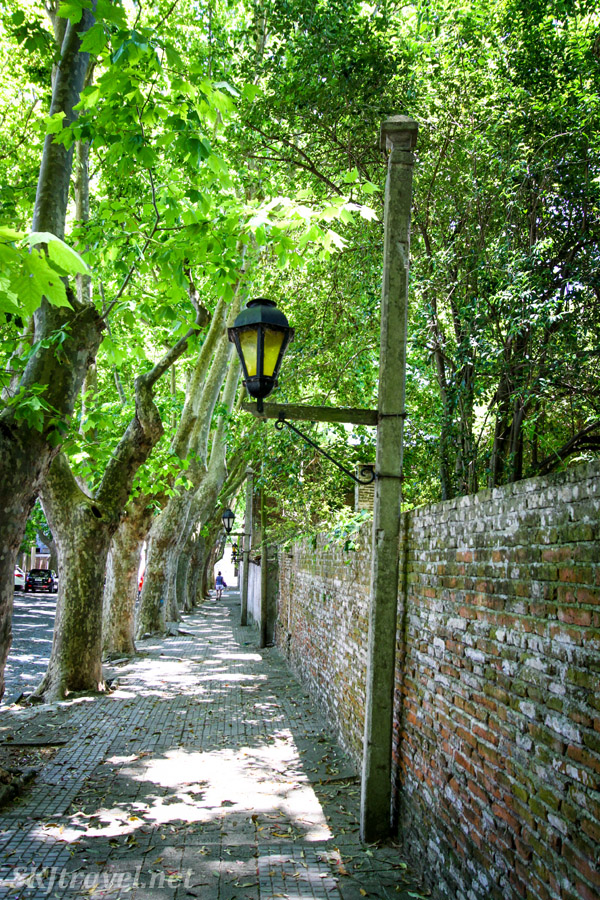 I had read somewhere that green Austral parrots made some of these trees their home. I wondered if they would be easy to spot up in the green trees. But there was no doubt when we came upon them because of the racket they made with their voices! No, unfortunately, they're weren't speaking Spanish, like you might expect a parrot in Uruguay would be, they were speaking Portuguese. The town was, after all, established by the Portuguese in 1680 as a defensive outpost. I know very little of this language, so the only thing I could really understand from them was "bom dia" ("good day"). hahaha. Kidding, of course. Nah, just a lot of bird language. I didn't get pictures of them but I was excited to find them. (I did manage a couple shots later in Argentina, in Patagonia.)

Eventually we saw signs on the road pointing us toward the historical central town square. Following those, along the way we walked through some interesting abandoned buildings. I like it when people take decay and turn it into an artistic canvas. Very common to see these days in my urban travels, and I approve of the evolution of graffiti. 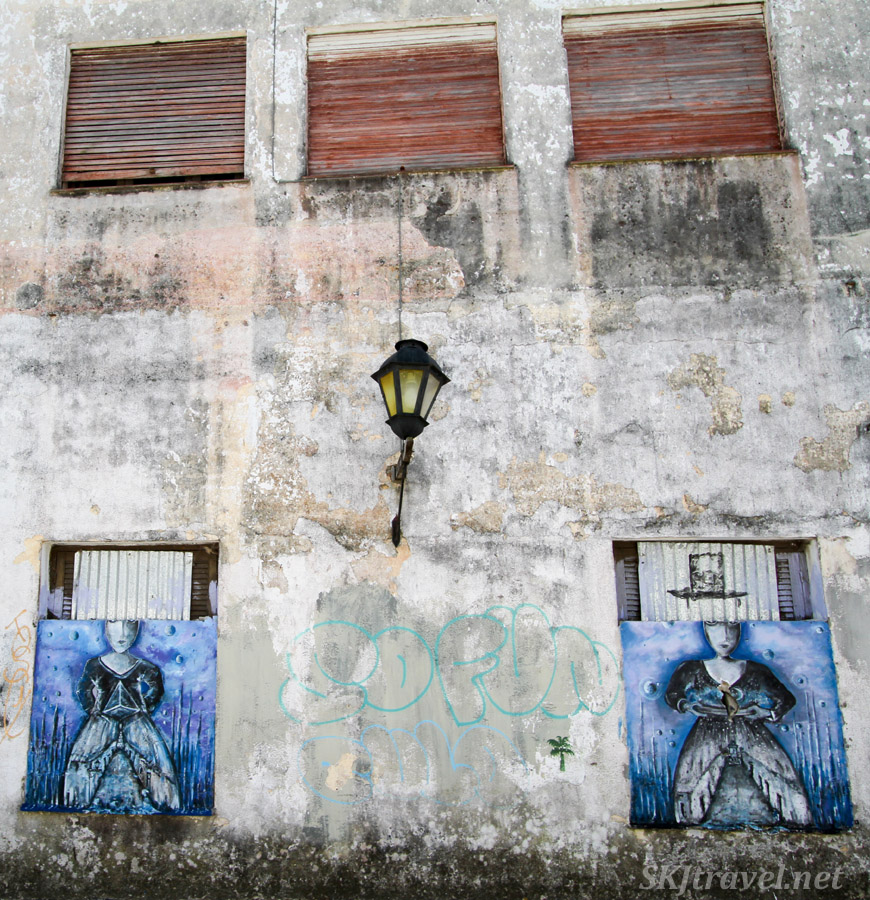 Of course evolution is a slow process ... The vines and bushes may get the last word on this building. 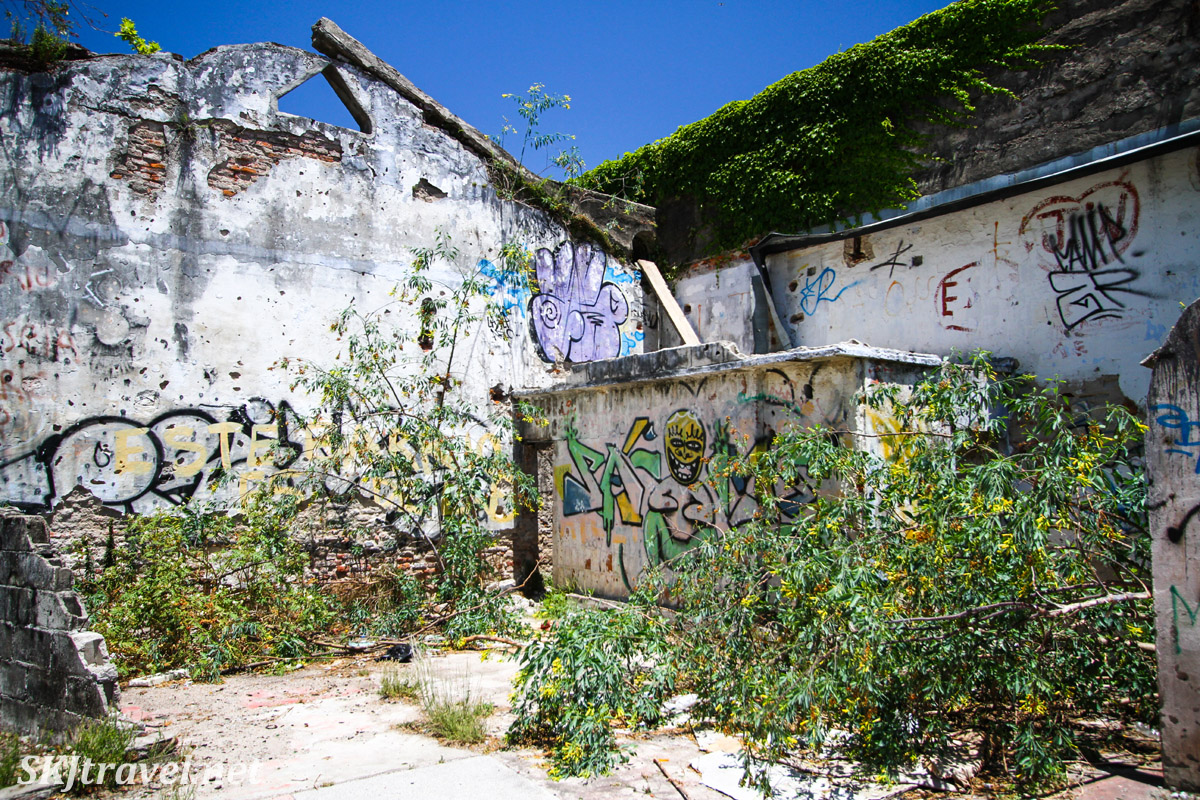 A street in transition ... further down on the left you can see it kind of alternates being traditional slogan-ist graffiti and colorful contributions. 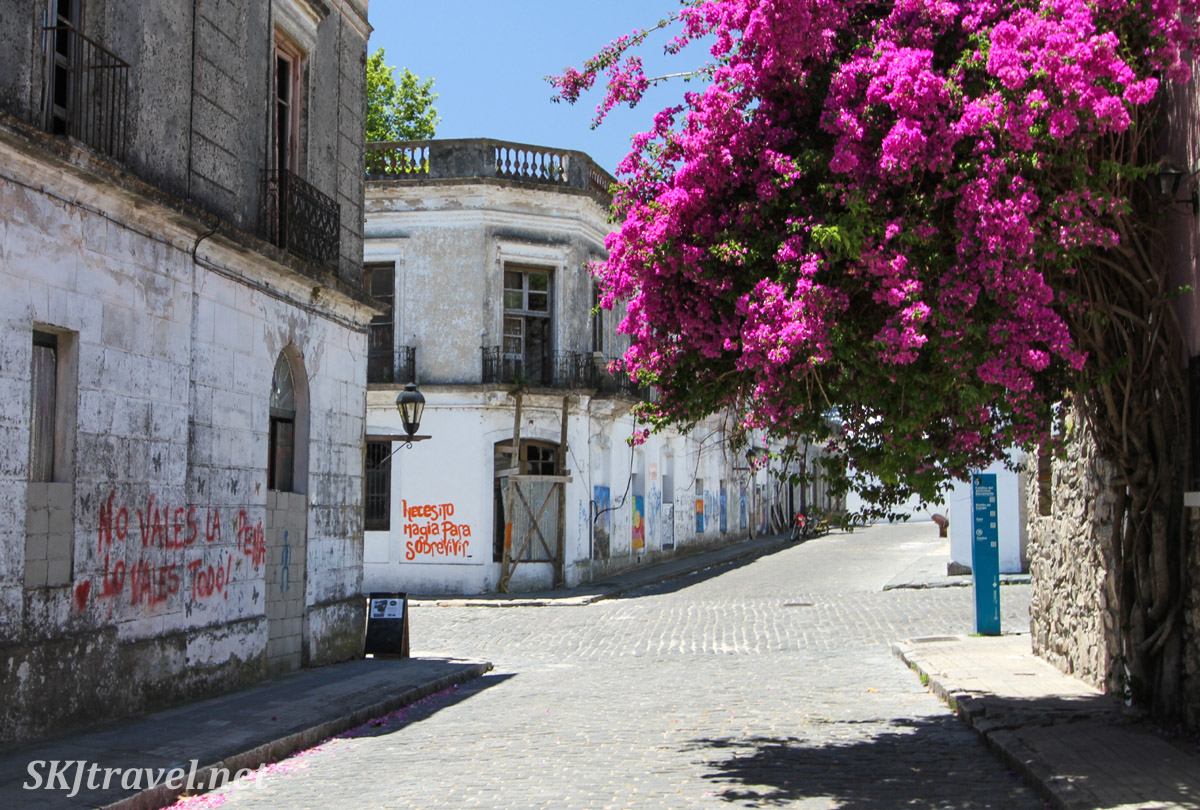 The historic colonial center is quite small, arranged outside a military fort around a central town square. There are a surprising number of houses (eight) that have been turned into little museums around this square, portraying the history of the area and the daily lives of early inhabitants with various artifacts on display. A visitor can buy a reasonably priced all-inclusive ticket to see all the ones that might be open that day. At the ruins of the old city fort, we climbed up a modern lighthouse for a nice view. 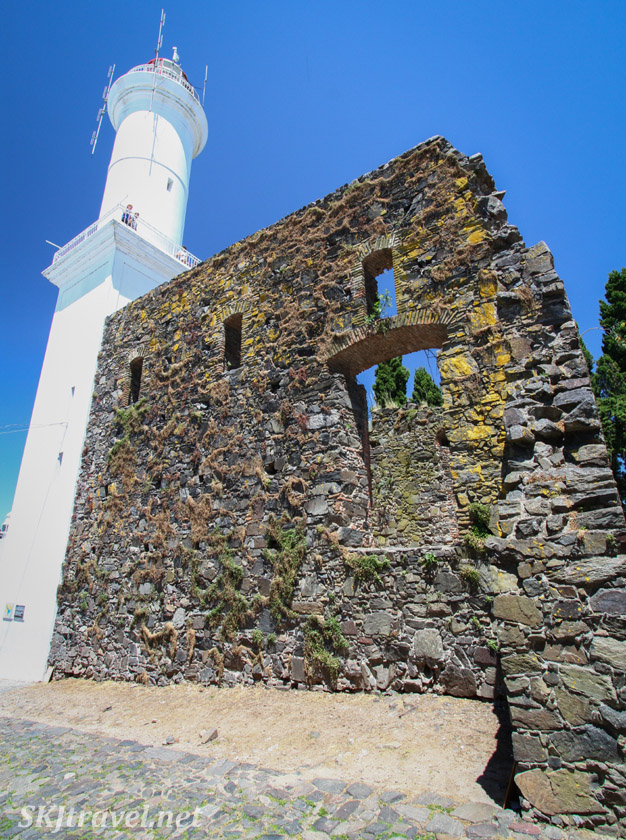 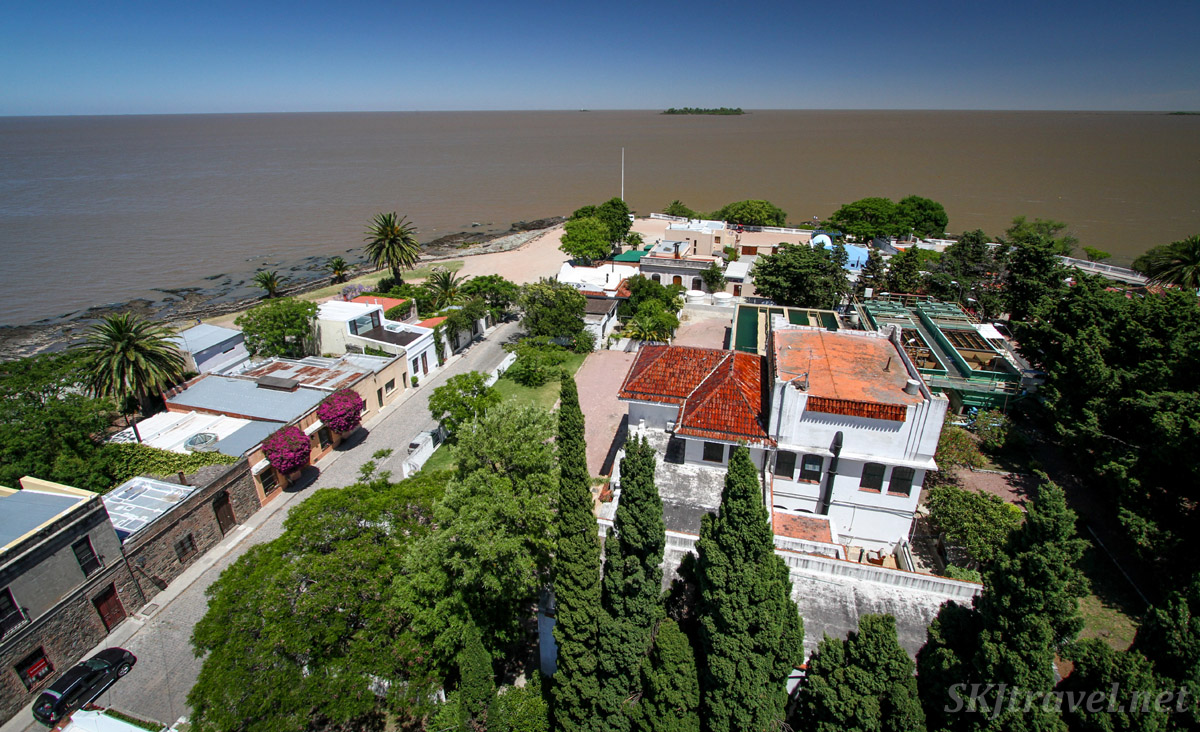 A meandering walk through the streets is at least as entertaining as a careful tour of a museum. The old city center seems to have decided that antique cars will be the signature "statues" along their cobblestone streets. I don't know the history behind this, when or why people started putting antique cars out and either spiffing them up to run or re-purposing them into planters. But it's a unique feature that draws the tourists' attention. 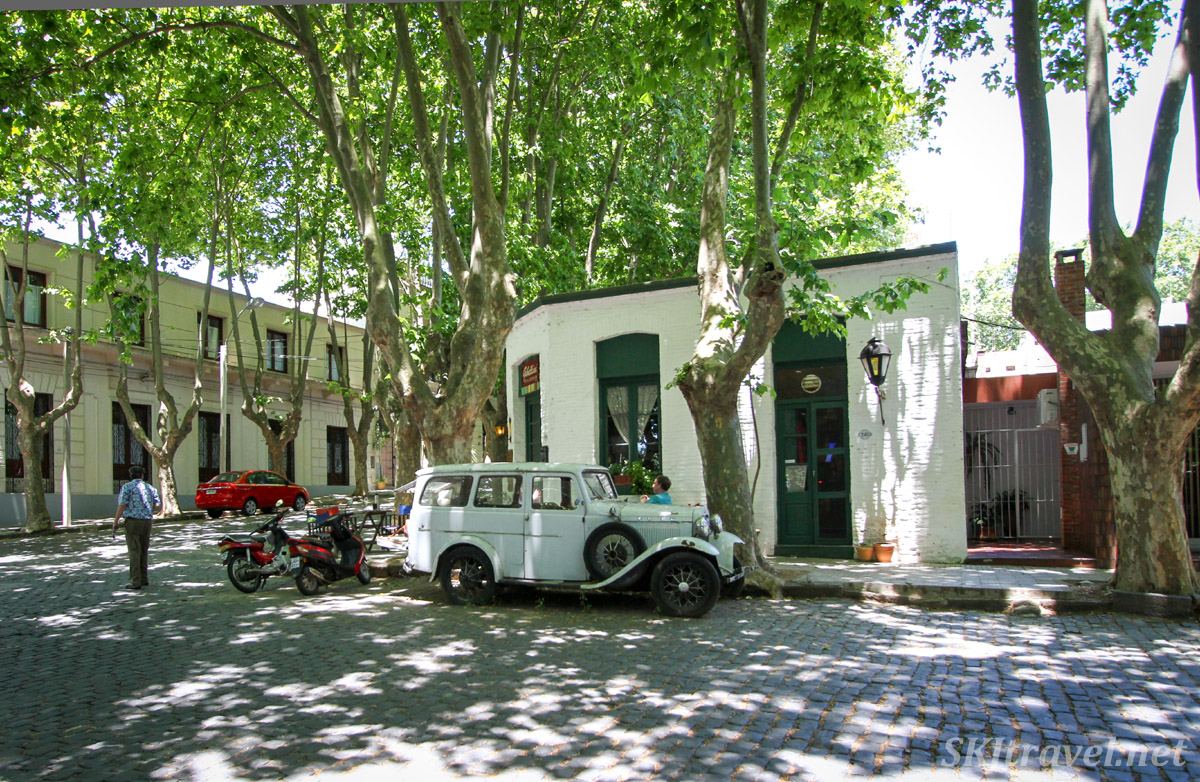 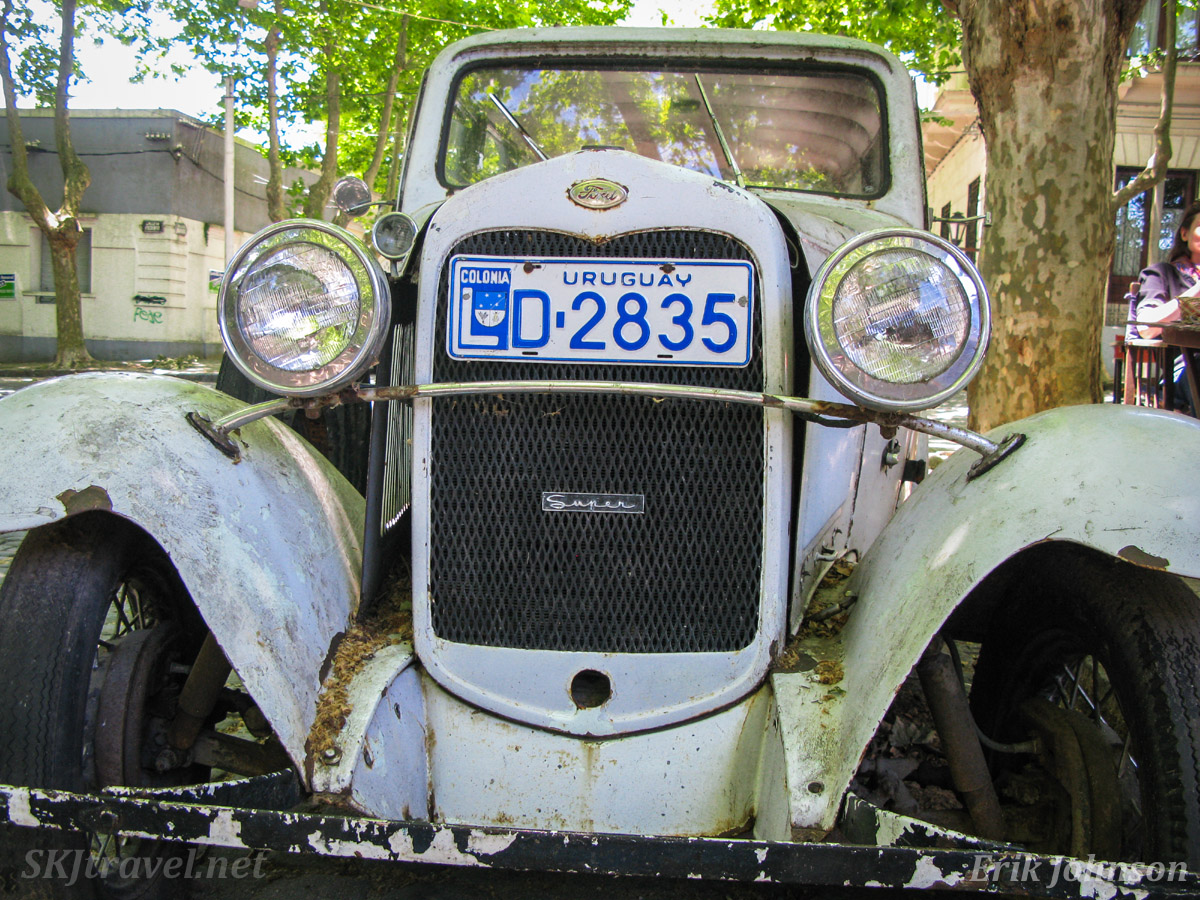 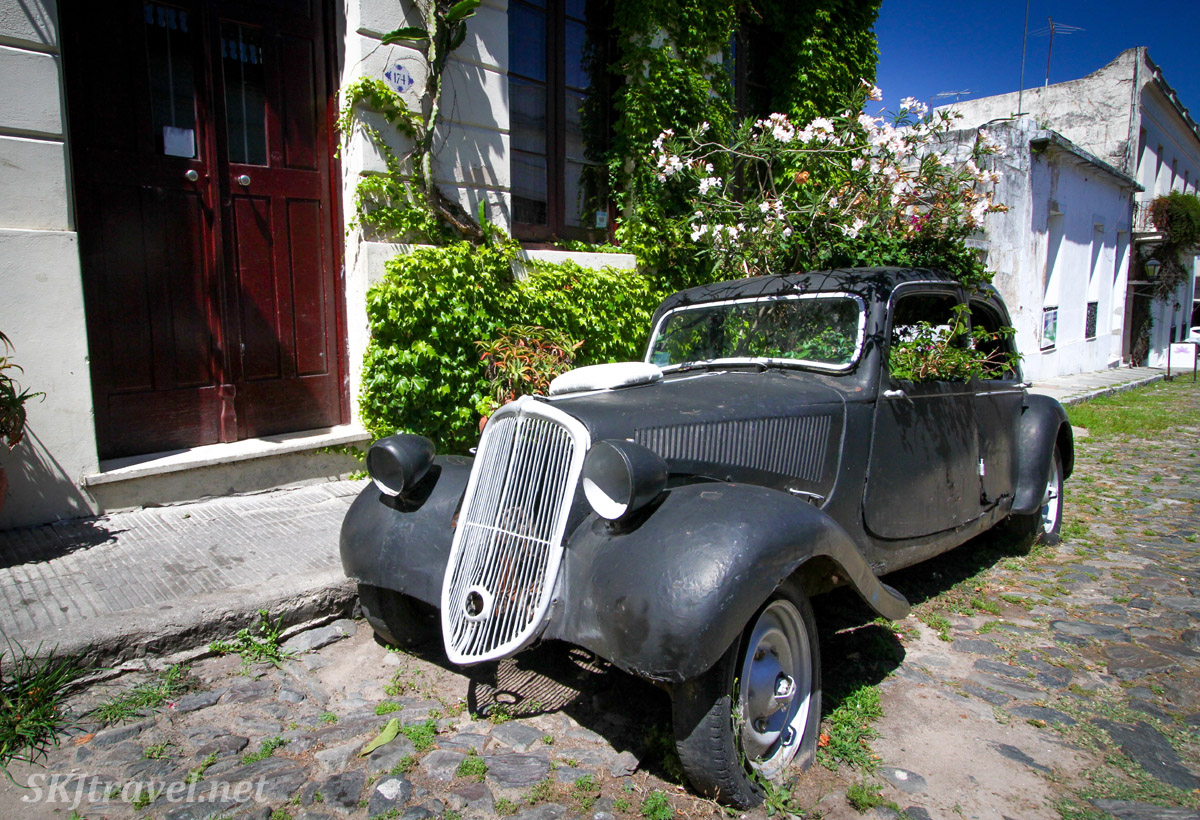 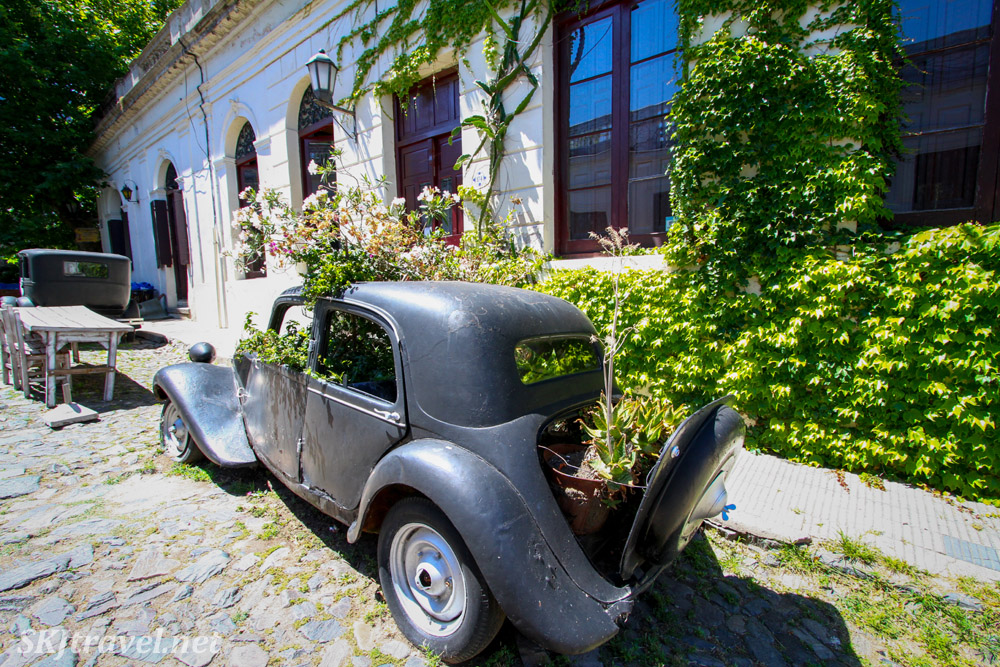 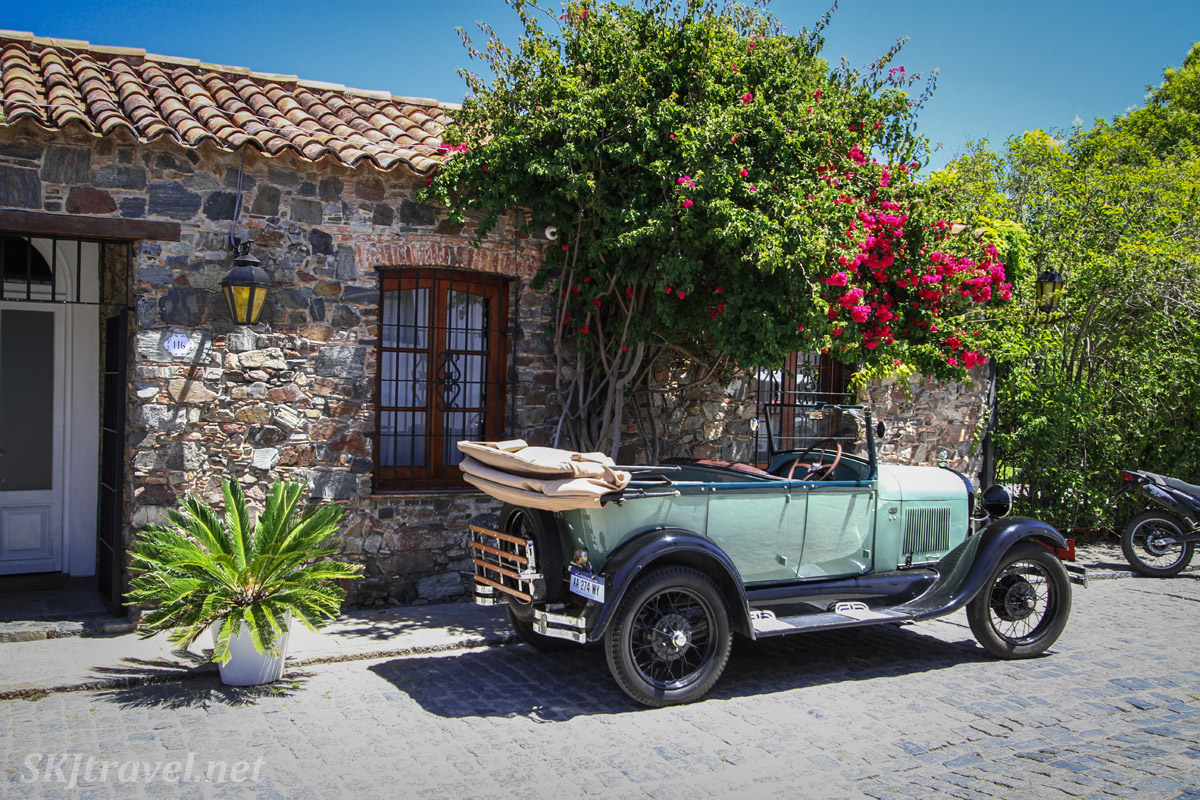 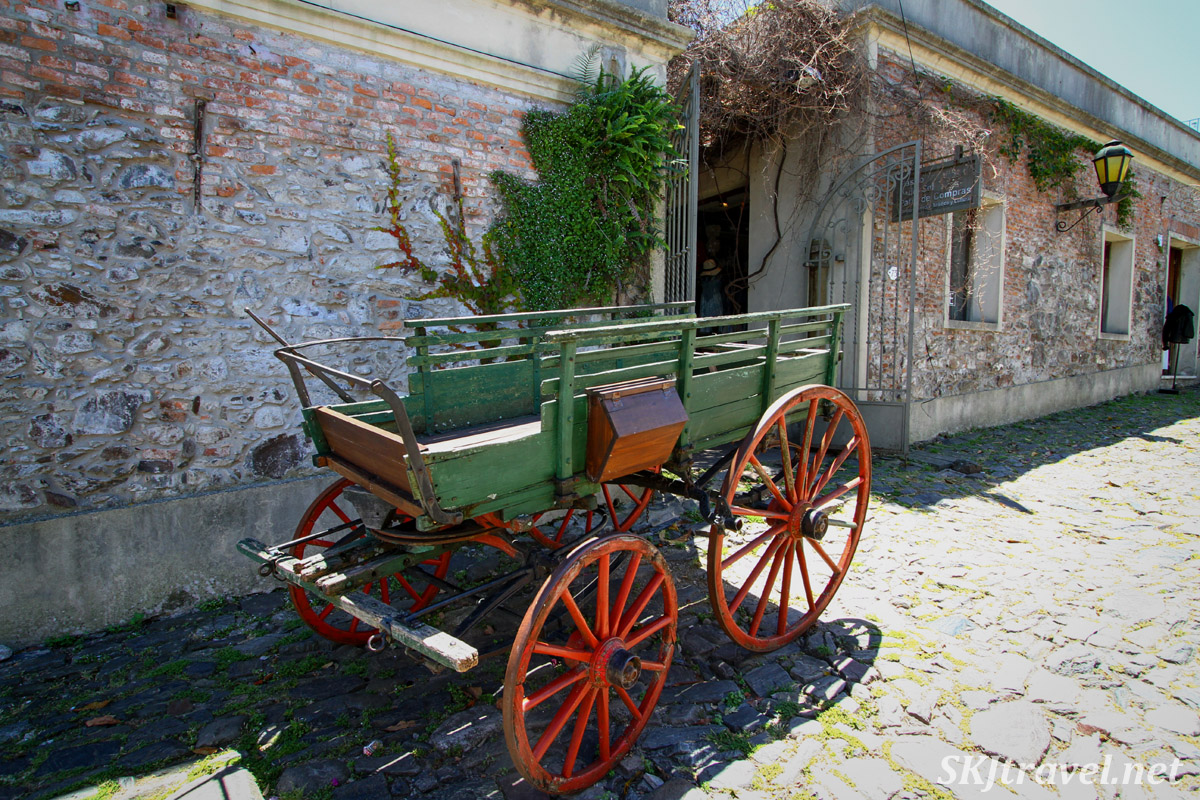 As we had left the dawn of winter in Colorado to come to South America, the profusion of brightly colored flowering bougainvillea trees was a delight that I particularly basked in. 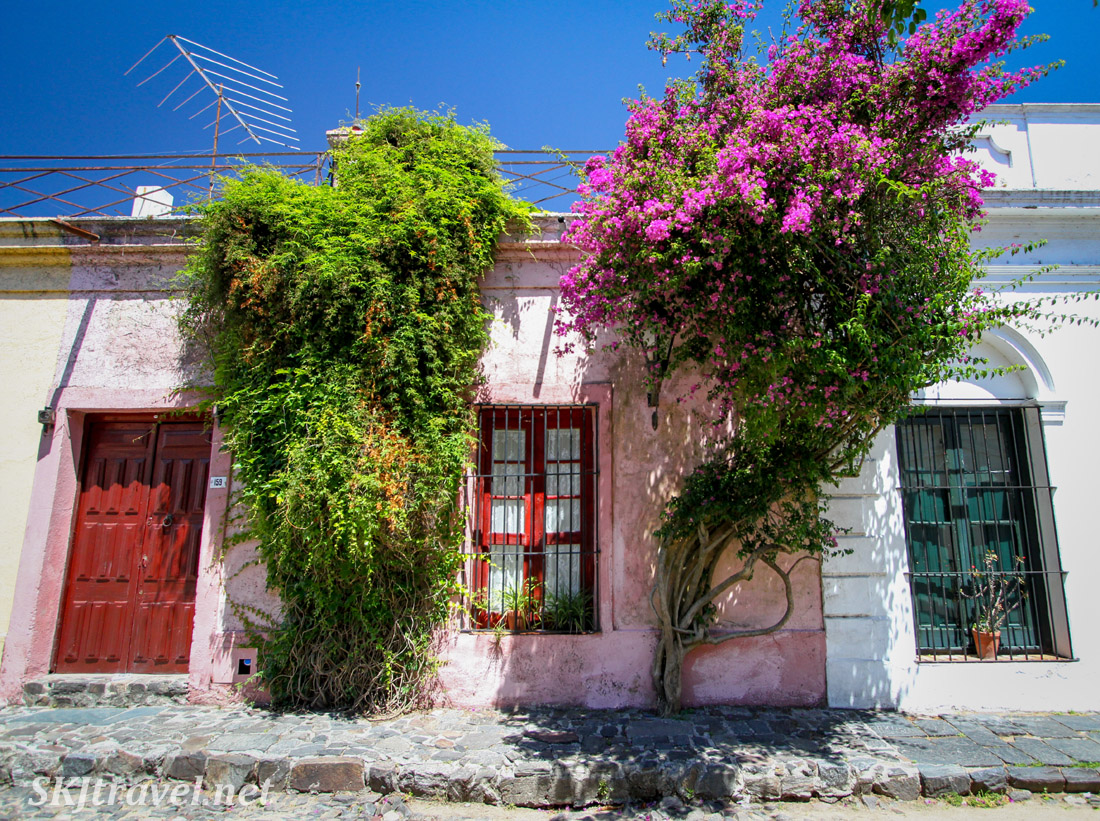 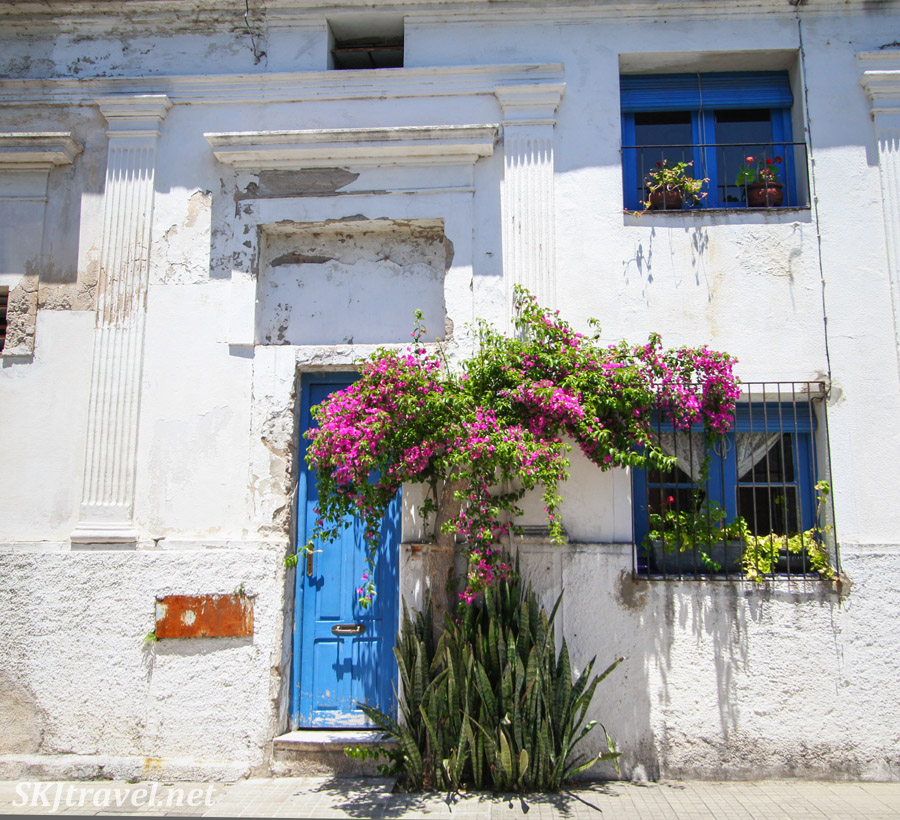 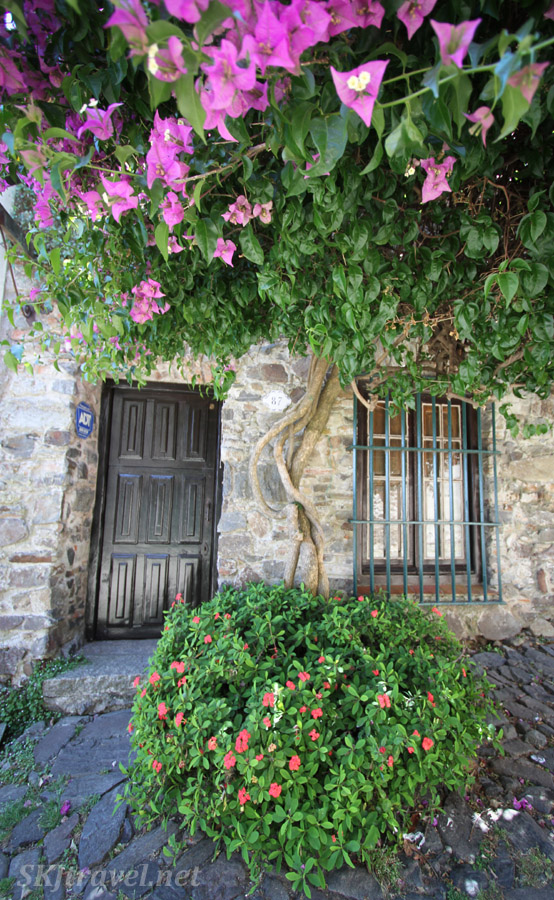 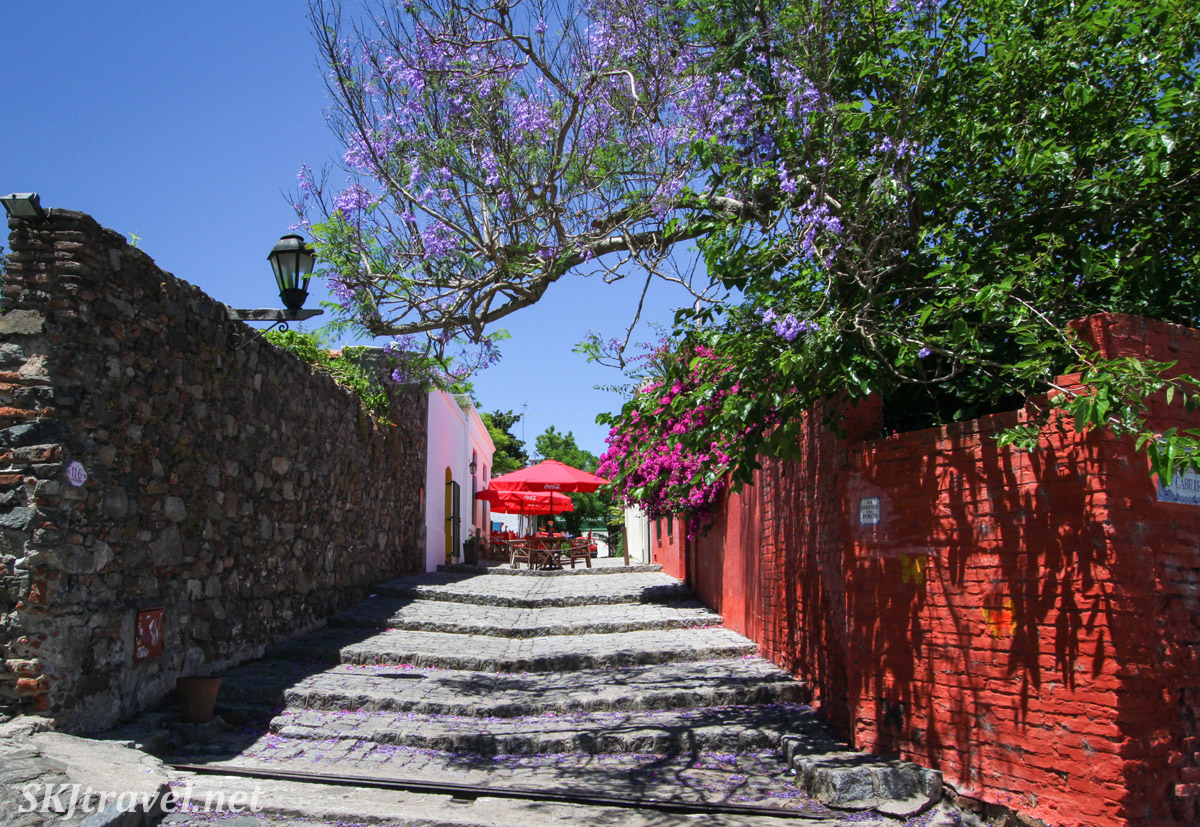 This spectacular beauty below was in the yard of a house that doubled as an art gallery. Can you spot the kitty on the tree roots near the back? (try opening pic in a new tab). The gallery appropriately had kitties lounging on the furniture. I think they belong in a gallery as much as they do in a bookshop. 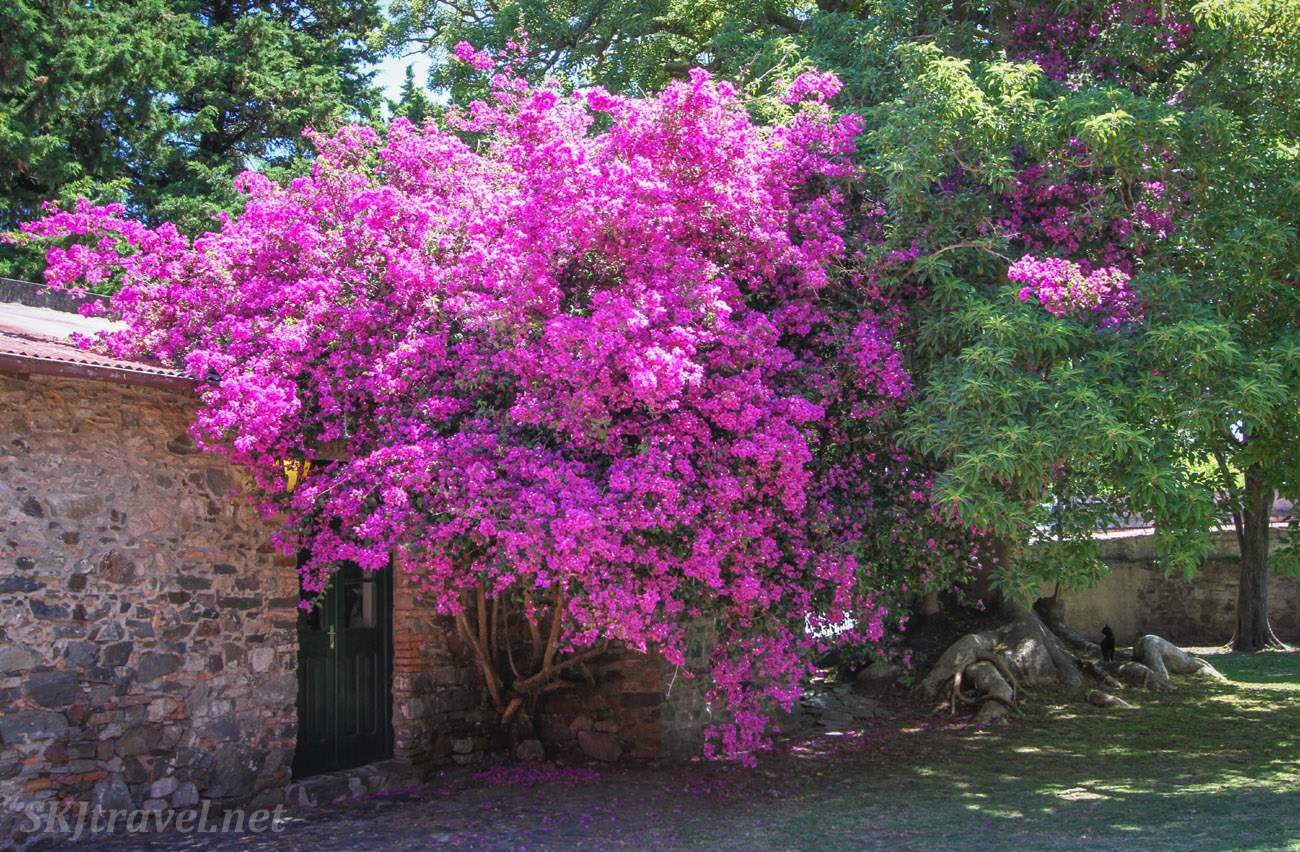 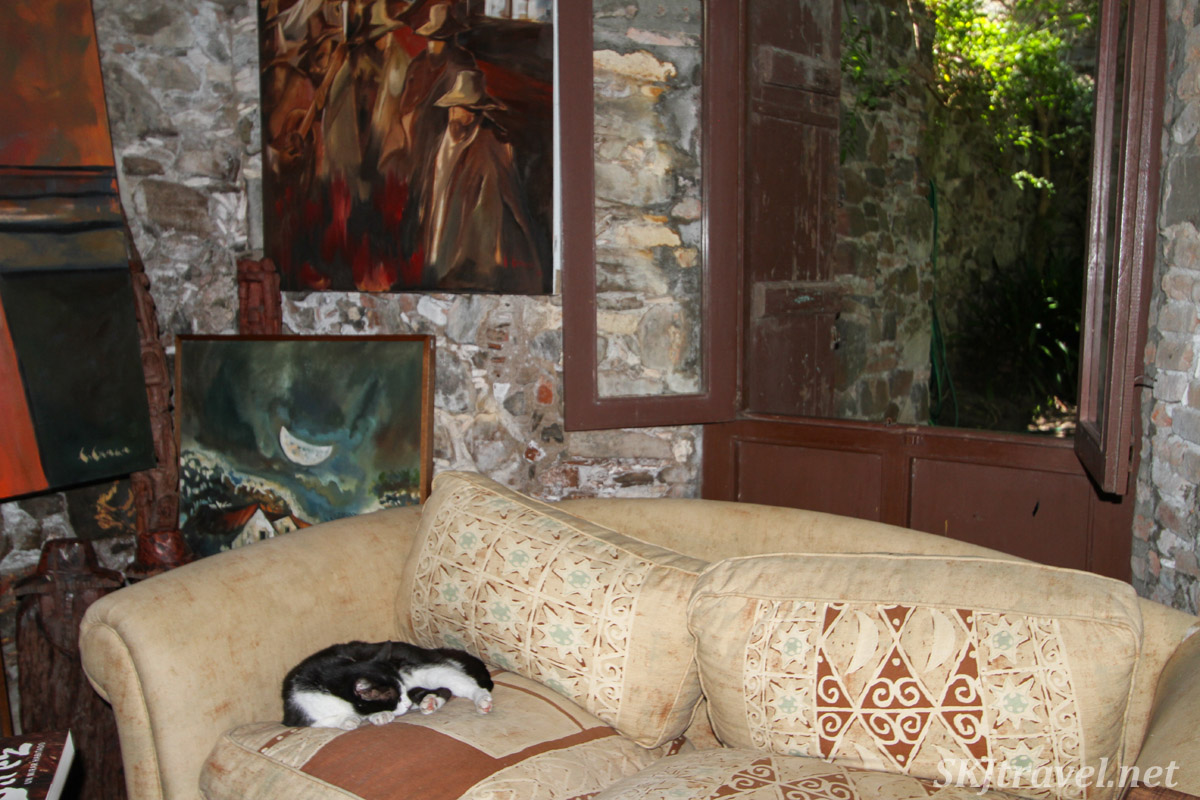 There are numerous cafes around the town square in which to enjoy a pleasant lunch and beer or the highly-caffeinated national drink, yerba maté. Erik was keen to try the traditional method of drinking it because he drinks maté chai and tea at home all the time, but in leafless mixes (like the chai or berry-flavored drinks, etc.)  We stepped into a cute little tea shop and sat on the back patio, where, similar to the antique cars on the streets, they had re-purposed old kitchen appliances into planters and surfaces for flower pots. 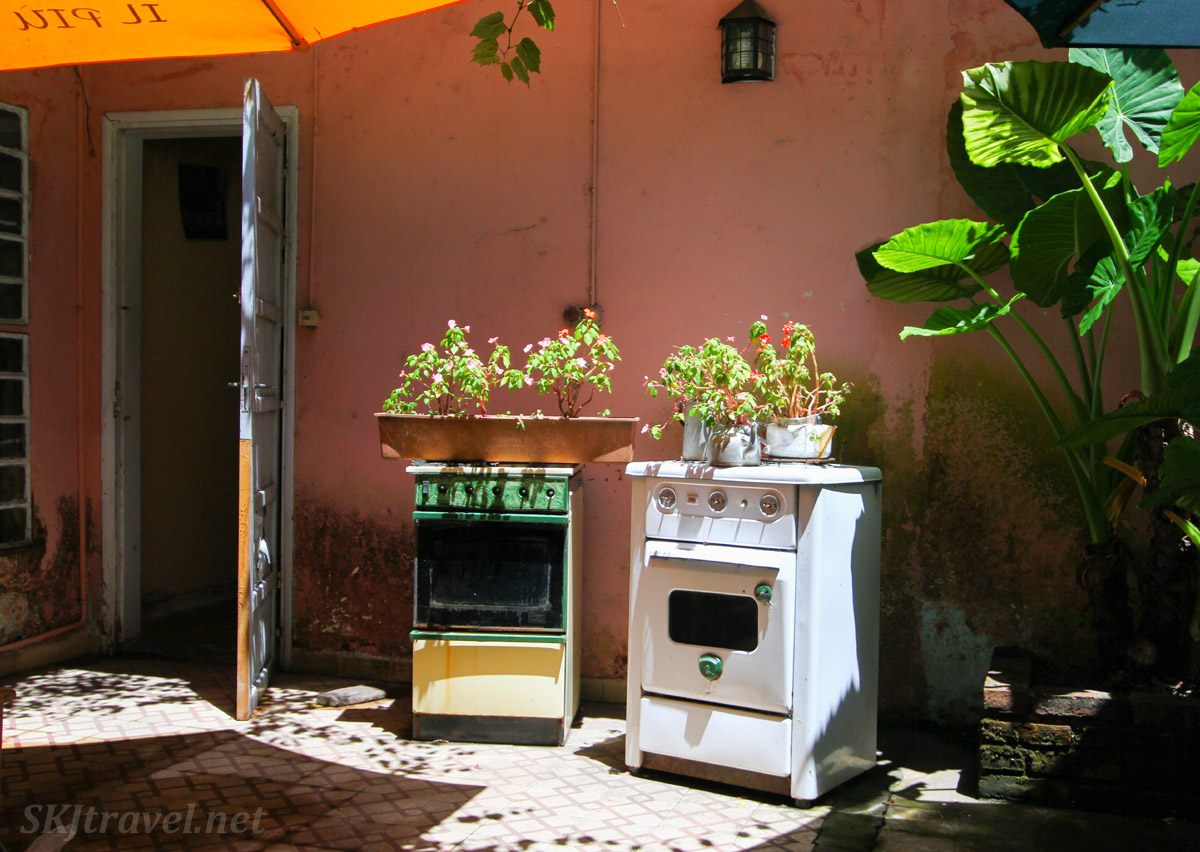 This is the traditional set-up for yerba maté tea -- a cup, which is typically made from a type of gourd or other natural material, full of loose tea leaves, which comes with a thermos of hot water and a long, metal kind of straw with a strainer in it to suck the water from the leaf-laden cup. And by laden, I mean literally full of leaves. You can only pour a little water in at a time because of the density of leaves, hence the thermos to keep the water hot. You let the water settle a bit down through the leaves and then stick the straw in and suck up yerba-infused water, and then pour in more. It is not something you can slam ... rather, a slow and ritualistic process. We saw people walking along the streets with this whole little kit in their hands, drinking as they walked. And every single souvenir shop in the city sells these kits, and the gourds are usually engraved with various designs. 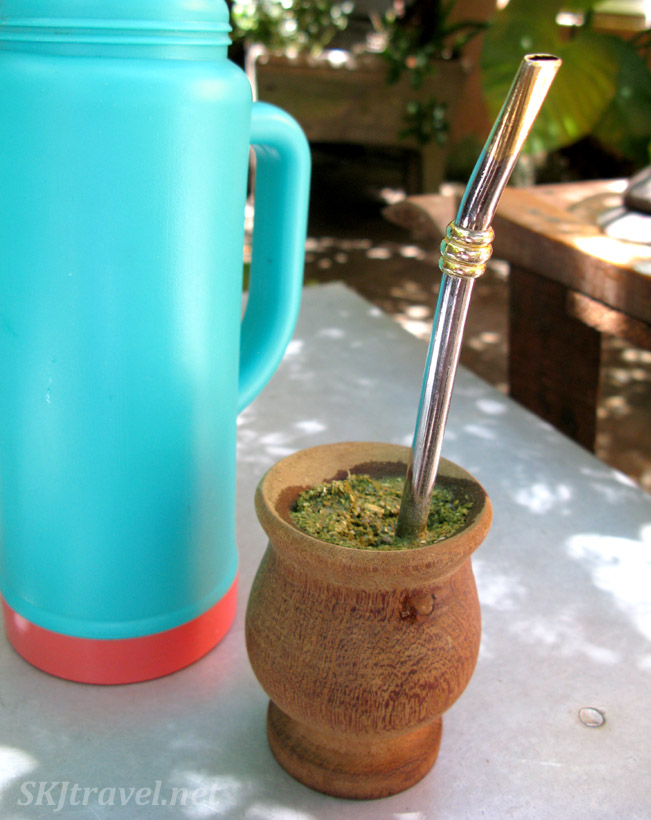 But we capped off our pleasant day in this town with a stop at a pub closer to the ferry terminal to kill time with some beer until our scheduled departure. We sat at a table on the sidewalk and made friends with the urban domestics. Erik made a particularly close pal with this sweet little dog. 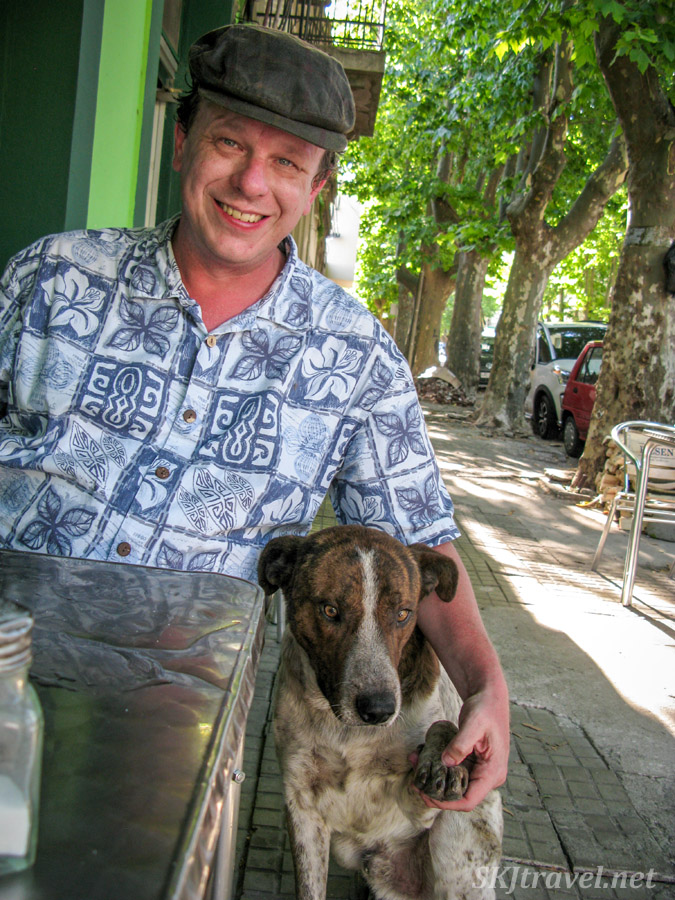 So, I would echo the sentiments that I read and pass on the recommendation to take a day trip to Colonia del Sacramento if you have the time while visiting Buenos Aires. There is a lot to do in Buenos Aires, but it makes for a pleasant interlude in city life and bustle.