In this post I'll share some places we explored with Montezuma, Colorado, as the anchor. We explored three gulches off the Peru Creek Road, the most interesting of these in terms of mining ruins was Cinnamon Gulch.

At the mouth of the gulch, visible from Peru Creek Road (it's a dirt road, not a 4x4 track), are the steadily collapsing ruins of the Pennsylvania Mill, and further up the hill the mine and the tram house that conveyed ore between the mine and mill. The Pennsylvania Mine started operations in the late 1870s pulling out about every kind of valuable mineral in these mountains: gold, silver, lead, copper and zinc. Its biggest production year was 1893, the year of the silver price collapse. It operated until 1908 and then continued sporadically until the 1940s.

If you look closely, you can see the top of a wheel near the apex of the roof. A bird was standing there talking to us as if he was either the sentinel on duty to guard it or the tour guide explaining to us how the mill once looked and operated. 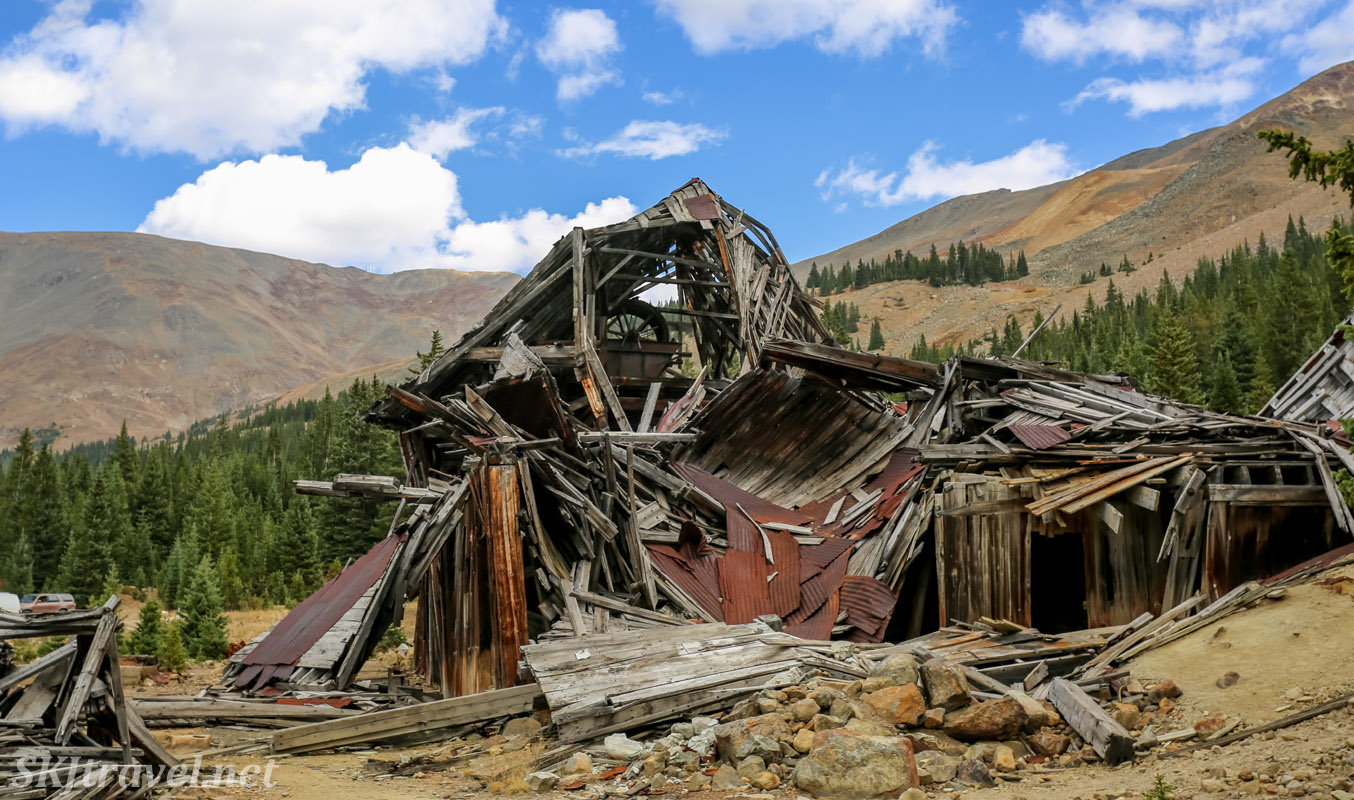 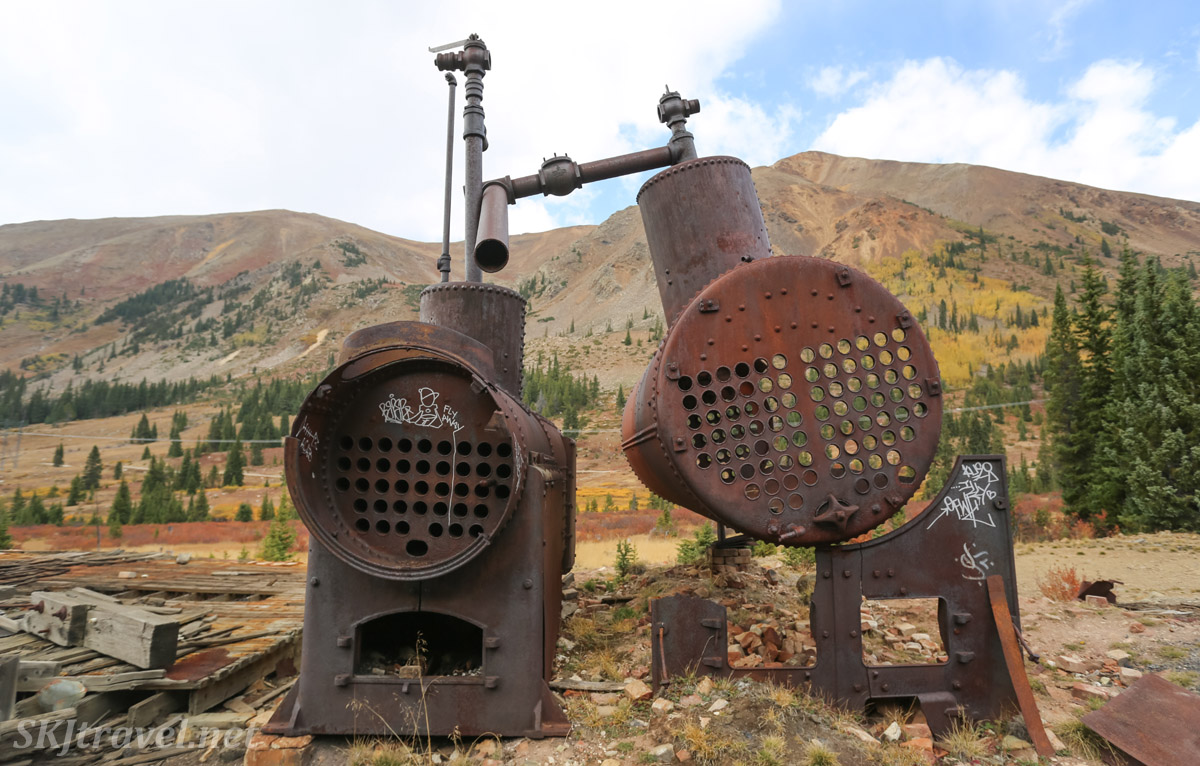 I wish I would have known about all these places a couple decades ago -- you can find photos on the internet that show how much more intact they all were even just 10, 15 years ago. I feel fortunate to see them at all before they're completely gone, as it's obvious that the trajectory for most of these is steeply toward a featureless pile of wood and metal. 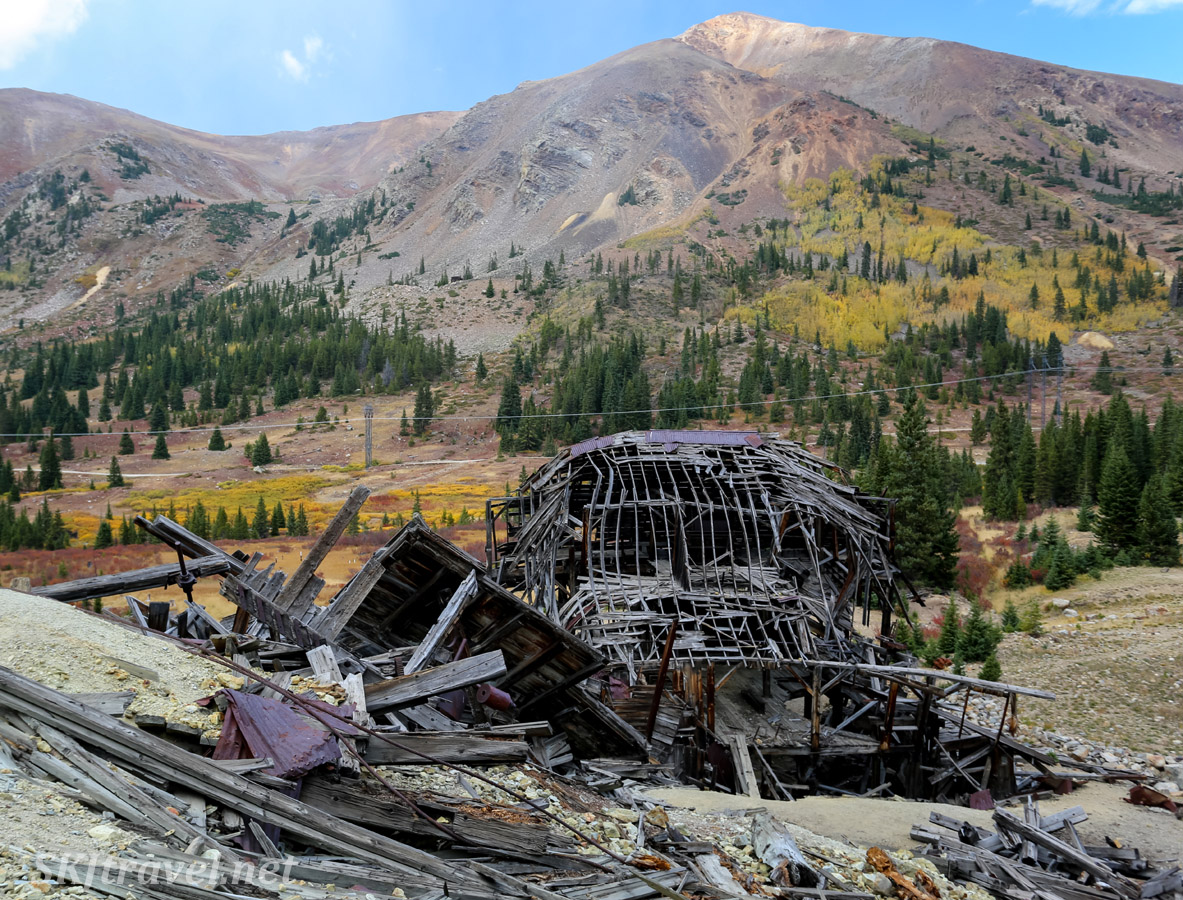 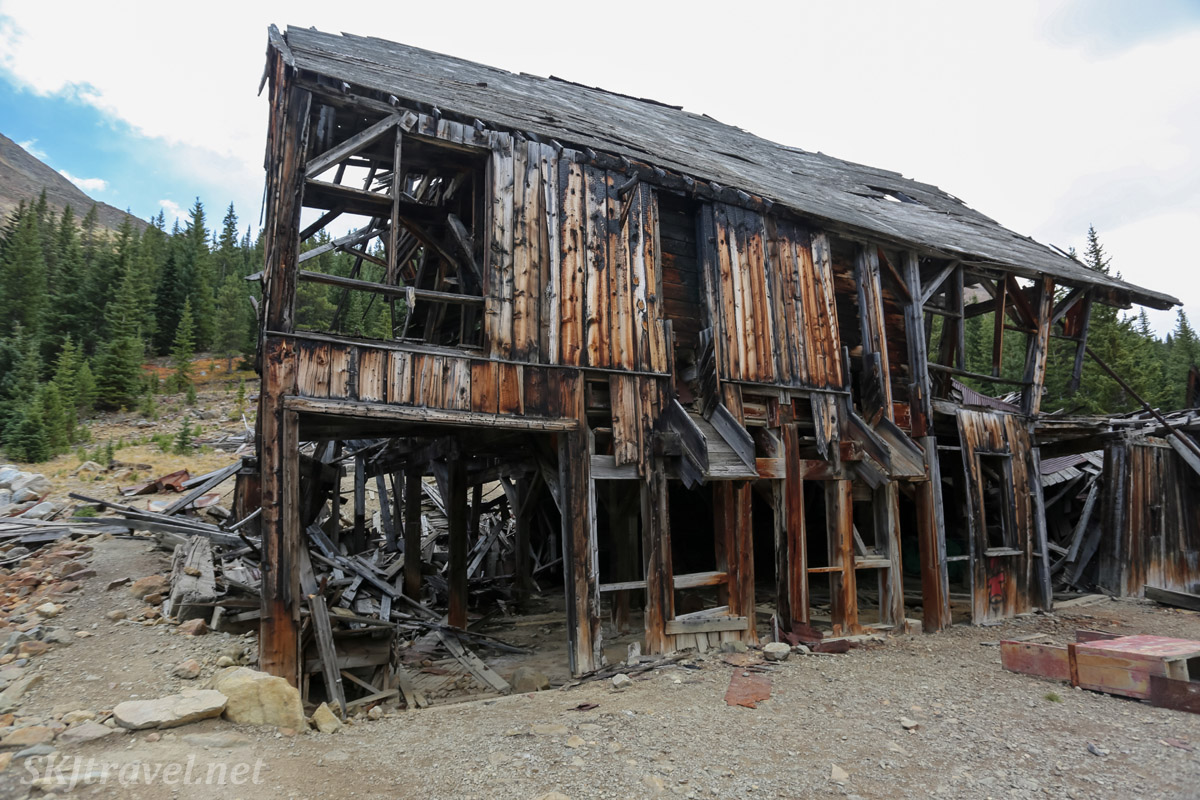 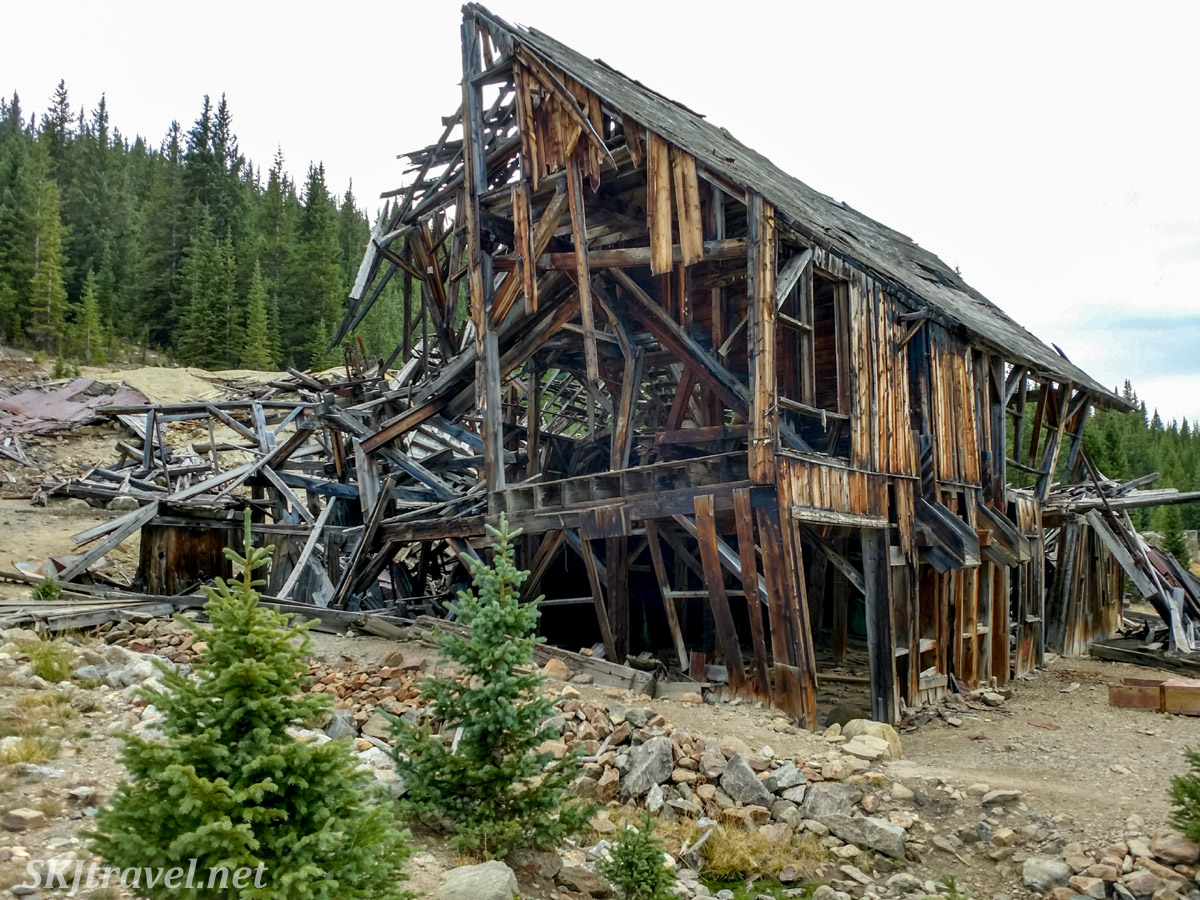 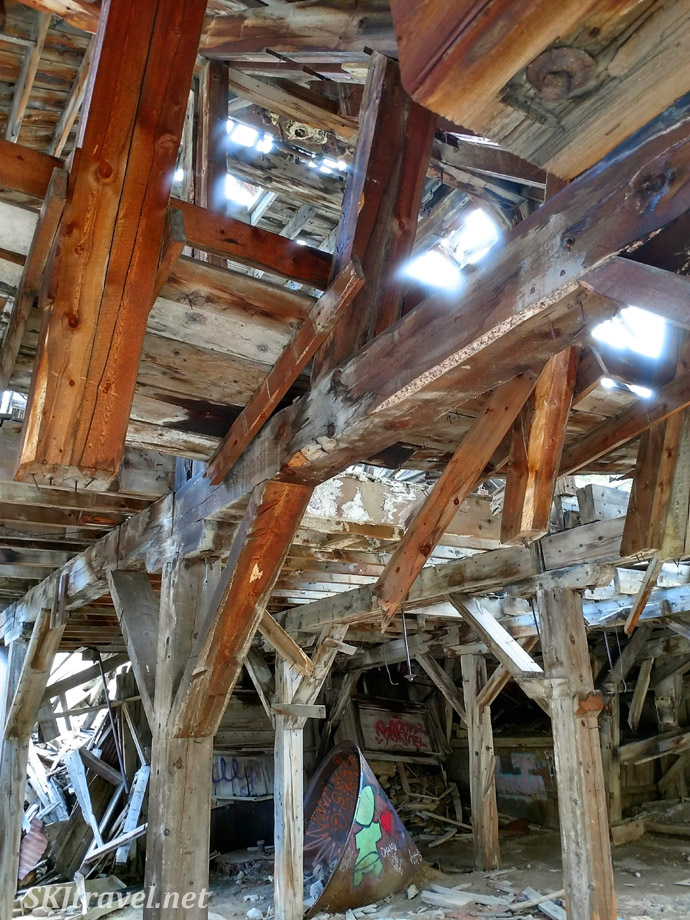 I was surprised to find out this mine is considered the most toxic in the state. Reclamation efforts are ongoing, but currently no fish or other aquatic critters can live in Peru Creek. 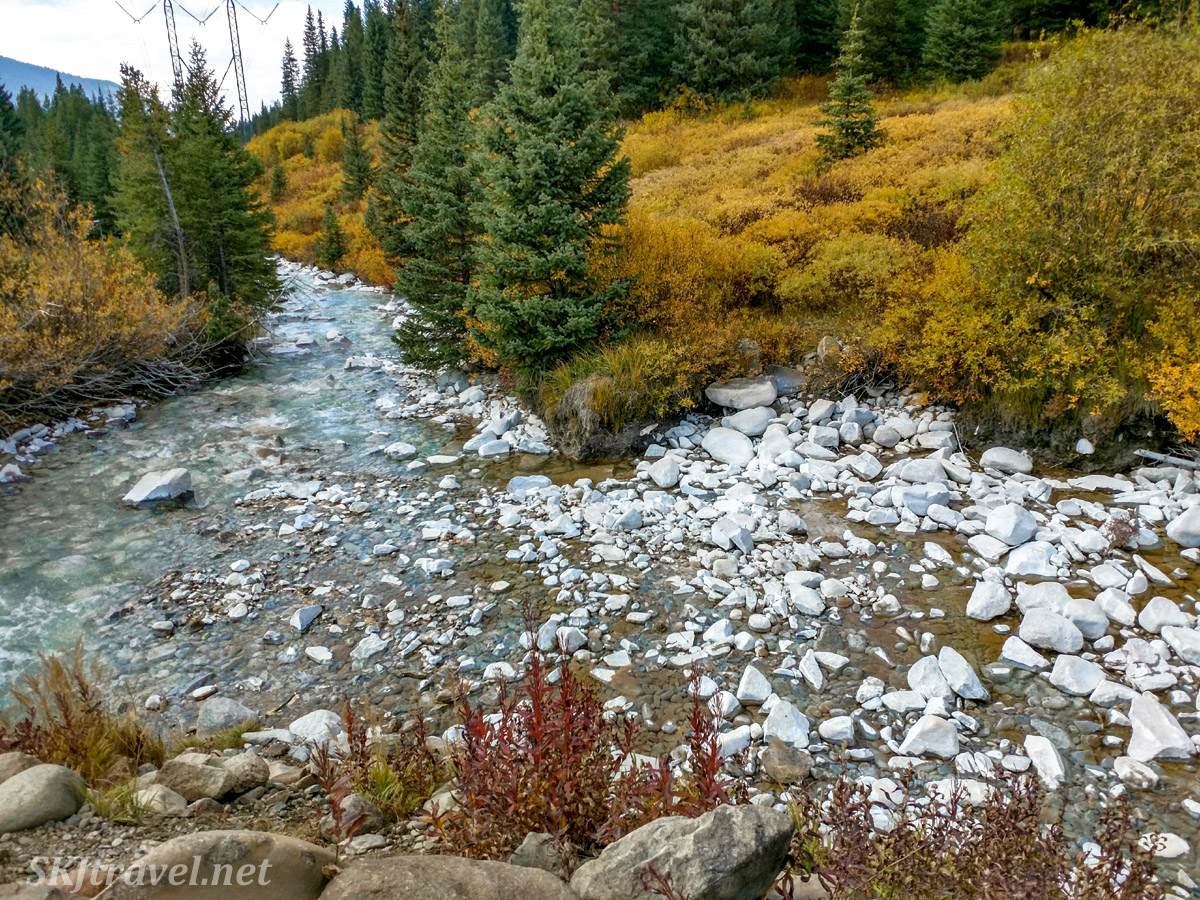 As a bit of an aside, you might be wondering, as I frankly did, " How does moving earth around create something toxic that pollutes the water?" I picked this explanation up from the Summit Daily if you're interested:

"Most of the gold, lead, copper and other metals mined in Colorado are found in ore deposits with metal sulfides. Drilling huge holes in the ground exposes those sulfides to air. Those compounds then combine with oxygen and water, and a chemical reaction occurs that creates sulfuric acid, spiking the acidity level of rivers and streams. The process also releases heavy metals in higher concentrations into the water as it trickles over the rocks, turning creeks a ruddy, orange color. Plus hard-rock mining smashed large rocks into small pieces, which means more exposed surface area, intensifying the problem. This oxidation of minerals happens naturally, but mining operations greatly accelerate the process." 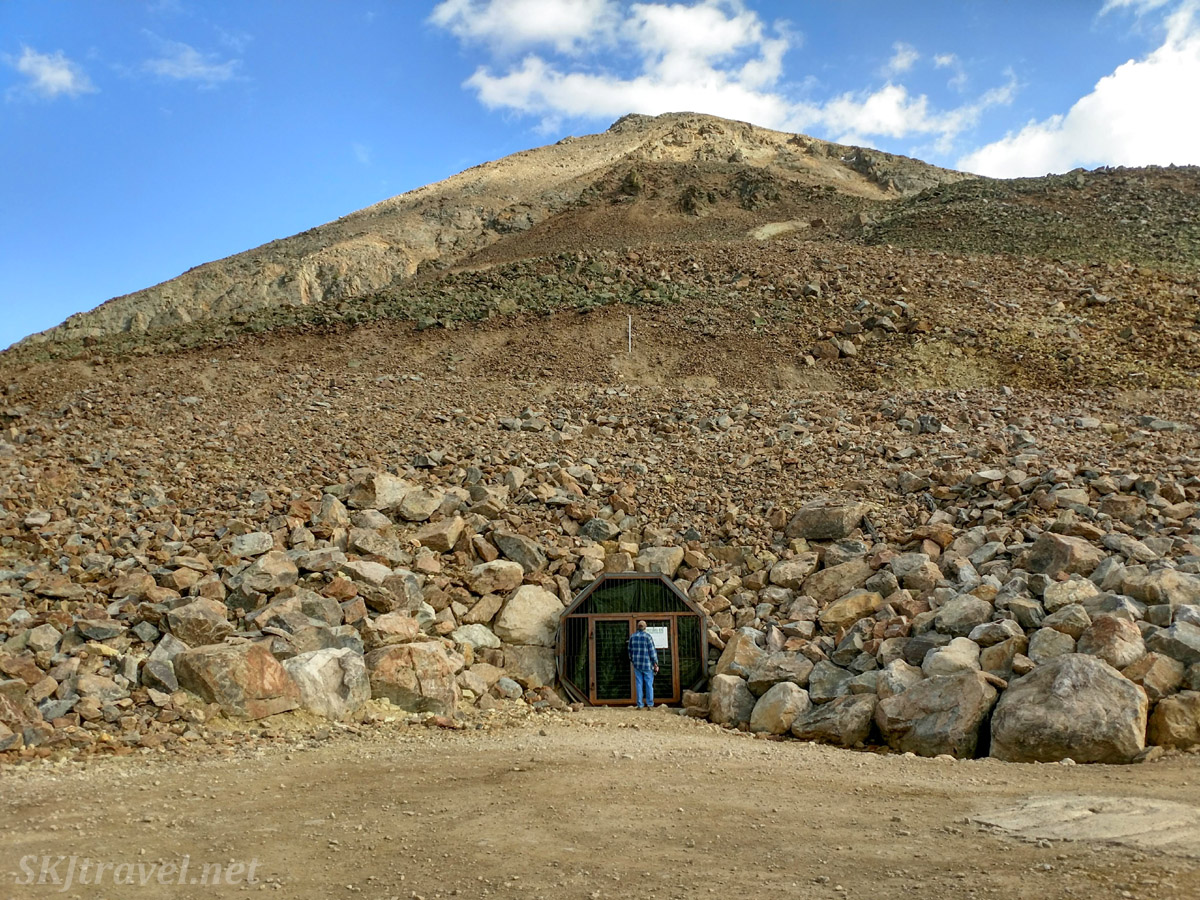 Trams are a feature prominent and particular to the old mines in the South Park-Montezuma area. I live in a gold and silver mining area also but most of our mines are at a lower elevation, below tree line, and trams were not employed ... either small mills were built nearby or other modes were used for long distance transport ... unlike this region where many of the mines were high up on bare mountainsides above tree line where tram cars would be unimpeded by the likes of trees, making them by far the most direct and efficient form of transport. 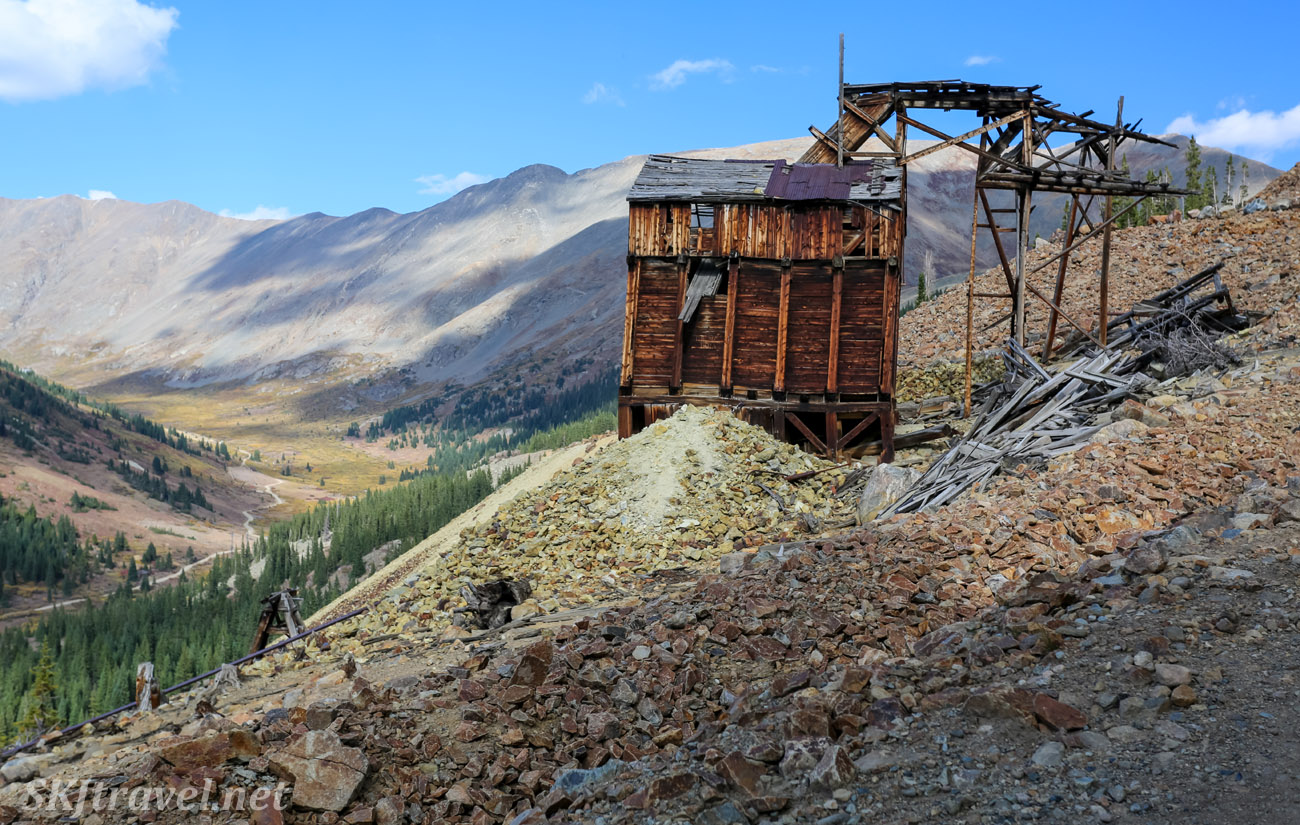 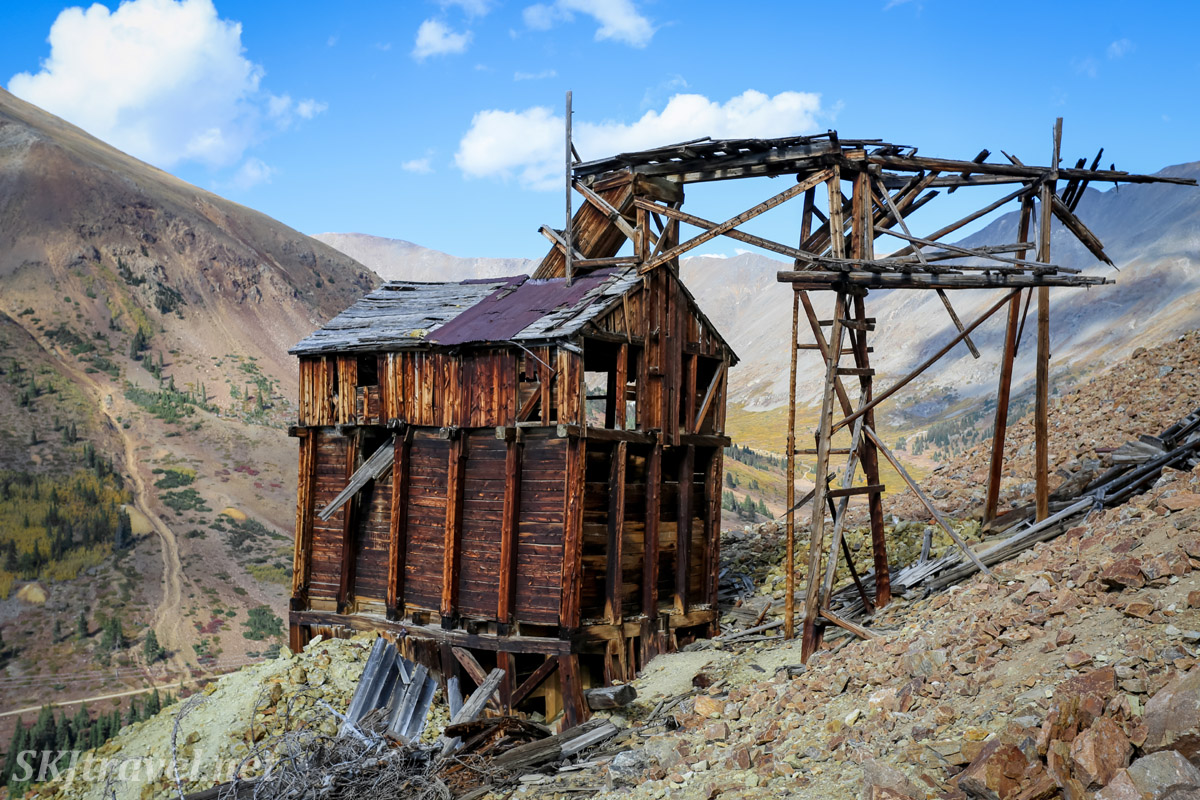 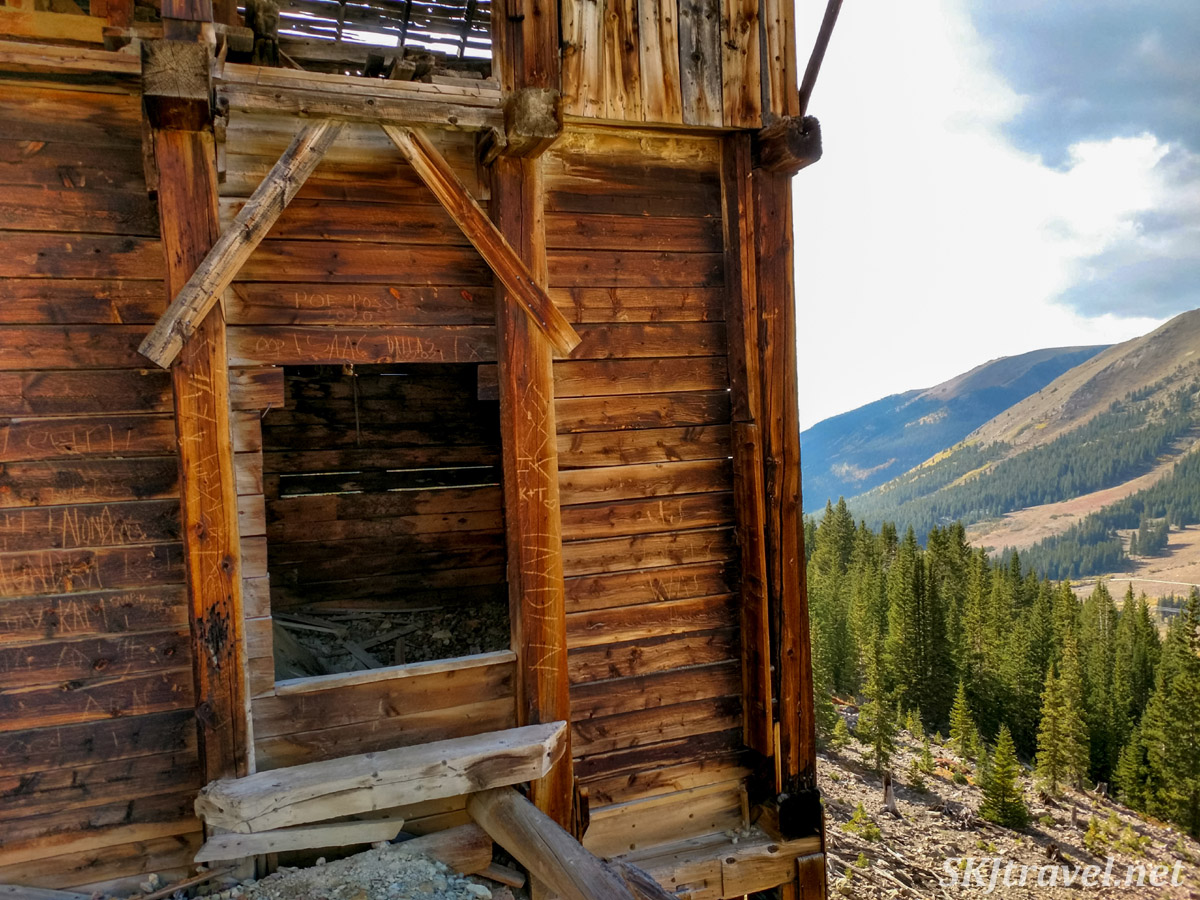 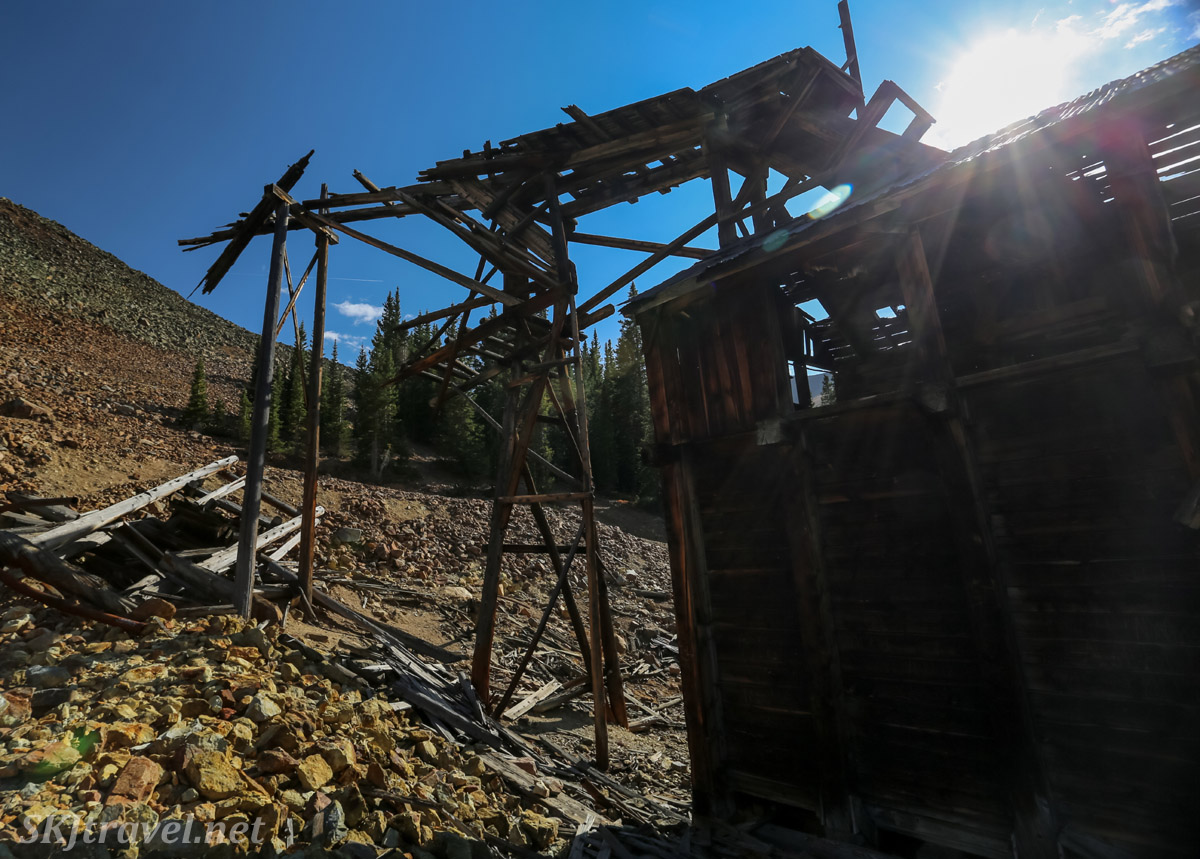 The most challenging of the three gulches to drive, Chihuahua Gulch, requires a high clearance 4x4 vehicle. There were no ruins to see, but the route was fun for Erik, his favorite kind of 4x4 trail -- some big rocks to clear but no cliffs to fall off of -- and there was a pretty hiking trail at the end. We were there late in the day and had not prepared for any real hiking, so we walked up it only a little ways. 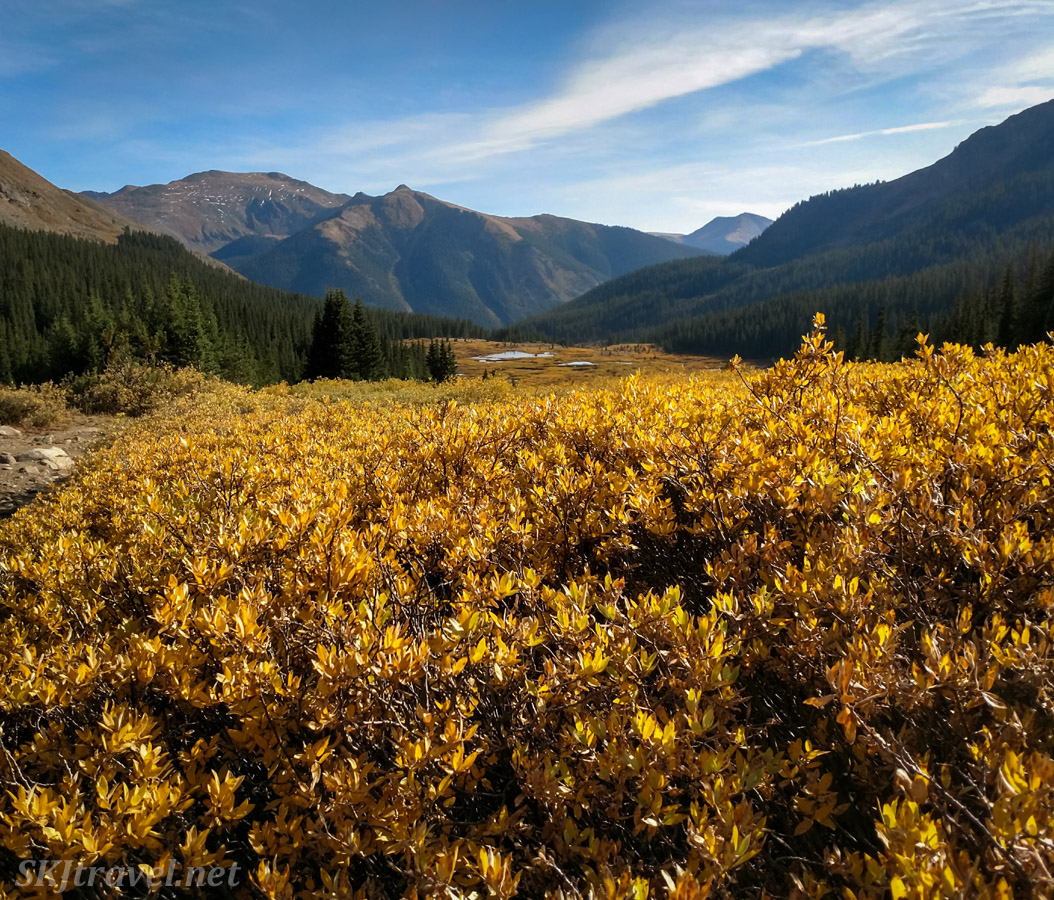 The other is Warden Gulch. The road ends in a valley at a few splintered remains of a mine with completely gorgeous views of the surrounding mountains. It made an excellent lunch spot. 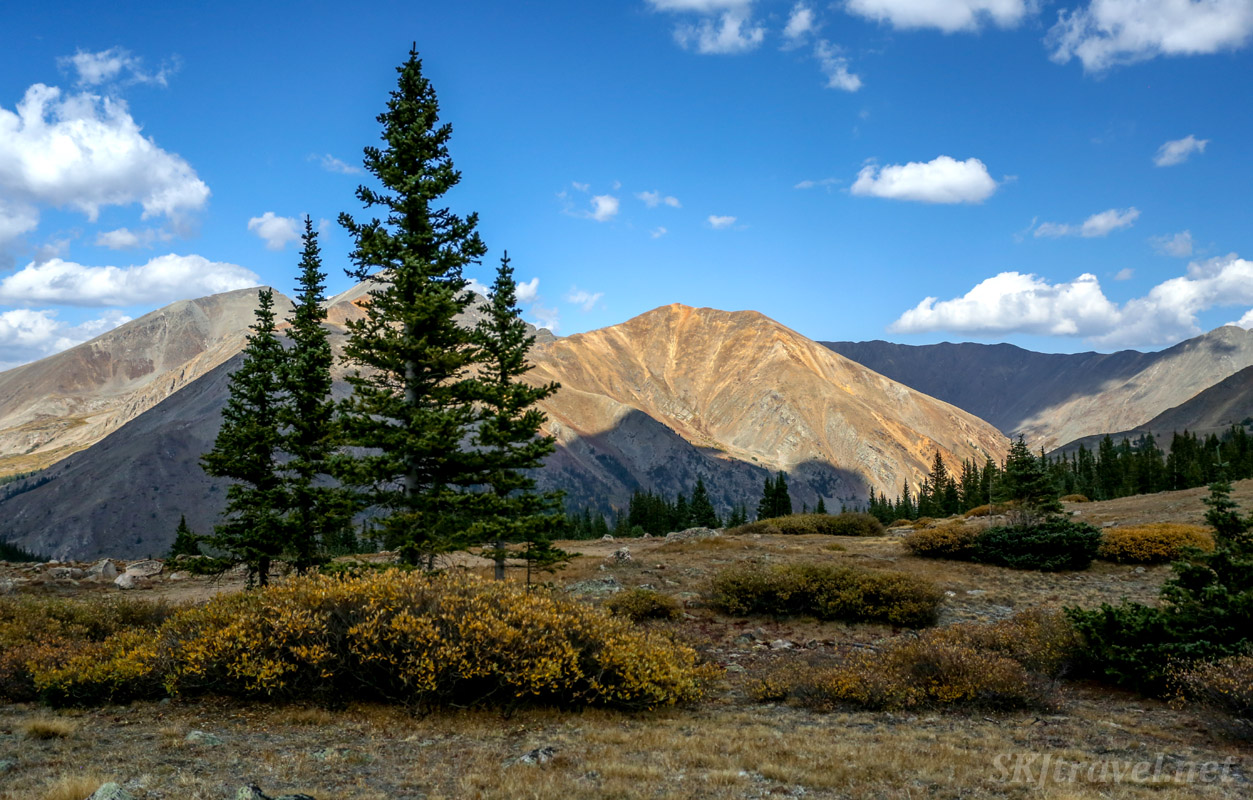 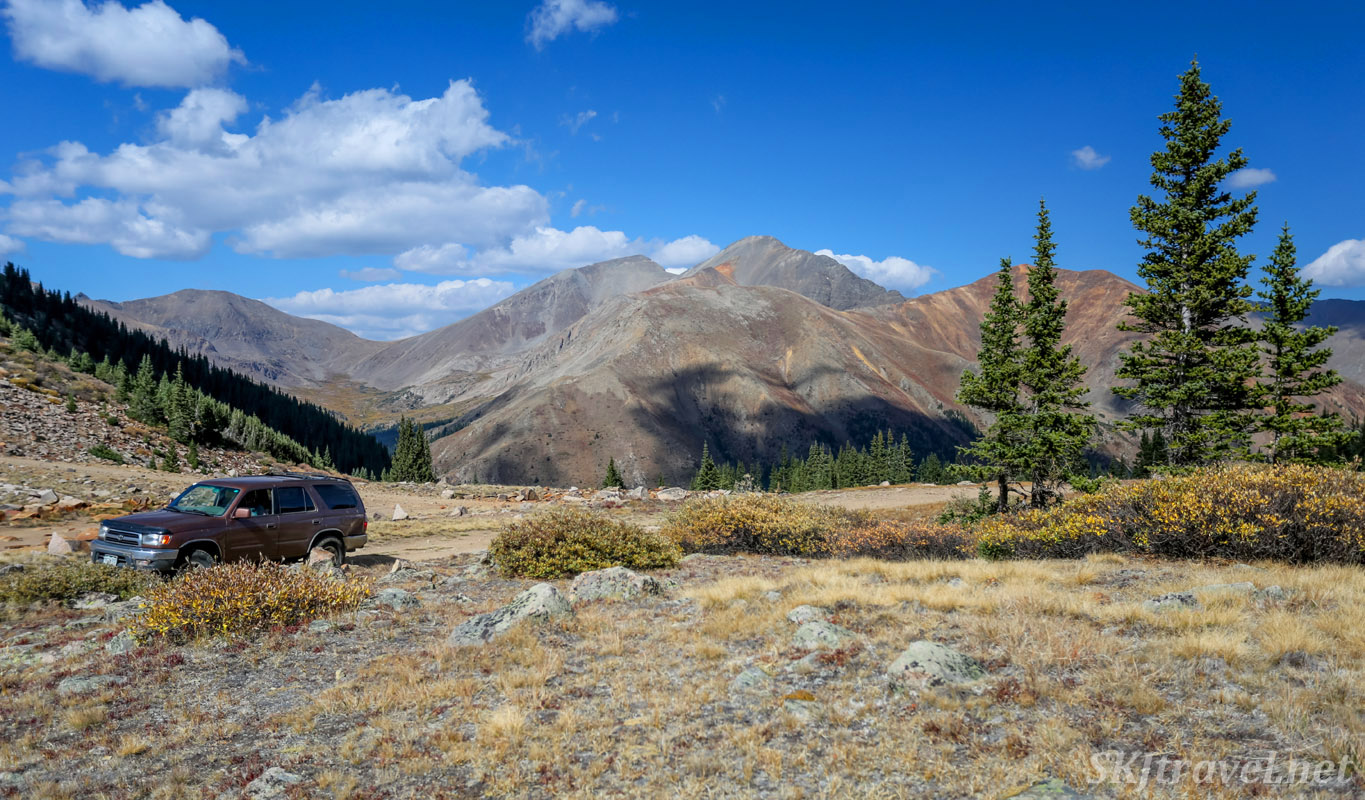 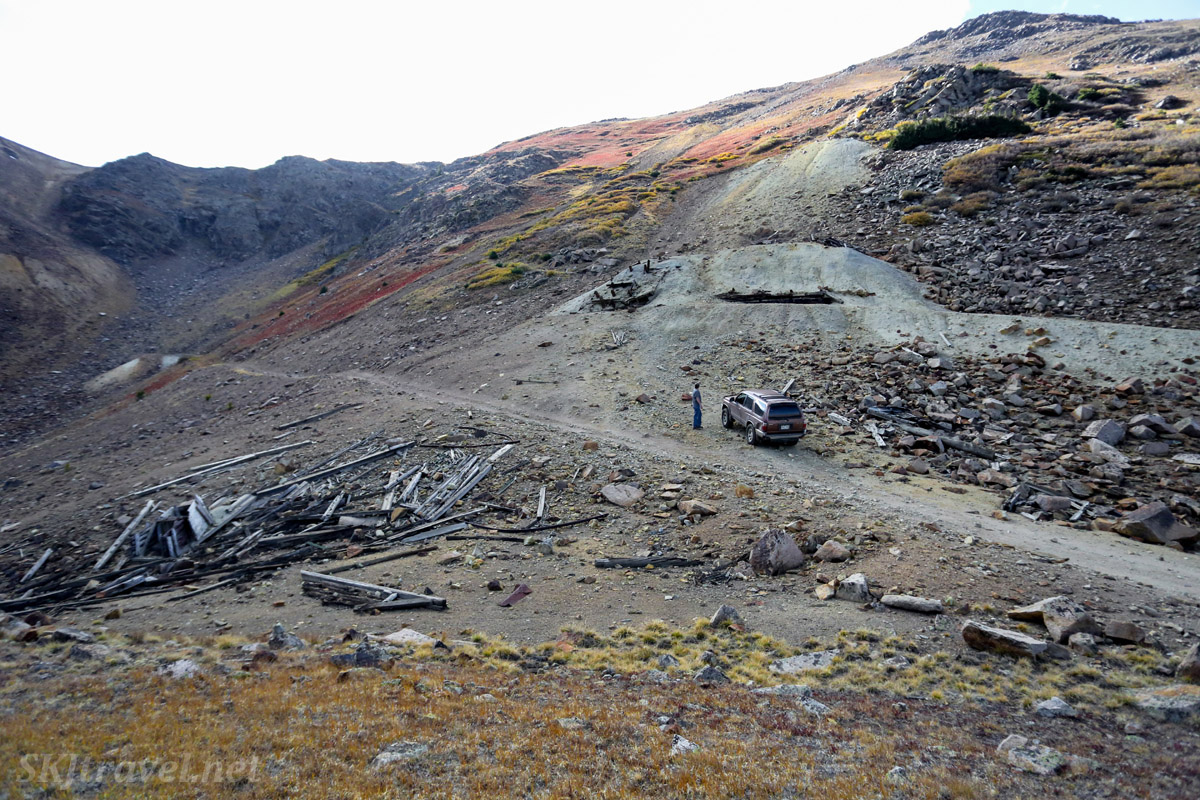 I put Santa Fe Peak on our itinerary based on the recommendation of a fellow we met at the two Colorado Gambler 500 rallies we've been to. The description in the main source I was using to plan and judge the difficulty of routes also suggested it would provide excellent views and wasn't too hard. Well, part way up this trail is when Erik realized he really, really did not like driving these very narrow roads with loose rocks and nothing but sheer drop-off on the outside. You can just make out another vehicle parked facing uphill at the switchback below us. 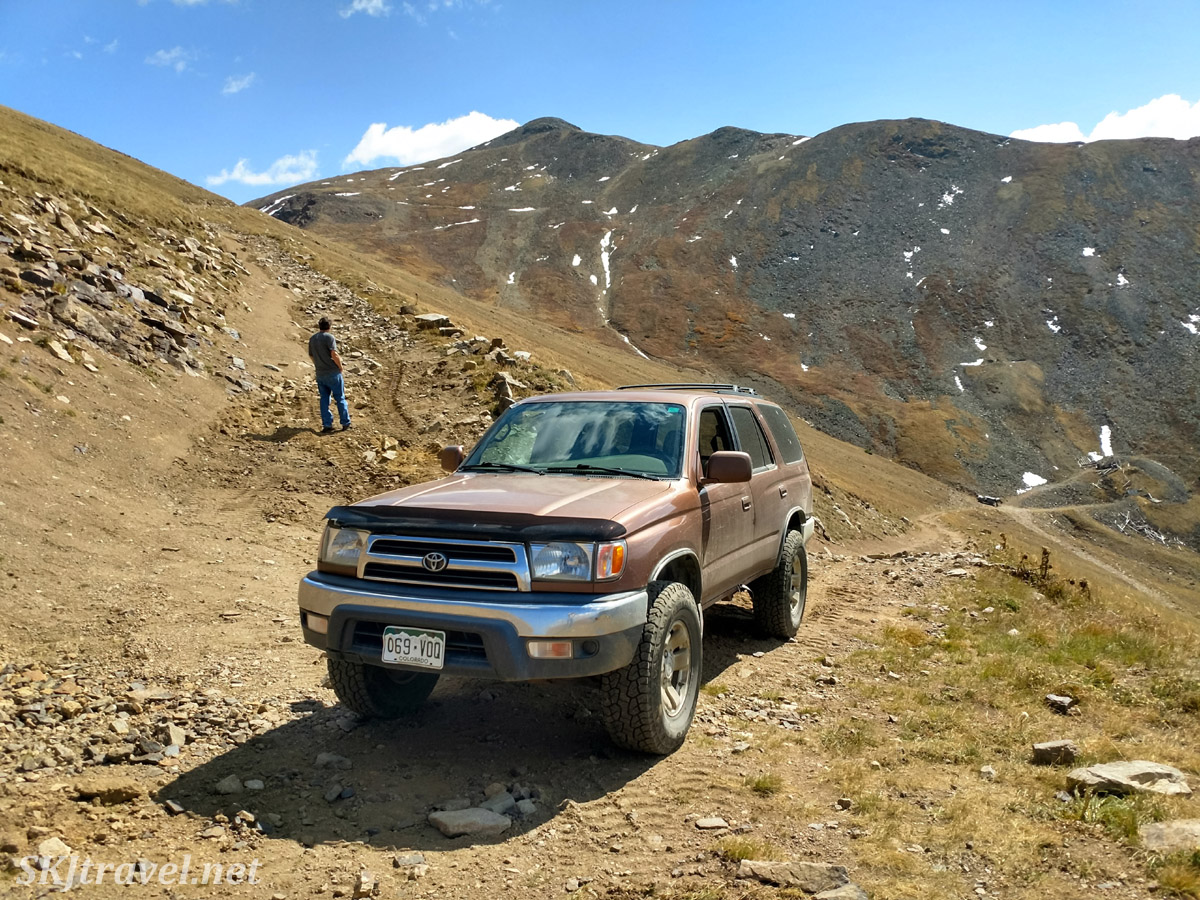 In between the two switchbacks is when Erik realized this and got a bout of vertigo. We stopped and got out to walk it off and decided it wasn't worth continuing if it was just going to be stressful and not fun. If the driver isn't having fun, neither is the passenger. So we went back down and stopped to talk to the folks on the lower switchback. They had done the entire route two days earlier and said that's why they were stopped there on that switchback ... the guy was an experienced driver (his wife said he is usually "fearless") and he said he kind of regretted having done it because he'd never been so scared in his life. Haha. Basically it only got narrower with looser rock and steeper cliffs and they felt the view was just as good at the top as where they had stopped. So while I already wasn't feeling bad about turning around, it was nice to talk to those folks and feel justified for having done so. I later read a description of it that said, "May be intimidating for novice drivers." Erik is anything but a novice, and it sounded like the other guy wasn't one either. So I believe it's more correct to say intimidating for people simply not keen on narrow shelf roads on super steep treeless mountainsides and those who feel vertigo.

(It was this experience on Santa Fe that helped us decide to turn around at the North London Mine without much hemming and hawing when we saw Mosquito Pass looking a bit similar.)

Webster Pass connects Montezuma to Highway 285 north of Fairplay and is one of the higher roads in the state, crossing the Continental Divide at 12,100 feet. This also was underrated on the site I was using as my primary source. It said pretty much nothing about it except that it was a connector from Highways 6 to 285 and rated easy. This was essentially true of the north side -- you need a high clearance 4x4 but we didn't find anything actually challenging. The south side of the pass is a different story even though there is nothing technically challenging there either. But first let's stop at the top and marvel at this rather surreal landscape. The colors really reminded us of Haleakala Volcano on Maui. 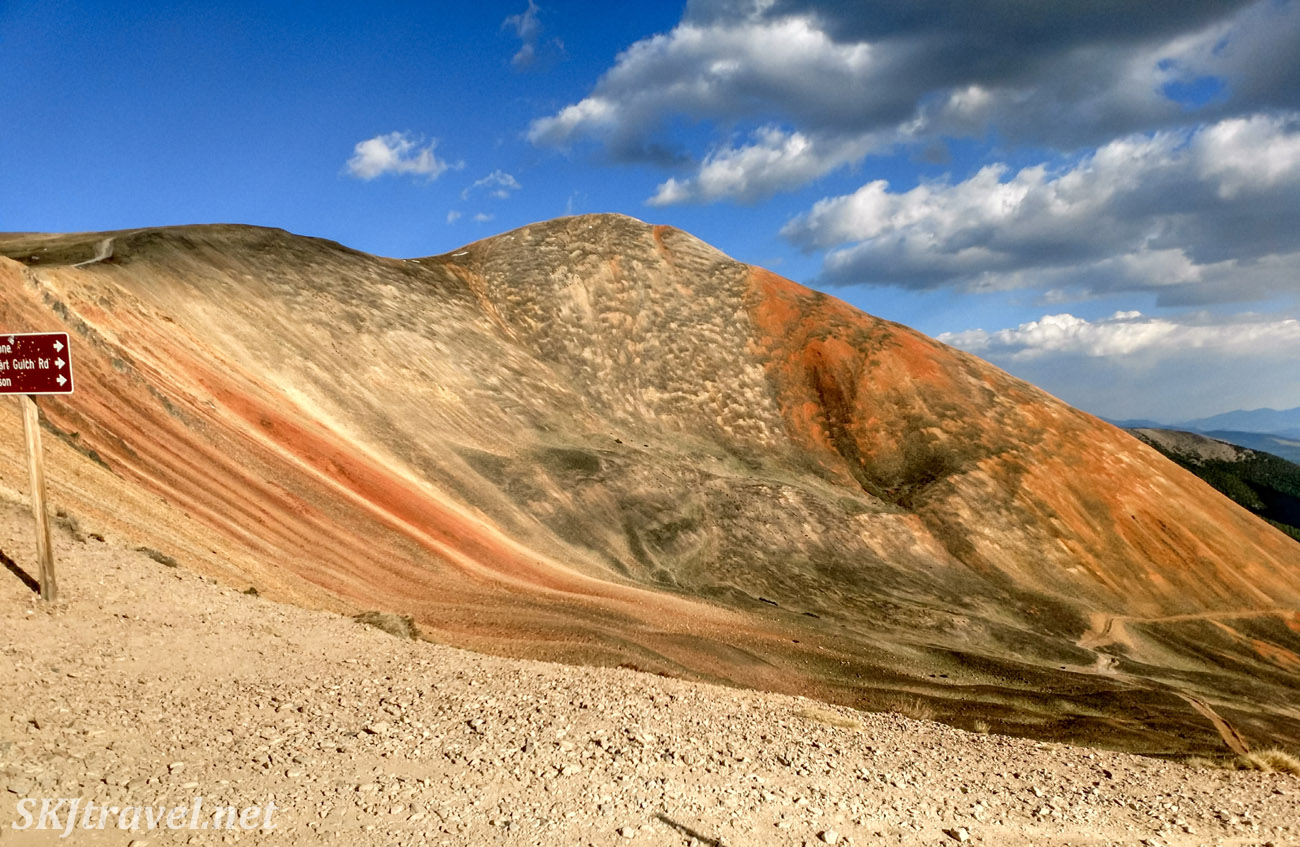 After we got home I looked the pass up on some other websites and found most of them more accurately described the south side, pointing out the width of the shelf road with loose rocks and hairpin corners and the sheer drop-off. But to be honest, there is really no indication of this from the north side -- it's only obvious once you're looking down from the pass. As we came to the bottom of the south side, we saw signs there warning people heading up, "Experienced 4x4 drivers only," and "Road narrows, not suitable for full size vehicles, no turn around beyond this point." I guess maybe they figure you can discern that for yourself from the pass looking down, haha, but you might not know it starting up still below tree line. 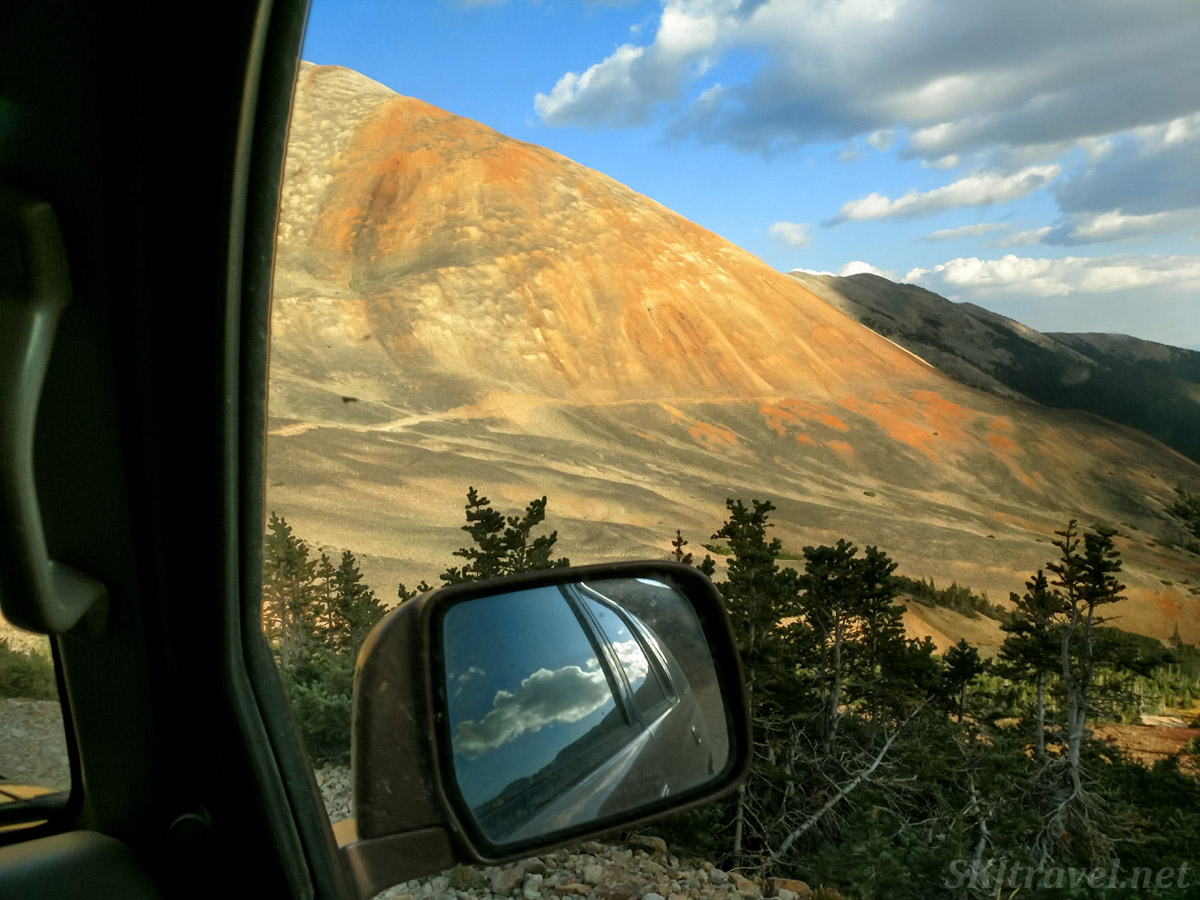 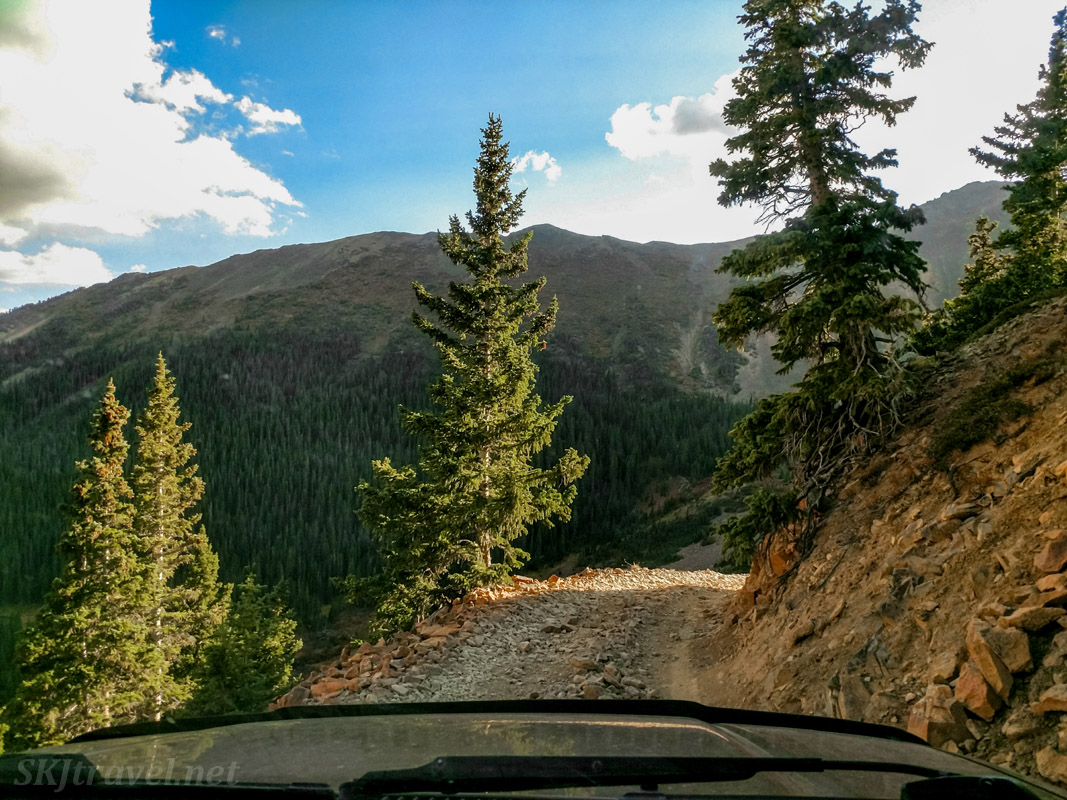 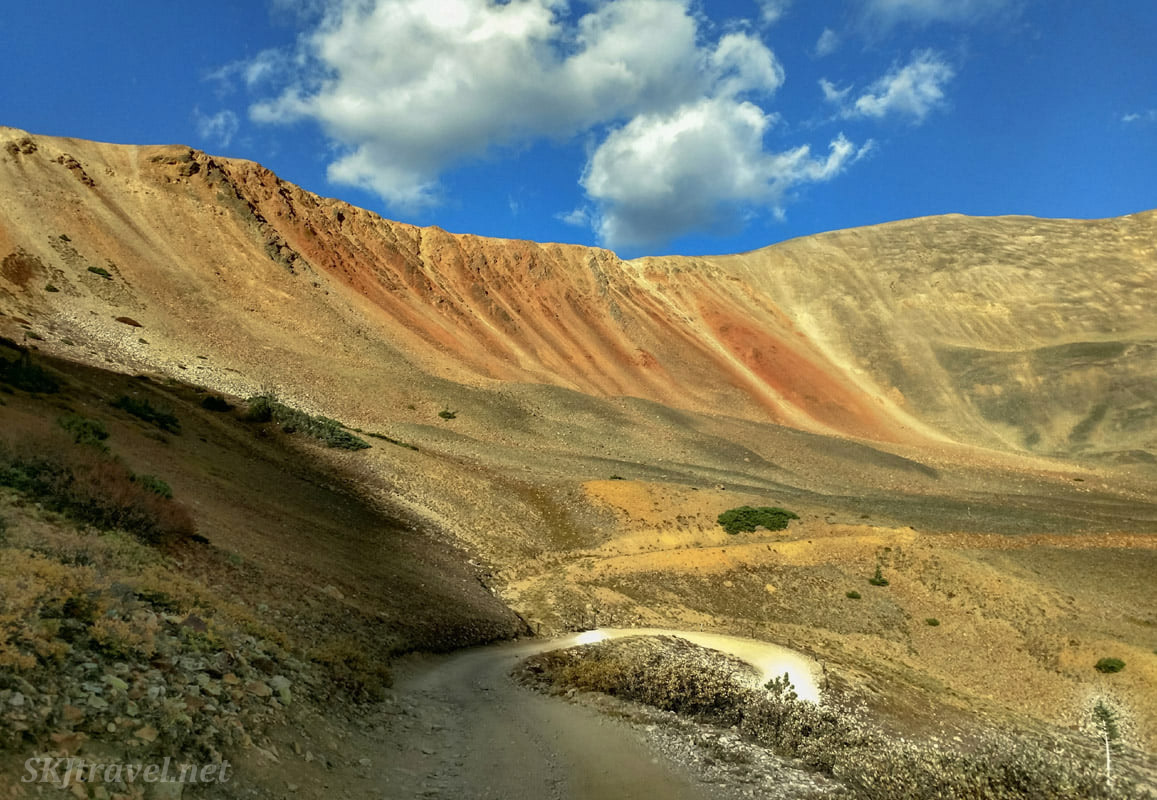 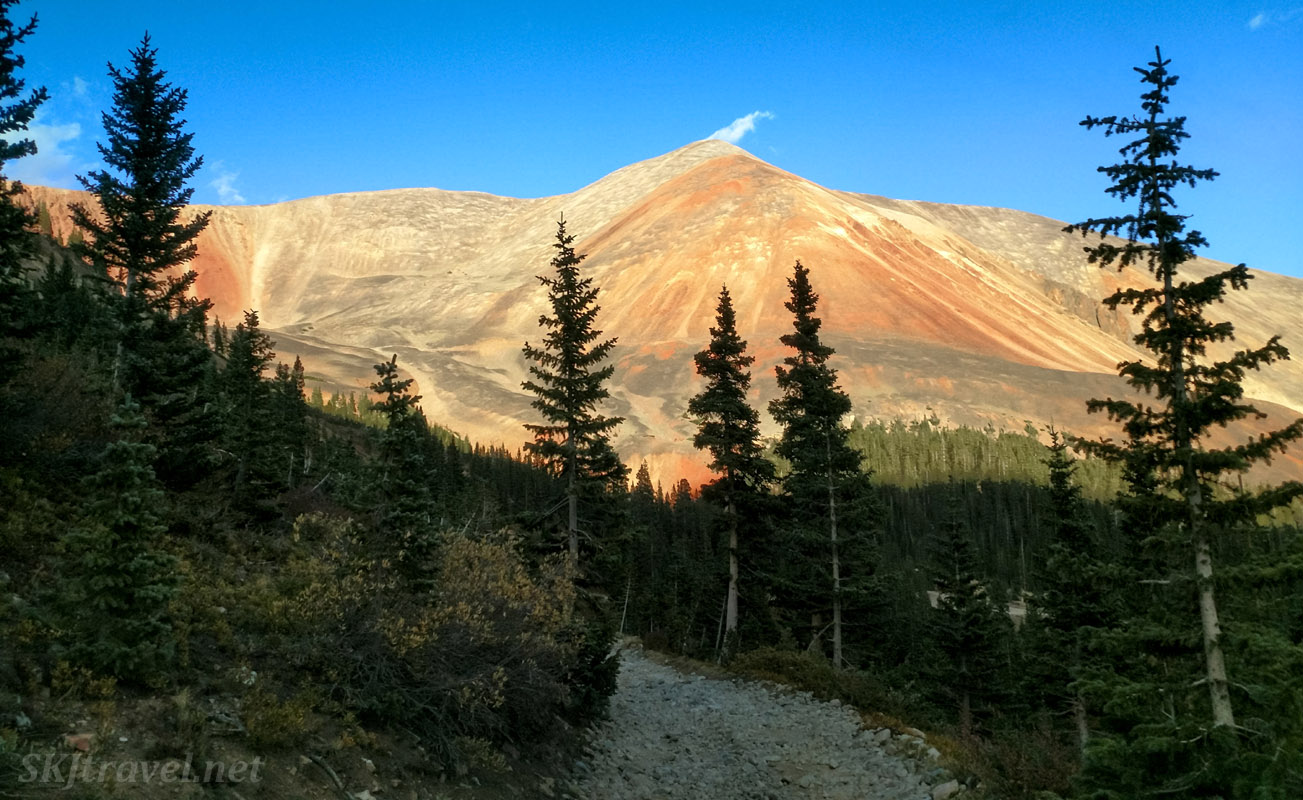 But after Googling Webster Pass I see plenty of photos and videos of SUVs on the pass, so we weren't exactly scofflaws by driving our full size vehicle. But what was a little unnerving is I saw photos of vehicles both descending and ascending the south side. And the sign speaks truth: there is no turn around, so I don't know what you'd do if you met another vehicle, as there is also zero room, as in *zero,* room to pass and backing up or down the narrow rocky ledge would be eight steps beyond hair-raising. From the pass you can see most of the road and could probably tell if someone was coming up and wait for them, but I'm not sure that's true from the bottom of the south side.

So in spite of the precise kind of road that gives Erik vertigo, it was worth going down that for this view. Therefore in retrospect I'm glad I didn't read the other write-ups because we might have avoided going there, and we're both glad we didn't, even though Erik's shoulders were tightened up high enough to about brush the bottom of his ear lobes. Fortunately, wise or not, I always have faith in Erik's driving so it really wasn't stressful for me as the passenger.

Another day we entered this network of trails from Breckenridge and came out through Montezuma on Deer Creek trail, which is not difficult. We decided to check out an unnamed side trail that was a little more challenging and were delighted with what is these days a rare find -- a mine entrance that hasn't been intentionally (or unintentionally) collapsed and has the cart tracks still intact leading in. I don't know anything about it as far as when it was last mined, so I'm not sure why it has remained in such pristine condition. Because of its condition, though, I'm not inclined to reveal any more information about its location. Too many jerks these days who go around ruining things for everybody. Just enjoy the photo. :-) 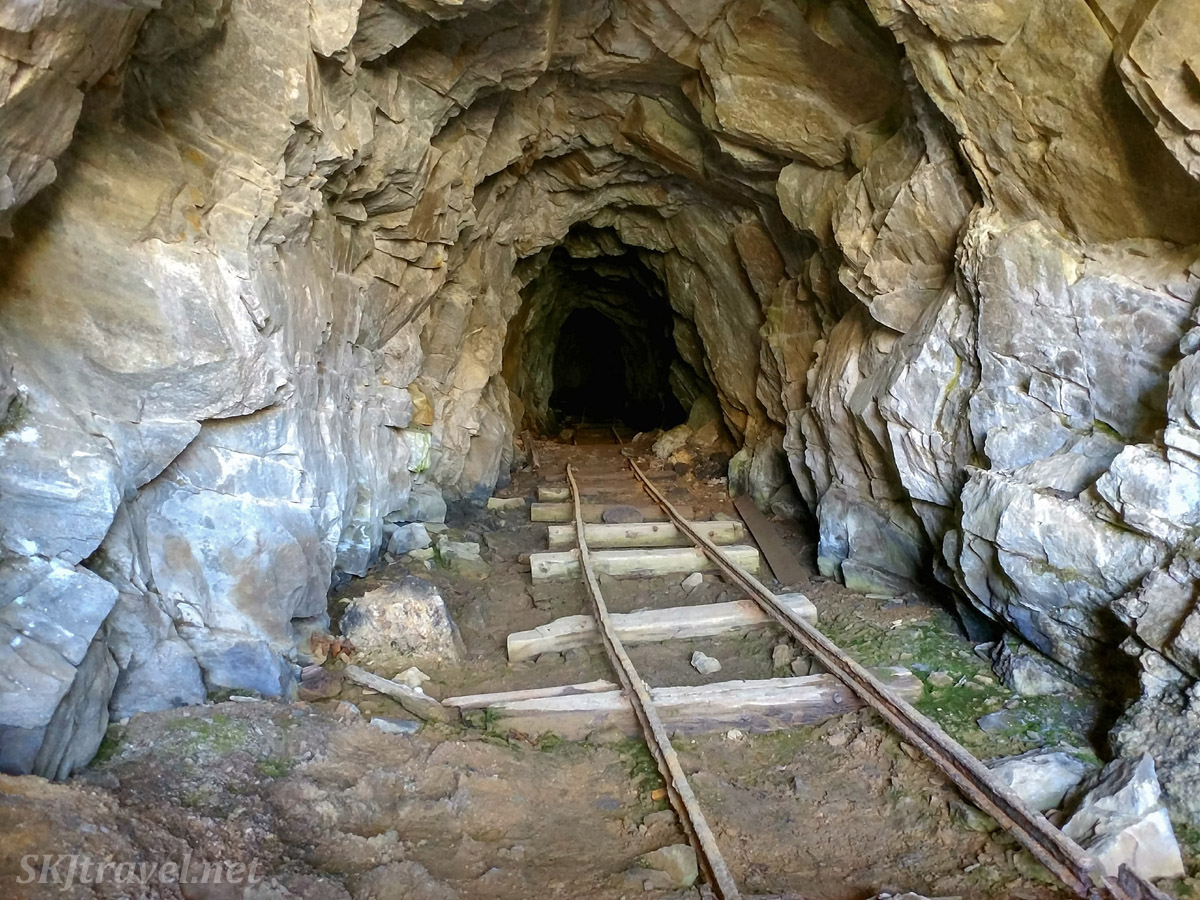 A car below the mine who has seen better days. 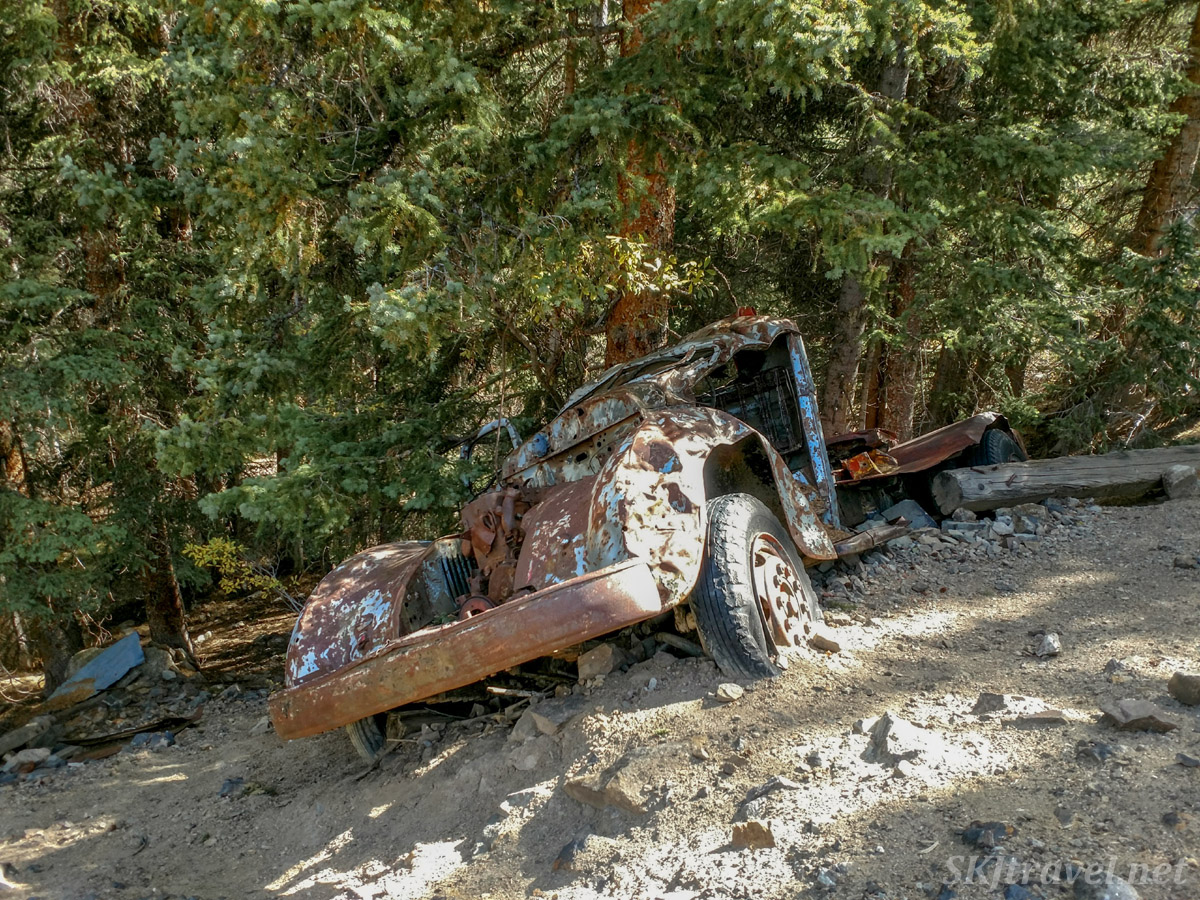 And our trusty 4Runner, Chewie, who is in his prime. I love him and I was happy to spend a whole week with him in this area when we otherwise spend so much of our 4x4 time with Pinzy (our 1973 Pinzgauer) these days. 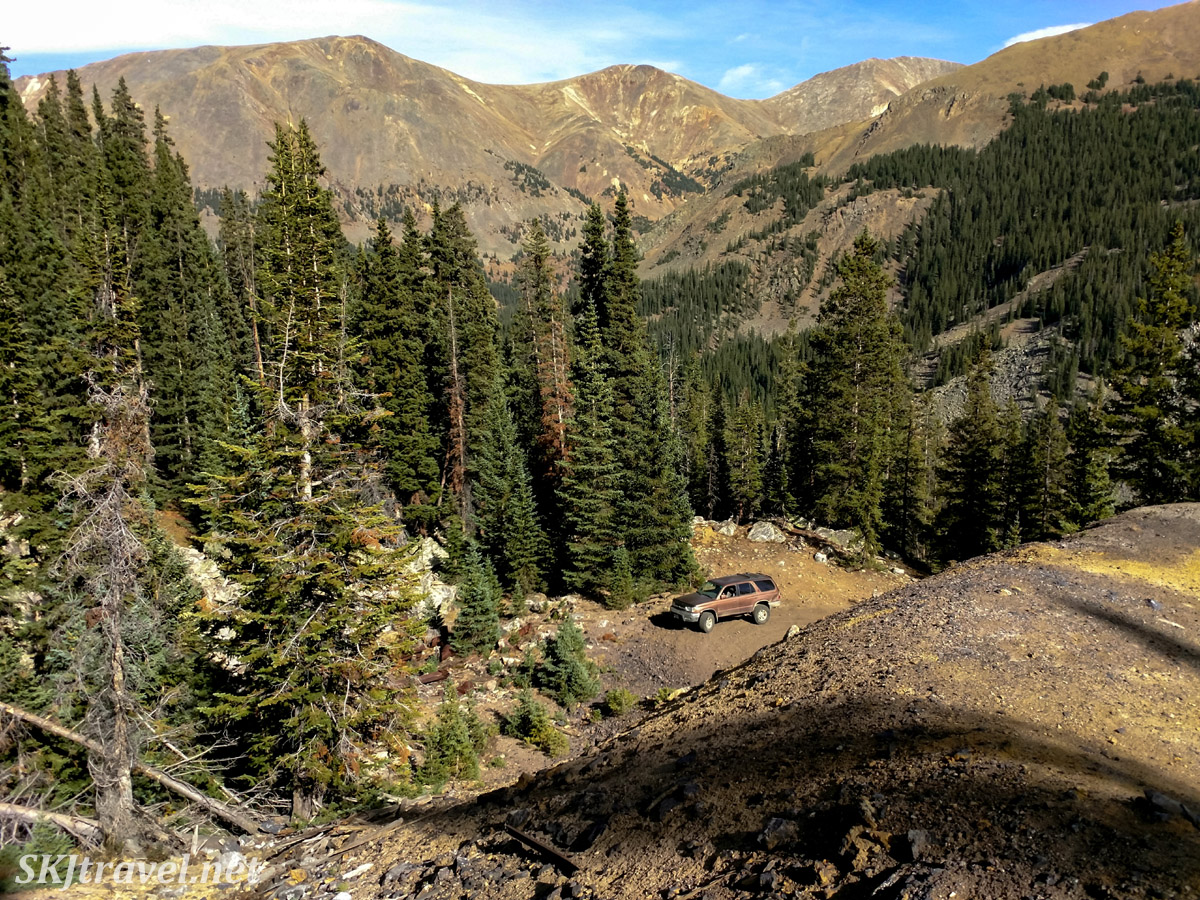