I hadn't thought I would make a post about our afternoon in Guffey, but so many people were interested in some of the photos I took there when I posted them on Facebook, I decided to share some more on the blog. 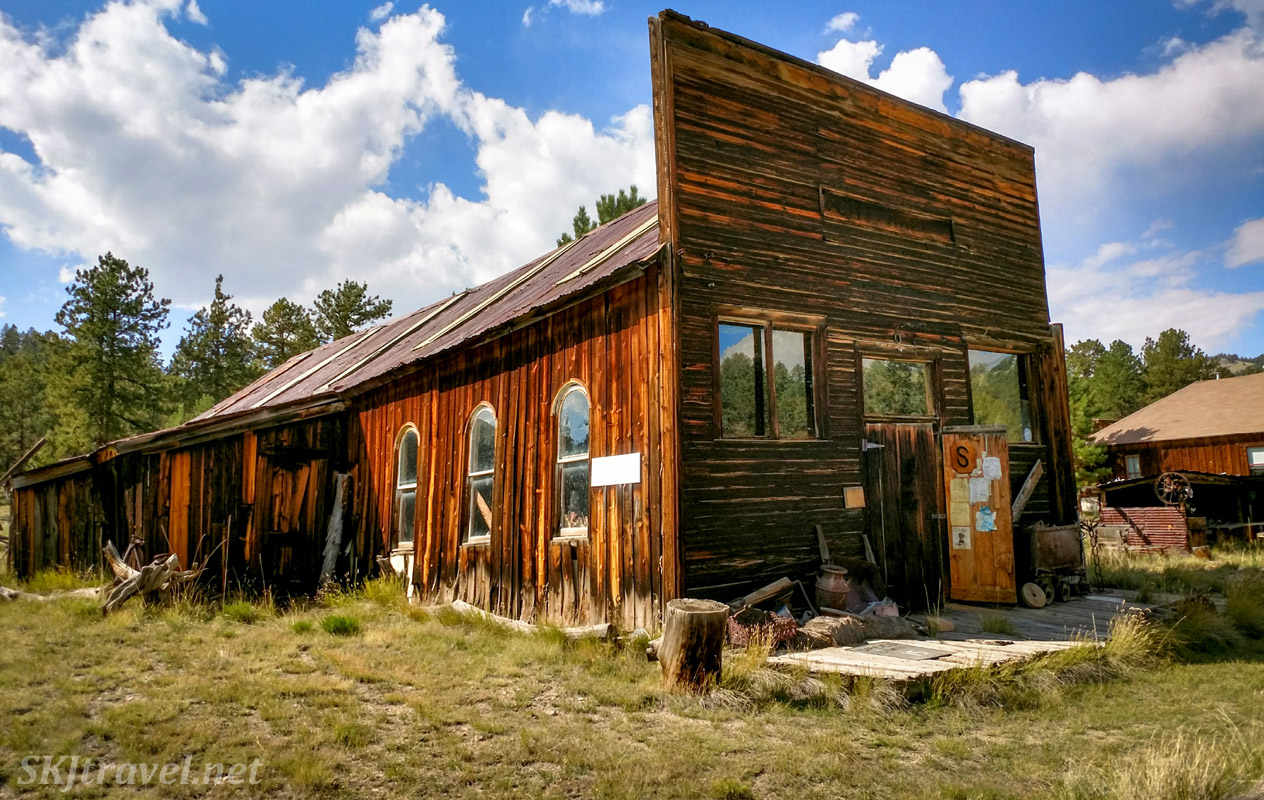 Erik had been wanting to see this place for some time because he'd seen photos other people posted on a Colorado Facebook group. When we found ourselves in relatively close proximity, staying in Breckenridge for a week, we decided to take a day to check it out. Erik thought he knew how to get there and we thought we had the area pegged on the COTREX maps we had downloaded onto my mobile phone. After turning around several times in great confusion over the disparity in Erik's thoughts and the map's information and our driving experience, we decided we needed more information. I don't have a SIM card in my phone so I don't get cell reception, I can only connect to wi-fi. So ... we needed to find wi-fi out in pretty much the middle of nowhere.

Fortunately there is one teensy town in that nowhere and it had a bar and restaurant. It was right on the side of the highway (2-lane highway). We decided to ask if they had wi-fi and they did. We figured we should give them some business while hooking to their wi-fi so we settled in for a light lunch and a couple beers. This was the first and only (still to date as I write) restaurant we stepped foot in since returning home from Morocco when the COVID pandemic exploded mid-March. There was only one other couple eating on the patio, so we sat out there.

It's funny the difference between the last restaurant we ate at before the pandemic and the next restaurant we ate at during it. Restaurant #1 total opulence in Marrakech, insane 5-course meal and all the wine we could drink (you can read about it HERE); Restaurant #2 on the side of a highway with nothing else around for many miles, fumes from the occasional 18-wheeler and other vehicles wafting into the patio, extremely basic food and domestic beer. Complete opposite ends of the scale. But we enjoyed our tacos and beer and especially enjoyed getting our bearings with the wi-fi and figuring out where we needed to go.

So onward-ho to the town of Guffey -- population: 49 we were told, but I read it's significantly less in the winter; mayor: a black cat. 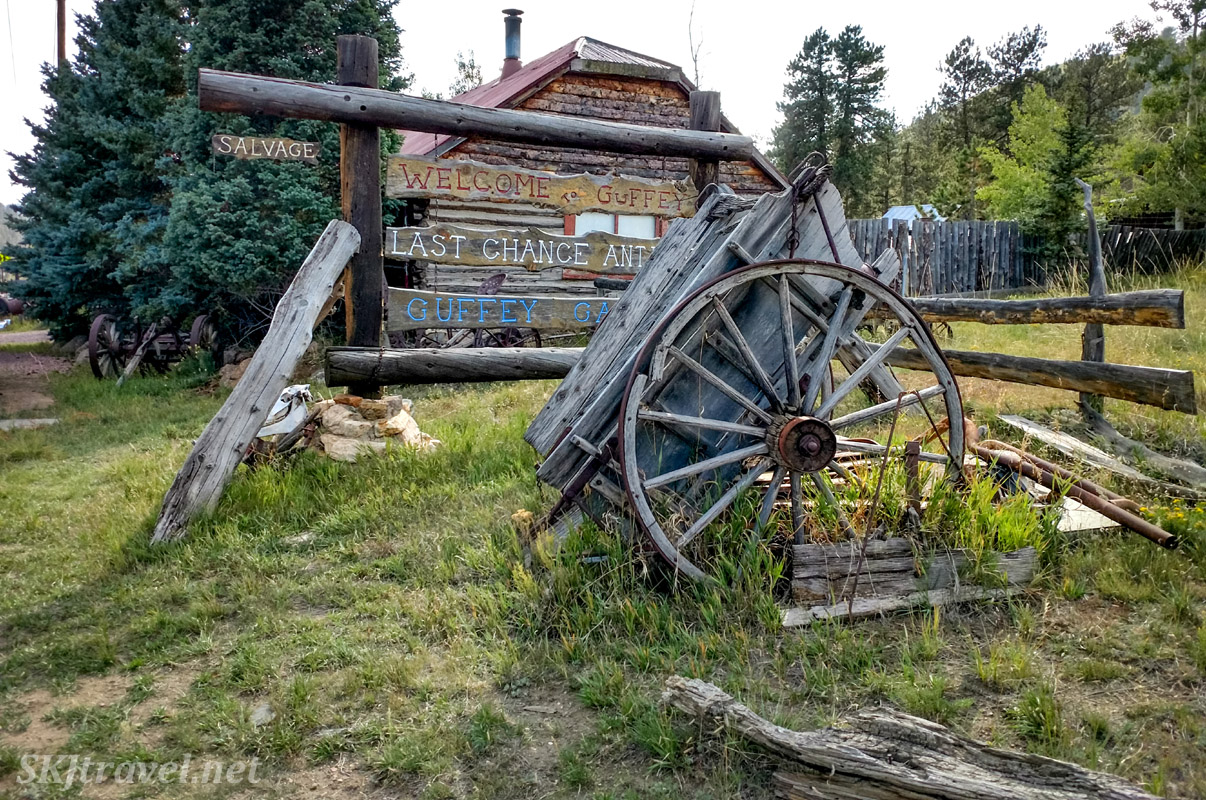 "Guffey was originally known as Freshwater and was incorporated in 1895. An article in the February 26 edition of the Colorado Daily Chieftain describes the camp: 'Freshwater, a bustling little camp of fifteen tents, was found... There seemed to be no drones in the camp; all were actively engaged in doing something that would result beneficially. Surveying was going on all around and it looked business from one end to the other.'" I think this is a very funny write-up commenting on the productivity of the inhabitants. It makes me wonder if it was common to have a lot of slackers in other mining camps.

The website goes on: "The name was changed to Guffey in 1896. The Guffey post office was opened that year. A newspaper was established, aptly named 'The News.' The Chieftain reported the progress of Guffey in December of 1896 ... 'This district can no longer be regarded as a mere prospect camp. After a most careful investigation the Des Moines Milling company found pay ore on nineteen dumps all within two miles of Guffey. ... Guffey is making a healthy growth now having a population of 600 bright, energetic people." Again the comment on the productive character of the people.

"Despite early optimism, the mines of the area never became significant producers. Guffey declined after 1900 but was sustained by ranching so it never died out completely. Today it is a minor tourist town still containing historic buildings and artifacts."

Other things of note: there was a famous 3-person murder there in 2000. Most other websites with a blurb about Guffey seem to find this the most notable thing about the town; I find it the least interesting thing to write about. In 1907, the largest meteorite ever recovered in the state of Colorado was found near Guffey. Most of it is kept at the American Museum of Natural History in New York, with a slice acquired by the Denver Museum of Nature and Science, which seems the most appropriate home for it.

Present-day Guffey subsits primarily as a tourist town, not for its mining history, murder or meteorite scene, but for the restored antique buildings and gobs and gobs and gobs of stuff collected primarily by resident Bill Soux. Part of the collection resides in the Guffey Garage, part in the old town hall, and the rest outside around a couple blocks of "downtown" Guffey. This is what draws tourists in the most, I think, the immense collection of utterly random old things and oddities. If you wanted to notice every single thing, I think it would take you more than a day.

There is also a great antique shop, Last Chance Antiques, with an interesting array of items for sale inside, surrounded by claw foot bathtubs on the outside. Two baby deer and an adult female were hanging around the store and by the bathtubs. The adult approached us and we kept still, hoping we wouldn't scare her away. Well not only did we not scare her, she was seeking some petting. She came up to Erik and then I got to pet her also. The guy manning the town said she was named Rose and was so tame she went to peoples' houses to hang out. Do you see the baby peeking at us below? 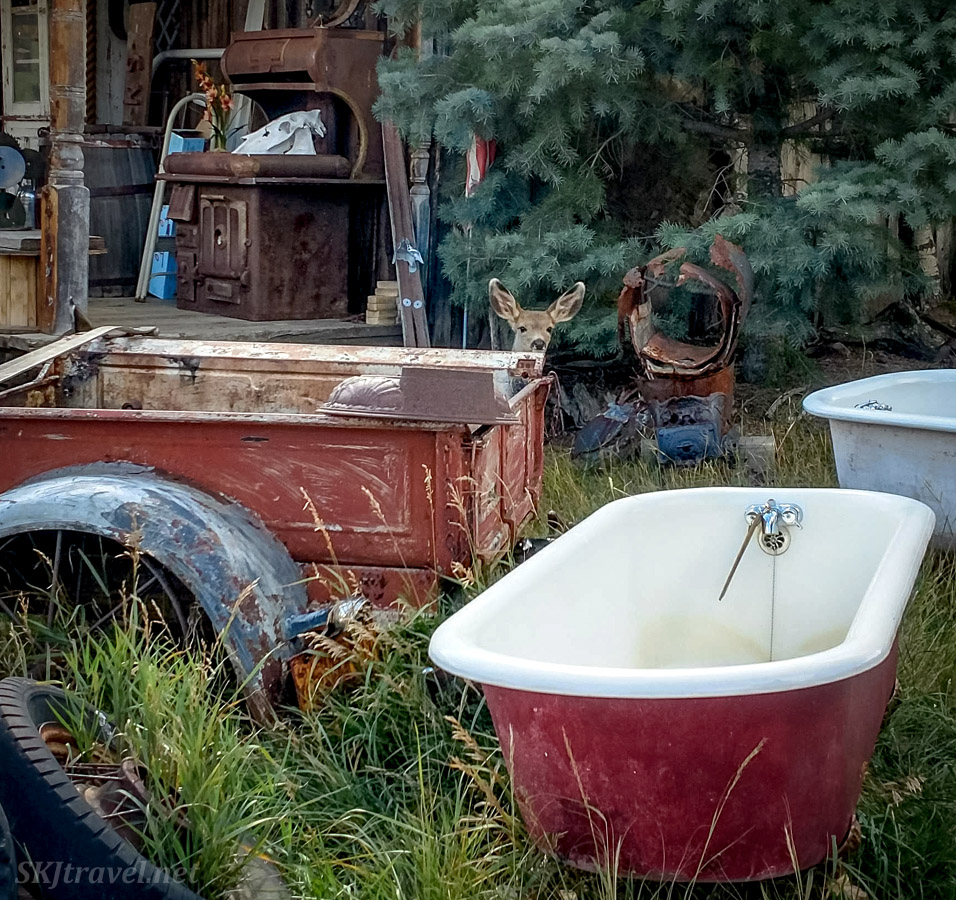 And here comes Rose walking along as if she's shopping for a bathtub. Then up to Erik. 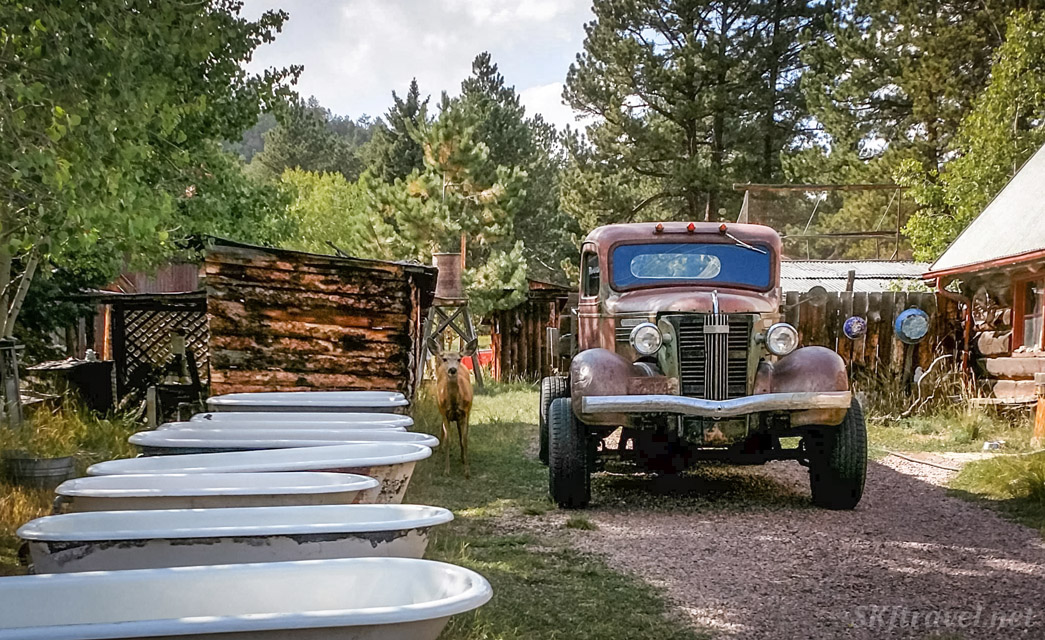 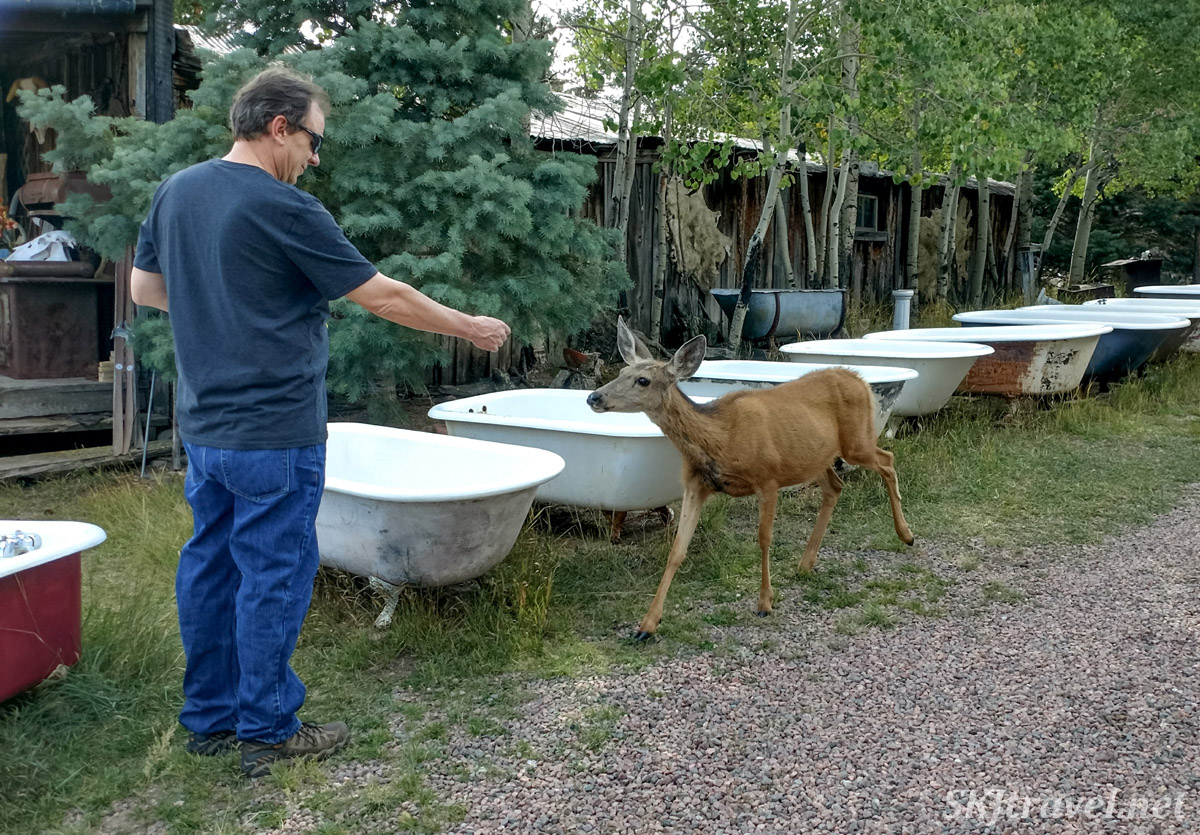 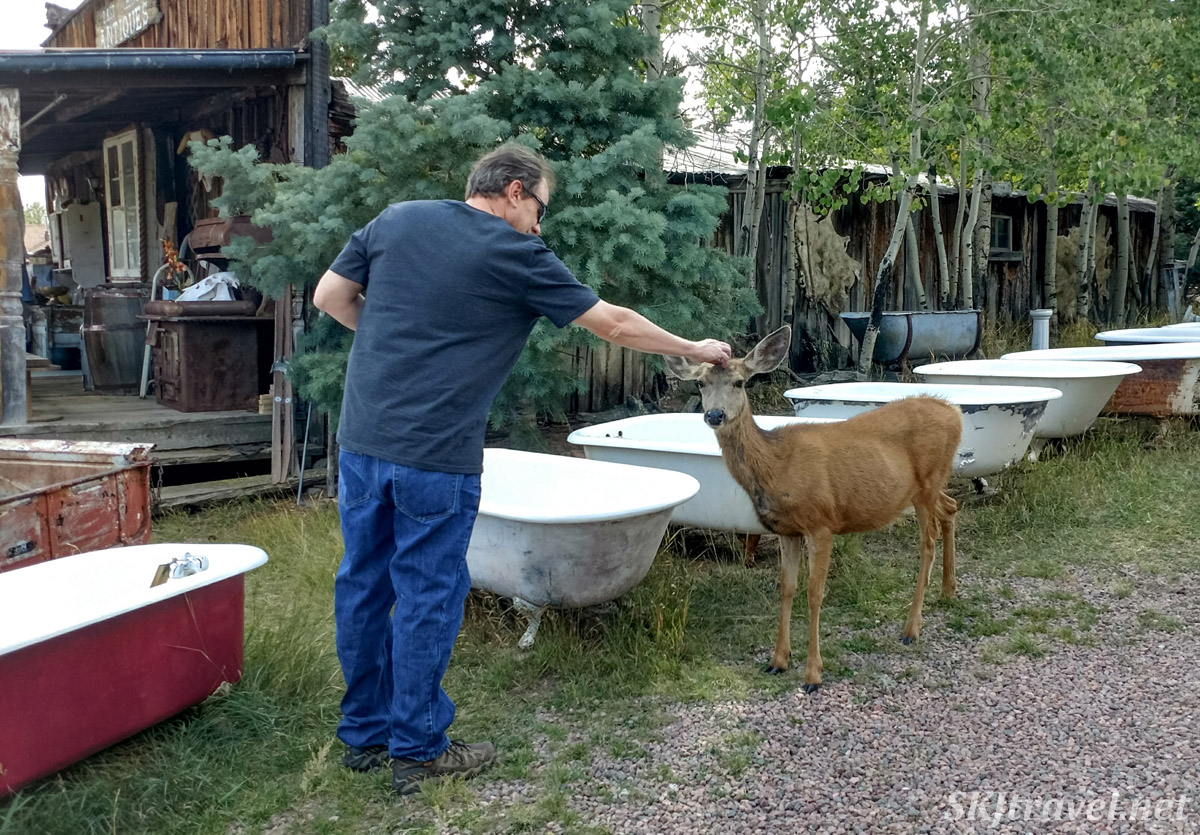 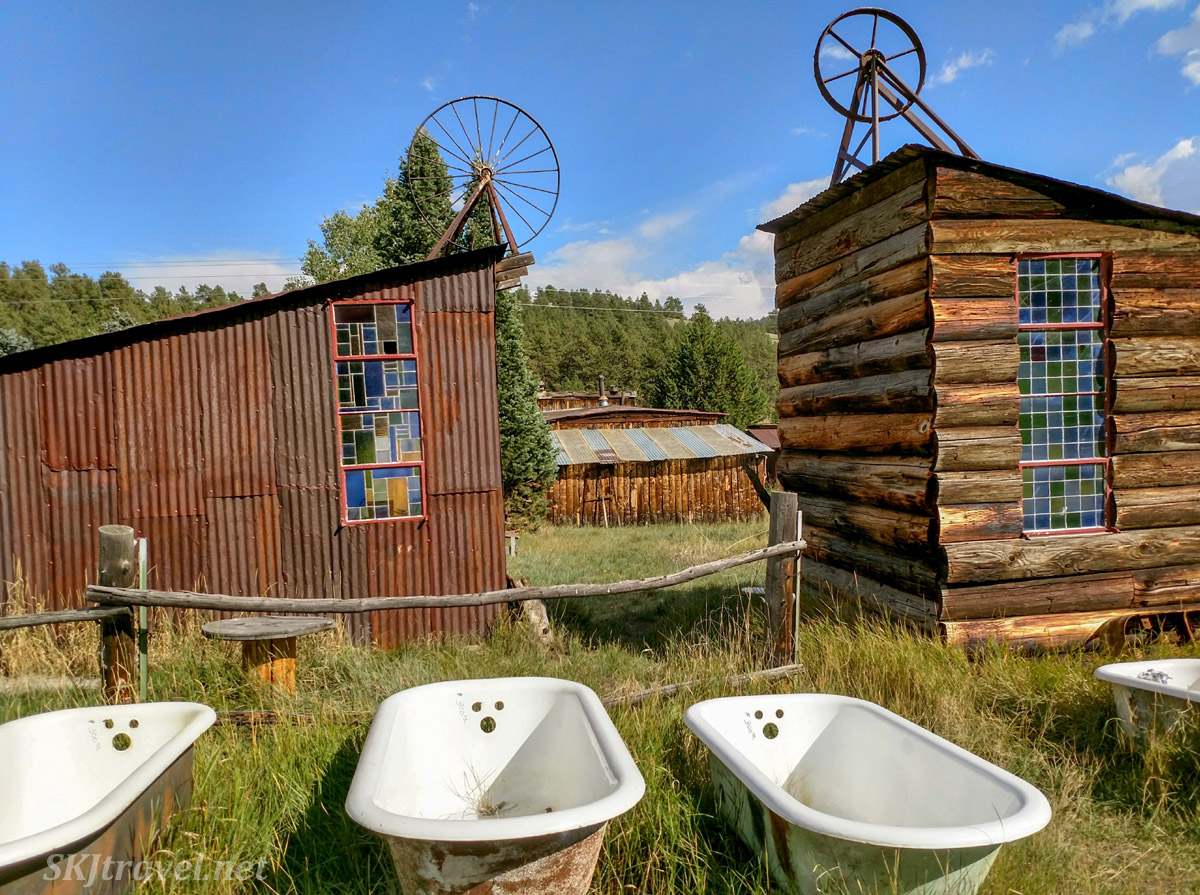 The rest of this post is a portion of the photos I snapped around town just to give you an idea of the variety and density of collected things. There is no admission fee to see anything, but they do politely ask for either a donation or to buy one of their items for sale (a tee-shirt or book, etc.). Well, we heard that the asking is not always particularly polite but the day we were there, a guy was substituting as the Welcomer/Watcher -- the person who can tell you about the place and give you the key to the town hall. He was super friendly and polite. We bought a book.

Spend some time trying to pick out the variety of random stuff collected inside city hall! 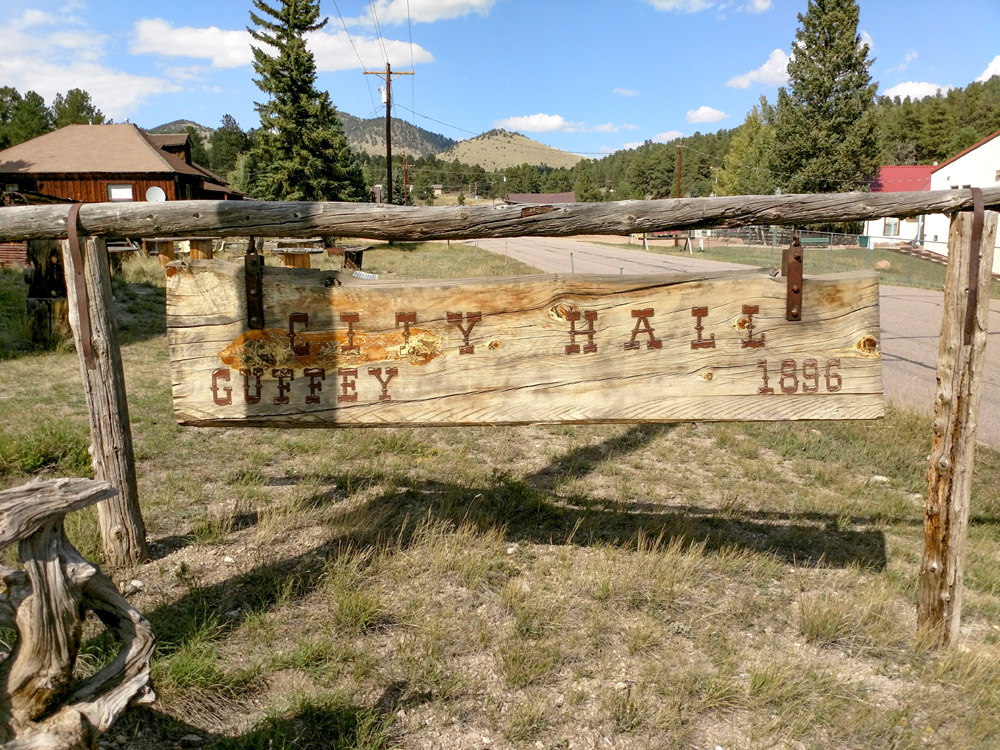 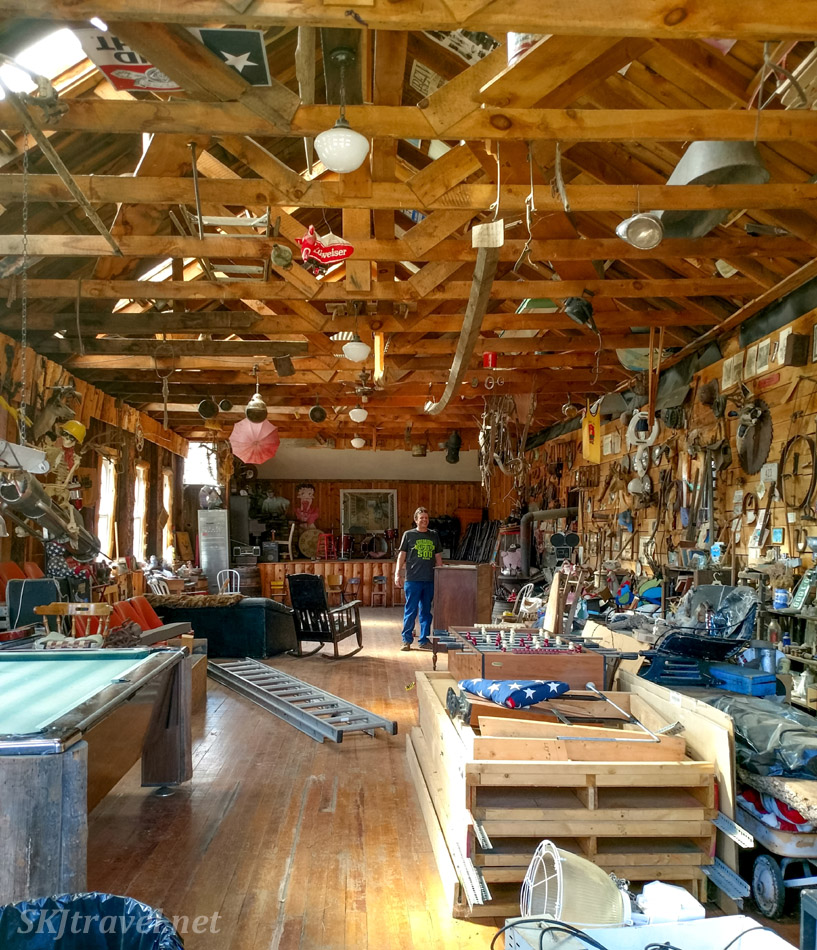 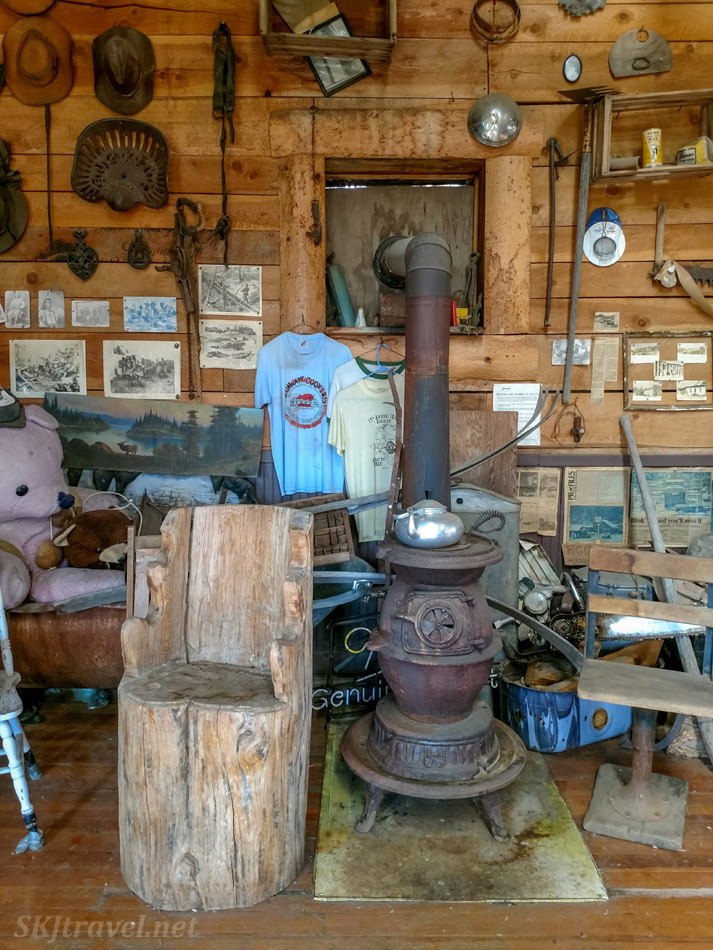 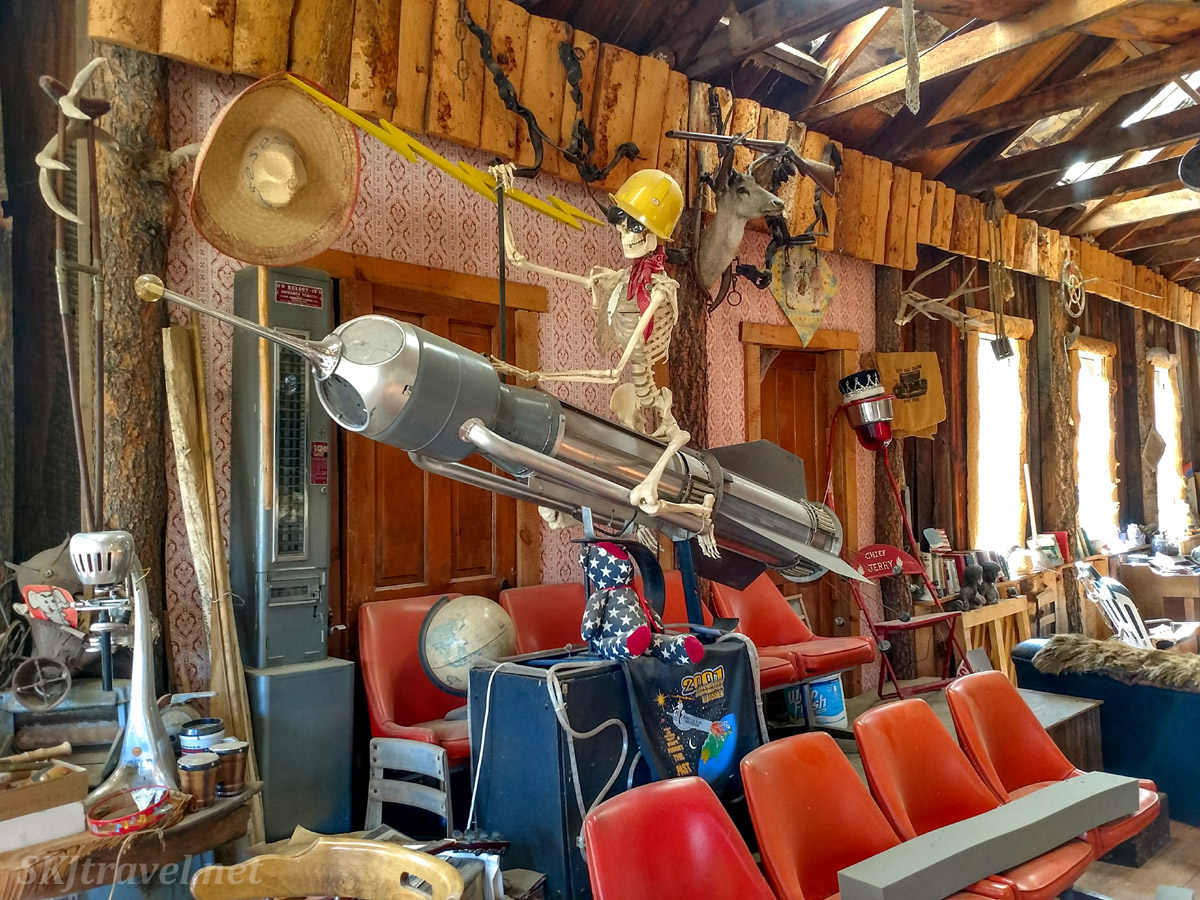 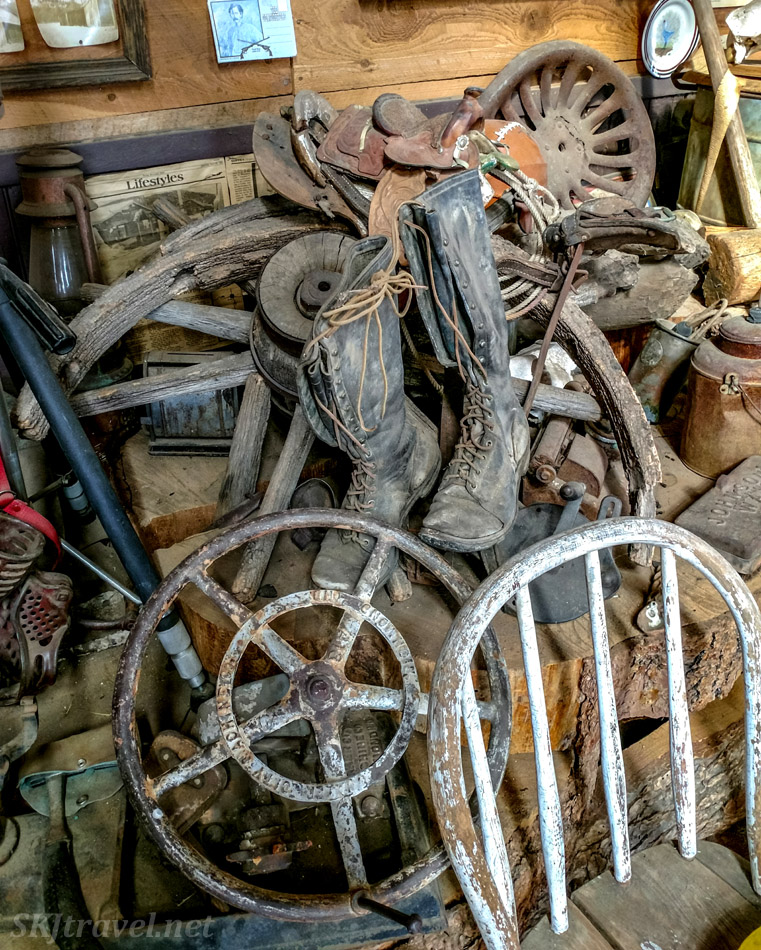 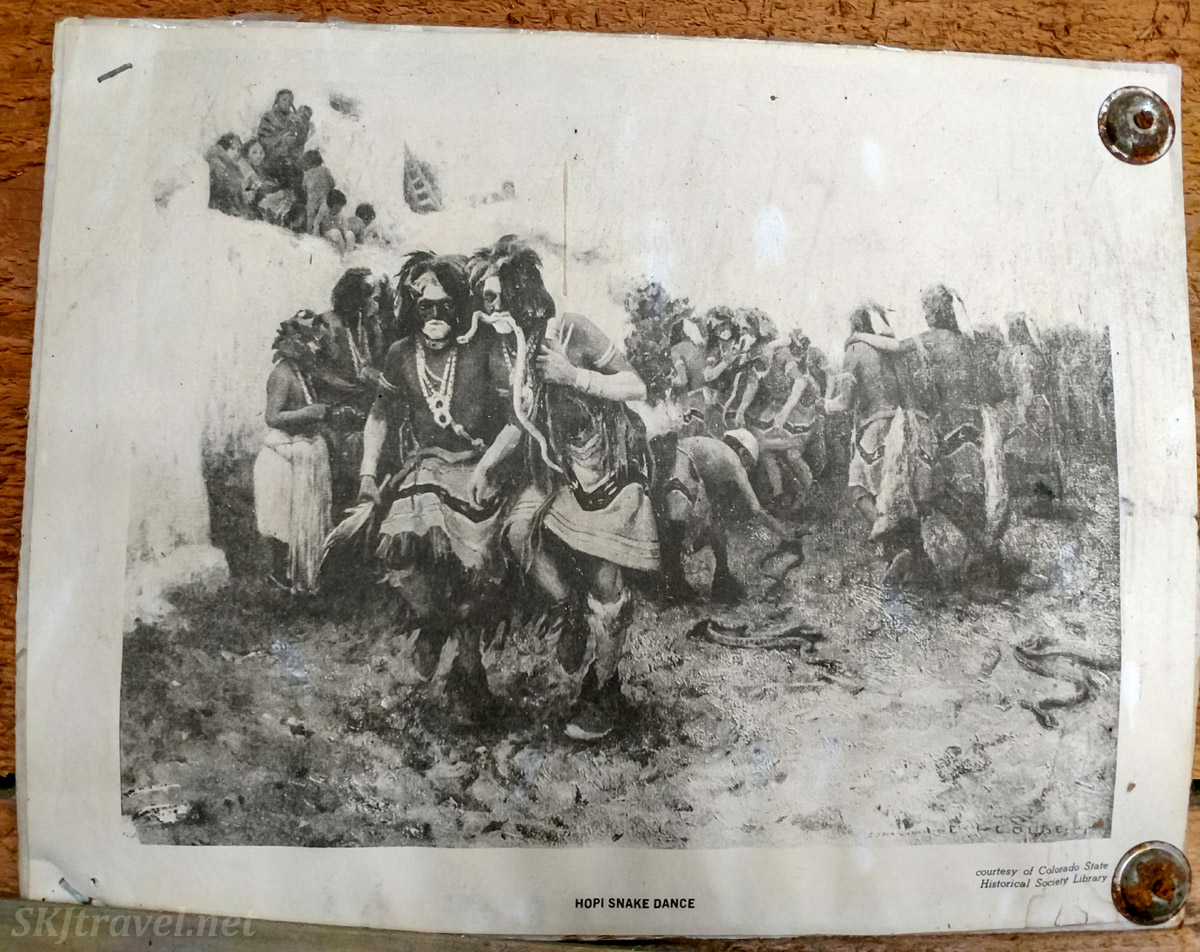 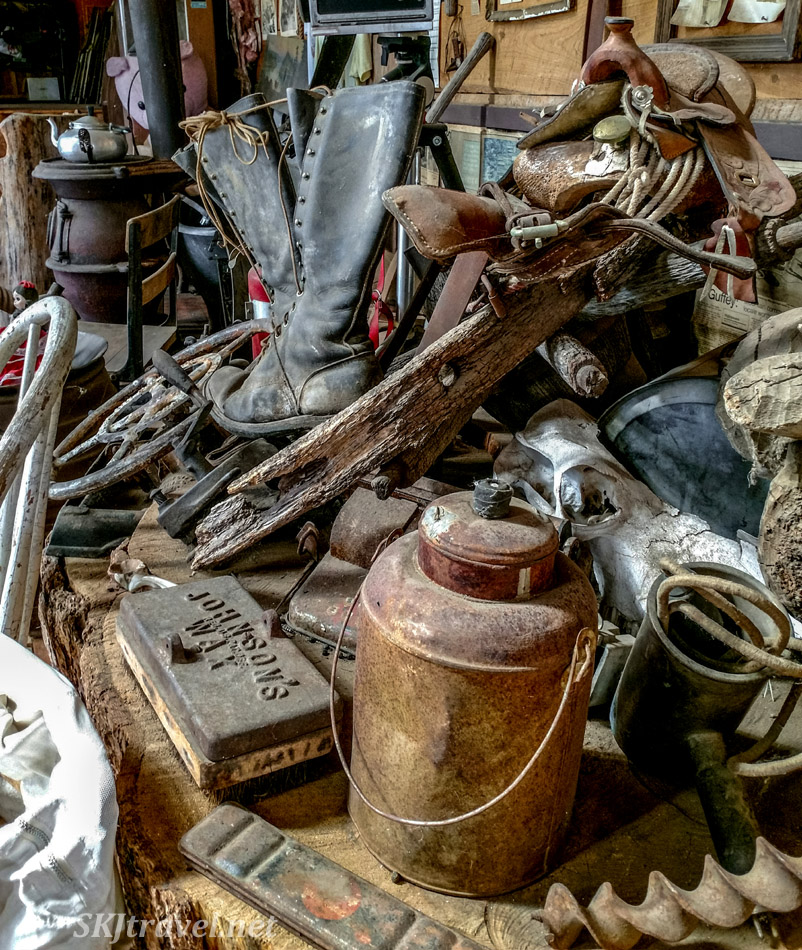 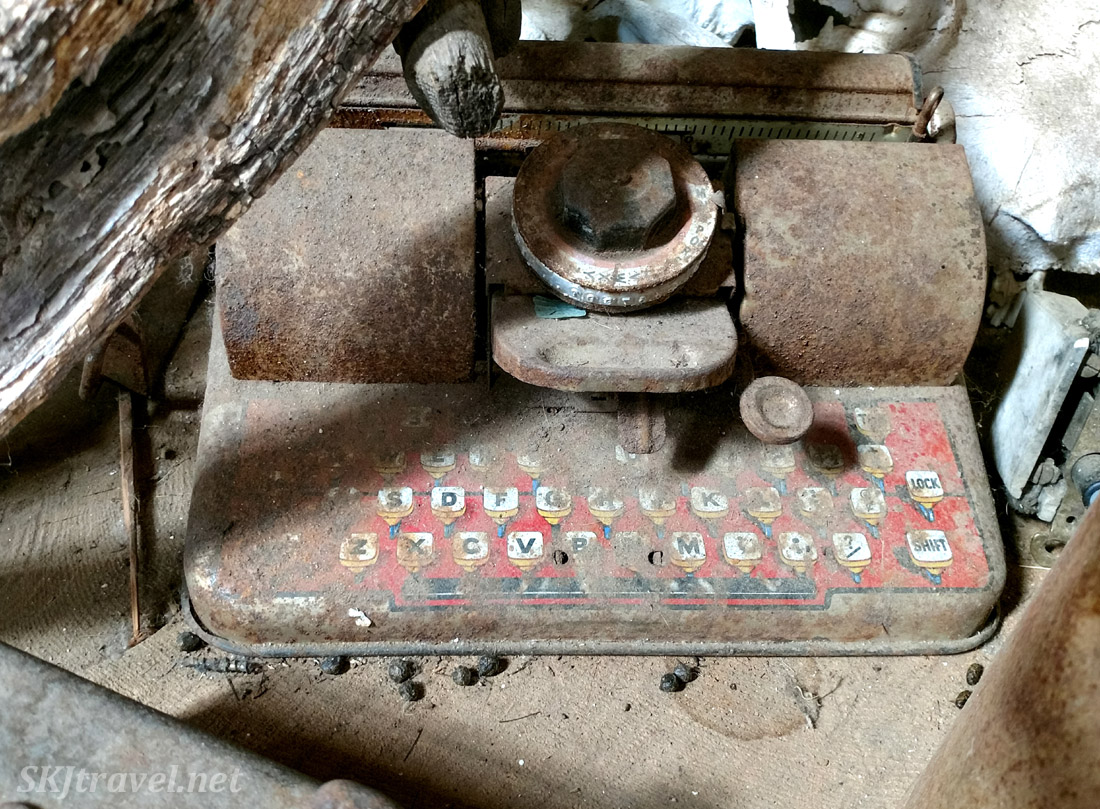 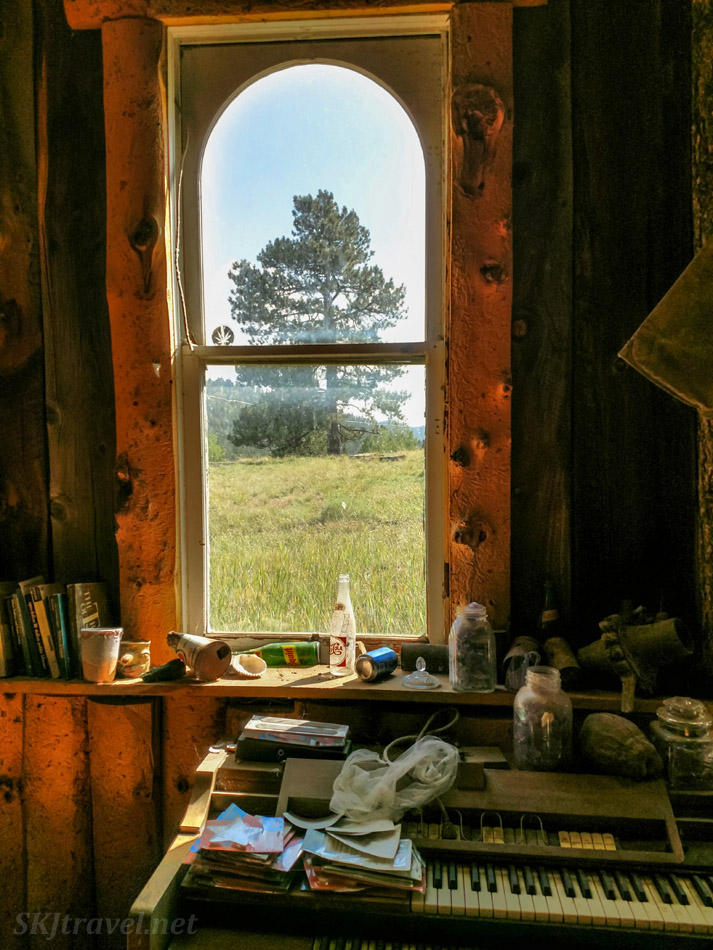 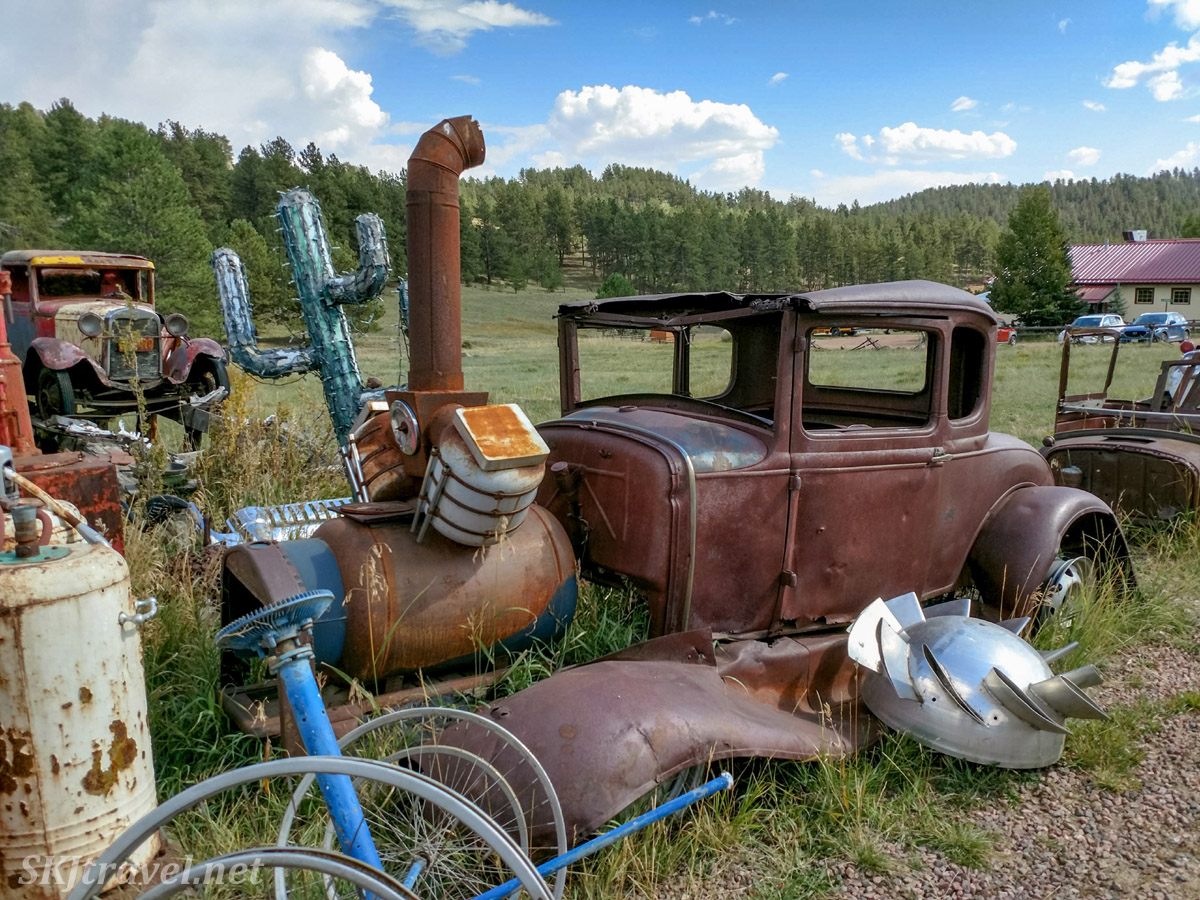 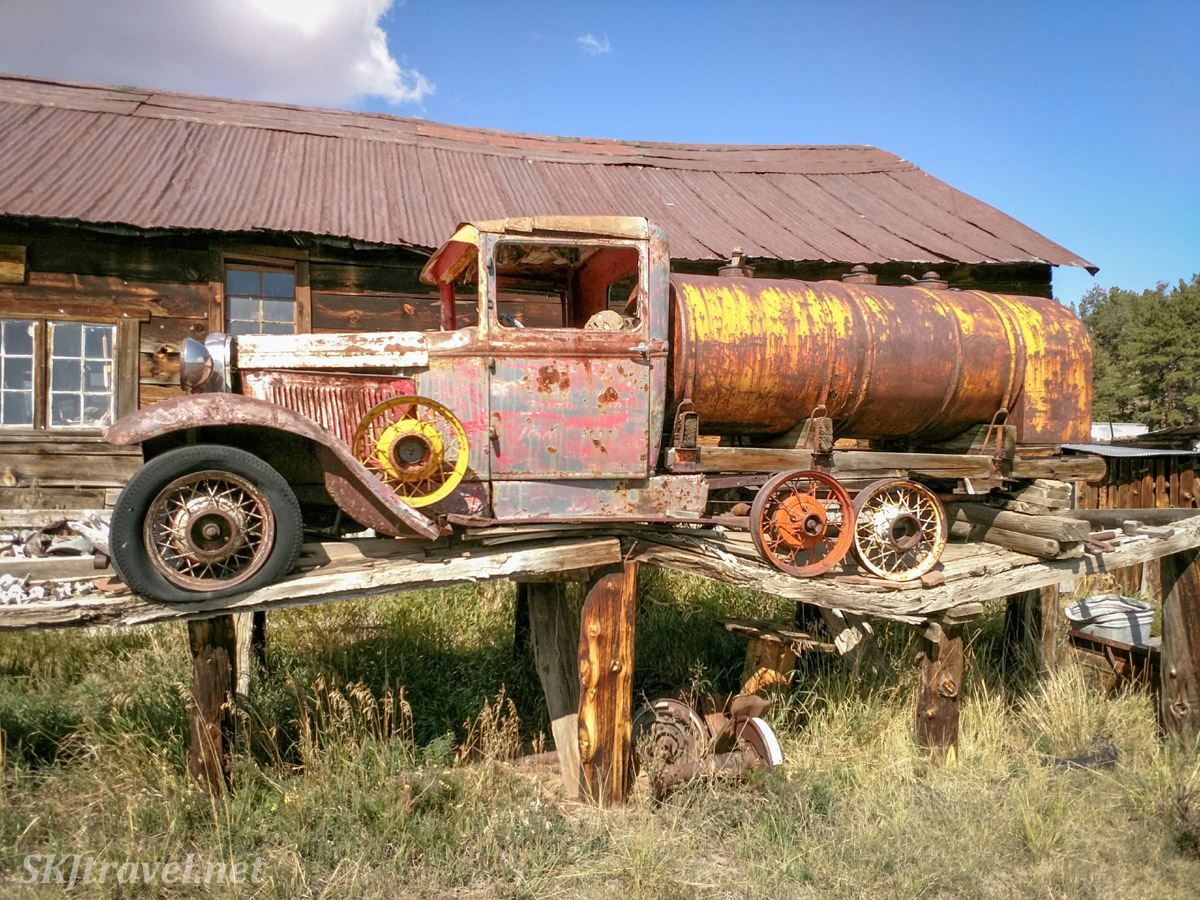 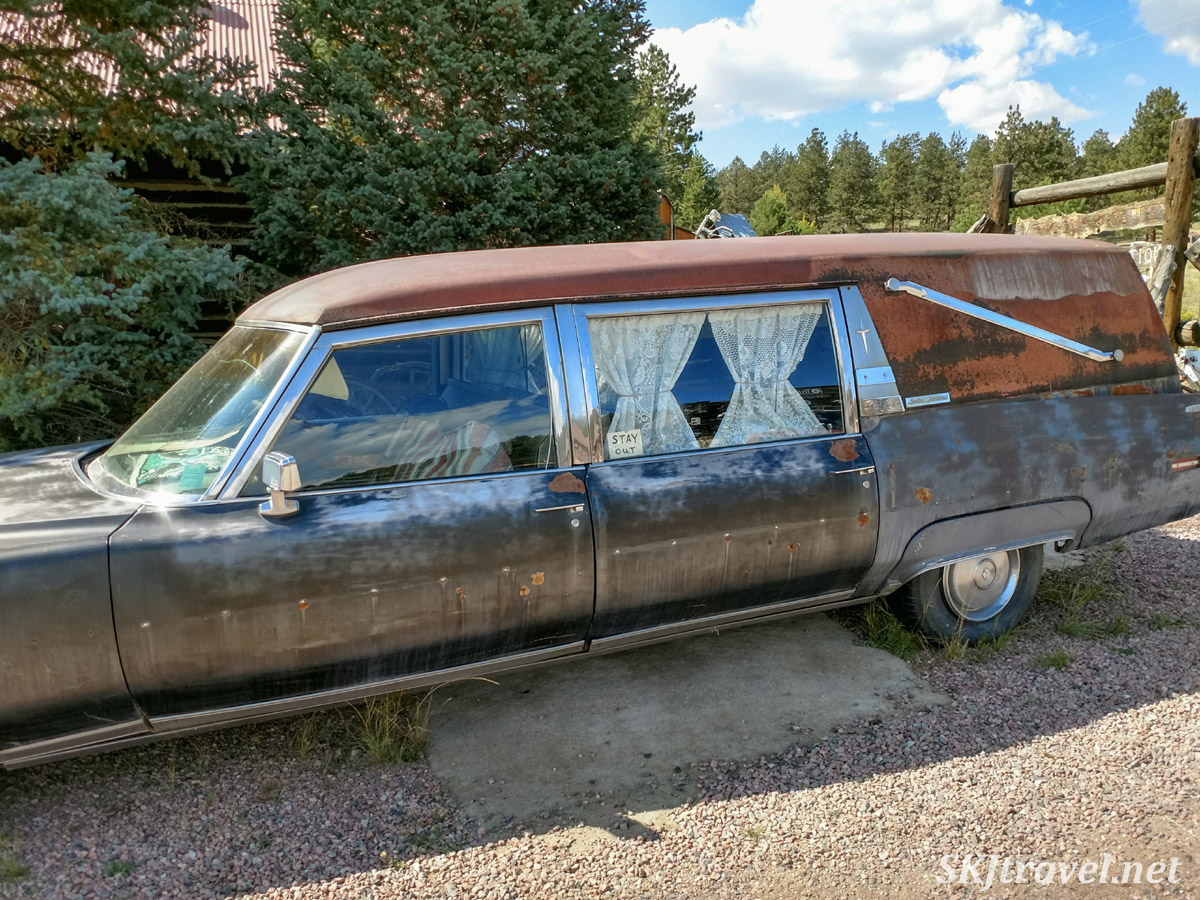 How about some critter remains? Snake skeletons -- don't think I'd ever seen one before, and check out the giant lizard foot at the top, it's like a dragon's foot! Maybe a lucky charm? 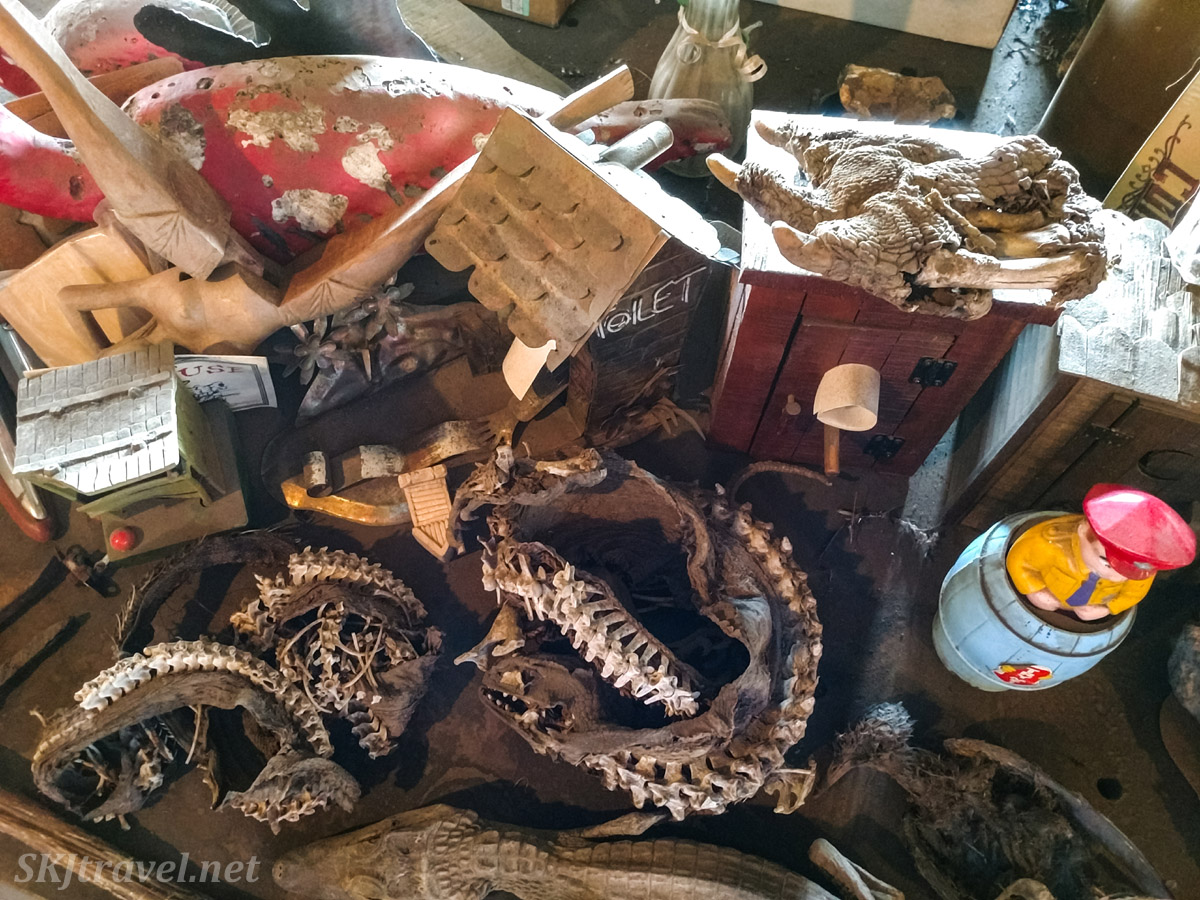 I took the pic below for the hilariously random composition of the display ... bird pelt, bucket, random tools, a certificate, and best of all the red underwear with a belt. Underwear? Swimsuit? Short shorts? I don't know, but imagine someone you know wearing them. 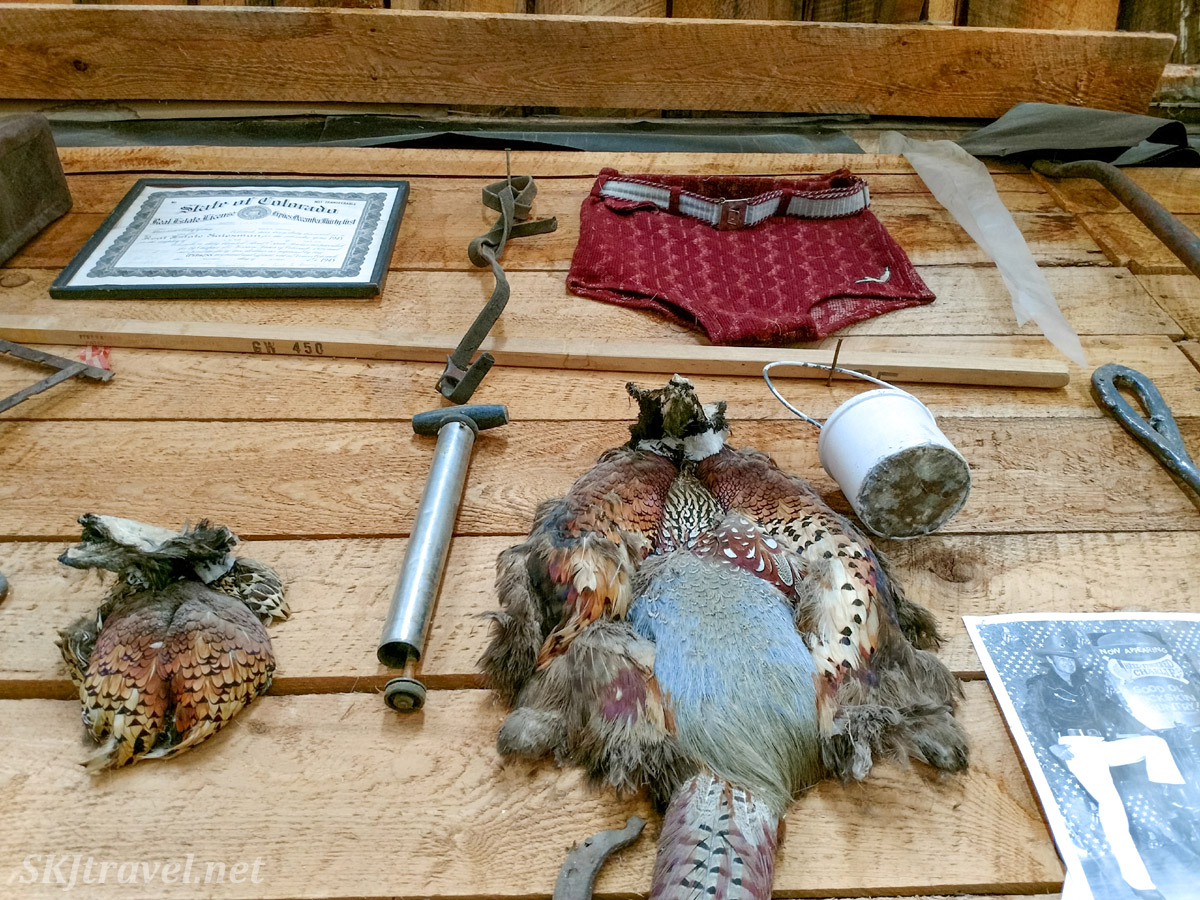 Skeleton animals outside ... like a year-round Halloween display. Pulling a jail wagon as they used back in the Old West to transport prisoners. 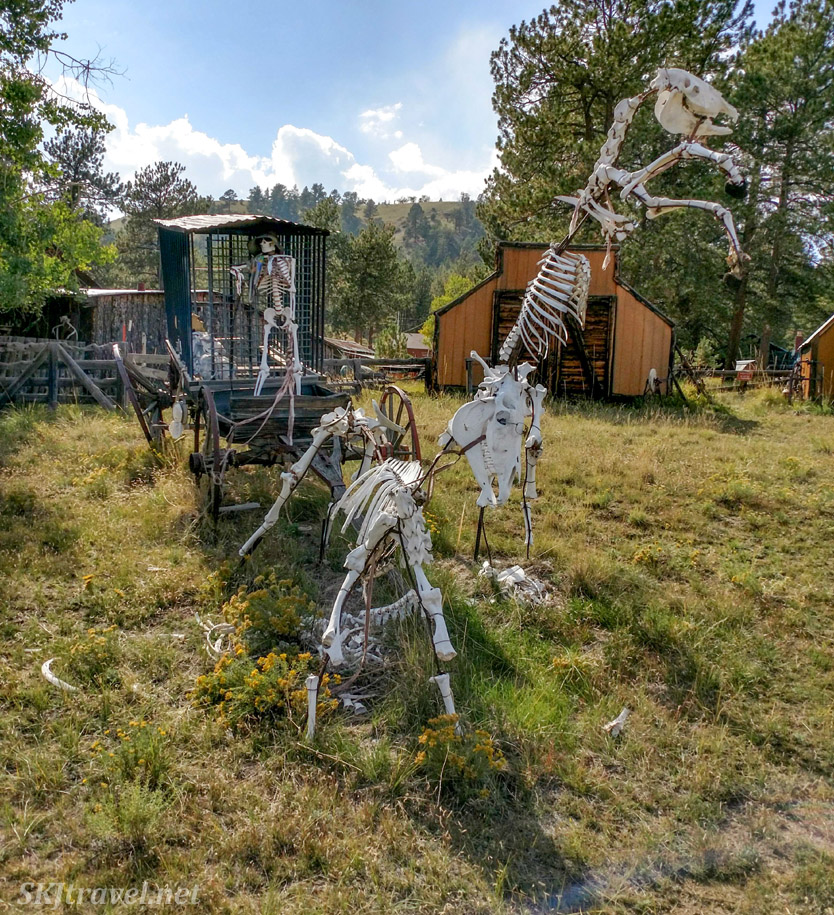 It looks like they successfully transported a prisoner into the jail! Should I come up with the bail money to get Erik out?? Oh wait, some careless watchman left the door open! 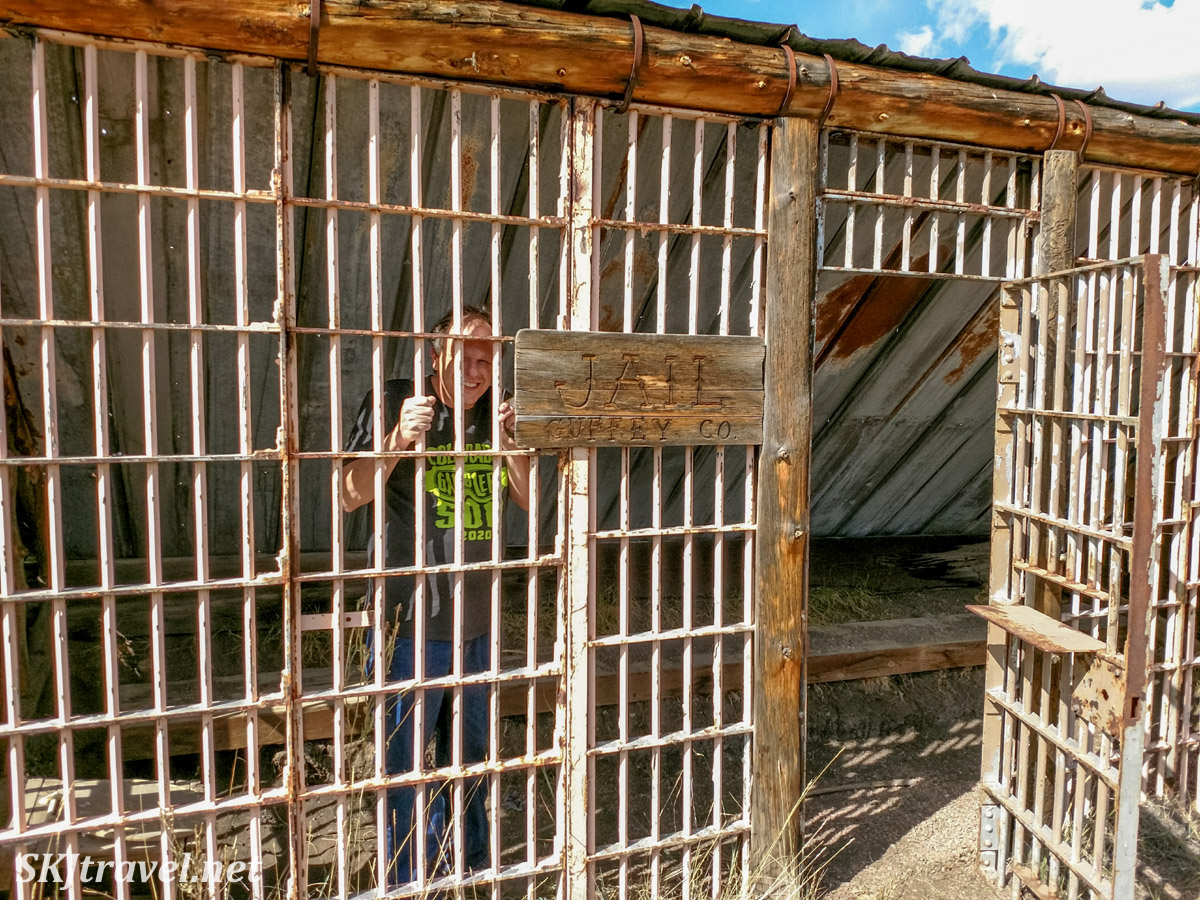 I guess they had carnival nights in Guffey. 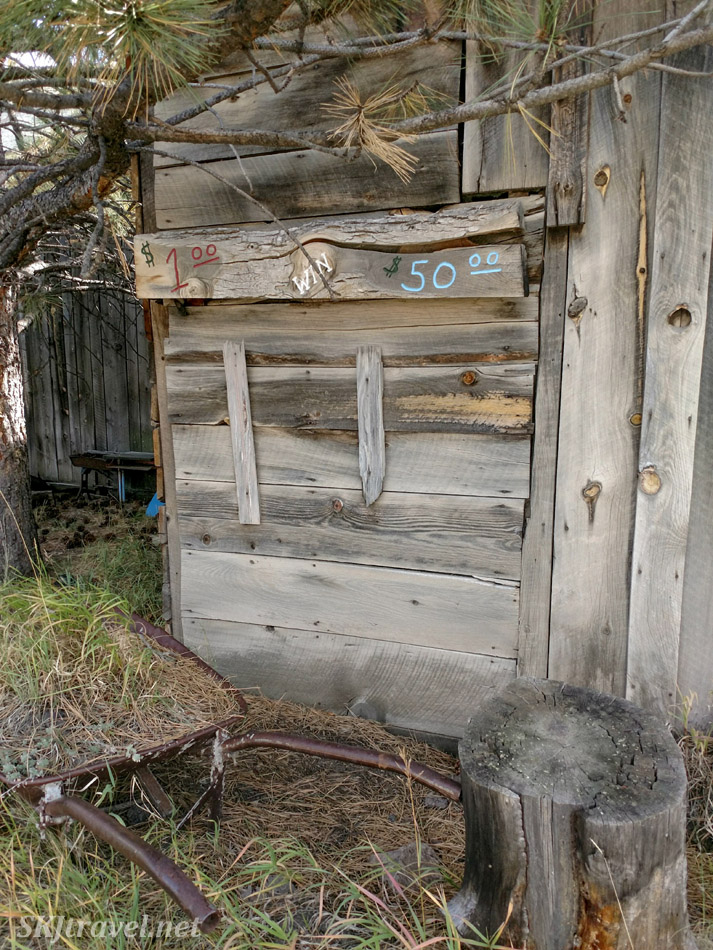 And it wouldn't be a proper display of Colorado antiques without old mattress springs. When Erik and I explore all the old mining cabins hidden in the woods in our area, if there is to be one thing left inside it's always rusted mattress springs. 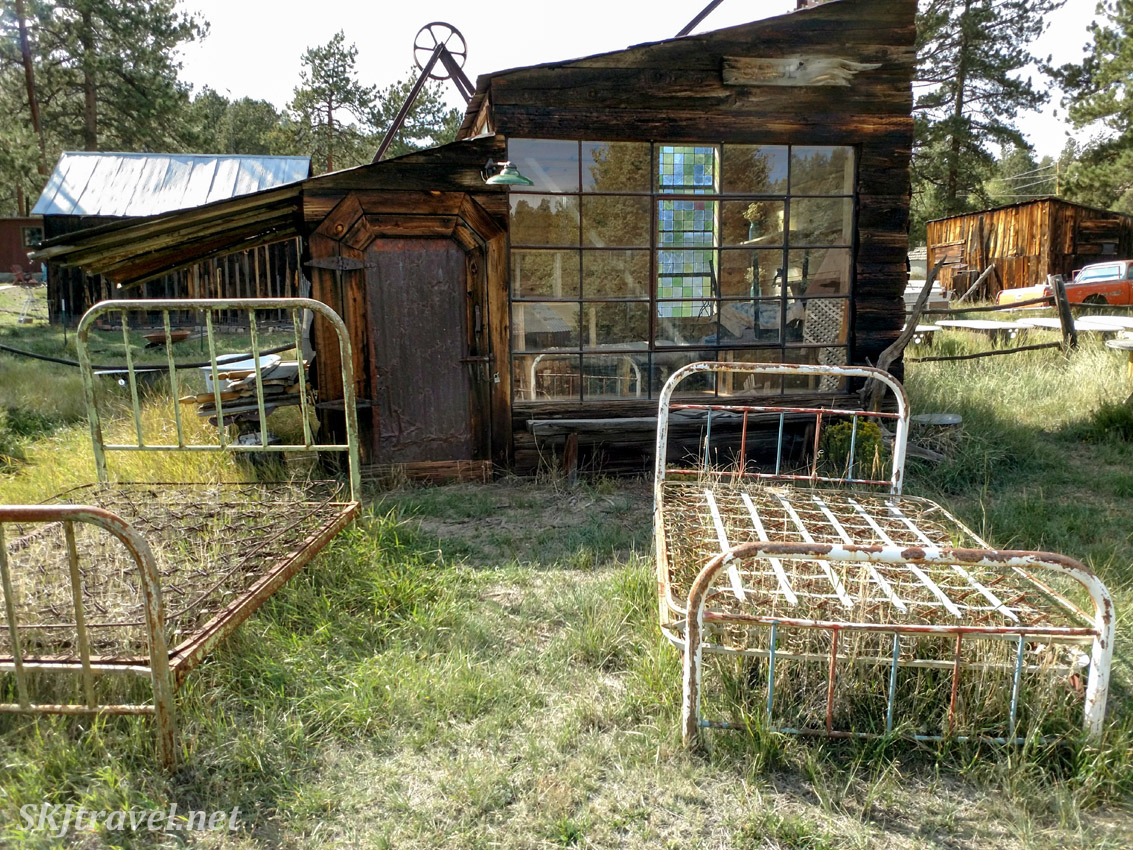