Kangungu had gotten wind of the suspicions mounting against him. He didn't remember walking into his nephew's dreams or those of his nephew's friends. He could only remember going to bed at night and waking up in the morning. If he was a dream walker, he was unaware of his abilities. But the accusations of his supernatural evildoing became so grave, he knew he must flee. He knew there was no recourse; he could produce no evidence to prove he was not a witch stalking people in their dreams. He knew he must simply run for his life, and he did. He left his valuable and beloved sewing machine — his happy livelihood — behind in his shop. He left alone, without his wife of decades. He ran.

Then he stopped one step short of deserting his home, deciding he needed just a few things, and he sneaked back to get them. I don't know what they were. I wish I would have asked his small and wrinkled wife if she knew. Had he already gathered them, or was he about to, when his nephew noticed him carefully padding through the shadow of his tiny cement-block shop? At this sudden, unavoidable confrontation, the nephew's blood ran hot and Kangungu's ran cold.

Reportedly, words were exchanged before his nephew grabbed a long wooden pestle from the family courtyard. I can only imagine Kangungu's eyes widening, for this was not a random choice of weapon. Only two weapons can kill a witch: a wooden pestle used to crush millet into flour or a short axe with a metal head.

It was a hot day and we sat in the broad shade of a mature mopani tree as Kangungu's brother, Johannes, told me and my friends this story. A little boy sat in the powdery dirt beside us, swatting a puppy with a metal bar. We scolded him to stop. The puppy didn't run away but hunkered down. The boy then petted it as though intrigued by the tenderness of this action.

I focused on Kangungu's sister, Josephine, placid in a purple headscarf and flower-print dress, staring at the ground as she listened to the recounting of her own son bludgeoning her brother to death. Her eyes looked as though they had been hollowed out and replaced with white stones; they no longer led to her soul. "When he killed my brother, he killed me, too."

"Kangungu was the one who took care of us, helped us with our problems." The siblings fell silent reflecting upon their failure to reciprocate. The little boy was now pulling hard on the puppy's tail.

"If we had only known," Johannes finally said, "that the young people were thinking all this, plotting against Kangungu, we would've taken him to a witch doctor, who could have proved his innocence or dispelled any evil spirits." His nephew had swaggered into the police station after the murder to brag he had just saved the community from a witch.

As we gathered to leave, empty-eyed Josephine asked me for money to buy minutes for her cell phone. Kangungu's eldest brother, Joseph, pulled my friends close to him to make a more furtive request for a much larger sum of money. "I need to see a witchdoctor."

His eyes darted from the river beside him and his four penned cows to his fenced-in courtyard, to his cousin hoeing a nearby mahango field. He's pretty sure he doesn't turn into an animal at night, that he hasn't stolen any souls or caused crops to fail or people to get sick. But since his hair is turning white, he's under increasing suspicion. "Only the witchdoctor can divine and tell the community that I haven't stolen anyone's life-force to grow old."

We walked to see the murdered tailor's shop. No one had boarded it up. I peered in the dirty window, crisscrossed with rusted metal bars, at the lonely sewing machine. It was March 2016, only months after Kangungu was killed in Kake village, in Namibia's northern borderland between skeletal sands and elephant savannas, where everyone points an accusatory finger outward in the day and sweats with fear at night that they'll be the next one convicted of witchcraft. For every family has a witch, they say, to whom all types of misfortunes are attributed.

Such as Granny Sabina, whose granddaughter was biding her time. The witchdoctor had already told her Granny was supernaturally responsible for the recent deaths of her parents. The granddaughter sat sullenly against the courtyard wall, counting her pennies in her head; she was already saving up to have her tiny, frail grandmother killed. Granny laughed with abandon when we greeted and hugged her, straining the wrinkles around her eyes. The insides of her two front teeth were rotting. ”We must protect my grandmother,” her grandson said, holding his young boy on his lap.

The following year we visited Granny Sabina again. “Where is your grandson?”

Another granddaughter answered for her: “He went to Windhoek to find work.” We sat with Granny in the shade of a tree and talked of the old days, when she was young. She drew us pictures with her finger in the dirt. The rotten spots in her teeth had fallen out.

Then my friend began getting calls from her grandson over several months: “Send me money, I can’t find work.”

“I still can’t find work. I need money,” he texted.

And then it dawned on him – it wasn’t just poor luck, he wasn’t unqualified for a job. His sister had been right all along.

He came back home for precisely two weeks. Granny fell mysteriously ill. When he left home again, he left behind his dead grandmother. There is one other weapon that will kill a witch: poison.

I thought of the many derelict and boarded-up huts we'd passed on the roads throughout Namibia. People moved, I had figured, or went broke or would be back in a few months after seasonal work elsewhere — explanations I could imagine for neglect in America, my own country. I pressed my fingers against the tailor shop window, Kangungu's abandoned soul on the other side: a black model with "Singer" painted in gold, the colors dulled with dust. What lay behind it in the shuttered darkness? A chair? A box of bobbins? A ledger? A satchel of other people's dreams?

I couldn't see through the glass so far inside, I could not reach into that deep. I could see only the whites of my eyes reflecting back to me. Steady, silent, unsettled.

Read more about witchcraft in Namibia 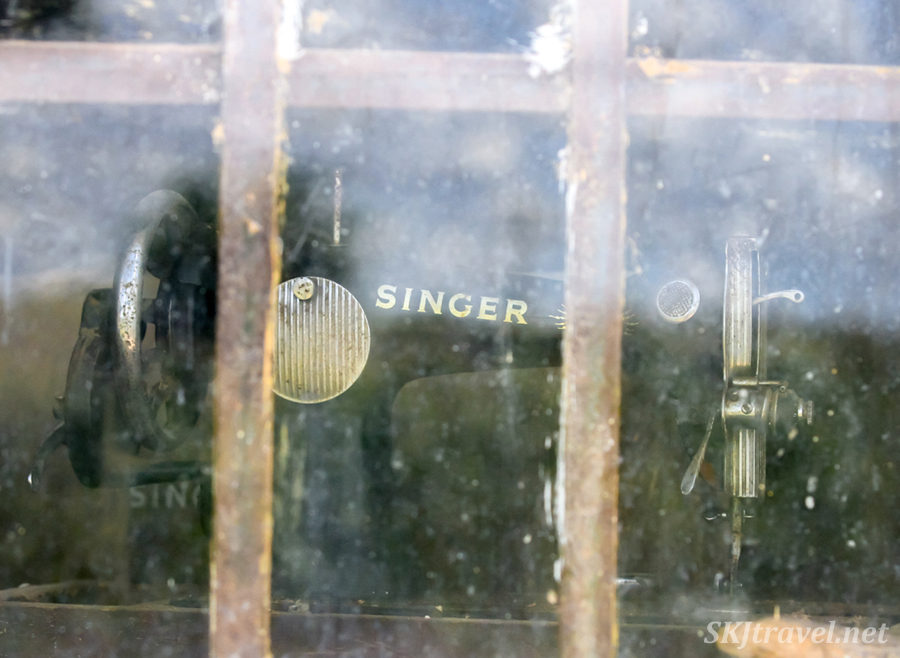 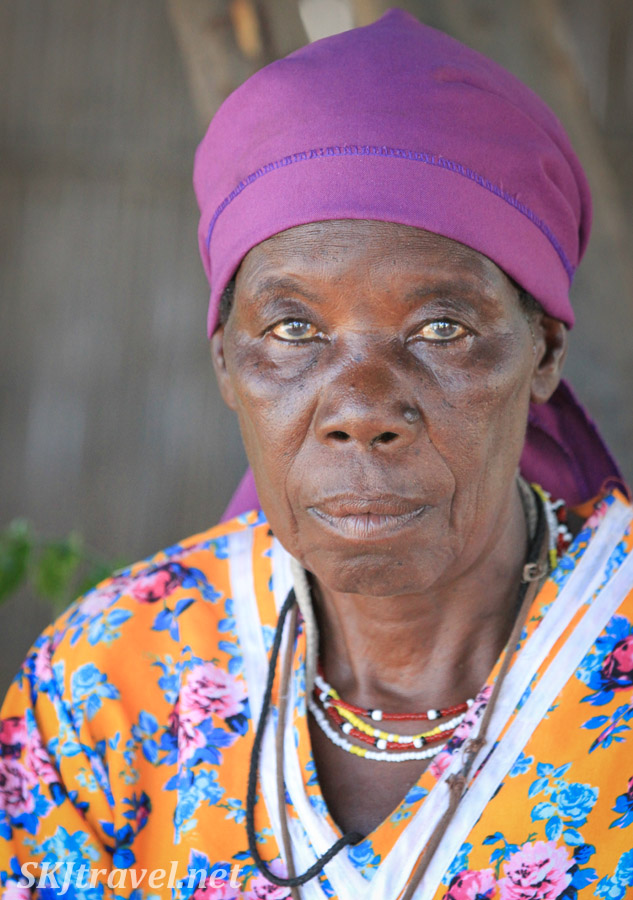 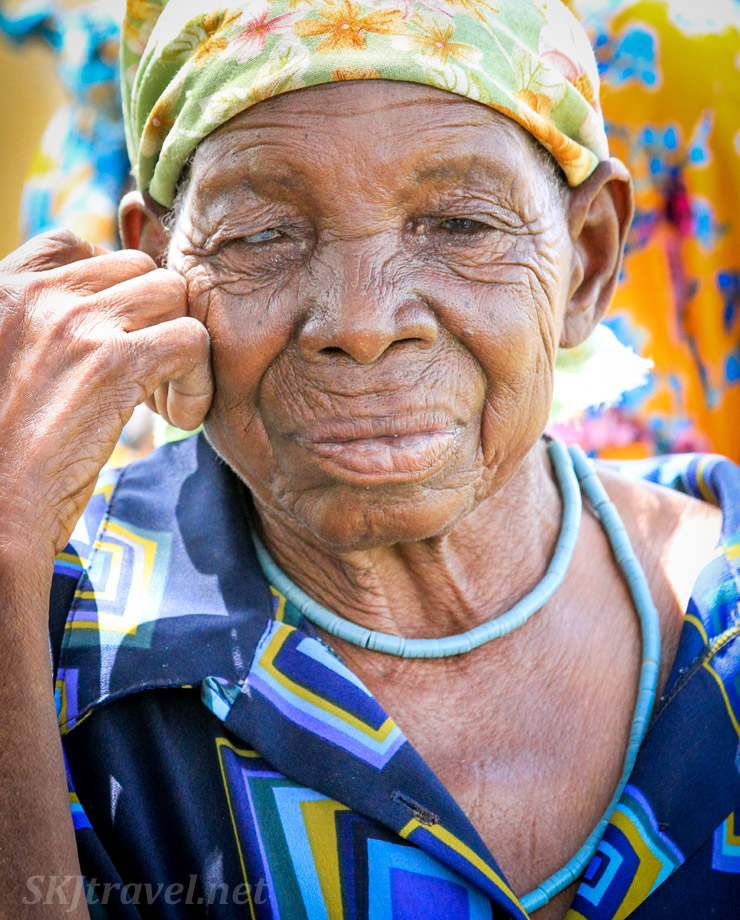