She materialized at the fence just as we were closing down the women's clothing "store" in Souda refugee camp, in which each woman refugee was allowed to select three items for herself from the boxes of donated used clothing (not to be stingy but to ensure enough for everybody). The organization I was volunteering with used the same tables for the store as to serve lunch from, so we had to return the clothing crates to the warehouse before preparing lunch.

She was tiny, almost child-sized. She wore jet-black pants underneath a long, dark-blue form-fitted coat that came down to her calves, with brilliant gold buttons and gold trim on the cuffs and seams, up to a high collar. It was a style I'd seen commonly when I was a tourist in Iran. Her head was tightly wrapped in a simple white hijab, which looked striking against the high blue collar. Dainty cloth shoes cradled her dainty feet. I imagined them wading through the laps of the cold Aegean sea, precariously picking their way through the rocks and scuttling crabs in a receding tide where the small boat had beached, until they reached the dryness of this foreign land.

She had arrived on Chios Island a couple days earlier, crowded into a Turkish smuggler's motorboat with other Middle Eastern refugees who paid a grossly exploitative sum to be ferried across the narrow straight to Greece. I accompanied the tiny woman into the "store" at the last minute; we left out the crates with size "small" in them for her, and while she perused the clothes that once belonged to someone else, the other camp volunteers were already re-positioning the mobile fencing around the metal picnic tables to start arranging and preparing for lunch distribution. As the fencing swirled around her, boxing her in like a prison cell, the woman rifled through the pants and shirts, picking one or two out and holding them up, then putting them back. I studied her from behind my mirrored sunglasses as a range of expressions passed over her delicate features -- thin lips and narrow cheek bones, a short, rigid nose and small, furtive eyes. The adjectives sound angular and harsh, but framed by her close-fitting hijab, they created a portrait as compelling and pristine as a doll's.

Her face told me that when she heard from other women in camp there were clothes available, that she could go pick something out, she envisioned a selection as stylish as the clothes she wore. Sifting through them, the reality began to set in on her that these weren't new clothes, they were cast-offs. She dug almost frantically to the bottom of the crates. Her movements were not frantic, no. It was only because I was focusing on her face that I could see her composed movements straining against a rising panic like a horse ready to break out of its gate. In her homeland -- and I did not know where that was, I didn't speak any Middle Eastern dialects to be able to ask -- if she was presented this crate at a bazaar, she'd surely toss the contents to the ground. She looked desperate ... Is this really all there is to choose from?

Finally she selected only one item -- a shirt, the cutest one, which is the one I would have chosen for myself. It must take awhile, I realized, for a woman to let go of her pride in her appearance and individual sense of fashion, to be able to pick out clothes that simply fit reasonably enough to supply a rotation so that clothes can be washed from time to time. Washed in a plastic tub of cold water and laid across the top of a tent to dry, or fastened to a community clothes line in the salty wind, or threaded through holes in the high chain-link fence surrounding the military-run refugee camp up the road. Most women coming from Syria and Iraq had no more than one bag of possessions with them, if anything at all.

In a few days, the tiny woman would begin standing in line each month to collect packets of sanitary pads from volunteer workers like me, who hand them out from a box in the back of a car, only one packet per woman, again not to be stingy but to ensure enough for everyone. She will then be required to give her name to an Arabic-speaking man to record. Some women took the personal packet into their hand stone-faced and without comment, some begged me to slip it discreetly into their purse. After discarding their fashion sense, it must take even longer for the dignity and intense privacy of the Islamic women to erode to where it no longer embarrasses them to record the needs of their menstruation to a foreign man. Or perhaps it never does ... I didn't know if the stoicism overcame the embarrassment or simply masked it.

Before I left home, I collected pretty beads and jewelry-making kits, notepads and pens; I was told such diversions would be appreciated. I envisioned sitting around amicably with the refugees, maybe even smiling peacefully at one another, as we passed the time in a bubble of quiet solidarity. One young man, with the paper and pens I brought, sketched in great detail a woman with thorns wrapped all around her body like barbed wire, with the caption: "ISIS is evil." The beads were put in a crate with donated glitter and sequins and sewing materials, to be distributed by someone else at a later date. I came prepared to hand out pretty craft supplies, not sanitary pads, prepared to provide creative distractions, not foreseeing they would be used to express such brutality.

On an academic level, from the documentaries and journalism I'd watched and read, I knew the desperate circumstances, the devastation many of the refugees suffered. I traveled to Greece to be a temporary volunteer at the refugee camp in order to be touched by that sadness, to increase my proximity to tragedy, as my own life has sheltered me from it. I wanted to touch the broken and abandoned so they could live in my muscle memory even if no one else remembers them. I wanted to give the homeless a home in my eyes, in my witness. I was prepared to see sadness; I hadn't anticipated stoicism.

That would come later for the tiny woman, whose name I would never know, but I could see that day in the clothing store the first light of the enormity of her change of situation dawning on her as she walked away from the crate clutching the one shirt. By now the fencing had been put together to close off the tables completely in anticipation of the food trucks arriving. I had to open a slot for her to step through the fencing. She didn't look demoralized (that, too, would come later), she simply looked stunned. This brief and minor act of creating a small space for her to pass through was strangely one of the hardest things I’ve had to do.

She nodded politely at me in a "thank you," but her eyes weren't focused on me. They were looking ahead as if she was mentally preparing herself to cross a bed of hot coals in her bare feet. She walked back toward the tents, the epitome of aloneness, confusion, vulnerability, abrupt change. I felt like I had let a young gazelle from the security of the clothing-store pen into a field of lions.

I turned back to close the gap in the fencing and waited for the tins of hot food -- perhaps spaghetti or chicken that day -- the naan and fruit and plastic silverware to be unloaded. Refugees were already forming lines to wait to step forward and collect their one portion. When I looked up again, the woman had disappeared in her beautiful blue coat.

In the days to come, I worked the food lines and put my hand on her slight shoulder as she reached the front, to signal her, and each woman, when to step forward by moving my hand from their shoulder in restraint to their back in a gentle nudge. It must have felt degrading to the women, but without this order, the food tables would become mobbed. I tried to project friendliness when I touched them, but it was difficult to meet their eyes. I soon learned that to be effective in my role, I needed to act with compassion but observe with dispassion. It was a more profound and confusing experience to watch hundreds of decimated lives swirling around me than my pre-trip imagination had conjured. I touched the tiny woman so lightly, as if she was made of fine and fragile porcelain, afraid she might crack under the weight of dismay ... of being treated like a child whose size she resembled.

At the end of each evening, as we packed up the distribution and activity tent and left the refugees to fend for themselves through the dark hours, in their UN-issue tents or the wooden train-car-like boxes built for them, I tried to imagine that on the way back to my hotel I saw it bombed and flattened to rubble, that I got a phone call then from my house-sitter back home that my town had been razed by rebels, all my possessions lost, my cats unaccounted for, my house sitter barely crawling out alive. I had nothing to go home to, no place here on the island, no money to rent another room, for it would have been lost in the bombed hotel. What if tomorrow I was standing in line with someone else's hand on my back?

No, I realized, the tiny woman was not fragile. She was the solid doll at the heart of a set of matryoshka nesting dolls, the smallest one but the one who can't be split open. It was me, my hollow hand on her shoulder, who was like the largest doll, the one who hasn't been tested, who hasn't been split apart to see who is underneath, to see how many layers of dignity I can shed.

She didn't know it, but it was she who gave me the fortitude with her terrified grace to stand against the low morale of the refugee women and usher them silently to their food, their clothes, their feminine products.  The women won't remember me in a sea of continually rotating volunteers, but I remain haunted by the golden hems of a beautiful blue coat, gliding silently away from the ghost of my naiveté. 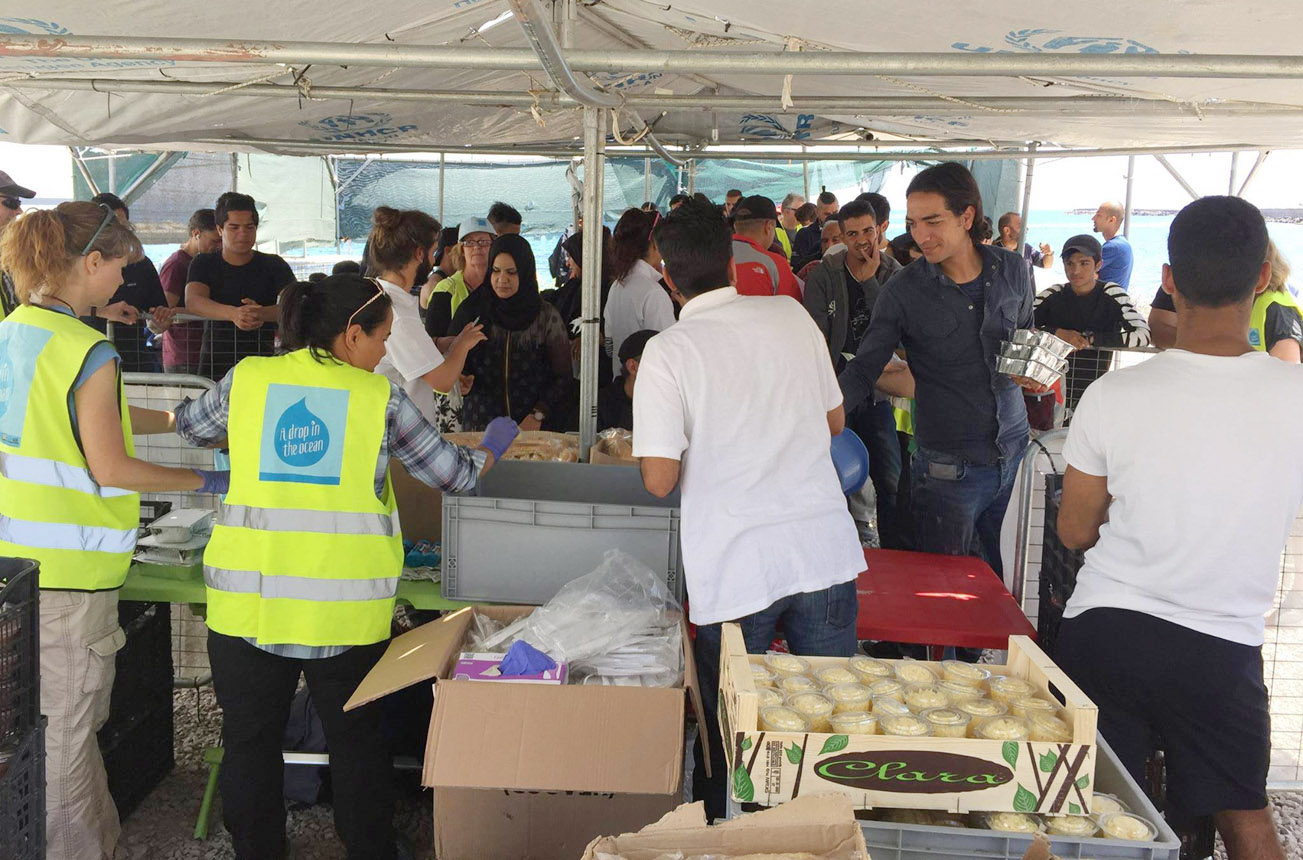 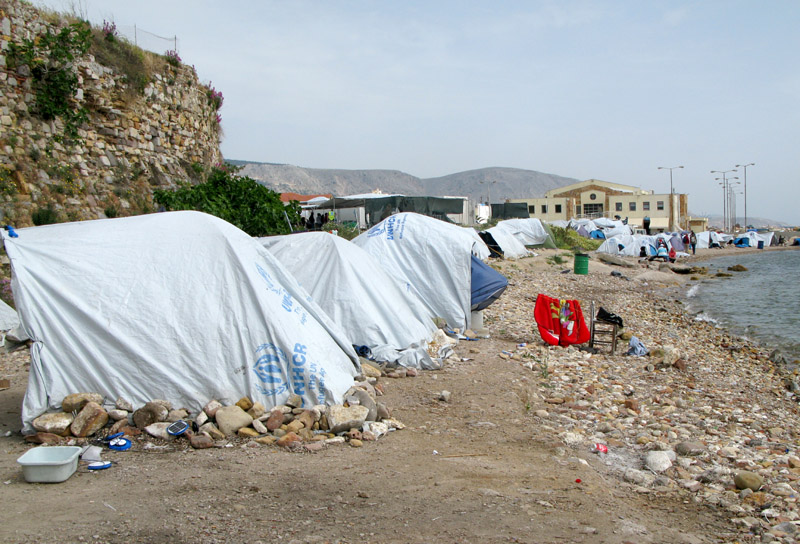