I’ve seen them on television shows … the tornado-like funnels of bazillions of insects moving across Lake Victoria in plumes. Now I’ve witnessed them in person. Looking out over the lake during breakfast, I could see them. And by afternoon, I myself was engulfed in them. The sound is very loud as you approach a swarm. I was walking beneath a tree once and a large packet of insects just dropped out of the tree at my feet. I looked up to realize that the tree was completely taken over with these packets that engulf the leaves. Isaac told me not to swat at them or to swish them away with my hand, as this makes it worse. I noticed then, that nobody anywhere was trying to wave them away with their hand. “Just bend your head down and walk through.” They still get in your eyes and nose and mouth. Walking back from lunch with Bruce, he said, “You have to talk with your lips closed …” The one saving grace is that these buggers do not bite. They’re little gnat things that simply invade your orifices. Not particularly pleasant. 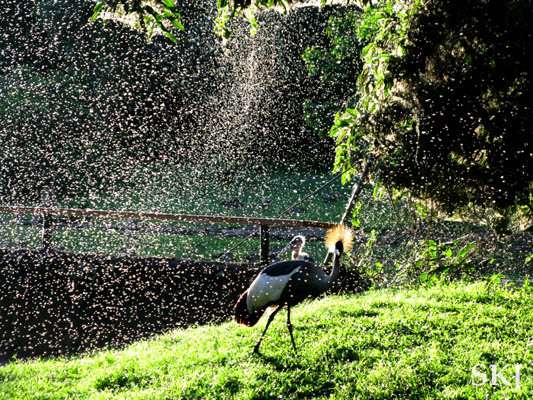 The vervets were really getting nasty today. Maybe the gnats get on their nerves as well. One tried to steal my breakfast again (I saved it), but he went to the next table and absconded with the sugar bowl. Eventually he broke it. For an outfit like this restaurant, that’s a fairly major blow, losing an item like that. I’m somewhat confident it was the only sugar bowl they had. Late in the day I came across the troupe and followed them about taking a few photos and one of them became very aggressive and attacked me! Good thing I had on pants rather than shorts. It was actually a bit scary.

It was apparently grooming hour … I came across numerous pairs or triplets grooming each other, and noticed that the groom-ee falls into a trance while being groomed. One monkey was lying down on his side in the road while another groomed his fur. After the groomer left, the monkey still didn’t move a muscle. I honestly thought it was dead. I walked up to it, and it was motionless. I was about to nudge it with my toe to make sure it was dead and suddenly it sprung up, scared the hooha out of me. Then I looked around and noticed the other monkeys being groomed looking like they’d checked out for awhile on heroin or something.

Today's conversation at the chimp house among the zookeepers centered around governments and corruption. Often we have downtime between when morning chores are finished and lunch. "Is there corruption in America?" they ask.

"There is??" they are slightly incredulous. If only their perception of America was real and we all had maids and consciences to bar corruption! OK, elephant and baby chimps coming soon, as promised on Facebook.