The other American volunteer here, Steph, and I hired Isaac to take us on a weekend safari from the UWEC to Murchison Falls. I'm sharing with you here some scenes from the road to the national park. Taken out the window of a moving vehicle, so you know, nothing spectacular. But they give you an idea of the scenery outside the city. I love the bandas (the thatched mud huts) and the cows with the spectacular horns, women in vibrant colors walking the roadsides with loads balanced on their heads (you know how jealous I am ...), children running. I just fall into a trance when traveling through this type of country.

We had to drive through Kampala to begin the journey, which was, as had been advertised to me, something else. I had been told that traffic at rush hour could delay you by up to 2 hours. Driving out of Entebbe toward Kampala I was finding this hard to believe, as there just were not that many cars on the road. However, it's indeed the case and here's why:  the major arteries of the city are mostly just 2 lane road. Well, one lane each way for cars, and one for the motorcycles, whose lane-splitting is even more hair-raising than in Athens, not because of the speed but because of the crammed conditions and vehicles doing all kinds of unpredictable and nonsensical things.

As it happened, Isaac, who drove us on our safari, used to be a cab driver in Kampala, so we took the excessively scenic route through the city. (I mean that as a euphemism for circuitous.) But this was very interesting, of course. Most of this area we covered was basically the land of lost dreams. People come to the city, sometimes selling their land or possessions to get to Kampala, expecting posh office jobs, or at least a paying job. But the unemployment rate is sky high and most of them end up jobless and destitute. I asked several of my friends here, including Isaac, why don't those people just move back to country when they can't make it in Kampala. I got the same answer from everyone:  the people who come and fail in their dreams cannot face going back home, can't bury pride, as their village will laugh at them and ridicule them for their failure. They would rather stay in the city in hunger and squalor than go back home.

Anyway ... while I am always drawn to depressing scenes and scenarios (lovely trait, I know), I certainly prefer the countryside where even if people are poor, the conditions are not the squalor of the side streets of Kampala. There seems to me a quiet dignity to rural life, even if impoverished, that cannot be replicated in a crowded city such as Kampala. So here are some random shots I snapped through the window while driving. 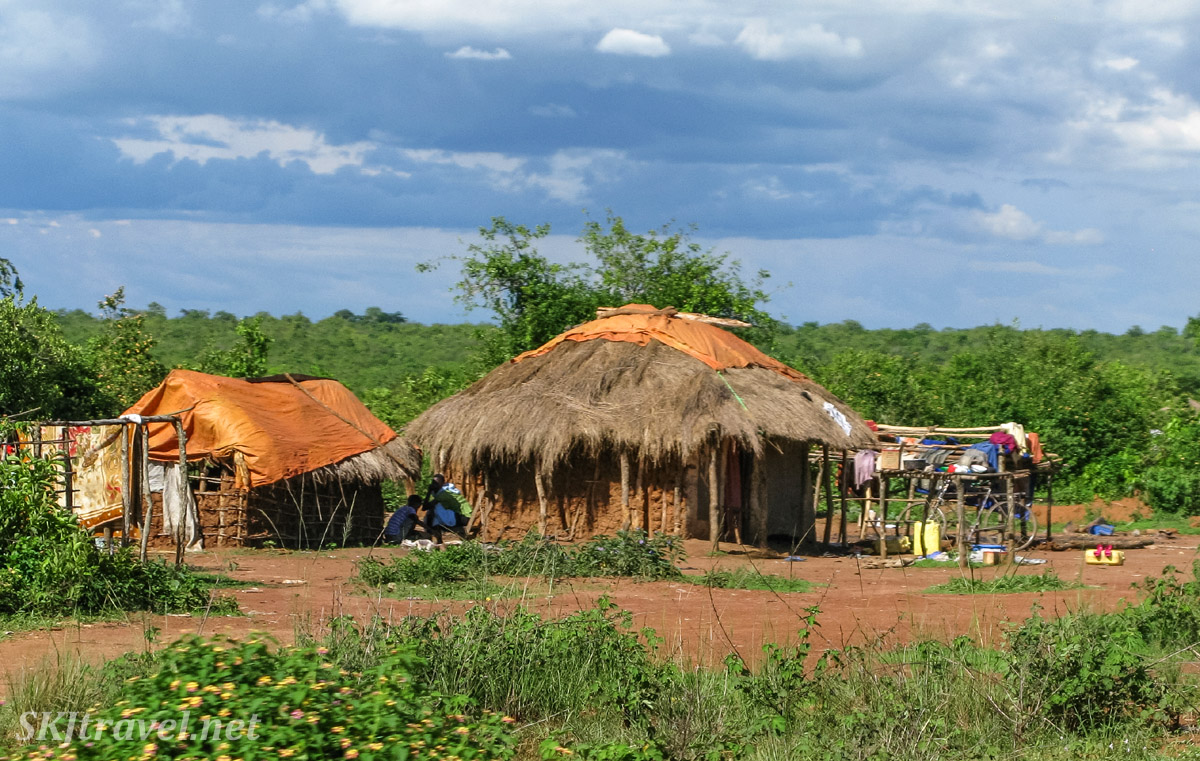 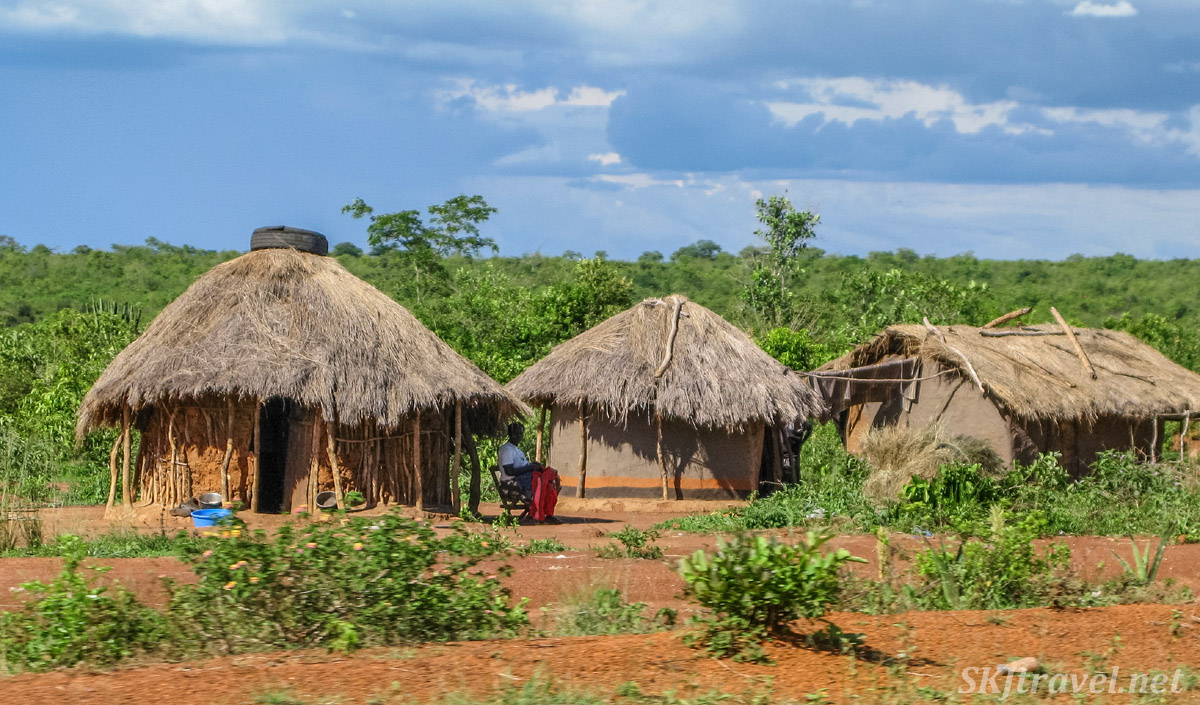 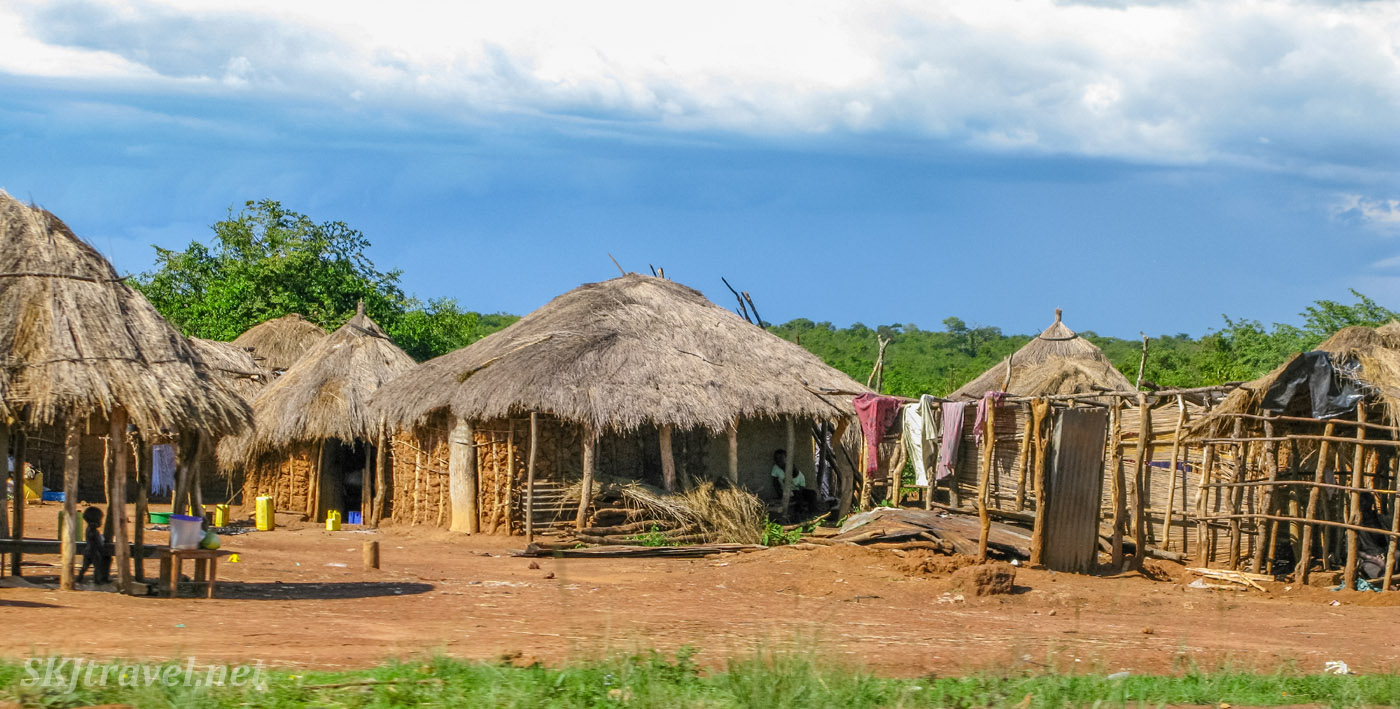 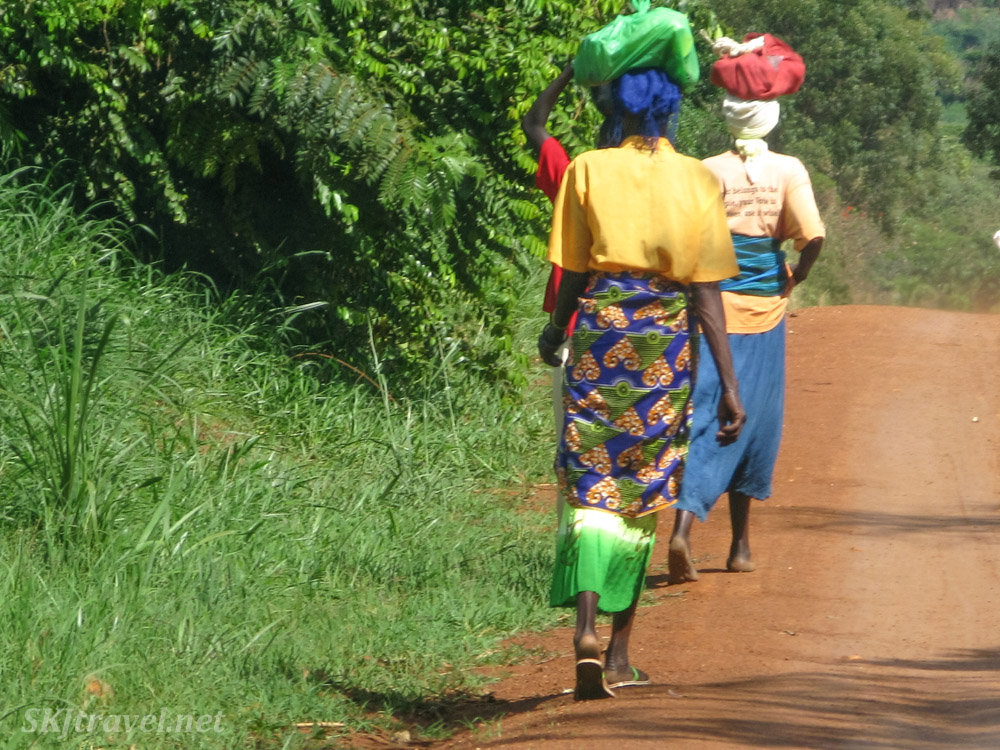 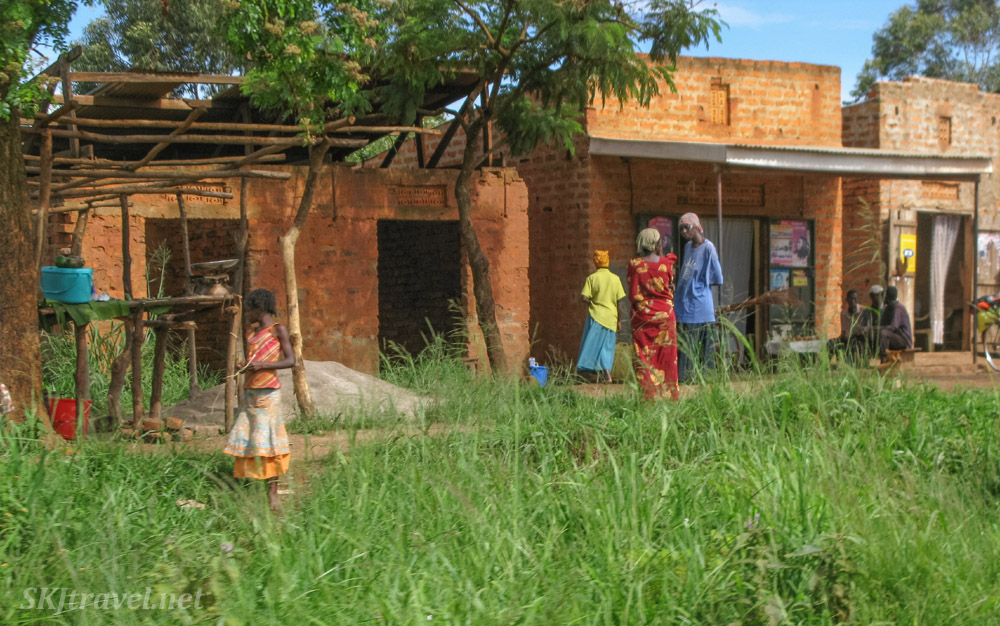 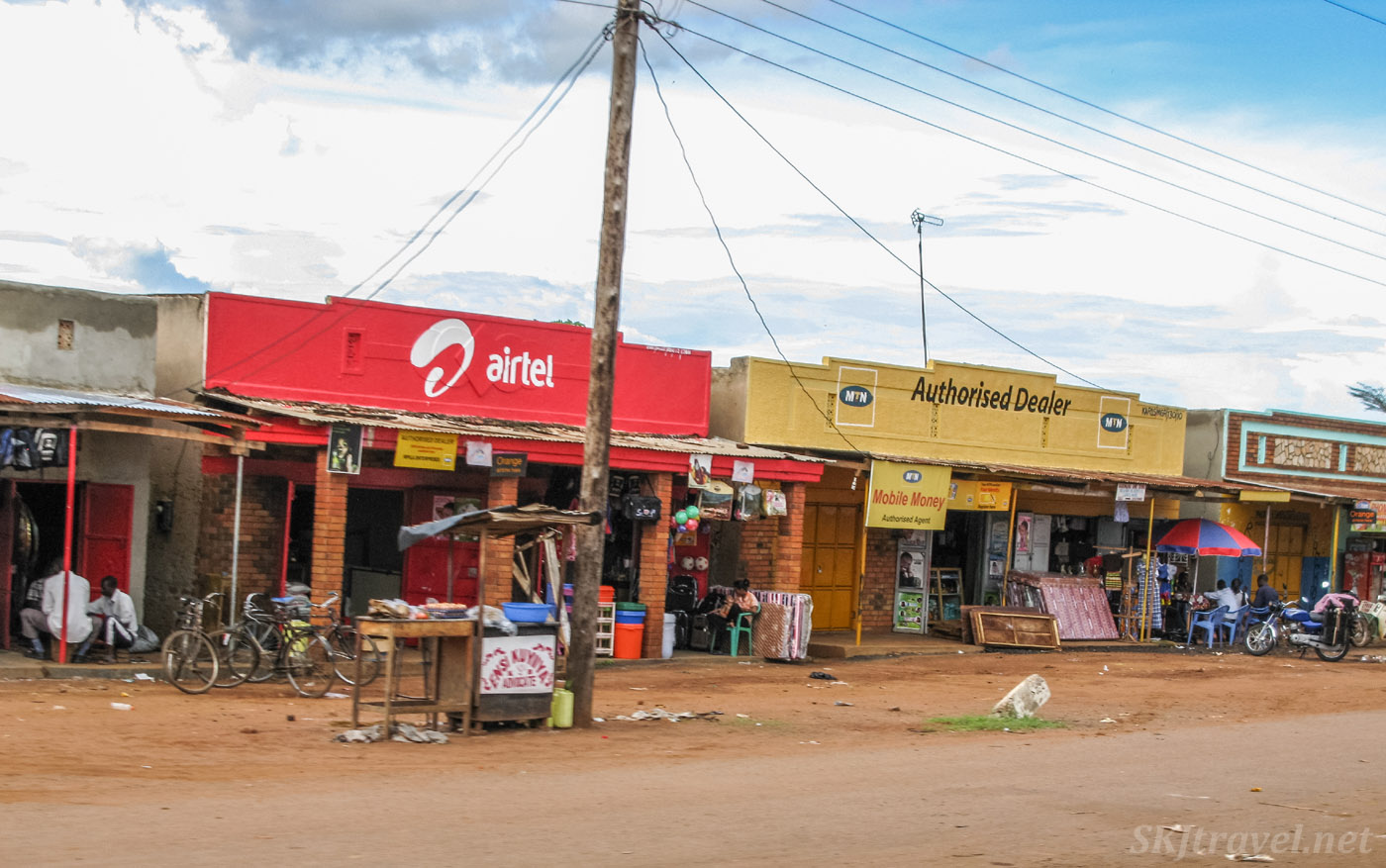 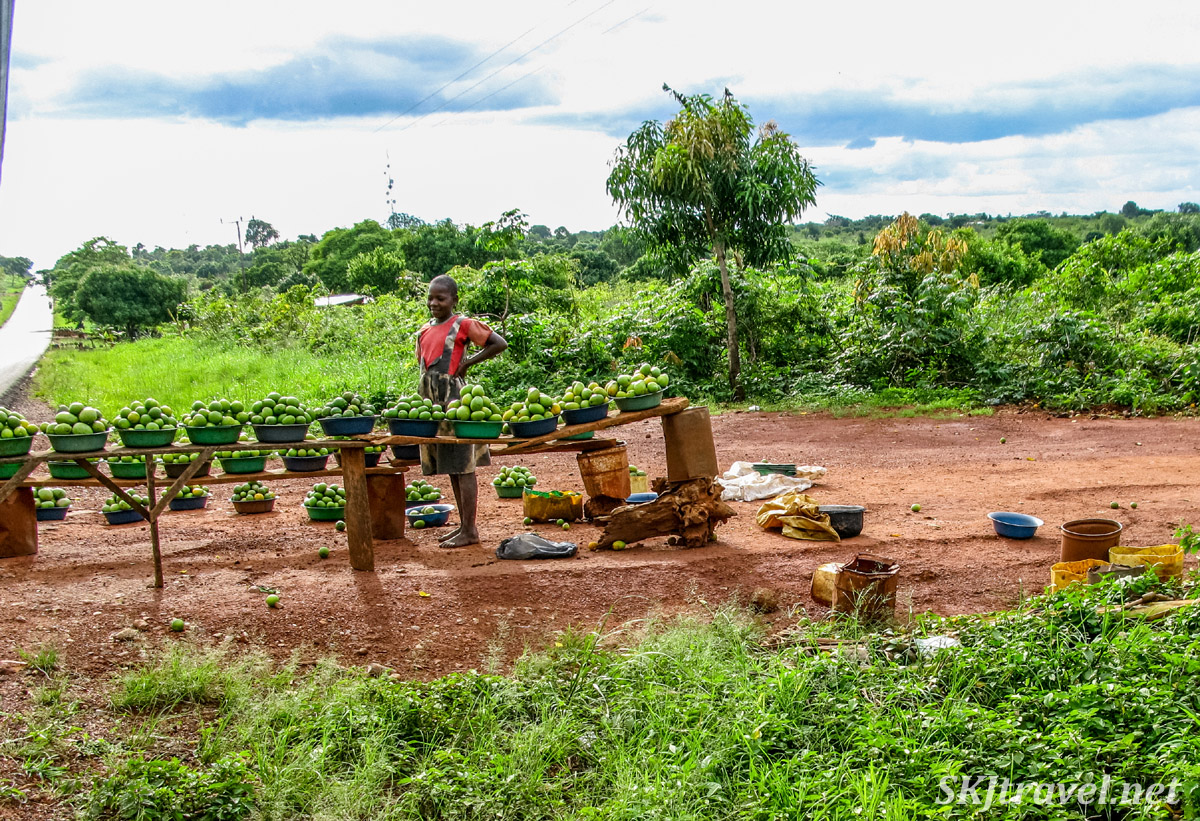 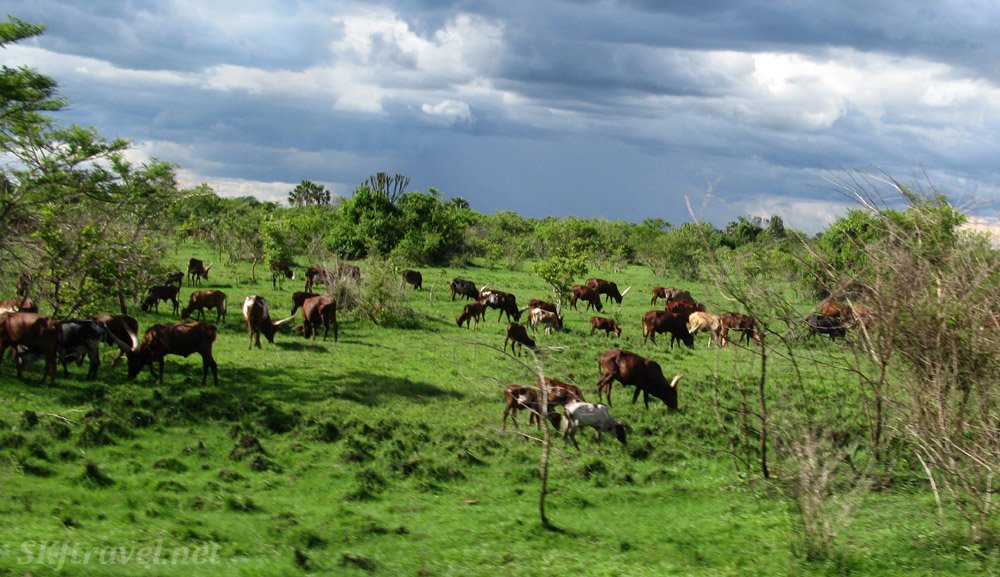 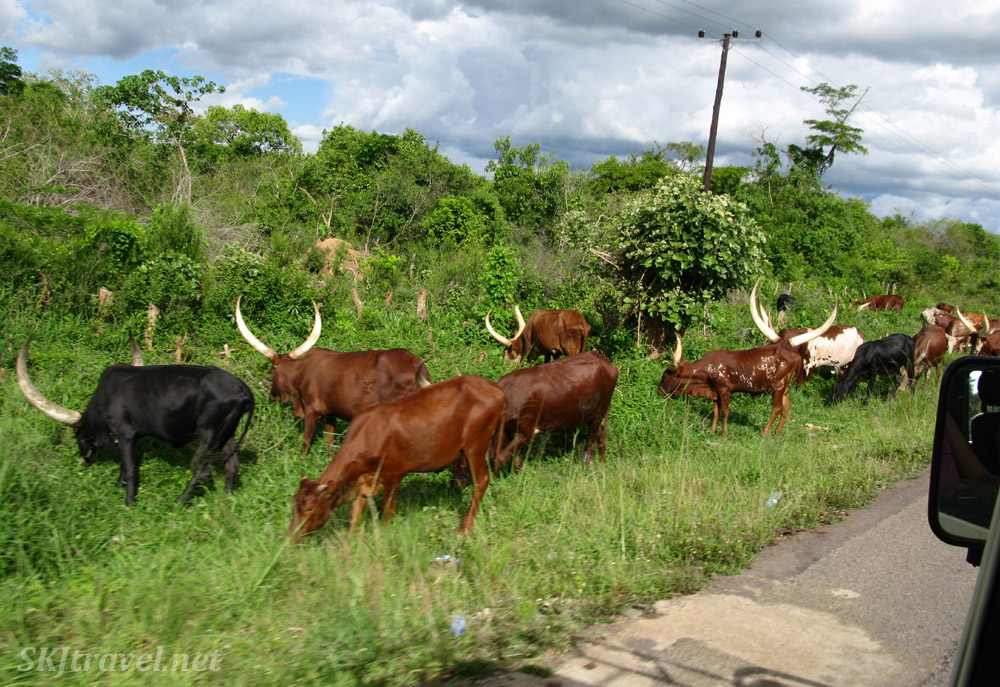 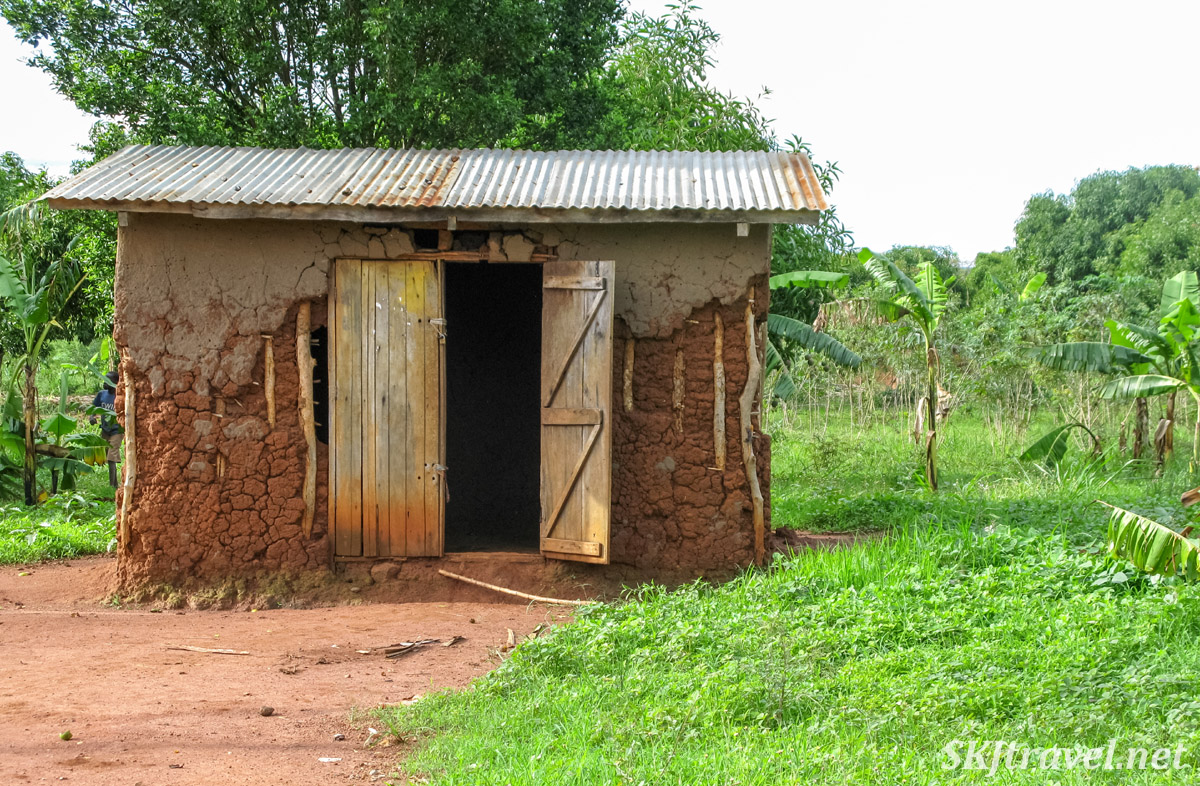 While Isaac drove us, I learned some things about Uganda and about his life, reflecting on the general situation of many lives.

A couple factoids. Population of Uganda is 34 million; population of Kampala city is 4 million. Literacy rate for current young people is roughly 40/45 percent, lop-sided toward boys having higher rate than girls. Primary school is free for grades K-7. After that, schools are fewer and farther between, and most kids must board which costs money. So it’s largely kids from wealthy families who get an education and poor kids drop out after grade 7 (or earlier), thus perpetuating a stratification of wealthy educated and poor uneducated. There are few student loans or assistance unless you get good grades … government assistance isn’t related to your financial need, only to the caliber of your performance.

Isaac, a very highly educated person in Uganda, succeeded academically while also working for the entirety of his life. I suppose perhaps his ethic of hard work could be indicative of his academic success. “Do you know what my first job was?” he asked (after having described jobs in his adult life). At the age of seven, he began working with his mom running a liquor still and making gin and selling it (mostly to entities like restaurants, etc.). It was perfectly legal for a child to be running a gin operation, yet I still find this an amusing job for a kid. Then when he was in the oldest grades in his secondary class, he began teaching the younger classes and continued (still continues upon request) teaching on and off to make extra money, including while he was attending university for his own studies.

He was a cab driver in Kampala, and still sometimes can come in on a weekend or some day when he doesn’t have anything else to do and make a little extra money since he has the cab license. Then he was offered a job at Ngamba Island, the dedicated chimp sanctuary first launched by the UWEC which was overloaded with rescued chimps, starting in a very low position of manual work despite his university education, and working up, promotion by promotion, until eventually he was offered a desk job at UWEC. Now he is one of the directors at UWEC. Yet, despite his posh office job (and side job of guiding safaris for foreigners), when he sees something needing to be done around the UWEC and nobody is doing it, he has no qualms about doing it himself. If a guest banda hasn’t been cleaned, he may pick up a wash rag and scrub the floor (I would like to say, the floors of my flat have been kept flawlessly clean), or somebody else in lower position has failed or lagged in their duty, he may perform it temporarily if he has the time to make sure it gets done. Do you know any company director in America, dressed in his fine business clothes, who would grab a broom and rag and clean the floors and showers? “I think it’s because of my upbringing, starting poor and considering any work/job worthy of performing, that I’ve been successful,” he says.

I asked a question of Robert once that was poorly received and I felt bad for asking it. He made mention of the maids cleaning my flat maybe reading my notes or magazines they saw in it. I asked, “Do you think the maids are literate?” I asked knowing the low literacy rate, especially for women, and making the egregiously ignorant theory that the maid position was perhaps for the less educated. He told me, that probably anybody working inside the UWEC had some education. Because there are so few jobs available in Entebbe, and in the whole of Uganda, even the most menial job is likely to be filled by someone with an education rather than someone without. Many employees are just like Isaac, starting at the lowest position, grateful for a money-generating job, with the intent and ability to work their way up.

I learned more about the education/job system from several people working at UWEC.  If you score well in secondary school, you will be offered a position at university but you don’t get to choose the field you will study for. You put down your top 5 requested fields, all fields being assigned a minimum grade score, and if you don’t score high enough for your first request, your second is considered; if your score still does not match for the second, your third is considered, etc., down the line. Two of the zookeepers I work with at UWEC had wanted to go into medicine but didn’t have high enough scores, and were offered an education in a field lower on their list, being wildlife management. Having completed this degree, if they want, they could now pay to go back to college and get the education they first desired, but both of them have decided they enjoy working at UWEC, and if they pursue further education, will continue in the wildlife field. Robert is the person I work with the most, and he obviously is smitten with the chimps and has a genuine interest in and affection for them. The other day, he was working in the mammal section of the zoo and missed the introduction of a new enrichment item to the chimps. I showed him some photos from the event, and he said sadly, “I should have been there for this big event in their lives,” as if he’d missed his child’s first steps.

Isaac owns a mixed-breed cow at home that produces good quality and copious milk for his three daughters. It cost about 1.5 million shillings. A motorcycle for a boda driver (motorcycle taxi) also costs about 1.5 million. A regular cow costs more like 6 or 700,000. But I think it’s interesting a high grade cow costs the same as a motorcycle. (exchange rate, if you wonder, is about 2500 schillings to 1 USD)

We talked more with Isaac about bride prices, as I’m so fascinated with this subject. Apparently divorce rate is quite high despite this convention. Technically, if a couple gets divorced, the bride’s family should refund the bride price. If not, you can go to court or make whatever other arrangements family-to-family. If there are kids involved of course it’s more complicated.  Bride price varies wildly depending on the tribe, family, etc. The bride and mother (primarily mom) set the price, but it’s negotiable. I asked Angela, another zookeeper at the chimp house, about bride prices. She is the only woman I’ve spoken with on the subject (they are few and far between as zookeepers at the UWEC). Angela phrases the bride price as “an appreciation of the bride’s parents for raising their daughter.” Sounds much nicer that way.

So that all doesn't have much to do with roadside scenes, but it's what we talked about while driving and I found it interesting, and I thought you might, too.