Typical Day at the UWEC

So what all goes on at the UWEC? Here's a little tour around some of the activities.

I already told you about my first activity of the day, feeding the chimpanzees porridge. Then cutting up fruits and vegetables and feeding the patas monkeys and oribi. 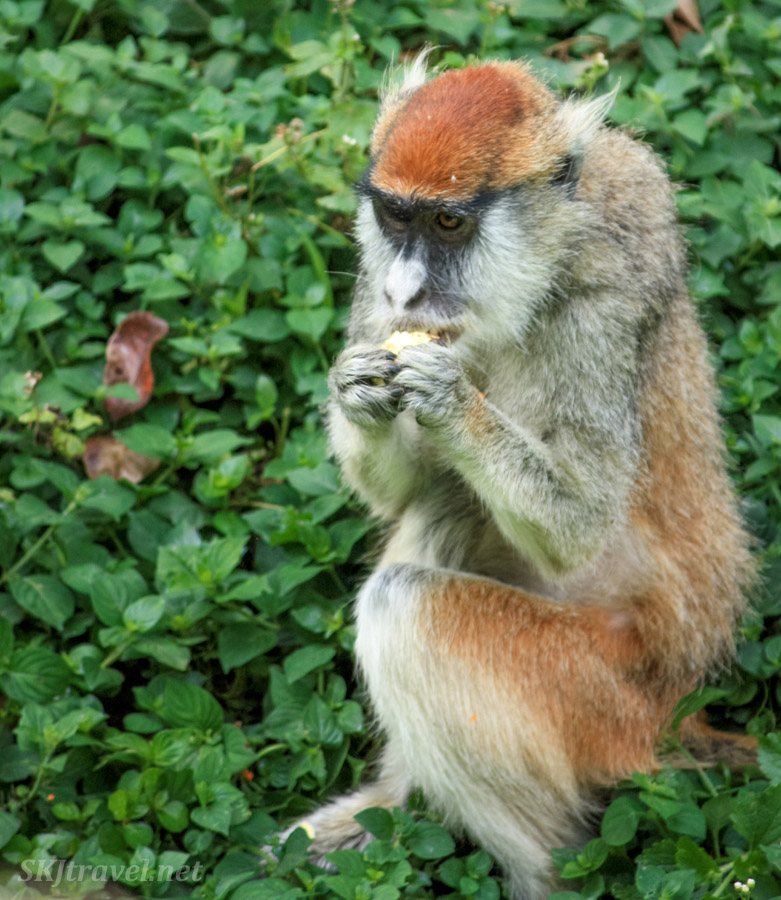 Elsewhere around the UWEC, zookeepers are collecting grass from around the UWEC grounds to feed to some of the hoofed animals in various enclosures, and yes, cutting up more tons of fruits and veges for the critters. The produce and meats are delivered to the distribution room, where the keepers then weigh out the food and separate into crates for the various animals. 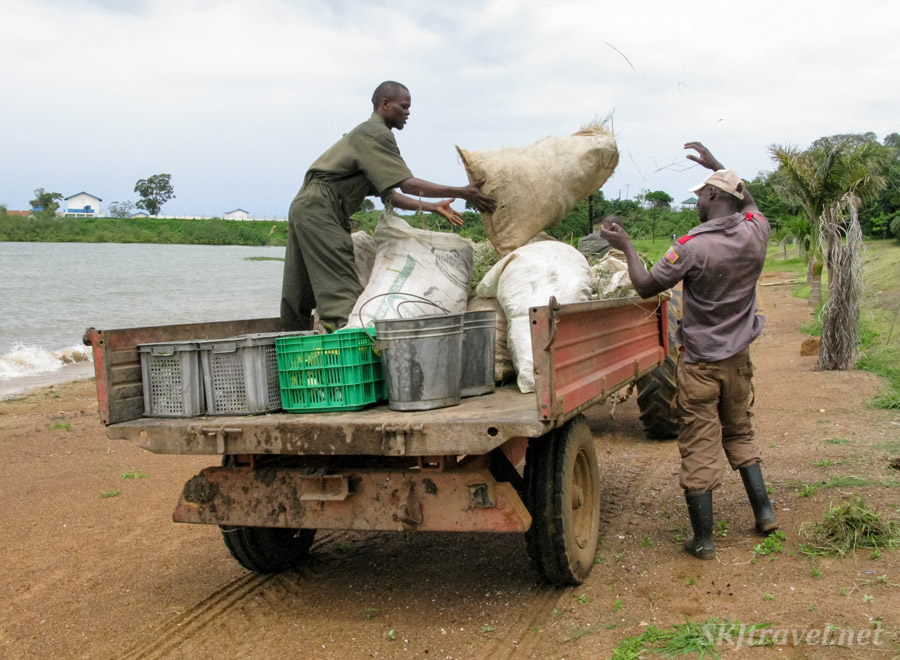 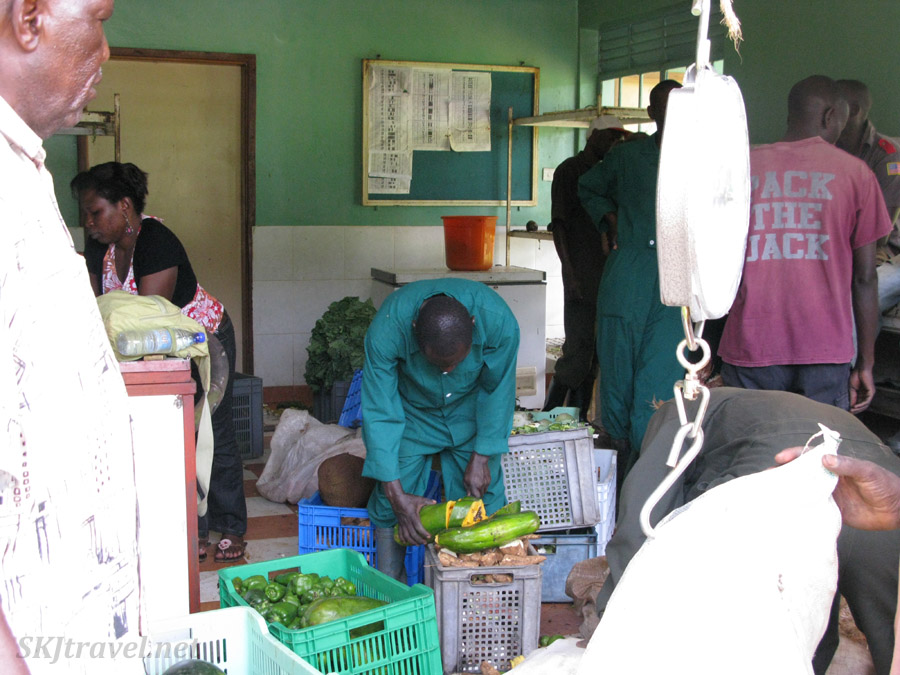 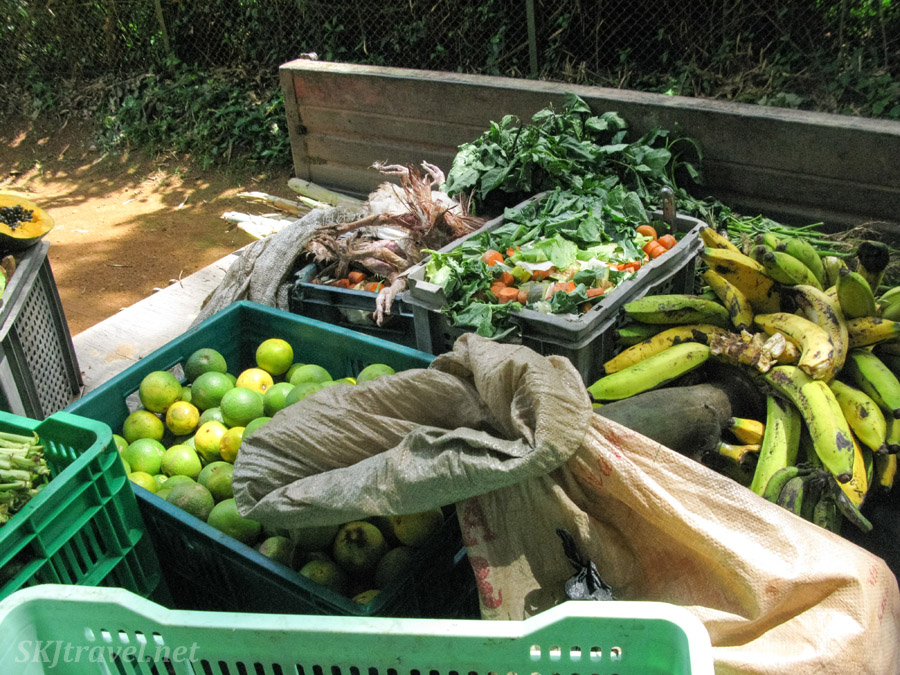 The grass and produce are put in the back of the tractor to make the rounds to the giraffes and ostriches who also share their space with eland and cow. First the giraffes emerge from the forest to follow the tractor. 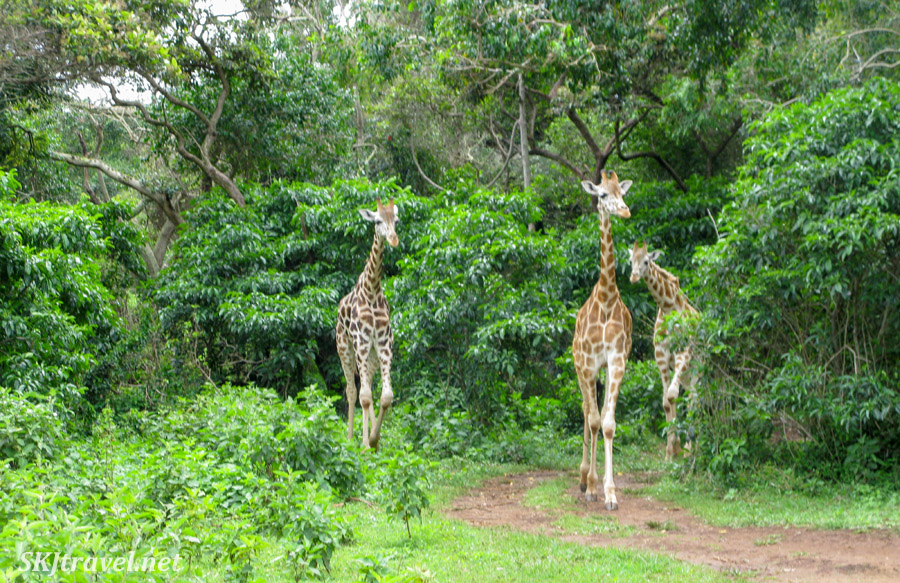 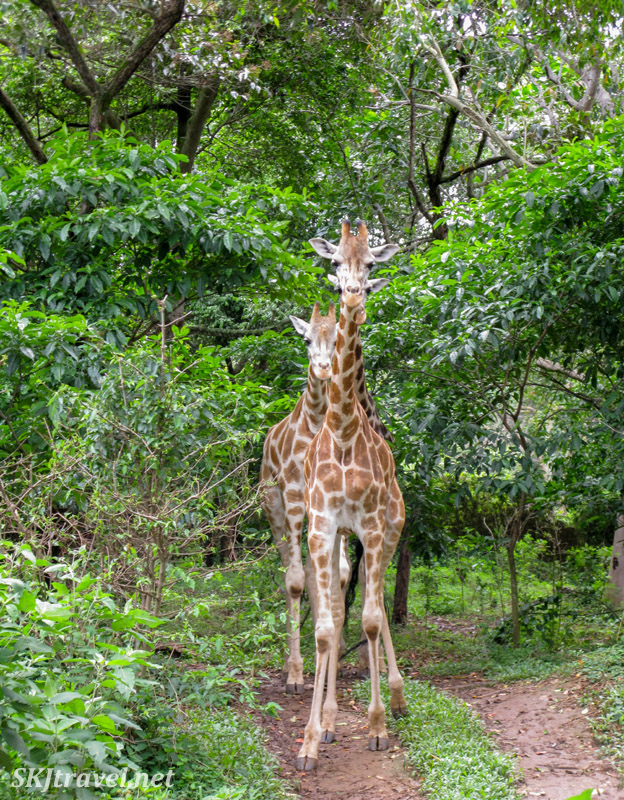 Then the ostriches come running in. I was a bit frightened of the ostriches, to be honest. They were quite aggressive and those beaks are intimidating when they're hurtling toward you at the end of a long neck. 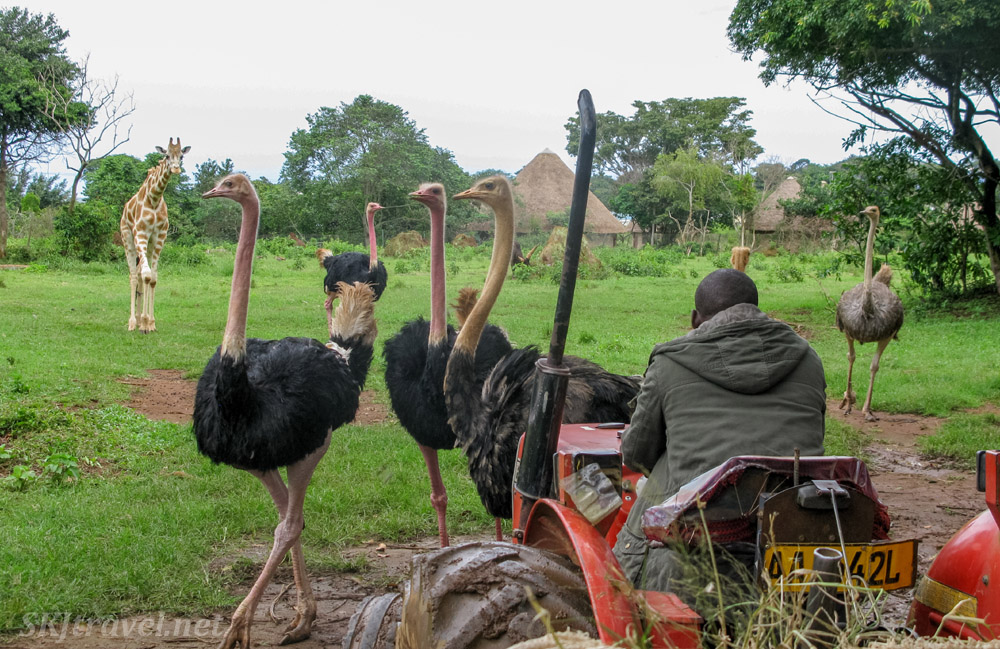 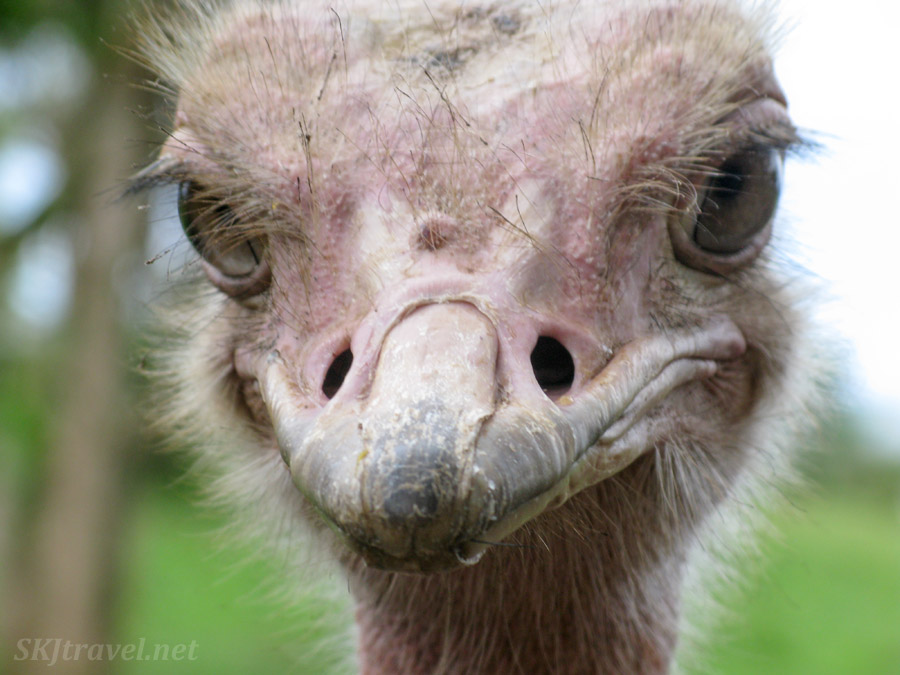 The cow tries to nibble off the back of the tractor as we drive in. But the eland is more patient. 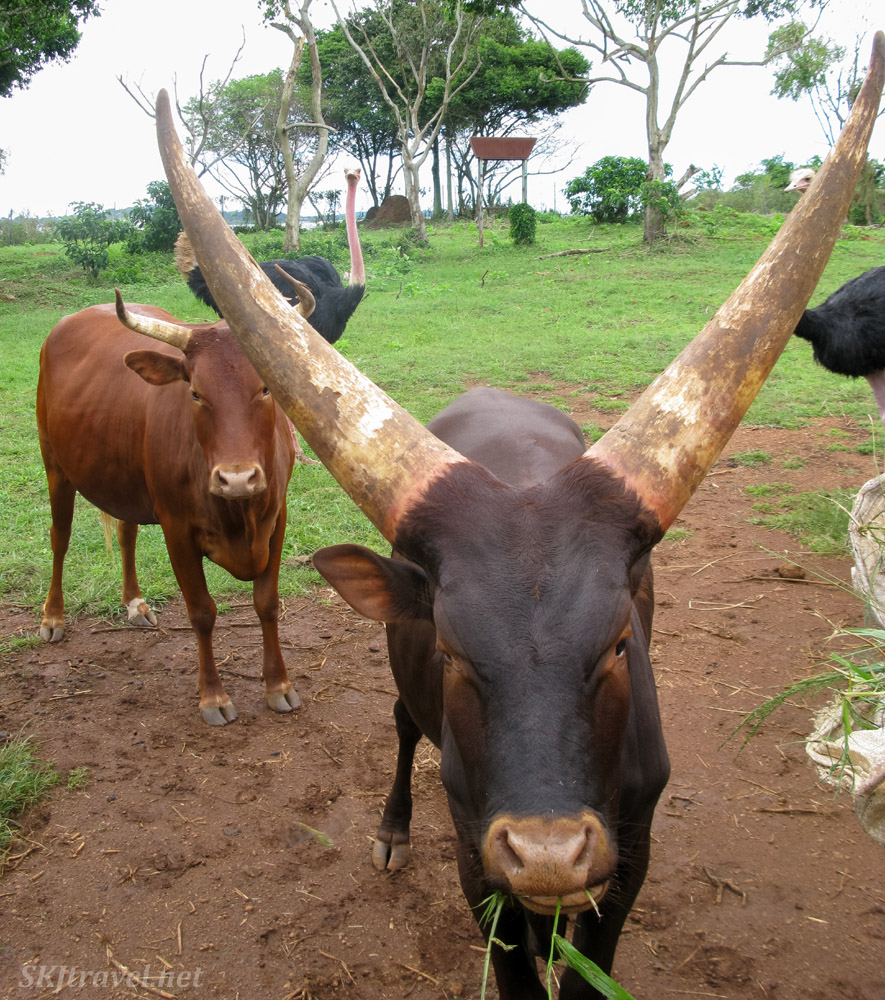 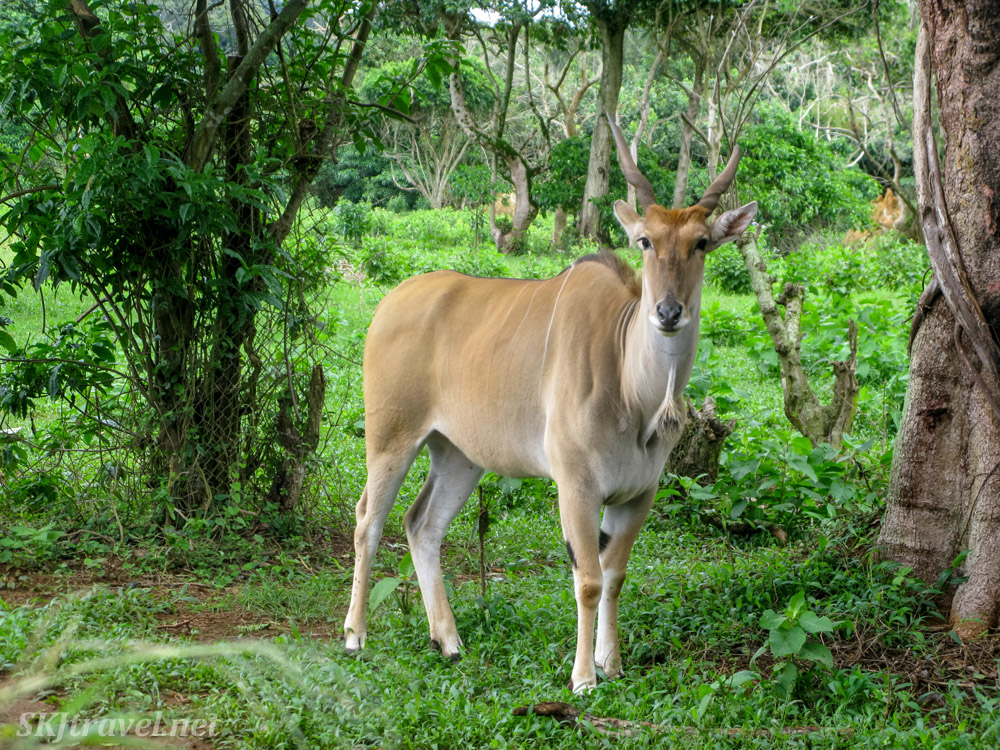 The giraffe is so gentle he eats right out of my hand; I could practically kiss him. (but I didn't try to) 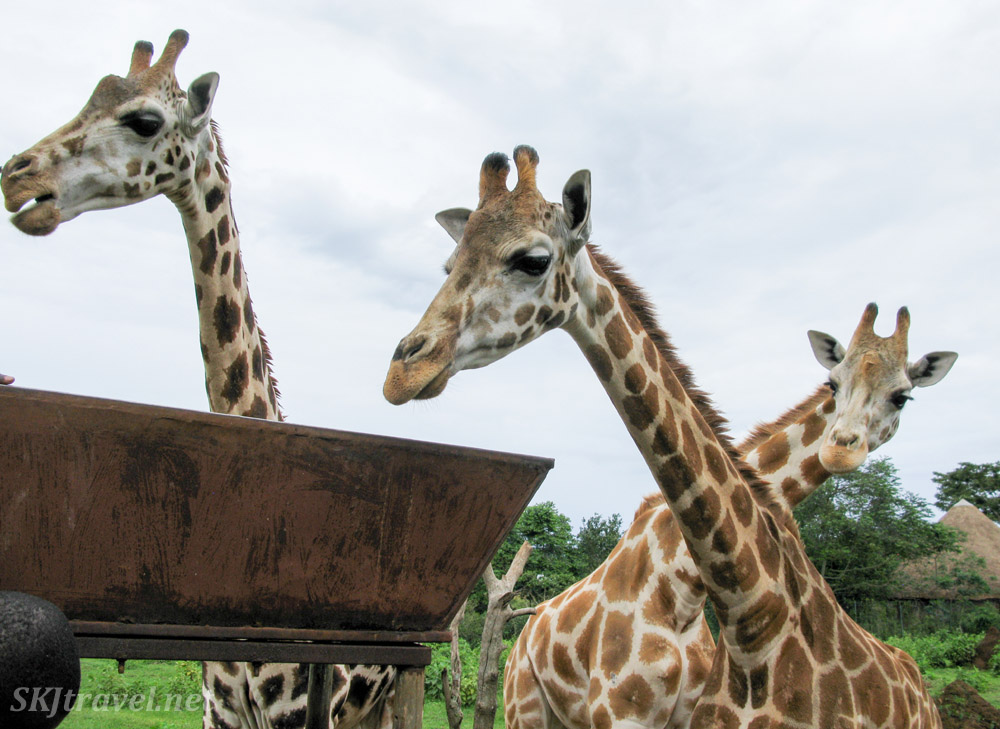 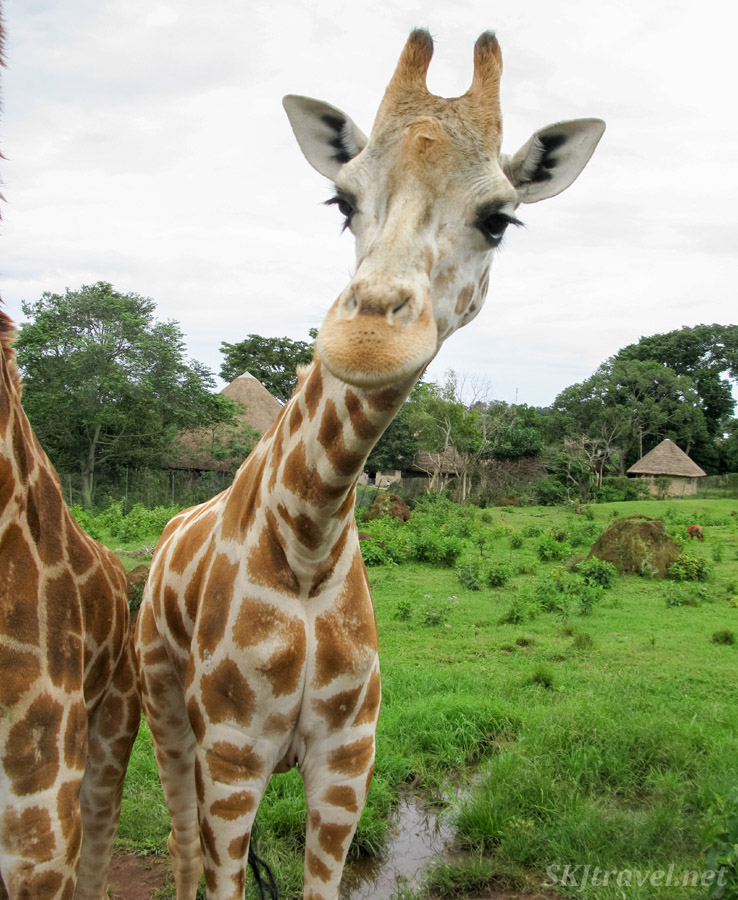 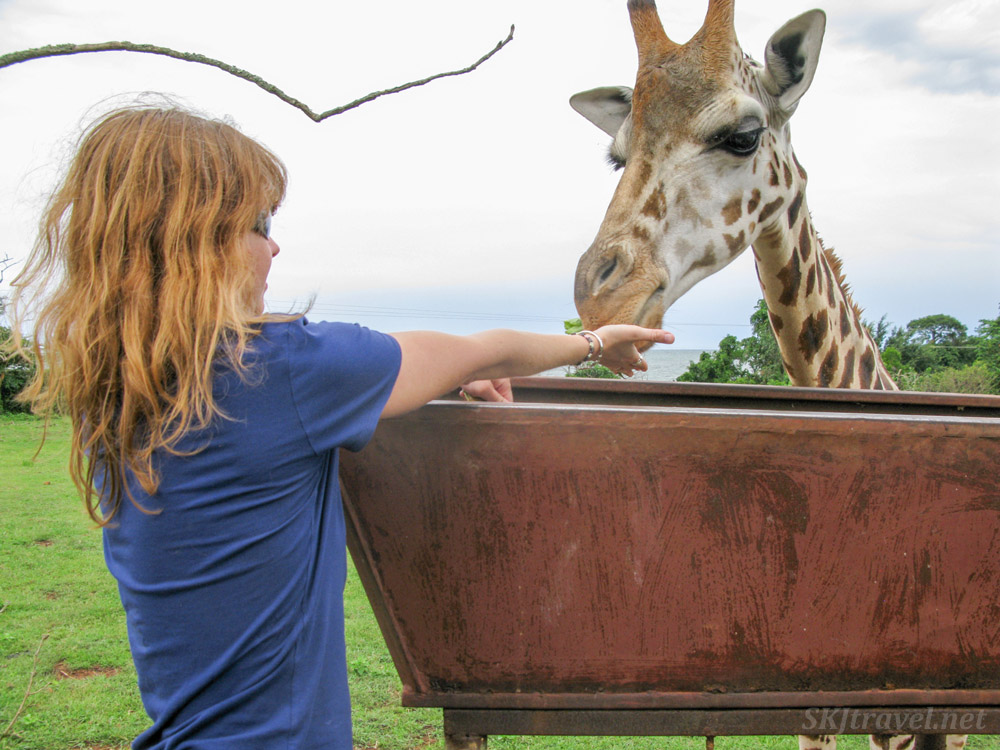 Other critters to visit in the morning include the water buck. An adorable young one currently in residence. And the white rhino, who is a gentle creature. I was far more anxious about feeding the ostriches than the rhino! 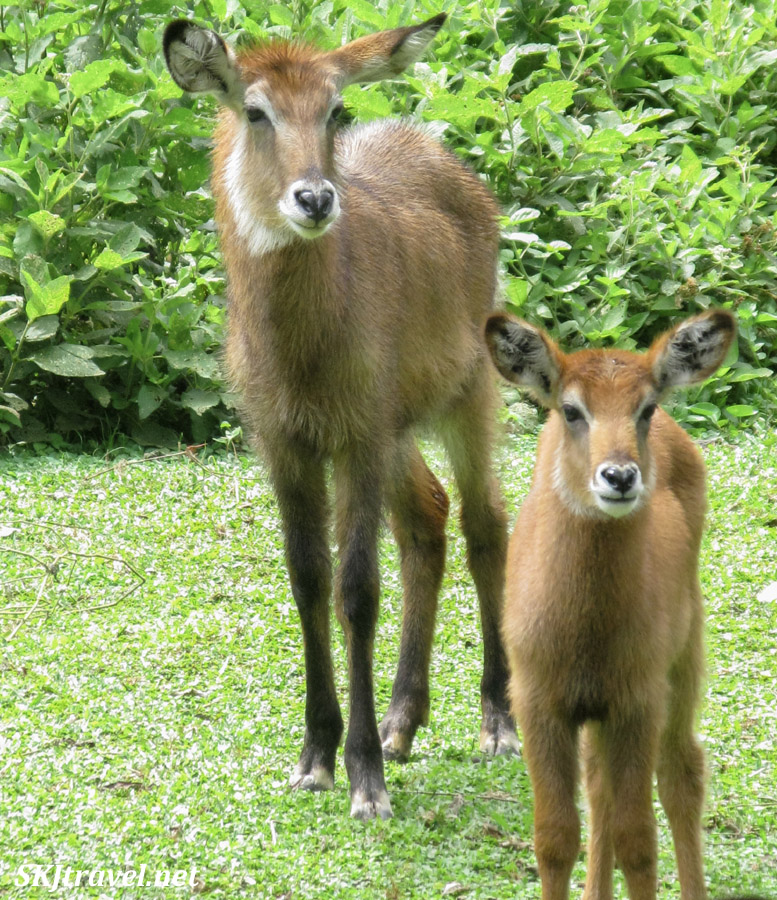 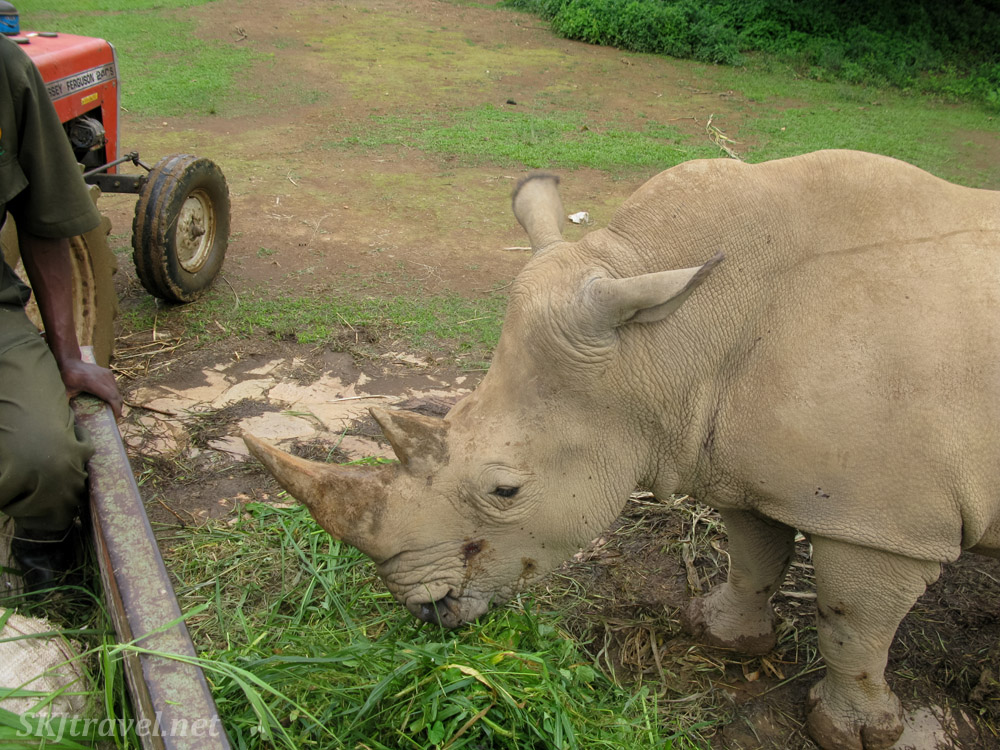 This is me showing my impressive strength (ha) in hoisting up a bundle of grass with a pulley. 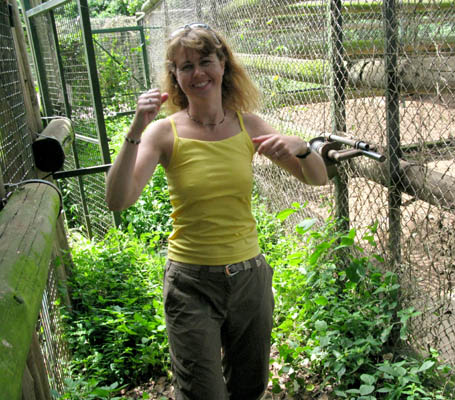 If we've run out of fish to feed the birds (minus the ostriches who eat grass), we can throw a net into the moat around the chimp island and catch some. Once we caught a fish and when we looked in its mouth, the mouth was completely full of teensy-weensy baby fish. I'd never seen anything like that. We threw the mom back in the water. A variety of life lives in those waters, including a very large monitor lizard! Onapa watches us with interest from the island. 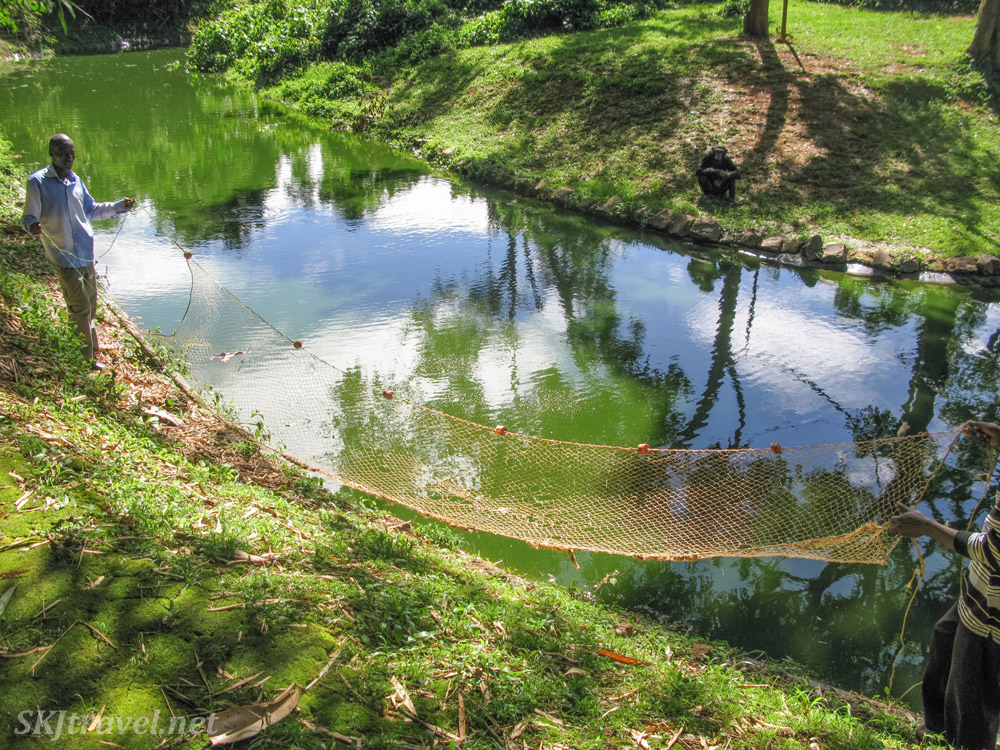 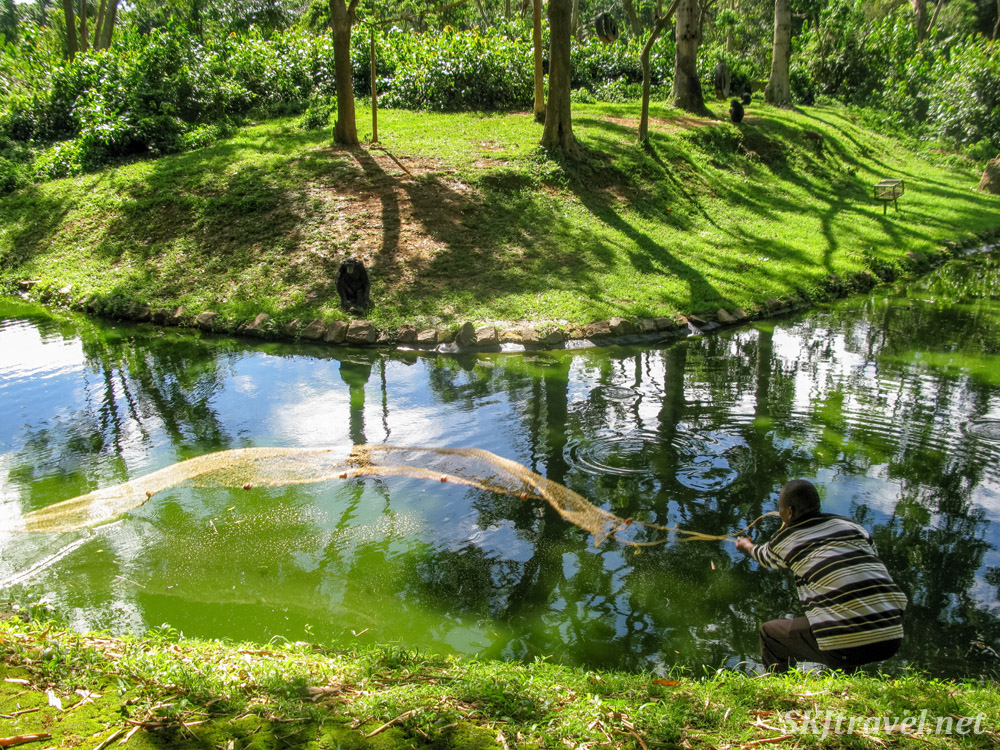 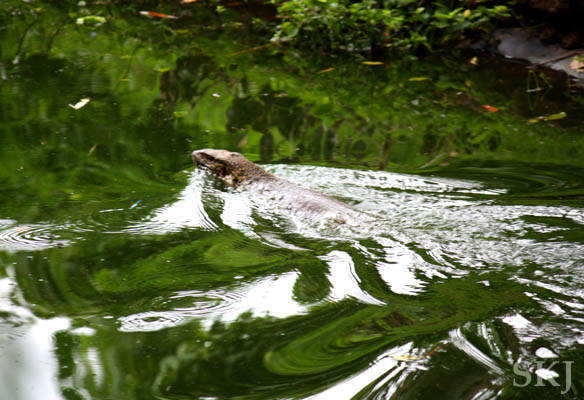 After the animals are fed, it's time to feed me. There is where I sit at the shore of Lake Victoria, my view as I eat, and the kitty who sits in my lap while I wait for food and then of course begs for food while I eat. He is being adopted by the other American volunteer; she completed shots and paperwork to take him home with her when she returns. After eating, I am all big and strong and read to slice and dice yet more food. ha ha. And also strong enough to shoo away the vervets that constantly try to steal my breakfast off my plate. I learned eventually to simply not set my plate on the table, but to hold it to my chest while I eat. 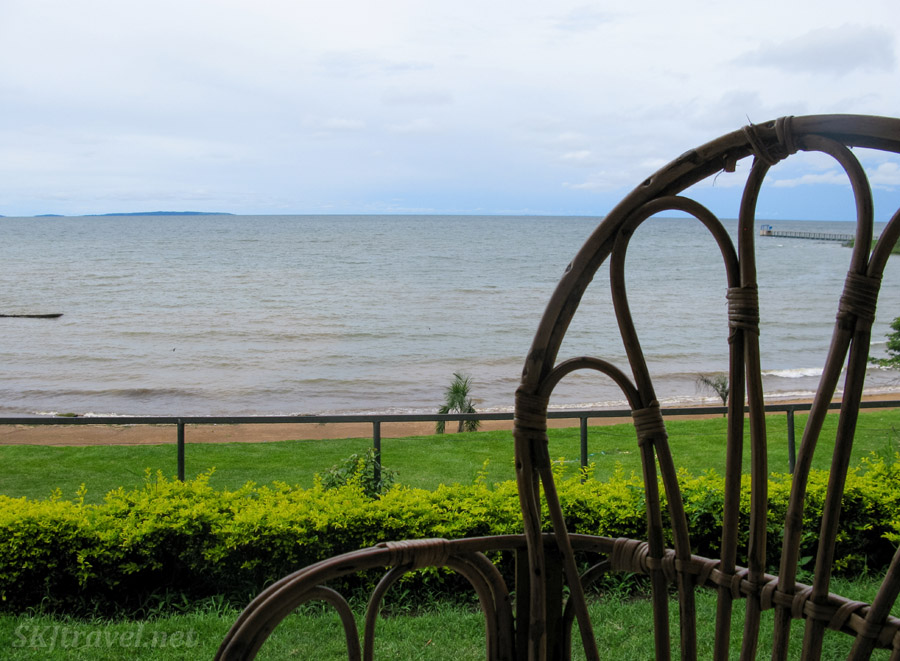 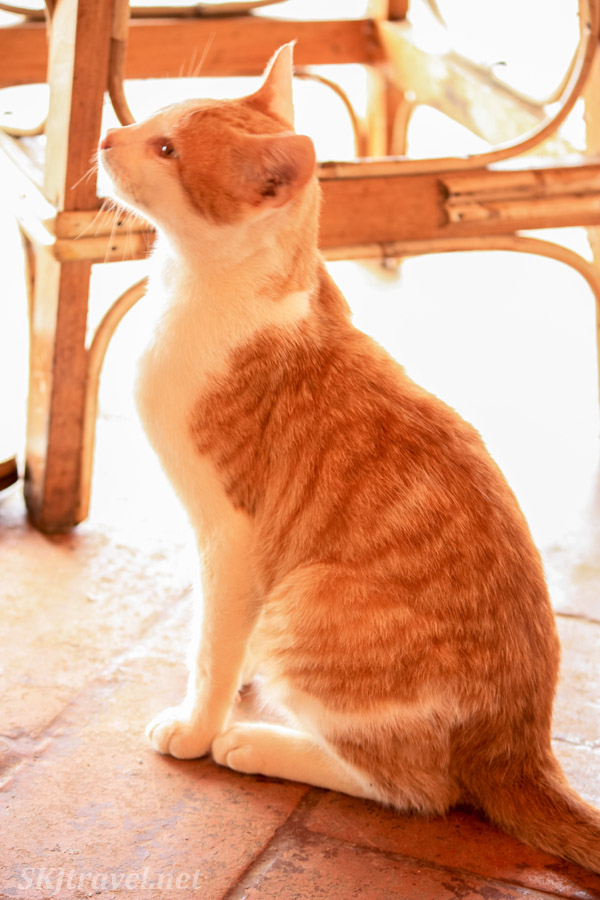 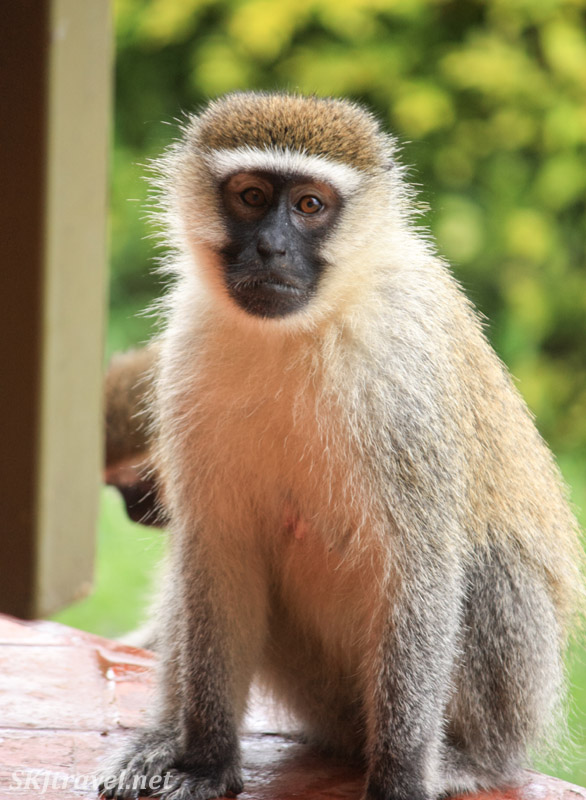 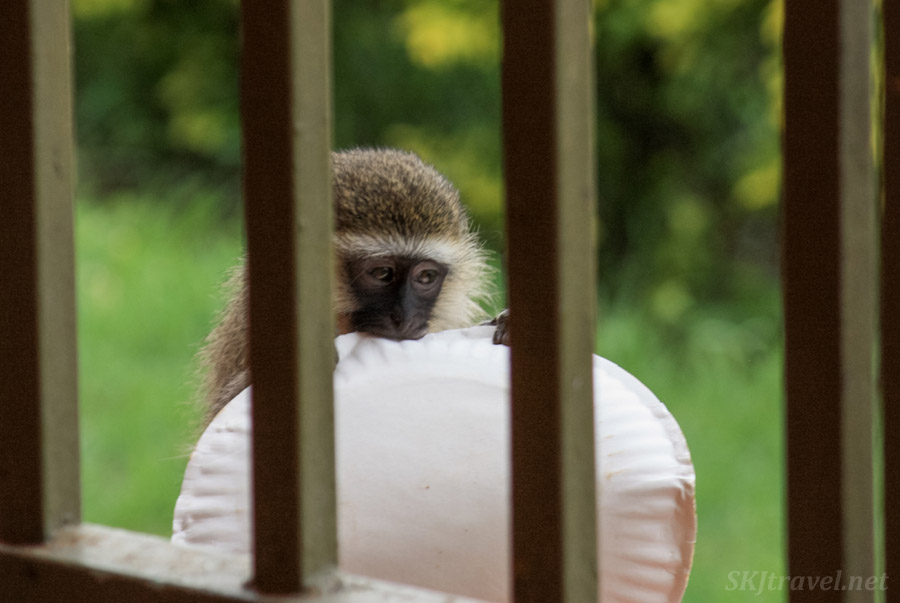 One of my favorite things was being able to watch the grey crowned cranes that freely roamed the grounds while I ate. 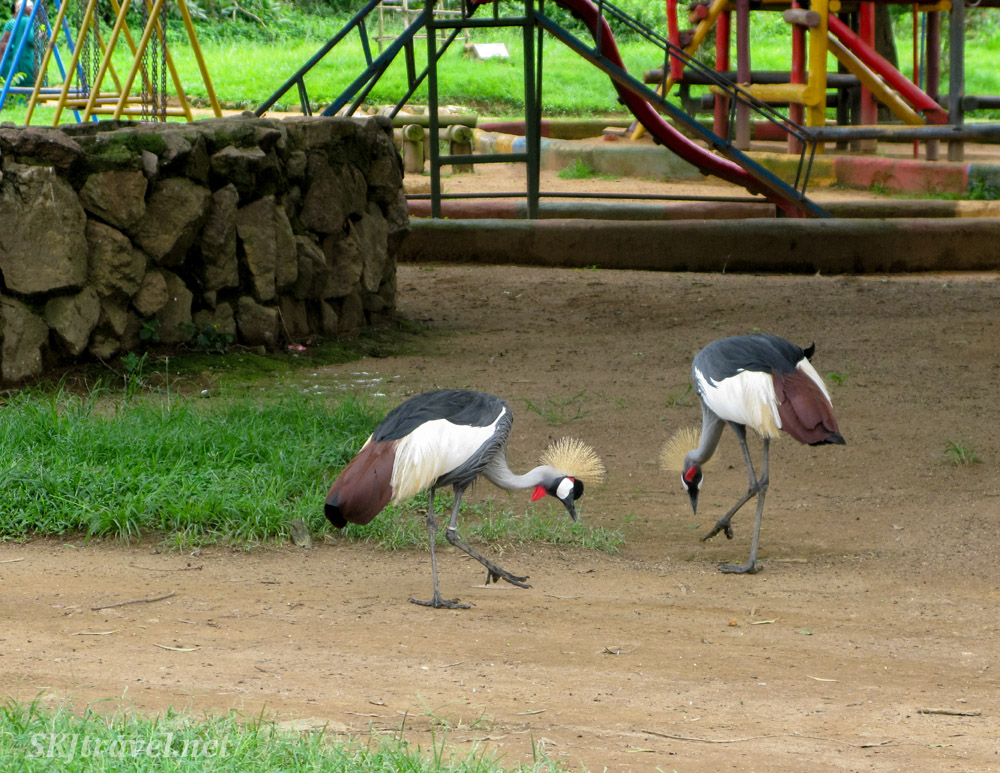 On the late shift, at about 6pm, the chimps are brought inside and fed some more porridge. The big cats get a serving of raw meet and are put in their night enclosures. This is me laughing at the willpower I'm exerting not to step back and be intimidated by the lion, feeding her an appetizer as a distraction while the male is being let into his own nighttime enclosure, and the leopard into his, where they will eat their dinners. Each sleeps in a separate cage. 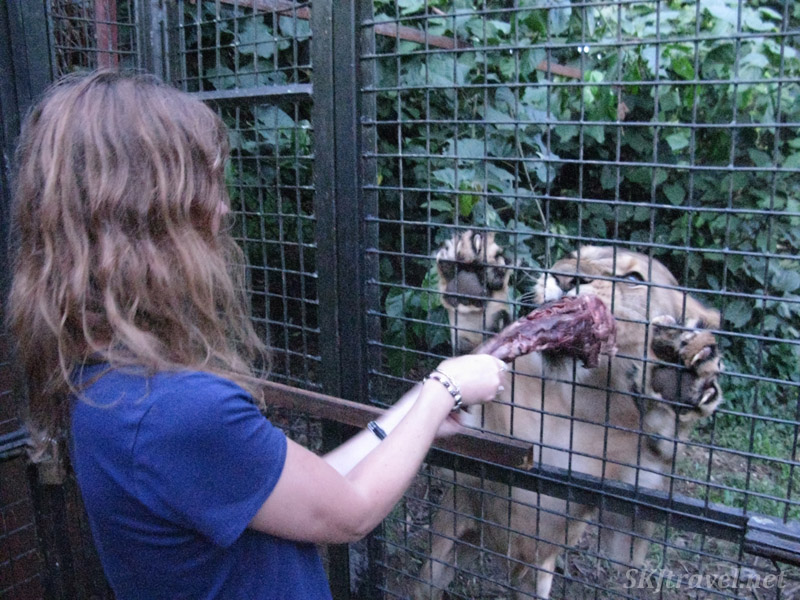 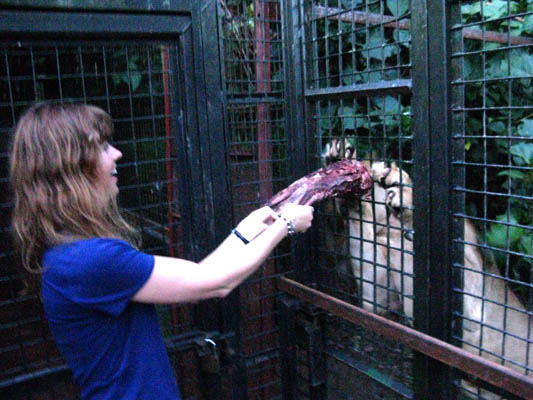 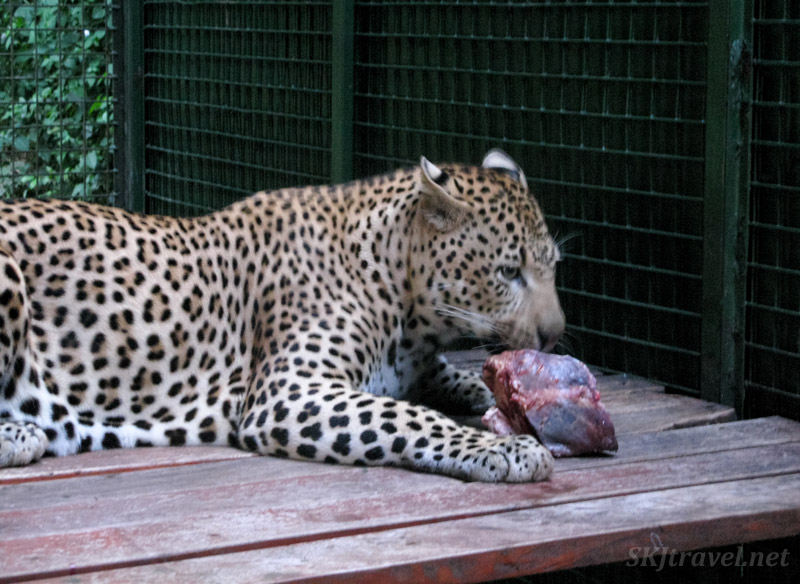 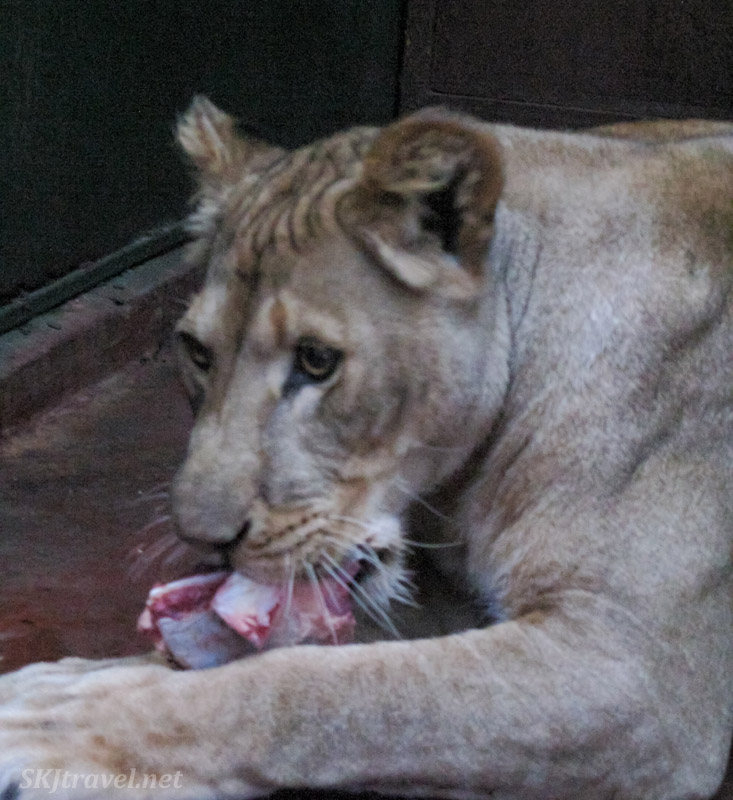 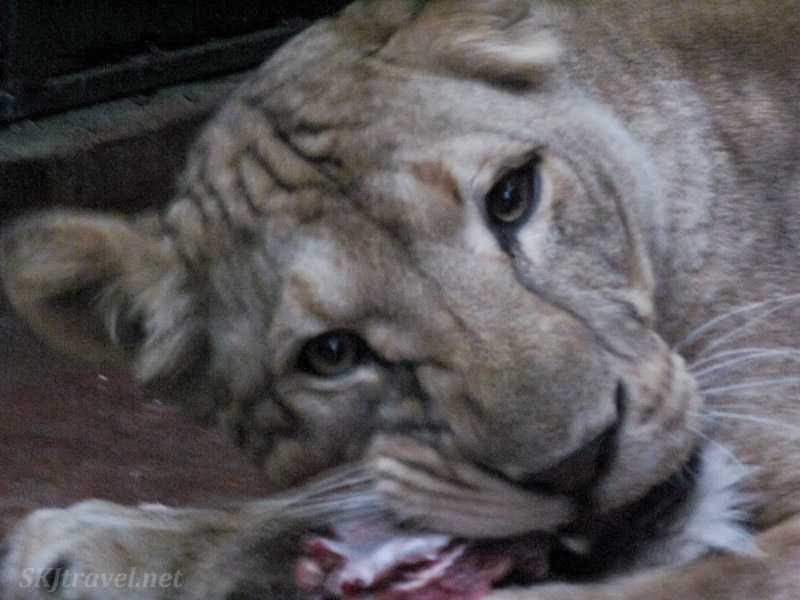 Then Shara eats dinner and goes to bed. Right now she has run out of time on the internet and must leave. So I end my day here.