Livin' It Up in Queen Elizabeth: Uganda Shares More Wildlife With Me

During my independent travels, after I’d been to the Crater Lakes area and seen the witch doctor (see post “Witch Doctors in the Rwenzoris”), I moved on to Queen Elizabeth National Park. Yes, named after the British monarch. This was my brief dabble in posh and luxury. I was a regular … well, queen! OK, perhaps only princess.  I shan’t bore you with the list of justifications as to why I so pampered myself; I will provide only the one truth that it was all about logistics rather than merely spoiling myself for the sake of spoilage. So, I had a private driver and stayed in a 5-star hotel with full board, and by luck, my room was directly off the pool which was an internet connection area, and it carried over inside my room. The beers from the poolside bar carried over quite nicely into my room as well, actually. View off the pool balcony, a few steps from my porch (sunset): 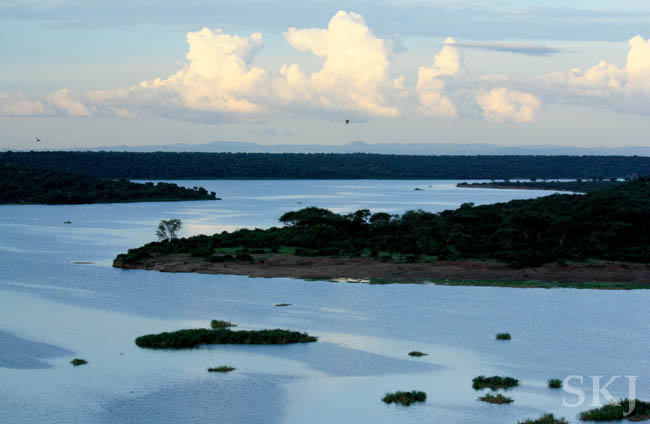 My driver was a college kid; his dad owned the tour company I had hired. Fort Portal, where I hired, is a pretty ritzy town by Ugandan standards. In fact, the country kind of holds it up as a model city. And my driver, Fred, was quite well-to-do in this ritzy town. He was really the first person I had hung around who was dressed all fashionably in strategically-cut and acid-washed jeans hanging low, boxer shorts showing above the waist. I know, you hoped this was only an American fashion horror, but it is apparently global. Darkly shaded sunglasses, crisp plaid shirt. Like everyone (and I mean everyone) in Uganda, with great conviction he pronounced me a liar for claiming my age exceeded the 20s age-bracket. For my dear readers who do not know how far off the mark this is, I will let you think this is only a mild stray. Two things make him stand out from the Ugandan crowd:  (1) he was extremely punctual; I daresay the most punctual person in the entire country. By the time I got to him, I’d completely adjusted to and accepted Ugandan time. I think he was surprised at this mzungu for not adhering to American time. (2) he was the only person who received the information that I was married but chose not to have children with merely a high degree of surprise rather than profound shock. Perhaps his relatively cosmopolitan life has opened his mind a bit. He was quite kind to me. I have this strange feeling it was partially due to a nagging fear that I really was as old as I claimed, and it was ingrained in him to treat his maternally-aged elders with care.

Unlike being at the UWEC where Steph and I were about the only white people on the grounds, the hotel was more than half full with white people, which suddenly made me feel odd. But in a pretty wild coincidence, I ran into the Japanese woman who lived next to me at the zoo … there are 3 apartments joined together like townhouses, and I lived in the furthest one and she lived in the middle one … who was working at the UWEC for 2 years on some kind of exchange or something. There at that swanky hotel! She had taken the weekend off and come with a group of Japanese people to see the park.

The road between the park entrance and the hotel, which we had to travel several times to reach other destinations, was teeming with elephants. Such a joy. I was tempted to ask Fred to just drive back and forth along this road for a couple hours. I always wonder whether to put my favorite photos at the beginning or the end of a post. There are many in this post that I quite adore. But as I am partial to elephants, I was giddy at seeing this tiny tot. So here ya go, right off: 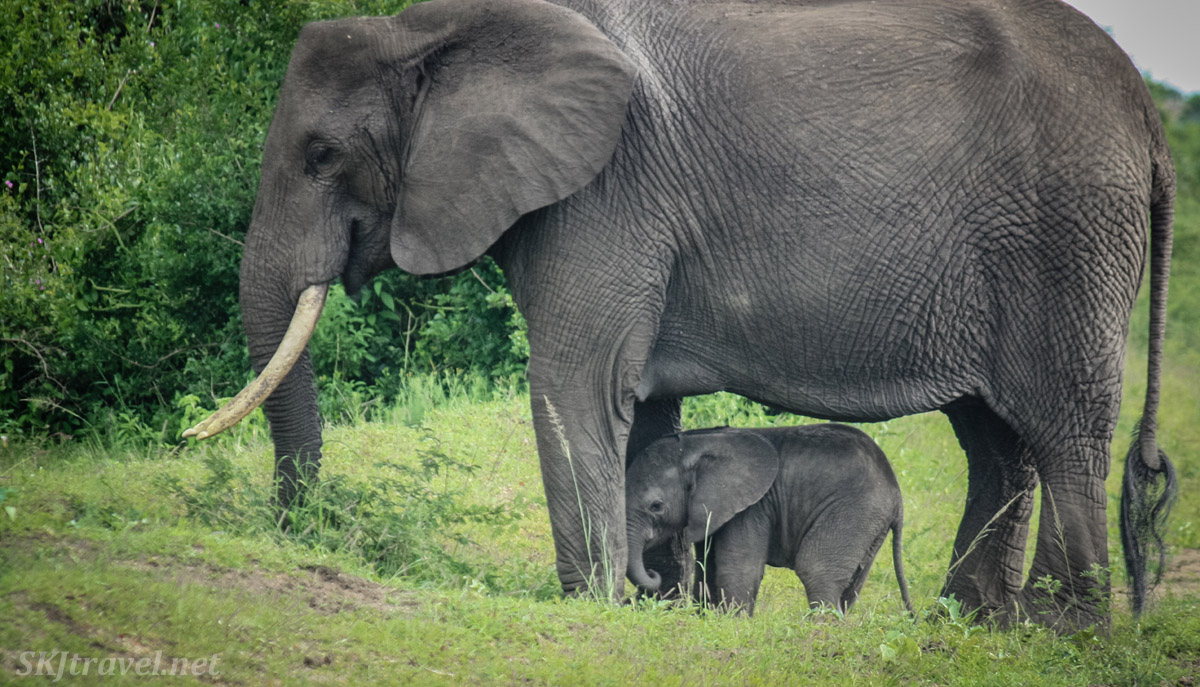 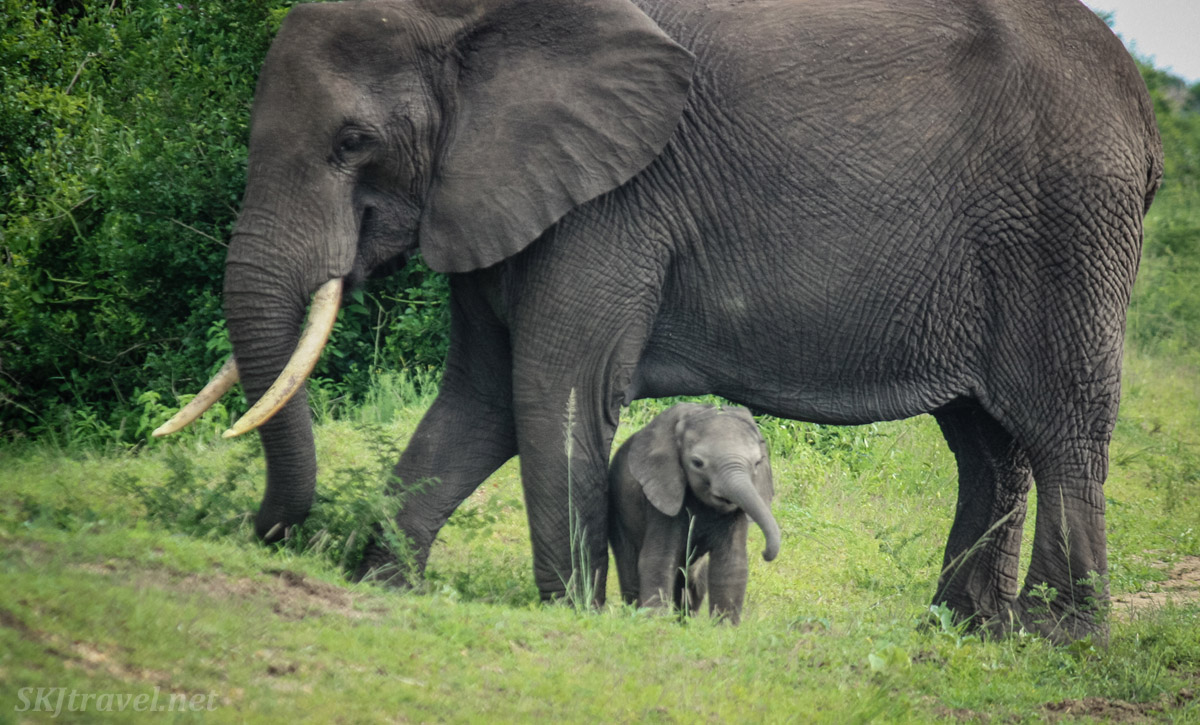 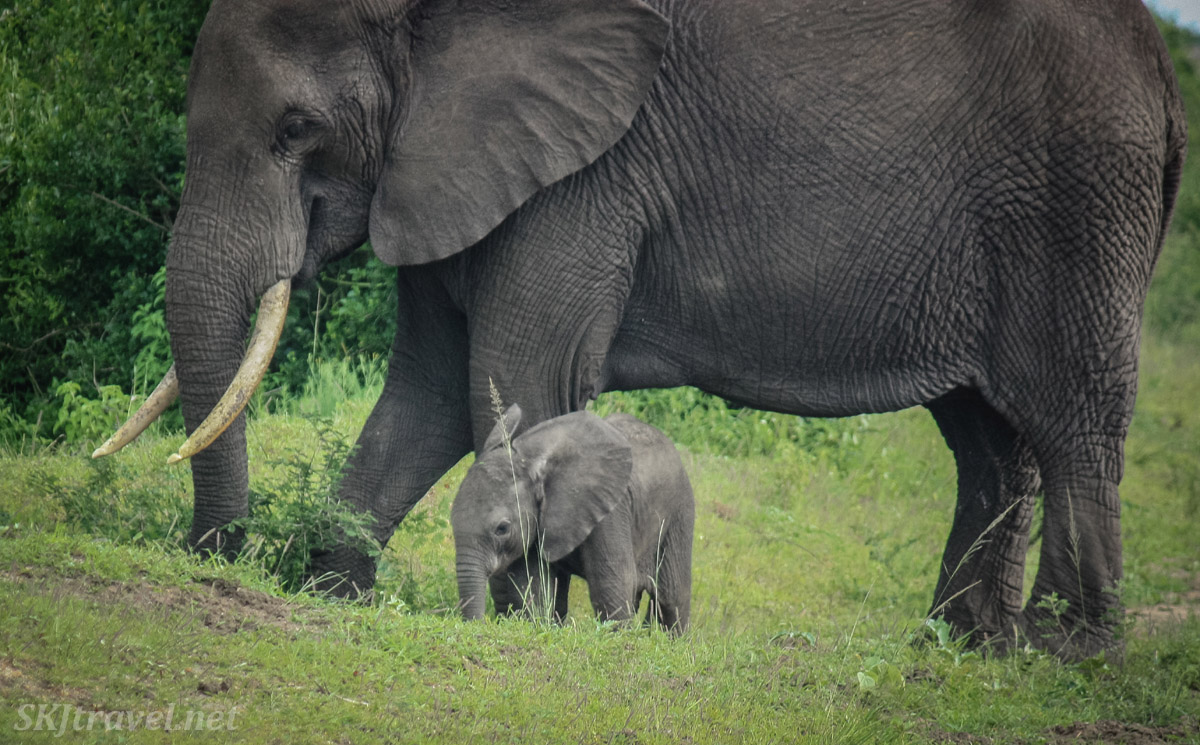 So after arrival at my swanky digs, I took a boat ride up the channel between two lakes encompassed by the park. My Jeeves drove me down to the boat launch and was there waiting to pick me up and drive me back the ½ mile to the hotel. Hee. The boat ride was lovely. Though there is not the wide diversity of wildlife found in Murchison Falls NP, there are still a lot of the big favorites. Lots of elephants and loads of hippos. This was my third boat ride in Africa in which I was to see hippos, but the other two were a slight photographic disappointment in that I never got any good shots with the hippo mouths wide open. Always too slow on the draw. But this time, they were yawning in spades. And it was amusing, this one lady onboard took it upon herself to be the official hippo-yawn look-out. She was convinced she could tell when one was about to open their mouth wide and she would sound the alarm. She was right quite a lot, so I paid attention and swiveled around to wherever she was pointing. 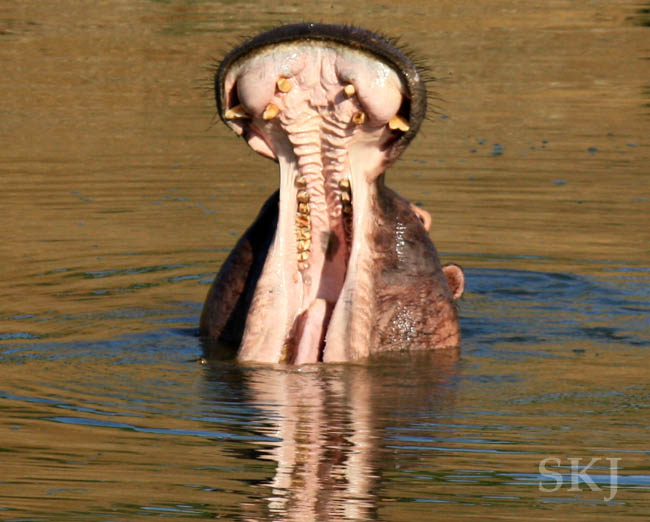 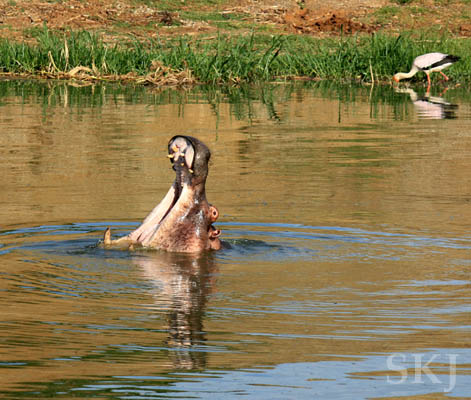 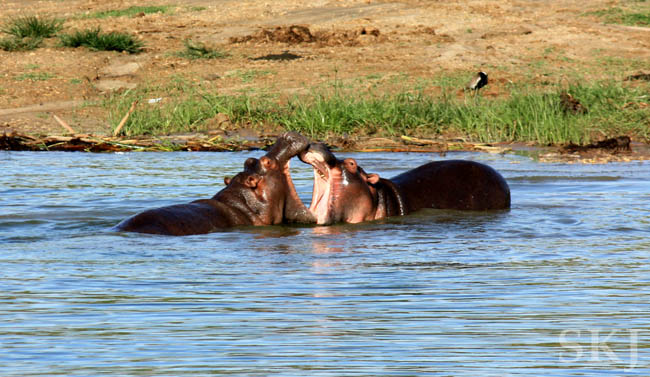 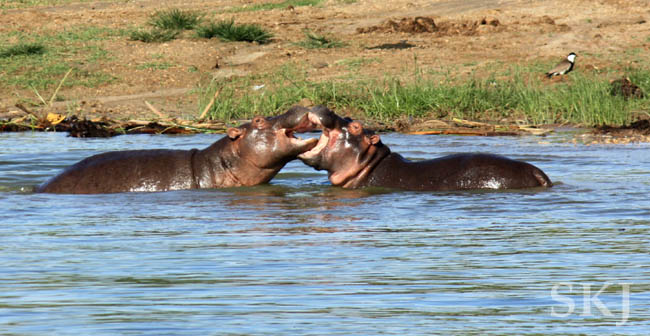 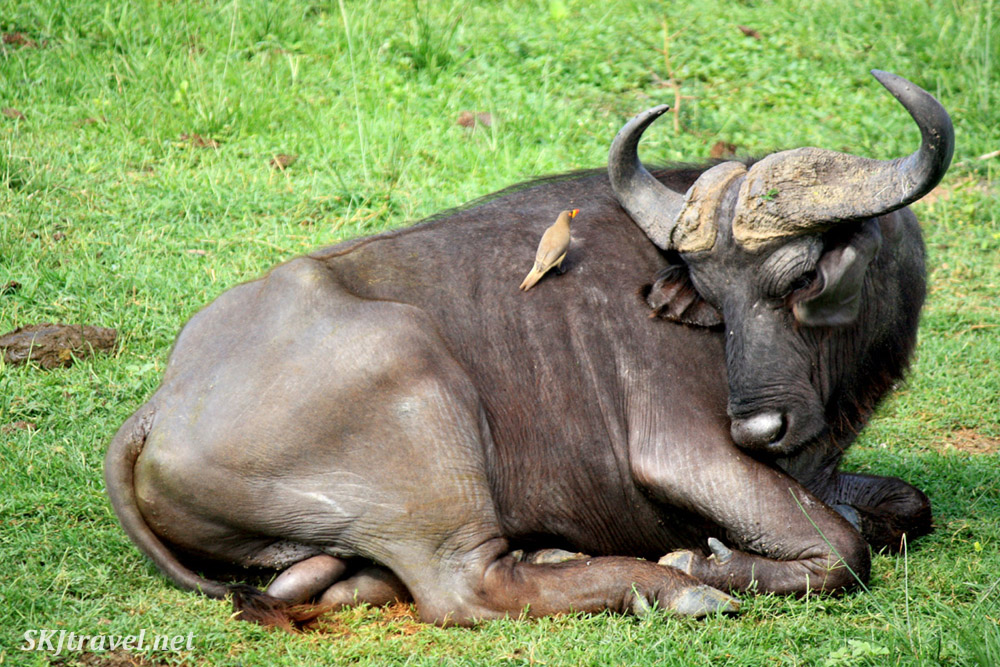 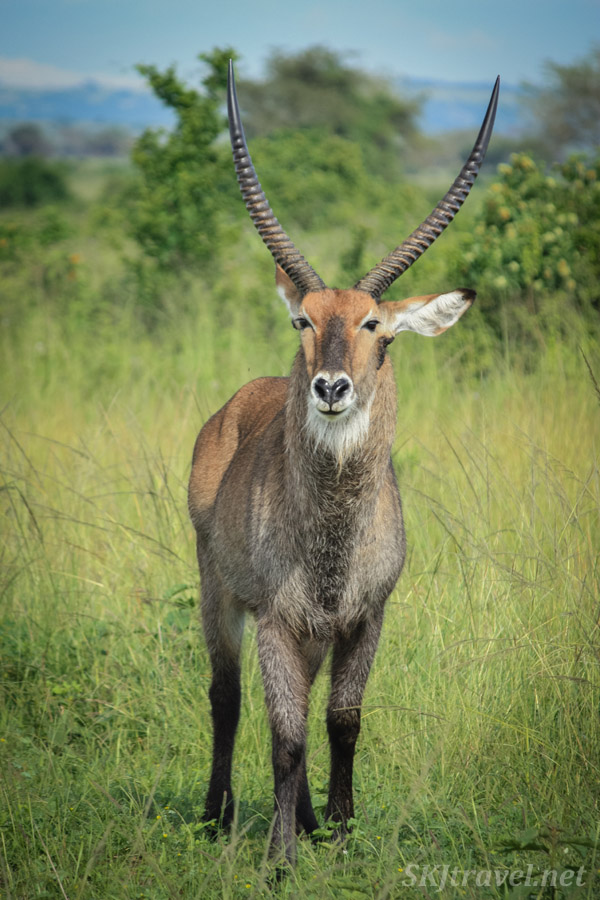 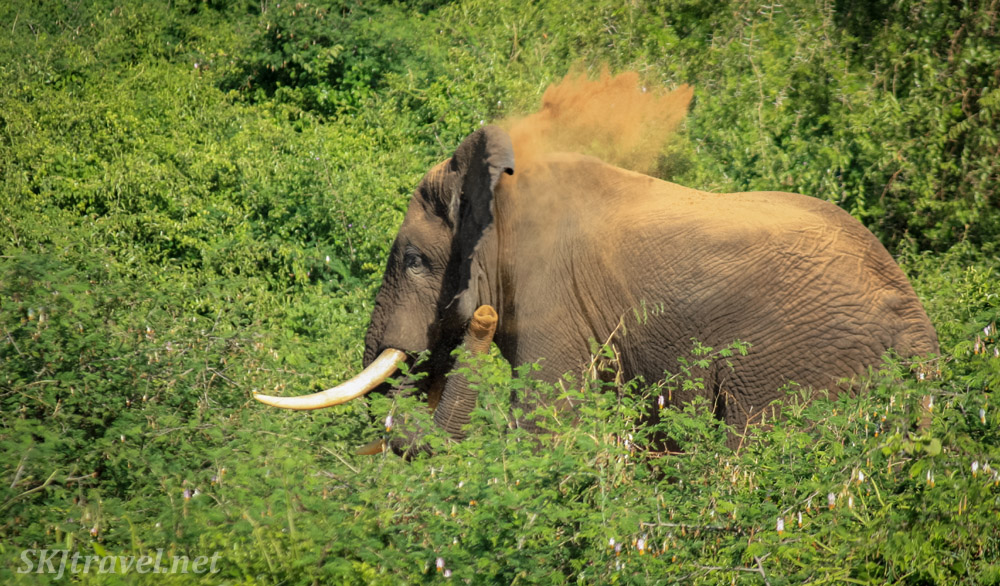 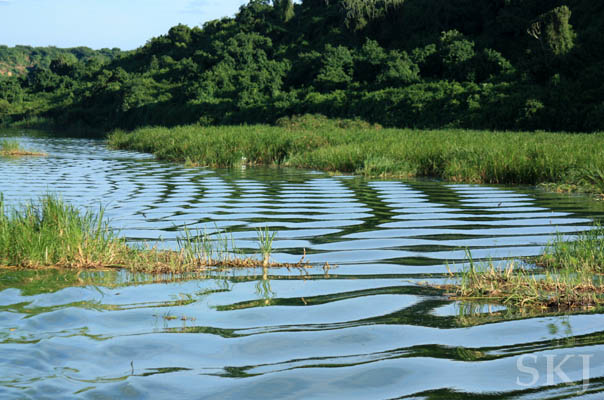 There are 20-something fishing villages inside the park. Unlike Bwindi, when QENP was established, “pre-existing” people living on the lake shores and fishing for their livelihood were allowed to remain. (All pygmy tribes living within Bwindi were forcibly moved off their traditional hunting and gathering grounds.) The villagers were swimming in the waters. After the large number of massive hippo mouths we’d seen plus several crocodiles, somebody asked the guide about how the villagers get on with the wildlife. Answer: not so well. The stats she gave for the last couple years were something like 3 people eaten by crocodile, 12 eaten by lion, 20-some killed by hippo, and I think an elephant caused a fatality as well. But this doesn’t alter their lifestyle one bit. To us it may seem strange and incredible they would keep living there like that. But I suppose it’s hardly different than Westerners continuing to live far away from their jobs and commuting on the highways 5 days a week when traffic fatalities occur regularly. Why do we keep living among all those cars when they kill people all the time? 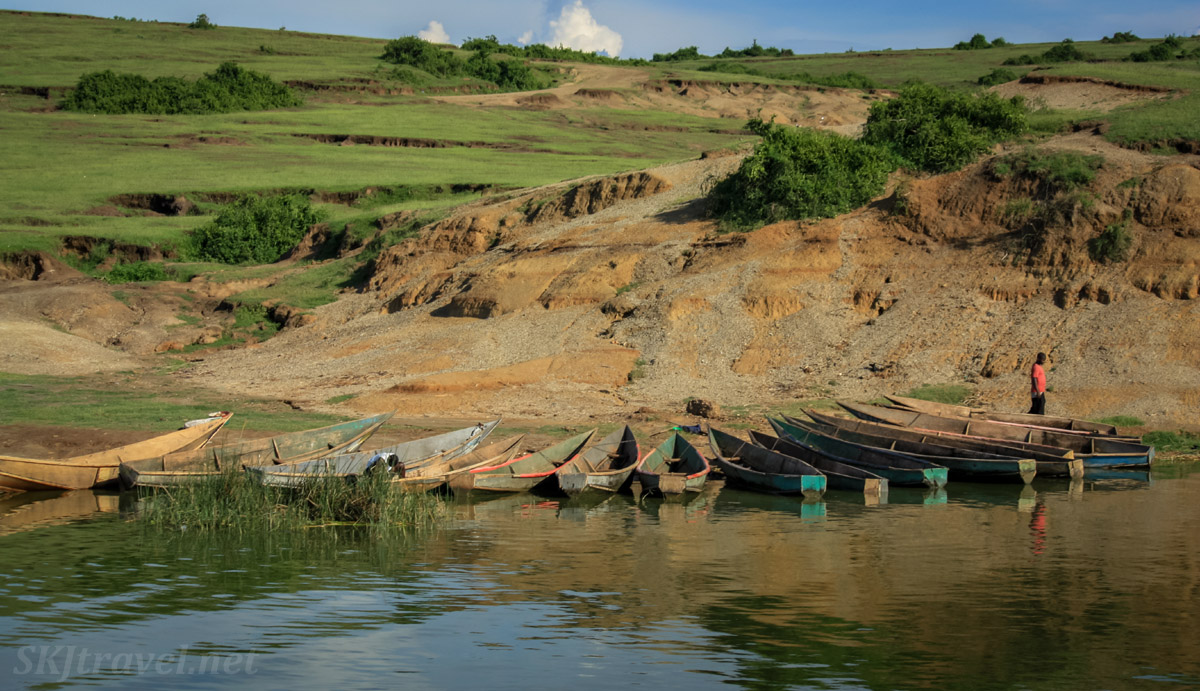 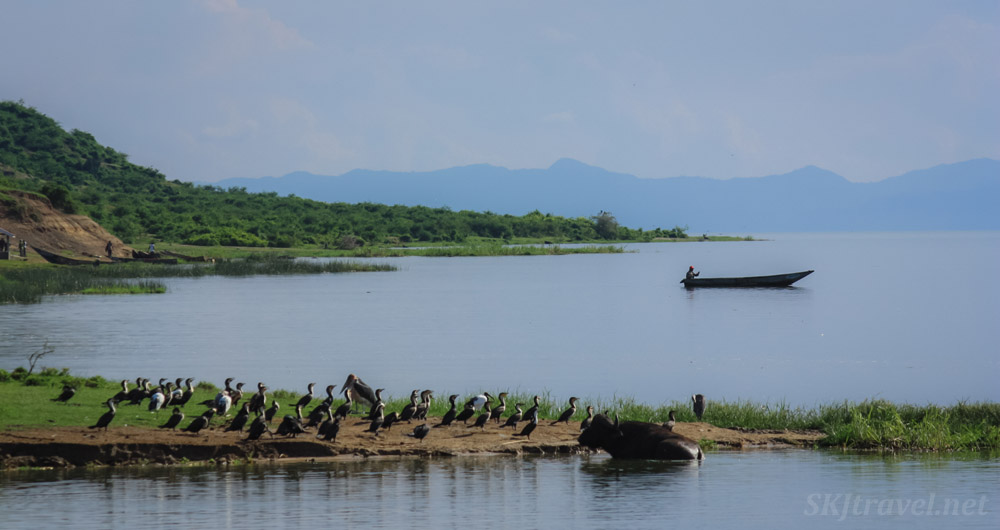 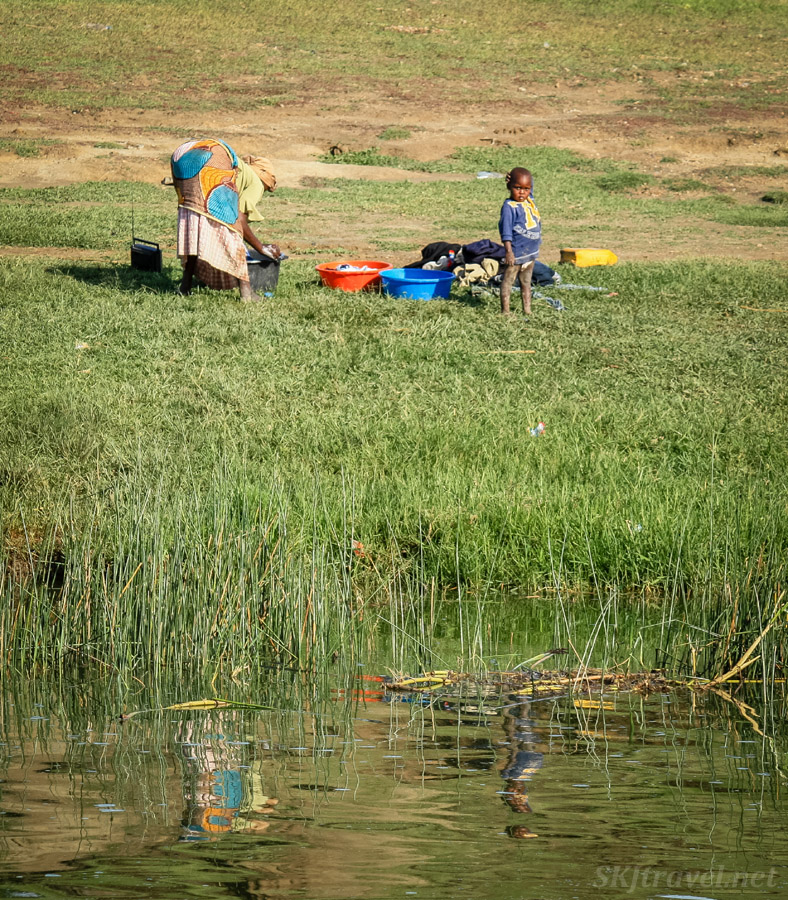 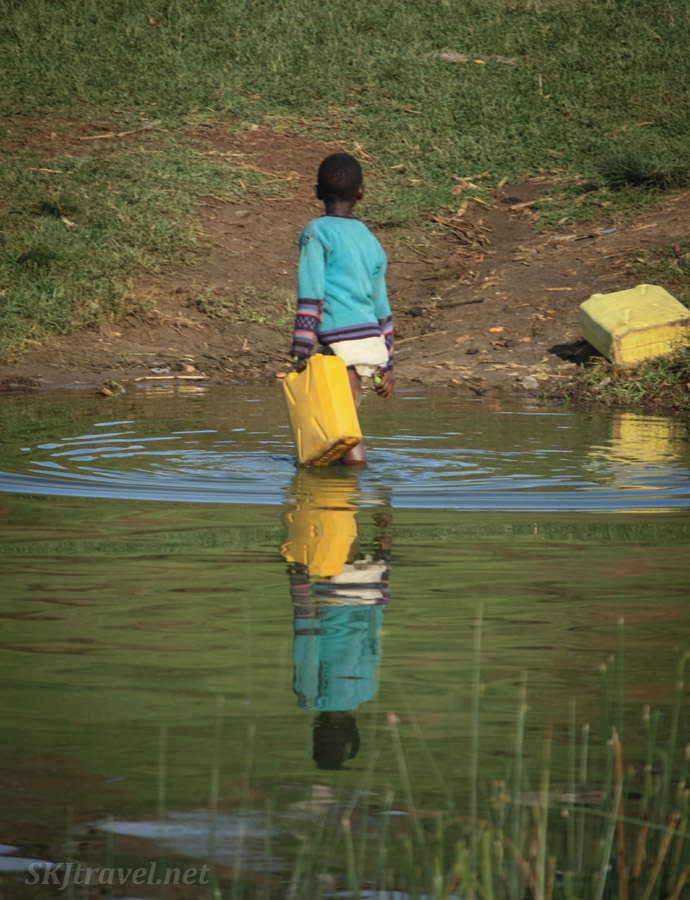 The following day, Jeeves and I did two activities: one I already told you about in the post “Salt and Sex,” about the salt lake. The other was going on a game drive through the park by road. Again, not nearly the quantity or diversity of wildlife as in Murchison Falls, but it was a major score for me. What did I most want to see in the wild? The crowned crane. I did see some at the Crater Lakes in a field, but they were far away and the sighting was brief before they flew off. Right away, two beautiful cranes came into view. I was very excited. The next bird I spotted was a bird we'd learned about in Kruger, South Africa, the saddlebill stork, and I didn’t even know they were here. I was excited when I recognized one. Fred said Ugandans particularly like these birds because their beaks have all the colors of the Uganda flag on them. 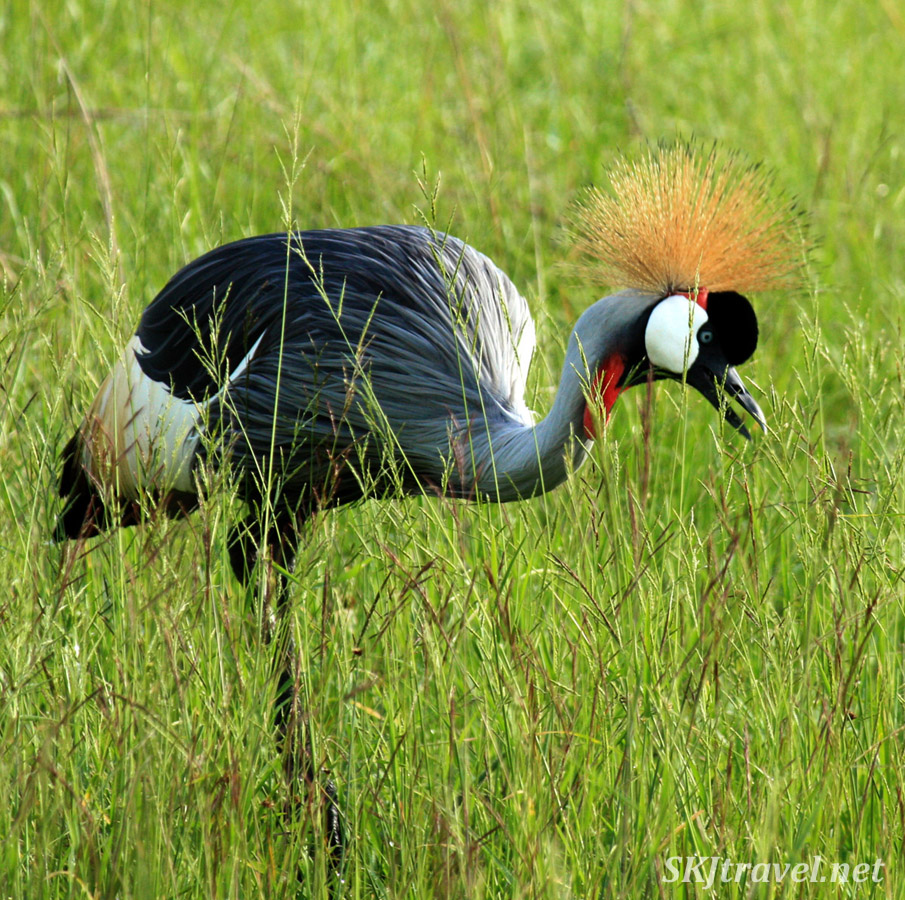 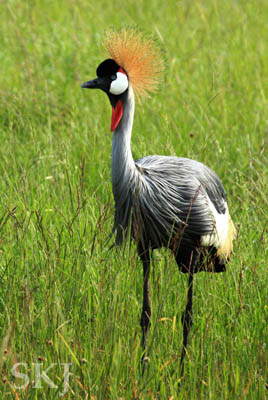 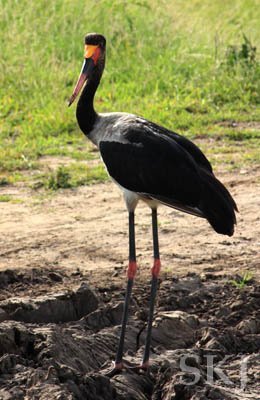 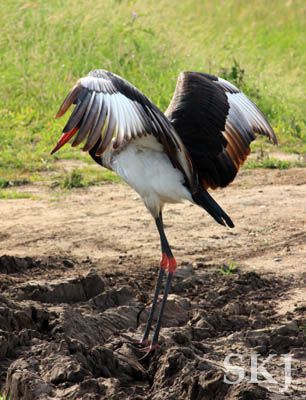 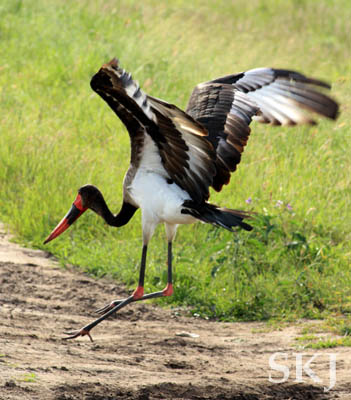 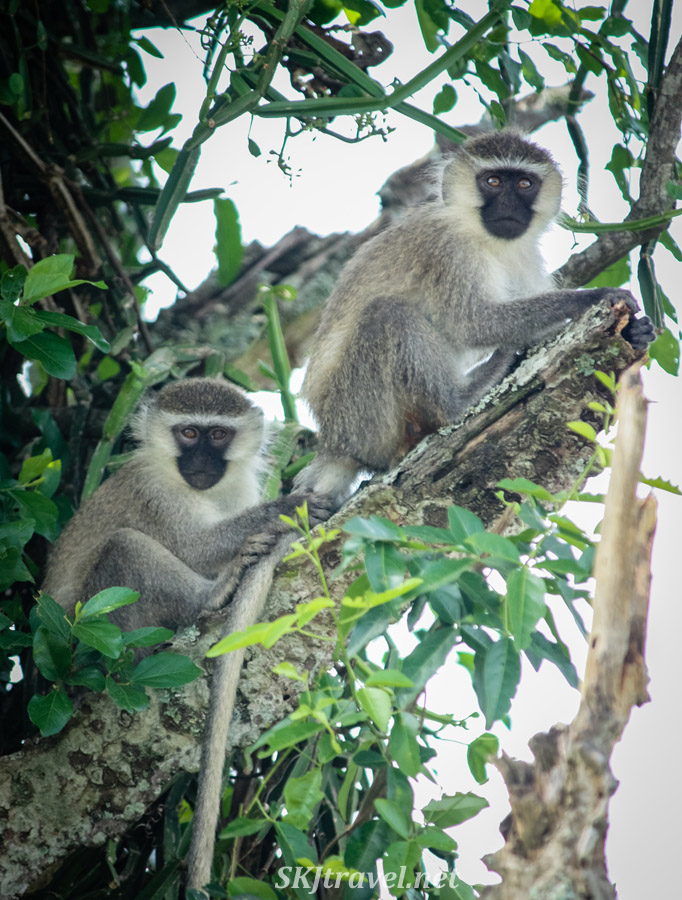 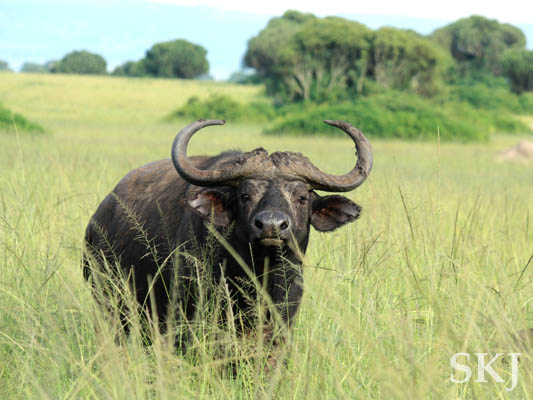 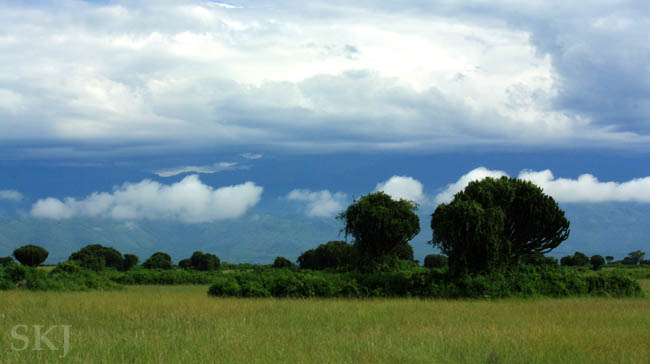 Then we were driving along at a fairly good clip … a little faster than I felt was good for premium game sighting, to be honest … when something caught my eye. “Stop!” I practically yelled.

“Did you see something?” Fred asked.

“I think so, back up.” So we rolled backward until I saw the tall white curve of a big cat’s tail help up in the air. That curve had stood out to me as a form not belonging with the surrounding flora. And not just a big cat, but a leopard! Score! Again! I had been excited about the leopards in the tree in Murchison, but they were only visible in patches among the tree branches. This guy was just sauntering across the field, calm as you please. Nobody was around but me and my guide. Fred was very excited with my sighting. We watched the leopard for probably 10 minutes, leisurely walking along, occasionally we had to back the vehicle up more to keep beside the cat. Imagine my disappointment when I found that I didn’t have my camera settings right for focusing in that condition, so even though I had prime perfect photo op, everything came out blurry. Now imagine how quickly I got over it when I thought about the fact I’d just watched a leopard in silence for 10 minutes. Eventually he crouched down low and kept walking, as though he were half-heartedly stalking something. He disappeared into a stand of tall weeds where we could no longer see him. Just then a safari jeep full of tourists pulled up and we left, completely smug with our secret encounter while those shmucks looked about frantically, wondering what we had been watching. Oh, actually, the shmucks were my Japanese neighbor and friends. Ha ha. This is the best I came up with. Publishing here anyway, just so you don’t doubt my word that I witnessed this feline marvel crossing my path. 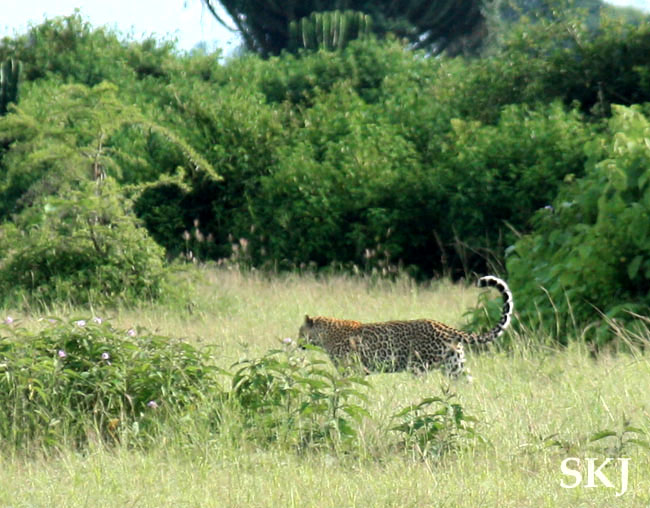 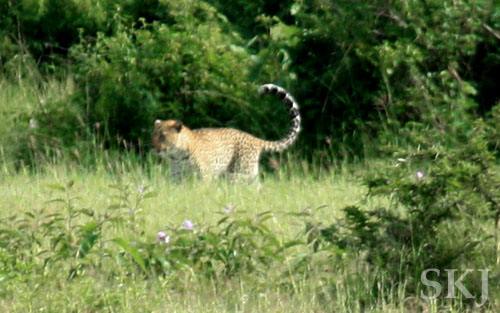 So ends a lovely weekend of luxury and amazing animals.  Thanks, as always, for following along, and thanks for all your comments. Always feel free to contact me with the "contact" button above. Remember to tell your friends, and to subscribe to the blog via the "updates" button for extra info, photos, videos and links not published on the public blog.  :-)