Sunlight glinted off the thin thread of drool spanning his slack lower lip and sweaty black tee-shirt. This will be the opening line to my new short story about a guy in a small town in Poland who drank too much at the pub in the town square…. based on my true-life experiences. This was one of those moments that could have happened anywhere, but it happened here, and I’ll always remember Poland with a small place for this guy who passed out in his chair at his table. (His friend did the same, across the table from him, but rather than nodding his head down gracefully and drooling, his head and whole upper body went on Mr. Toad’s Wild Ride lolling forward and back, side to side. My back was turned to this guy, so Erik was the commentator, narrating for me play by play as this guy’s head rolled around all over the place.) Oh my, I laughed SO hard. 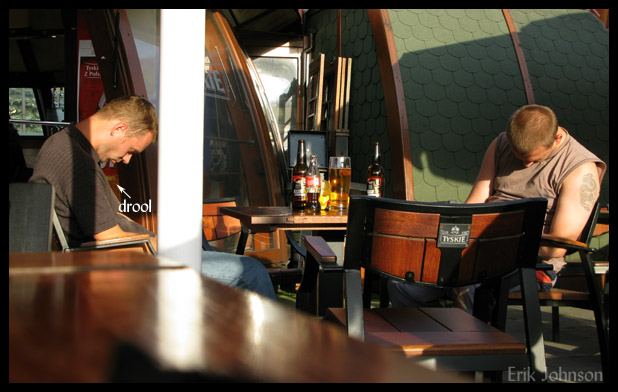 So now I have internet access inside my nifty-difty hostel room in Krakow. I’ve only been here a few hours, but already I can pretty safely say it’s the best hostel we’ve ever stayed in. We happened to arrive on Polish Dinner Night, so we walked right into dinner waiting for us.  Tomorrow we go to vodka tasting night. Apparently it’s quite a mecca here for flavored vodkas. I’m not normally much of a vodka (or any hard liquor) fan, but when in Rome….

Here’s something fun about antique stores in Poland (and presumably elsewhere in Europe but this is the first we’ve seen):  you can buy entire chain-mail suits of armor, and leather chest plates and a wide variety of swords, rapiers, muskets, and the like. A bit cumbersome to carry home though.

Michael Jackson seems to have had a wide presence here in Poland. In Wroclaw, there was a memorial in one of the town squares, erected for some other purpose, but people had highjacked it for a memorial to Michael Jackson in the wake of his recent death, covering it with photos of him and with candles and flowers. There were posters around for M.J. tribute night. And the most random and hilarious thing we saw here in Krakow was a street performer doing a marionette show with puppets of famous pop singers. He had a Michael Jackson marionette doing Billie Jean—moon-walking and doing the signature crotch-grabbing, etc.

The old town square is nice but at times horrifically crowded, and the tourist is accosted by guides wanting to take you on a horse carriage ride. Much like Beijing where they come up and shove a brochure with photographs in your face to show you their tour. The horses are awfully pretty, though, to be sure. The vampires are a nice breed here, as well. I'm told nearly purebred. The international association of exorcists recently chose Poland as their conference location. (for dead real) 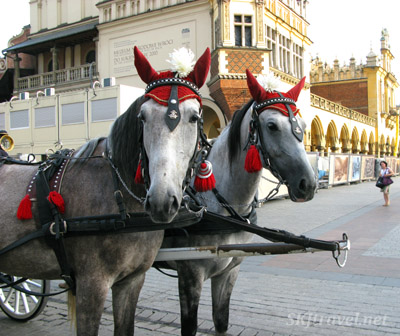 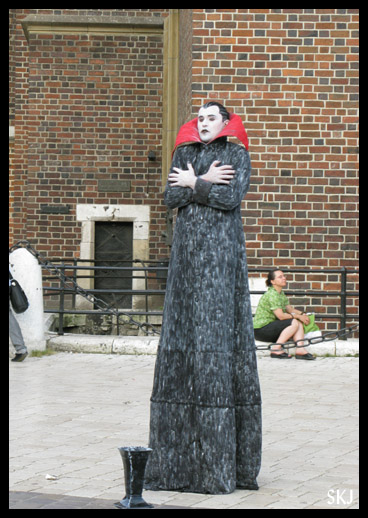 Today we saw a very old college constructed in 15th century and where Copernicus attended for about  4 years in late 1400s. The university in Wroclaw was attended by a number of famous people, including Darwin, Brahms, and numerous others. I just never think of these people in Poland. The place we went to today was very small and quaint, though I suppose in its early day it was sizeable enough. 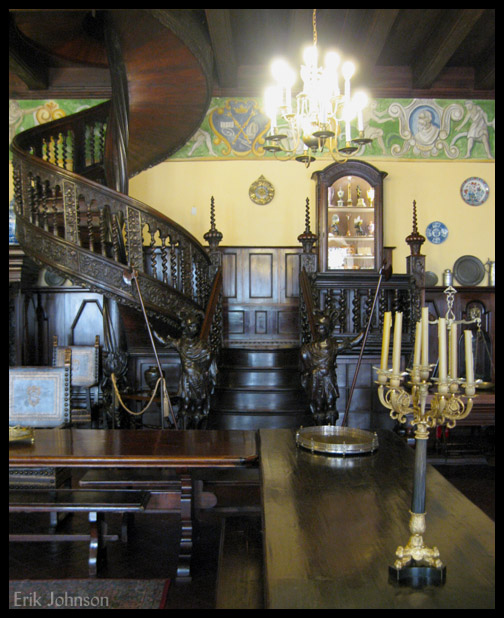 Krakow (of course) has a castle, like any major European city. It was pleasant enough -- I always enjoy castles -- though I can't really name anything that particularly stood out about it comparing it to other ones I've been in. I guess you can consult your guidebook for the interesting lowdown. :-)  It's a nice walk uphill out of the old city center to get to it. 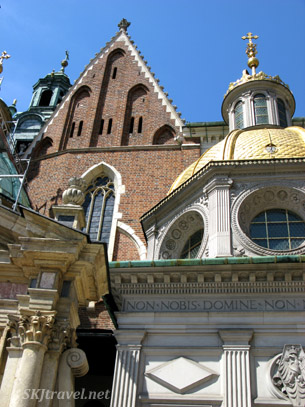 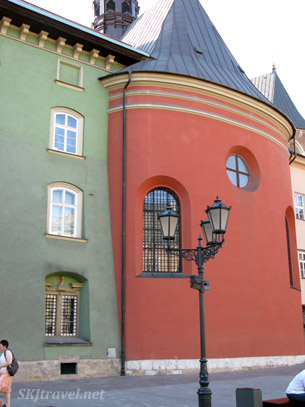 Krakow is a nice city, but honestly, I think I enjoyed Wroclaw more. The heat here I’m sure isn’t helping. But they do have fabulous ice cream (“zmrzlina”) down one particular street off the main square. It’s almost worth ordering ice cream just to get to say the word, "zmrzlina." St. Mary’s church in the main city square looks like any old European cathedral on the outside, but the inside is uniquely stunning in bright blue and red. We actually stumbled into it by accident from a side alley, and didn't realize what we were walking into. I was completely blown away when I looked up around me. 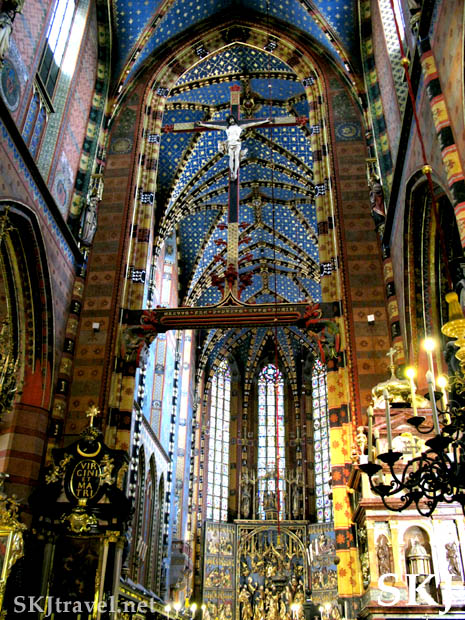 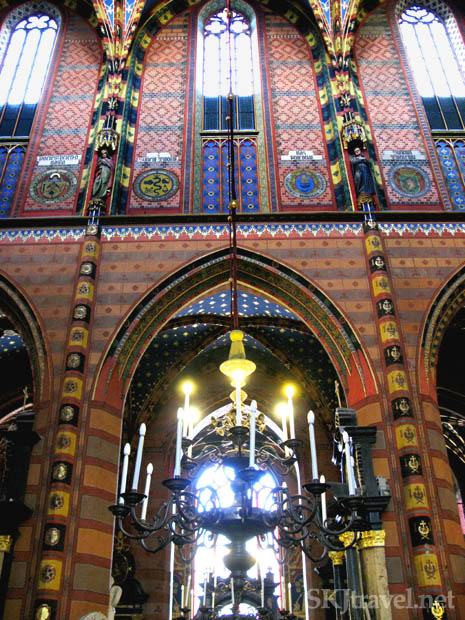 We stepped inside a quaint synagogue more on the outskirts of town. Everyone says we should go to Auschwitz, but we’ve decided against it. I know, I know, a moving experience, they say. But I'm already pretty damn moved just knowing what happened from books and movies. The Schindler factory, however, (depicted in the movie Schindler’s list) is here in the middle of Krakow. But any time you step into a Jewish quarter or synagogue is this area of Europe, you can't help but have ghosts on your shoulder. 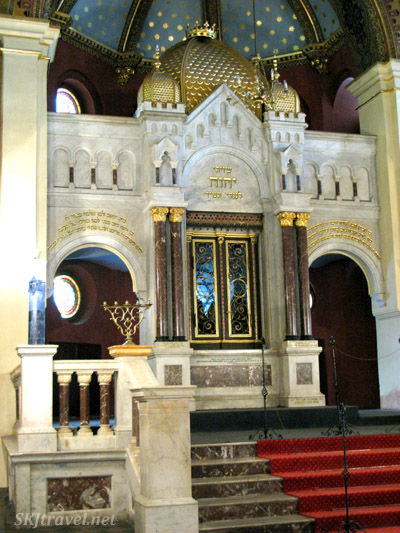 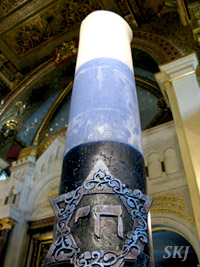 We are waiting out the midday sun in our hostel room right now as I type. Soon to go on a “communism tour” around Krakow. Recommended by the hostel proprietors as something off the beaten track.

I decided to do another load of laundry while waiting here. Time to go retrieve and hang on my handy Rick Steve’s portable clothesline, which I have to tell you, I love this thing. You don’t need clothes-pins with its clever design, and you can stretch between just about anything. Amusing random thing: they have thrift stores here in Krakow that sell clothes by the kilogram -- you weigh your bag at the cash register and pay accordingly.

From an underground bar in Krakow where we heard a song we liked so much we immediately googled it when we got back home and downloaded ... "Horpina." 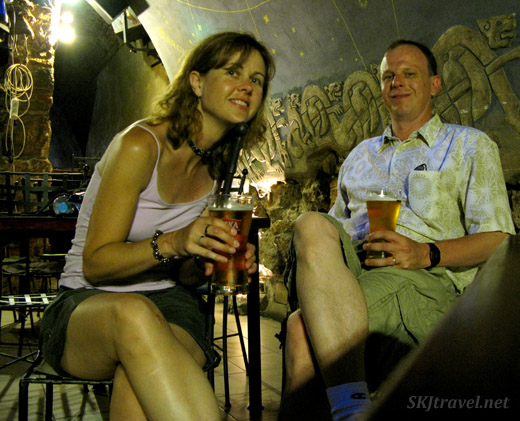 And adding an addendum now about our Communism tour. A teensy tiny car picked us up and the guide took us to a cafe to talk to us about some general aspects of the Communist era, but in particular the place we would visit called Nowa Huta which is now largely abandoned. A common ploy of communist regimes, the government manufactured it as a sort of model city to show the rest of the world how awesome they were and how deliriously happy the citizens/comrades were. (a facade, of course) One thing that can be said about the communist regime in Poland is that they realized that to destroy the churches and synagogues would inspire certain rebellion and revolt, which they decided was better to avoid. So religious institutions survived an unfortunate period of history perfectly in tact. We also stopped at a modern church, something not really found in old town Krakow. 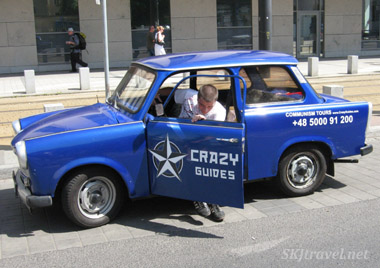 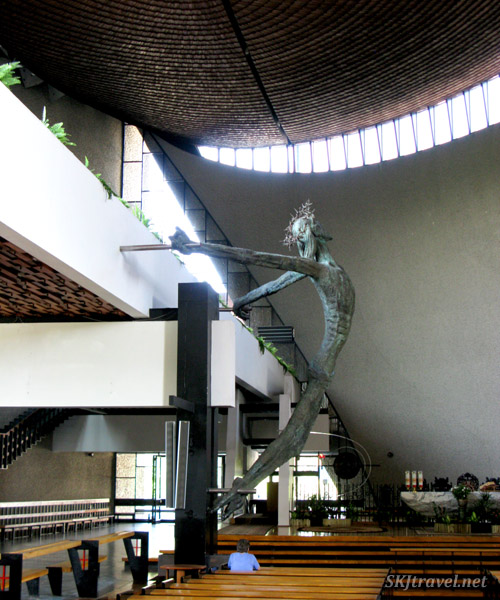 A somewhat funny thing about Nowa Huta is there was originally a huge bronze statue of Lenin. When the communists were ousted, the citizens wanted to get rid of the statue and thought they’d melt it down and reuse the metal. But turns out, it was hollow inside and basically rubbish. So instead they just dragged it outside of town and left it in the weeds. Eventually some eccentric (European, I think) acquired it and it now sits in his private collection, dressed in pink clothes.

OK, now I have internet access inside my nifty-difty hostel room in Krakow. I’ve only been here a few hours, but already I can pretty safely say it’s the best hostel we’ve ever stayed in. We happened to arrive on Polish Dinner Night, so we walked right into dinner waiting for us.  Tomorrow we go to vodka tasting night. Apparently it’s quite a mecca here for flavored vodkas. I’m not normally much of a vodka (or any hard liquor) fan, but when in Rome….

We’ve just briefly forayed in Old Town Krakow. Our hostel has laundry facility, so right now we’re doing some laundry. Plan to see the castle and cathedral this afternoon. Yesterday we did a ruined-castle-hopping drive. Saw three different ruins. Countryside was pastoral and green with rolling hills and many fields of amber grain. The wild fields surrounding the castles were perfectly lovely with gigantically tall flowers and weeds. Very few visitors on the grounds, walked around mostly by ourselves. There are not many activities I enjoy more than exploring ruins in solitude. Gotta go get the wash.