Romping Through Restored Ksars and Surviving the Sahara Desert

You might think that if you've seen one ksar you've seen them all, but this is far from the truth.  Each one has had quite different features architecturally. (We've been to 5 ksar so far before visiting the ones coming up below.) This, of course, is well documented in our approximately 1.2 gazillion photos. Incidentally, we continued to be the only guests at our hotel in Tataouine, our subsequent meals were composed of the leftovers from our first night, which might not sound good, but they were fixed up very yummily and it was wholly satisfactory after a day of sightseeing.  I'm glad they didn't throw all that food out, and it felt more homey ... having leftovers for dinner!

Though I am getting better at navigating the Tunisian keyboard, it is still difficult to compose thoughts and sentences when I have to concentrate so much on just physically typing the words. Since my last dispatch, we saw some more ksour (plural of ksar, though sometimes I forget and say ksars) south of Tataouine. Most of these have been restored, so there was not the adventurous element that came with exploring abandoned ruins, but strolling through these picturesque courtyards was relaxing and interesting. These ksour are built up from the plains rather than into a hillside. They are almost whimsical with their little stairways and doors -- kind of "Dr. Seussian" architecture. The small vaulted rooms were used primarily to store grain. These stacked rooms are called a ghorfa. Many of these were built in the 15th century.

The one below, Ksar Ouled Soltane, was another Star Wars filming location for The Phantom Menace. And there is a delightful snack shop there, where a cold coca-cola tastes delicious on a hot day. 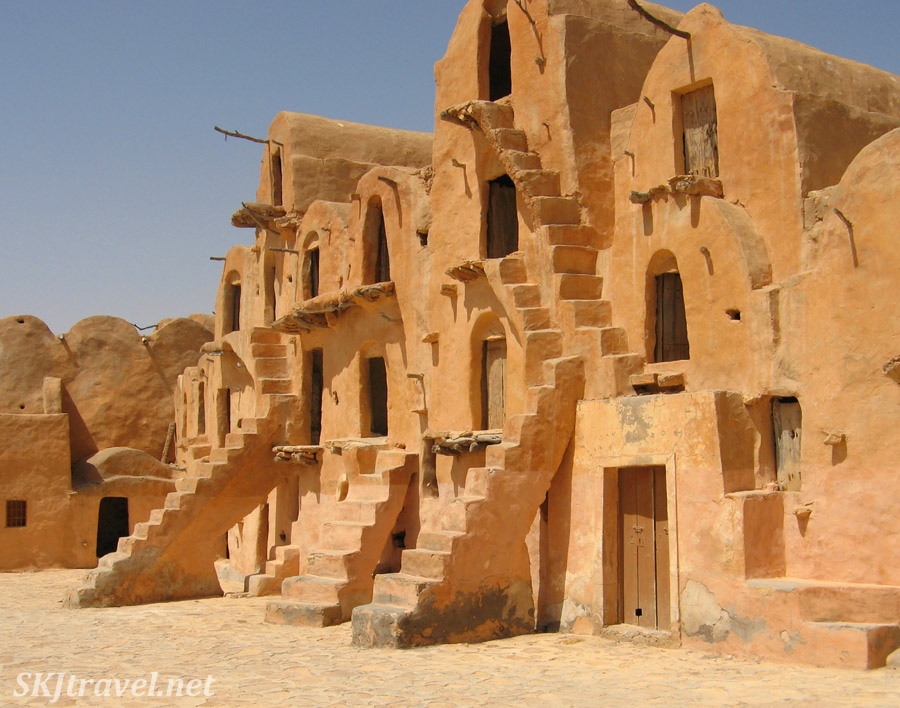 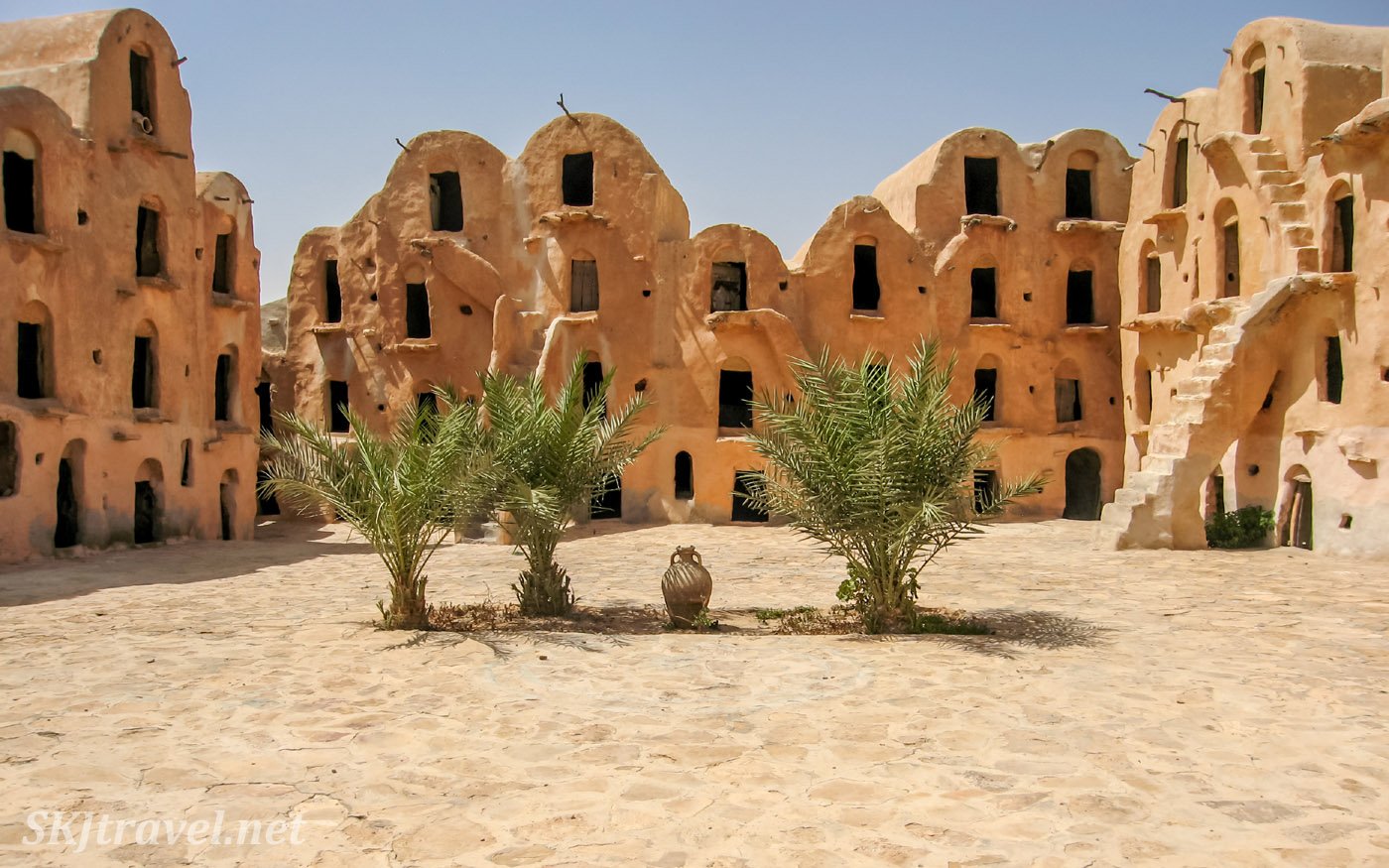 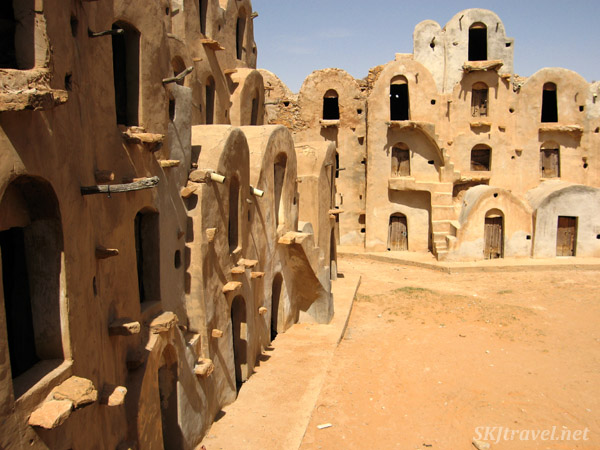 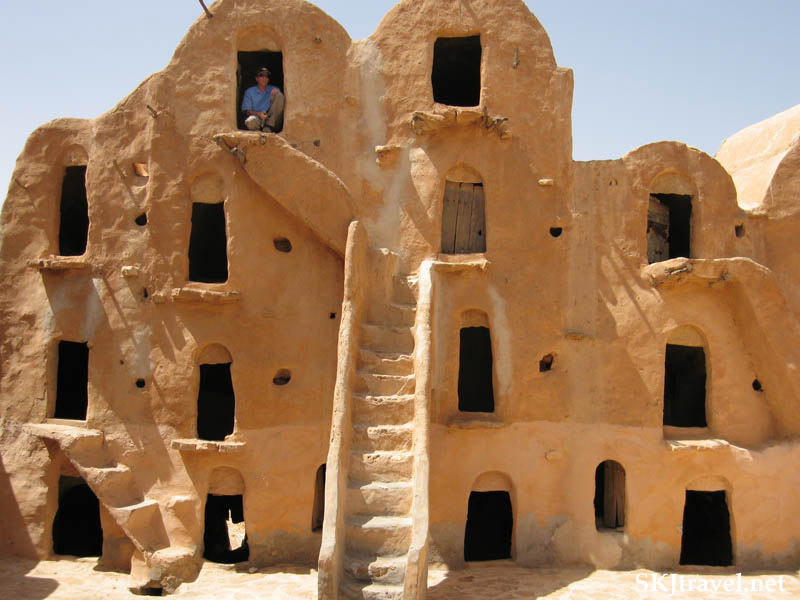 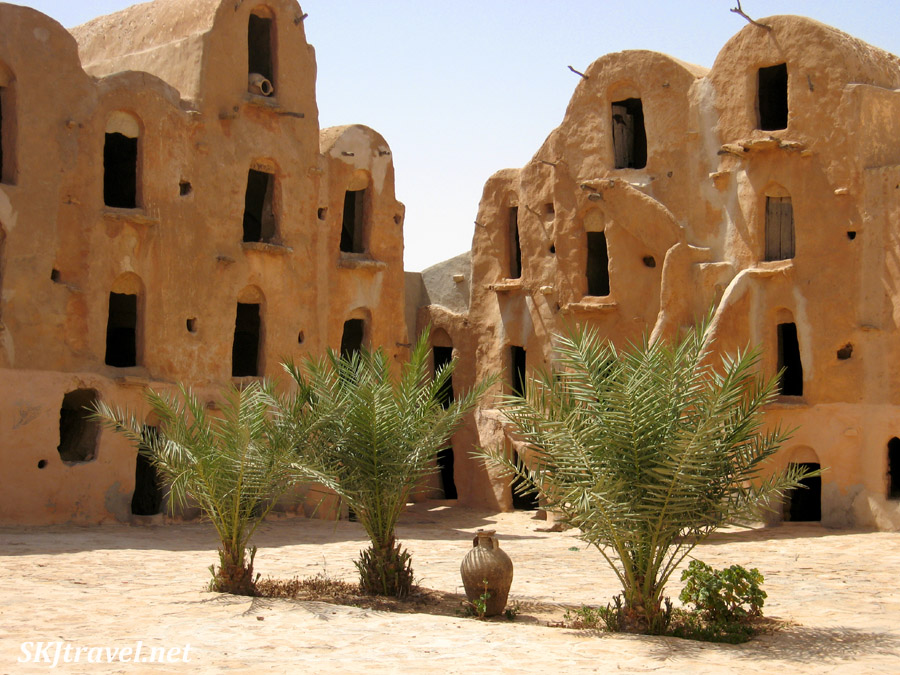 Another one we particularly enjoyed was Ksar Ezzahra. 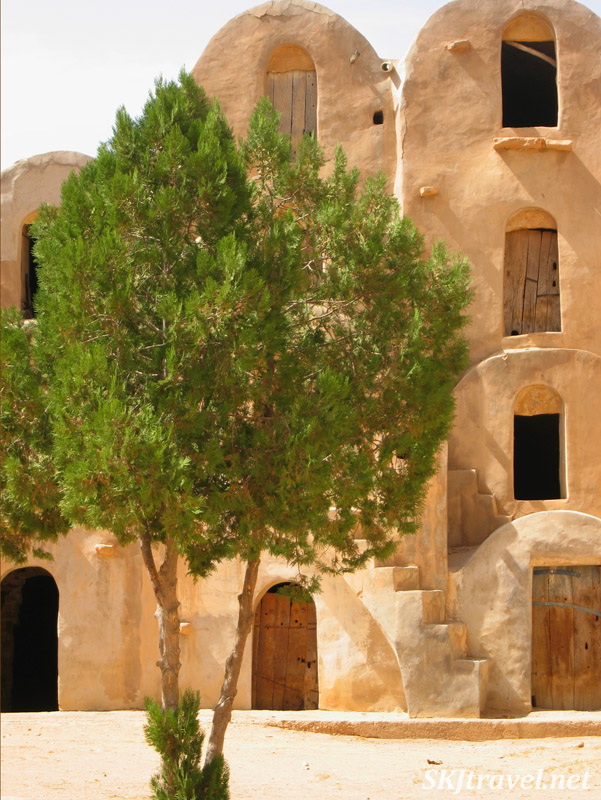 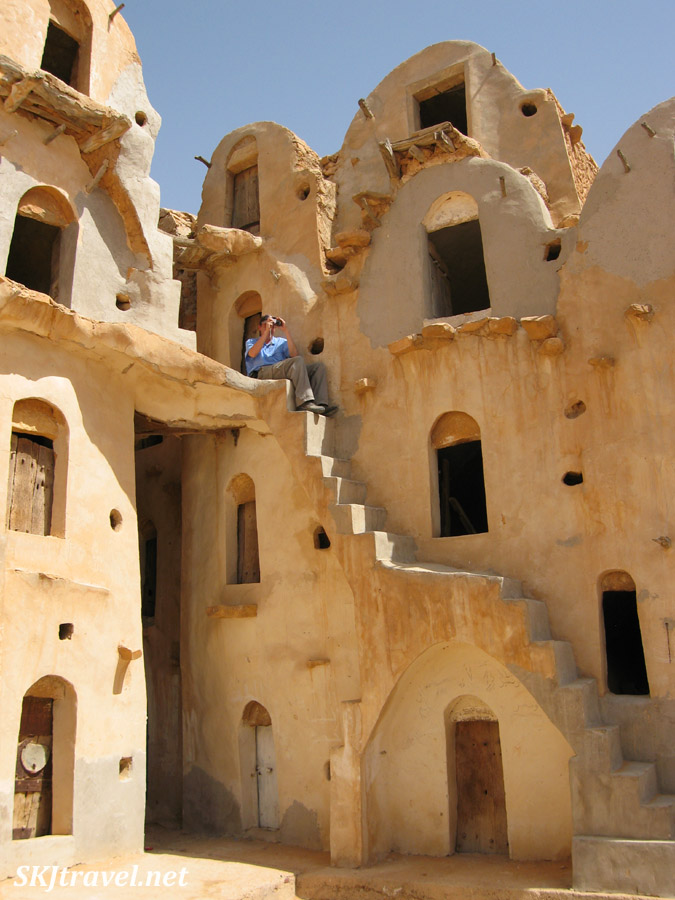 Some of these ksour, by the way, still have people living in the little hovels. We had these places to ourselves to climb around in; maybe a local would be shuffling through the courtyard, but no tourists. So we basically spent the day "ksar hopping" in our trusty truck. 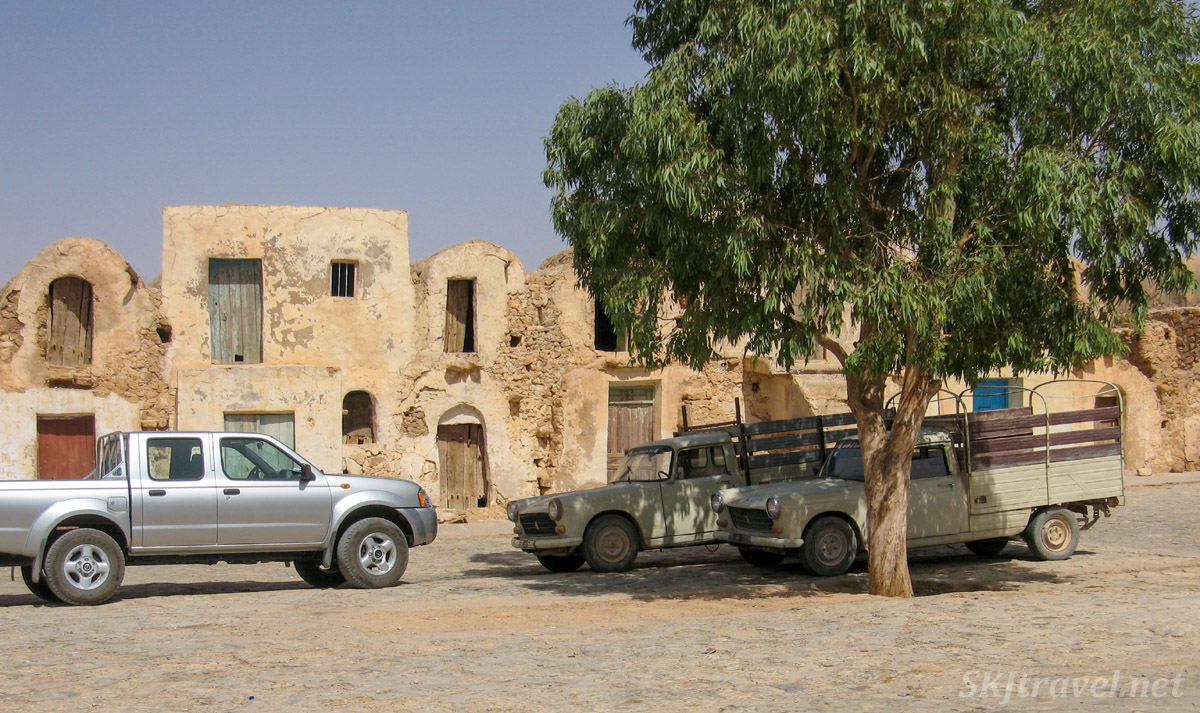 I love the blue doors everywhere ... one of the signature design features of this Mediterranean-influenced country. But I particularly loved it when there was one blue door standing out boldly alone in a ksar complex. We saw this in several of the restored ksars. Just one blue door. It's the magic door, obviously. I want to go inside! 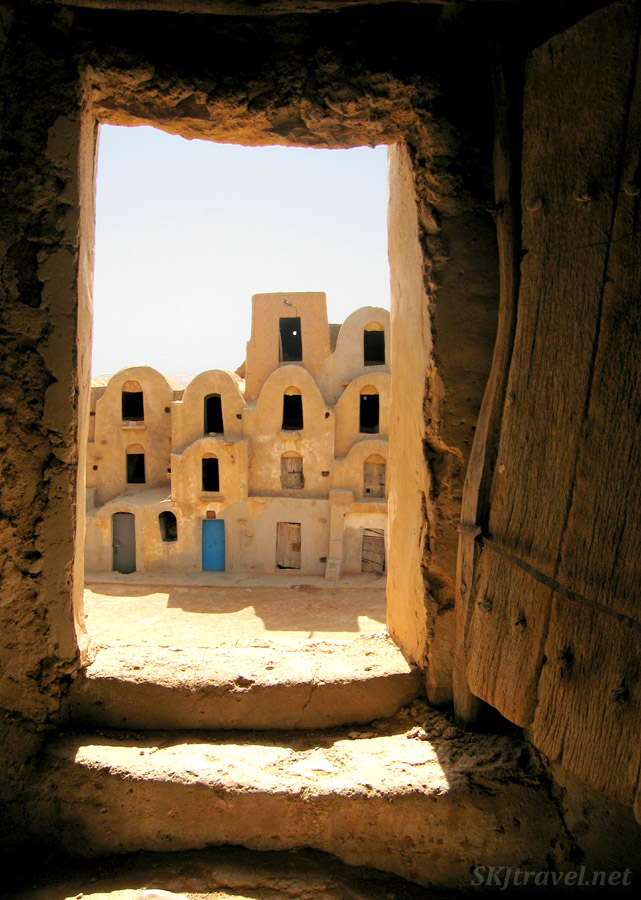 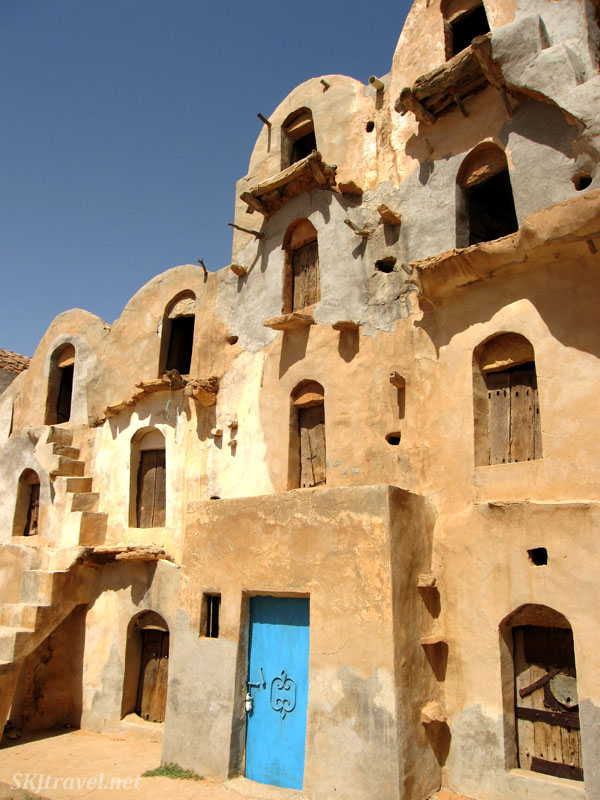 After getting our fill of ksars, we left Tataouine we headed into the desert to a hotel at an oasis on the edge of the Sahara. Decided to take a 4-wheel drive route since we have the truck.  The map showed basically one fork between the turnoff of the sealed road and Ksar Ghilane, our destination. The turn off of the sealed road was marked. Thereafter, I lost count of the forks. I began writing down each fork and the mark on the odometer and which direction we took, in case of needing to backtrack. Twice we had to turn around – once when the road petered out into a little camp with water troughs for sheep/goats, and once when we started down a path and it quickly became obvious that no one had driven down it in ages and there were huge sand dunes in the middle of it. We had our trusty tiny compass, and with that tried to keep on (1) the correct direction according to the map, (2) the road most traveled.

It wasn't too far from the sealed road that we encountered our first sand drifts and had to use low-4 to plow through.  We spent a lot of time on narrow tracks, crossing overland from one track to another when it looked like one was a better option. It was a little nerve wracking driving through the dunes, but Erik was having a pretty grand time.  Finally we hooked up with what was obviously the main road, and shortly before we reached the oasis, a Land Rover came speeding up behind us, passed us, then stopped in the road and the driver got out.  We stopped; he peered in and asked where we were going. Then he asked where our compass was, pointing to the dash where vehicles these days tend to have one in a corner of the rearview mirror. I showed him our tiny compass (came attached to a winter coat Erik bought a few years ago) and he laughed, took it from my hand and showed it to his passengers. He said we were the first people through the area that day, and he was obviously impressed by both our navigation skills with our puny compass and Erik's driving skills making it through all the sand dunes.  This experience inspired my essay, "The Eye of the World."

We ran across this sign which I thought was kind of hilarious. A cafe in the middle nowhere ... no roads or paths to it, just there it is, plunk in the middle of the desert. You can just make out the little lump near the horizon that is the cafe.

After we made it to our hotel (a bunch of air conditioned tents at the edge of the desert), we took a camel ride a short distance into the Sahara. The sand is like cocoa-powder, it's so fine (and infiltrates everywhere). The camels lived up to their reputation as foul-breathed, grumpy and stubborn creatures. Mine was bent on biting Erik's on the butt all the time. 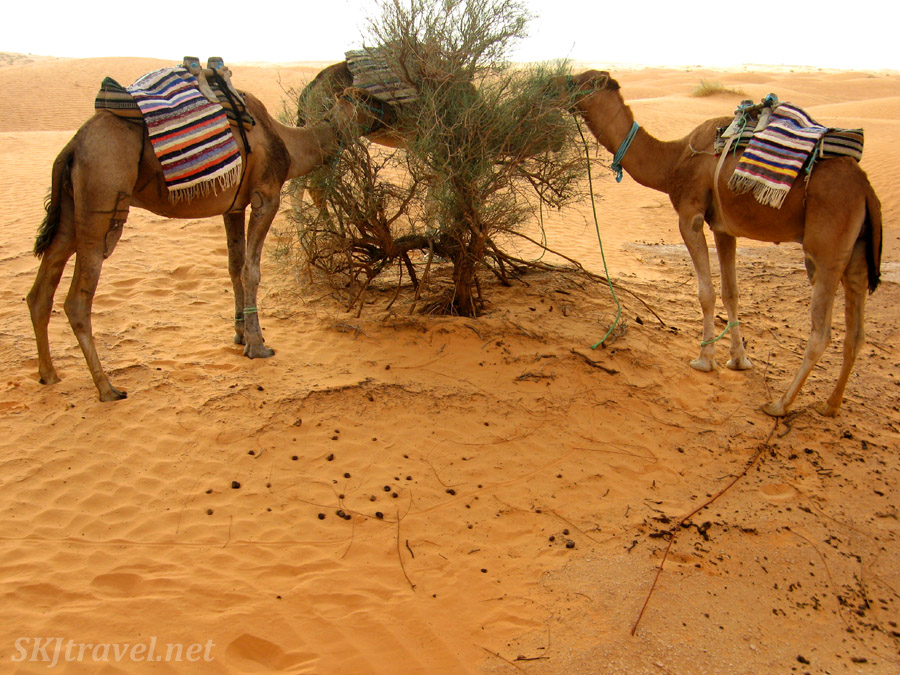 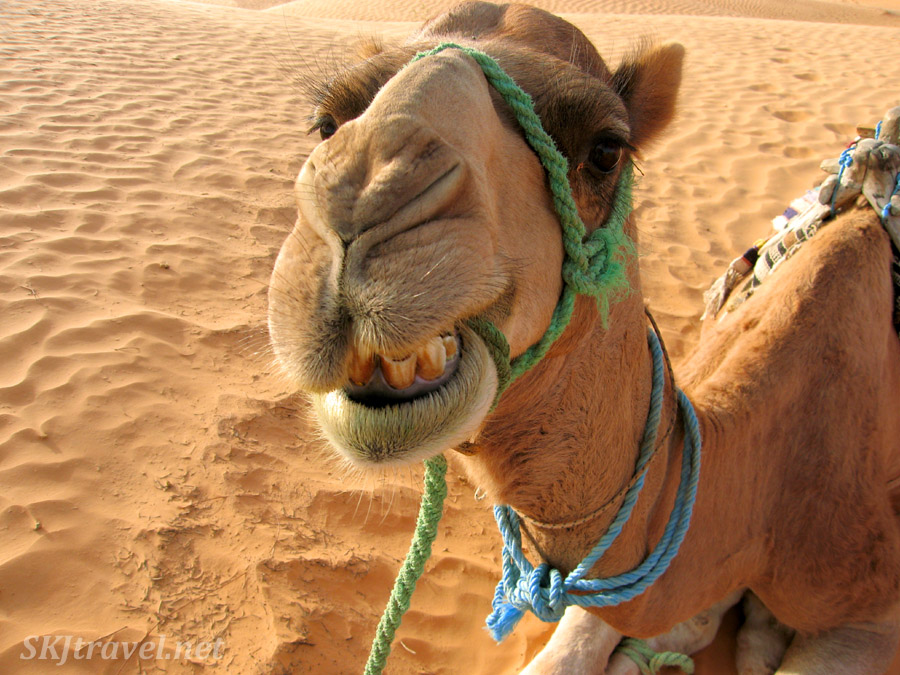 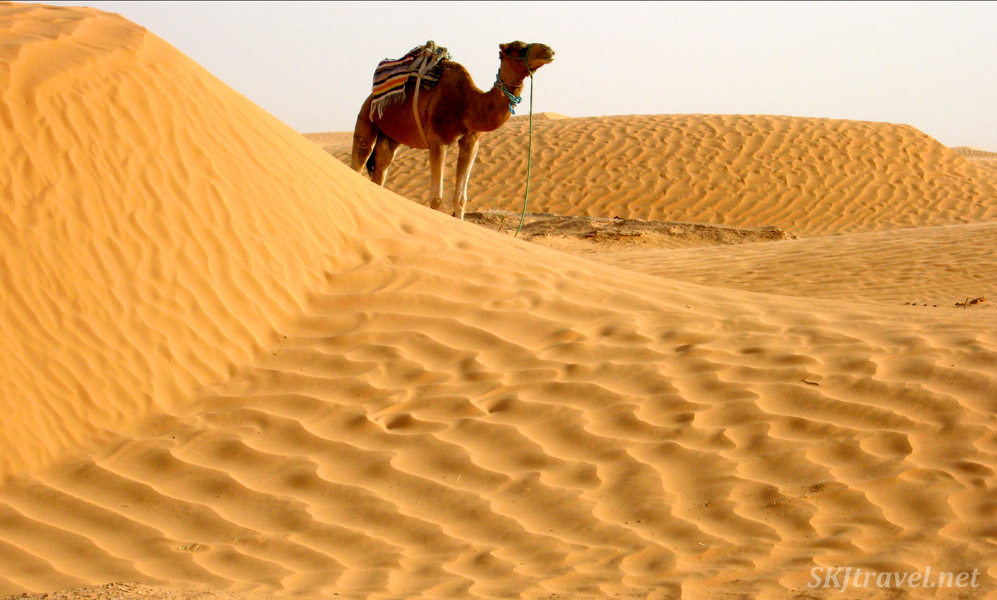 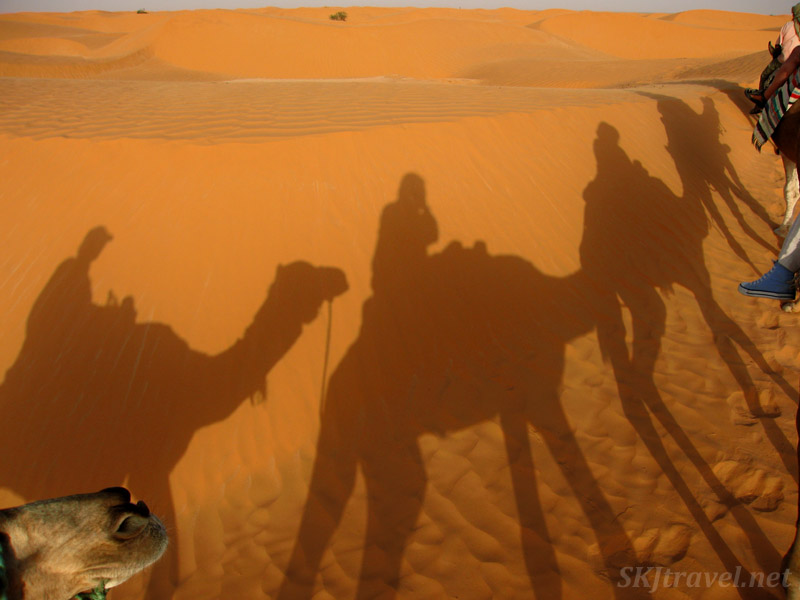 My guidebook said that if you're going to splurge on one accommodation in all of Tunisia, it should be here at Ksar Ghilane for these posh private tents in the oasis. They were pretty fun with private bathrooms and everything in them. Later, after dark, we ventured into the dunes by ourselves to look up at the stars away from the lights of the hotel. Saw several shooting stars. 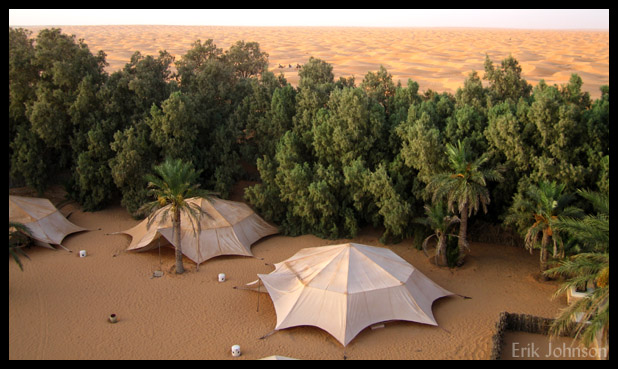 The next day, the little stretch of road between the hotel and the road north to our next  destination was flooded, and it was a challenge to get through. A local man saw us rocking back and forth in a mud pit trying to get out and ran over to ask if he could help. I don’t know how he could have, though he might have had a tractor, we had seen some at a house up the road. But we made it out. During our time navigating the desert, we have really needed our high clearance and low-4 capabilities. Driving to our next destination, the paved road was often drifted with deep sand dunes. It was interesting driving away from the desert, as you can see exactly where the Sahara begins – it is literally a huge wall of sand looming straight up from the flat scrub-brush plains.  You can literally step over a thin line and suddenly be in the Sahara desert, not to emerge again for thousands of miles. Not quite like I expected. Herds of camels on the plains.

This is a shot looking through the windshield -- we are actually on the main paved highway back to Matmata. Can you pick out the road? Look for the little white posts that outline the edge of the road on it's right side. One job that provides steady employment around here is being on a street sweeping crew ... perpetually pushing away the sand that covers the road in new places and creative ways each and every day. 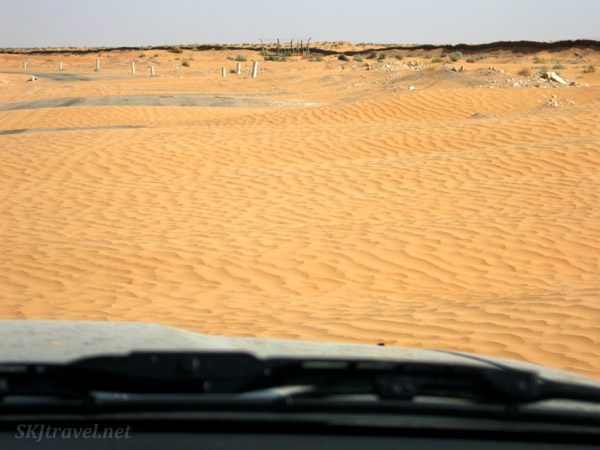 Finally we escaped the sands and found ourselves on more provincial roads. 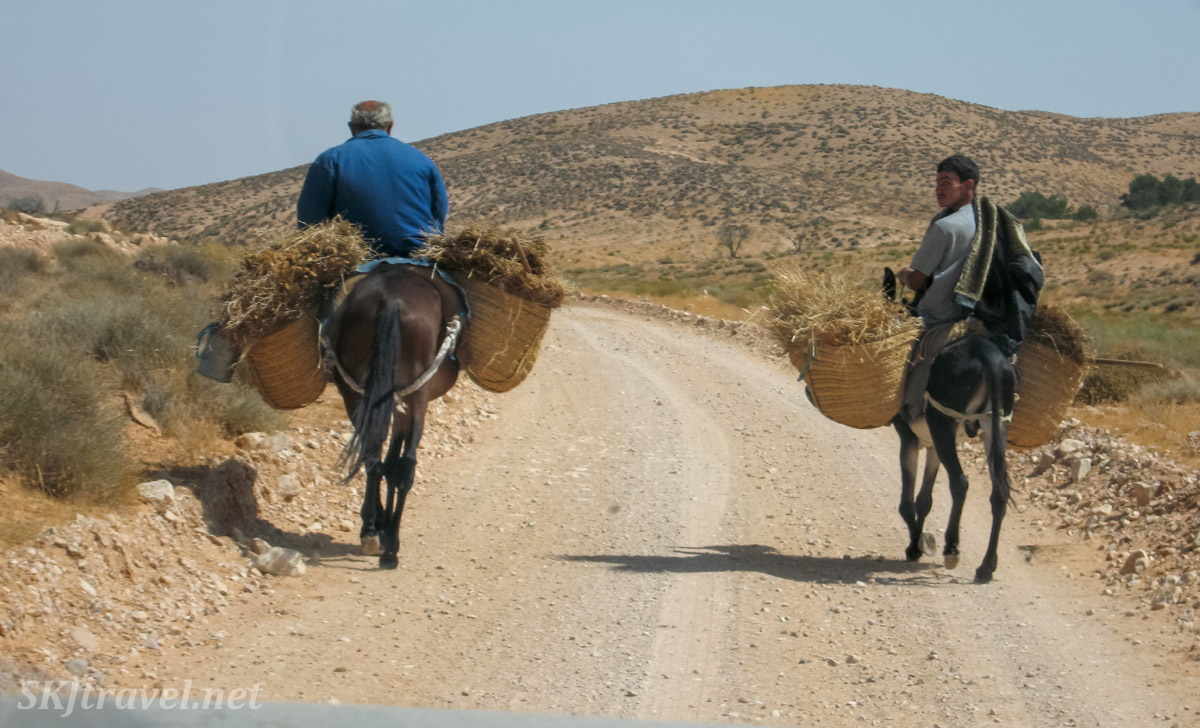 We arrived in Matmata in the afternoon and took a lunch break there. People live in underground homes as a refuge from the harsh desert heat, sometimes referred to as troglodyte homes. And so as I began this post with a photo from a Star Wars filming location, I'll end with another in Matmata, from Episode IV -- the Lars homestead interior. 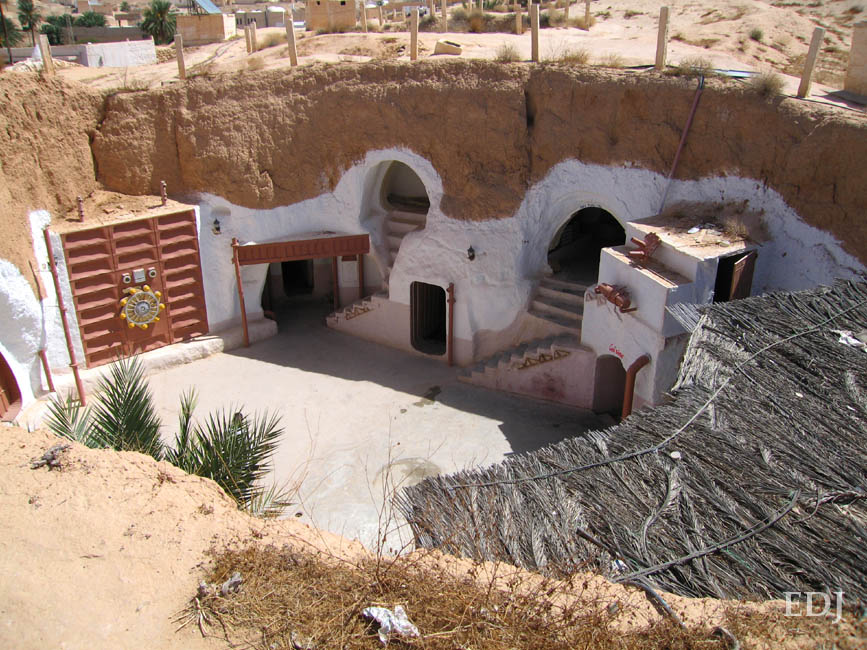 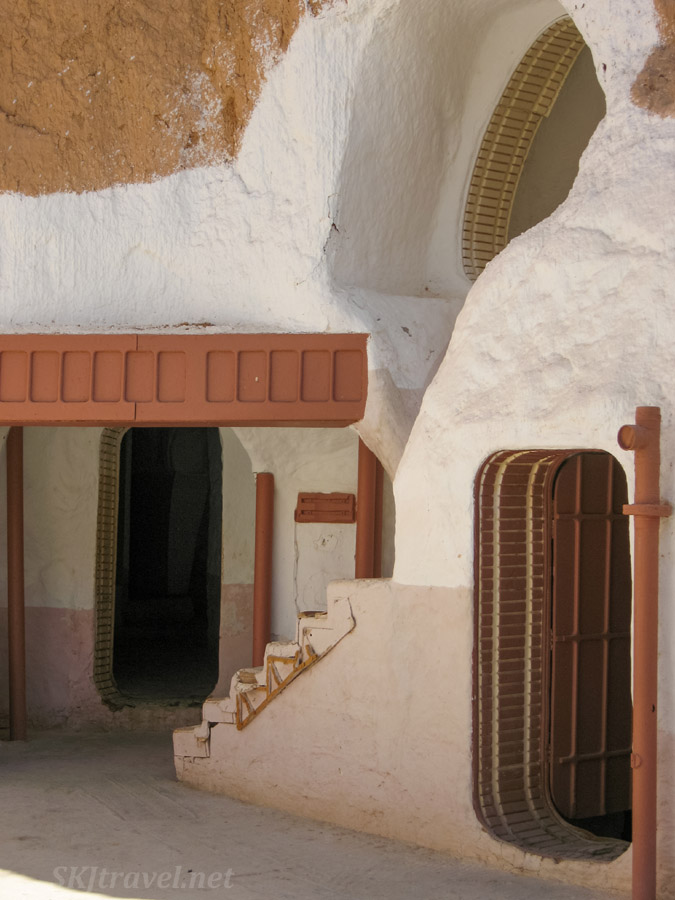 So after seeing a lot of the ruins of the traditional cultures, we move forward in our personal timeline but backward in the historical timeline to ancient Roman ruins in the upcoming posts. :-)

Read more posts about Tunisia
Read my essay, "The Eye of the World," about traveling through the Sahara