So I've just arrived back in Beijing, fairly tired and fairly late at night, so I'm just going to type for a little while.

So the basic situation in the region of our expedition is that pretty much no foreigners ever go there. In Yulin City (pop. 3 million) and Jiaxian City (pop. 150,000) we met with the government officials of those areas, whose governorship includes our subject village, Dang Jia Shan.  Nothing like our expedition has ever come to that area, and so we were treated like the Queen of England herself.  We had several meetings basically as PR, but the officials wanted our advice regarding helping them establish some sort of tourism in their area.  (an enormous task in this extremely poor region of China).  Anyway, food banquets like you wouldn't believe.  And most people in those cities have never seen a foreigner, so anytime we went out in the streets, throngs of people would end up gathered around us.  If we were in a car and stopped on the road with the windows rolled down, people would come up and stick their heads inside the window. Very funny. I recounted one of these instances in a Tuesday Tale, "Road to Jiaxian."

In several instances we were literally mobbed by people.  At a rain festival we were invited to and attended in a small township, Wang Jiabian, we were ushered into a building at the temple to meet the heads of the local government, and people outside were poking holes in the rice paper that serves as the window in order to get a look at us.  A guy with a megaphone had to clear a path for us to be able to walk around the temple.  Mothers shoved babies into our arms, and people grabbed our hands and wouldn't let go until someone else from our group took a picture of them with us.  It was a little absurd.  You can read more about that in the Tuesday Tale, "The Foreigners Are Washing Their Hands."

Anyway...  the village.  Oh the village.  I don't even really know what to say at this point.  Perhaps I just dreamed it all.  It was incredible.  The cave-homes (called yao) that we lived in were so nice.  It was very hot outside, but inside the cave, it was like being in an air-conditioned room. 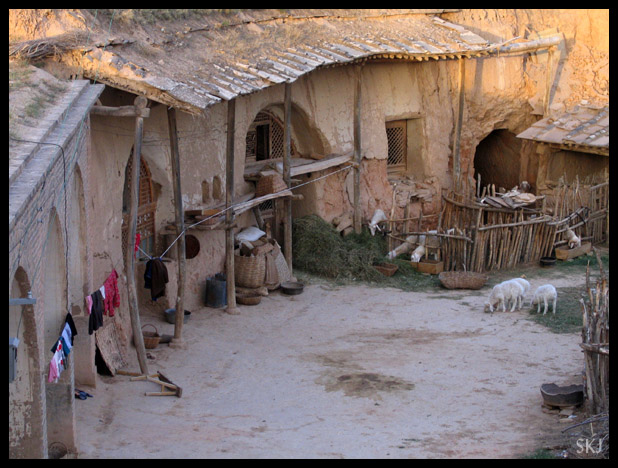 We -- the other volunteers and I -- slept together on a kang, which is just a huge "bed" (a shelf really) that stretches across the entire width of the room and about a third of the depth of the room.  We fit three people with all of their luggage/gear on each kang with tons of room to spare.  These are ingenious beds that are heated in the winter from the cooking stove which is adjacent to it, as a chimney at the far end of the kang pulls the heat and smoke through the underbelly of the kang and out the other end. In the winter, families sit on the kang to eat and pretty much everything else to benefit from the warmth.

There are exactly two signs that there is a "modern" world existing outside the village:  (1) the presence of one bare electric light bulb in each room of the yao, (2) cell phones holstered in the pockets of a few of the villagers.  Otherwise, the daily activities here include working the fields with a hoe, hauling up water from the nearly dried-up spring in tin buckets on a wooden shoulder pole.  The spring, by the way, is down the hill, across the valley, and up into another crevice in the hills.  The villagers pour the water into large ceramic storage jars inside the caves to dish out a little at a time. 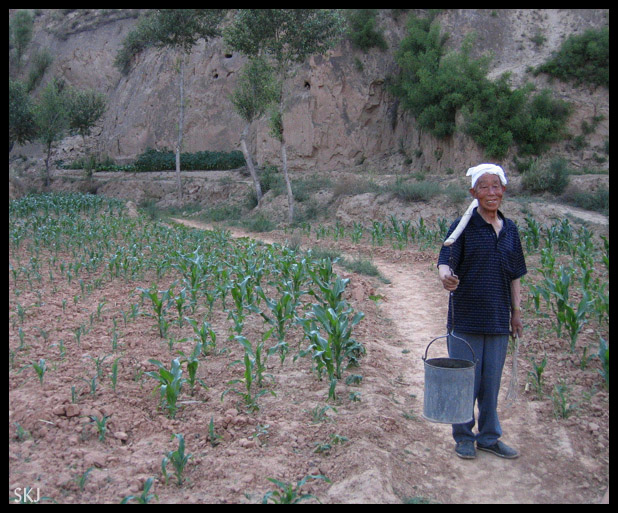 At sunrise they climb the hills and cut alfalfa and wild weeds, bundle it onto their backs and carry it back to feed the sheep and donkeys, which are housed in little stick-fence pens in the courtyards. 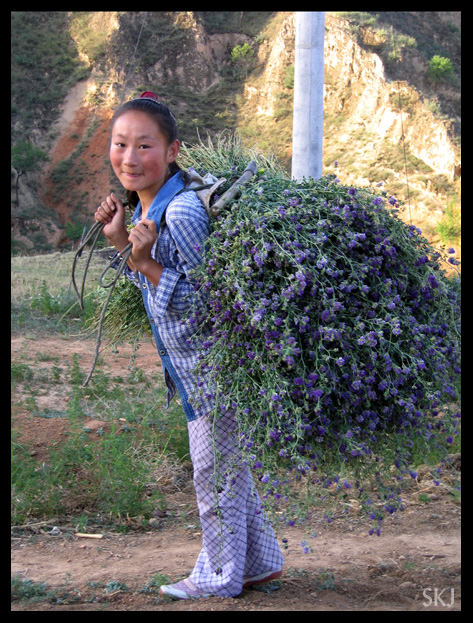 The people who are rich enough to own a donkey grind millet and soybean into flour on the grinding mill by hitching the donkey to the millstone. Otherwise, two women get at either end of the heavy millstone and push the mill around themselves.  (it's extremely difficult to move).  Then with the flour they make various types of breads and noodles.  Steamed bread being the most popular. 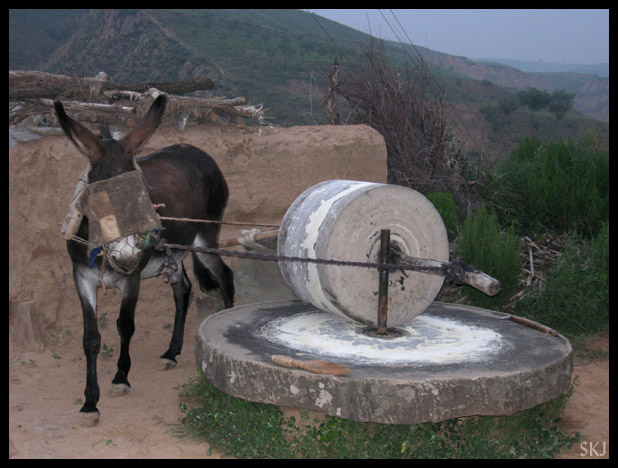 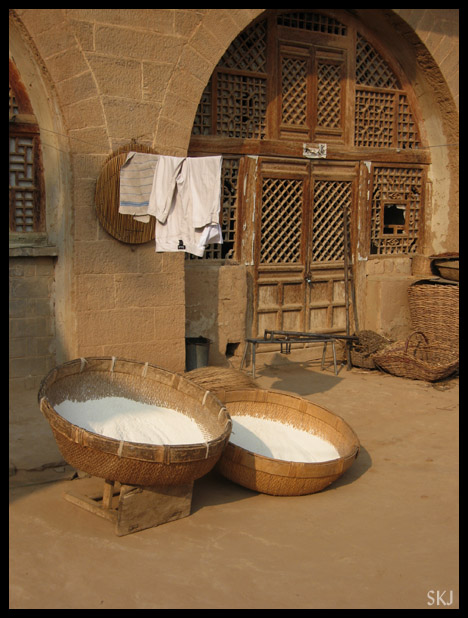 So there's just a brief glimpse of daily life.  Utterly antiquated.  The main thing that we had to work at getting used to is the lack of privacy around the latrine.  The toilets (a simple hole in the ground) for each household are located outside of the courtyard, and most of them have nothing more than a waist-high wall part way around them.  Maybe that wouldn't be so bad, except that they're just out in the open where anybody can walk by.  And we happened to be located at the foot of a small hill where the villagers happened to like to sit and chat.  And being the only foreigners they've ever seen in their lives, they really like to sit around our courtyard and chat.  So basically, we had to learn to use the toilets with a full, live audience.  The villagers seem to think absolutely nothing of this.  At first we would stand up, zip and hurry back to the yao embarrassed with our heads down, but after awhile we learned to take it in stride and just smiled and waved at our audience as we exited.  And they invariably waved back or said hello as casually as if we were just passing each other on the sidewalk.  Kind of funny. 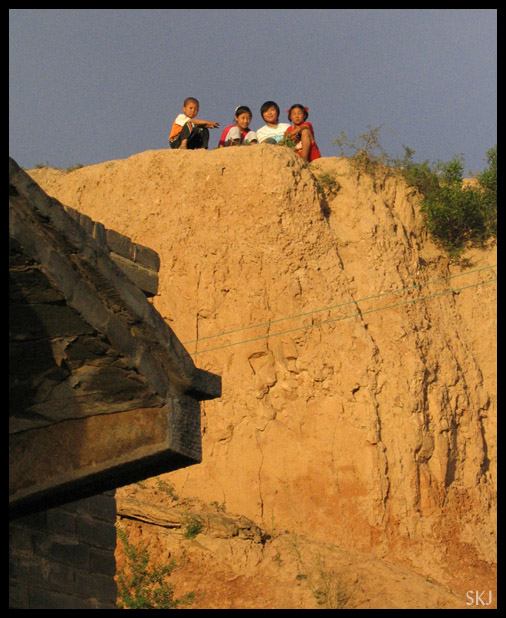 The other thing to adjust to was the degree of hospitality -- we were astounded at the kindness and generosity these villagers showed us.  It makes one teary-eyed to think about it.  This is the village that our principal investigator, Anrong, grew up in.  (Until a few years ago when his niece graduated from high school, he was the only person in 20 years from his village to graduate from high school--and he is a professor at a very prestigious university in Beijing now.)

There is only a primary school grades 1-4 in the village, which right now has 8 terribly cute students in it.  Then to go to middle school and high school, a child must board in other towns, the high school being 60 kilometers away from the village.  Rather than each of us staying with a different family, like the expedition briefing suggested, we volunteers all stayed together in one yao, but Anrong's family took care of feeding us and hauling water up for us from the spring and every tiny little need they could think of.  His mother was always so concerned for us.  They were particularly worried about our pale skin because of the sun.  The things they always pointed out about us foreigners were our pale skin and big noses. 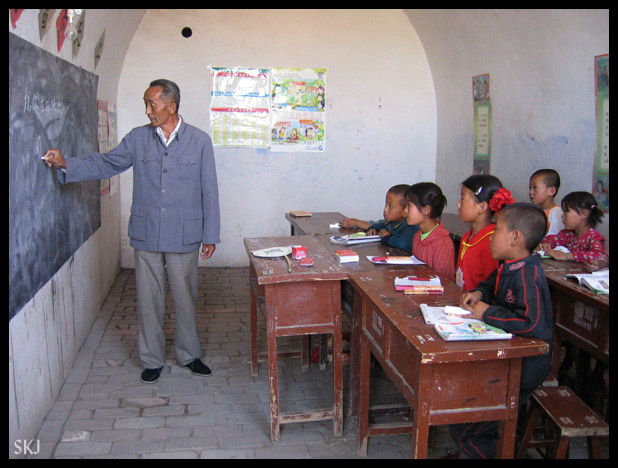 Normally their meals consist of millet soup for breakfast; millet soup and steamed bread, and maybe a vegetable for lunch; and millet soup and steamed bread for dinner.  However, for us, since our team was particularly interested in their non-material culture, such as cooking traditions, they fixed for us over the course of the 2 weeks, all of their special foods that they otherwise only fix once or twice a year. Anrong's parents and older brother were so so so so so nice I can't even tell you.  And the men all have perma-smiles … genuine, soft smiles, always on their faces.  They are the sweetest human beings on the planet.

We were introduced to the local crafts (paper cutting being the biggest and most unique one).  Anrong's aunt is a paper cutter – she is about 80 now and has bound feet. It's fascinating to look at them, particularly when she is sitting next another woman and you can compare their foot sizes. They still hurt her even now; I saw her crawling around the courtyard on her hands and knees.  She is a character.  Please learn more about this amazing woman through the essay I wrote about her, "Vignette of an Old Woman." 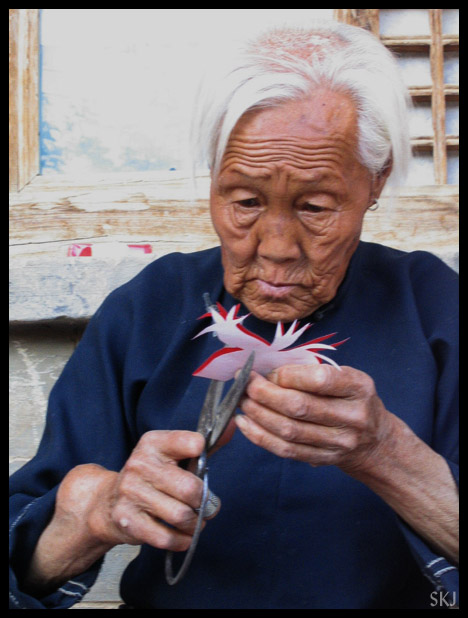 So golly, they were the most brilliant two weeks of my life.  I really can't type anymore, my one hand is really hurting me, I must have strained it somehow.  But there you have a brief introduction to what I've been doing.  Perhaps I will find energy to type more tomorrow.  I have not showered in five days, so I'm going to go do that before I turn in to bed.  (The villagers don't have the luxury of a shower in their land of little water.)