Here are a few things one has to love about China and its countrymen. For if you didn't love them, you would spend too much time being exasperated.  (1) how everybody sees you pointing your camera at something or sees you reading a plaque of information and walks right in front of you anyway; walks, in fact, and stares into your camera while passing within 8 inches of the lens.  (2) how despite profuse signage of a hand with a red "x" over it decorating museum pieces, to the point of distraction, everyone walks by and rubs their hands all over the thousand-year-old pieces. (laser technology appears not to have reached museums here, oh which makes me think of (3) how brilliantly lit all the museum exhibits are.  And by lit, I mean by one's own flashlight, which you need in order to properly view the pieces.  Do they think we're all cats with night vision?  It's apparently OK to touch the pieces, just not to look at them. (4) how squatting over a hole in the ground isn't uncomfortable enough in public restrooms; half of them also lack doors so that everyone passing by can see you squatting over a hole in the ground.  (5) how there are no escalators in the train station, where people are lugging around all kinds of baggage, and little 10-year-old British kids are trying to manage their huge suitcase down the steps crying "mummy! mummy! I can't do it!"  (6) how everyone is hawking phlegm all the time, and how that's the one thing that for some reason makes me gag when I hear/see someone do it [OK, that one is a little sarcastic on the "loving" it]  (7) how men walk around with their shirts pulled up over their pecks and stuffed under their armpits, like some make-shift sports-bra.

So yesterday I spent the afternoon in the Fragrant Hills, in the west of Beijing.  A nice wooded area with a few ruins.  I rode a chairlift to the top of the mountain, from where I got a view of the entire city of Beijing.  It was funny to come from the most remote, sparsely populated corner of China, from a village of 138 people, to the spidery sprawl of humanity 12 million strong.  This city is so gargantuan!  It disappears into the smog.  But the fragrant hills are indeed fragrant with shrubs in bloom with a profusion of yellow and purple flowers.  Something that cracks me up, is the Chinese fascination with yelling at the top of their lungs from mountain tops.  Somehow they just can't take the silence or something, or they like to hear their own voice ride alone in the air, above their 1.3 billion comrades. ?  But I experienced this today, and also along the Great Wall and also at Mt Huashan.  Traditional Chinese paintings have such lovely scenes of serenity, of isolated beauty in the mountains, by rivers and ponds, etc.  One gets the sense that they appreciate a sense of tranquility.  But apparently shouting at the top of their lungs is what many of them see as the way to experience nature. Well, each to their own, I guess.

From the chairlift here is looking down on the centerpiece pagoda. As with many retreats in and near Beijing, the artistically appreciative Qianlong Emporer of the mid/late 1700s built a lot of the gardens and pavilions. Sadly, many were destroyed later by forces from the Western hemisphere. But this impressively tall pagoda was spared. 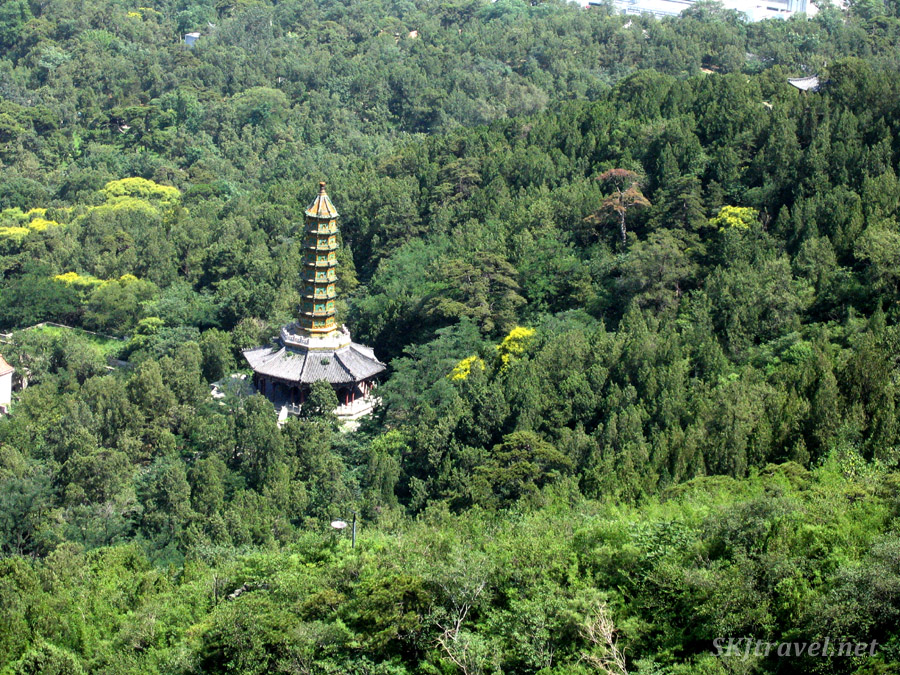 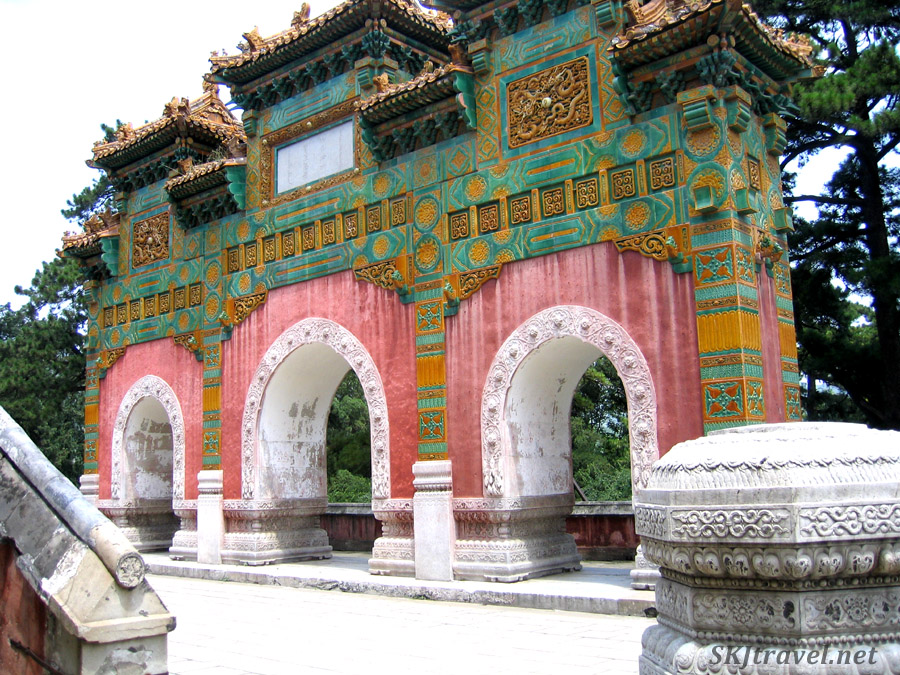 A self-timer shot at one of the gardens in the Fragrant Hills. Just to make sure I was really there. :) Taken just before the taxi ride from hell. 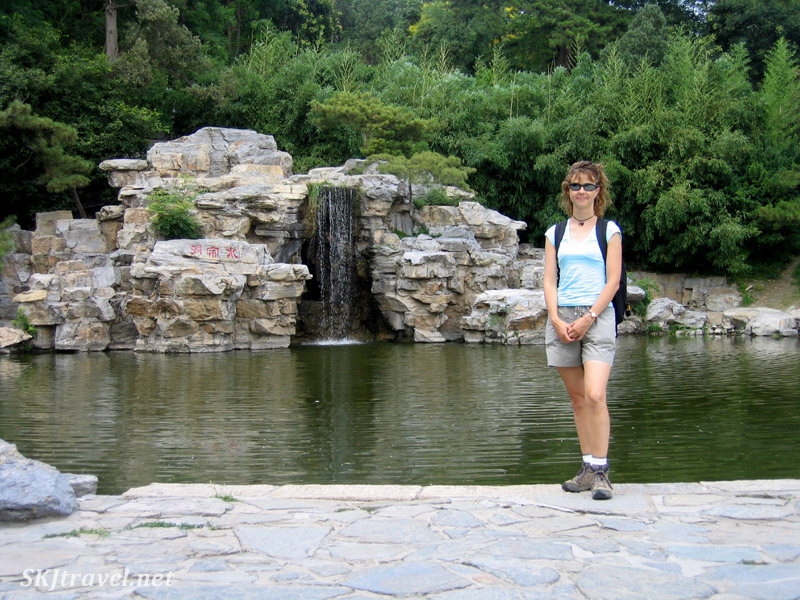 For those of you who perceive laws of conservation in the world, some of the last month's bliss was balanced out by the godawful experience of being stuck in traffic in a taxicab with a driver who didn't speak English as nausea descended and overtook me. Excerpted from an article I wrote for TrekWorld, here is a summary (please see TrekWorld for the full article):

[I was in a taxi cab in the middle of Beijing. Six lanes of bumper-to-bumper traffic going one way. We were in lane three, the dead middle. Nausea began overtaking me about 20 minutes into the 45-minute cab ride I had secured across town. I began slumping in my seat, my arms wrapped around my stomach. Then my head flopped against the window. I had taken Mandarin lessons to get myself around and fed, but my skills were basic. I tried to get the cab driver to pull over, to no avail. I curled into a fetal position, but he seemed unconcerned, if puzzled. I begged to pull over, but he was focused on the address that I’d originally given him. He said, “We’re not there yet!”

“But there’s nothing here.”

Ironically, during this trip, he was listening to a cassette tape of a basic English language course. I gave up trying to talk in Chinese, afraid the next time I opened my mouth something besides words would come out. I stayed curled in a ball and watched the enormous city creep by.

Sweet mercy finally pulled us into a parking lot and I got out, shoved some money in the cabby’s hand, ran to the nearest manicured topiary bush and barfed. This was Beijing, there were people everywhere, but no one seemed to notice, and I was relieved to feel incognito despite exhibiting such poor manners. After a few more barf-oriented mishaps, I finally made it back to my hostel. Fortunately, I’d ordered a single room with en suite bathroom. For the next eight hours I huddled over my toilet inside the bathroom where the sign on the door read, “Please do not drink the water in the toilet.”]

Well, it was about 2:00 pm the following day before I was able to get around after the night's wretchedness.  But I had a nice day once I got out.  I met a fellow volunteer who was in Beijing now too, and my friend Linda, who is the penpal of a friend back home (whom I also met on my first stay in Beijing) for tea at a traditional  tea house.  My companion wanted a snack, so we sat in the dining room rather than the little individual tea rooms, but it was still very nice.  There was live music the whole time with Chinese instruments I don't know the names of in English.

And the tea was so neat.  Each of us had a different kind of flower tea.  They bring out a little round ball about the size one uses for ball-and-jacks (am I dating myself?).  They pour some hot water into the glass, swish it around, pour it out, and pour more in to fill the glass about 1/3 full.  Then they drop in the ball.  I figured it was just going to break apart into some tea leaves or something.  But after a time, the ball opens up, the outer part peels back and a beautiful flower blooms inside the tea cup.  It was very surprising and neato-frito.  Then another guy comes by after about 10 minutes and fills the cup the rest of the way to the top.  The spout on his tea pot is about 3 feet long.  And he does all kinds of kooky things with it ... holding the pot behind his neck and bending over so the spout comes up over his head as he pours.  Or if someone had an actual tea cup (rather than a glass) he would put the cup on his foot, holding it up with a bent knee and pour from the teapot sitting on his opposite shoulder. 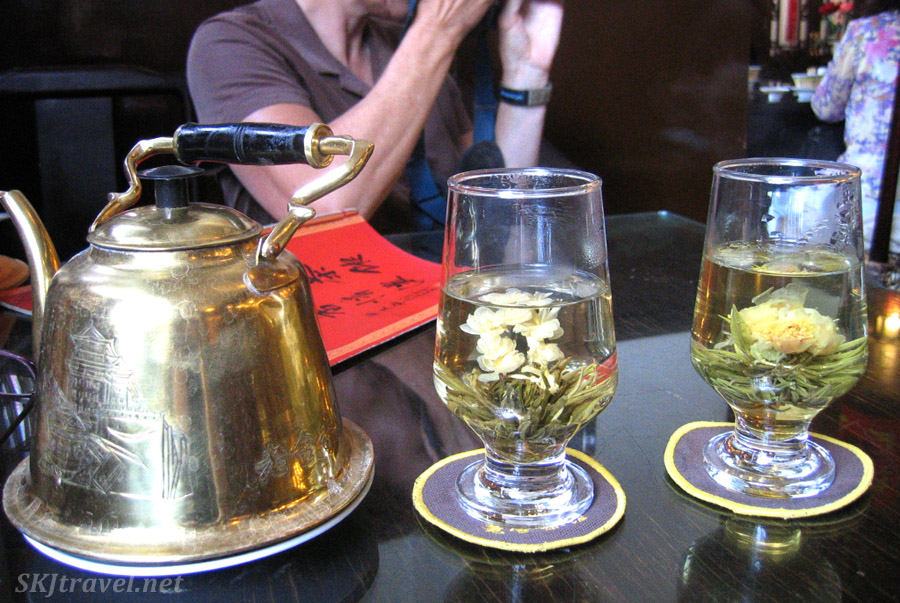 Then Linda and I went shopping for a bit at the Oriental Plaza. What the heck am I doing shopping when I have no room to carry anything home? you ask.  "I don't know," I reply. My actions mystify even myself sometimes.

Then the fun continued as I went in the evening to see the Chinese acrobat show.  To try and describe the feats in prose would be tedious, so I won't, but the write-up in the Beijing guide book about acrobatics said something along the lines of "slack-jawed entertainment of the highest order."  It was very impressive.  And despite the absolutely stifling heat outside, even after dark, I went for a stroll to the back lakes after I got home.  It's pretty at night with the shores all lit up and little boats paddling through the water with lanterns on them.

So assuming I don't miss my plane or something tomorrow, I have come to the end of my adventures. The trip home is one of those funny ones where I will arrive in San Francisco several hours before I left Beijing.  I'll get to Colorado 2 hours after I left Beijing.  Anyway, thanks for following my adventures. Zaijian! Here is a last look at my sweet hutong where I stayed during all my time in Beijing. 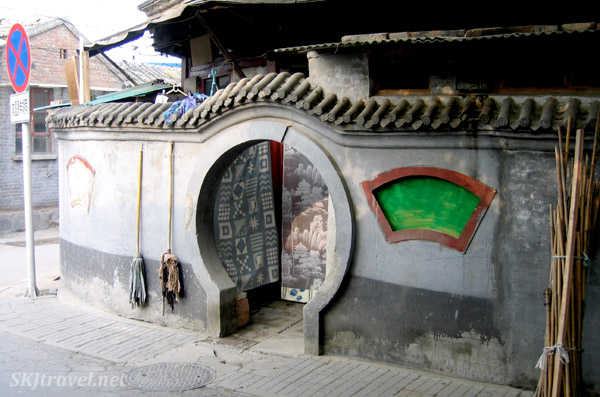