Remedies from the Road

Here are a few various remedies for sickness or injury that I've learned from locals while traveling abroad. Simple, traditional remedies can be surprisingly efficacious.

Honey for burns. The single best cure I've learned is to put honey on severe burns. While I was working at the UWEC in Uganda making porridge for the chimpanzees, one day I stupidly added the flour directly to the boiling water rather than first mixing into a thin gruel with tap water. The flour dropped in and made a terrifically dramatic splash. In seconds, boiling water had soaked my midriff. It took me a moment to have the sense to lift my shirt up so the hot water wouldn’t continue to be pressed against my skin. By then I had a large bright red patch and searing pain across my stomach. I was so embarrassed by my stupidity with the flour, I first determined to finish the porridge before seeking any treatment. There wasn’t even any ice or cold water available, so I just left my shirt rolled up and kept working. I ladled out all the clumps of flour from the boiling water and made a new flour mixture to pour in. Just as I’d finished that, a co-worker walked in, saw me standing with my shirt uplifted, and I explained about the boiling water. He immediately retrieved a jar of dark honey from the top of the refrigerator and applied it to the burn. Very quickly the pain subsided to a significant degree. For the next few hours, I reapplied the honey several times each time the pain returned, and not only did it quell the pain, but by the next day, there was hardly even a mark on my skin. I was thoroughly impressed. Another time, one of the chimps, Aluma, had acquired a wound on his neck … it looked like a deep scratch from another chimp’s fingernails … and the keepers swabbed it with that same honey.

Just to reinforce the awesomeness of honey, another time while traveling I was ordered by some less-than-nice girls to tend a fire. I didn't realize a log I went to pick up was already on fire on the bottom. So I accidentally pressed my right index finger into red hot coal by picking up the log. I was on a photo safari, so injuring my "trigger finger" was especially a bummer. But actually at the time, the pain mostly overwhelmed any other thought. Fortunately the guide had some honey in his kitchen kit -- remembering Uganda, I asked if he had any. Again, over the next couple hours I kept a continuous drip of honey on my finger pad, mostly to ease the pain. And by the end of the night, what had been an instantaneous blister when I picked up the log had hardened into a white solid mass and the pain was permanently gone.

The less-than-nice-girls actually made fun of me for dripping honey on the wound all night, saying I was being overly dramatic (by sitting silently in my chair with the honey bottle) and that I only needed one drop (I'd like to see them pick up a burning log and tell me if one drop is sufficient!), so one time at home when I burned my knuckles on the heating coil of a toaster oven, I decided to see if their ridicule had any merit. I put several applications of honey on one knuckle and one application on the other. Soon the pain was terribly distracting on the latter, so I put several applications of Burt's Bees Res-Q Ointment, my previous go-to for burns, on it. The wound nursed with honey was 100% hardened and cured and pain-free the next day. The other knuckle hurt and festered for almost two weeks. After two days I put honey on it, but by then it was apparently too late. So, a tip -- put the honey on as quickly as possible and continue for several hours.

I grow aloe at home, and this also is good for burns, but still can't hold a candle to honey because the honey not only eases the pain but literally extracts the swelling and blistering, hardening the burn area. My husband knows now that I've really done a doozy on myself if rather than standing at the faucet with cold water I'm slathering on honey! (I just can't seem to get along with ovens and stove-tops.)

Salt for mosquito bites.  Actually, I can't tell you the story behind my discovery of this because I don't remember now. I have used this remedy so very, very many times that the memory of its origin has been subverted to what is by now a simple force of habit. It's very convenient because you can usually find some salt just about anywhere you travel, so you don't have to carry bottles of anti-itch cream with you or use up your toothpaste (an oft-cited remedy I also have tried). I do remember that what I first learned was to simply make a thick paste of salt with water or just your spit and coat the mosquito bite. I, however, am an impatient person and after deciding there was some merit to this remedy, altered the procedure a bit to forcefully mash some plain salt into the bite -- the more bothersome the bite the harder I mash -- and then put the paste on top. The itch subsides within 5 or 10 minutes and the most impressive feature is that, unlike with creams, it never comes back. Most creams you have to reapply over and over. My husband now uses this method, too. And people do eye us a little funny when we nab a salt shaker off a restaurant table, pour some into our hand and rub it into our skin. But who cares!

Eucalyptus leaves for a cough. I realize this is nothing new … eucalyptus is a common ingredient in relief formulas for chest congestion and sore throats. What I learned was a new delivery method. … On the island of Amantani in the middle of the Peruvian side of Lake Titicaca, visitors can arrange to spend the night with a host family. They feed you, board you, and provide an evening of entertainment at the community center. (You can read details of this experience here.) In the dry, 14,000-foot altitude my lungs and throat were having a miserable time of it. In the morning as I stood in the courtyard waiting for our host to escort us back down the hillside to our boat, I was coughing up a storm. First he picked some moonya growing nearby, a common herb in the high-altitudes of Peru believed to assist the lungs, and gave it to me to rub in my hands and breathe in the fragrance. Then he picked two leaves of eucalyptus from a tree in the courtyard and started chewing them. I presumed he was eating a little snack for himself (I didn’t know at first what the leaves were). He removed them from his mouth and abruptly slapped them on my temples. I was so taken aback at this man pasting his spit-laden leaves onto my head, I was momentarily speechless. The spit, though, was merely the mechanism for affixing them to my temples, where the vapor, also released by chewing, would assist my breathing. Really, it makes perfect sense! In fact, it was a momentary respite from the chronic coughing. But the vapor lasted only so long, unfortunately. After that I continued coughing so wretchedly that people accused me of having tuberculosis and kept a wide berth. (took me almost two months to recover after getting back home) Perhaps even more than learning the power of raw eucalyptus was learning the ingenious method of paste when nothing else is available.

Photo: Holding moonya in my hand, eucalyptus pasted on my temple. 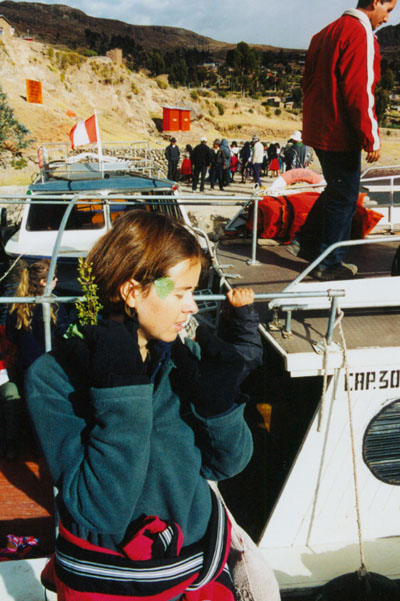 Liquid bandage for cuts and scrapes. Well, apparently this stuff has been around for almost a century and I remained ignorant until a few years ago. In case you are unfamiliar with it, “liquid band-aid” is awesome stuff, you can get it in the first-aid section of a grocery store or pharmacy. Even though it was not appropriate at the time it was suggested to me, in the end it was still a great discovery. Also good to coat blisters with, works better than moleskin. As it sounds, you spread a liquid coating on your minor wound with a brush and let it dry. Infinitely more convenient than a traditional band-aid and completely water-proof. How did I find out about it? From my infamous “wave incident” on Maui, Hawaii, wherein, on the second day of my vacation, I was pummeled by a giant wave and pushed across a stretch of lava rock, thereby making mince-meat of some regions of my body. Resulted in a trip to the ER. (you can read the whole epic here) Amazingly, only two stitches in my chin, but many bandages (including some you can’t see under my clothes). The paramedics who first looked at me did so only briefly, seeing the most minor of the wounds. One said, “Oh, get some liquid bandage on that and then you can keep swimming in the ocean.”  Later, they came to the ER and stopped by my room where I was laid out with an IV, two nurses wielding wire brushes poised over me, and blood all over the table. “Oh my!” they exclaimed. “We didn’t realize your injuries were quite so extensive.” They were way beyond the help of liquid band-aid, yet I remembered the suggestion and looked into that stuff at a later time, and now I NEVER travel without some. 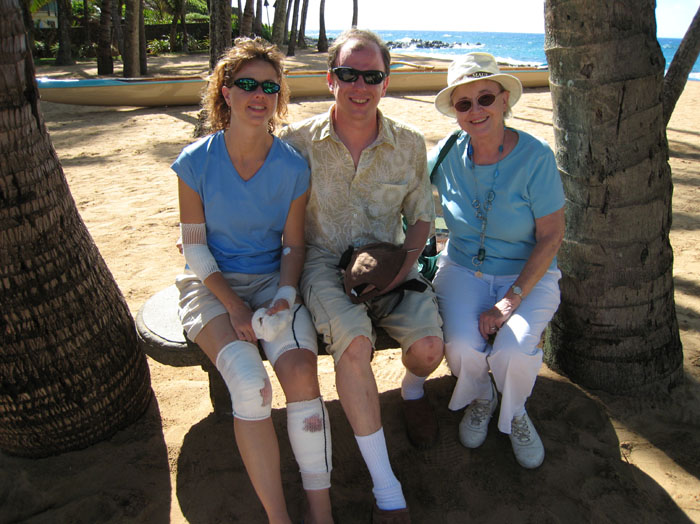 Scorpions for a scorpion bite. I personally didn’t have to be the one to try this out, but while living in the village in China, one night Jiang Lu was stung by a scorpion on her hand. Her whole arm began to swell and pain migrated steadily up all the way to her shoulder. Papa and First Brother gave her their remedy which she brought back to the yao to show the rest of us. It was a bottle of scorpions soaked in some kind of alcohol. She was told to apply some of the liquid to the bite periodically. The pain began to recede within a short period of time. The next day she felt completely better. I feel I need to point out that before she went to bed I also gave her a benadryl. Her quick claim to pain reduction couldn’t have been influenced by the benadryl, though, because I hadn’t given it to her yet. As to the disappearance of swelling and pain overnight, I honestly don’t know if the benadryl could have had any part in it or not. And of course you don’t want to be traveling around with a seriously creepy bottle of distilled scorpions … but I just thought this episode was very interesting. The villagers don’t have any Western medicines or pills -- the dead drunken scorpions are the only thing they use, so one would presume it contains some degree of efficacy. You can read more about scorpions in the Chinese village here.