Fire and Ice ... not just a figure of speech - Iceland

Erik began the day with Black Death. Can you guess what Black Death is? A dark beer, of course. In an effort to save money in this very expensive country, we went cheapo-skate-o and brought with us from home a bunch of instant oatmeal packets and some bowls and spoons, and are using the tea pot in the room to boil water and eat oatmeal for breakfast. Black Death, Erik tells me, makes an excellent breakfast beer for a supplement. I’d been told by several people to buy all our alcohol at the duty-free shop in the airport before exiting. Typically the duty free isn’t available on your way out of the airport, but sure enough it was here, and not just tourists, but the airline pilots and stewardesses, etc., were all loading up grocery carts. So basically we bought a week’s worth of beer, knowing we had a mini fridge in the room, and glad we did so. I pass the advice on to anyone else visiting Iceland – the price of beer in the duty free is at least 50% cheaper than anything outside the airport.

So anyway … Black Death, and then we began our glacier tour. This was our “activity” that was part of the package deal we signed on to for this trip. It was about a 12-hour day. We learned quite a bit about the geology of Iceland from our guide. Driving out to the glacier, you see a lot of volcanoes and also huge stretches of lava fields. The only thing that grows on lava is moss. So these areas are also known as moss fields. It takes 6,000 to 8,000 years for moss to break down lava rock into a layer of top soil, at which time other plants can start to grow. There is not a lot of large flora in Iceland. One of the national jokes is: Q: What do you do if you get lost in an Icelandic forest? A: Stand up.

You may already know that Iceland uses geothermal energy for nearly all their heating needs. Our guide told us that the average heating bill for a household in Iceland is USD$200 to USD$300 per YEAR. Living in the Colorado mountains with a roughly similar climate, I can appreciate how astoundingly low this is. Cold water is full-on free!

So on to the glacier. … First we got set up with our crampons and ice axe. See my stylish crampons on my feet ... 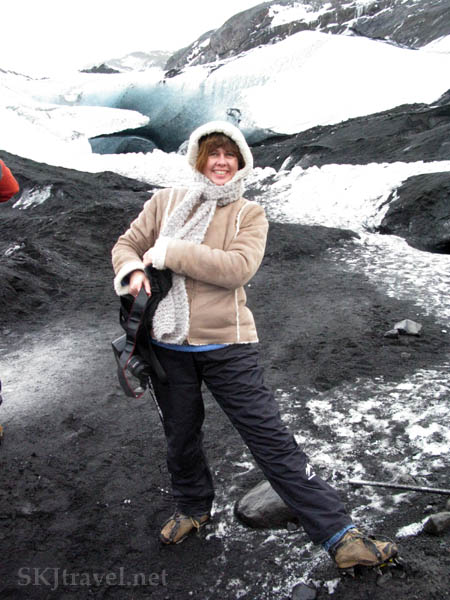 This glacier is currently retreating; apparently a few years ago it came all the way down to the parking lot, now you have to walk over a stretch of rock and ash to ascend it. We’ve walked on one other glacier in the past, in Torres Del Paine national park in Chile. On that trip, we were roped together. When we told our Iceland guide this, he was horrified, saying that was the surest way to death and that they never tied people together. Each to their own method, I guess. 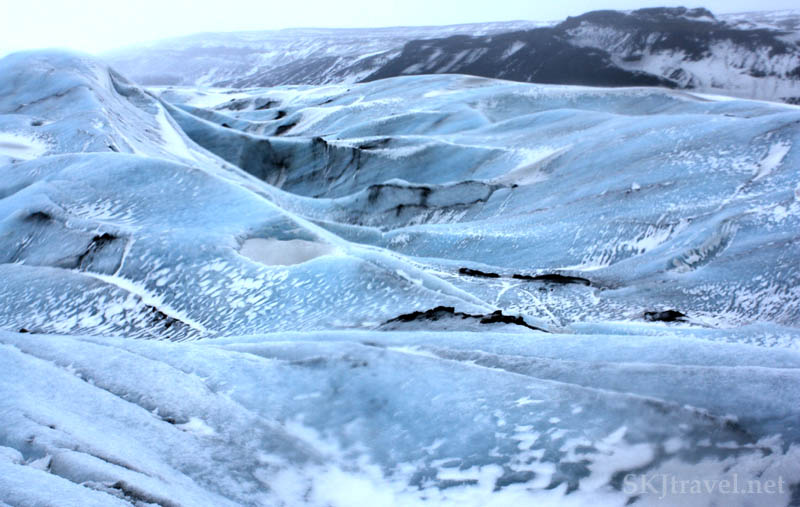 The weather was touch and go … sometimes snowing and sometimes clear. But that made it all the more atmospheric when walking on the glacier amid snowflakes. Unlike the glacier in Patagonia (Chile), which was mostly white with patches of intense blue, here the ice was mostly a continuous subtle shade of blue. And the unique thing was all the black ash infused in various layers and cones  (reputed to be trolls). Very striking landscape, and very close to the coast … so you can stand on the glacier and look straight ahead to see the ocean, to the side to see sheer cliffs of green moss, and behind to see the field of snow and ice stretch out of sight. 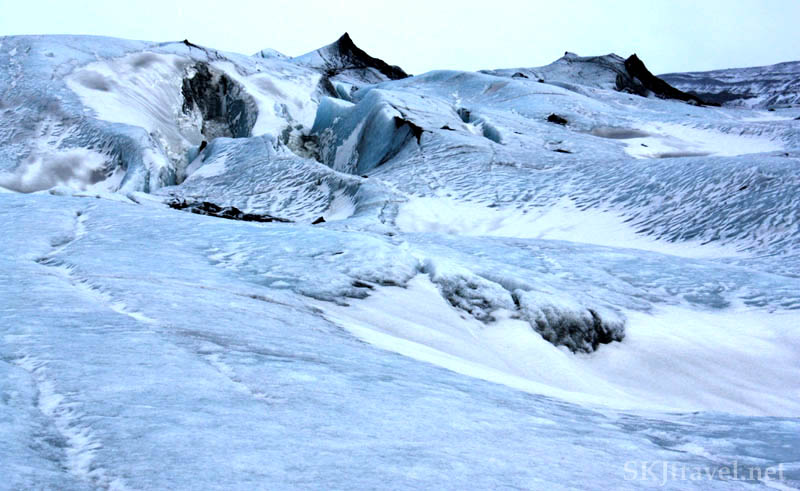 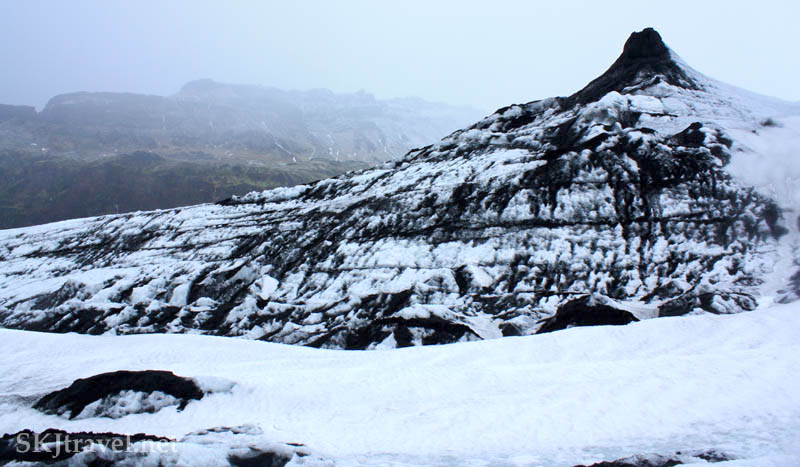 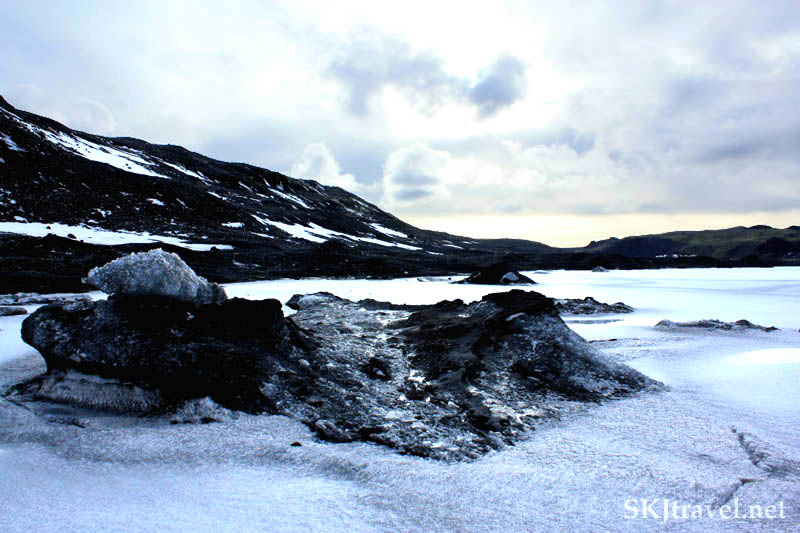 Our guide found us a little ice tunnel to crawl through. The inside was pretty neat, it's ultra smooth glassy ice, blue and rippled. I'm inside looking out at Erik here. 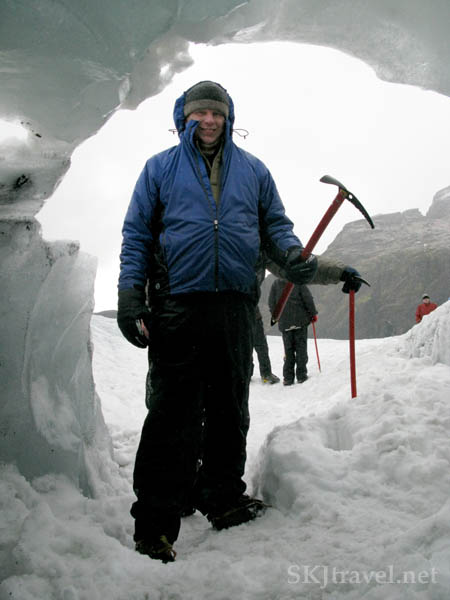 My little moment of excitement came when I had lagged behind everyone else as we neared the bottom in order to take some photos. See Exhibit A: 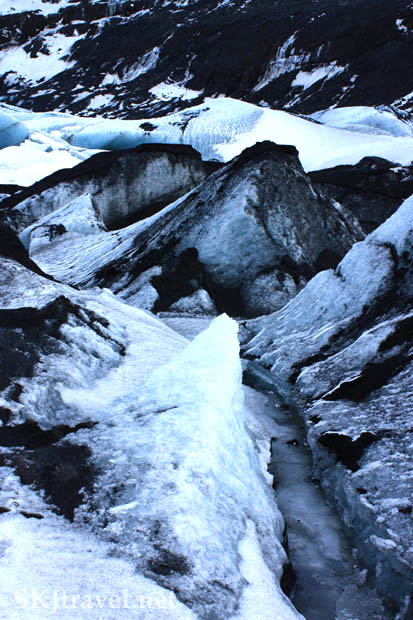 Everyone else disappeared behind the folds of glacier, so when I was done snapping photos, I continued on, but I didn’t take the precise path the others had. I stepped onto some snow and instantaneously, before I could even blink, I was suddenly encased in snow up to my waist. Both legs broke through the snow into a hole in the ice. It was so shocking, I let out a little yelp, and soon one of the guides and Erik came running back to find me in my compromised position. But I was easily extricated. 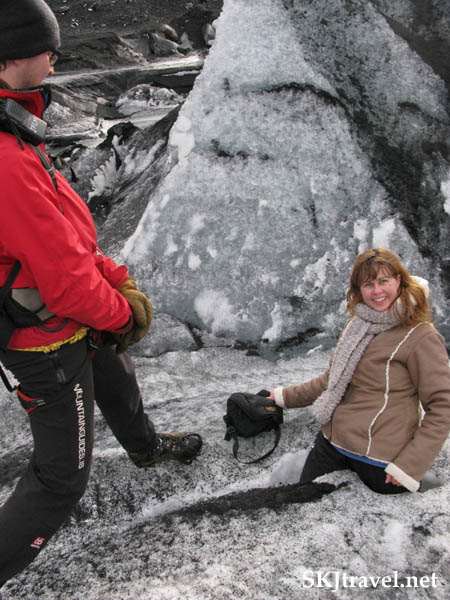 Next we stopped at the beautiful, thunderous Skogafoss waterfall. And were blessed with a rainbow in the mist in the setting sun. Lots of birds nesting in the surrounding cliffs. Notice the people in the second photo for some perspective on how tall the waterfall is. Nearby is a little volcano museum showing a film about a family farm there by the waterfall that was affected by the latest eruption in 2010. A film you can see nowhere else in the world, just at the little museum run by the family who owns the farm … they now make more money on the museum than on farming. 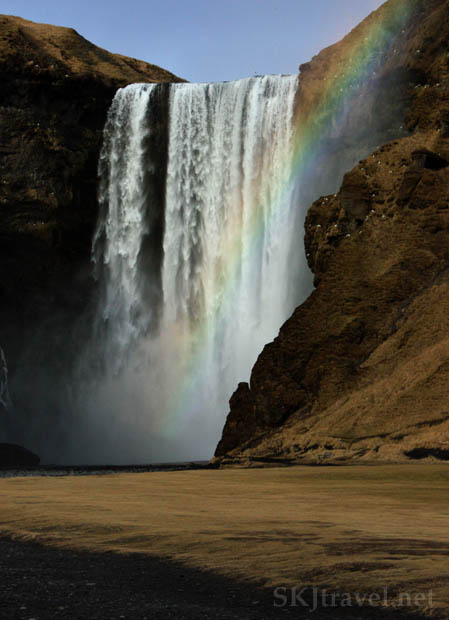 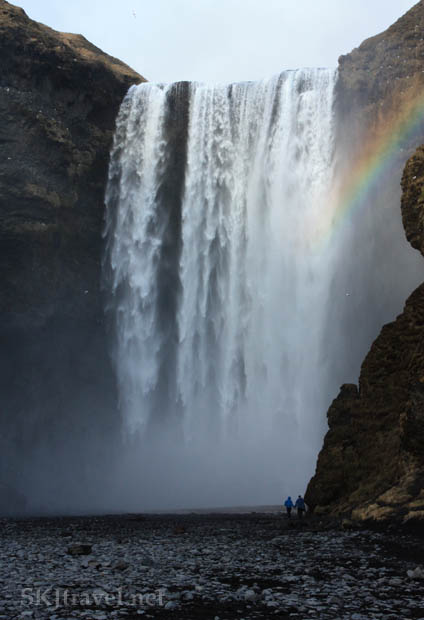 Dinner at a hotel that celebrated the life of Anna the Traveler. Seemed appropriate. And last stop was another spectacular waterfall, but we viewed at the unlikely time of well after dark. The waterfall is lit up at night. There is a path that goes behind the waterfall, we followed with a flashlight. We stood behind the high falls, glazed with an icy cold mist, marveling at how alive the waterfall seemed ... the curtains of water that came down looked just like an aurora borealis the way it shimmered and snaked languidly through the air. Really quite magical. 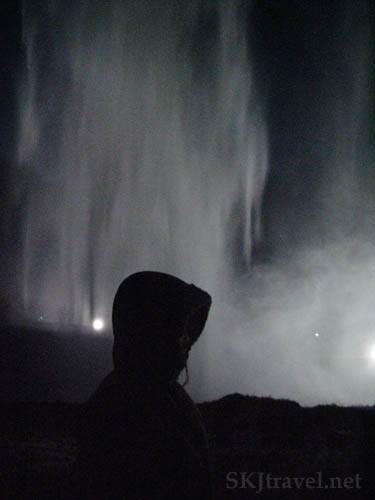