On the Black Road - Iceland

I’ve been through longer tunnels ... in South Africa we spent 12 minutes on a train in complete darkness in a tunnel. I think it was the lights inside this one that made me so aware that I was traveling underneath the ocean for 6 kilometers. While Erik was preoccupied being confounded by the GPS that appeared ('twas an illusion) to work far underground (“that’s not possible!” “GPS’s just don’t work underground!” “it’s impossible!”), I was preoccupied with thinking about all that weight of the water above me, waiting to crush me in an instant. This tunnel was taking us across a narrow finger of ocean so we could access the Snaefellsnes Peninsula. We thought we would check out the national park centered around a volcano in the middle of the peninsula. That didn’t work out, in the end, but no matter. It was a beautiful drive. Here is the Snaefellsjökull volcano looming ahead of us. 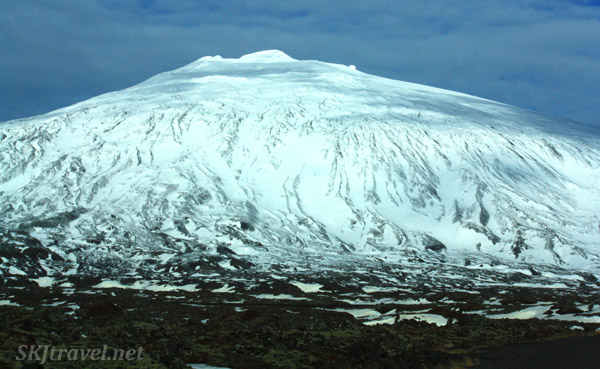 I’ve taken more photographs out the car window and through the windshield while driving (well, as the passenger being driven … I’m not one of those people multi-tasking while driving) than on any other trip by like an order of magnitude. The landscape is so striking. The more so because of the snow that fell on our first full day here, the day we walked the glacier. The black volcanic rock in contrast with the white snow is just lovely. Particularly when you throw in a bright blue sky. 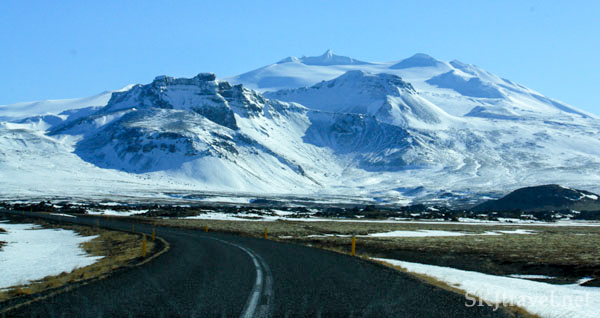 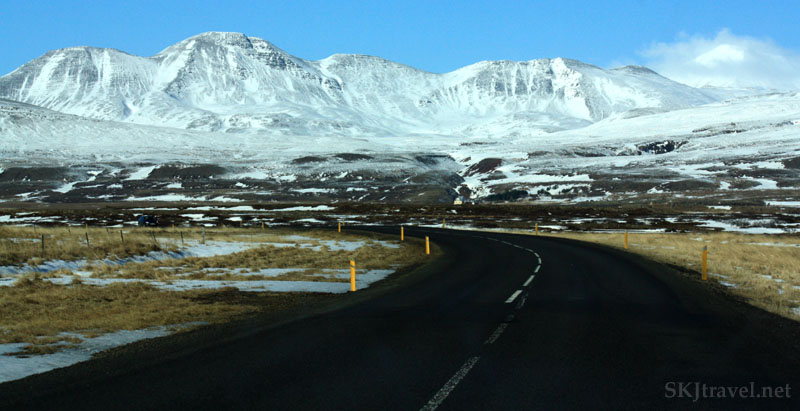 I think the little gate in the left foreground is so random and cute beneath the massive black cliffs. 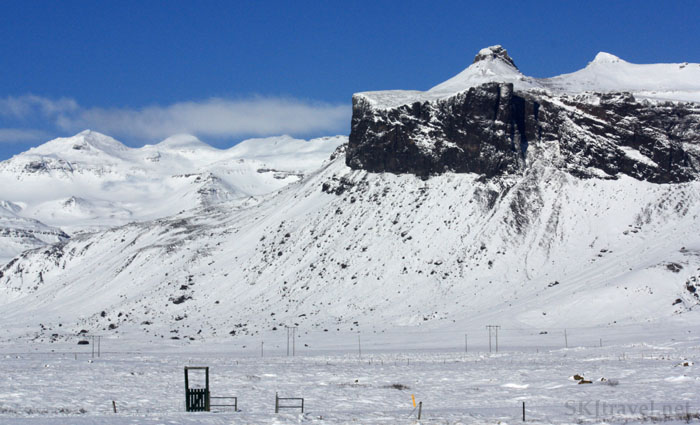 Much of the flat land in the country is covered in lava fields … huge stretches of lava in the slow process of being broken down by moss and weather into soil. The shapes of the rocks in this process of decomposition are absolutely fantastical. I could have spent a whole afternoon just romping through lava fields and marveling at their crinkly craggly convoluted uber-trippy shapes. 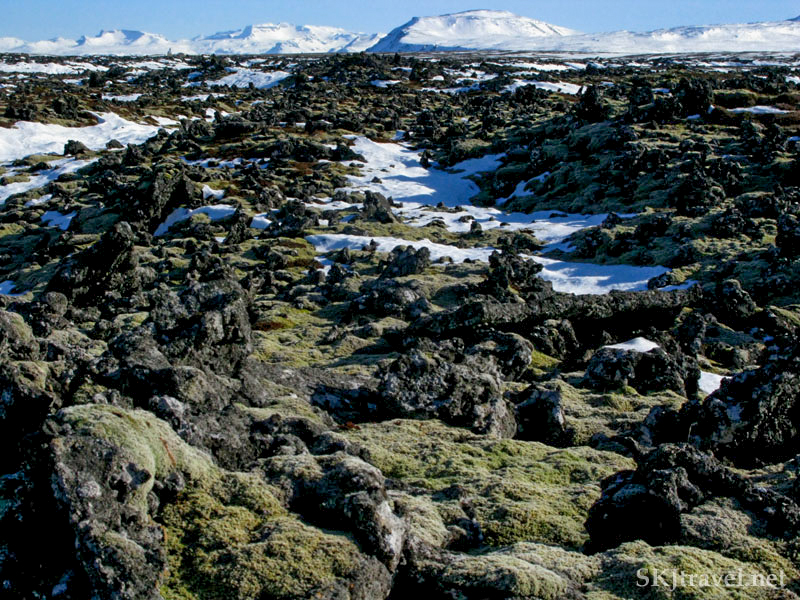 Here’s a close-up of some of the more advanced plant life on this particular lava field. 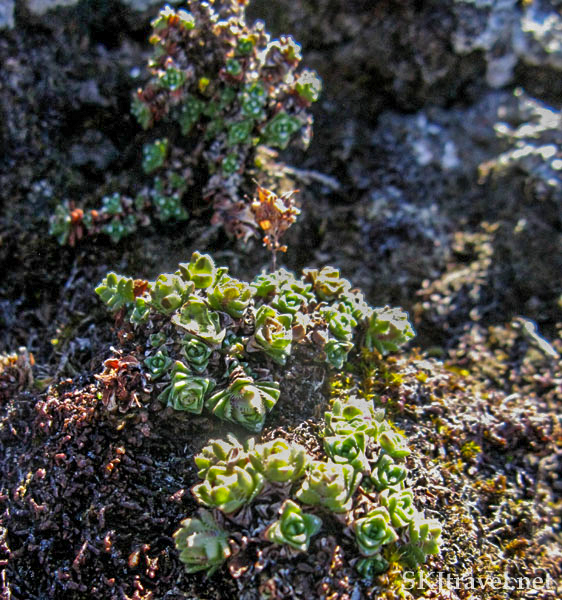 I like how the church in this photo looks like it’s in a diorama. I think this look is due to the two rocks in the foreground. With my 250mm lens on my camera, I couldn’t get past a large foreground; at first I was frustrated and switched to the G9. But in the end, I actually rather like this diorama effect. 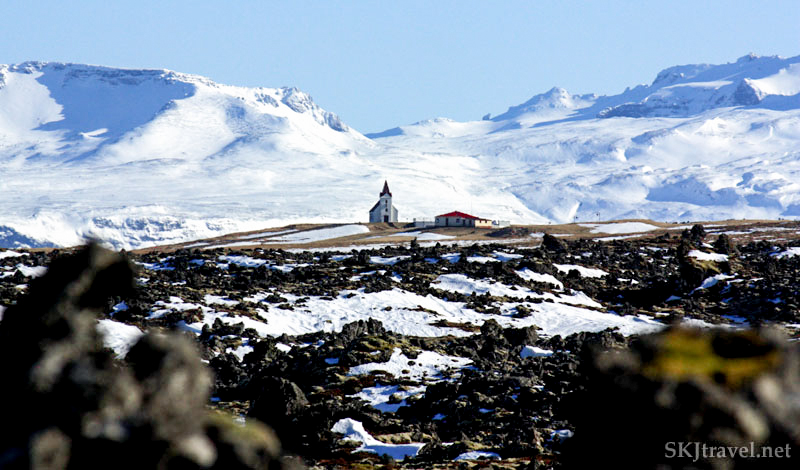 This is an old volcano, rather small that was then cut into to quarry the rocks. Erik is walking up the remains of the quarry, along the edge of the volcano’s caldera. From here I snapped the photo of the clouds … they were very interesting during our stay in that they moved into an area with a defined line, quite like an army would, at least in the ancient days of battle. Seldom, if ever, was there a gradual building of wisps or cottonball clumps, just this advancing line. 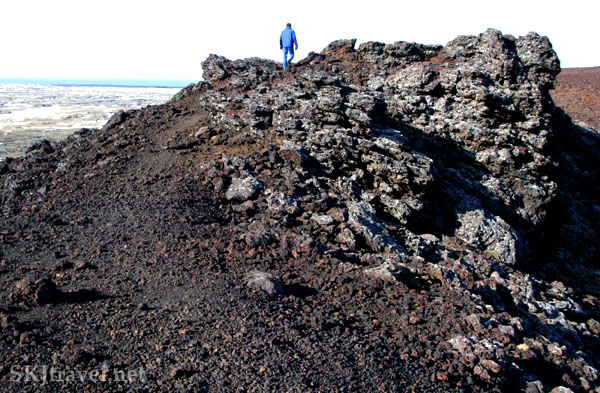 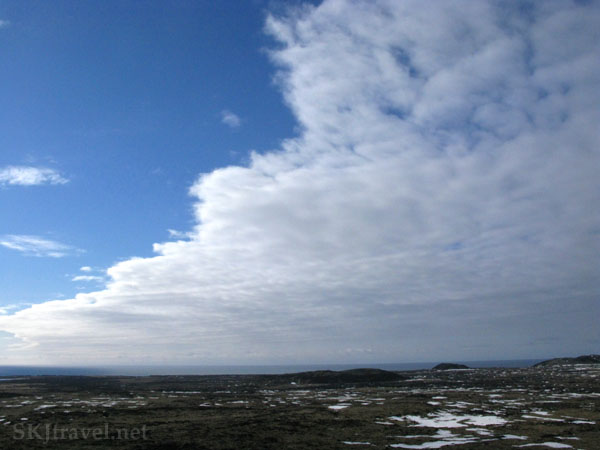 The landscape is dotted with tiny little churches set at the bottom of huge mountainsides. I asked one of our hotel staff about the churches, as there are so many and they are so itty-bitty, I wondered if each one had a minister. Apparently, one minister might have as many as 8 or 10 churches under his direction. Nearly all Icelanders belong to the national church, which is evangelical-Lutheran. I don’t even know what that compound label means, but that’s what the sign said in the big church in the middle of Reykjavik. In about 1000 AD the ruler of Iceland at the time decided that for the harmony of the country, all citizens should follow the same religion, and so all Icelanders were mandated by law to be baptized into Christianity. 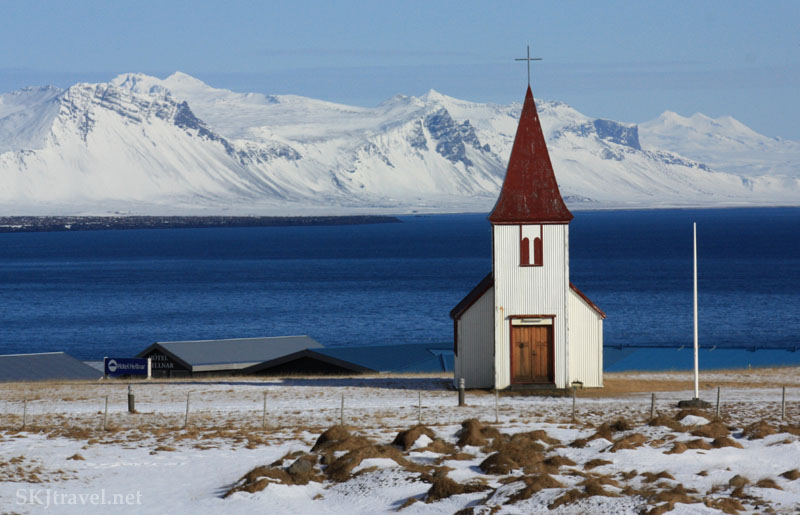 Many of the churches are only used for special occasions such as weddings, funerals, holidays, etc. I started referring to them as 3-, 4- or 5-window churches, in reference to the number of windows along the congregation section (behind the steeple). Five-window churches are the big boys. 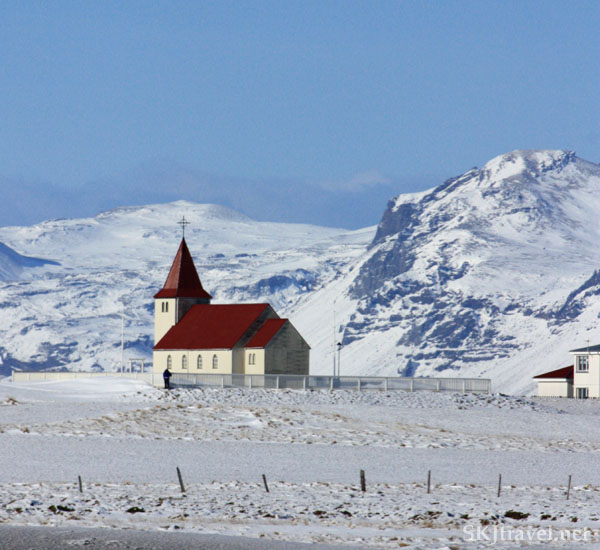 All the graveyards we looked at contained graves spanning a large width of time. Usually dates on tombstones ranged from the early- to mid-1800s all the way up into the 2000s. 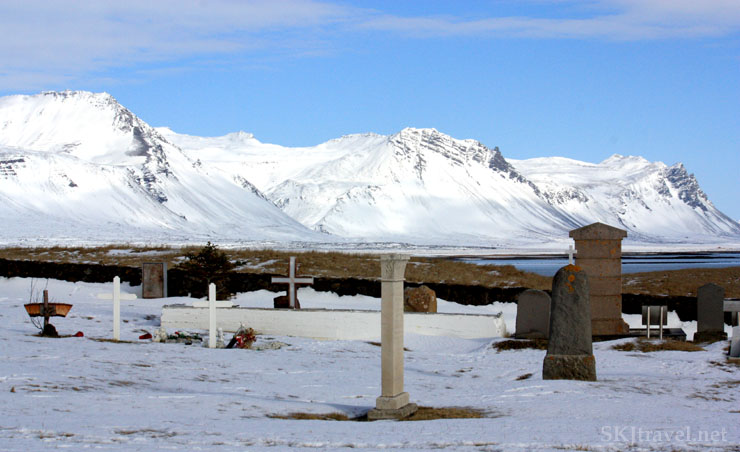 This is a church built in 1703 and rebuilt in 1848 through the efforts of a local woman who was adamant that its disrepair be remedied. For some reason, the church elders didn’t want the church rebuilt, but support grew with the local population and they contributed funds for its repair. The official church council of the country made a point to put a plaque on the new church explicitly declaring it was rebuilt without the support of the church elders. I think this is funny that they felt compelled to officially express their disapproval. 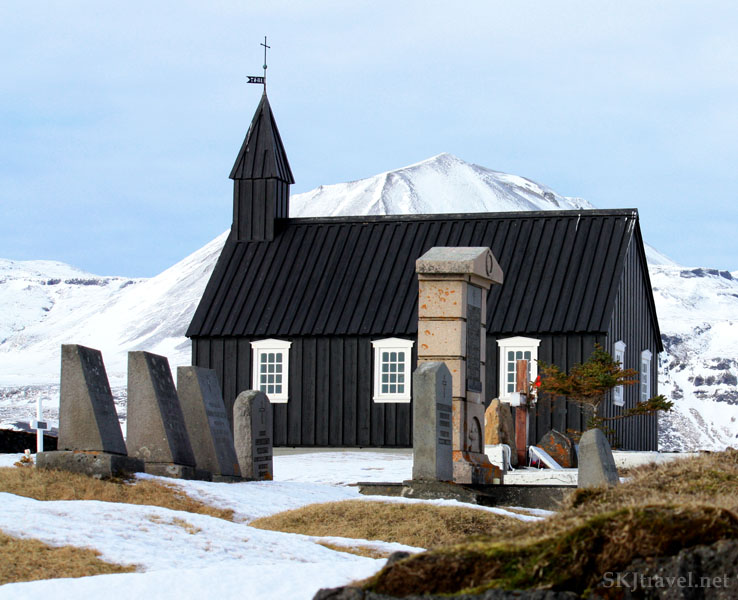 What I think is so charming about the insides of these tiny churches is that they even find room for a choir loft. The choir is probably only the neighbor, Thor, and his wife and two cousins. I wish I could witness a service inside one. 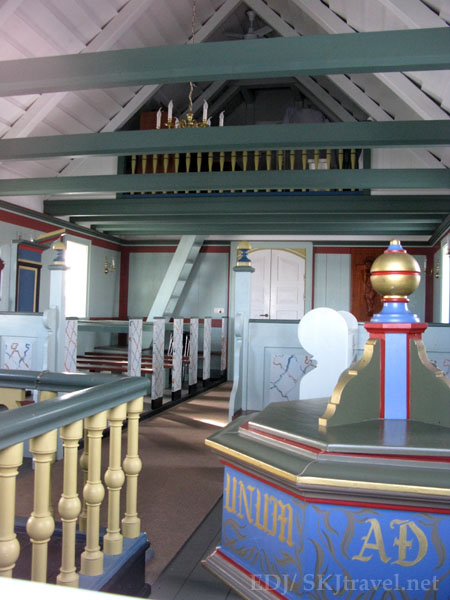 After driving through the middle of the peninsula over a high pass and around the whole coastline, we headed home. When the sun sets behind the ocean, it’s a giant disc. I've seldom witnessed a sun so sharply defined in shape, just this crisp disc, like a monstrous penny thrown out from one of the volcanoes onto the horizon. 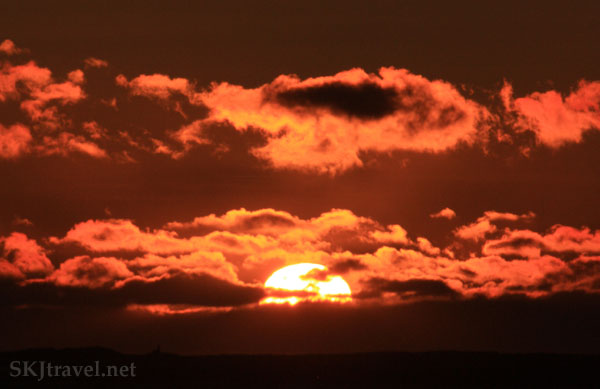 I had brought a couple beers with us from our duty-free shopping spree sitting in our hotel mini-fridge, figuring we’d find a spot at the end of the day to enjoy them. We found this little half-frozen waterfall just off the highway down a nondescript dirt road, where we looked out across the deep blue ocean. The water here is always the prettiest color. Though the sun had already set, dusk lasts forever here … the time between when the sun goes down and when it gets dark seems inordinately long. So we sat in the dusk enjoying our Icelandic beverages, toasting the end of another lovely day. 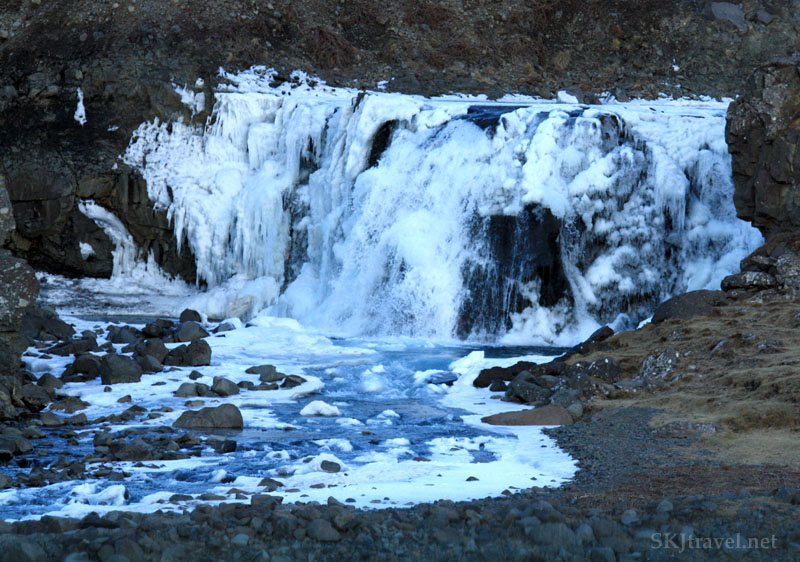