A Glimpse of Glymur - tallest waterfall in Iceland 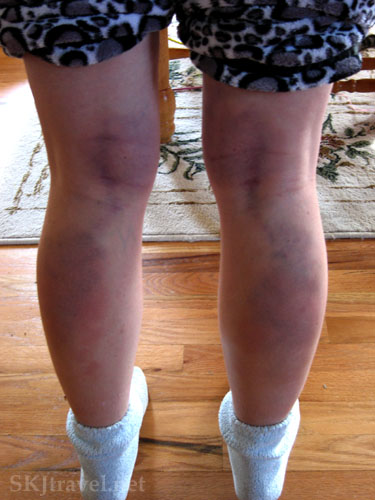 The legs are mine; those are bruises. The caption that accompanies this photo is Erik’s quote of the day, uttered with genuine sadness:  “Spider Shark only lived one day.” Spider Shark’s life is so short because she will never again try crossing a wire by the same method that so impressed Erik, looking, apparently, like a spider. (Shark is one of, and the most popular of, my nicknames.)

So how did I acquire these rather painful beauties? I might as well start at the beginning … the guidebook said Glymur Falls was the tallest in Iceland. It wasn’t a far drive from Reykjavik, and though you must hike several kilometers to see it, we had until about 1:00pm before we needed to head for the airport (from the trailhead) to go home. So we decided to spend the morning before our rather important flight undertaking a hike that others had described (online in blogs) as “challenging,” “not for the faint-hearted,” “dangerous,” etc., as well as taking more time than we had. (Because that’s the way we roll …) So we were aware of the cable-wire river crossing, that if you wanted the full view of the falls you had to take the path that crossed the river, and I warned Erik that when we reached it, I might wuss out.

It was a cold (about 32 F/0 C) and very windy morning, and when we arrived at the crossing, it was clear that falling in an icy river and getting wet in this weather would be extraordinarily unpleasant. 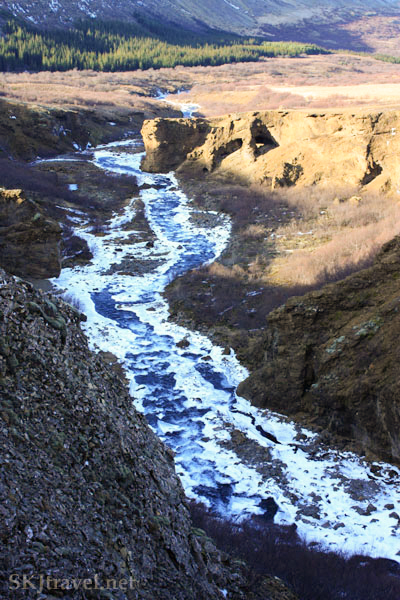 We hemmed and hawed, both of us feeling nervous about it. I didn’t know it at the time, but Erik was apparently feeling even more trepidation than I was. I have an unfortunately dainty and flawed build in much of my body (I often tell people I was built to be a couch potato), my hands in particular regularly suffer from tendonitis and are very wimpy. My primary concern was having the strength in my hands to make it across the wire. But I knew I would regret turning back, so I stood patiently at the river’s edge until my courage built up to a sufficient level, then said, “OK,” and clung onto the wire. After I was across, Erik followed.

The bruises come from my rather ungainly method of crossing, hooking and unhooking my legs from the wire, moving them one in front of the other in a way that Erik exuberantly insisted looked like a spider crawling across the wire. “You look just like a spider! That’s so cool!” This way made me feel the most secure because I didn’t have the strength to just lock my legs around the wire and pull my body weight across with my hands. It was a bit of an uphill haul crossing that direction and honestly, I barely made it. It actually took more courage for me to cross going back home because I knew then how difficult it would be for me. But that direction was downhill and it turned out to be easier. The sorest part of Erik’s body ended up being the muscles in his arm because of what he said was his “death grip” on the wire while crossing. 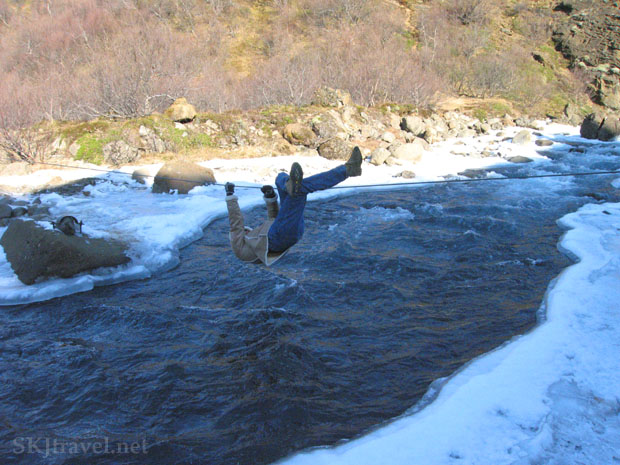 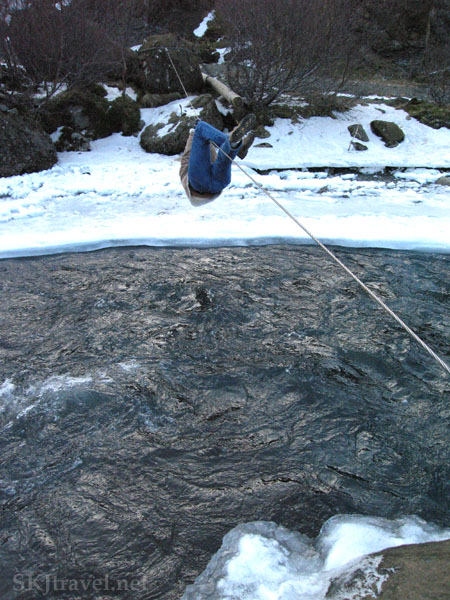 As we predicted, it was worth the unconventional river crossing. Once we climbed uphill to the top of the plateau, we had marvelous views of the valley to the ocean. 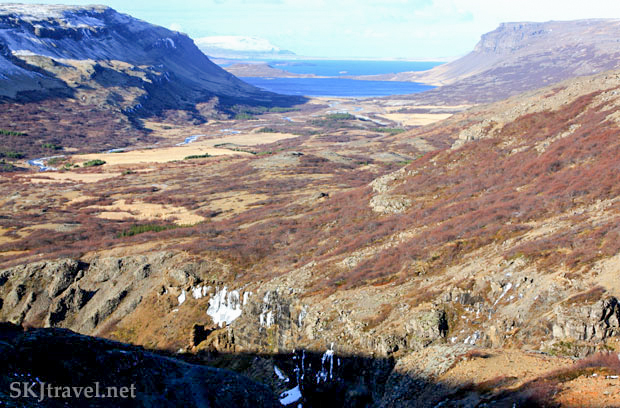 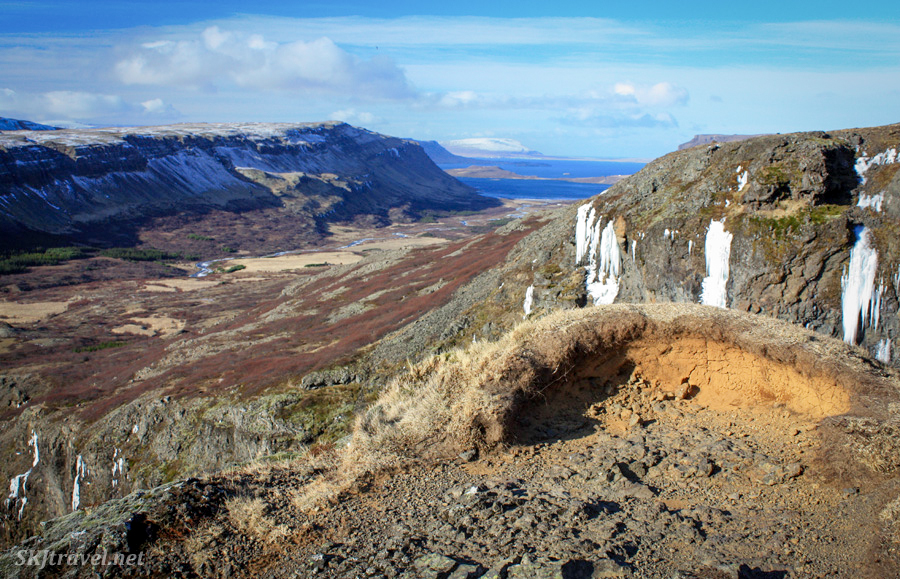 And we encountered numerous small frozen waterfalls along the way, which are wonderfully enchanting with their frozen shapes and the blue tint like we saw at Gullfoss and on the glacier.

The cliffs oozed water everywhere, now frozen. I’m sure it’s lovely in summer, but truly I think it’s more of a uniquely magical place in winter with everything frozen, taking up far more space than running water, creating glassy shapes, and standing out boldly from the rock. Sometimes it looked like frosting on a cake. 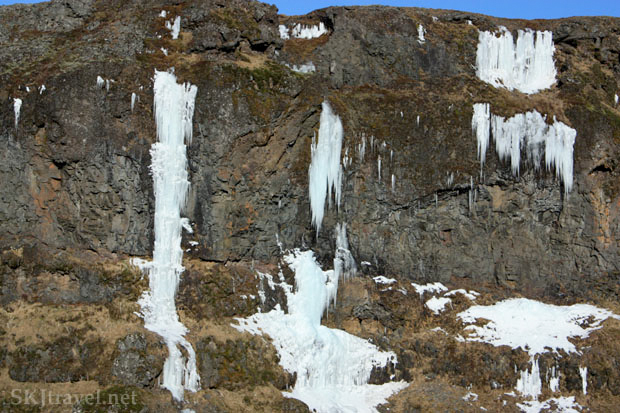 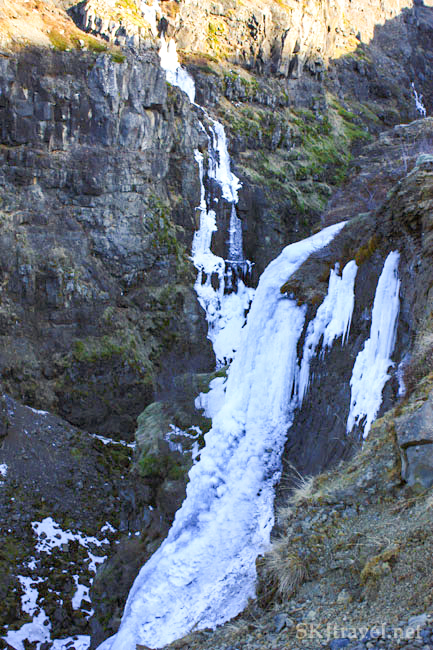 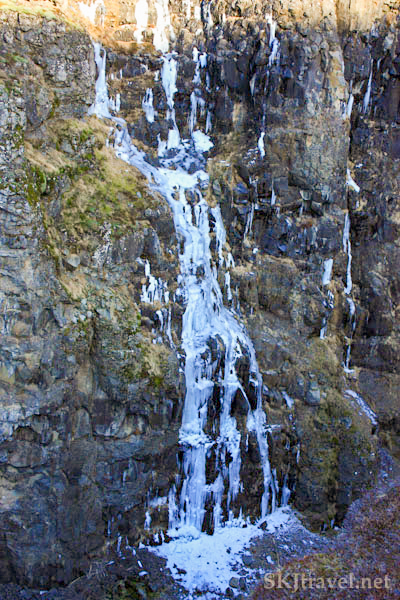 So … steeply uphill across snow and skree and frozen rivulets, fighting a wind that sometimes almost knocked me over. (Are we having fun yet? Well, actually yes, we are in our way.) 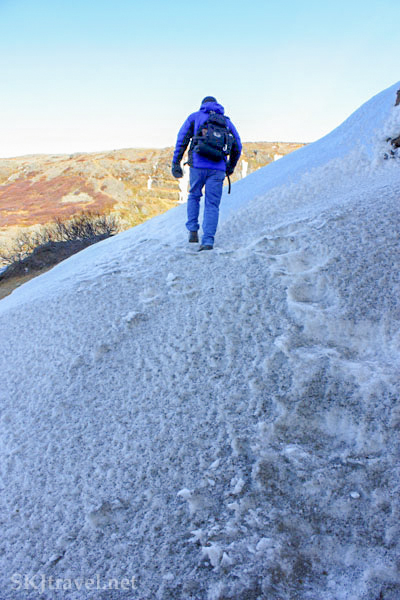 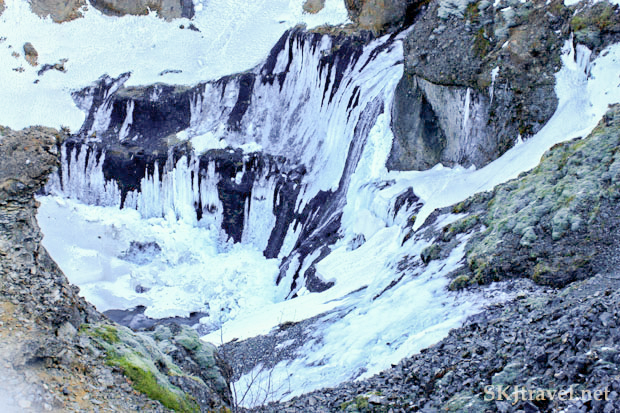 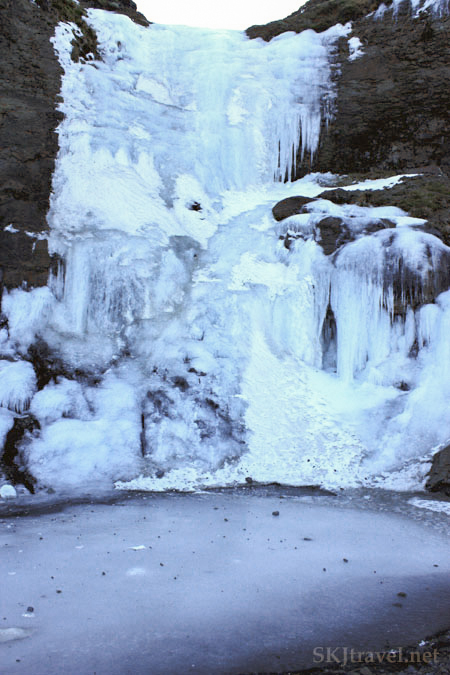 To be rewarded with a full view of the waterfall from top to bottom. The lighting was (again) miserable, and I can’t claim to have captured much of its essence, the colors are funky, but there is my shot at it. This is the first view we came across of pretty much the whole fall (disappears a bit near the bottom into the narrow box canyon). You can pick out the thin stream of still-running water far to the right in the bottom third. The photos I’ve seen of these falls in summer show a fairly narrow strip of water falling down all silver and shimmering and obviously lovely. But look how wide the fall is in winter, with the spray frozen onto the rocks all around. I'm really quite a champion of these winter waterfalls. In case you wonder about the consistent blue hue, it comes from the glacial water and the color comes from "glacial flour," basically sediment in the water. It always has a kind of cornflower-blue tint, sometimes darker blue, and sometimes almost a sea green. You'll find this in any large body of glacial water ... rivers, lakes, waterfalls. I don't know what causes the change from bluish to purplish at these falls. 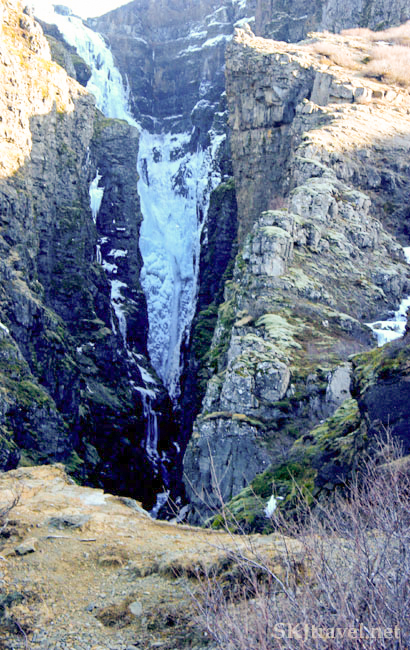 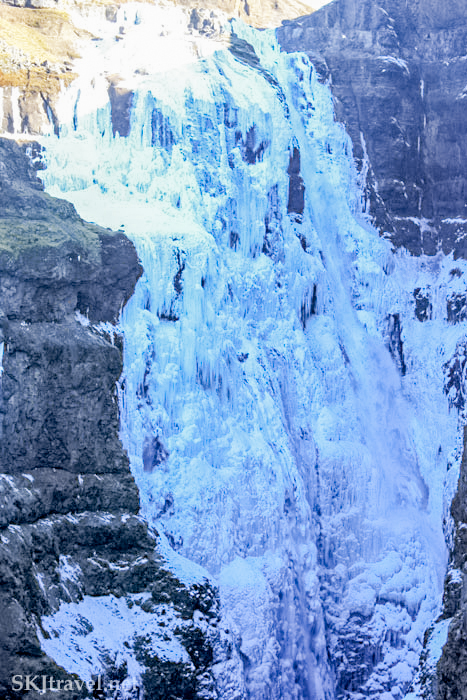 You can ultimately hike all the way to the top of the falls, but we didn’t have the time, and had already succeeded in getting perhaps the most rewarding view … the entire length. One particularly fun feature along the trail is a tunnel you have to walk through, with one entrance from the top and two exits, like the eye sockets of a skull, at the bottom. 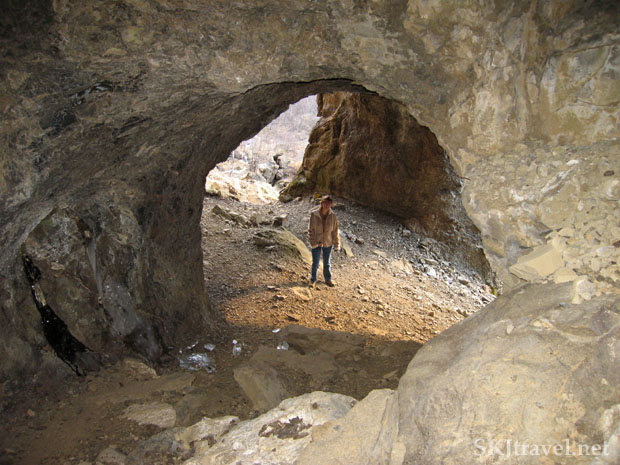 The other point of amusement this day was while we were driving around trying to remember where the trailhead was, we met the fastest little dogs I’ve ever seen. We had found the trailhead another day when it was too late to start a hike, and thought we remembered the route without consulting the map. Turns out we were wrong, but it was pretty much worth it to have gotten temporarily lost for the pleasure of witnessing these dogs. We clocked them running beside us at about 55 km/hr (34 mph). They chased us on our way in for a long time. After we finally lost them, it wasn’t long before we realized we were on the wrong road and had to turn around. Those dogs knew we would be coming back and they were literally waiting to ambush us as we drove by again, springing from the bushes in the ditch and chasing us maniacally.

We changed clothes back at the hotel, though we had checked out they let us dress in the changing rooms in the spa, as the hotel was right on the way to the airport. Arrived with plenty of time to check in, so we finished off the last of our duty-free beers in the truck with the radio on. Turned the car off and politely popped the hood and reconnected the battery wire so the rental people could start the car to move it back to their lot (we were to park in the public parking and they’d retrieve it).

Making our way through the Reykjavik airport, both on arrival and departure, was the quickest, smoothest international airport/flying experience I’ve ever had. I would almost say it was a pleasure, but I can’t bring myself to go quite that far; it was still an airport.

One more post to come with miscellaneous photos from the road.