Persepolis: Glory of the Persian Empire

We awoke today with a sense of excitement knowing we would see one of the sights we were most looking forward to on this trip. As we both harbor a deep interest in ancient history, the chance to see the seat of the ancient Persian empire, Persepolis, was something special to us.

Persepolis was the nucleus of the ancient city of Parsa, which was the architectural center of the Achaemenid dynasty, the founding dynasty of the Persian empire. Iranians consider it the representation of “the cradle of their nationhood and culture.” Consider that a few decades ago, Iran celebrated its 2,500th anniversary as a Persian nation. Meanwhile at about the same time, the USA was celebrating its 200th anniversary. Iranians are very proud of their ancient roots and their cohesive existence as a culture through such a vast stretch of time.

Below are some pics of the "Gate of All Lands." Dignitaries and important visitors from other nations had to pass beneath these arches to the audience palace where they could be received. The hallmark of the early Persian empire was the freedom it gave all the nations under its control ... they each were allowed their own cultural freedom and national identity. One could consider Persepolis a kind of ancient "United Nations," the center where they all met for discourse and interaction. 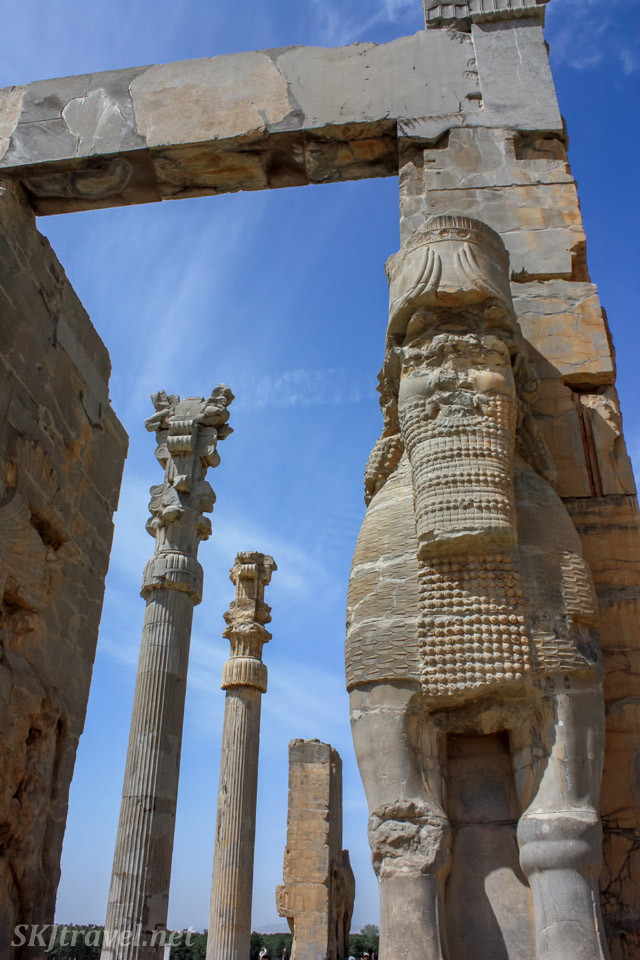 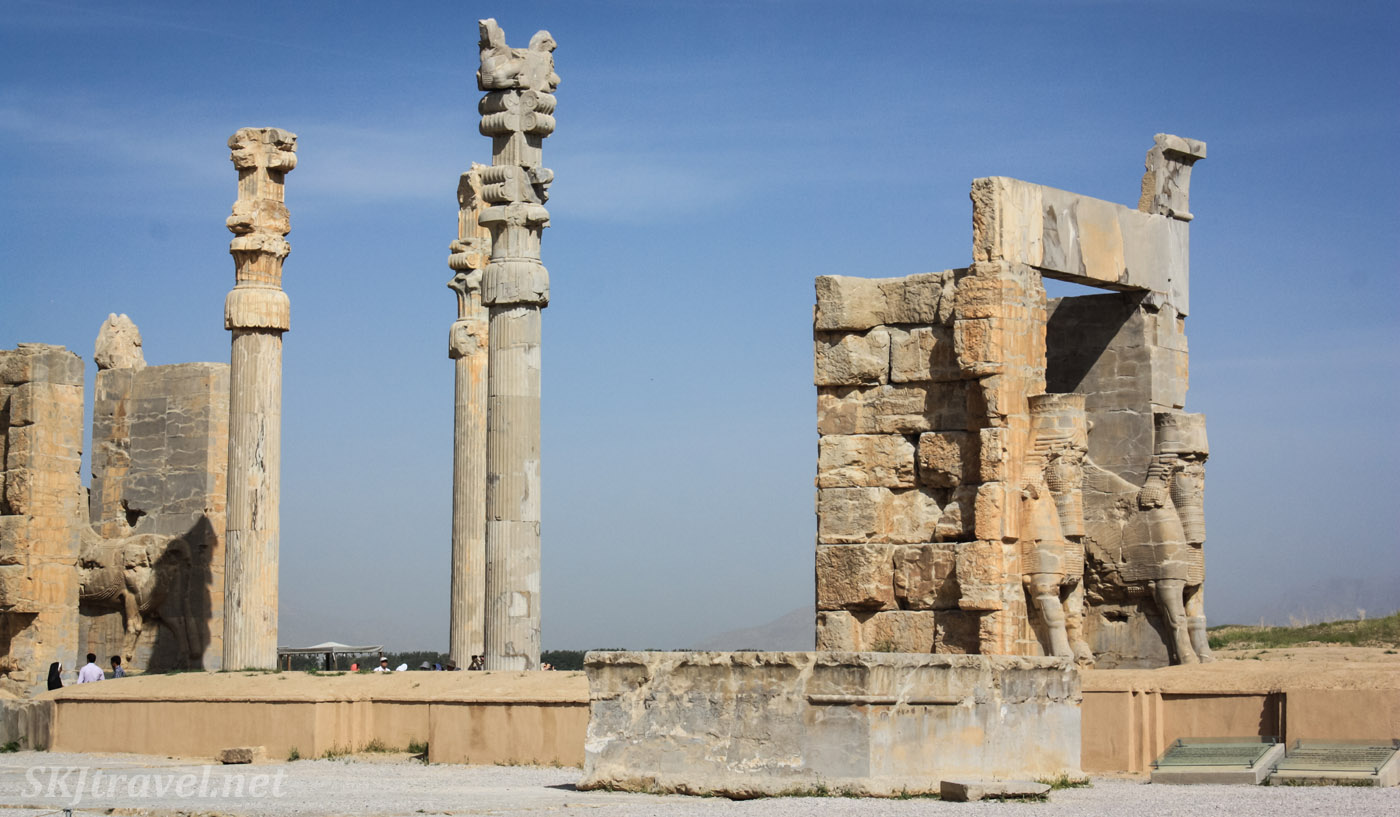 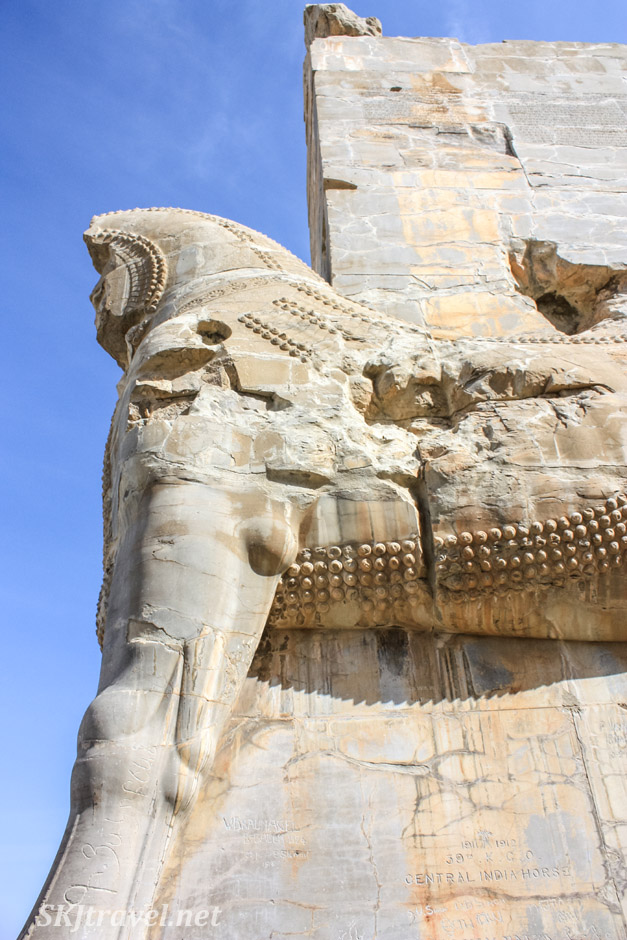 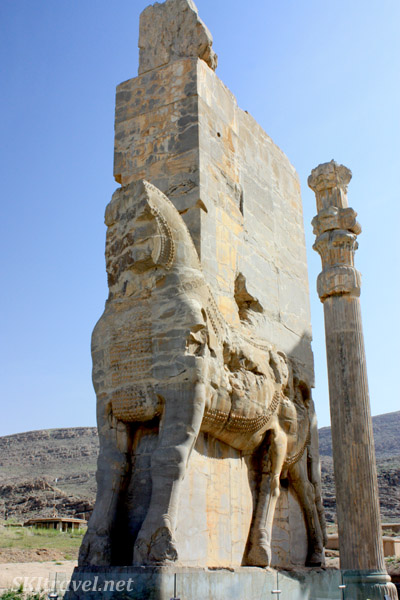 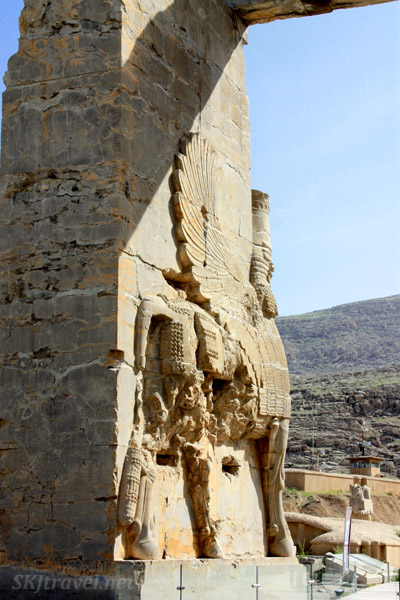 The palaces in the acropolis were built during the years 522 to 486 BC by Darius the Great and succeeding kings of the dynasty. Parsa was burned down in 330 BC by the famous Macedonian, Alexander the Great. Animosity still seems to exist today against the Greeks for this sacrilegious act of destruction (some say it was on purpose, some say by accident, but either way, Alexander was responsible). I find it interesting how such feelings can persist for so many generations (this of course is not a unique phenomenon in the world), how a national psyche can be nurtured over millennia regarding ancient foes. 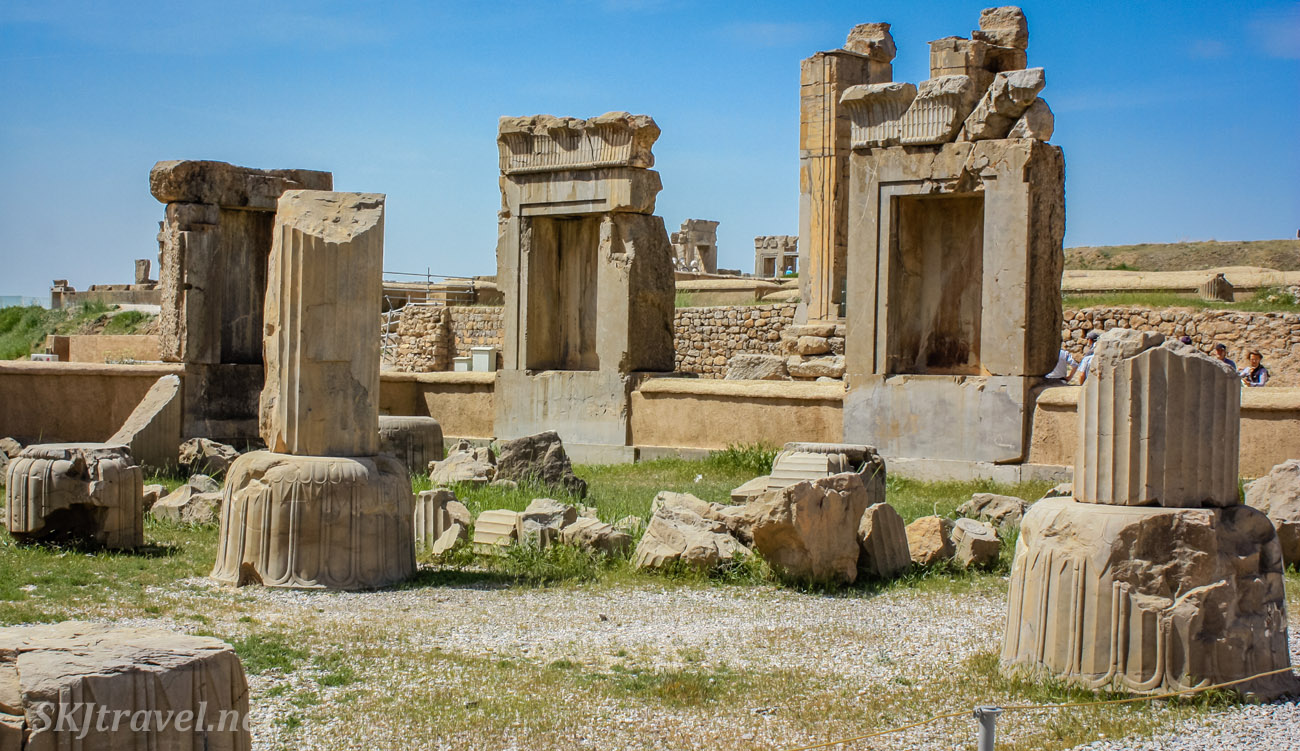 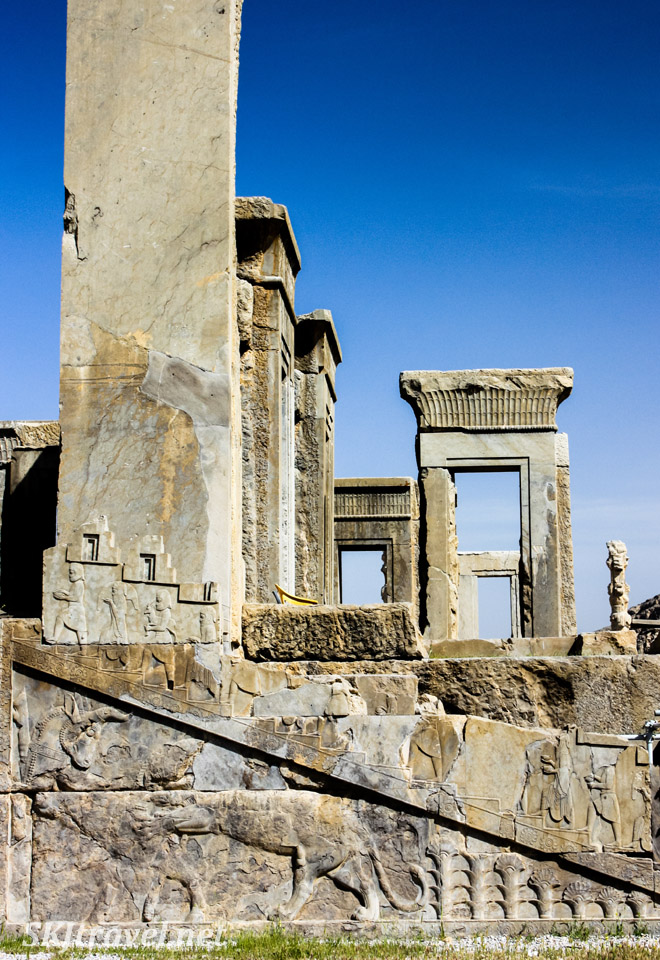 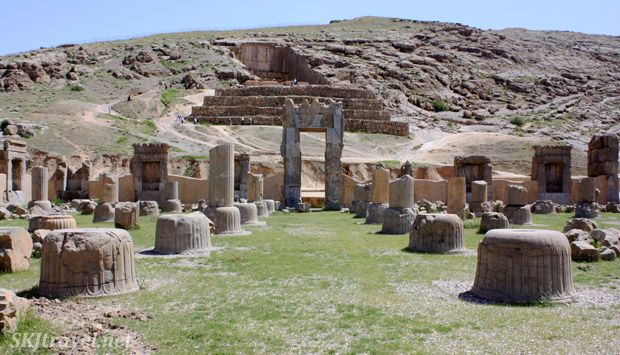 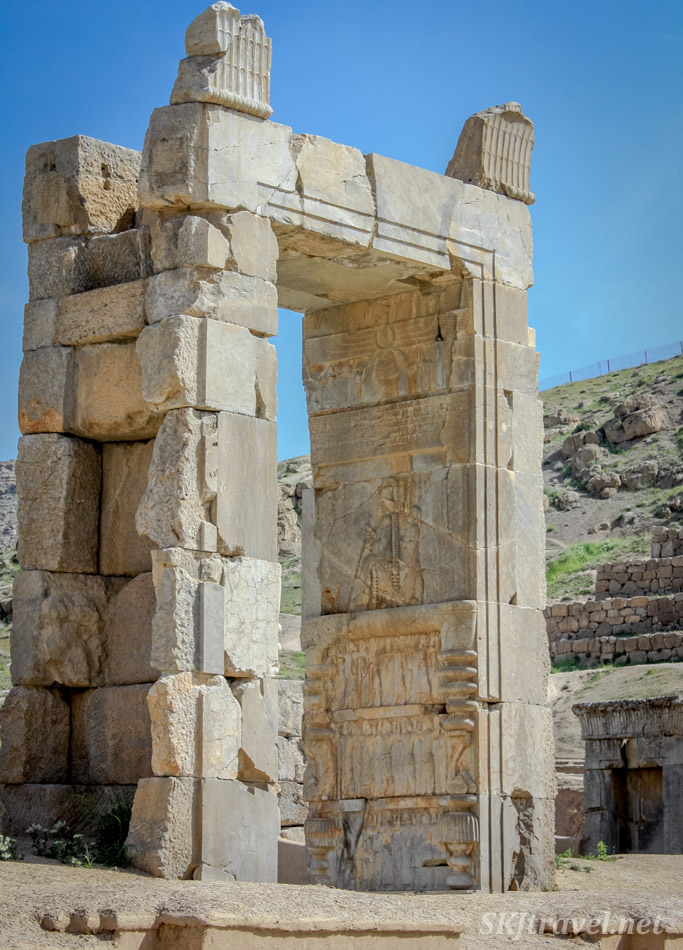 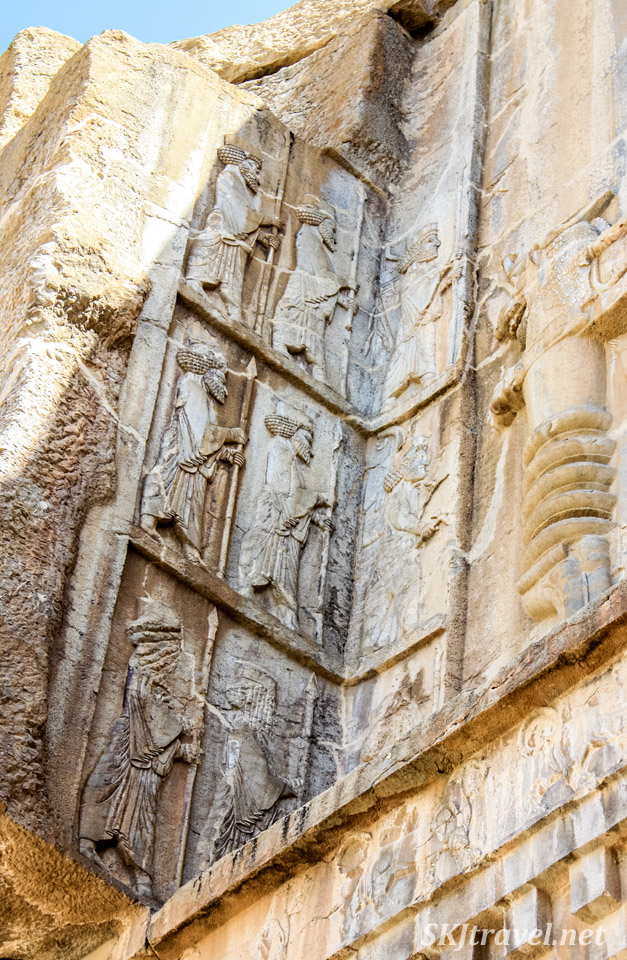 Standing among such ancient grandeur really gives one a sort of glorious feeling. As if you can briefly grasp how epic the history of human civilization is. I dunno ... I can almost hear triumphant symphonies playing in the background. It's not my nation, not my culture, not my heritage or history, but I feel so proud of it anyway -- just proud of "civilization" in general for its vision, creativity, artistry and diplomacy in the ancient world. One thing the locals are quick to point out about Persepolis is that unlike places such as Bishapour, Persepolis was not built with slave labor, it was a work force free in will. 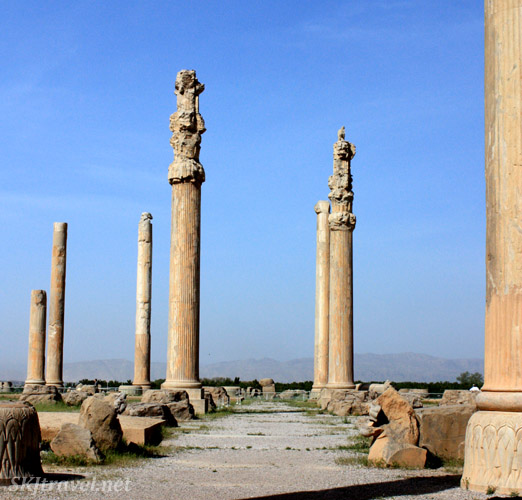 Imagine … once all of the stone surfaces -- walls, steps and stairways, arches -- were covered in bas relief figures, like these below, and cuneiform writing. In the first photo you can see how the original stone was once a polished black. It must have looked such a splendor. How I wish for a time machine! 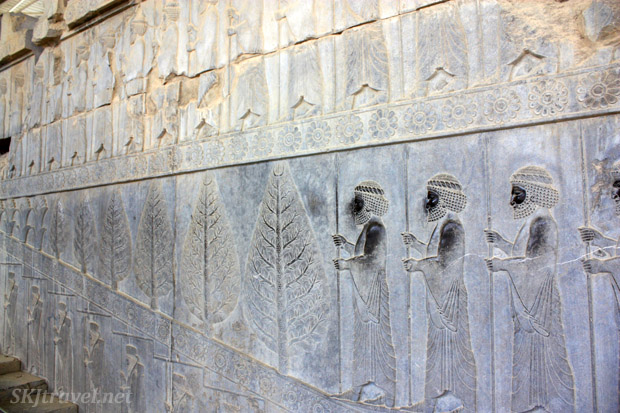 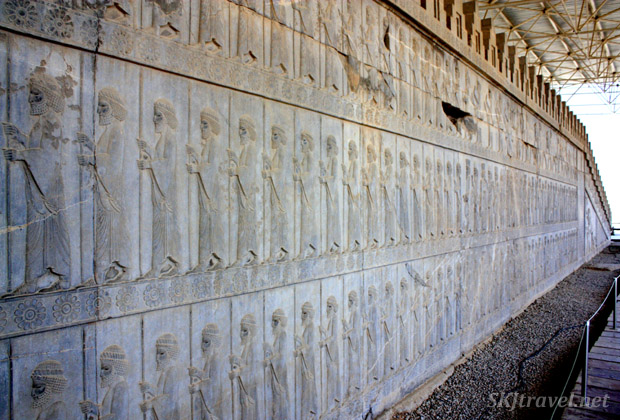 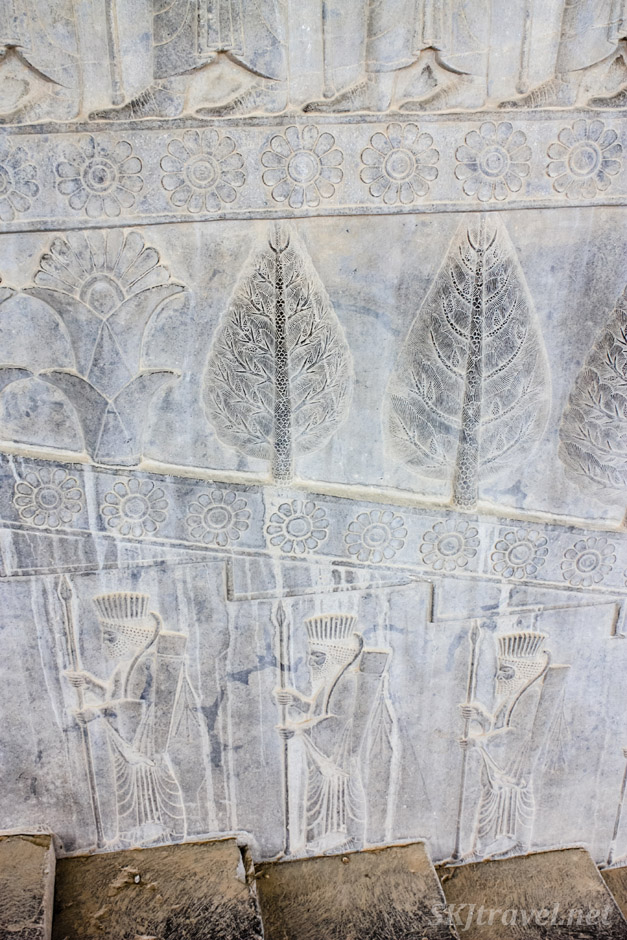 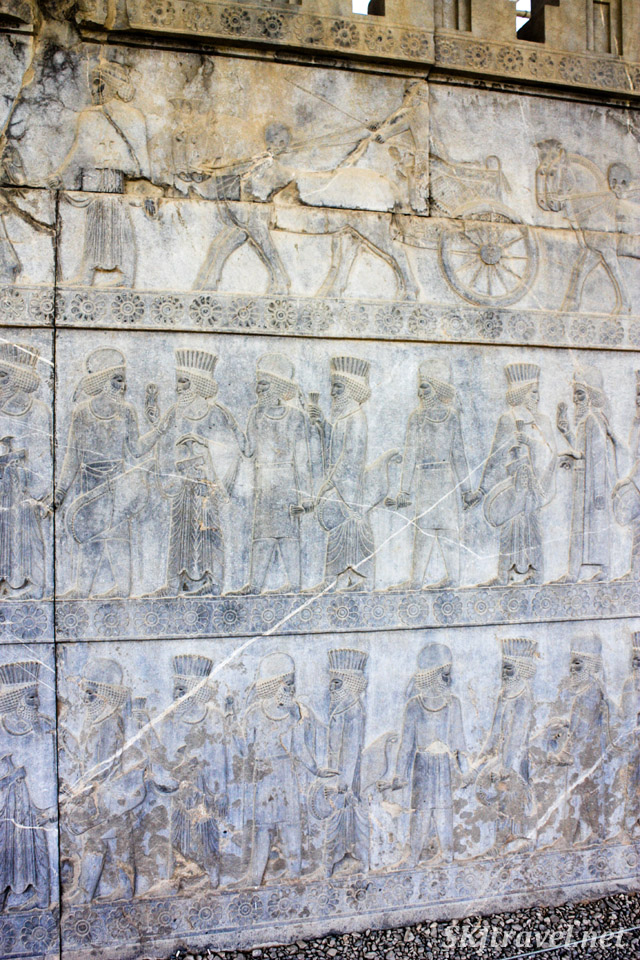 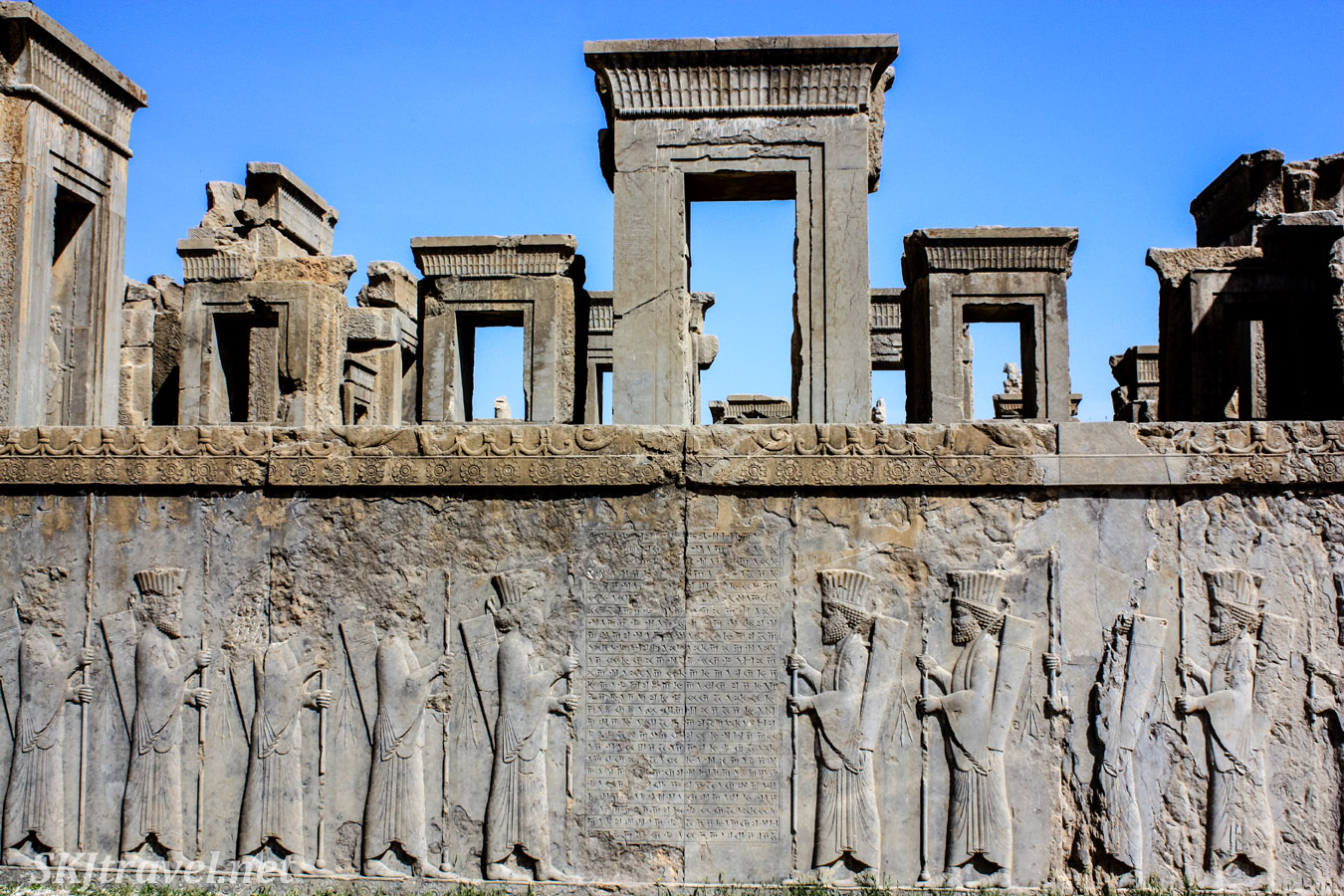 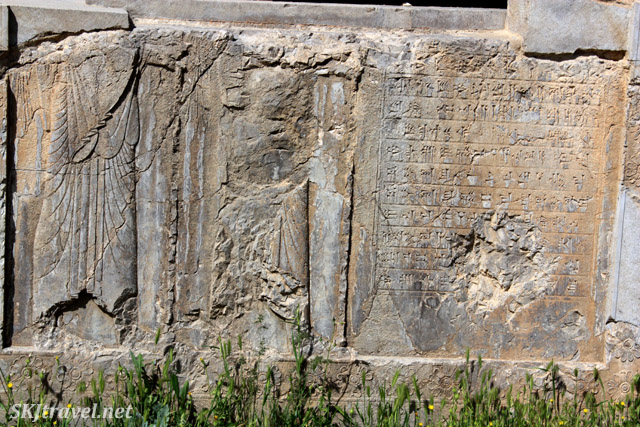 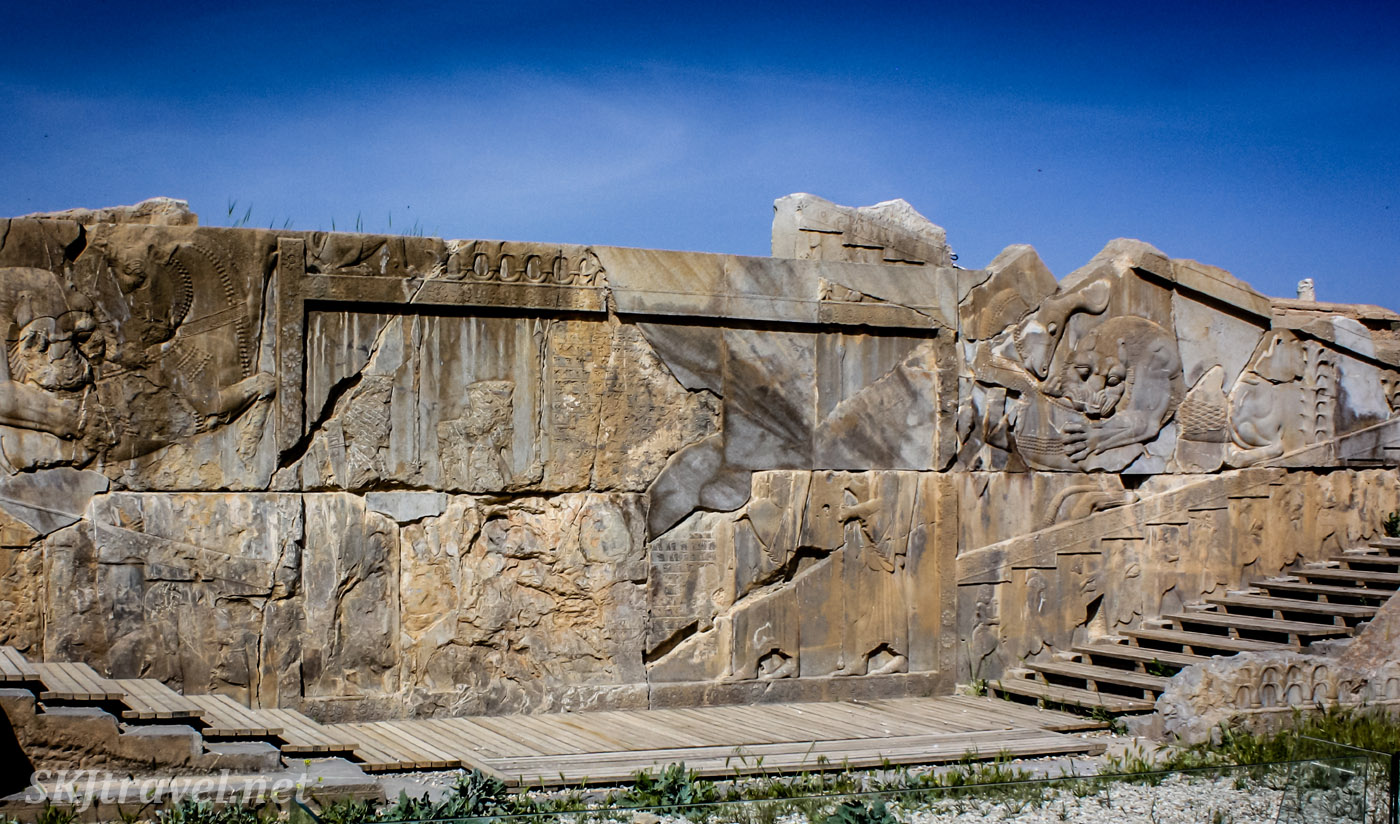 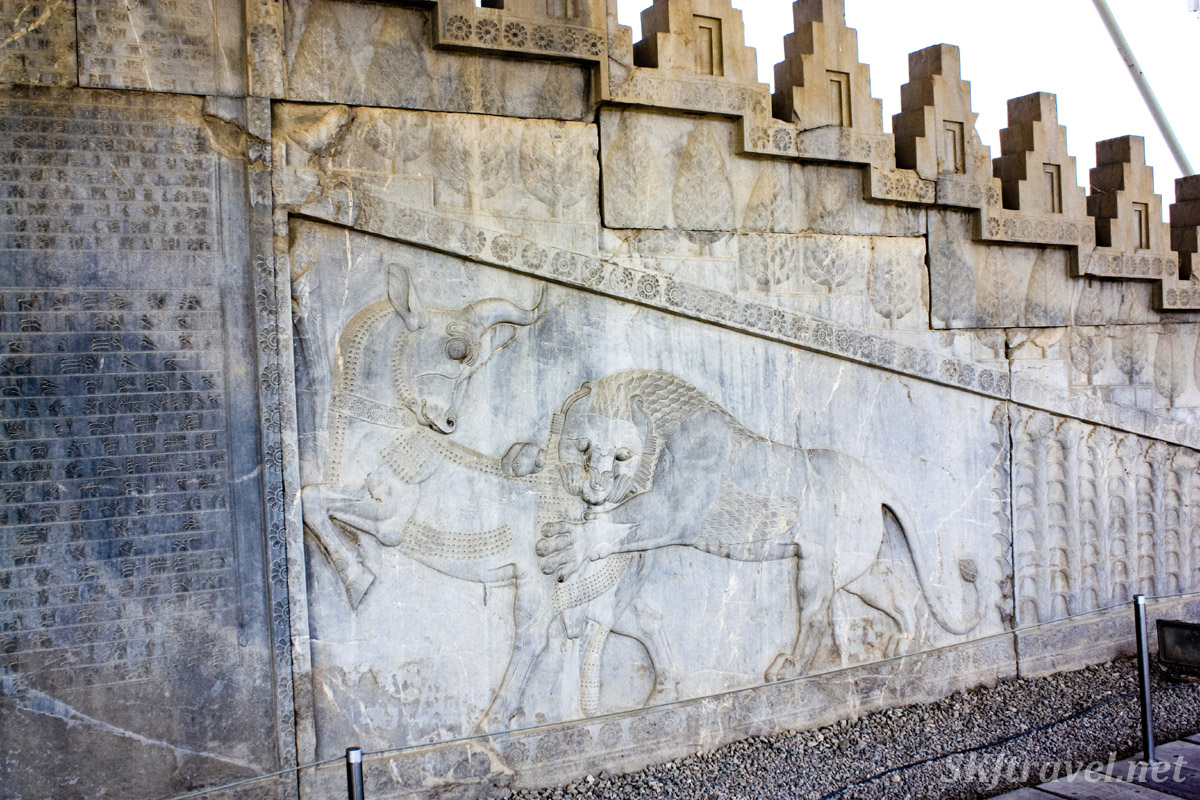 A short drive away is the necropolis containing the tombs of several of the Achaemenid kings, including Darius the Great and one whose name I love to say, Xerxes. The Persians were Zoastrians in religion, and a small number of practicing Zoastrians still exist in Iran today. Their ritual for burying the dead was different from any other religion (and actually, the way I personally would very much prefer to be dealt with upon my death). The tombs all have a high shelf in front of the entrance. On this shelf the body was left in the open air to decompose naturally, the flesh to be carried away by various birds and insects. Only after the bones were completely picked clean were they gathered and buried in a simple fashion in the tomb. Later we would see towers for this ritual that were still in use until 50 years ago. But the ancient kings received little more fanfare than any other person at death, excepting of course (the rather large exception) for the elaborate facades carved into the rock cliffs for the tombs. 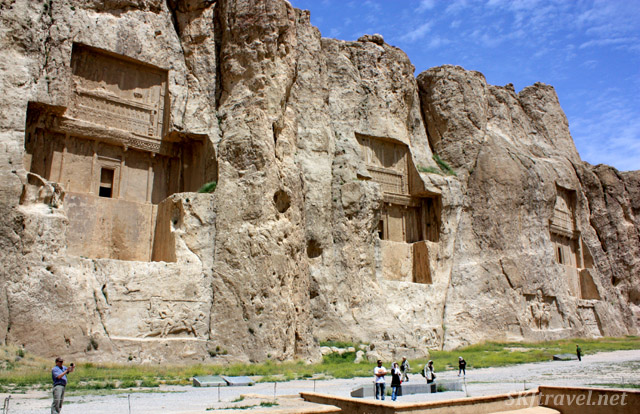 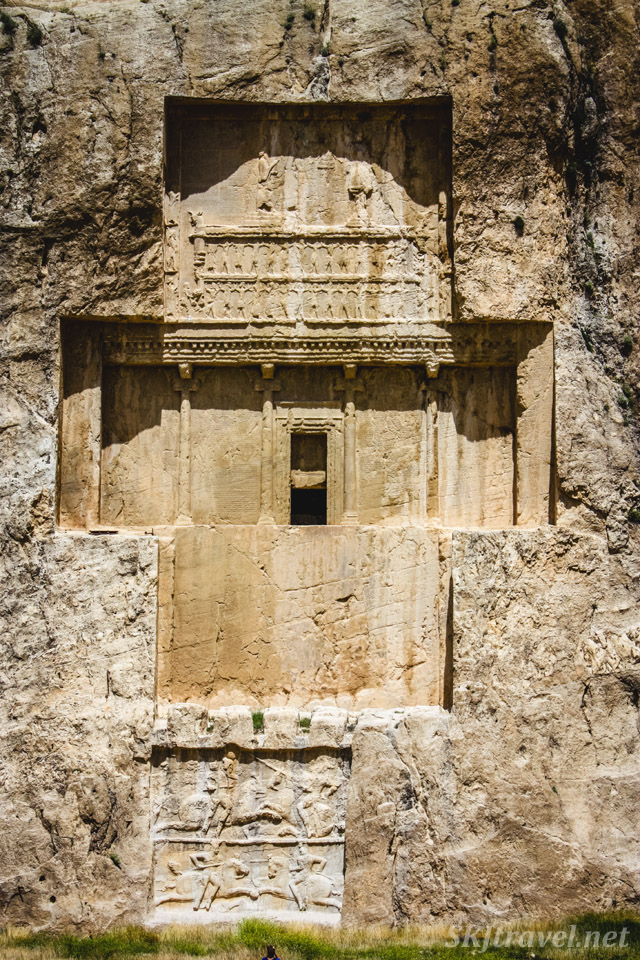 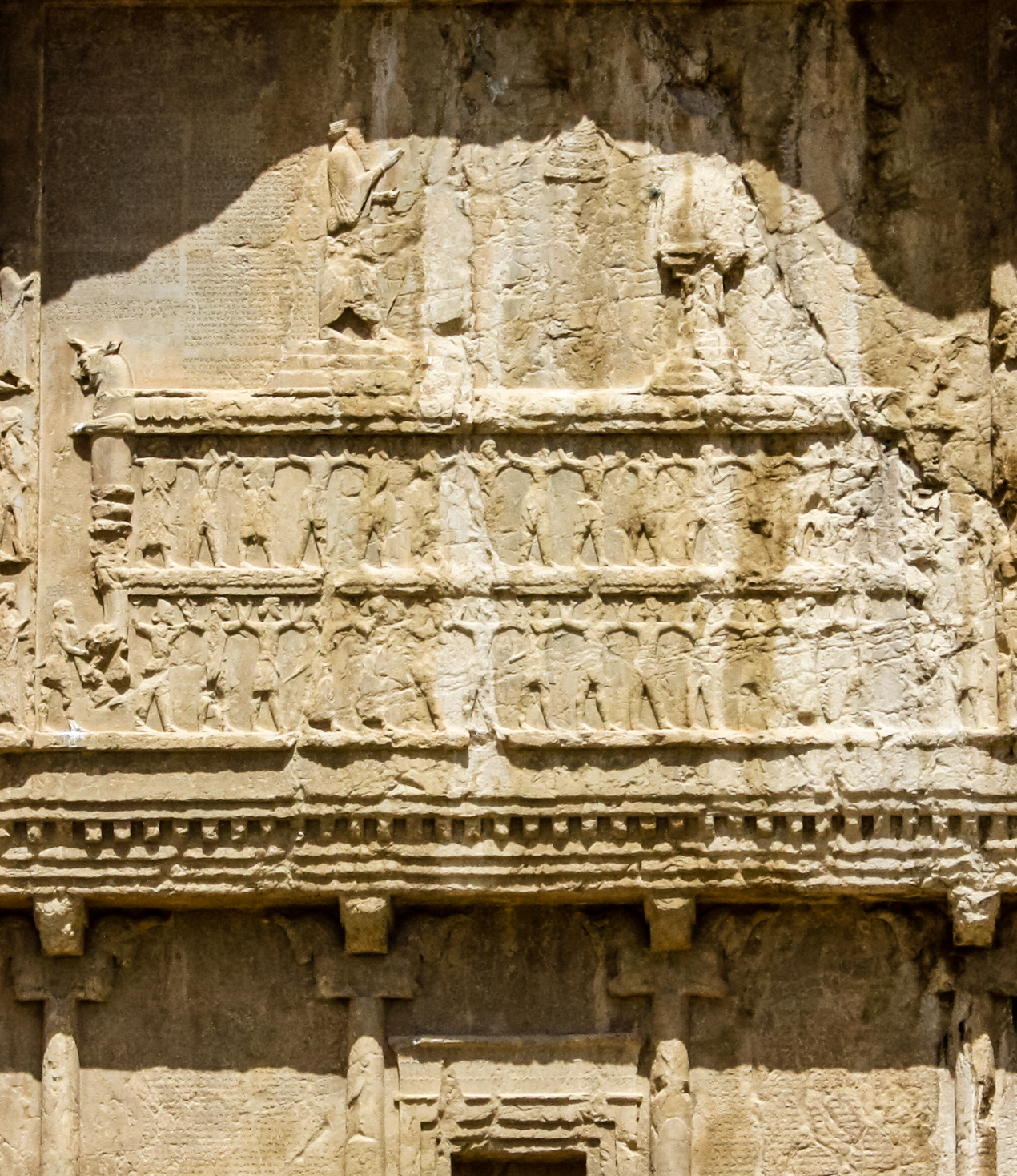 I really liked these tombs, known locally as Persian crosses. I’ve always wanted to see the Valley of the Kings and the ancient tombs of Egypt, and this felt like being given a small taste of what that might be like. One thing I like about the ruins here and around Bishapour is the evidence of the sudden flight of the people whenever they were conquered by an invading force. In several places, large rock carvings or reliefs had begun and were abandoned suddenly and never finished, such as this large blank space which had been prepped for carving and hastily left behind. Somehow to me this gives the ruins some sort of kinetic energy ... evidence of motion. 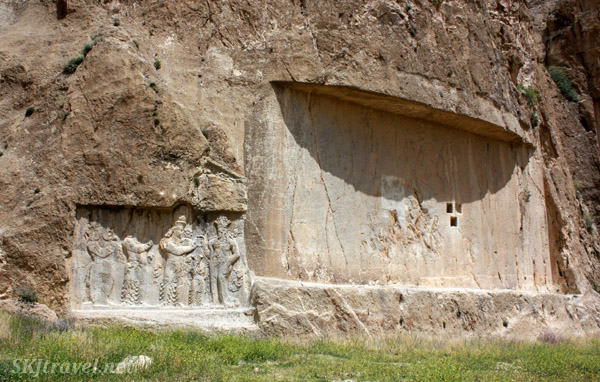 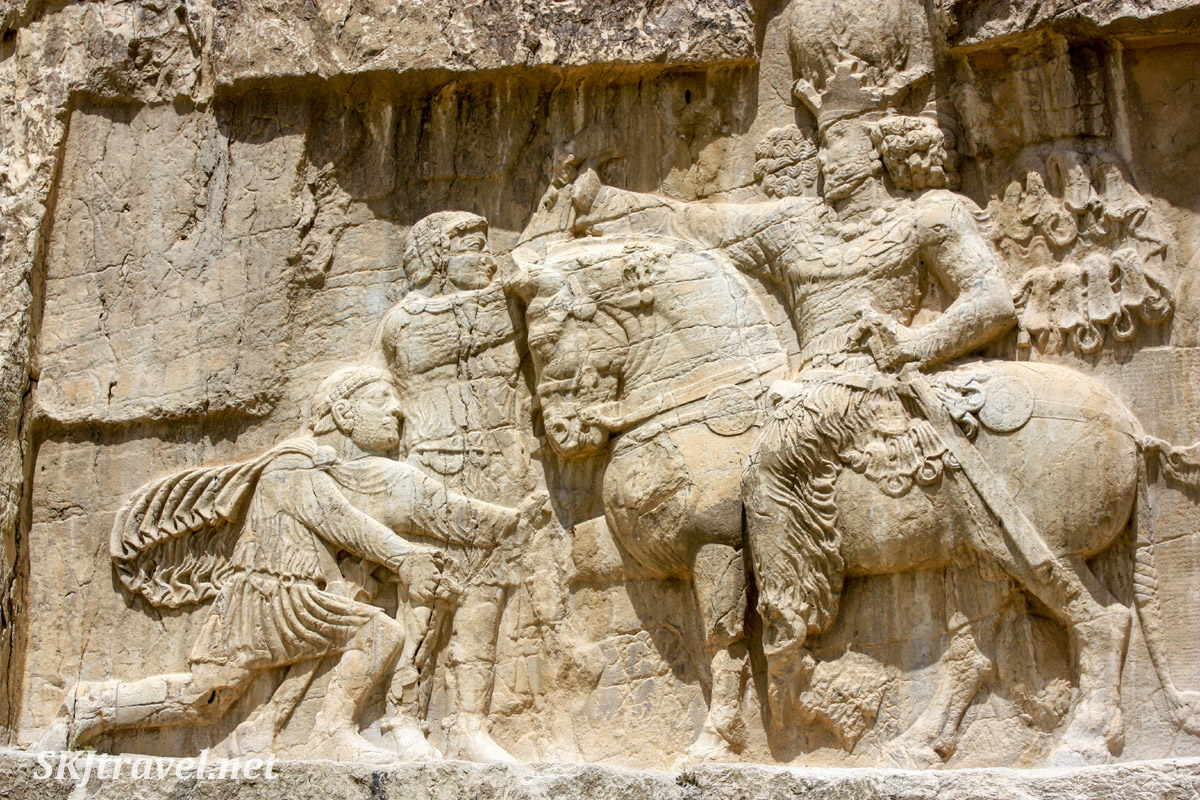 We ended our day at the humble ruins of Pasargadae and the tomb the revered king, and founder of the Achaemenid dynasty, Cyrus the Great. Reza was keen to have our photo taken here and published on the blog. I think the monument to this legendary founder is a source of great pride to the Iranian people. Even Alexander the Great spared the tomb while wreaking havoc on the rest of the area and destroying the cities. He actually greatly admired Cyrus the Great. Sometimes it's known as the tomb of the mother of Solomon because the caretakers of the tomb lied to the invading Arab armies who would have destroyed it, and told them it belonged to a figure in Islamic history, King Solomon's mother, and it was therefore protected. Pretty clever of them, eh? 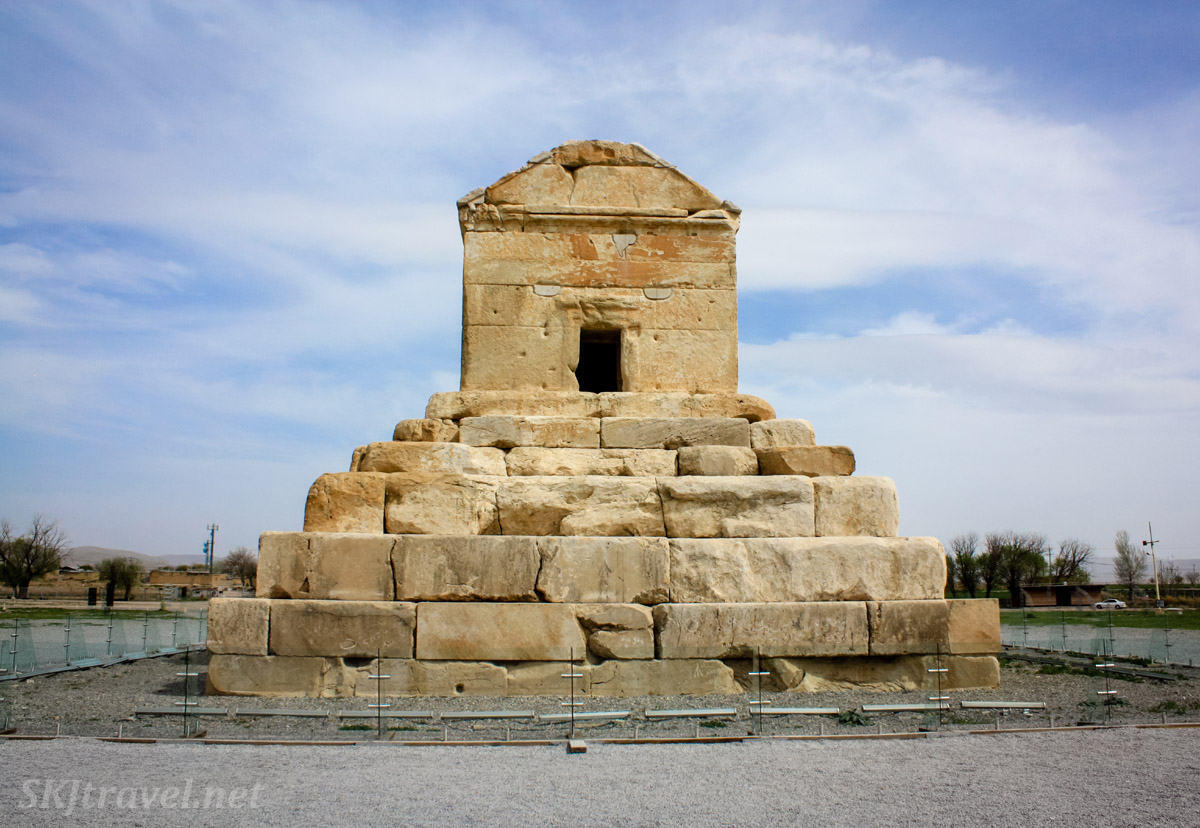 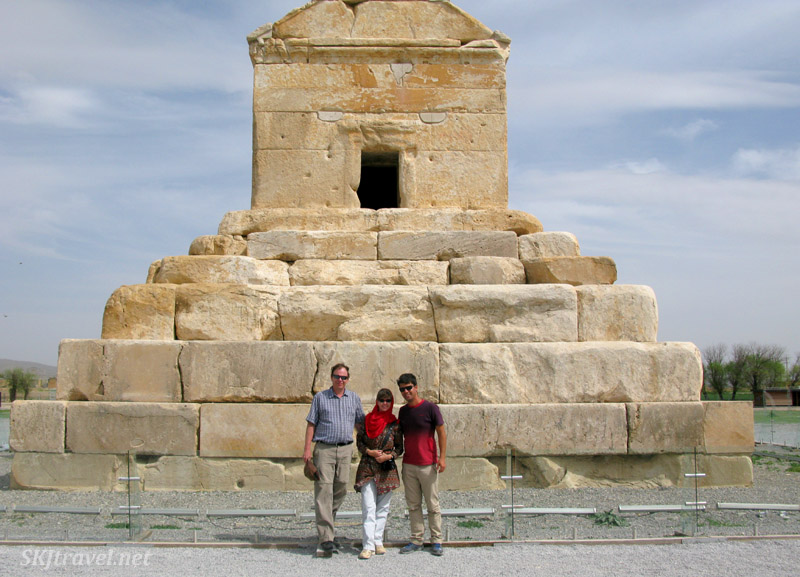 The pittance of remains of the city of Pasargadae were somewhat less than impressive except for the very worthy contemplation of the fleetingness and relative insignificance of human achievement in the face of the long stretch history, which lies ultimately at the mercy of far greater powers than humanity -- nature and weather and time. Erik and I were both thinking the same thing while there – Shelley’s famous poem (one of the exceedingly few poems I ever bothered to memorize): “'My name is Ozymandias, King of Kings, look on my works, ye mighty, and despair.' Nothing beside remains. Round the decay of that colossal wreck, boundless and bare the lone and level sands stretch far away.” 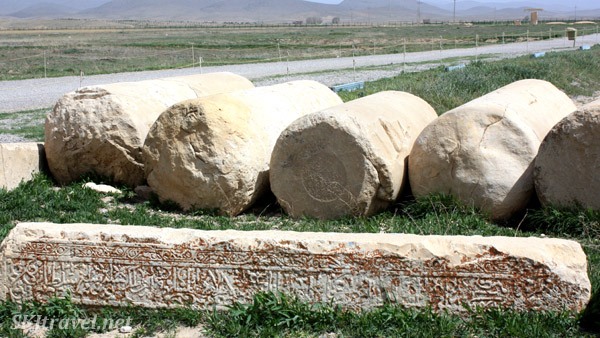 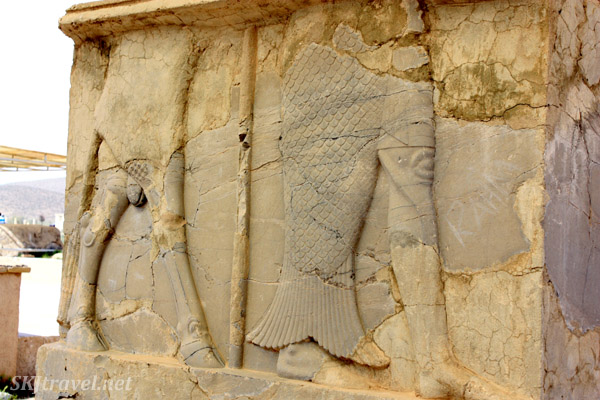 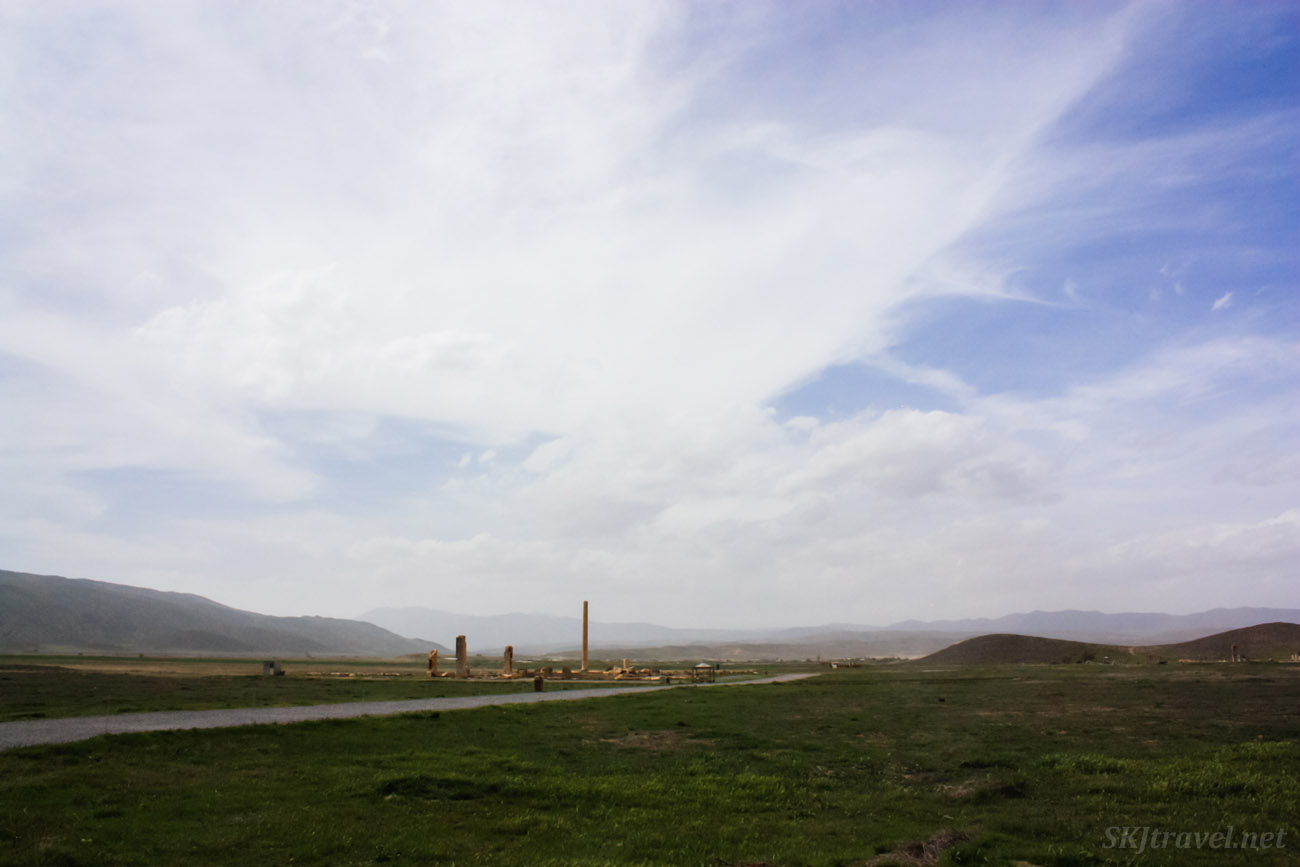