I’ve been in enough medieval cities or the remnants thereof throughout Europe to love these old, labyrinthine parts of town and to feel a sense of nostalgia for them, so whenever I get back to one it’s like reuniting with an old friend. Barcelona has a lovely quarter, known as the Gothic Quarter (or Barri Gotic), of narrow, curvy alleys and courtyards of varying sizes. Today is Saturday so it was packed with people except for the alleys that were utterly void of people ... just like everywhere as a tourist, there is the beaten and the unbeaten track, and it always amazes me the proximity of one to the other. But thank goodness for the latter. Always so refreshing. The Barri Gotic is a big enough quarter that having not paid a wit of attention when we entered and then wandered utterly without aim, when it came time to head for home we were a tad lost. Yay. I love being lost. Except when I’m really hungry or I really have to pee. Here are some scenes from the quarter. The giant bubble guy was pretty fun to watch with the children all trying to catch the bubbles. 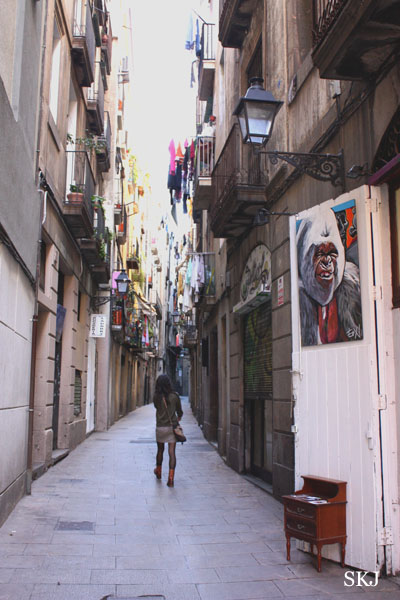 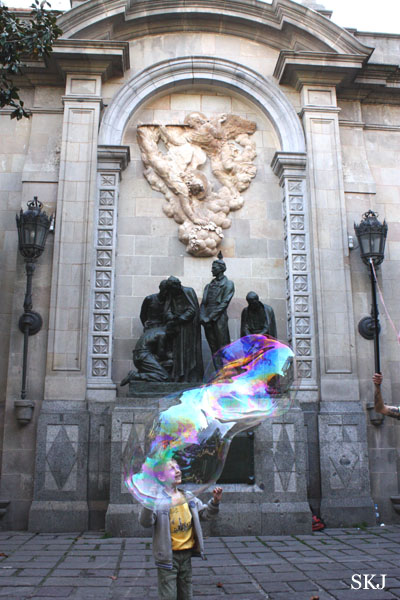 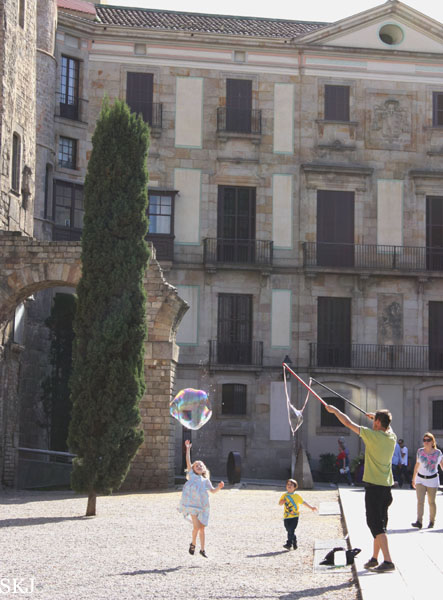 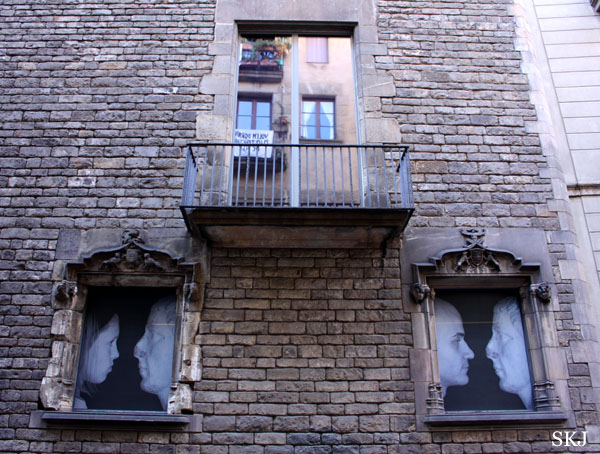 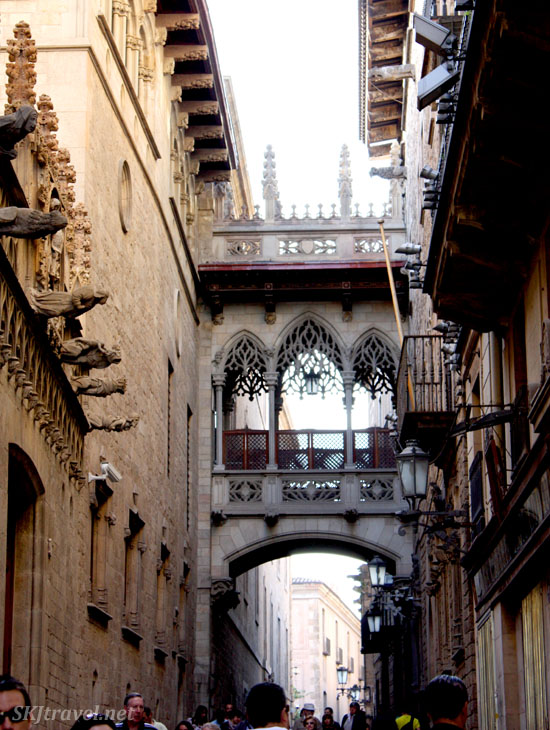 Parts of the walls are very interesting and you can see the centuries of continual building over and on top of previous structures. The oldest parts of the city are several columns dating from 1st century BC. They are preserved in a glass shelter and by now are far below the general street level. Here is a photo that somewhat shows this stratification and hodge-podge, as the pigeons are perching in an area with several different layers of building materials from different time periods. 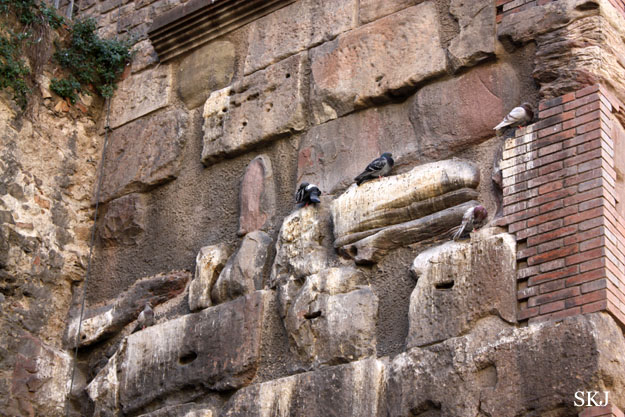 Oh, and we’ve moved digs. We spent the morning and afternoon with our most agreeable friends/hosts of the opulent flat and have now left them to a couple quiet days to themselves. We’ll see them again tomorrow for dinner. So after checking into our new budget hotel (yes, it’s quite a drastic change) we went out for our meander. Along the way we also stopped in a Dali museum. Quite a nice one; we’ve been to several around the world. It was fun to see some photographs of Dali standing at some of the Gaudi places we’ve been to. So, my brilliant theory that Dali was influenced by Gaudi was proved correct. I’m sure no one else has ever had the insight to put the two together before, and I can assuredly claim and publish this mind-blowing theory as my very own. ;-) On the right, an interesting Dali creation of a 3-D scene of wooden figurines. 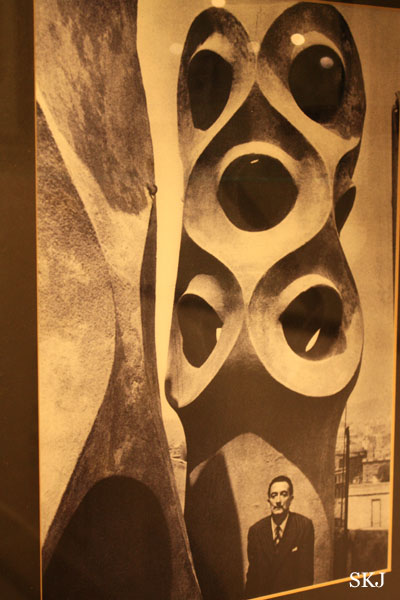 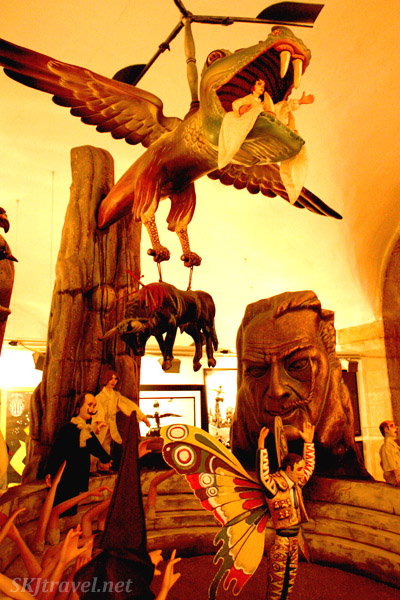 I guess I’m narrating backward. Now I will tell you about our morning still spent with our friends (the 5th party member flew back home this morning), so was just 4 of us. We took the subway to a flea market and walked through briefly, then walked through a very pleasant part of town with lots of open park space and an arboretum. Erik was extremely pleased with himself when he managed to jump up high enough to pluck an orange from the laden trees in the park. His pleasure turned sour, literally, after tasting it and puckering up. Thems not eatin’ oranges. 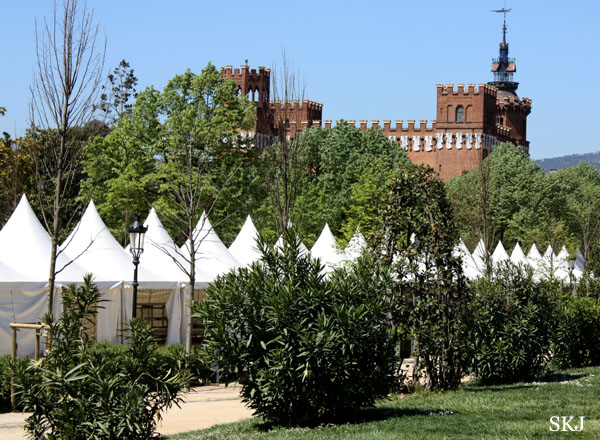 There was a beautiful arc de triumph, like ones you’ll see everywhere ancient conquerors patted themselves on the back for a successful (or at least perceived successful) military campaign. This one was made of red brick, however. And again more beautiful scenes of the city. (I ran out of camera battery.) I think my friend has broken a Guinness record for number of stitch photos taken in a single location or a single week, stitching together numerous panorama shots. I will have to steal some from him and post them to you.

Somehow night has descended again with surprising rapidity and it’s after midnight already. Have to rest up for my birthday tomorrow. So off to bed I shall go and probably sleep late.