Barcelona, Spain: Museums of the Masters

Piece of cake taking the train to see Dali in the nearby town of Figueres. Silly me, my favorite travel sweater I didn’t fasten very well to my little purse when I was in the train station and just before boarding the train realized it was gone. So very sad, I decided to trace my steps backward as far as I could before the train came. The first place I went was the little café where we bought a pastry for breakfast. And serious joy when the lady produced the sweater from behind her counter. Some nice soul had turned it in. This is the second time I’ve lost it and had it returned. Perhaps that means it’s really ugly and no one would want to keep it if they found it. Ha. Fine by me. My sweet little sweater back in my possession. Perhaps I should keep Erik’s wallet in its pocket, then it would always get returned when it goes missing.

So anyway, the Dali museum. Lovely. Lots and lots of small paintings, drawings and jewelry. Yeah, I had no idea about the jewelry. He said that what he wanted to do was buck the idea that jewelry-making should have consideration for the cost of materials and the nature of its use (i.e. wearability). There were definitely some interesting pieces, including a beating heart of rubies. Here is some Dali jewelry. The eye is perhaps the most famous, and the only souvenirs I brought home from Barcelona were a t-shirt with that image on it and a funky Gaudi-designed tea cup. 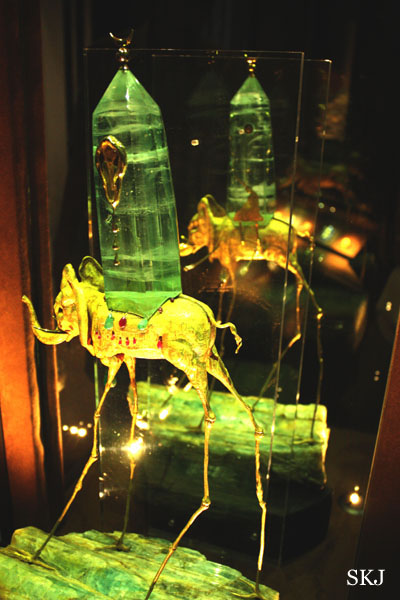 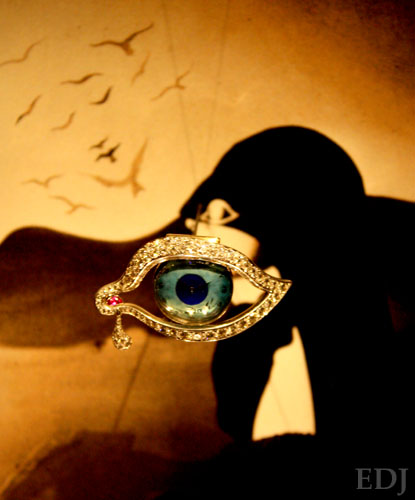 Valentine's Day jewelry, no? Nothing says romance like a brooch of skulls. 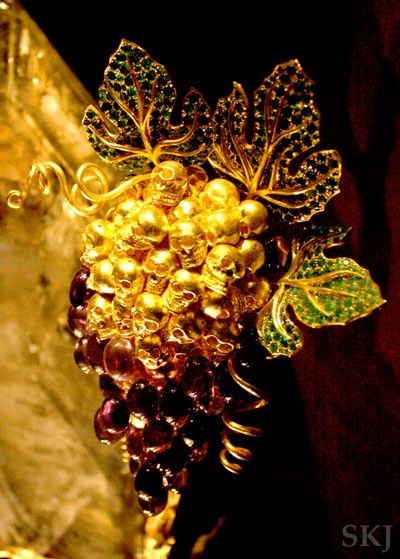 Below are a couple of my favorite paintings. 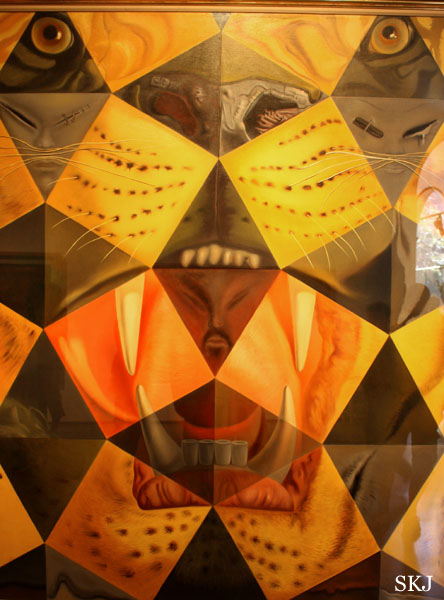 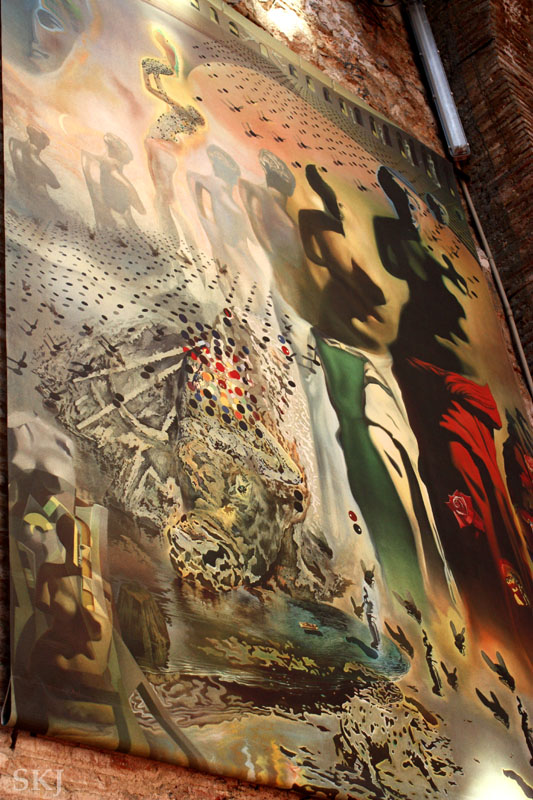 And here we have a ceiling fresco in the Palace of the Wind ... kind of like a Dali Sistine Chapel, ha. Maybe not such a benevolent heaven here ... we are about to be stomped on! But in a joyous manner, claims Dali. The feet in blue are his (notice his moustache at the top), and the feet in red his wife, Gala's. 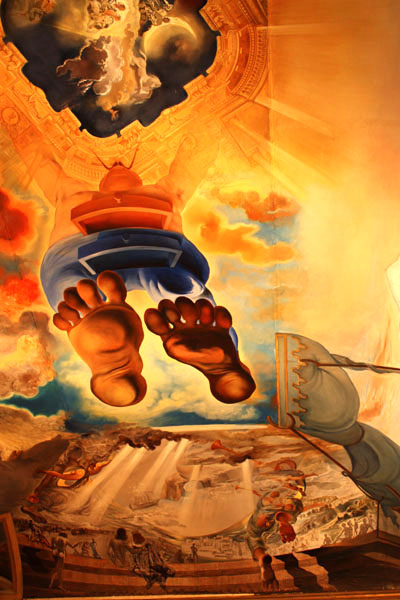 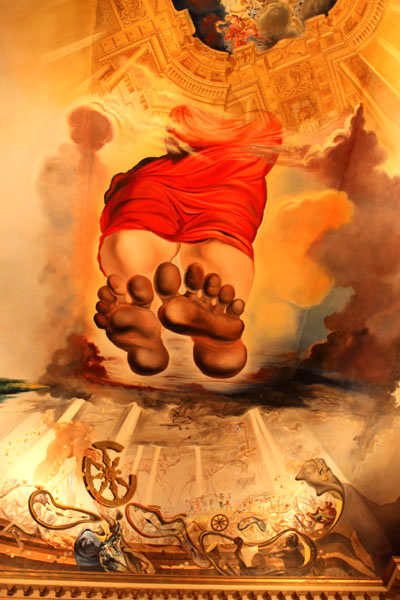 And a fun stairway in the museum. Very Dali-esque when you understand his flamboyant personality and tireless self-promotion, his indulgent belief in his own genius. 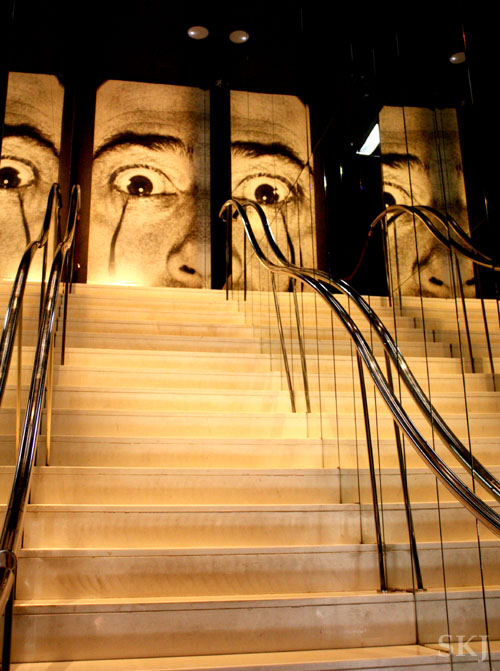 This is the main courtyard as you enter the museum. You could put a coin in a slot on the automobile and music would play from the front grill. There were several displays throughout the museum in which you could contribute a coin to watch it move or play music or something. Erik naturally couldn't resist, and only he and a British kid were (a) observant of the coin slots and (b) curious enough to slip in the coins. 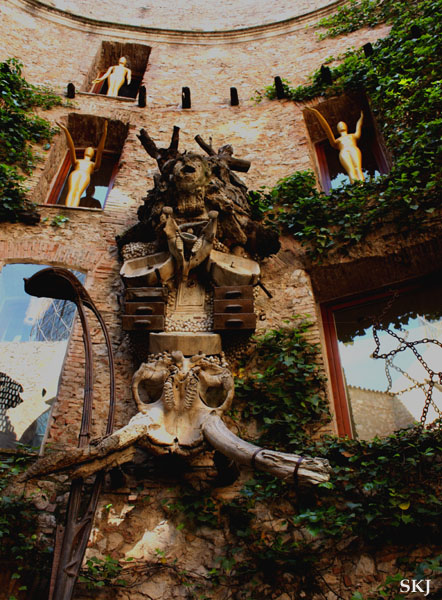 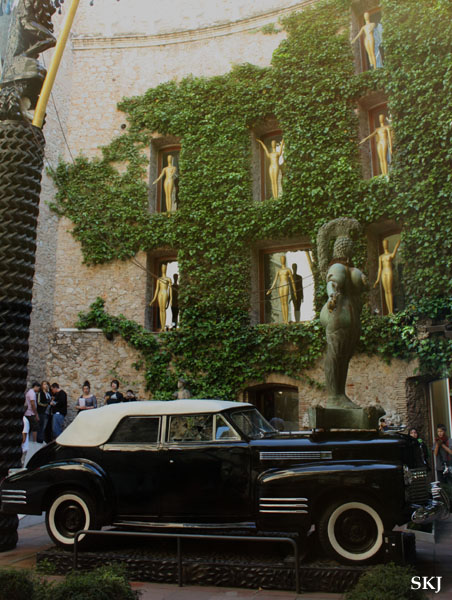 Dali had a thing for eggs. The top of the Figueres museum is festooned with them, and we would see them a few years later sprinkled around his home in Port Lligat. 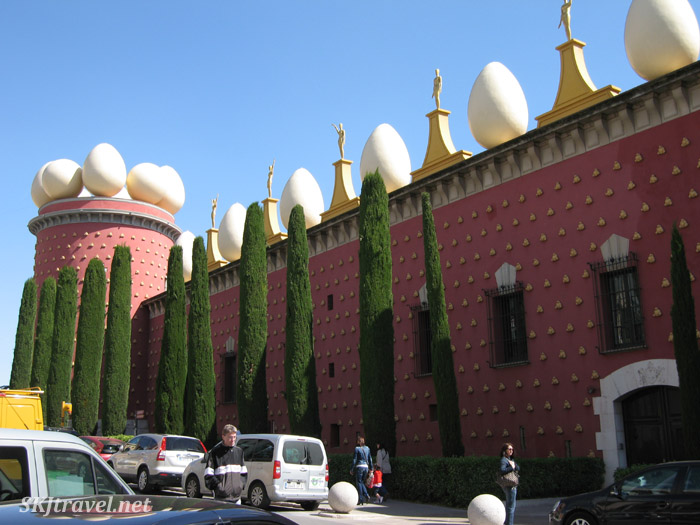 We are now sitting back in our hotel room drinking the array of liquor we just bought and Erik is trying to convince me that the absinthe is complementing the Moritz beer. I’m not willing to see if I agree. I went to an absinthe tasting at a conference in San Francisco (travel writing/photography/food) just for the novelty of it, and the maker had won awards for basically the best in the world. Other than that, I’m not a fan. Shortly, we will delve into our 2-euro bottle of red wine…. “la mancha.”

But back to Dali. The museum building is very interesting also in and of itself. There weren’t really any of his super famous originals, but I thought it was nice to see so many other things (better collection than the one in Barcelona we saw the other day). And we’ve seen a number of originals in other museums in the U.S.

So we took the train back to Barcelona and went to another Gaudi museum, the Batllo, a private residence he designed. (I don’t have a guidebook, so if I misspell places, forgive…. I gave up collecting brochures a few years ago and now it’s just habit not to pick them up.) This was probably the most expensive admission fee, but it is supported primarily by this fee as a private institution, and is totally worth the price of admission. When we first entered there were a lot of other people and it was hard to take any worthy photos without hordes of humans. But by the time we finished walking through the whole place, it had cleared out a lot so we went back through the whole place again with much more serenity. Yep, it’s worth going through twice. At least in our opinions. Also interesting in the audio guide (automatically included) were many quotes from Dali about Gaudi. More Gaudi photos out of my collection of roughly a gazillion. 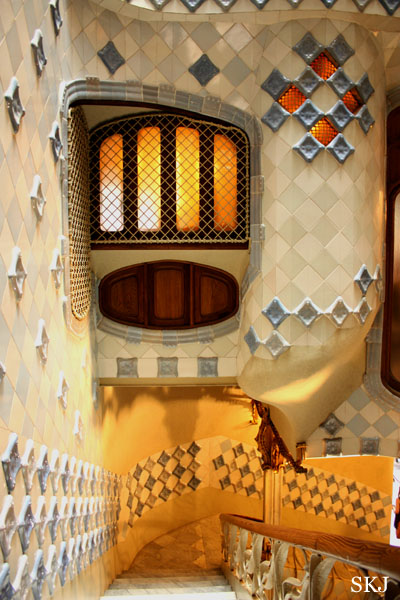 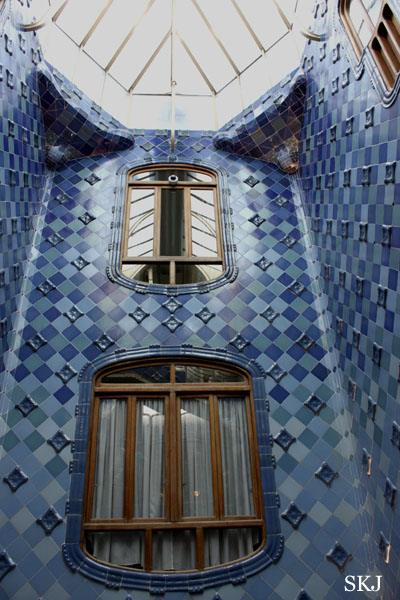 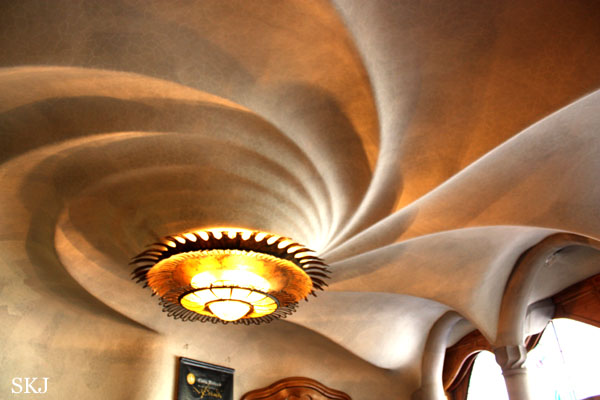 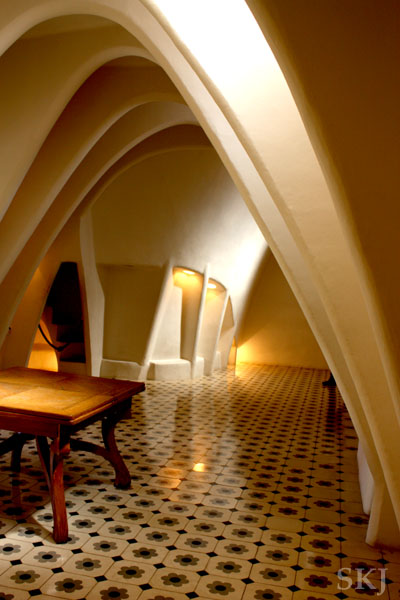 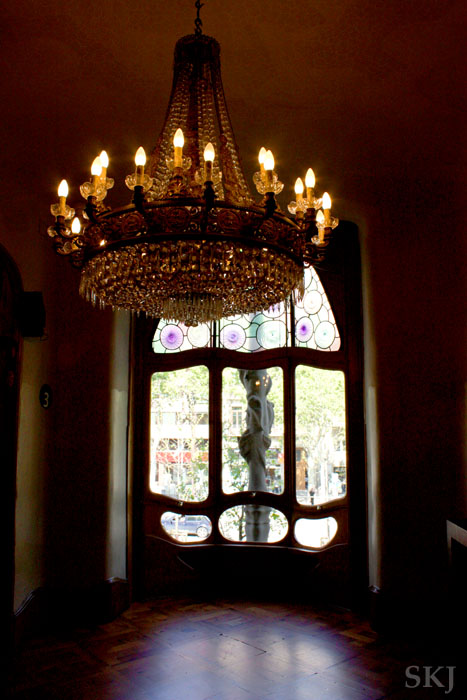 Gaudi considered rooftop landscapes to be a very important feature in his architecture. They are quite, quite magical. La Pedrera was unique for its smooth wooden sculptures on the roof ... these tile mosaic ones at the Batllo are more iconic of Gaudi's style. 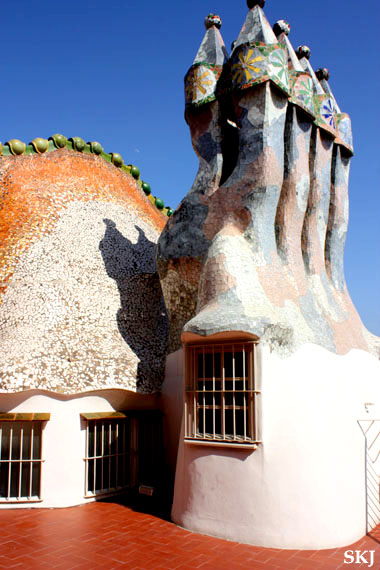 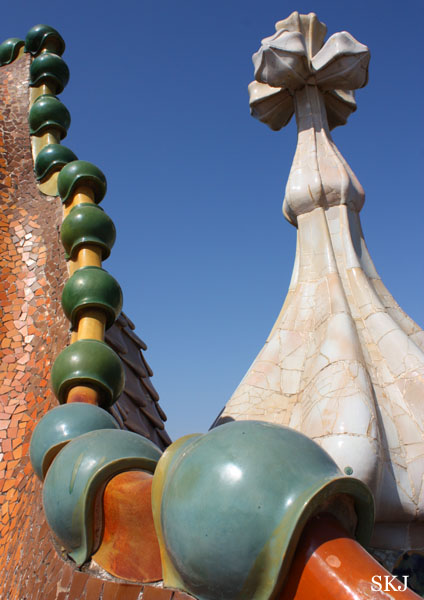 And finally, The Batllo from outside at night. There were several professional (presumably) photographers gathered around outside with their camera sitting on tripods on the sidewalk. Getting nice lighting I'm sure. But I just snapped these in passing. You still get the idea. 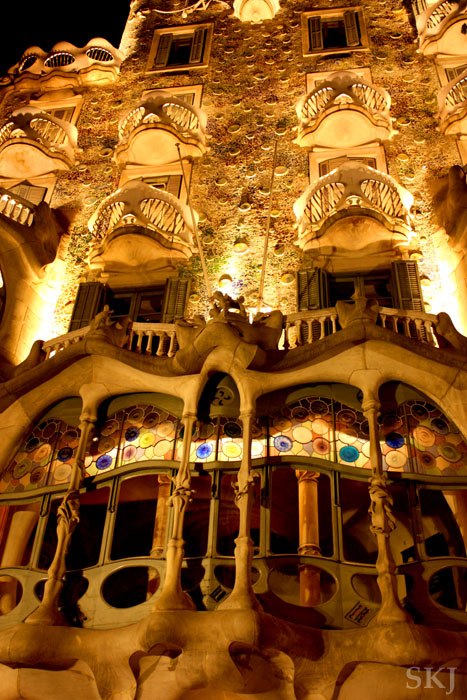 Meandered home. Found a nice out-of-the-way place to have a reasonably-priced beer (impossible on the Ramblas) and yummy crepes. Mine was mint-marinated chicken with carrots and mint yogurt. Mmm. So now here we are back in our room. Erik’s just gone down to reception to ask if they by some odd chance have a cork screw so we can sample our 2-euro wine and see if it’s worth bringing some home.

Hard to believe tomorrow is our last day already. Erik has returned with a corkscrew. “It seems drinkable,” he says. “You can see the legs on the plastic. That’s the sign of a good wine.” We are drinking from the tiny opaque plastic cups provided in the bathroom of our super budget hotel.