As usual, once I get home and can see my photos on a real computer monitor rather than my tiny laptop, I find a lot more that I like or illustrate well places we visited. Also, thoughts about a place settle in over time after you return home. Or you find new sources of info (e.g. the Gaudi book we bought). And so I present the standard post-trip musings and extra photos.

So what does one such as I leave Barcelona with? I’m almost sorry to say it, though I don’t know why I should be other than it’s surely one of the most obvious and repeated sentiments, but the architecture of Gaudi leaves a rather intense impression on me. I came to Barcelona prepared and excited for Dali, but discovering Gaudi has been pure epiphany. One massive difference between the two artists is their personal bravado and self-promotion. Dali being a shameless self-promoter and liberally sprinkling the world with his thoughts, theories, artist processes, etc. Gaudi, on the other hand, never wrote a single book espousing his architectural theories. He died living the humblest of lives, a virtual pauper, inside the Sagrada Familia overseeing its construction. Fortunately he had acquired many “disciples” before he died who were devoted to him and his work and wrote down the things that Gaudi talked about. I thought it was kind of amusing that in the audio tour at Casa Batllo, there seemed to be more from Dali speaking about Gaudi than Gaudi speaking of his own work. Somehow appropriates these two Barcelona personalities nicely.  Here are a few more photos of Gaudi, with some quotes from a book we bought at one of the gift shops as taken down by his “disciples.” Oh, and I feel silly, but I didn’t even know it, from my second blog post at the end there is a photo labeled “random night scene.” This in fact is a Gaudi building, the Casa Calvet (built 1898-1900). (I rest the defense of ignorance on my oft-mentioned lack of guidebook.)

The best way to view Gaudi's Sagrada Familia is, frankly, on a gurney, if you can procure one to lie flat on your back upon and have someone wheel you around. My neck got a serious crimp in it from craning backward to marvel at the ceiling and high walls. Gaudi said, "The essential quality of a work of art is harmony. In sculptural works harmony derives from the light that gives it relief and decorates it." Just take a moment to look at the lighting.... all the different windows, how light comes in differently through them, how different spaces are illuminated and contrasted. Gaudi liked mixing electric light and sunlight for the best effects. Even the organ pipes are placed with consideration for the nature of the light reflected off them. 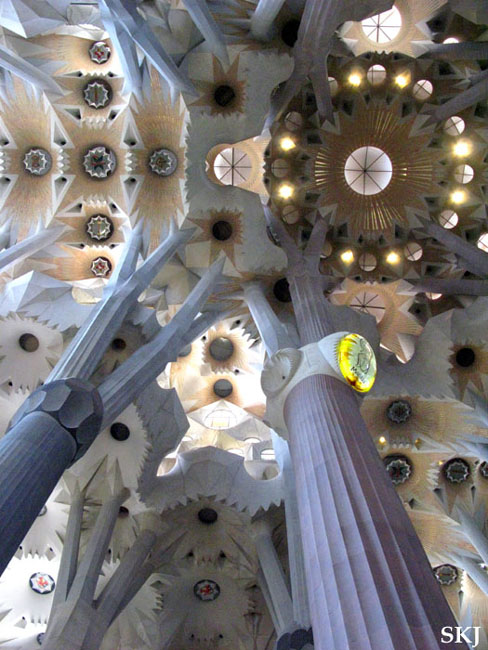 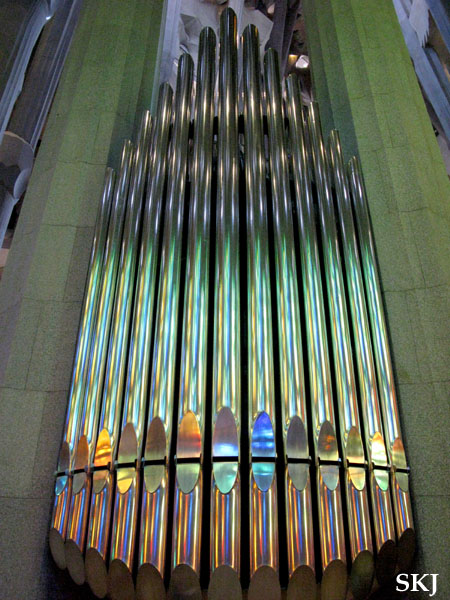 The hallmark of Gaudi architecture is its organic forms. Perhaps one of the most famous things to come from his lips was this quote, "The great book, always open and which one must make every effort to read, is the book of nature." Further, he espoused, "Architecture creates the organism and that is why it must have a law in accordance with the laws of nature; the architects who are not subjected to these laws create a scrawl instead of a work of art." Mushrooms are often an inspiration to his forms. In this picture, looking up, I totally think of the underside of a forest fungus. 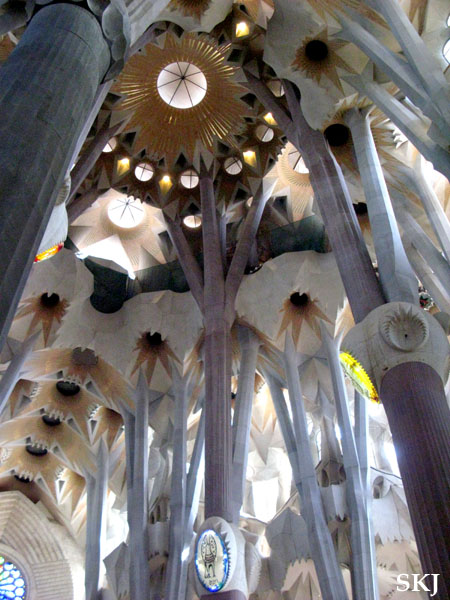 Gaudi began work on the Sagrada in 1883 (yes, 1883!) and it is not projected to be completed until I believe 13 years from now. Hence the perpetual presence of cranes and scaffolding. "The form of the towers," Gaudi said, "vertical and parabolic, is the meeting of gravity with light." 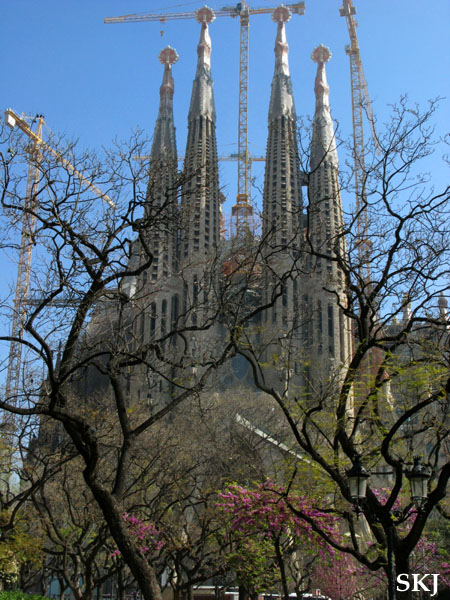 A spire seen from the observation tower (so one is already very high up when looking further up the spire in this photo. Inset detail of the mosaic on top. 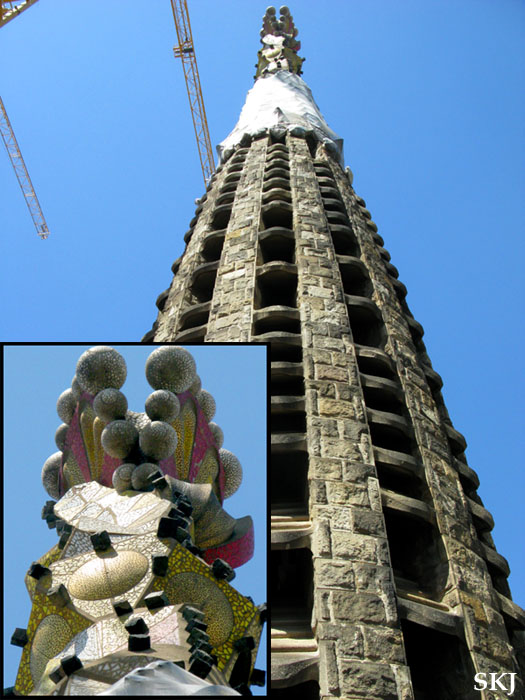 And now, the obligatory photo from Parc Guell, slight variations of which you'll find in every guidebook and photo album of Gaudi architecture. There are several tunnels or grottoes like this throughout the park (as in the second photo). 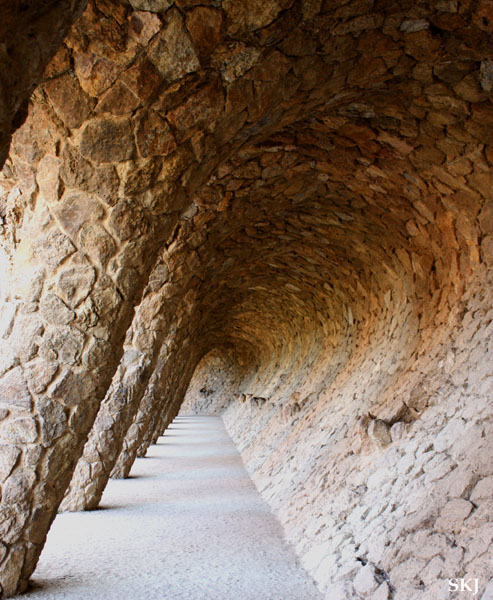 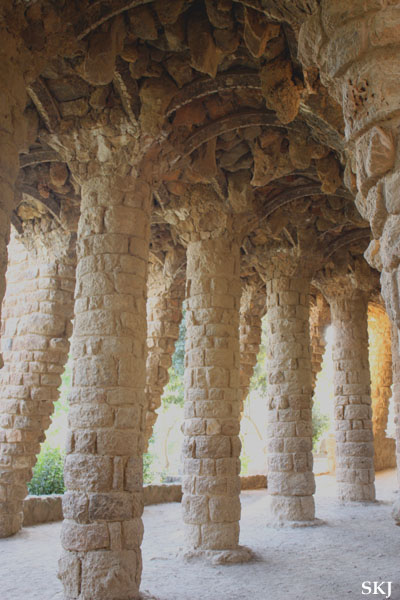 This is in the Dali museum in the Gothic quarter. I tried very diligently to get the reflection of the two electric lights right inside Dali's nostrils. ha ha. Really, I did. 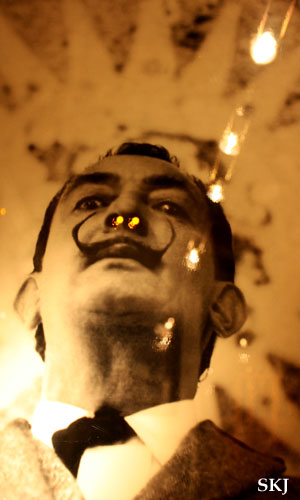 The Gothic quarter (Barri Gotic) was an exemplary Medieval labyrinth, just the type of thing I love. One thing that was unique to me here that I don’t recall seeing much of a similar nature elsewhere, at least not nearly to Barcelona’s extent, (besides the wealth of street art mentioned earlier) was the tiles along many of the alley walls, particularly at the corners. Several corners were marked with tiles forbidding the entry of horse carriages. 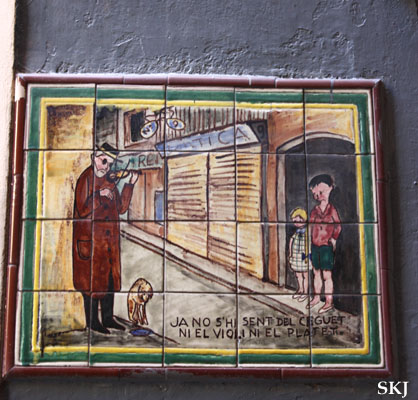 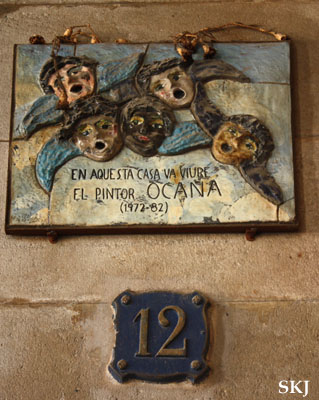 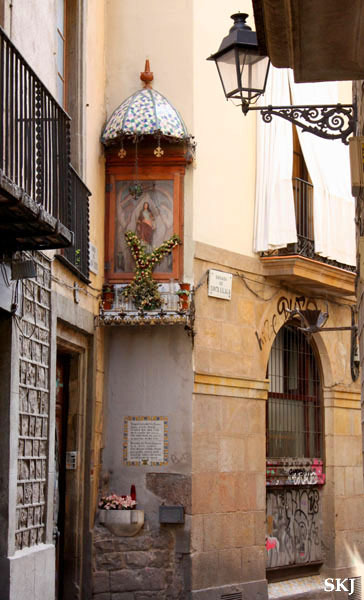 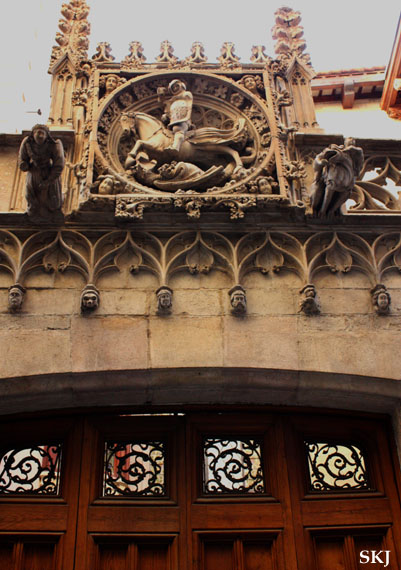 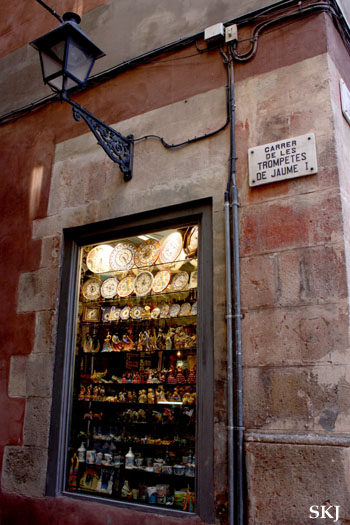 A sinister bubble stalks and innocent child....  And more playfulness I wish I could join -- chasing bubbles. 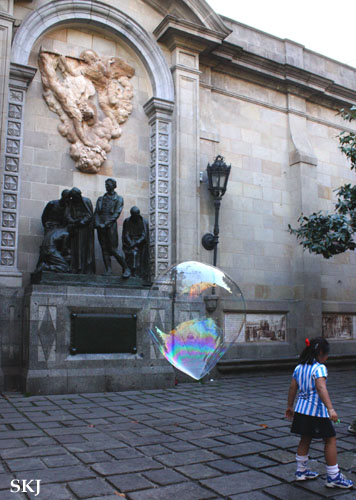 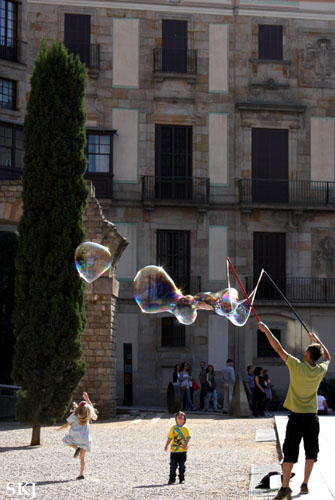 This botched self-timer photo just cracks me up. In our devotion to Irish pubs, we of course stopped in a couple on our way meandering through the Gothic quarter. Decided to try a self-timer here as I was drinking my birthday beers. My face looks like some sort of evil clown, and I like the calm dude on the wall in the back while we're in motion, and the little trail of light off Erik's ring. 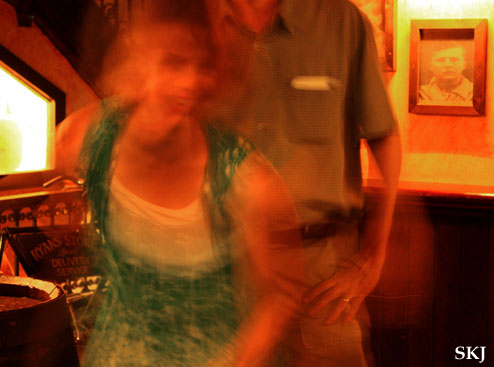 Our favorite landmark along La Rambla was a Chinese dragon with an umbrella beneath it. As it happened, the alley that our hostel was on lay katty-corner to the dragon. Turns out this building was once an umbrella factory. A clue to how lovely the weather was is to notice how blue the sky is in so many of the photos. 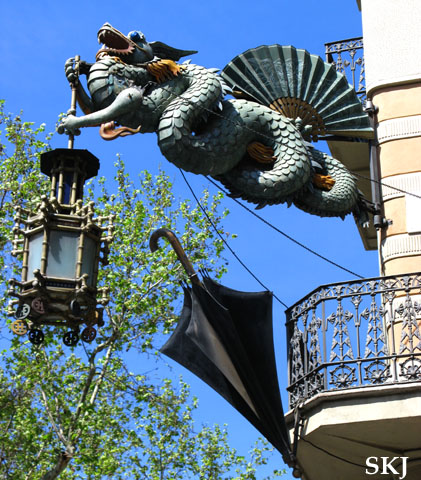 The large city park, below. Notice the orange trees from which Erik plucked the not-so-yummy fruit to eat. You know, I could probably make a photo album titled, "Erik Eats Not-As-Yummy-As-Expected Food Around the World." I'll spare him the orange photo here. (I always snap a shot of his gastronomic adventures... many funny faces.) But right off the top of my head I can think of cactus fruit in Tunisia, octopus on a stick in Greece, these oranges, and other images I can't even place their locations. 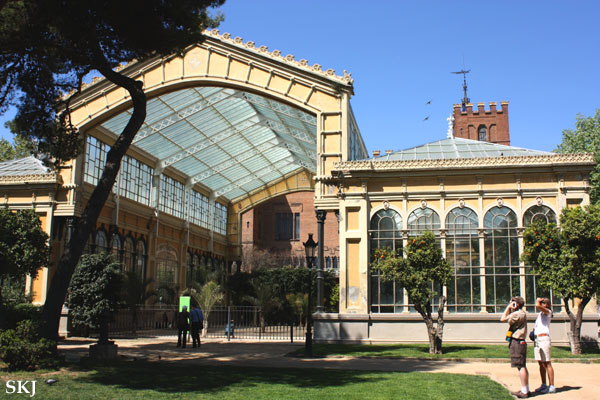 There is nothing Barcelona-esque about this photo; I just like it. An escalator up to a museum. But somehow it makes me think of some sci-fi, sort of Orwellian, scene with people moving about like drones (how they're all neatly paired on the escalator). I like the dark outline of everything but the silver handrails. Probably only me who likes it, but here it is anyway. 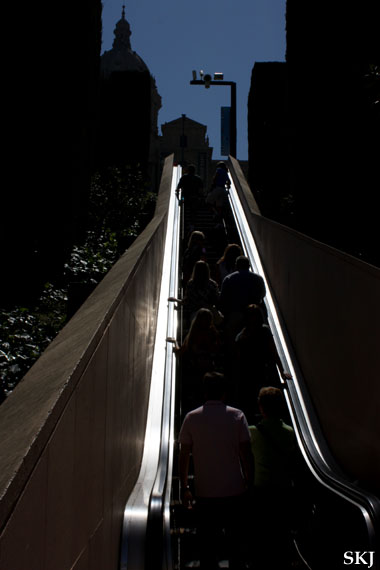 Geographically, the landscape in which Barcelona has evolved is lovely, with the blue water of the Mediterranean along its one edge, and being sandwiched between Montjuic and Mount Tibidabo. Lots of cities are surrounded by or sandwiched between hills, but Barcelona seems to take particular advantage of the two high points across from each other to regale one with the panorama of itself. I don’t think I’ve ever seen so many overlooks and panoramic views of any one individual city as Barcelona (also offered from tower of Sagrada Familia). I think it gives one the sense that they know the city as a whole, not just pedestrian views of specific quarters of it or main streets and plazas and courtyards. With the exception of Wroclaw in Poland, and a few small Tuscan towns, I can’t offhand think of any city that I can picture in my head so clearly and definitively with a bird’s eye view. Looking down from Montjuic or Tibidabo (beer in hand, of course, at one of the cafes) you think, "This is Barcelona." An interesting contrast, though, is that my vision of Barcelona is a very horizontal one, that is to say a wide landscape/panorama orientation. Yet my photos of individual places within Barcelona are 95% vertical, or portrait-oriented.

So here is one of my few landscape-oriented photos, from inside the cathedral at the top of Tibidabo (where the amusement park lies at the foot of the cathedral). I liked the lights that hung down from the ceiling. 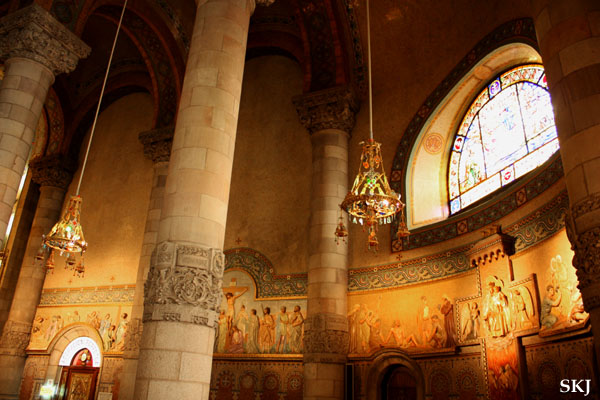 I don't really have any photos of the lovely beach, as we only walked along it at dusk and into night. But here's a photo from the big market along the Rambla. Now that's FRESH sea food! There were piles of live crabs, too, with their pincers bound together. All crawling over each other in a creepy mass. 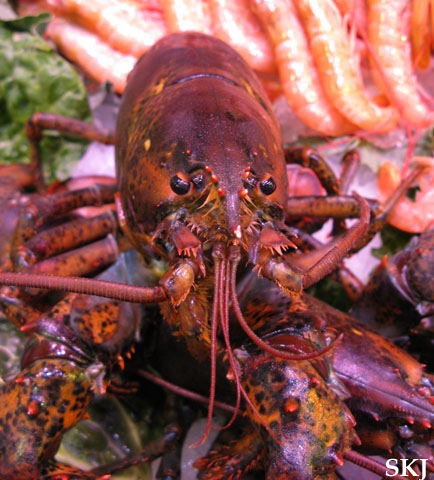