I’m glad Isaac warned me that armed guards would be walking around my house from time to time, or it would have freaked the hell out of me this morning as I was sitting on my couch shoveling in fistfuls of ibuprofen (hoping to restore some functionality to my sore arm) to see a guy with an AK-47 walking straight toward my window.

One of the camels that passed me the other night in the dark seems to have developed a crush on me. This is very disconcerting. I ran across him after dinner, strolling through the public thoroughfare among the crowds of Easter Monday revelers. He walked straight up to me and put his head right next to mine. I was afraid he might try to bite me; I kept trying to move away, and he wouldn’t have it. Some guy had been videotaping the camel before I came along, so he kept recording while I was ducking and dodging the camel love. I tried to walk quickly away, but I was followed at close range. The videographer was laughing hysterically, and I’m sure he has truly hilarious footage. I laughed as best I could, but it was nerve-wracking having this creature latch onto me.

Some pics:  Another plant along the road to my house. The cat’s eyes seeds I mentioned in the last post. The lawn outside the restaurant with carnival gear. Check out the miniature electric swing for the kids, so hilarious. And the two vervets prowling the grounds. Was a fun atmosphere. 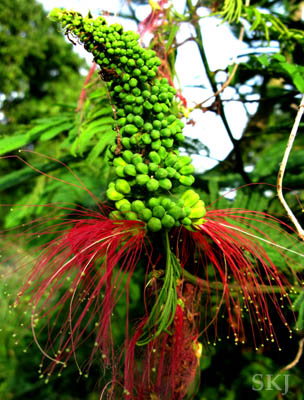 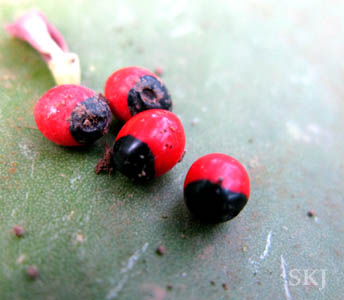 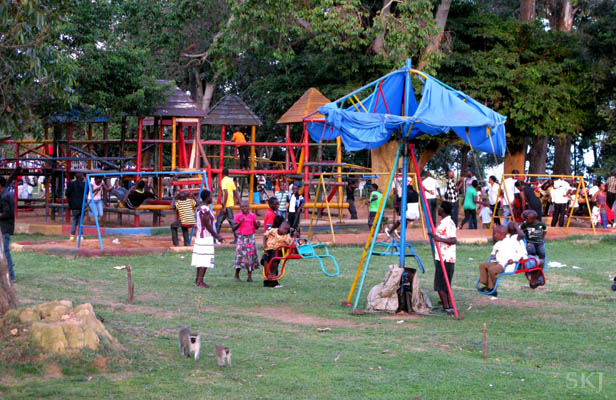 Today Robert told me to feed the deranged baboon, Ngugi, some bananas. I said I was scared he was going to attack me -- he’s completely mental. Though I said this, I wasn’t truly inhibited from feeding him, it was merely an admission of my emotional state in regard to Ngugi. So, the first banana he snatched was OK. Another freaky thing is that he gets a bit, um, aroused around me. So his little willy, which is practically prehensile, goes up and starts wagging around. Second banana I feed him, he grabs the fruit with one hand, and with his other, lightning-quick reaches through the bars and grabs hold of my hand and tries to pull it toward him. Out of shock I screamed, but managed to get my hand away, even though the pull was seriously strong. I didn’t get scratched or anything, but whew, that was freaky. So the next banana, I held way off to one side of him so he could only reach it with one of his hands.

But on the delightful side of things, the black and white colobus came outside his cage today and was just hanging about in the tree while we were carrying some food in. He was completely docile and took a couple bananas gingerly, eating them with delight, smacking his lips. Very cute.

Here are some more animals around the grounds. Sorry I haven’t gotten pics of the chimps yet. But here is my favorite bird, the gray crowned crane, an ostrich and one of the gazillion antelope species in Africa. 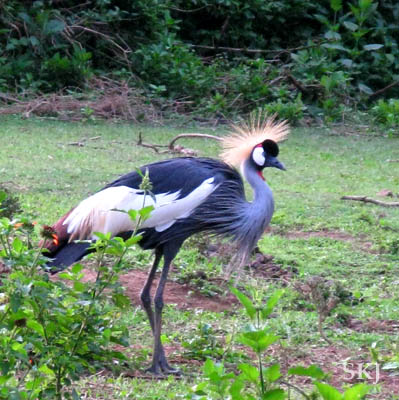 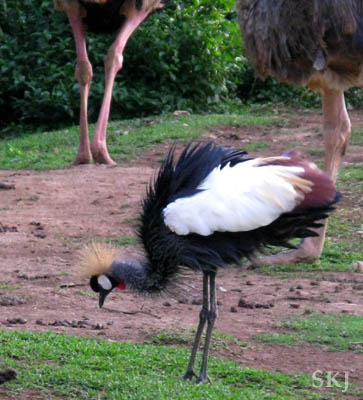 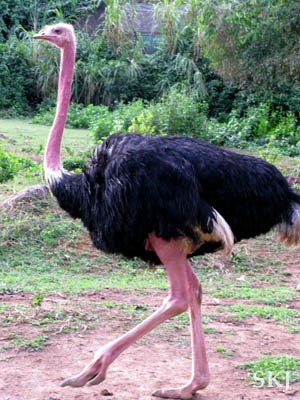 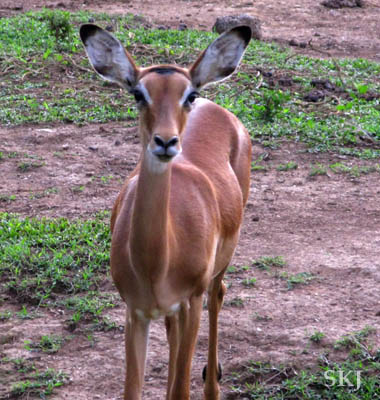 On a sadder note, Henry’s brother (there are 2 Henrys, this is the guy I worked with my very first day here) in his village 400 kilometers away had a terrible accident and broke his shin bones, they were sticking out of his skin. Not having a vehicle, Henry was trying to arrange transport. It took nearly 2 days, with his leg like that, bleeding the whole time, to get him to the hospital in Kampala, where they were able to perform surgery, but due to overcrowding at the hospital, didn’t give him any pain killers (!!) or antibiotics. Henry himself began looking around the hospital for his brother’s chart and finally got it and was able to point out that his brother was prescribed these various medicines and finally at the end of the day, they were administered. He will be in hospital 2 weeks at least, and Henry and his family have already run out of money to pay for his stay. Henry tried to get money from his bank today but there was none there (presumably his paycheck from the UWEC).

It’s tempting for me to just give him all my money and forget traveling around the country. I’ve overheard and been involved with other conversations illuminating how strapped people are. And this facility could use so many things… considering their resources, I think they’re doing an admirable job. It’s the only zoo in the country of Uganda, but the country is more Third World than I expected. I can see that being here will present far more emotional quandaries than I ever imagined. I know these people and this place and know how desperately they could use my financial resources, limited as they may be in the context of my world and my personal desires. I wish I could just not think about it and stick to my agenda. But methinks this will not be so easy.