I Cost About 15 Cows and 8 Goats in Uganda

It’s a good thing that drinking a beer and listening to an mp3 player are activities enjoyed equally well in the light or dark. The electricity goes out every day/night several times.  I’ve started just wearing my flashlight around my neck around the house at night… at some point I will need it (mostly just to scout the floor to make sure Martha isn’t having a party with some friends or something …). Also nice that laptop runs for awhile on battery.

I’m starting to get the hang of Ugandan time. Generally, if you choose Time A for a meeting or event, it simply means that the meeting or event will take place at either Time A + 40 minutes, Time A + 2 hours, Time A + 27 hours, or Time A – 20 minutes. Though on occasion, it’s followed the devious route of Time A x pi / square root of the height of the nearest marabu stork.

So there are on the order of about 55 tribes and tribal languages in Uganda. Some languages are mutually intelligible, others are not. Customs are often similar but not always. When people tell me about how things are in Uganda, they typically start with a general statement, that is to say a broad type of behavior that is generally true of all or most Ugandans. Then they say, “In my tribe …” and go on to explain the details of the subject matter within the context of their own tribe. I’m not sure exactly why, but it’s a trip to me (and was in South Africa, too, except I only dealt really with the Zulu) that all the people around me dress like me, act like me, talk English around me, eat and drink like me, maybe live in a house like me (like mine here at UWEC), etc., and yet have this other-worldly existence within a tribe.

So today Robert informed me of marriage customs in his tribe, involving letters of intent, arranged meetings, and bride prices. He named a typical bride price which included some number of cows and goats, maybe chickens, and a type of clothing for both the mother and father of the bride, some money, and some misc. I asked what I would fetch as a bride.  The first price he named was 15 cows and 8 goats. But then he reconsidered, maybe 50 cows and 30 goats was a better price than 15 and 8. However, I can’t hoe the ground from dawn till dusk, don’t yet know how to make Ugandan food (though, since a lot of it is simply cooked and mashed fruit or vegetable, surely I can pick it up), and I can’t even pitch food very competently across a moat for hungry chimps. Nor can I cut sugar cane. After listing these deficiencies, he re-tallied to about 25 cows and 11 goats. And 2 chickens for being a mzungu.

I kept asking this question to men I met throughout Uganda, how much I would fetch in a bride price. Another friend I'd made provided a wildly more optimistic number than 50/30/2. I mentioned this to Robert, and being my closest friend and confidant, he explained bluntly that the other guy was simply flattering me.

I wondered what people who live in cities pay, since they don’t have yards for cows and goats. Naturally, Robert laughed over this. Either a family member who lives in the country keeps animals for you on their land, or if the bride’s family also lives in a city, you can give the equivalent in cash. He asked me what was the penalty in Colorado for people cheating on their spouses. I said there really wasn’t one … it’s for the husband and wife to handle the situation between them. He was so shocked. He explained how in his tribe, if cheaters are caught, the man has to pay a fairly substantial fine to the woman’s husband/family. It’s presumed the man was responsible for luring the woman into his arms.  Everybody in the community will know about it and the man has to pay some livestock and maybe throw a feast and drinks. And maybe despite that, he will end up with some strident enemies in the community.

But he was a whole new level of shocked to find out that in America it is the bride's family who pays for the wedding. I believe Robert is more keen than ever to move to Colorado. Ha.

He is absolutely convinced that everybody in America has a maid. There are a fair number of things he refuses to believe about me. One is my age. Another is that I don’t have a maid. (believe me, I would love to have one!)

Today while throwing fruit across the moat for the chimps, one of them caught a mango directly from me, like catching a baseball. Was pretty sweet. Maybe I should say a little note here, as I’ve talked to some people here (visitors at the UWEC) and online who don’t really get why we don’t spend time with the chimps on their island. Perhaps someday I can snag some video of Matoke slamming open the door to the island as a brief illustration, and some pics of their mouths while I’m feeding them porridge so you can see their canines. Even 3-year old Nepa would probably be too big to handle. Sometimes when I give her my hand through the caging and she pulls it toward her, you can feel the strength even in her. But you know how I told you about the baboon snapping the broom handle … chimpanzees are far more powerful than baboons. Just trust me on this … it would be an exceedingly poor idea to saunter onto the island with 9 fully adult chimps and 2 young ones. These aren’t Hollywood chimps.

The enclosure with the shoebill stork also has a large population of  weavers They’re loud all the time, but one night I was walking back home past their enclosure in the dark, and the sound coming from there was deafening, the combo of those birds and the frogs and insects … it’s a swampland environment … was unreal. It literally hurt my ears, actual pain was throbbing through them. Never have experienced anything quite like that. Was especially strange being in the dark. The shoebill ... taken almost at dark, so foliage is colored a little funky, but the bird really is blue. And huge ... 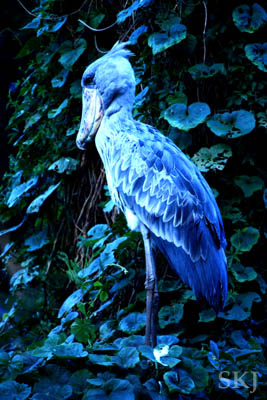 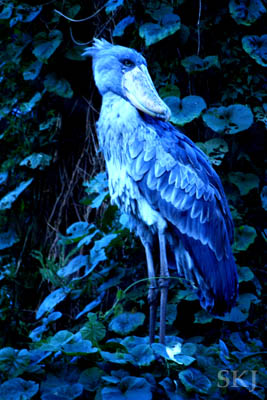 Pleasantly, sometimes you can hear the lions roaring. There are 2 females and a male. Today one of the females had fallen head-over-heels in love with the male and was desperate to get his attention, playfully attacking him, rolling around beside him, pushing the tire swing at him. Very cute.

A last note … I learned the efficacy of honey on burns. I managed to spill some boiling water onto my stomach today. It was quite painful. Henry produced a jar of honey and told me that spreading some on the burn would help the pain. So I made several applications of a dark honey over the next few hours, and sure enough. Nighttime now and it is merely a pink spot that is only the slightest bit tender.