Aluma is a big boy. Some of the zookeepers tell me they predict someday he will overthrow Matoke and become alpha male. He’s not a particularly friendly fellow with the other chimps. He spends the vast majority of his day alone. He doesn’t seem to care to socialize. He spends the afternoon under this same bush every day. 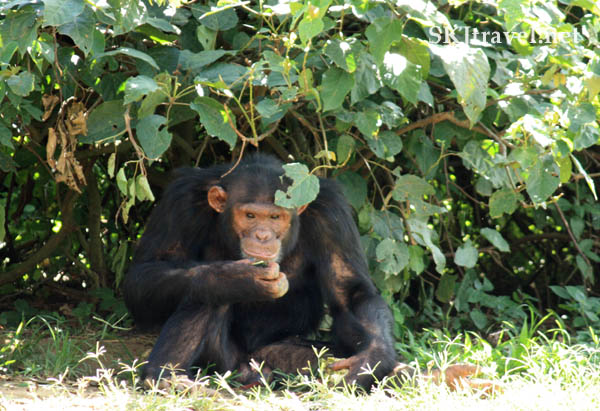 Another funny thing about him is that when he does come out in the open occasionally to lie down, he never rests his head on the ground. He always holds it up as if he is always on some kind of low-level alert. In the bottom 2 photos here, obviously he's looking at the camera, but even if he thought no one was around, he wouldn't put that head on the ground. 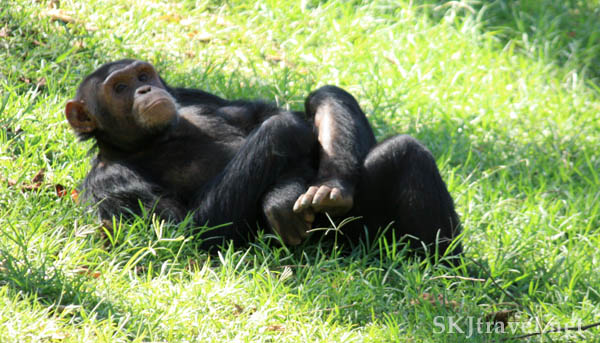 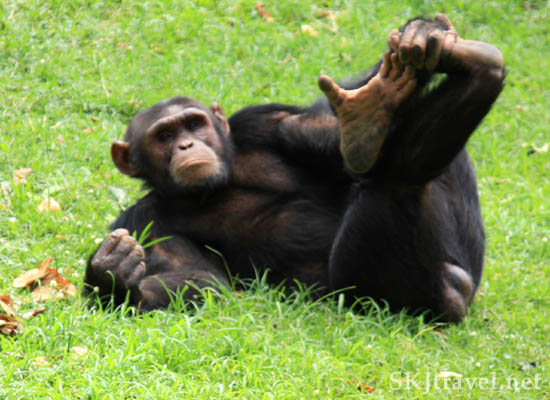 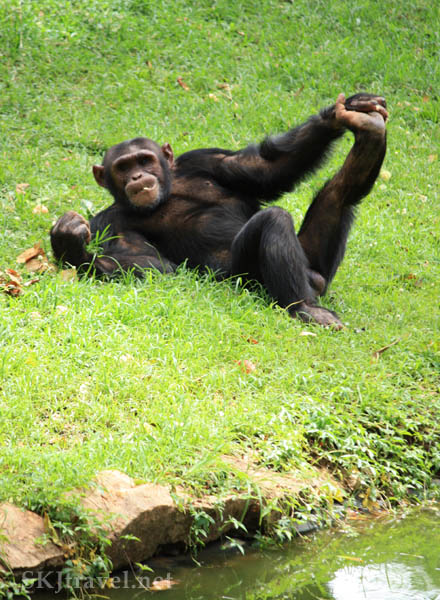 He is the only chimp who incurred any severe injury while I was there. Twice he had wounds inflicted by other chimps. We never saw the scrap that caused these wounds, but probably they came from another big boy such as Matoke. We had to feed him antibiotics in his porridge and tried to spread honey on the wound with a stick. (I’ve mentioned how efficacious I discovered honey to be for burns … apparently good for cuts, too.)

I don’t know if it has anything to do with the fact that he primarily grooms himself, as he doesn’t take part in most social activities, but his hair is very patchy, almost like he over-grooms himself. Maybe that’s just the way his particular fur is … his “hairstyle,” shall we say. He is easy to identify because of his solitary behavior, but also, behavior aside, he has a distinctively round face and distinctive patches of bare reddish skin. 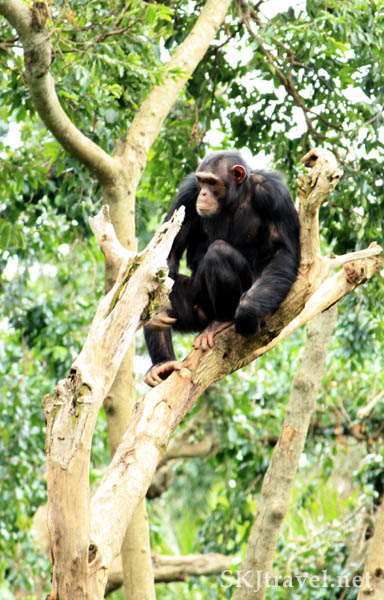 The funniest encounter I had with Aluma was one morning when we were to feed some bananas to the chimps after their porridge before they went onto the island. We would break the bananas in half and try to put them directly in their mouths, like we did with the porridge, otherwise the dominant chimps would simply grab all the bananas out of the hands of the others and run off. Onapa, as usual, was hanging far back behind everyone else, he was the only one who hadn’t received a banana. Only he and Aluma were left in the “race track” (the tunnel between the night enclosure and the island, covered by caging wire through which we dispense the porridge and fruit). I was trying to save half a banana for Onapa. But Aluma saw I had this half and wouldn’t leave my side. I couldn’t give it to Onapa in his presence or he’d snatch it away. So I tried for ages to get him to go out to the island. I would pretend to throw the banana toward the island and then race back to Onapa, but he always figured out the ruse and raced back to arrive at Onapa at the same time as me. So then I distracted him and tucked the banana into the waistband of my pants behind my back so he wouldn’t be able to see the banana, and he would presume I’d given it away and go on out to the island. Nope. I don’t know how, because he definitely did not see me put the banana there, but he KNEW I still had that stupid banana. I showed him my two empty hands but he was not fooled. I walked down to the island entrance with my hands open the whole way. He followed me but wouldn’t go onto the island. When I walked back toward Onapa, he was on me like glue. Exasperated, I removed the banana from its useless hiding place and tried again with old-fashioned distractions. Then one time when he wasn’t looking, I put the banana in my pants pocket. Again I showed him my empty hands. He didn’t buy it. This time I turned around in a circle to show him my back. When I completed the circle and could see him again, the look on his face was priceless. He was dumbfounded. He was confused and sad. I turned in a circle again to confirm there was no banana. He obviously had been convinced I’d hidden it behind me again. He was absolutely certain of this. When there was no banana there, he was completely crestfallen. I wish you could have seen it. I felt so sorry for his confused state, I almost gave him the banana. But instead, he soon loped onto the island, utterly dejected, and I went back to Onapa still waiting in the race track, and gave him the treat. I’ll just never forget that look on Aluma’s face. 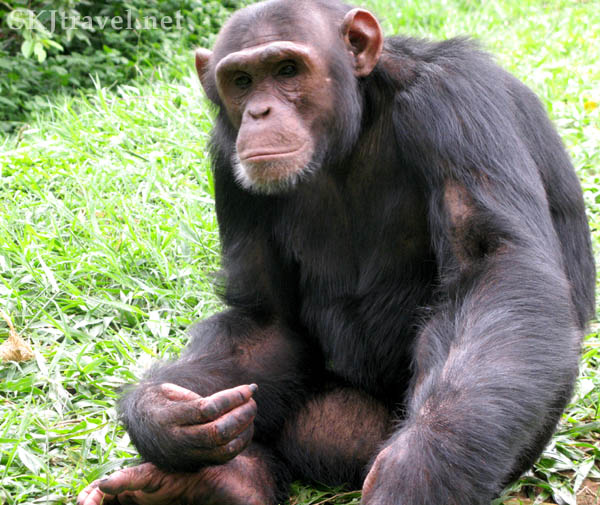