My Mortal Enemy ... and other critters at Keepers


The irony is a little ridiculous … if you only knew how the clean laundry never gets put away at my house … I just pluck it, all nice and wrinkled, out of the clothes basket half the time, and how the dirty dishes pile up on the counter above the dishwasher, not quite able to make it all the way inside the dishwasher. Yet here I am at the animal sanctuary willingly folding rags and monkey blankets out of the dryer, washing by hand large heavy metal trays that the tigers and lions eat out of, happy as a clam. One day, random activities included moving ladders and fiberglass insulation around. And once again cutting up fruit and vegetables. But here I get the privilege of spending time in close proximity to beautiful animals not usually so accessible … I guess it’s a form of wage. Plus, come on, how cute is it to be folding monkey blankets and coatimundi blankets?

Yes, coatimundis. Critters I met in Guatemala and just love. A relative of raccoon, which some of you will know, are near and dear to my heart, as I used to rehab orphaned raccoons. I was delighted to get to feed a bunch of raccoons here one day; there are 10 who all live together. Here are coatimundis, Rocky and Cody: 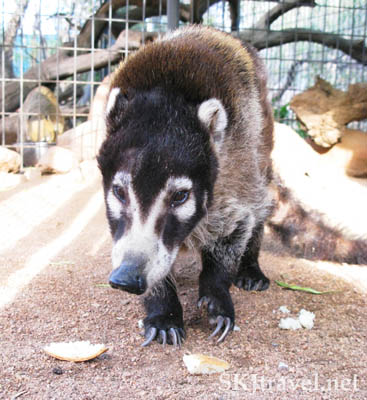 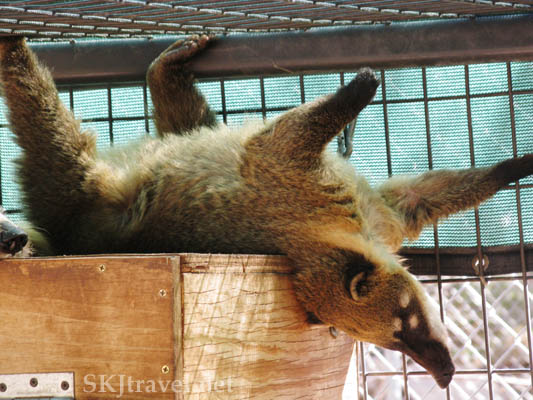 So you know how some people seem to draw the love of cats, or some are magnets for dogs, and other people seem to repel certain pets … kitty cats, for example, typically like me. Well, I have found my nemesis species: the baboon. In Uganda I chalked up Ngugi’s aggressive and frightening behavior to the fact that he’s pretty psychotic to begin with. However, Billy the baboon here at Keepers of the Wild has just as malevolent a streak for me. Doreen was talking him up as her favorite critter here, and she always brings him special treats. I was expecting a sweet thing … but if I come anywhere near him, he immediately takes on a menacing demeanor. Doreen asked me to take a photo of her next to Billy in his cage. Well, Billy was nice enough to her, letting her touch his hand extended through the cage. But he picked up handfuls of gravel and threw it at me! So there I am trying to take a picture through a hailstorm of gravel. Finally I had to leave his presence, he got so irritated. So for whatever reason, baboons and I are mortal enemies. Do you have a nemesis species?

There is a wide variety of monkeys … most were confiscated by the local sheriff from an exotic pet trader. Their accommodations currently are not ideal. Since they arrived so suddenly as a flood of animals, Keepers had to scramble to house them. But plans are in place to imminently expand and improve their habitats. Here is an interesting couple I’d never seen the likes of before: Squeak and Buster. They're sitting in the walkway between their outdoor and indoor enclosure. 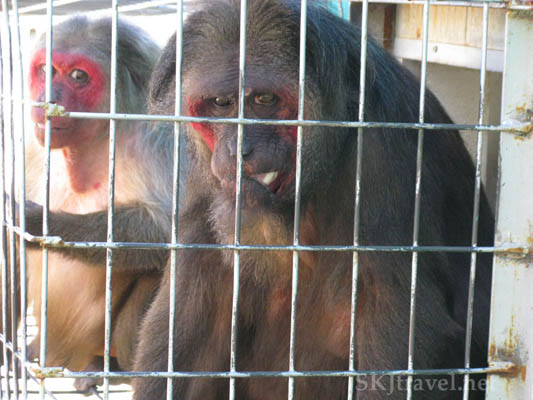 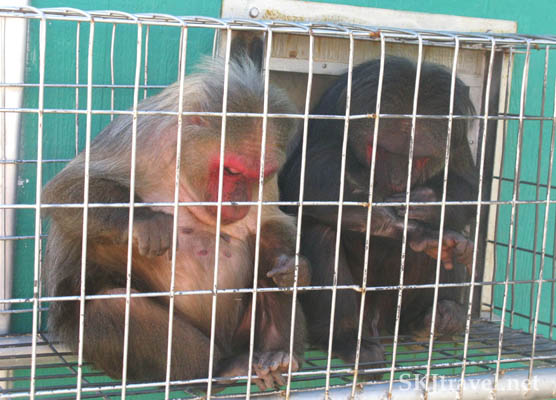 The thing about working at a rescue sanctuary is always having to learn the sad stories. For example, Carlos, who was bought as a pet and the owners had his teeth pulled so he wouldn’t bite them. Can you imagine? His tongue perpetually lolls outside his mouth now because he has no teeth. 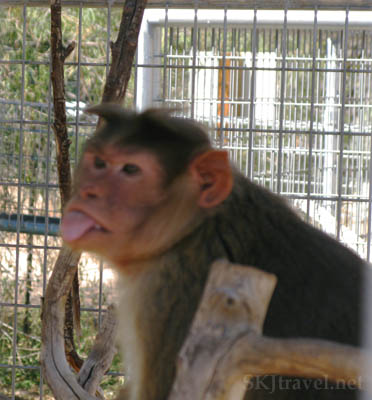 Several species of smaller cats have found refuge at this sanctuary also, including lynx, serval and a fair number of bobcats – this group of four bobcats are usually found snuggling together. So fluffy and cute, you just wanna hug ‘em and nestle in with them. 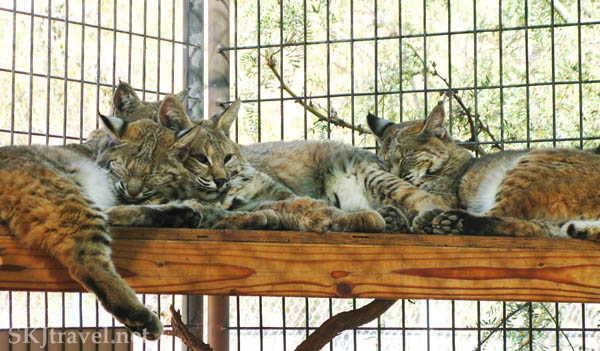 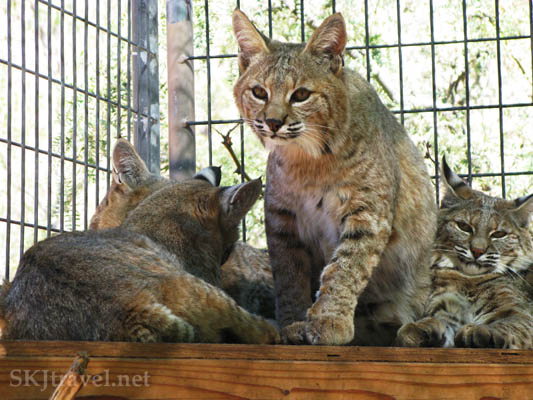 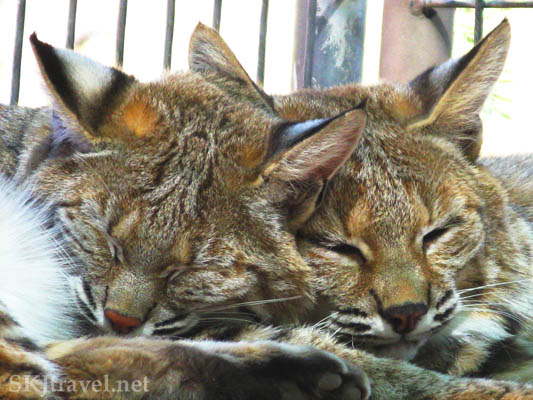 A small collection of reptiles includes a couple snakes, several tortoises including 70-pound Bob, and two iguanas. Had I not had the close contact I had with the monster pythons at the UWEC in Uganda, I’m quite sure I would never have had the nerve to take such a close-up shot of these snakes, being held here by one of the regular volunteers. Snakes still give me the heebie jeebies, but now I can at least function around them. 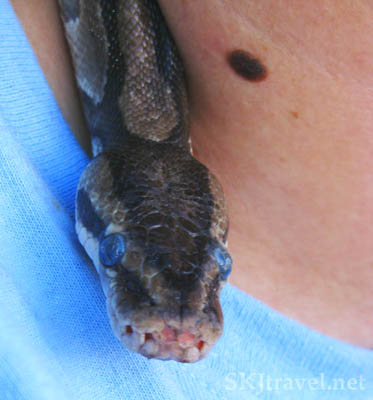 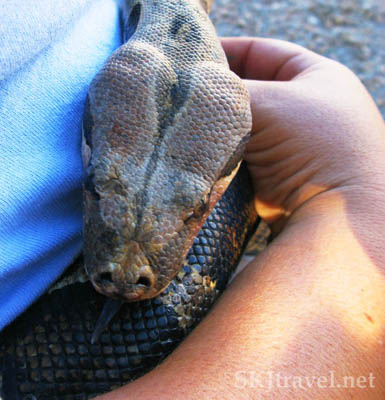 I don’t have a photo of him, but so far the most dangerous animal at the sanctuary has proved to be the alpaca! Reared up on his hind legs and knocked a keeper to the ground with his front legs.

And of all things to find in Arizona, emus! Beautiful birds. I never really noticed the striking blue necks before until seeing them this close up. 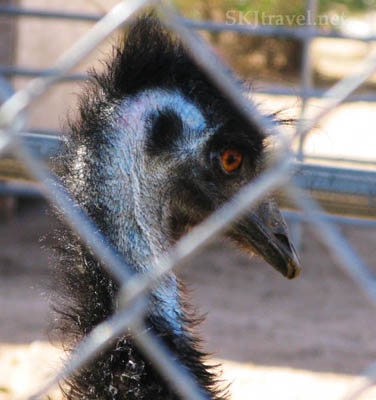