azertyuiop
qsdfghjklm
wxcvbn
The letters on this keyboard are not quite where they belong and I don’t know how to make an apostrophe or a period. Oh Erik figured out the period. [Archive Note: I never did figure out the apostrophe, but I went through and put them in later for the sake of the archive. Some of the letters were in a different location on the Tunisian keyboard, so it was slow-going to type as I hunted around for keys that were not where I am used to them being! Also the "internet cafes" (sans café) were usually miserably hot and uncomfortable. As a result, the dispatches from this trip on the road were not very long, despite the amazing sites and adventures we experienced. I have expanded most of them in transferring them to a website; they originally emails sent to a maillist.] 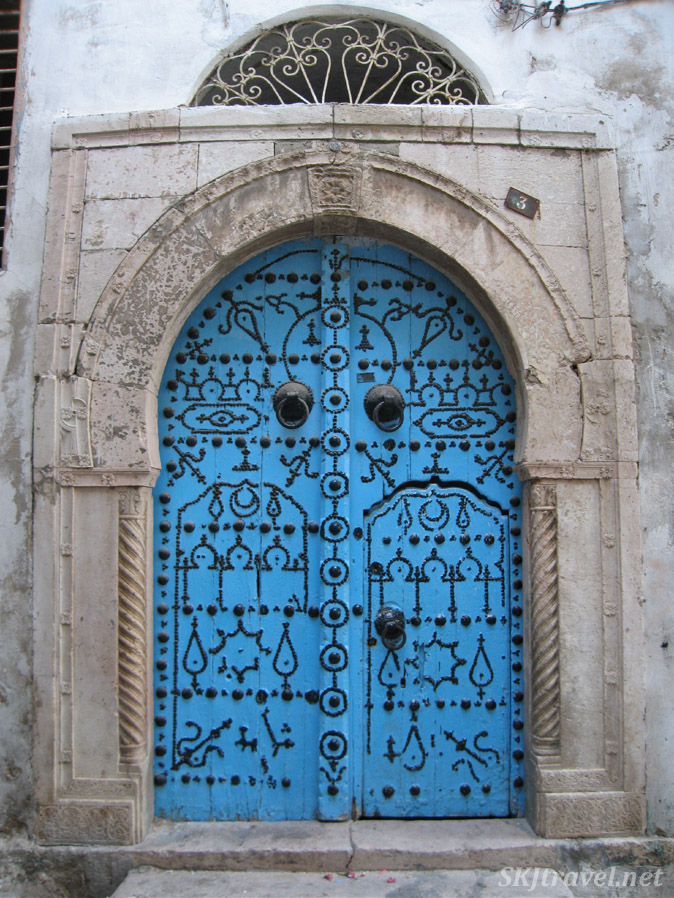 Our first day here in Tunis, we learned that there is never any need to invest in an audio-guide for any sights, as you will inevitably end up with a human guide whether you want one or not.  We wandered somewhat aimlessly around the massive medina for pretty much the whole day.  This is the old, walled part of a city, and where the souks, or market places, are located.  I can scarce exaggerate the number of passageways and alleys and mazes, all filled with vendors. Truly remarkable.  If you ever need to pimp your hooka, this medina is the place to go... Hooka smoking is ubiquitous, producing fruity aromas wherever one dost pass. And stores sell a hundred different colors of bodies and pipes. 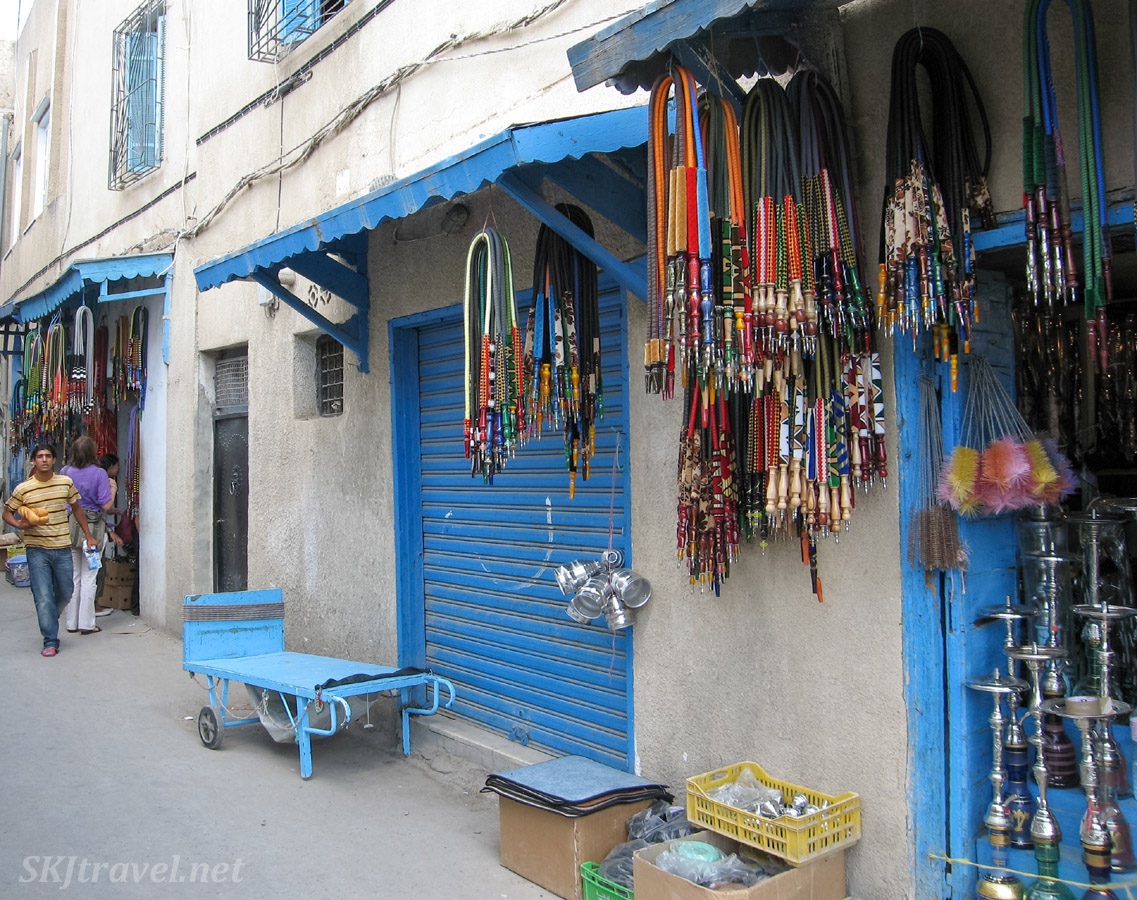 Here is a sample of typical doors and alleyways through the medina. And of course kitty cats! They're absolutely everywhere. Yay! 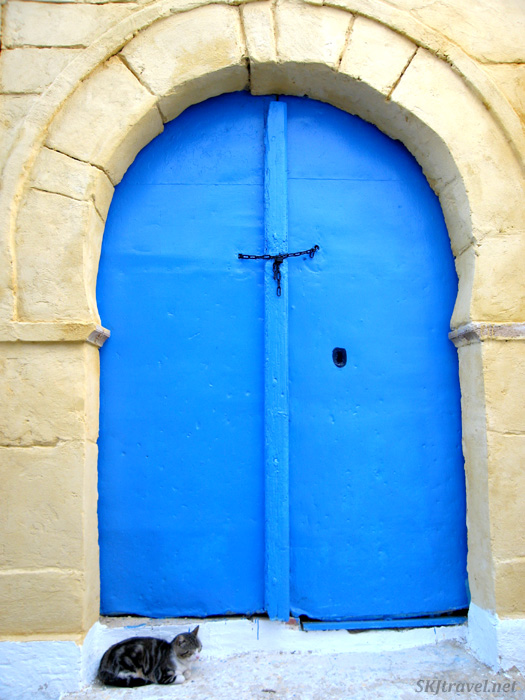 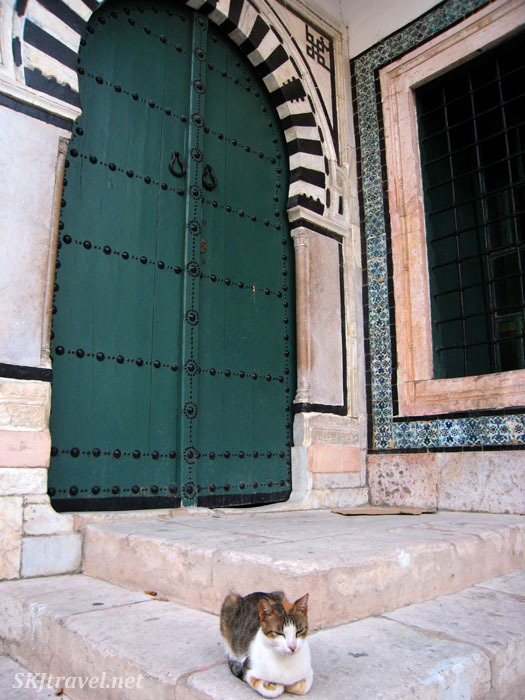 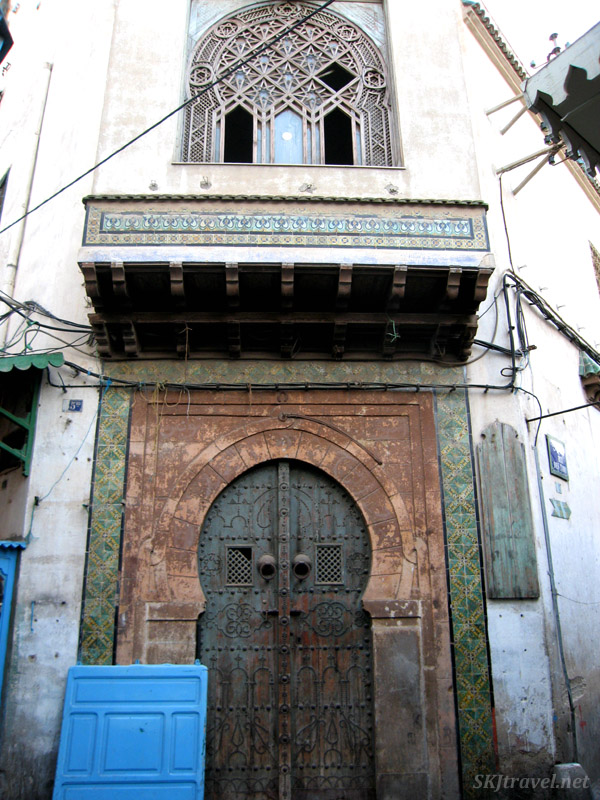 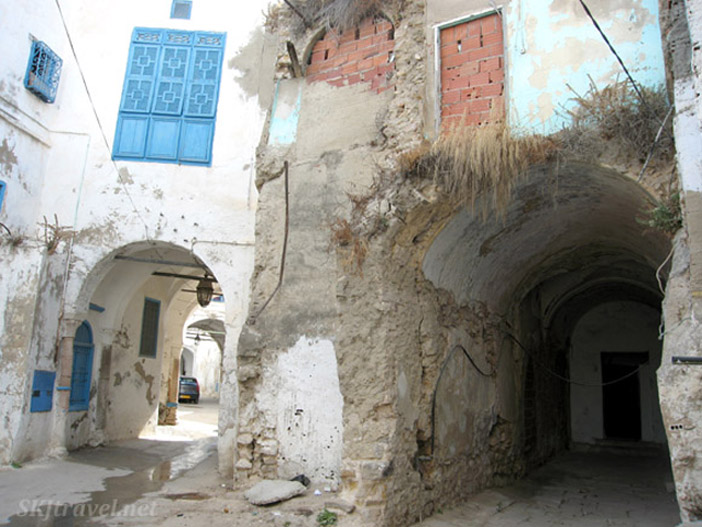 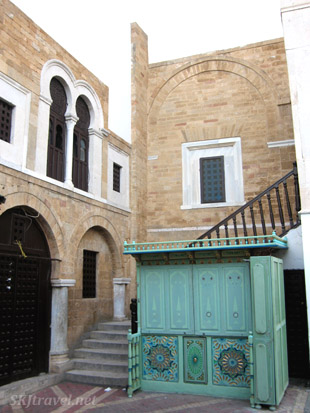 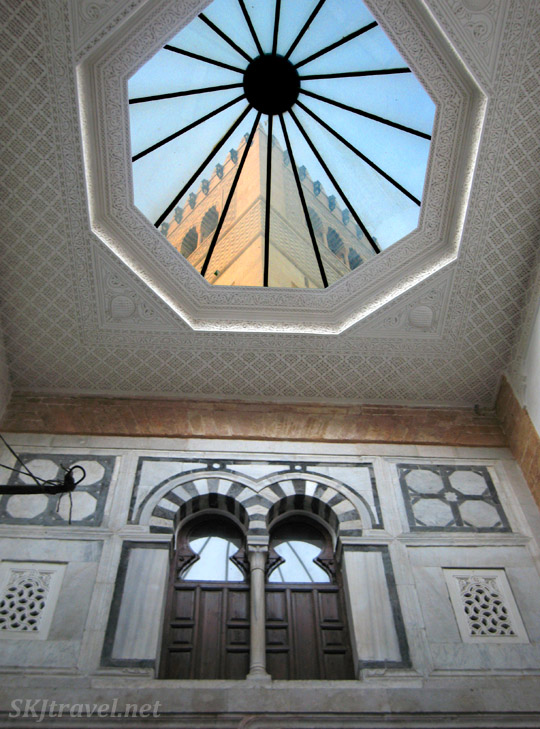 We got genuinely lost. Very difficult not to if you're not paying attention. 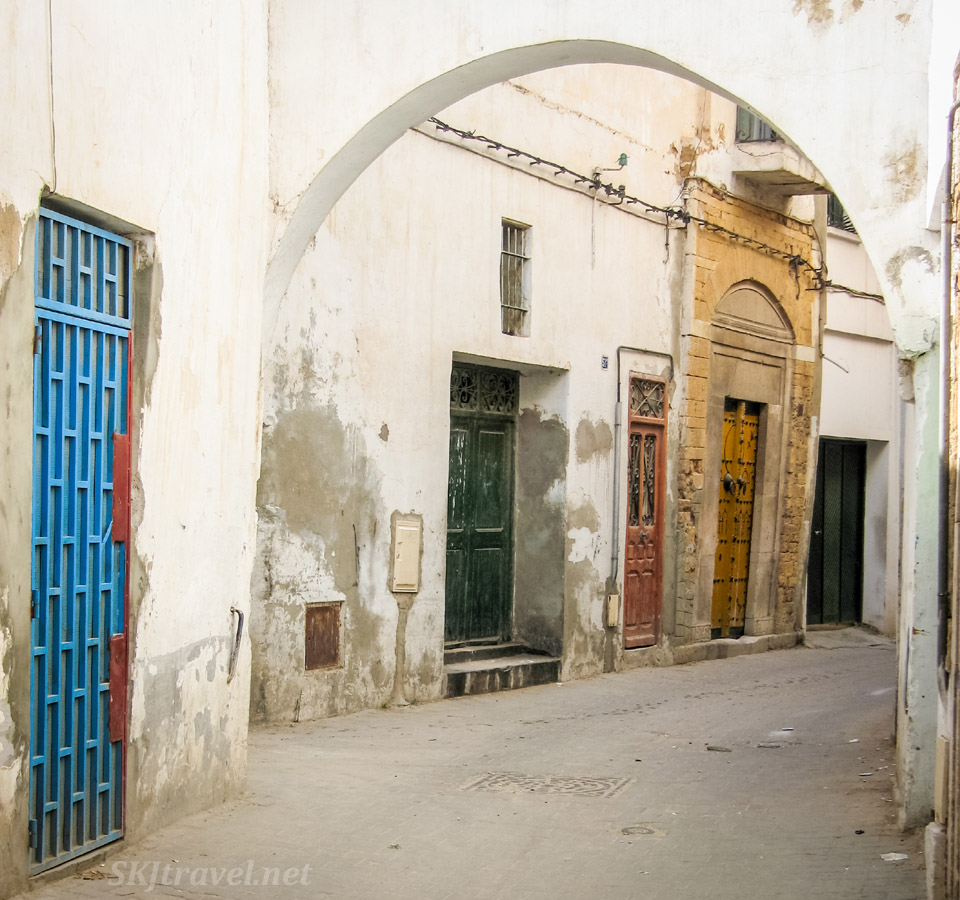 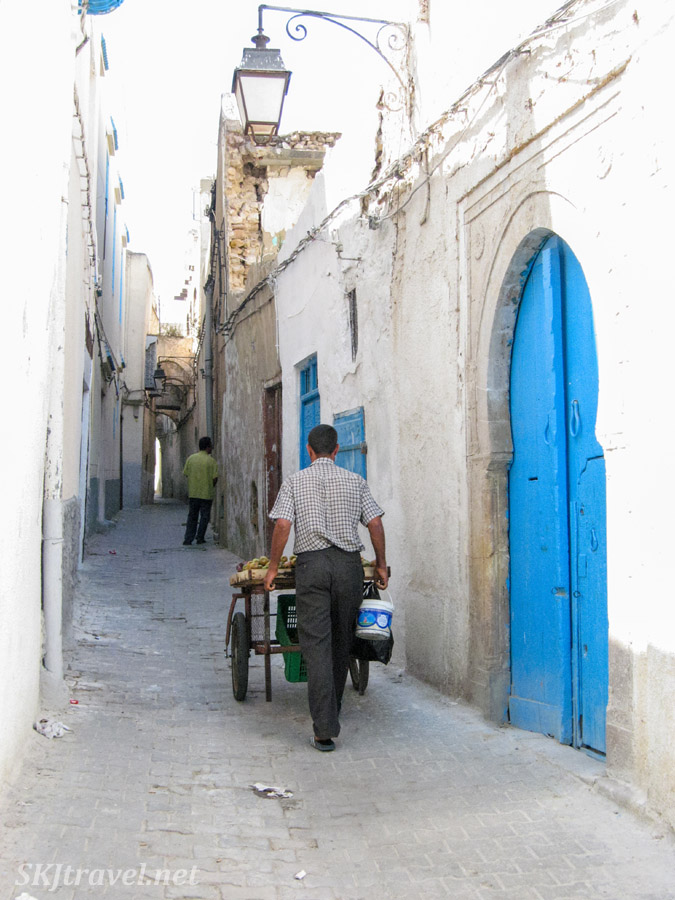 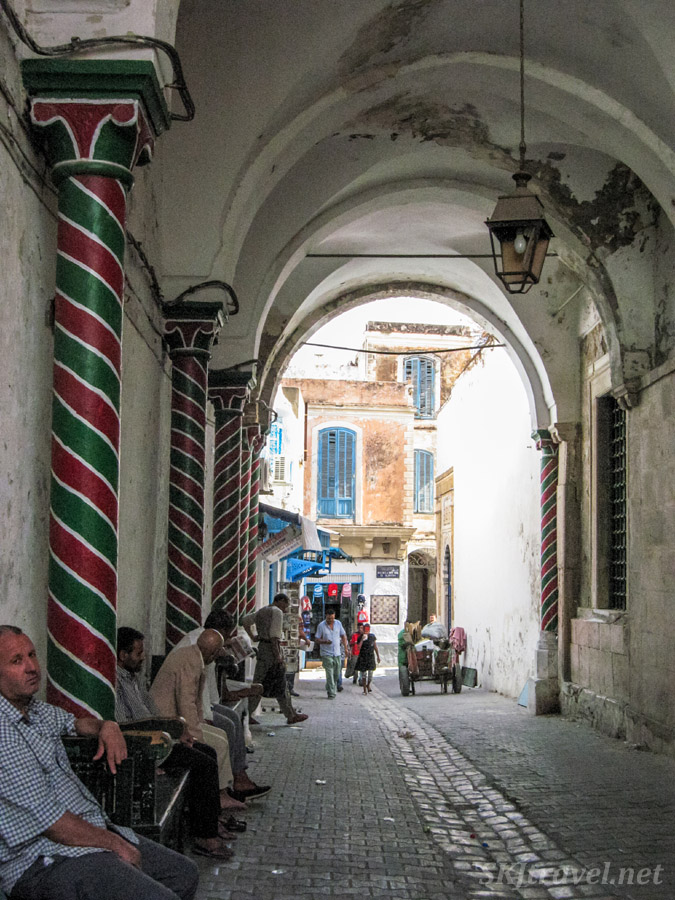 That was all fine and good and fun until I had to pee in the worst way. I thought I was going to burst a kidney while we tried to find our way out to daylight to someplace I could use a public restroom. The closest place we could find was a cafe, but only men are allowed in the cafes in Muslim countries. But Erik went in and asked if he were to buy a drink if I could run in and use the restroom. The proprietor took pity on the foreign girl and agreed. It was a great relief to empty my bladder, but it came at a cost higher than that of just the coffee:  it's a room I can never unsee and never unsmell. It was truly the most horrific, feces-coated room I have ever stepped foot in. The only situation I can think of that would be worse is walking into some graphic crime scene.

Here is the inside of a very old building located deep in the heart of the medina. 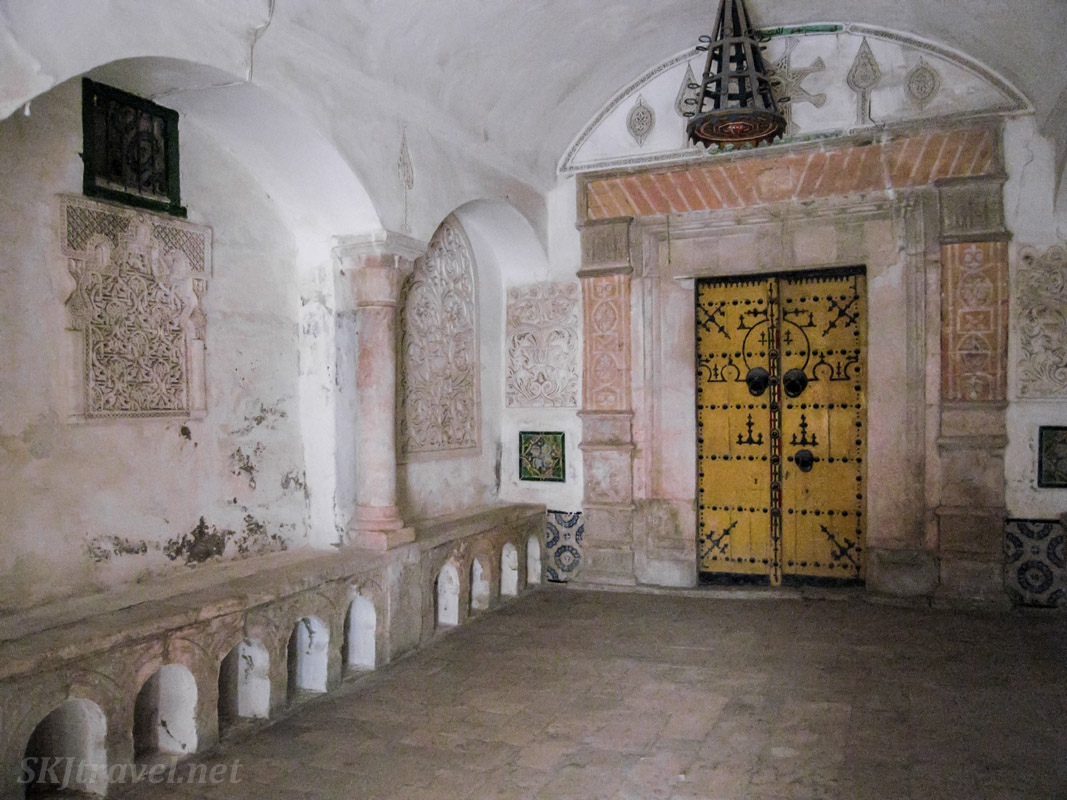 Yesterday we saw pretty much ALL of the Carthage ruins.  Some places were quite monumental, if mostly Roman accomplishments – a massive cistern system, a huge bath complex, amphitheater, villas, etc. When Rome took over Carthage after the Punic Wars, it was mostly rebuilt by the conquerors. The sanctuary of Tophet, though, was not used by the Romans, where the urns of sacrificed Carthaginian children were found. And somebody built their house right next door – if that’s not a premise for a horror flick, I don’t know what is. The guidebook claimed that a person couldn’t see all the Carthage ruins in one day, but they don’t know us! Trains rides and lots of walking, but really no problem. 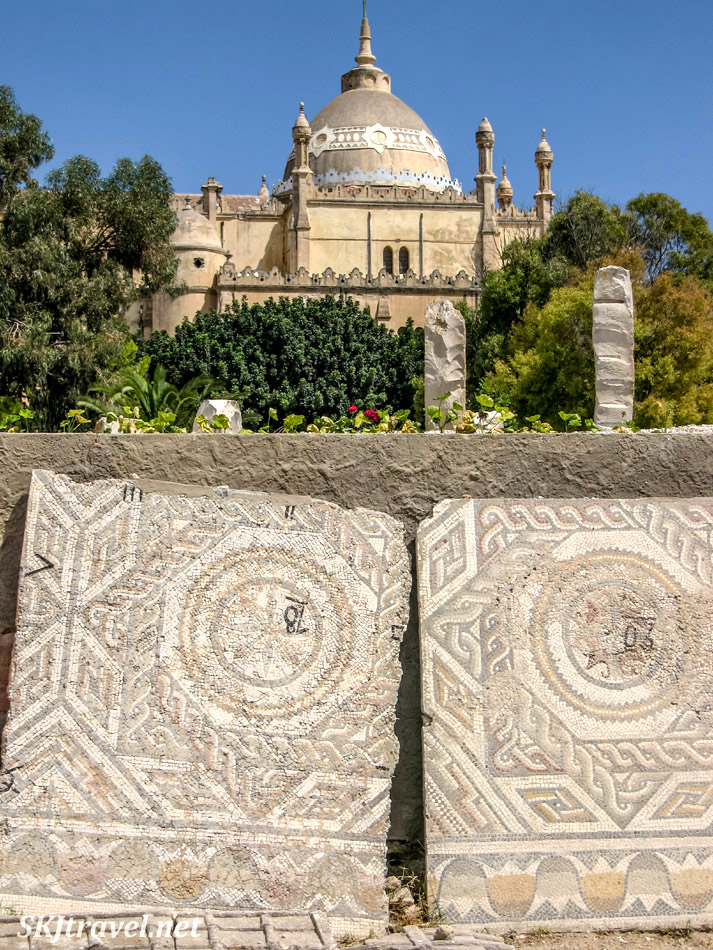 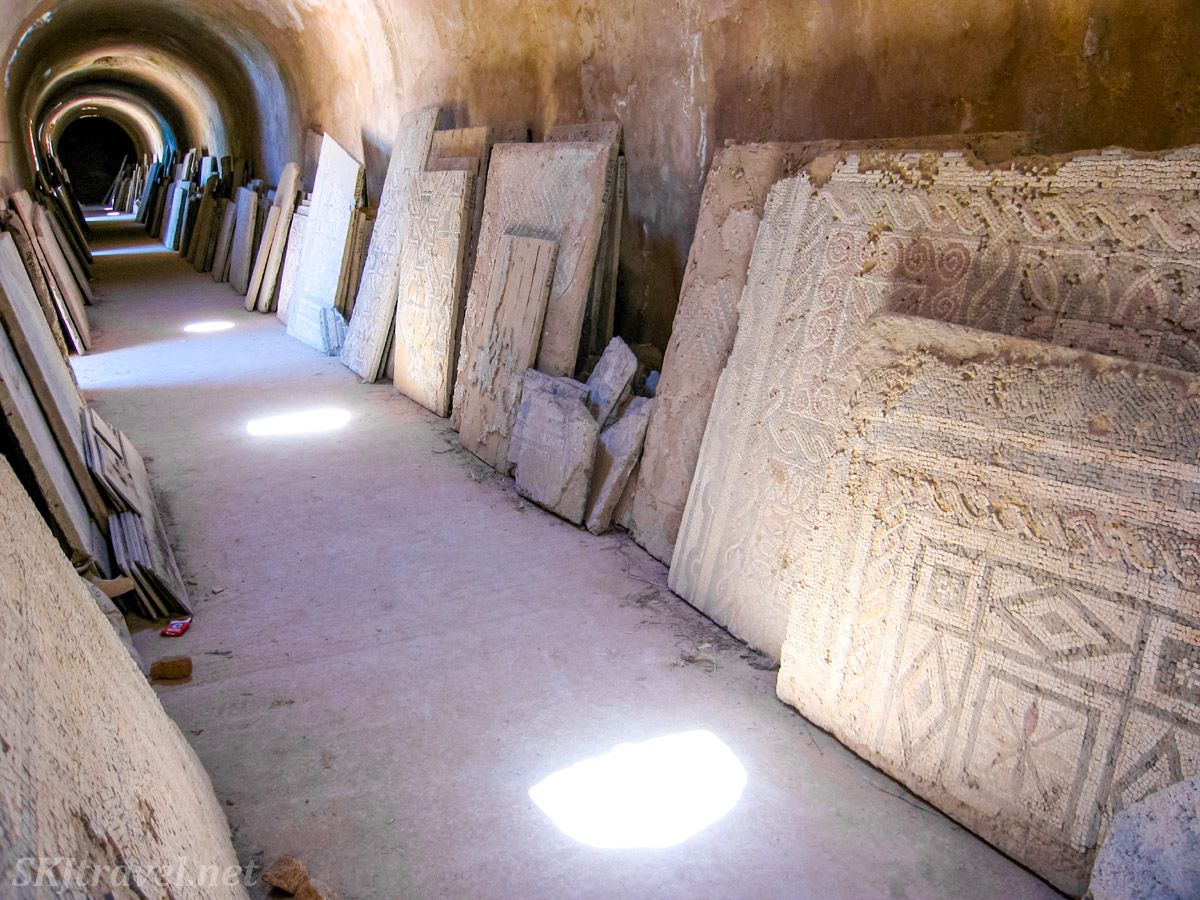 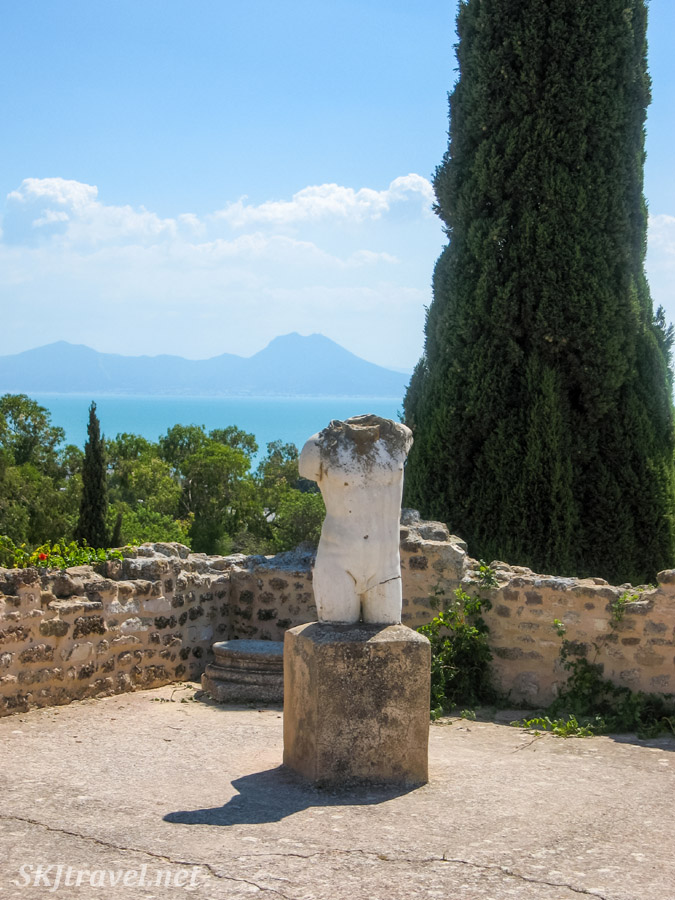 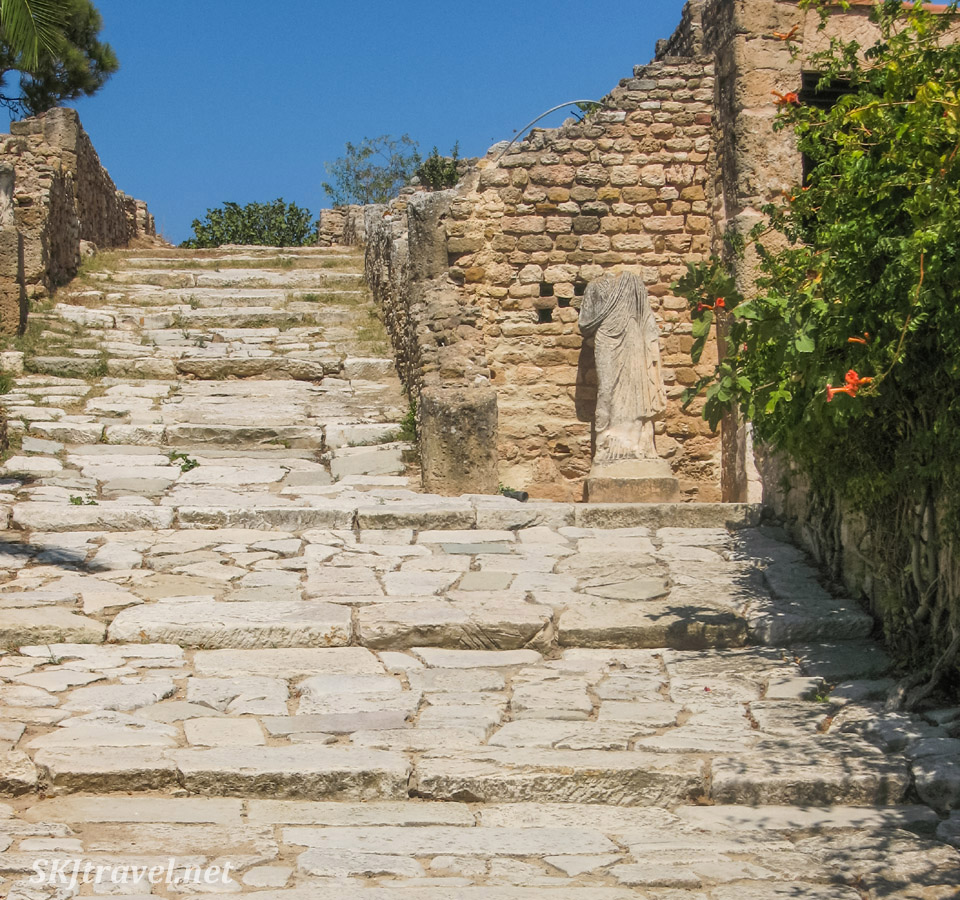 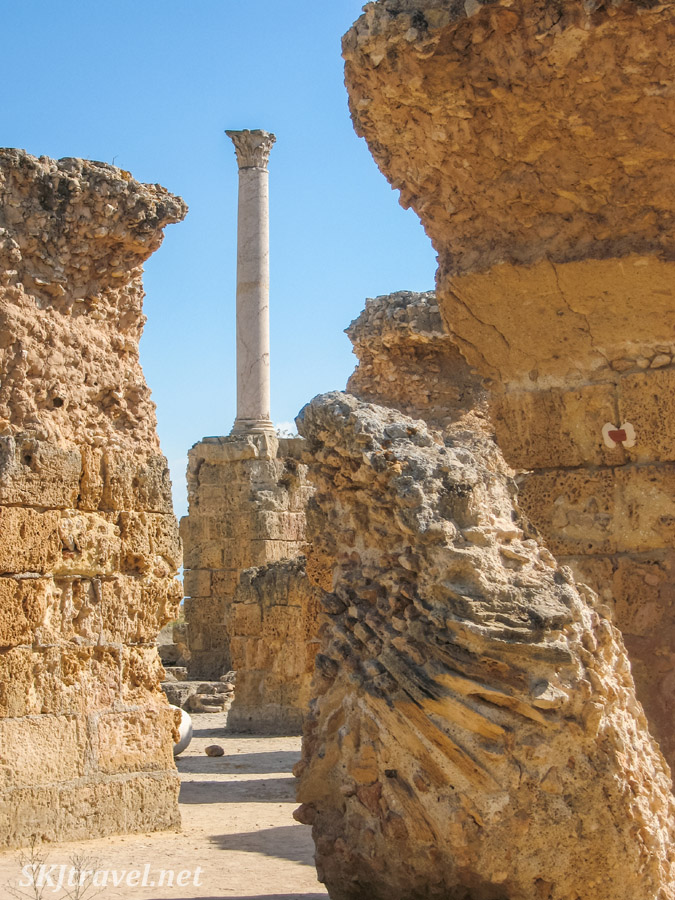 Then we took the train to a pretty village called Sidi Bou-Said for happy hour mint tea (me) and moist coffee grounds (Erik, who doesn’t like coffee but likes caffeine).  Mint and coffee is what makes for happiness among the locals, but maybe it’s a good thing there isn’t much alcohol to be found; as we’ve seen several full-on brawls in the streets and sidewalks – never seen anything like it in America. (Well, maybe when I worked the canneries in Alaska ..…) 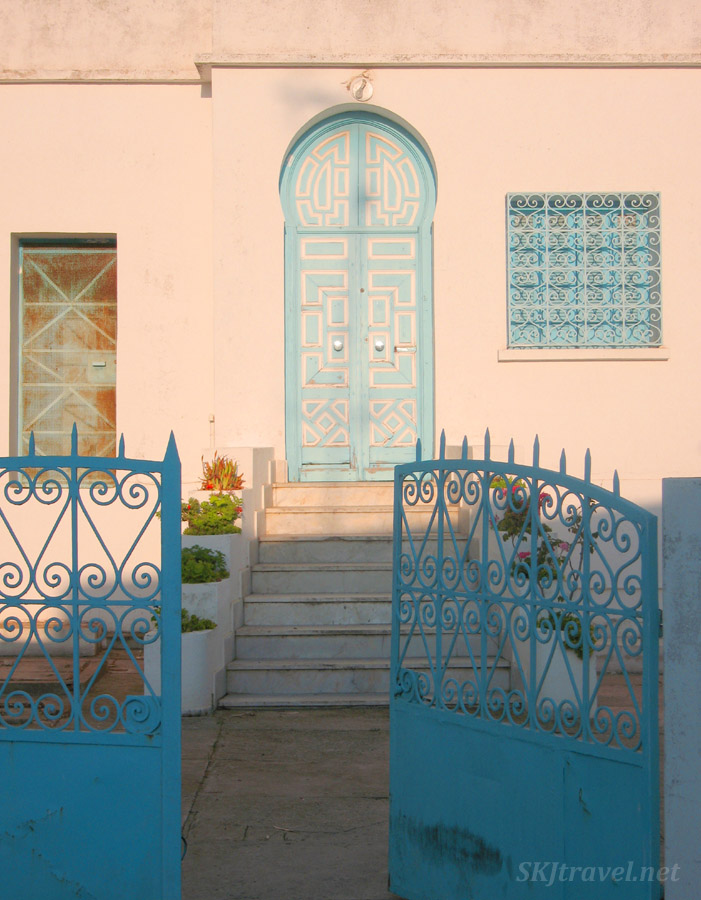 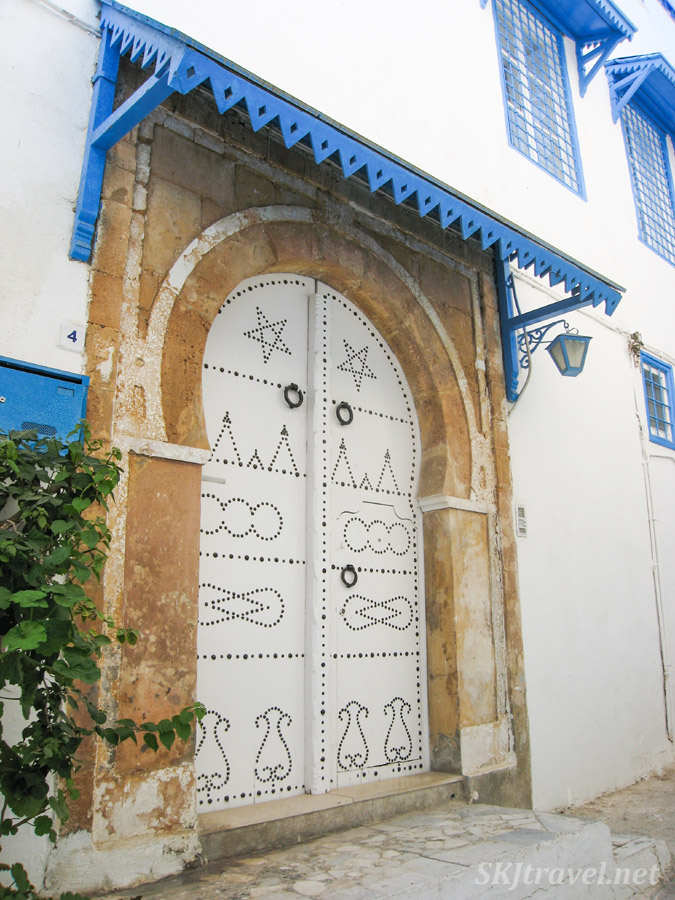 The views at Sidi Bou-Said were perfectly lovely, overlooking the Mediterranean, Carthage, and Tunis in the distance. The sea water is really a striking blue-green. We thought there were a lot of cats in Italy and Greece, but you could find as many cats on one street here in Tunis or Sidi-Bou-Said as you could in a whole Italian village.

This morning we went to the Bardo Museum, which houses an astounding collection (largest in the world, in fact) of Roman tile mosaics collected from all the Roman ruins that lie scattered throughout Tunisia. Some of them are 20 by 30 feet and larger.  So much variety.  Some of them from a distance look as plush as carpet. Up close, the detail is amazing. To think of the artisans placing each individual stone into place ..… 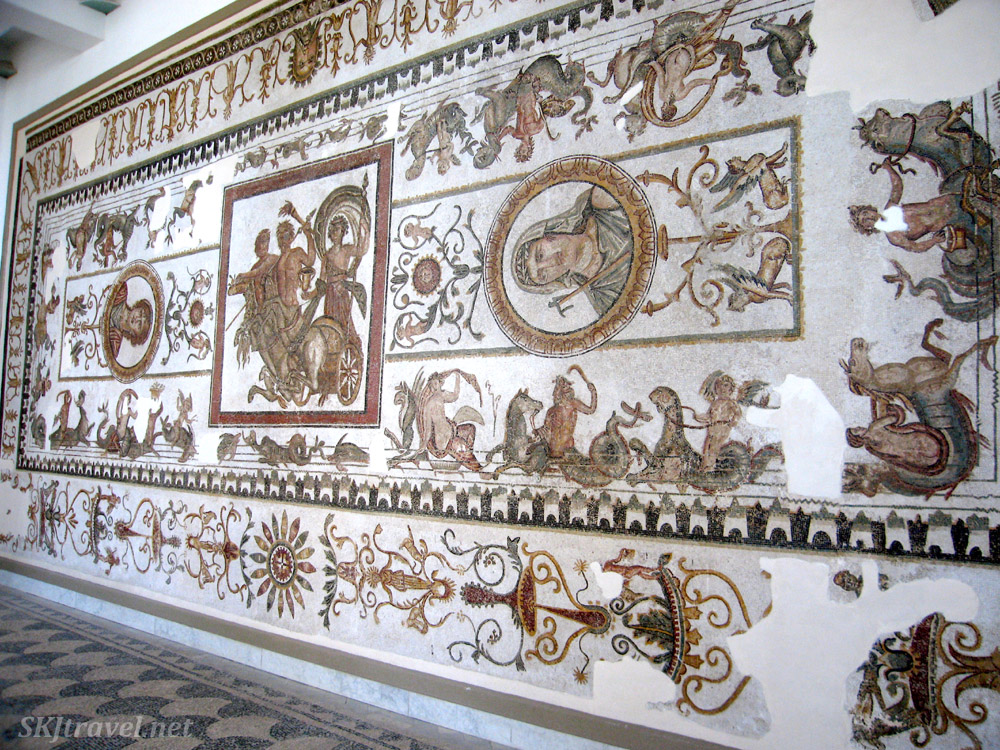 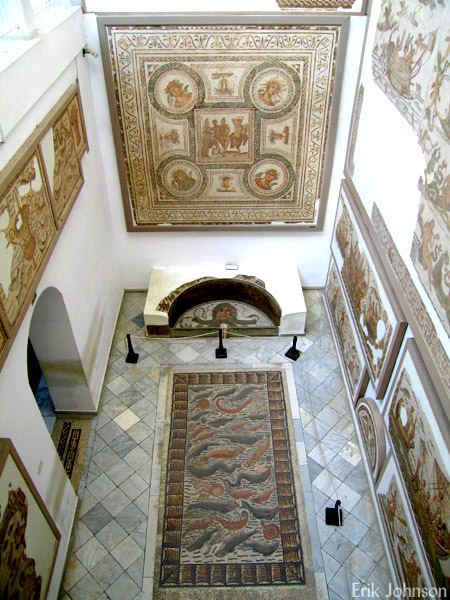 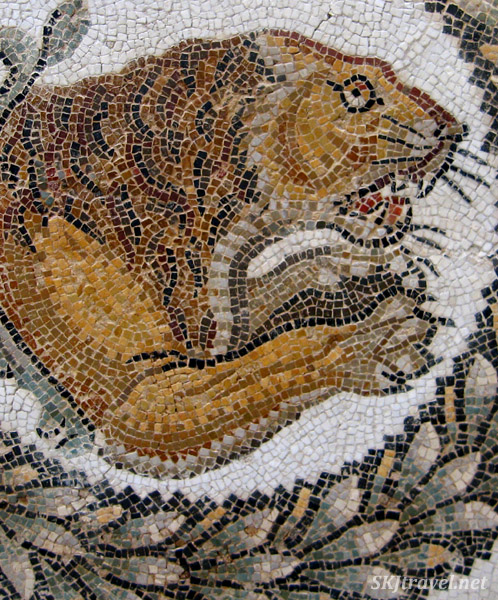 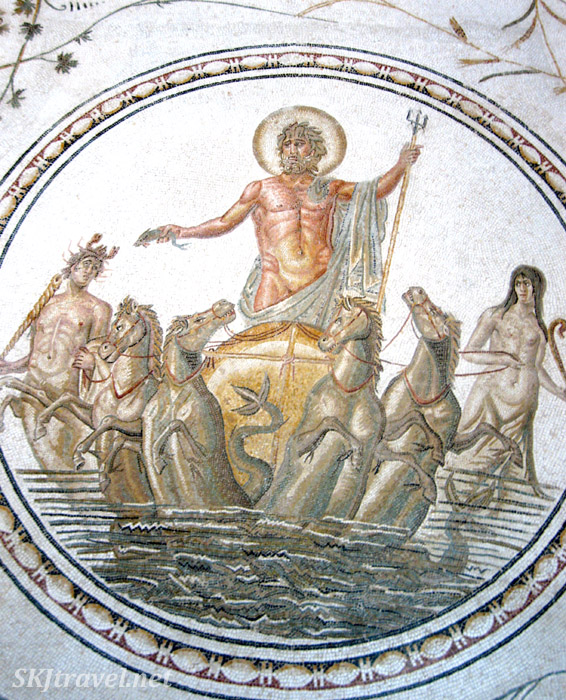 Check out all the little details on the mosaic above ... the variety of people on board the ships; a leopard is jumping out of a ship; an octopus, eel, fish and crustacean float in the water. Imagine looking at this in your villa every day. If I was a child growing up there, what stories I would have concocted in my head with that scene!

The building that houses the museum collection is an old royal residence, and even without the mosaics, it's a really cool building. 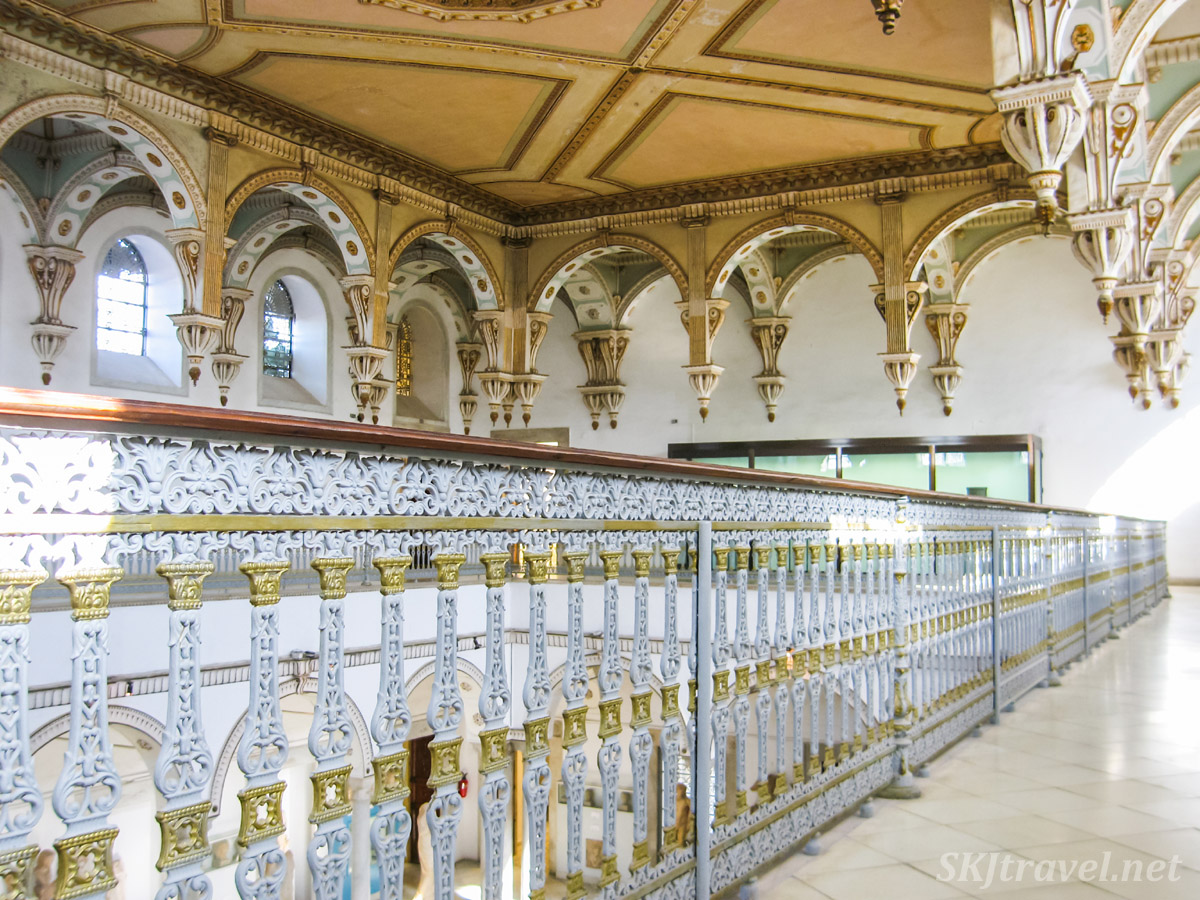 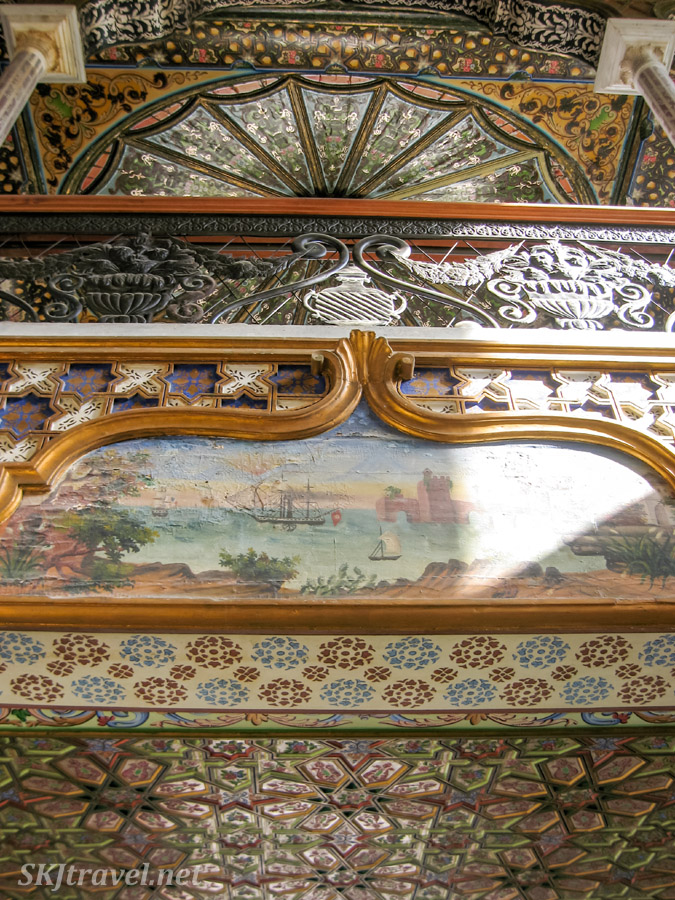 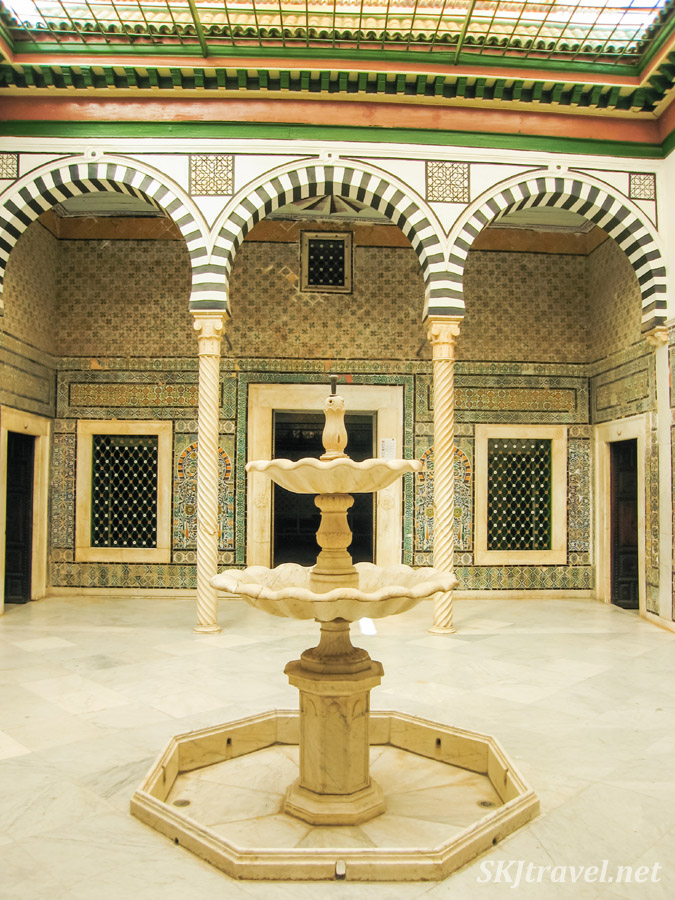 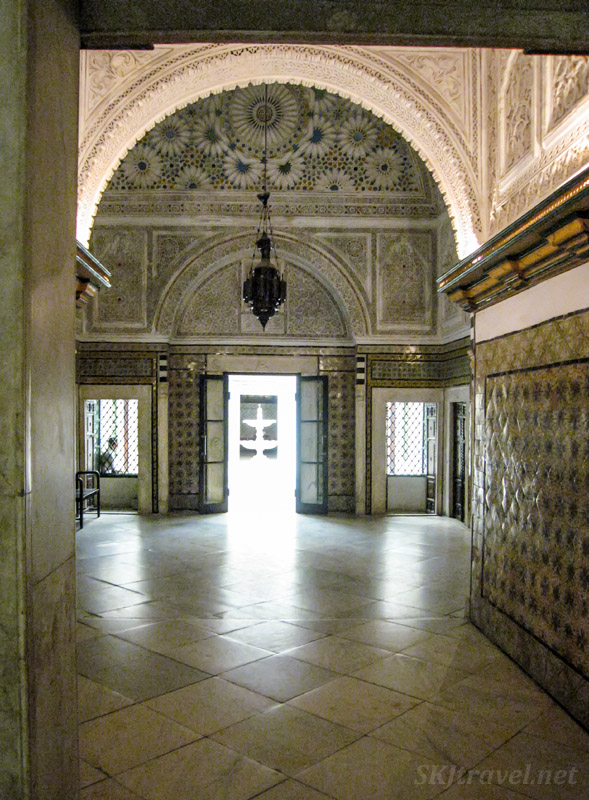 OK, well, it really is a bit difficult typing with any degree of efficiency, so that's going to conclude my short narrative of Tunis. We are well and having fun.