Well, we started out our anniversary last night with quite a bang.  Beer is hard to find here, but we found a restaurant on our first night in Djerba (which is an island) that sold it. Erik bumped the table with his leg and spilled his beer on the table and himself.  The guy sitting near us said, “Oh, that’s good luck!”  He spoke good English and he came over to sit at our table and we ended up chatting over a few drinks.  After said drinks, he invited us to his brother’s home for dinner; his wife cooked up some fish and couscous, spicy spaghetti, and fresh fruit for us! We got to see the inside of a local home and have this amazing dinner. What luck.  Then our new friend took us out to a night club down on the tourist strip and bought our drinks all night long!! So we partied ourselves up.  :-) Till 4 a.m.

So we have a Nissan truck now.  It only took 3 guys and 2 vehicles to get it rented to us -- a little problem on the communication front as my French is rustier than I’d hoped. So yesterday we drove ALL around the island of Djerba, even getting to use the 4-wheel drive.  Some of the “roads” are better referred to as paths. They are often marked with rock cairns; the sand must obscure the road from time to time.

We drove to Sidi Jemour which was used as a filming location for Star Wars's Mos Eisley. "You will never find a more wretched hive of scum and villainy," said Obi-wan Kenobi. We visited the scene of the entrance to Mos Eisley spaceport, and there are other scenes of landscape filmed on this island – the Cantina, an outside shot of Ben Kenobi’s home, second photo down, and probably more I don't know about. 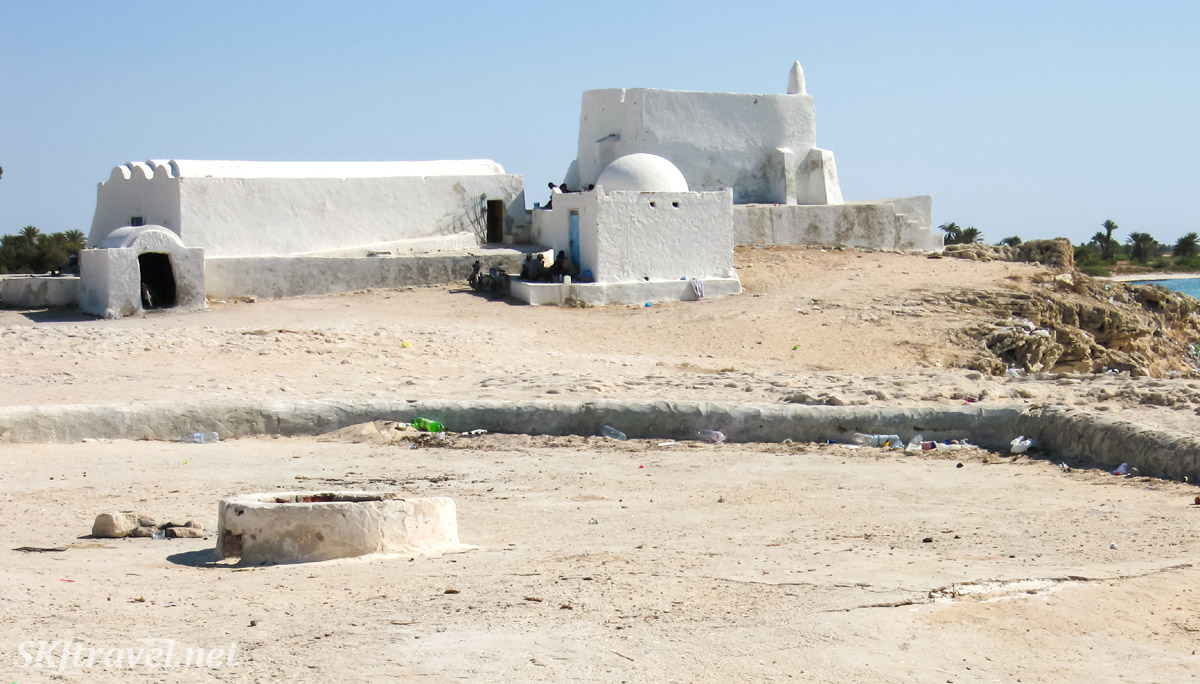 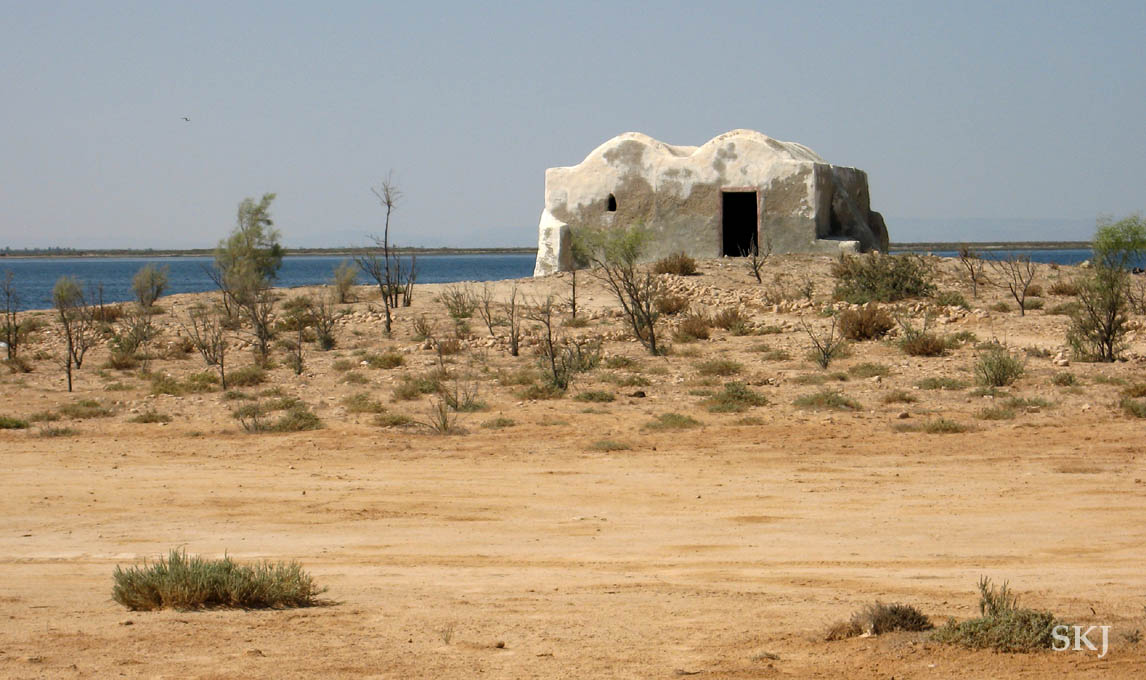 Other interesting things were the tourist beach where the French ladies were sitting around topless and the Muslim women were swimming in the ocean in their clothes – ALL of their clothes, including their head scarves.

Our hotel here is really quaint, an old mansion turned into a hotel with a lovely courtyard.  We had lunch yesterday at a sea-side town, and the menu was a platter of fresh fish brought to our table from which we pointed to the one that we wanted grilled up.  Super yummy. 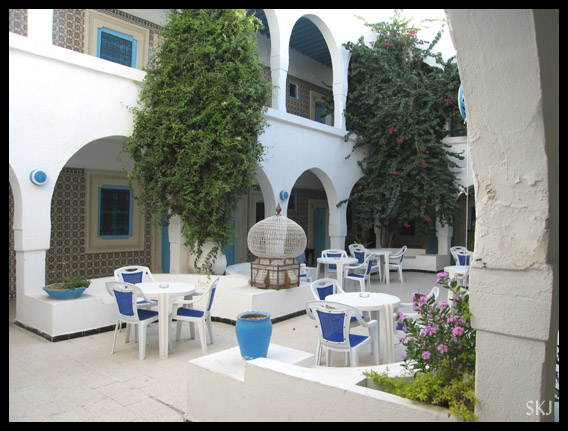 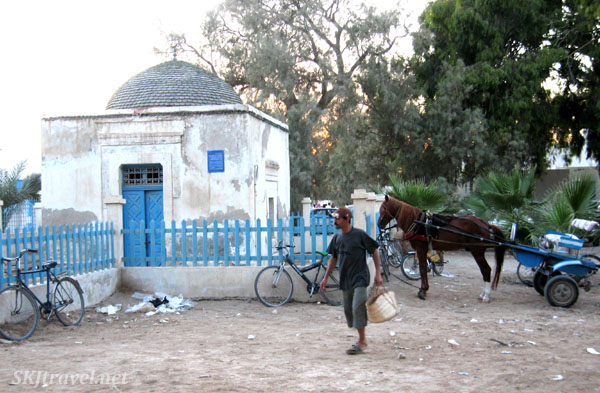 The Fadhloun mosque is maintained for non-Muslims to be able to go inside (normally this is not allowed in an active mosque) and learn about it with informational plaques. It was built in the 14th century. 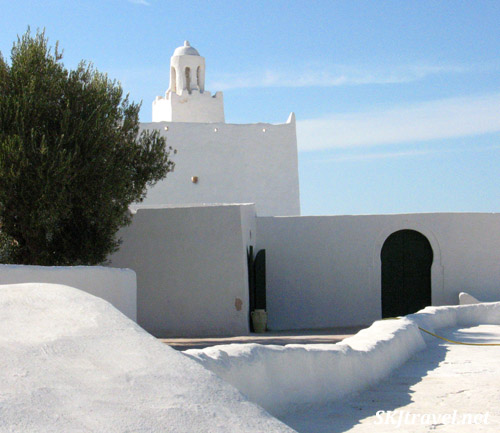 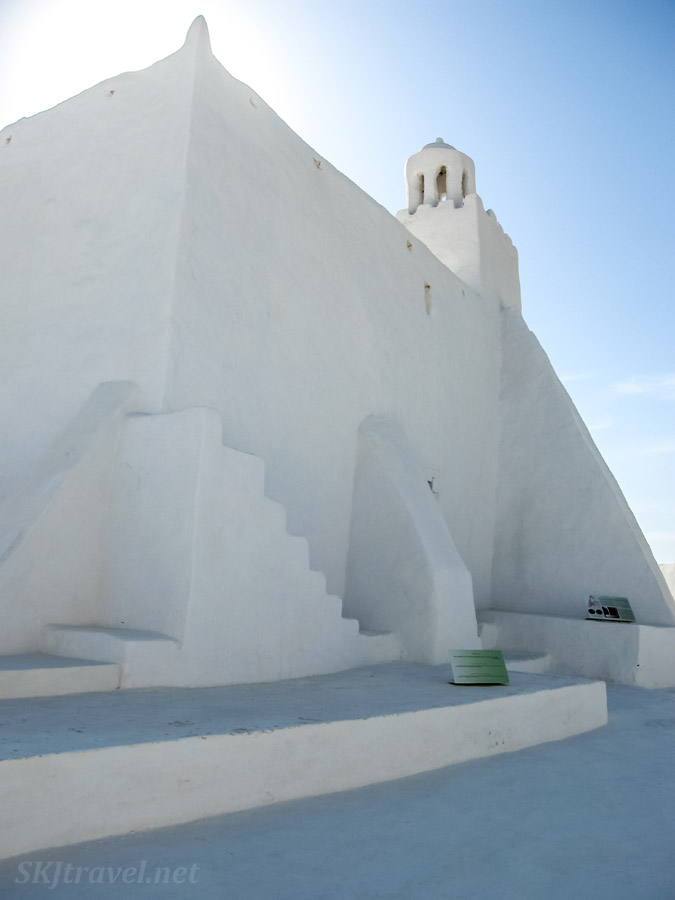 And watch out for sheep, donkeys, camels, horses on the road wherever you may go in Tunisia! We encountered this flock driving around Djerba. 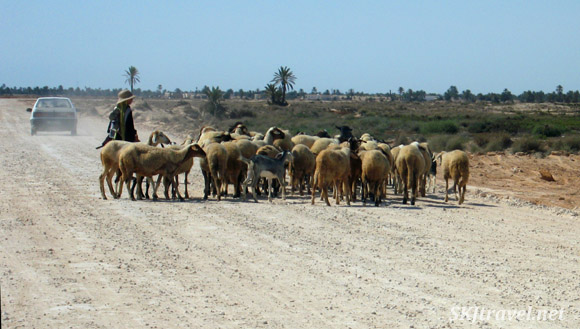 So, some interesting things I haven’t mentioned yet:  There is a small percentage of the population that is Jewish.  We visited a small synagogue, El Ghriba, in Djerba, and it is guarded by police at the front gates and a watchtower. You must pass through a metal detector to enter. Such precautions now have to be taken because in 2002 a truck full of explosives was detonated close to the synagogue, killing 21 people. Al-Qaeda claimed responsibility for that bombing. We noticed in Tunis also that synagogues were barricaded at the entrance and patrolled by armed guards. The locals we talked to indicated that the Tunisians themselves get along with each other -- Jews and Muslims -- and that these acts of violence are plotted by extremists living outside the country. 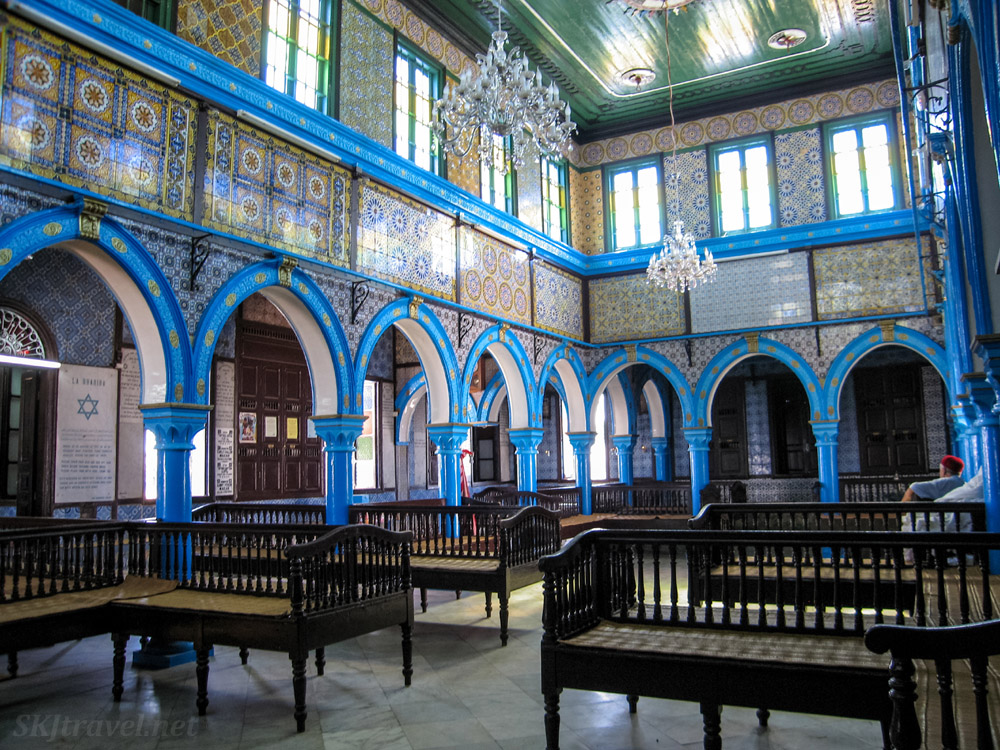 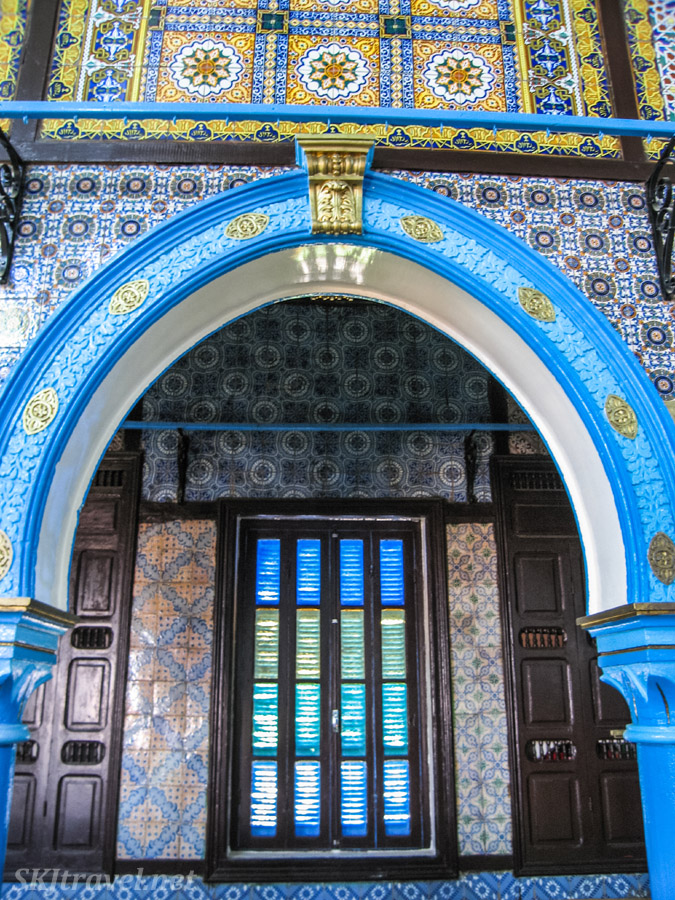 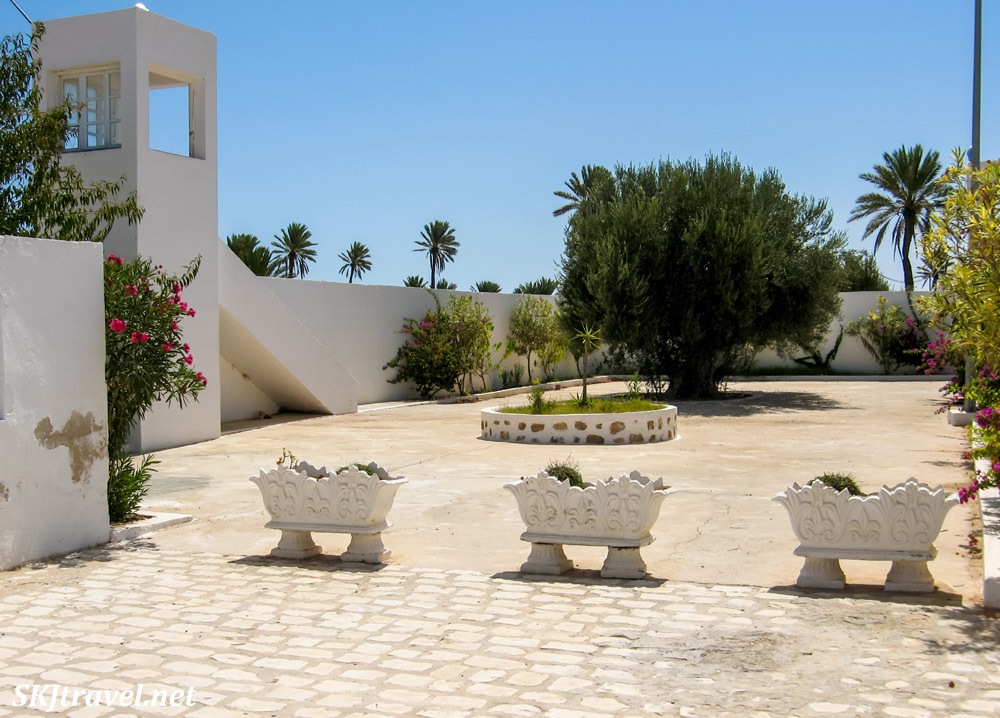 A little note from back in Tunis: our favorite street name so far is "Rue de Dey." (say it out loud and then make evil laughter)  Did I mention also we saw the building that inspired the Jawa sand crawler in Tunis (more Star Wars)? 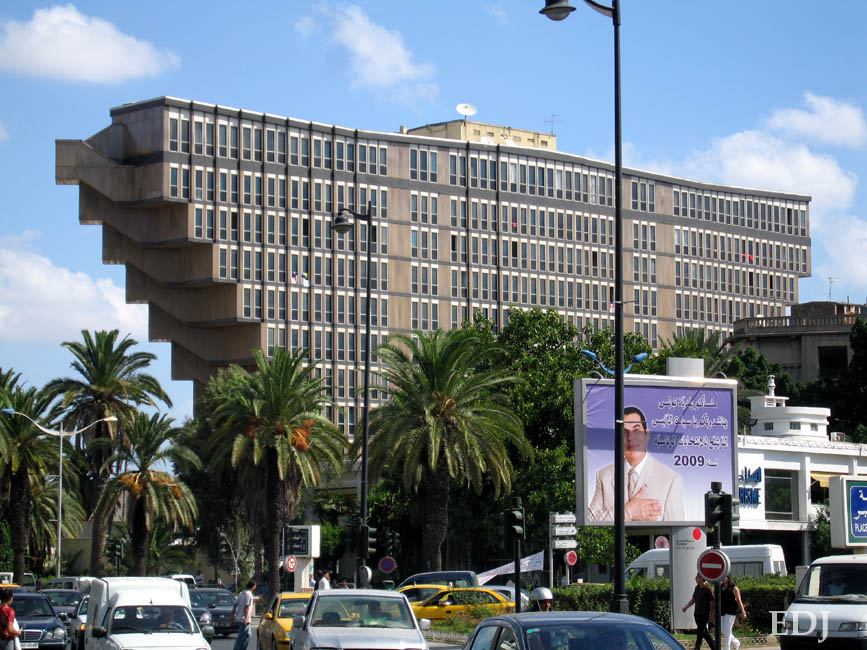 I am getting better at the foreign keyboard; but it is still tedious. So I keep it brief.  I guess we will strike out into the heat now.  Tonight we spend the night in Tataouine (yet more Star Wars).