Sweating It Out Among the Ksars

So, some interesting things I haven’t mentioned yet:  There is a small percentage of the population that is Jewish.  We visited a small synagogue in Djerba, and it is guarded by police at the front gates and a watchtower. You must pass through a metal detector to enter.  In 2002 a synagogue in Djerba was bombed by Islamic extremists (probably not from Tunisia, where Jews and Muslims have coincided peacefully).  We noticed in Tunis also that synagogues were barricaded at the entrance and patrolled by armed guards.  It is too bad. 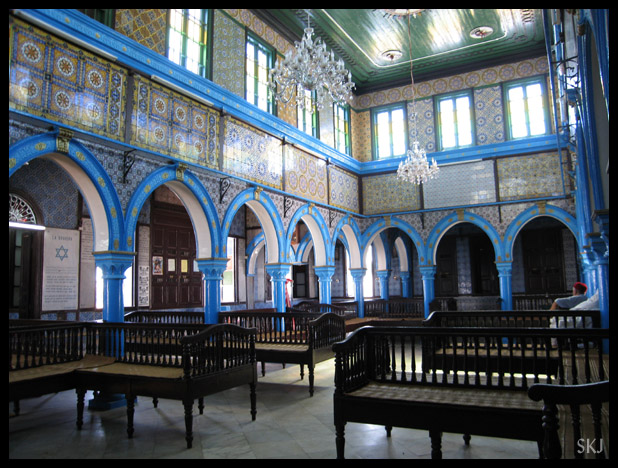 On our way driving from Djerba to Tataouine, I saw a "camel crossing" sign along the road, and Erik turned the car around for me to take a picture of it.  We then noticed along a ridge a line of old WWII-era tanks and trucks.  We drove up there and found this eerie graveyard of tanks and trucks and heaps of twisted metal, just bombed to pieces.  We poked around for quite awhile, and then out of literally nowhere a military Humvee with two guards came driving up to us to see what we were up to; but in the end they didn’t mind us there. We think it was a French-Tunisian armored column, based on the components of the vehicles. 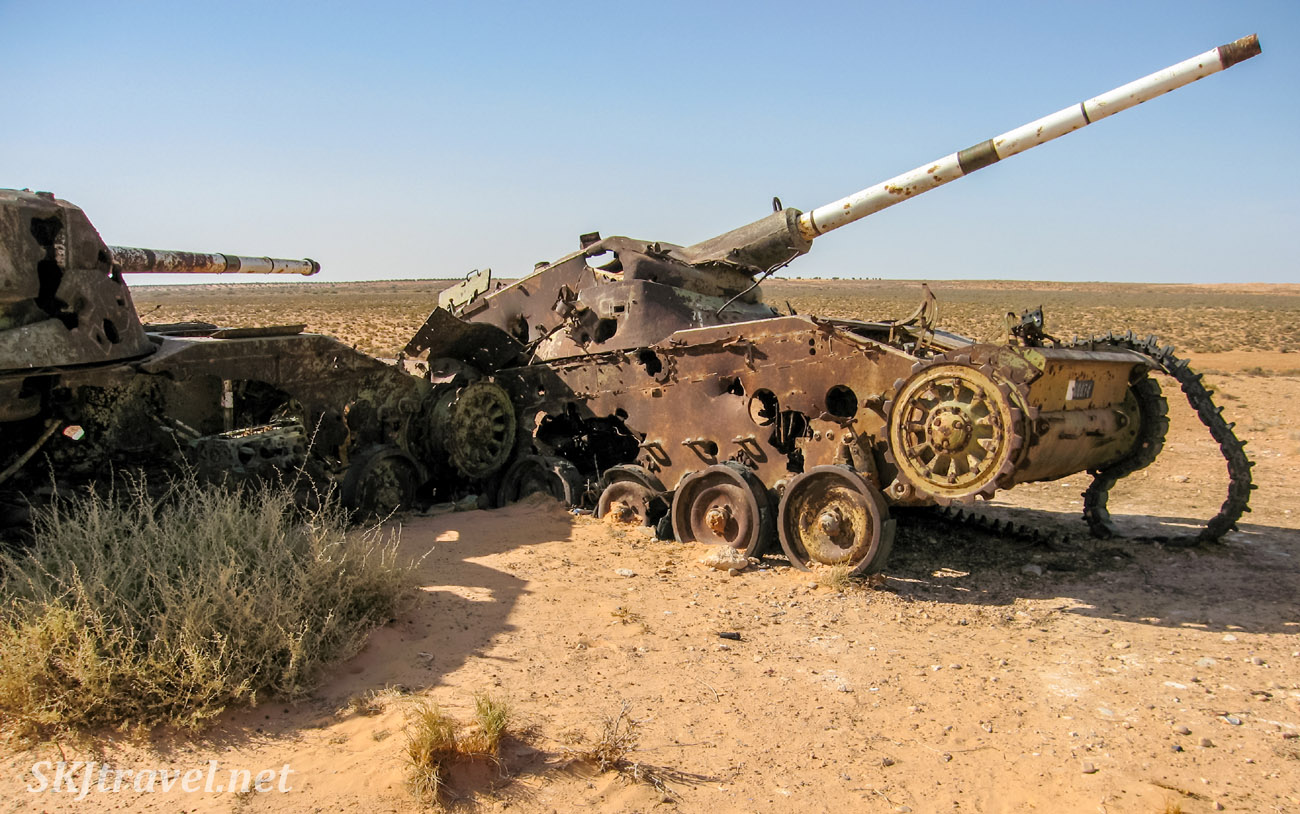 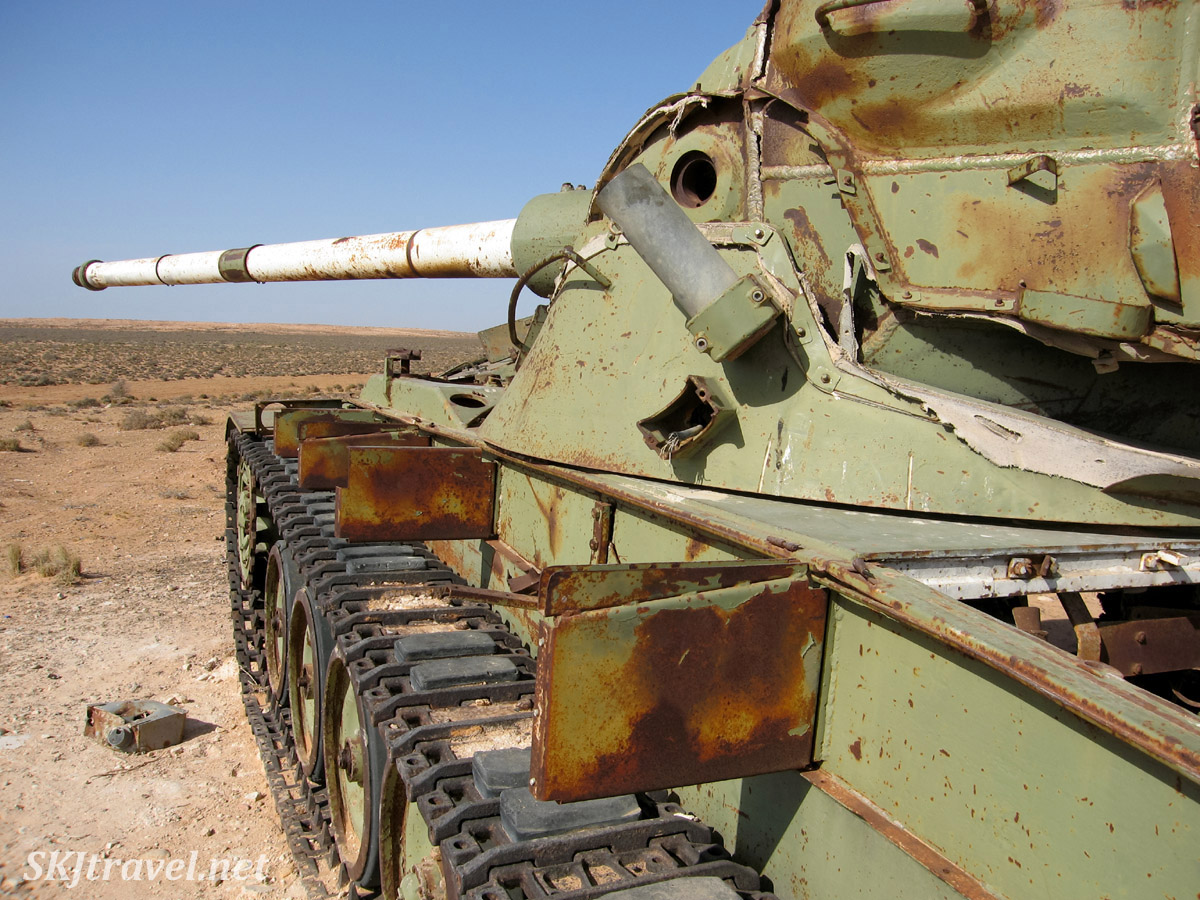 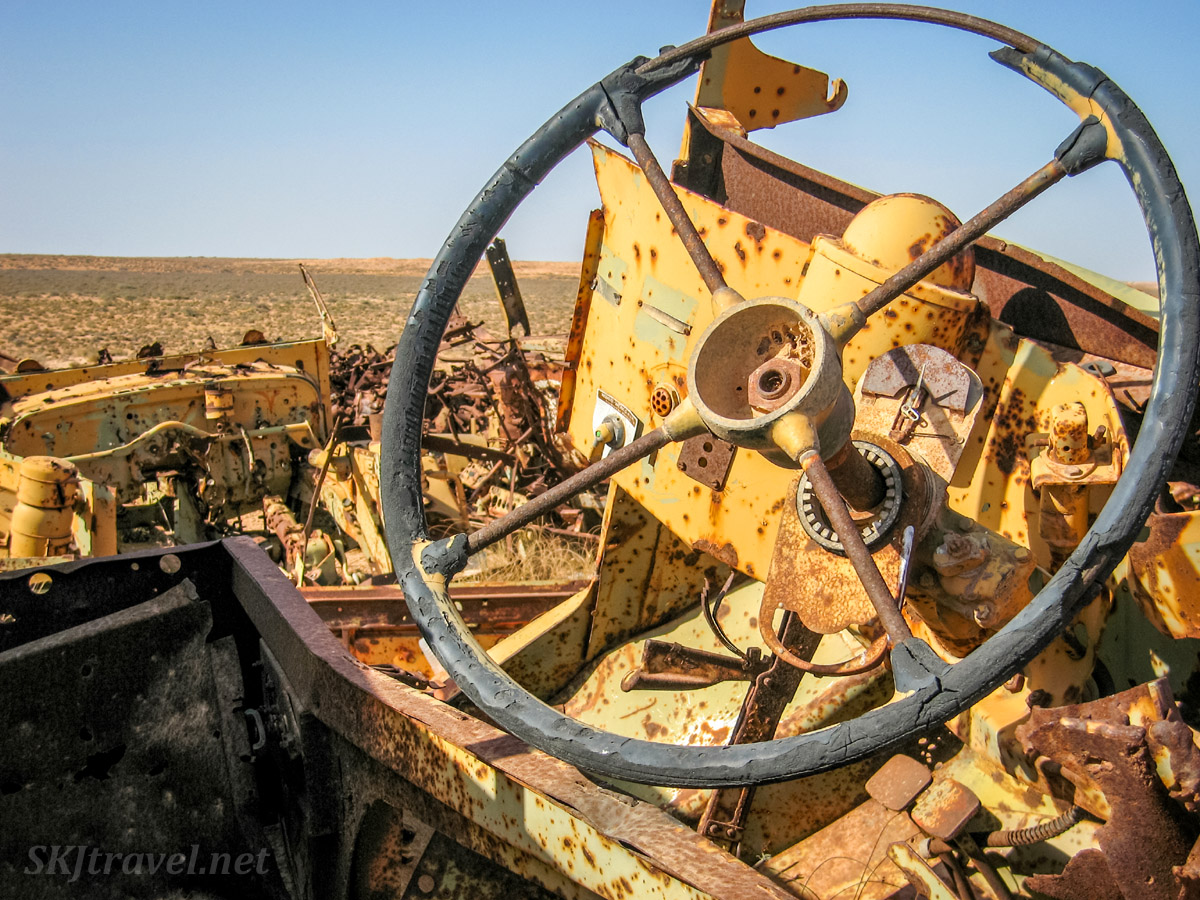 So our favorite foods here are the harissa, which is a zingy hot paste made from red hot peppers that you mix with olive oil and dip your bread into; every restaurant serves this as part of the meal.  Each harissa is a little different, and most interesting is the way the hotness is different in its delivery – sometimes a building hot, sometimes immediate hot that subsides very quickly, etc.  The other food is a "briq" which is a deep-fried pastry-wrapped omelet, sometimes with meat or seafood, or just egg.  Yummy.

The hotel we are staying at in Tatouine is very nice, with a swimming pool.  And right now we are the ONLY guests.  They mostly cater to tour buses, but there are none right now.  Last night for dinner and this morning for breakfast, they opened the kitchen just for little ol' us.  It's a bit weird being in this big hotel all by ourselves. But boy that swimming pool sure feels nice; it is really really really hot.

Yesterday will surely rank among the highlights of our trip. Of any trip. Just the sort of day we love:  we drove around to different abandoned ruined cities, called ksar (or ksour) – the traditional Berber villages – and had most of them completely to ourselves to wander through and explore.  One of them stretched for at least a kilometer along a ridge.  The ksar started out as granaries and storage built by nomads, built on the top of hills and ridges.  Later the people became more sedentary and agricultural, and they built homes and villages below, into the hillsides – somewhat similar to the yao in China, like man-made caves.  The first was called Douiret. Even though it was scorching hot, we had such a blast exploring, felt kind of like archaeologists discovering a fabled lost city. 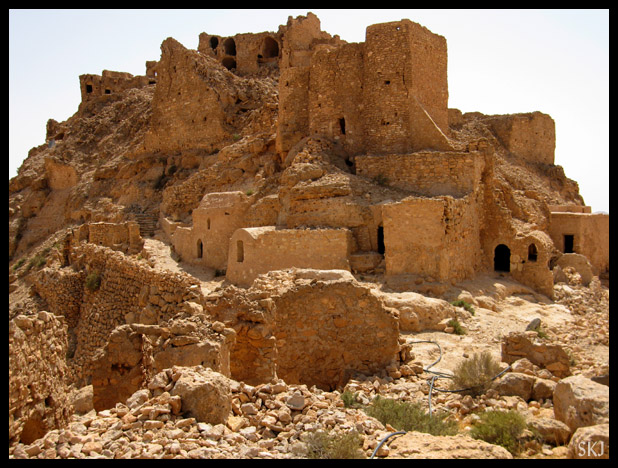 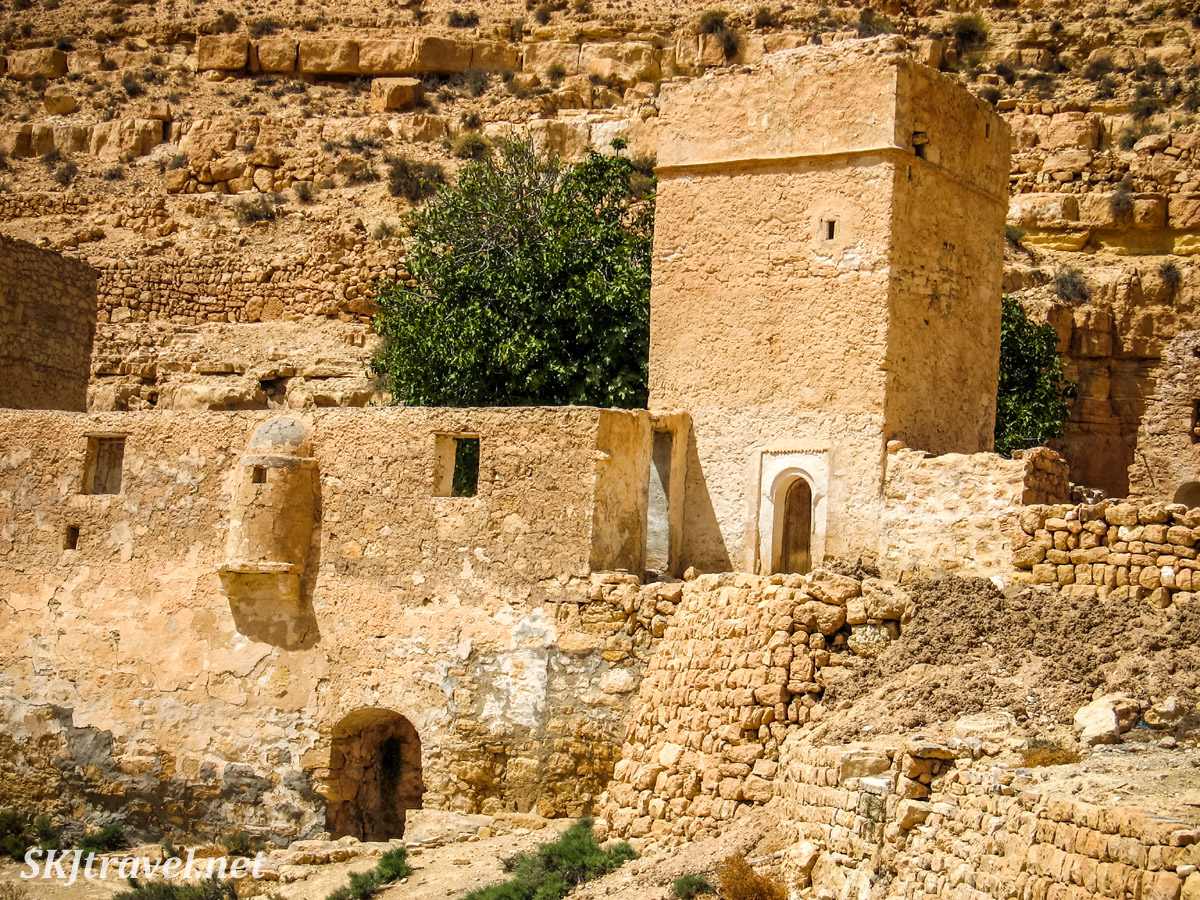 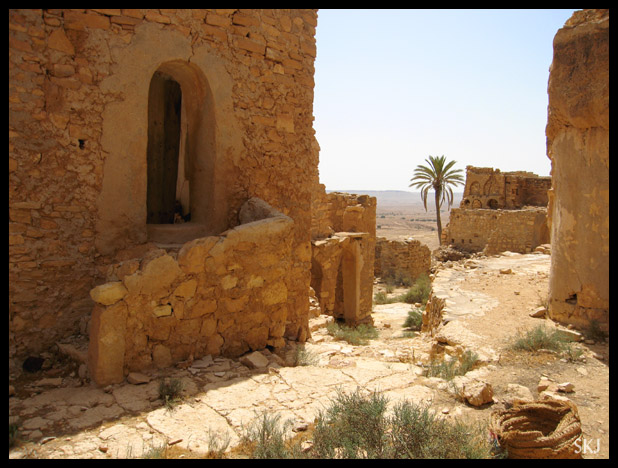 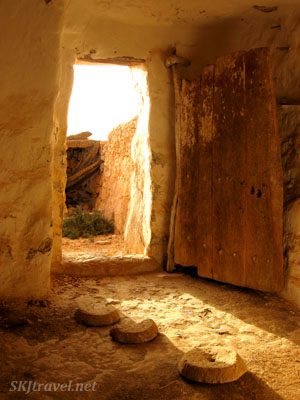 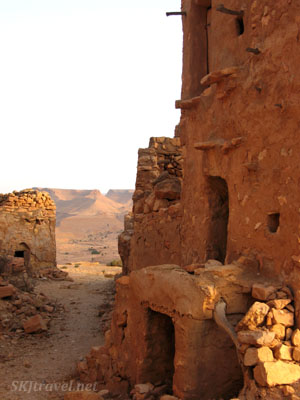 The second one we poked around extensively was called Guermessa. The people abandoned these awesome homes and simply moved down the hill into the valley into "New Guermessa." I don't understand why they would leave such a neat village and build little box houses just down the hill. Very much like the situation in Dang Jia Shan, China. They have mosques and olive presses and all kinds of things dug completely into the hillsides.  Many of the homes are still littered with items left behind: crates, huge amphorae-like pottery, school papers, bottles, tools, shoes, suitcases, lanterns, tea pots, etc. It was terribly interesting poking through all the homes and running across such unexpected things as the olive presses and all of the everyday living items.  Since we were all alone in these extensive ruins, it really gave us quite a mood of adventure.  The views from the very tops, where the oldest granaries are, are impressive. 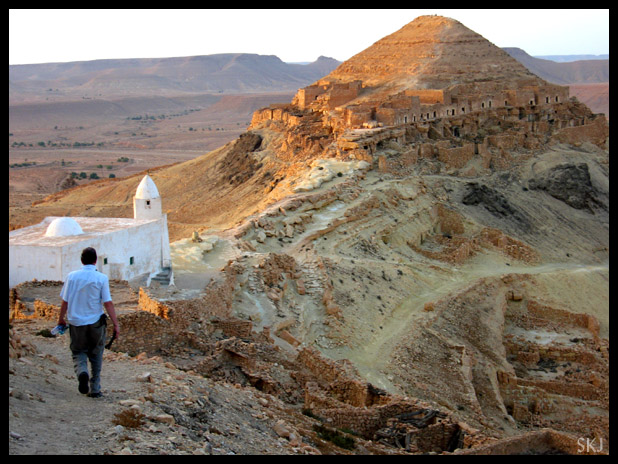 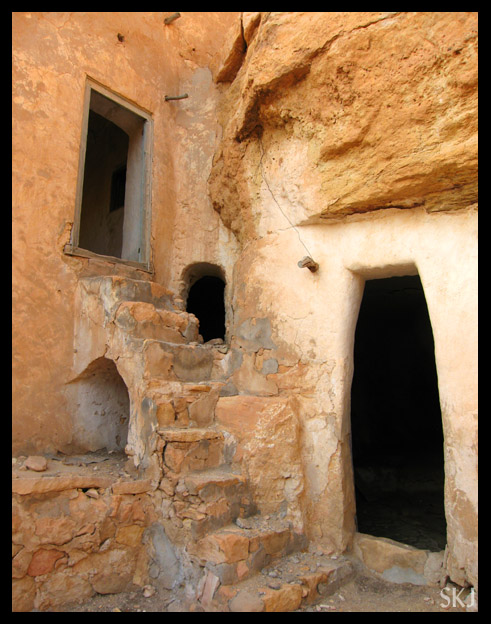 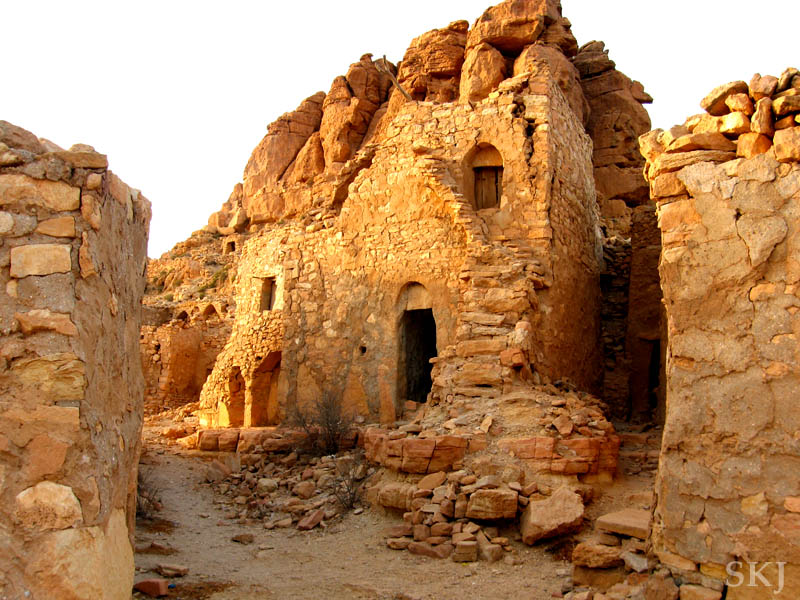 Some views inside the homes and buildings -- most were whitewashed and contained walled-off rooms in the innermost portion of the dwelling dug into the hill. Nearly all had some sort of "litter," be it some number of massive jars or lanterns, pots, clothing, food tins, papers, etc. Some storage rooms had heaps of huge storage jars. At each abandoned village we found a room with an olive press in it. 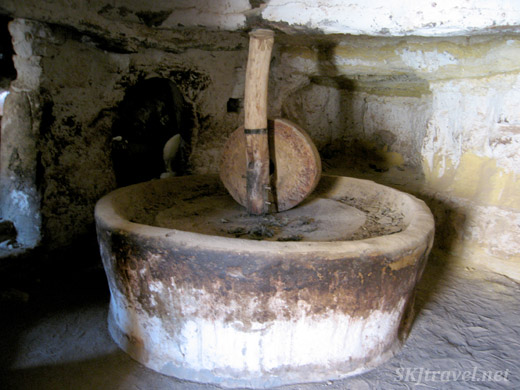 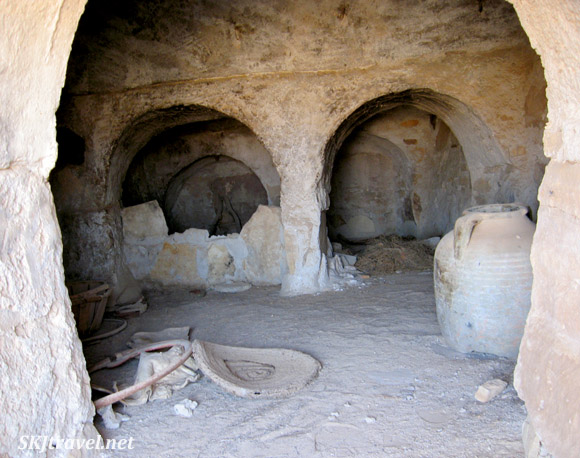 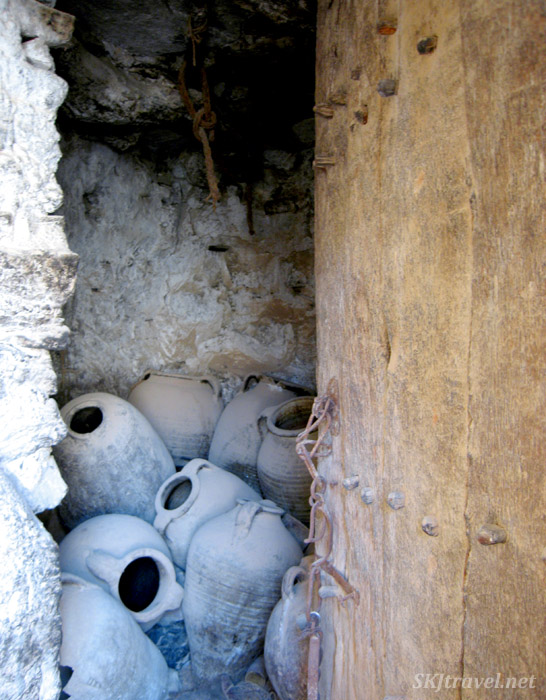 Today we've been to a little ksar that was used as the set in Star Wars Phantom Menace as the Mos Espa slave quarters.  Small, with some tourists, but still fun to see.  We are now off to visit two more ksar.  You might think that if you've seen one you've seen them all, but this is far from the truth.  Each one has had quite different features architecturally. (we've been to 5 ksar so far). This, of course, is well documented in our approximately 1.2 gazillion pictures. 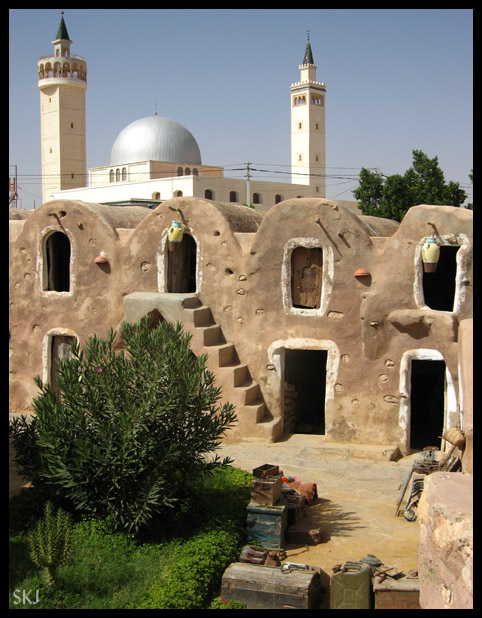 And here is your completely random photo of the day: 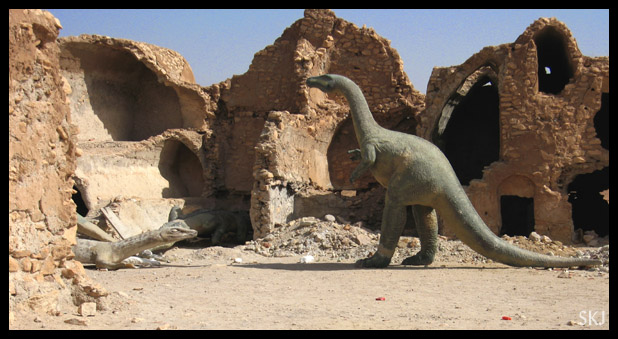