Peppered Out in Tabarka - Beaches, Forts and Sand Castles 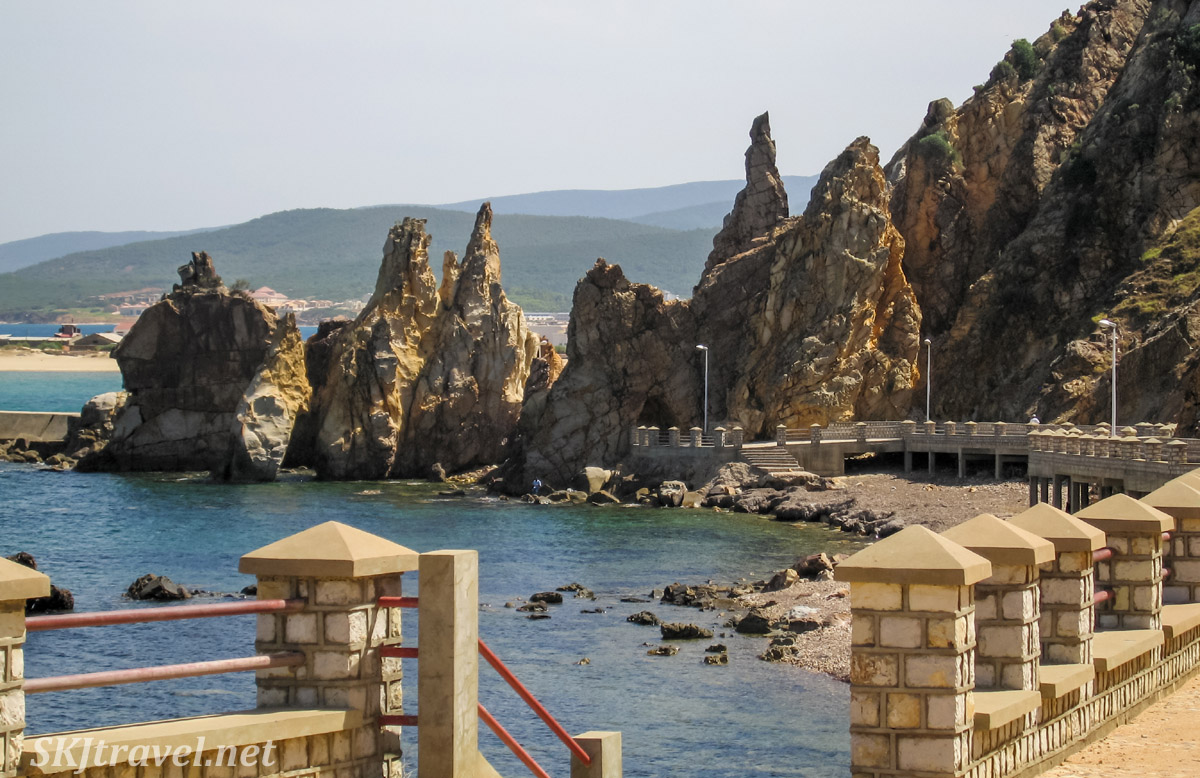 From Kairouan we drove to the coastal town of Tabarka to stay in a little apartment (our timeshare trade).  When we arrived at the address of the hotel, we found it totally abandoned, the pool drained... We were a bit downcast, since we had reservations to stay here. Finally some man clued us in that it had moved. Our place is actually very nice with a lovely sea-view balcony. 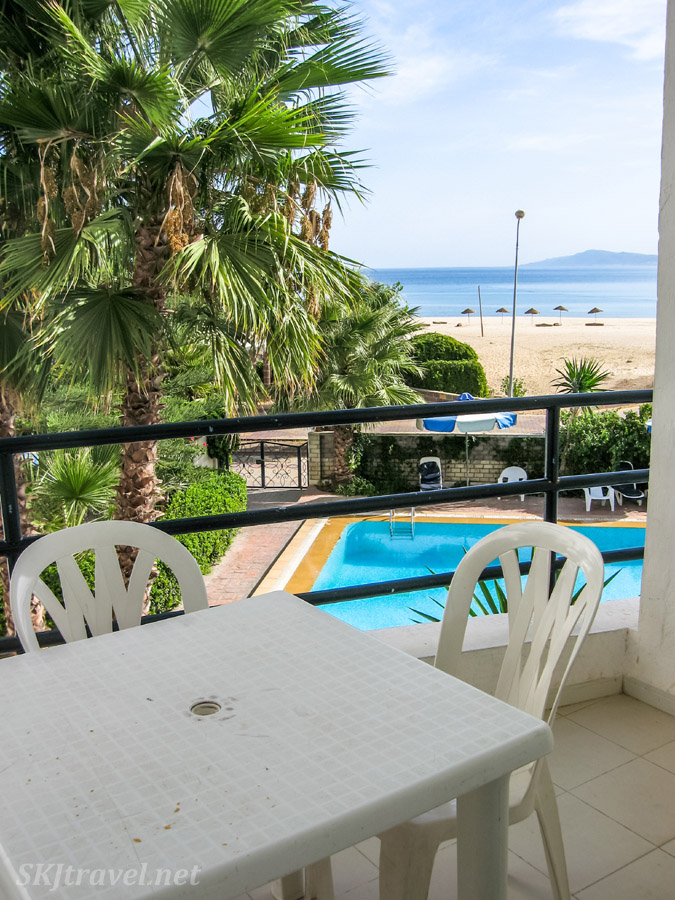 We go shopping each day for fresh bread to eat with our harissa we bought at the grocery store. At the 4-star hotel down the beach we talked the guard into letting us in the back gate to have beer at their bar, since you can't buy it in any stores during Ramadan (which we are in the middle of). The fancy 4- and 5-star hotels are gated; I guess to keep out riff raff like us. 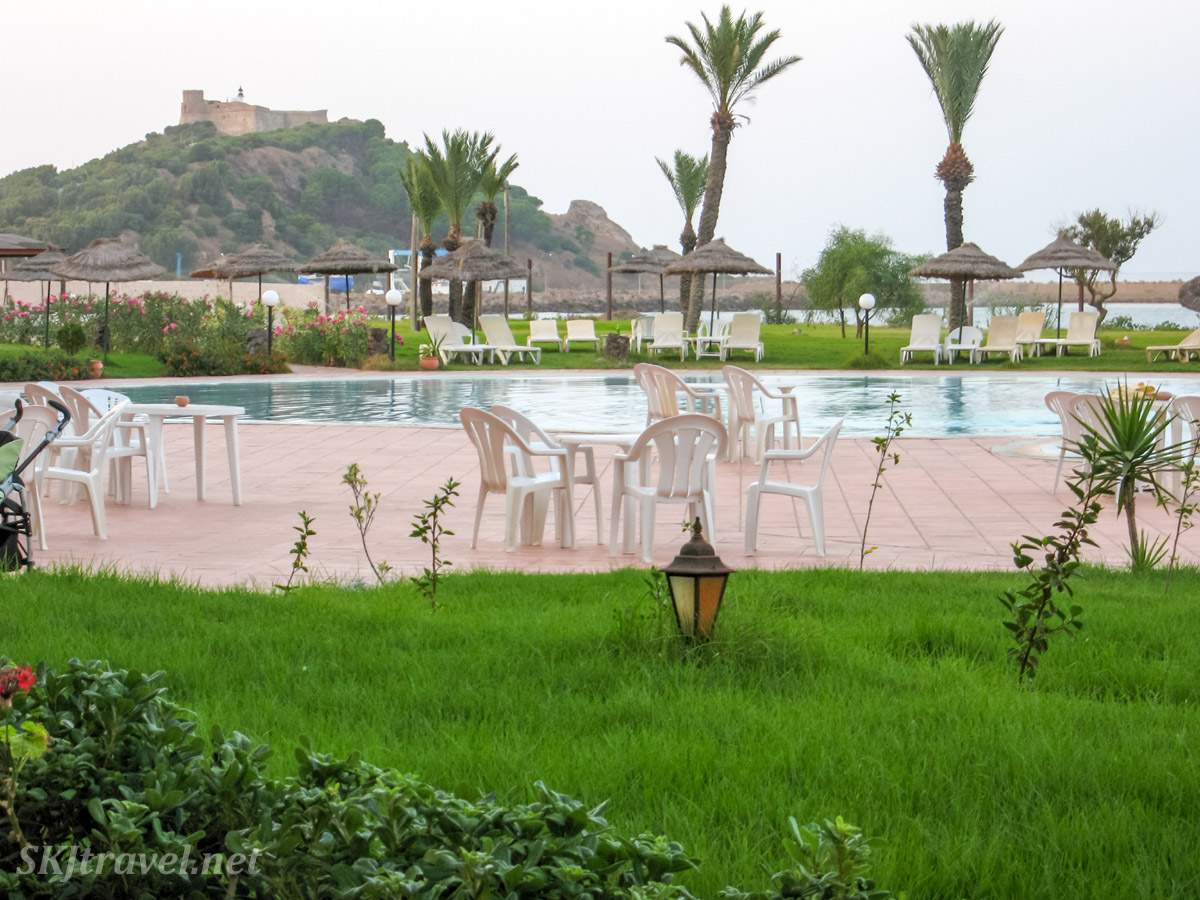 Tunisia makes one beer, "Celtia," and fortunately it is quite a tasty one at the end of a long day, so it's worth making the day a wee tad longer to worm our way into a fancy hotel to get one. 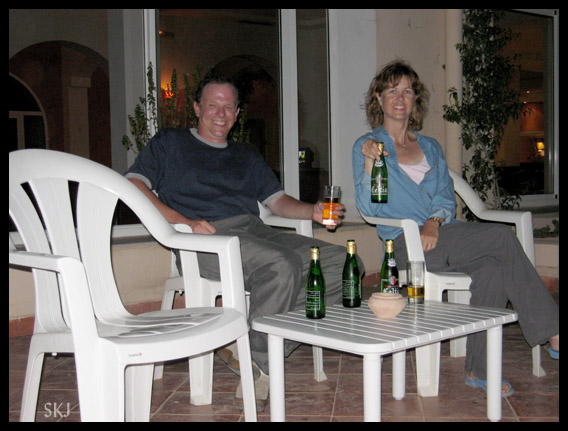 Erik had a little "incident" the other night cooking dinner at our apartment here in Tabarka – he diced up a hot pepper that didn't seem very hot, and then touched his face, like his nose or something, and his whole face "lit" on fire.  He started running around the room frantically. If it had been me, I would have been beside myself with this discomfort, but since it wasn't me, I couldn't stop laughing (Erik understood). Finally, he tore off his clothes and ran into the shower and stayed in there awhile with some soap; and eventually his face returned to normal.  But whewy what a pepper.  What's really funny is that in the food it didn't taste very hot after all that.

So today we mostly spent hanging out on the beach with the Mediterranean Sea. If no one else can, I'm sure Erik's family can guess what we did:  Build a sand castle, of course.  We made a medina (we always try to be appropriately cultural in our sand creations) with a mosque and fortified walls and maze of streets and stairways into the walls like the ksars ... it was a pretty good one, and numerous people walking by on the beach stopped and took photos of it.  One guy even had his girlfriend pose next to it; I wonder if they'll tell their friends they made it. 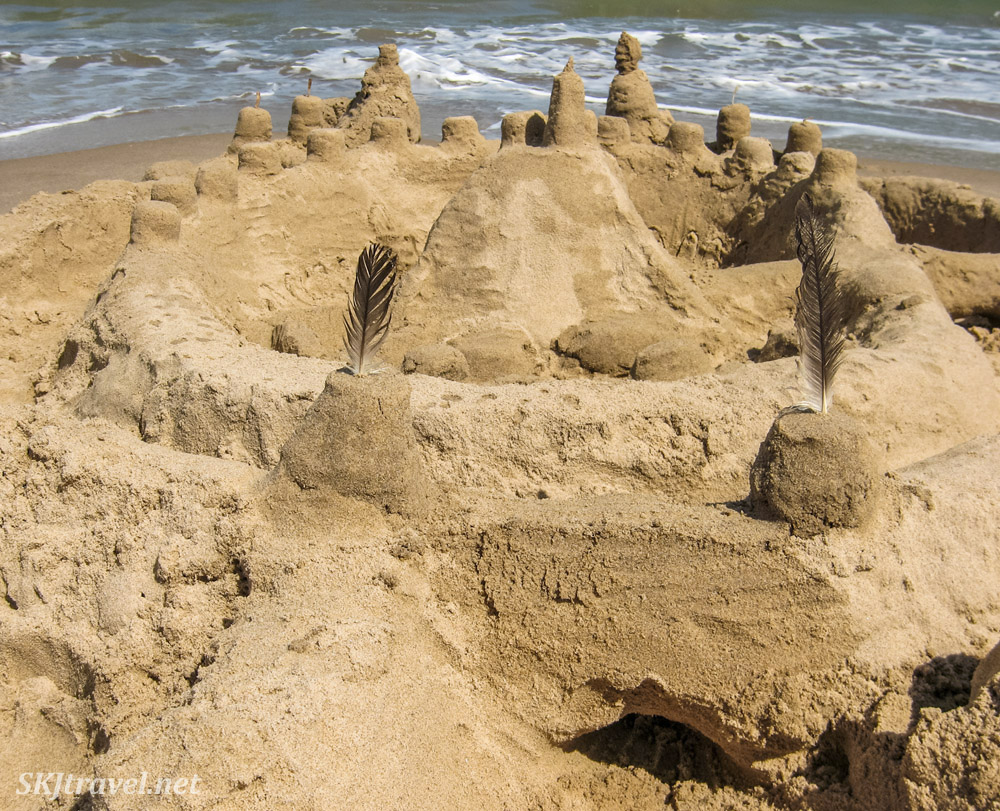 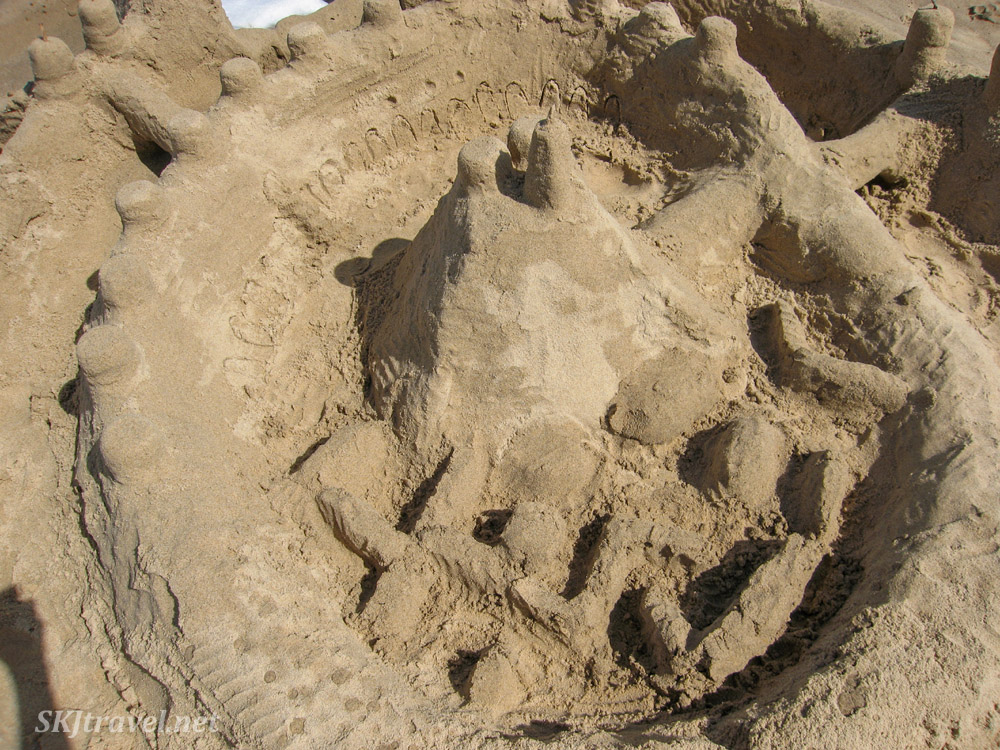 Another day we walked up to a big fort on a peninsula sticking into the Tabarka port, and there was a sign saying it was closed to tourists. But there were no fences preventing us from walking around the base of it, so we did, and then when we got to the huge doors of the fortress, a man peeked out and opened them for us (he'd seen us walking up). And so we had a nice little tour, just the 2 of us, around the inside. Goes to show you shouldn’t always obey the signs. 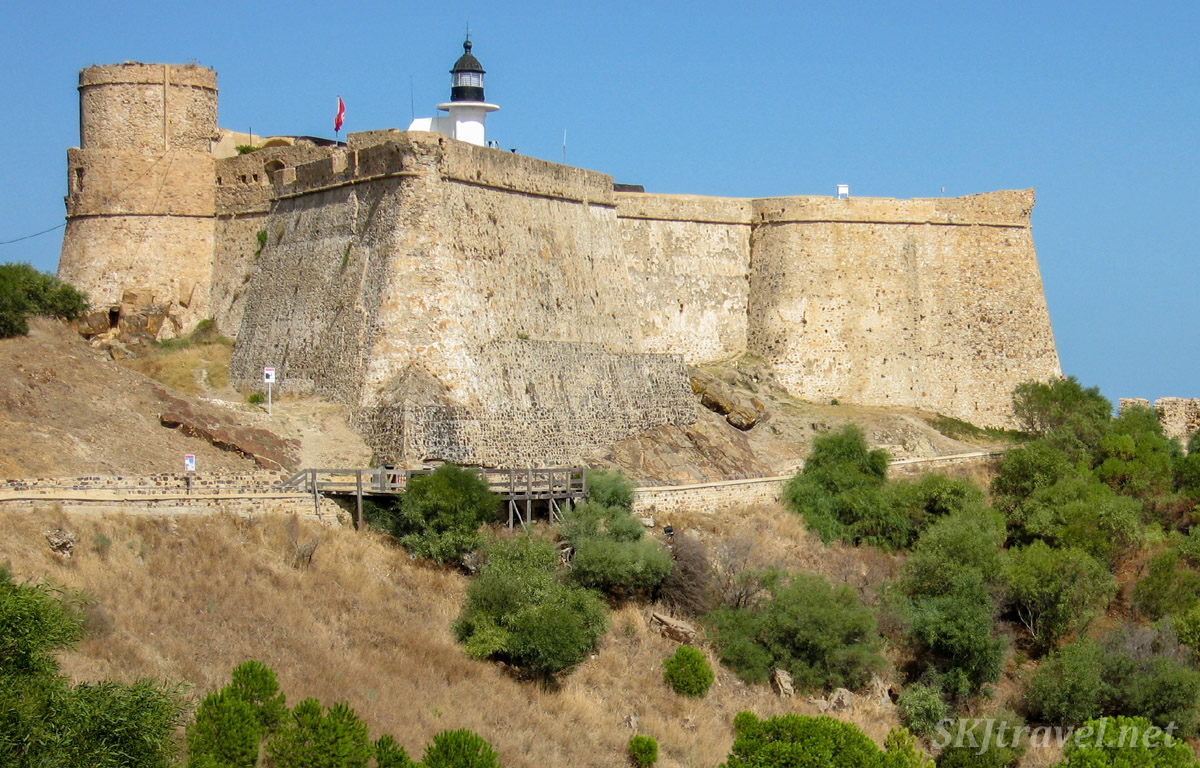 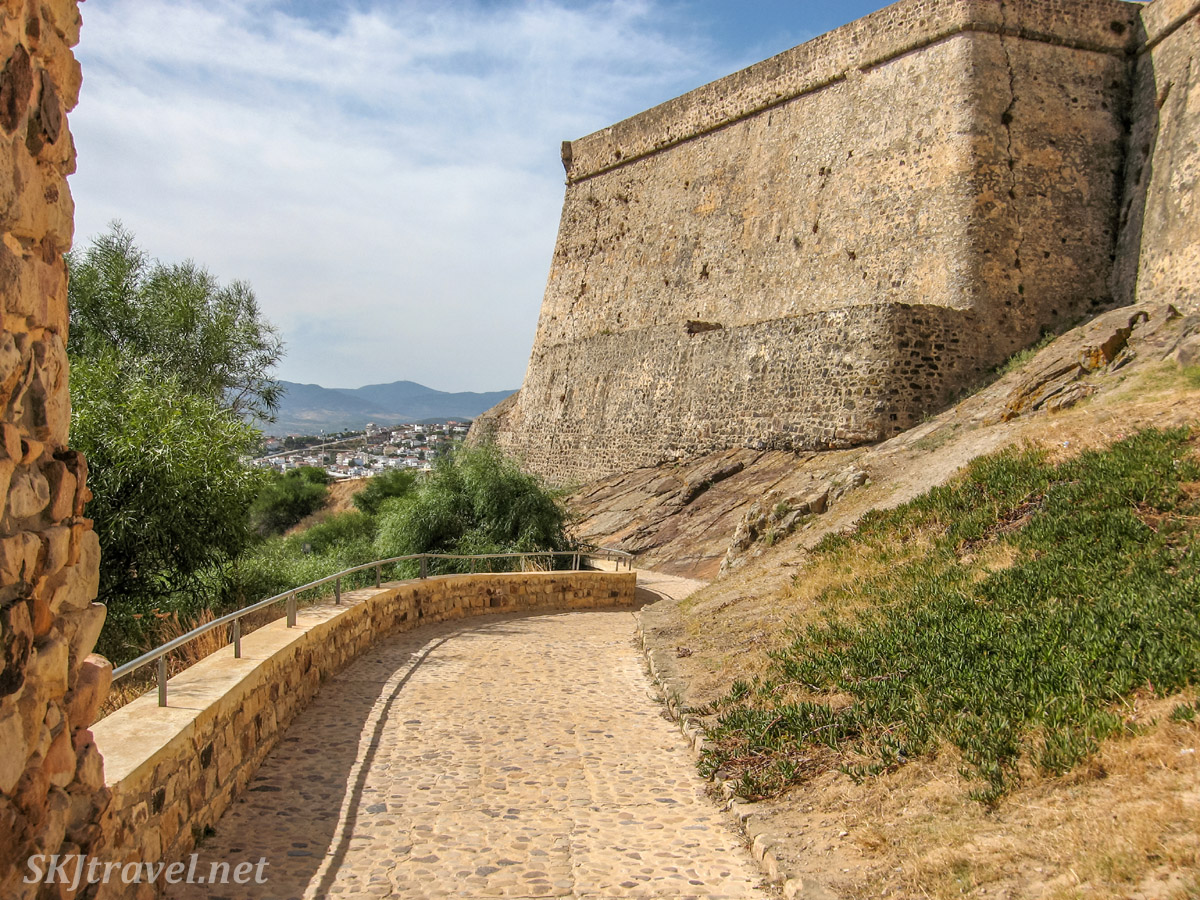 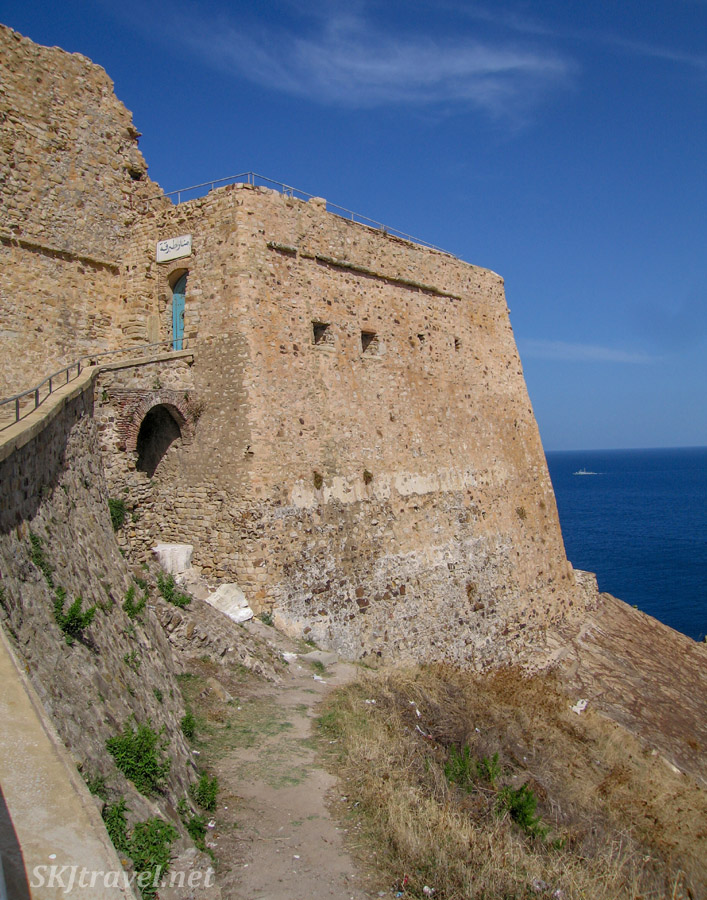 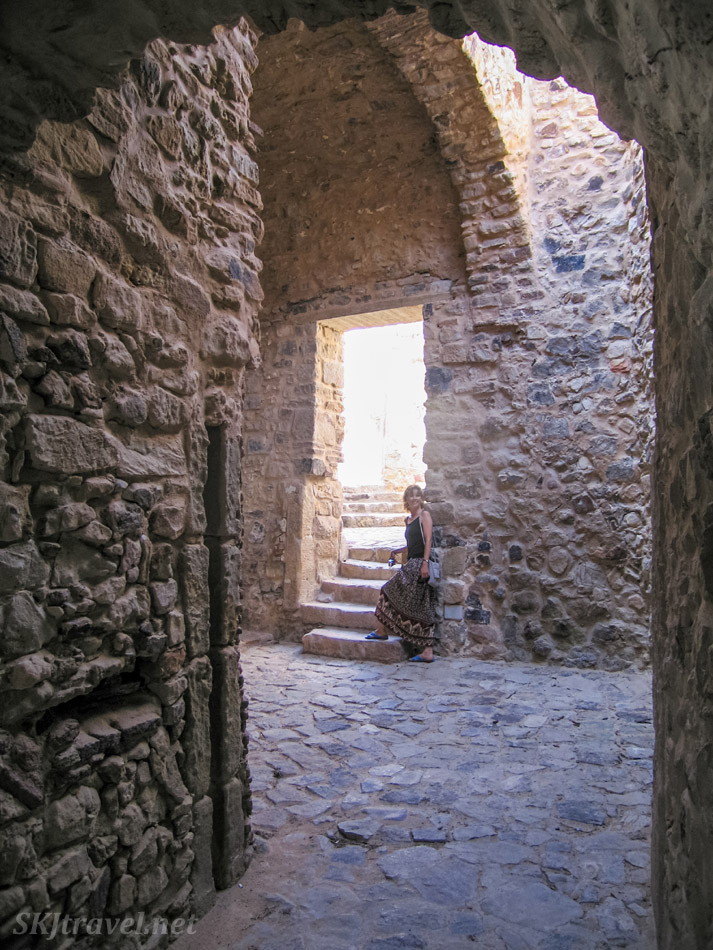 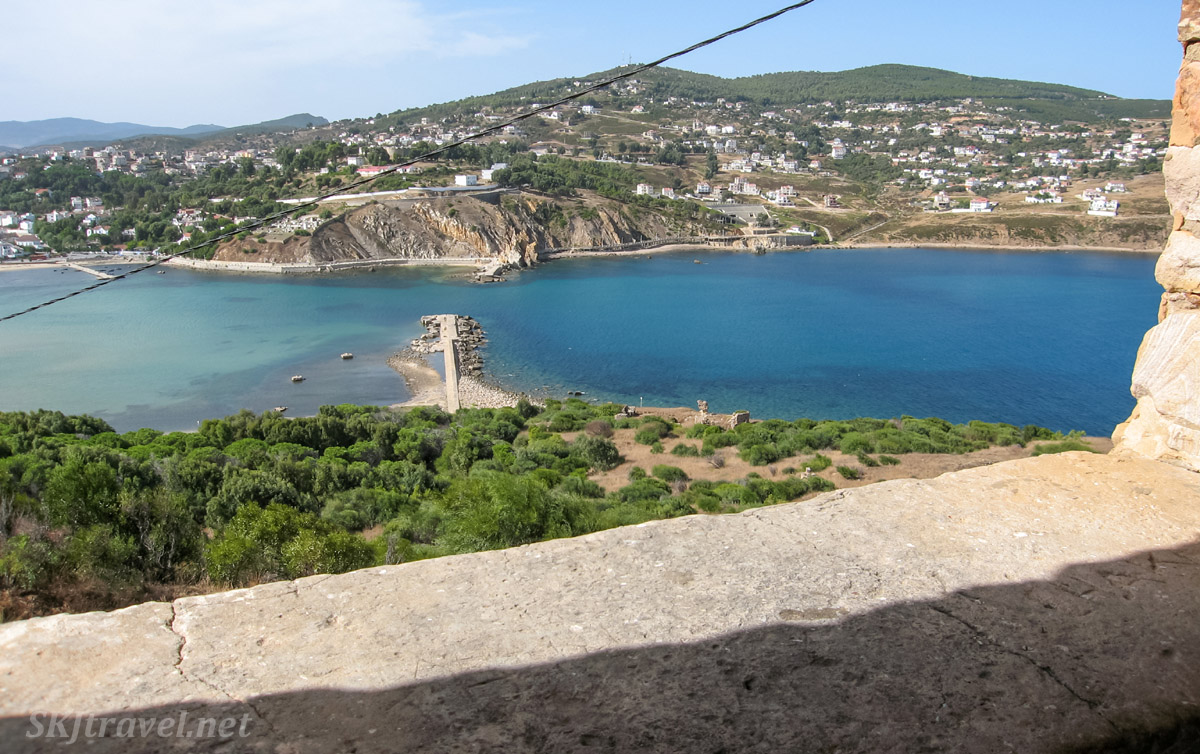 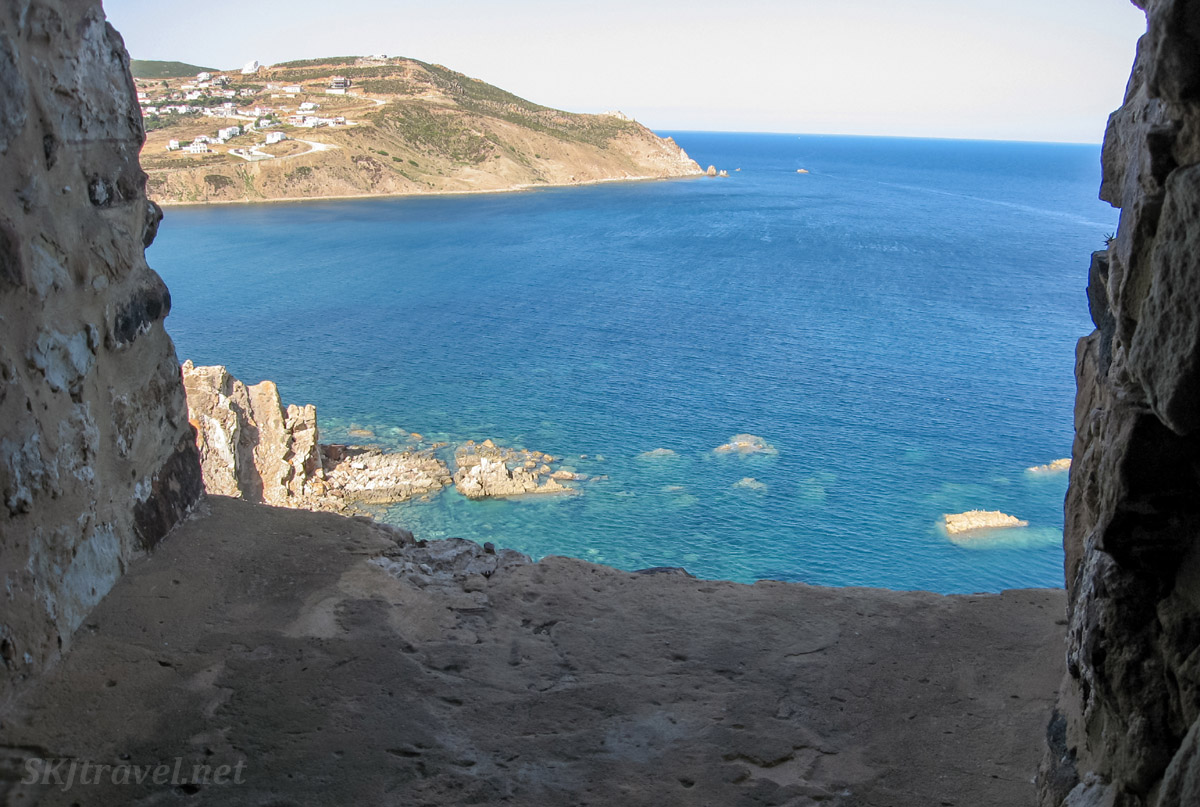 And another day we struck out in our trusty truck to try to find a point on the map marked as a scenic 360-degree view. Turns out we could not have made it without the high-clearance truck. We ran into another couple nearly stuck in their regular car trying to turn around. We do love our "camel truck," as we have come to call it. 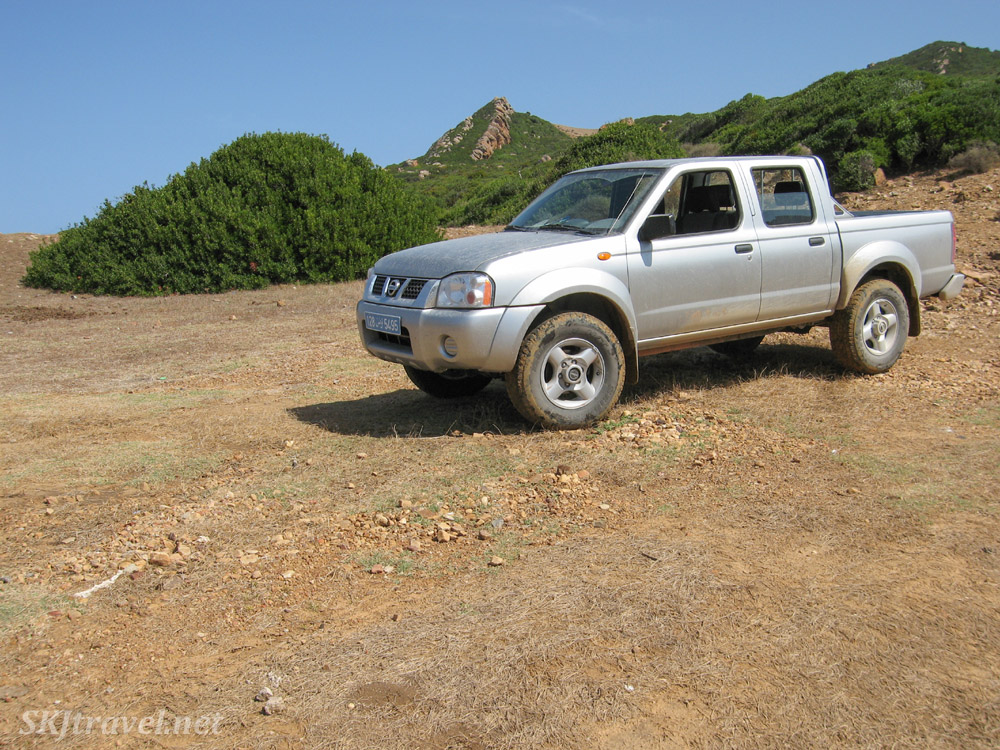 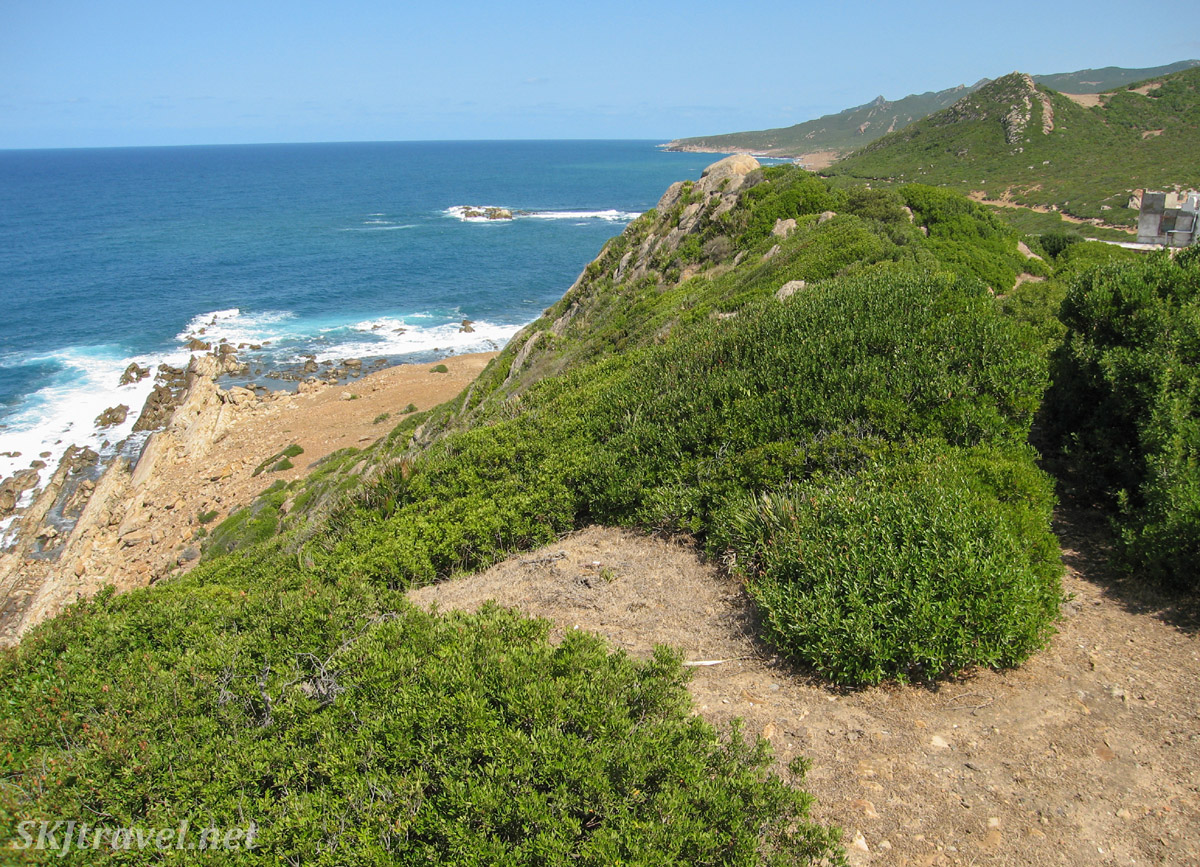 Indeed the point lay at a small tip of land jutting into the ocean. Some men approached us and it took us awhile to figure out what they wanted ... they wanted us to sign a log book. They seemed to work in an official government capacity, and we got the feeling that people often left and returned to the country from this point by boat. There were a lot of jelly fish on the beach and a friendly horse loitering about. 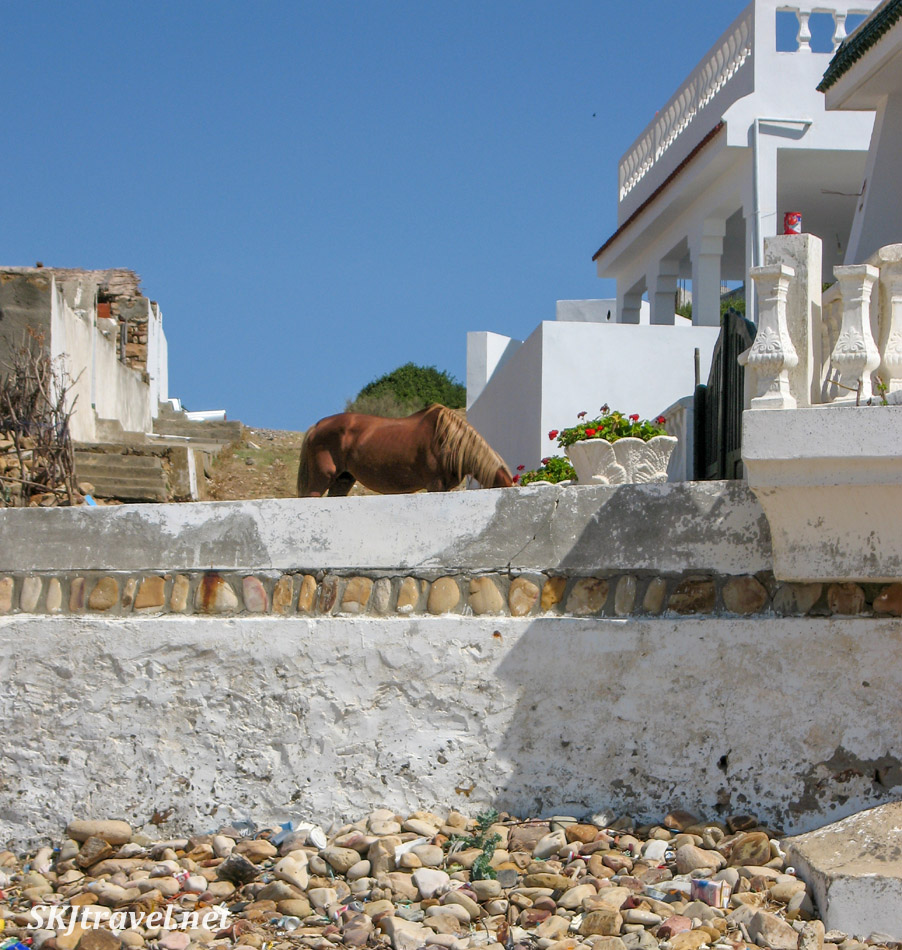 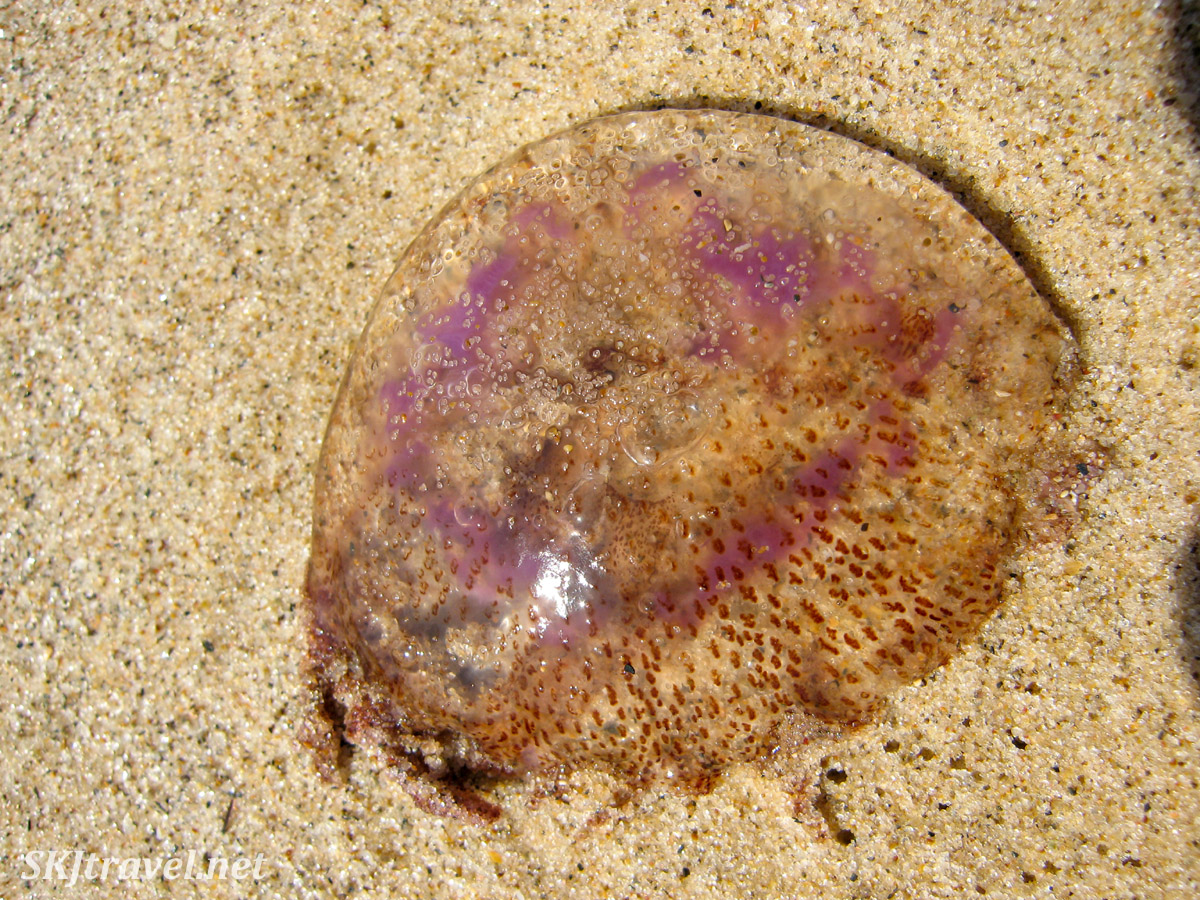 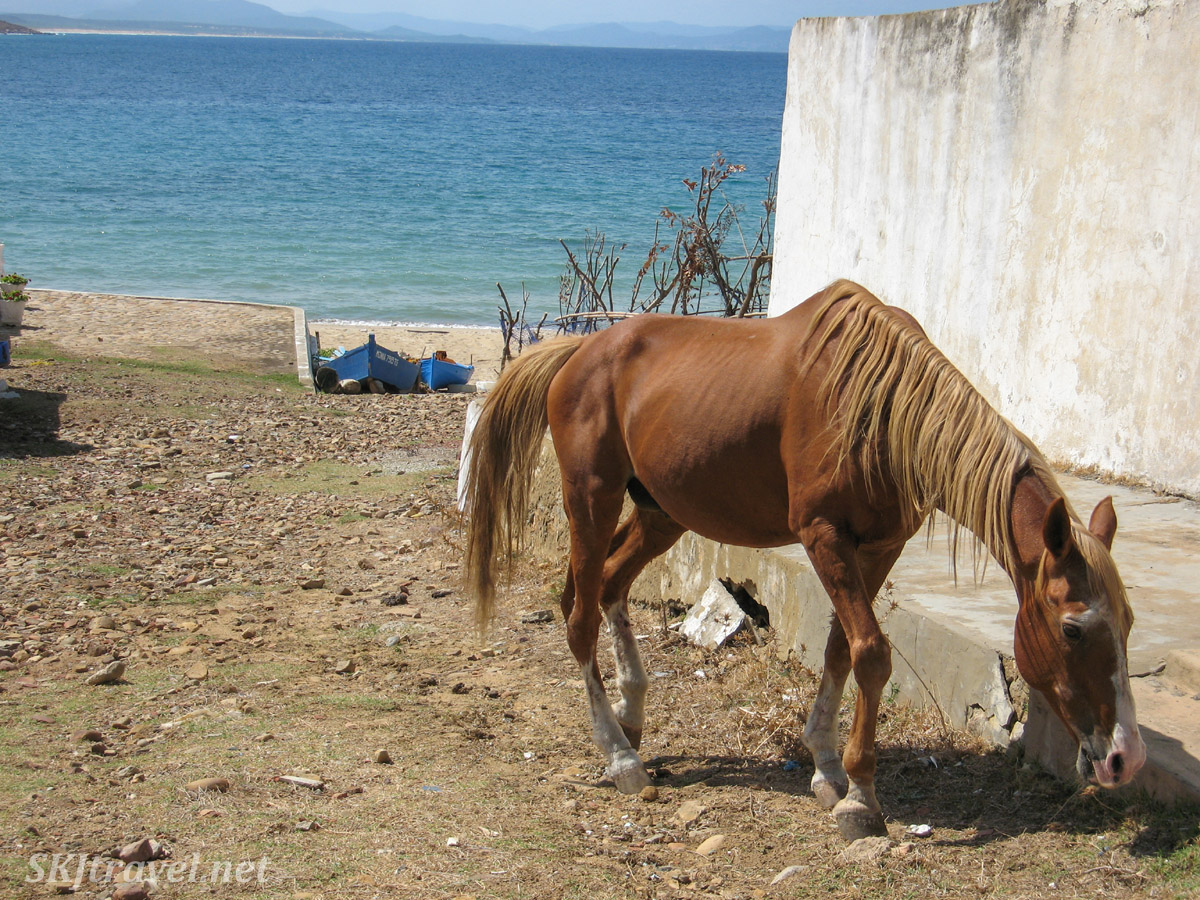 We gave a lift to one of the fellows who had us sign the log book ... you can read the brief tale of our aromatic passenger in my Tuesday Tale, "The Swanky Hitchhiker."

Some random things of interest I thought to write about:

Many hotel rooms have stickers with arrows on them, affixed to the wall or ceiling or to a mirror; they are arrows pointing toward Mecca so Muslims know which direction to face to pray inside their hotel room.

The coffee served in most hotels as part of their included breakfast is the color and consistency of motor oil. You have to add half a cup of milk just to make it look as black as American black coffee.  The little shot glasses of coffee they serve at cafes, Erik has labeled as "moist coffee grounds," and literally there is a film of grit left on his teeth after he drinks it.  I stick to the mint tea, which is quite delicious.

Besides the occasional tourist, there are never any women sitting in the cafes.  Dozens of men sit at any given cafe, but no women.  It's a bit intimidating to walk by.  On a crowded street, you will usually see about 80 percent men and the other 20 percent divided between women and children.  Women are more prevalent in the market places, but otherwise in the cities they have a low profile.

I was saying the other day how we don't know what the men here do since they are always sitting by the side of the road during the day. Similarly, we can't figure out when the children are actually in school.  They are perpetually walking along the roadside in huge herds, either on their way to or from school – always in transit.  When are they actually in the classroom? It doesn't matter what time of day we drive on the roads near towns, they are lined with children with their school uniforms on and backpacks.

Then there are the sheep and goat carcasses hanging everywhere.  This is something I remember vividly from many years ago in my dad's photos from Morocco.  There they are, just swinging in the breeze along the roadsides. And one day in the medina in Kairouan, some guy was casually sitting with two severed goat heads lying on the table next to him -- he wasn't selling them or anything, he was just hanging out with them.  These scenes just crack me up; so strange to us Americans.

And then there were the guys standing along the road from Kairouan to Tabarka holding up dead fish in their hands. Just like fruit vendors sell fruit along the road, these guys sell fish.  But I don't know why they don't just make a sign that says "fish" rather than literally holding one up all day.  I shudder to think what their hands smell like after holding a dead fish in the HOT sun all day. (and it doesn't seem too appetizing to buy)

We have been watching a little television here in our apartment in the evenings – it's the first place we've had a TV.  It's difficult to tell whether the Arabic shows are taking place in the present or the past. The scenes, the houses, the medinas, the clothing, they haven't changed in forever.  We have to wait until something like a car shows up in a scene to determine the timeframe.

The area around here is full of cork forests, harvested for wine bottle corks and other uses.  The bark is stripped off of the bottom part of the tree, but it grows back in about 10 years. It's beautiful, rolling countryside with lots and lots of sheep and goat herds.  The weather is a bit cooler than the south. Hurray. Have you ever seen a cork tree? 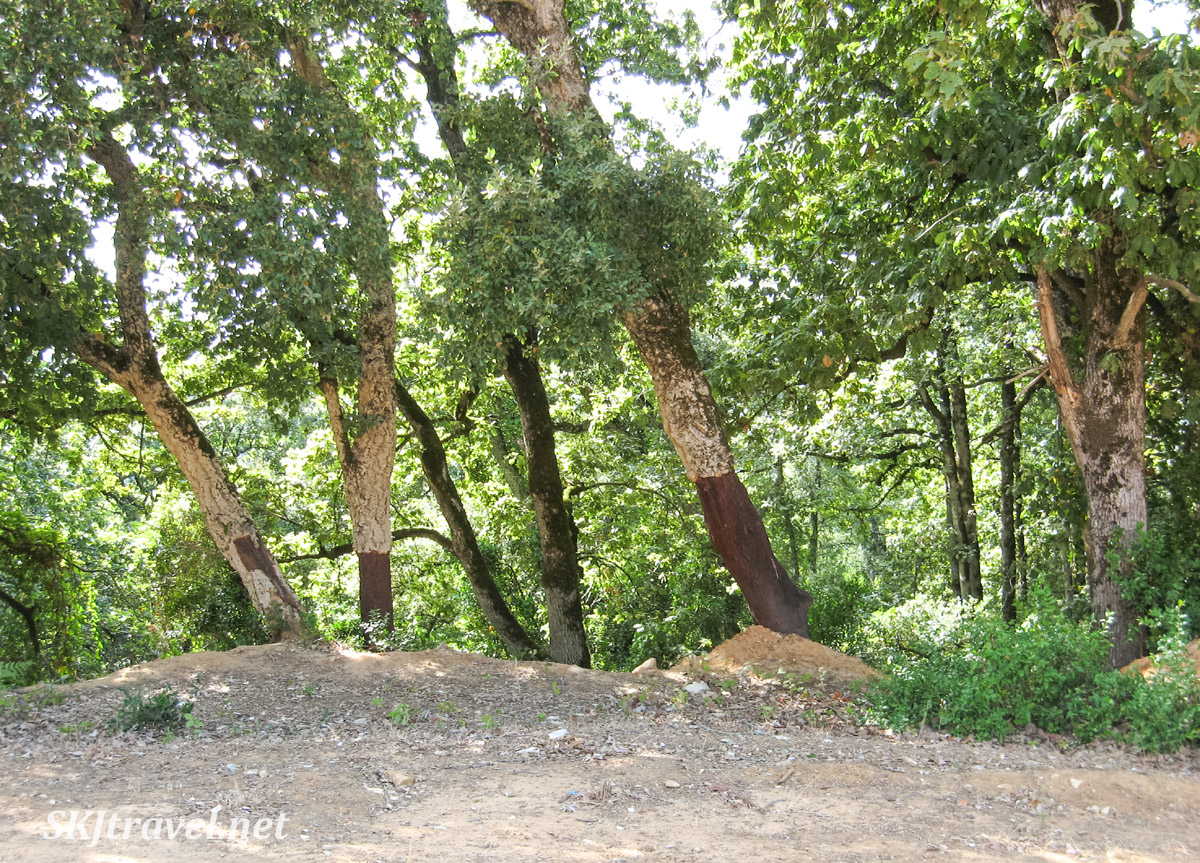 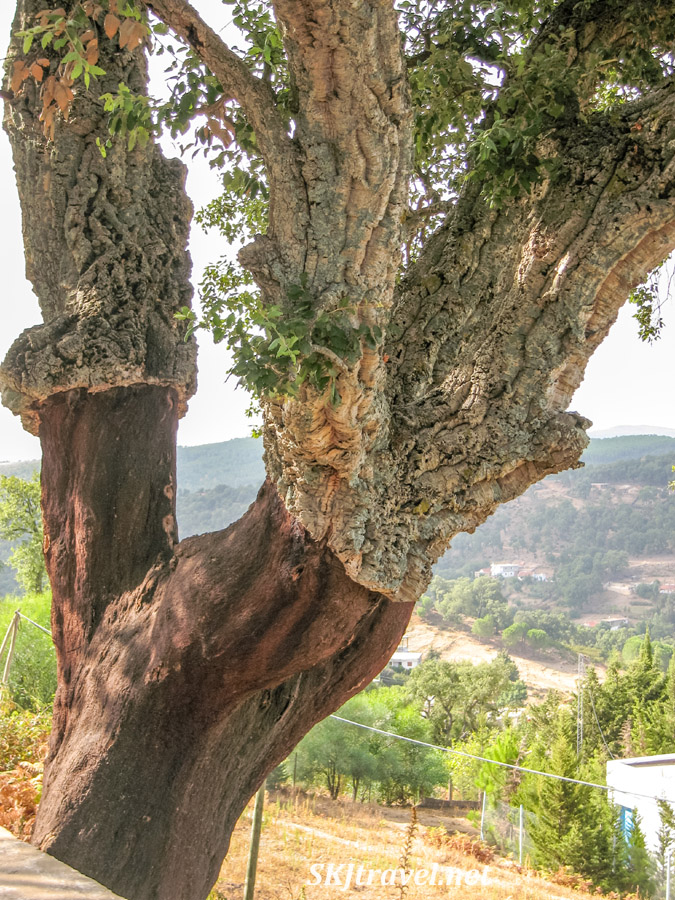 Too bad the liquor stores were closed and we couldn't taste any wine capped with local cork!