The Bridges are Washed Out! Exploring Cap Bon and Punic Ruins in Tunisia

But we have a trusty pickup truck!  We call her our Camel Truck.  So a lack of bridges does not thwart us! Well, OK, it did, but not without a fight.  We spent our last two days driving around the Cap Bon peninsula – the little "thumb" of Tunisia that sticks out into the Mediterranean.  We came to a spot in the road that looked as though it had been purposefully blocked, yet there were numerous tire tracks circumventing the roadblock.  We wondered what the deal was, and Erik joked that maybe the bridge was washed out, and we laughed about some cartoon scenarios we could find ourselves in, driving off the road into a river.

We drove on, and it turned out that a little bridge was in fact washed out.  And in fact, we made a bit of a comical scene when Erik decided to try to ford the river anyway, and we churned up heaps of thick, black mud all over our car – it even came inside to the dashboard through the open window. Perhaps that was the closest we came to being truly stuck during our driving adventures.  But we managed to back our way out of it.

Erik wanted to re-strategize and try again, but I just wasn't up for being a sport on this one, seeing as we needed to catch a plane the next day and I didn't want to have to abandon the truck in a mud bog.  As we started to drive away back to the main road to find an alternate route, a guy came riding up on his donkey and pointed to the main road.  We couldn't understand what he said, he was speaking Arabic, so he waved his arm for us to follow him, and he started galloping his donkey down the road in front of us.  It was sweet of him to lead the way, but since we already knew where to go and donkeys just don't gallop at all quickly, we passed him with a wave and went on our way. I feel he might have been slightly disappointed that he and his noble steed were left behind in the dust.  But we had places to go.  We ended up getting a car wash in the next town because the side mirror and driver's window were literally blacked-out with mud. 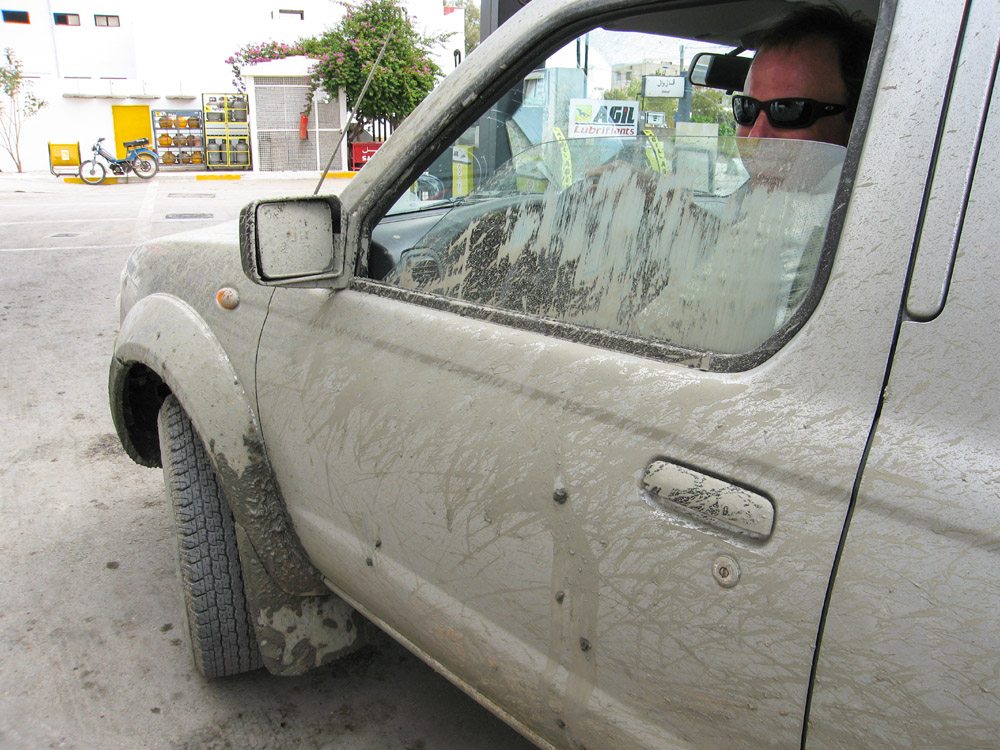 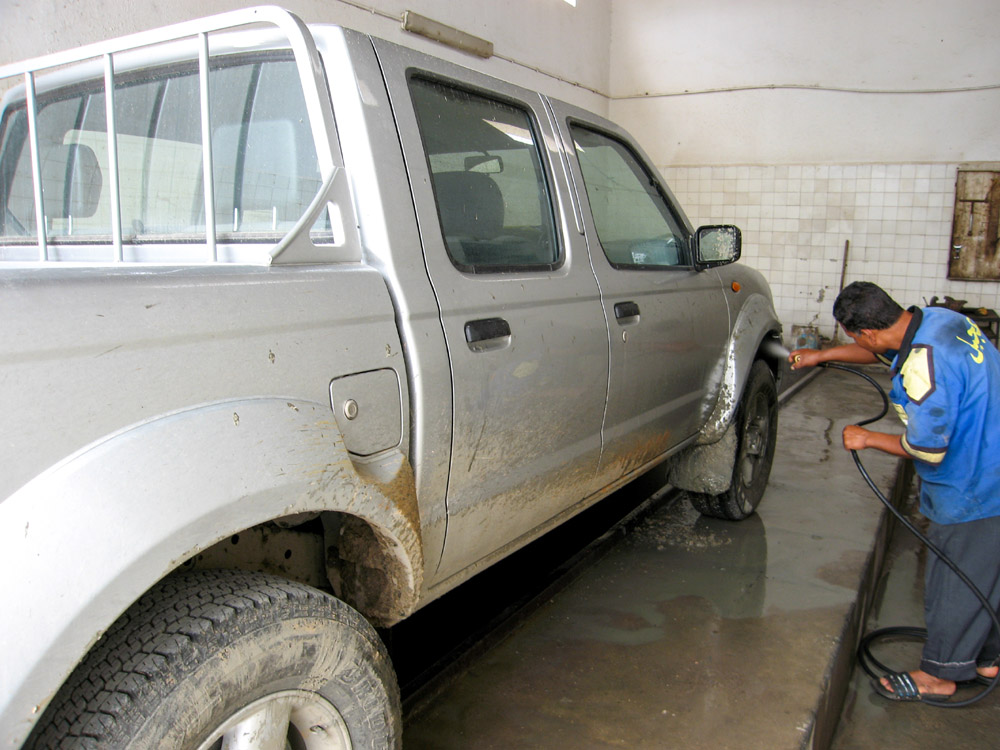 Later that day we were driving along a road hewn into the cliffs above the Mediterranean and came to a similar roadblock. But this one meant business.  There were about 5 berms one after the other blocking the road.  We got out and walked through them, to round a corner and find a huge stretch of highway lying at the bottom of the cliffs.  Yikes.  The next day (our last) we drove around and around trying to find a site mentioned in the guidebook as an ancient quarry along the coast, used from the 5th century BC on, and known now as the "Roman caves."

When we finally found it (having driven past it several times...), the entire site was shut down because some of the caves had collapsed. Though we were disappointed, I have to imagine there was a real danger to being there, seeing as how at every other archaeological site, you are free to roam and wander and explore everything.  Gates, grates and fences are few and far between, and most of the time there's an easy – and well traveled – way around them. Several of the sites lie smack dab in the middle of ancestral sheep/goat grazing grounds and the animals  meander through the ruins with their shepherd tagging along behind or watching them balefully from the shade of a nearby tree.

We drove the entire perimeter of the Cap Bon peninsula, which is characterized by sheer cliffs towering over the rocky coastline of the beautiful blue and green colors of the Mediterranean. We spent Saturday night at a town called El-Haouaria on the very tippy tip of the peninsula.  We drove up to the highest peak at this tippy-tip where there is now a series of radio towers.  A guy there let us in the gates guarding the towers and showed us around – there are several WWII German-installed cannons there, and of course "commanding views" (a common phrase used in the guidebook, but indeed apt). 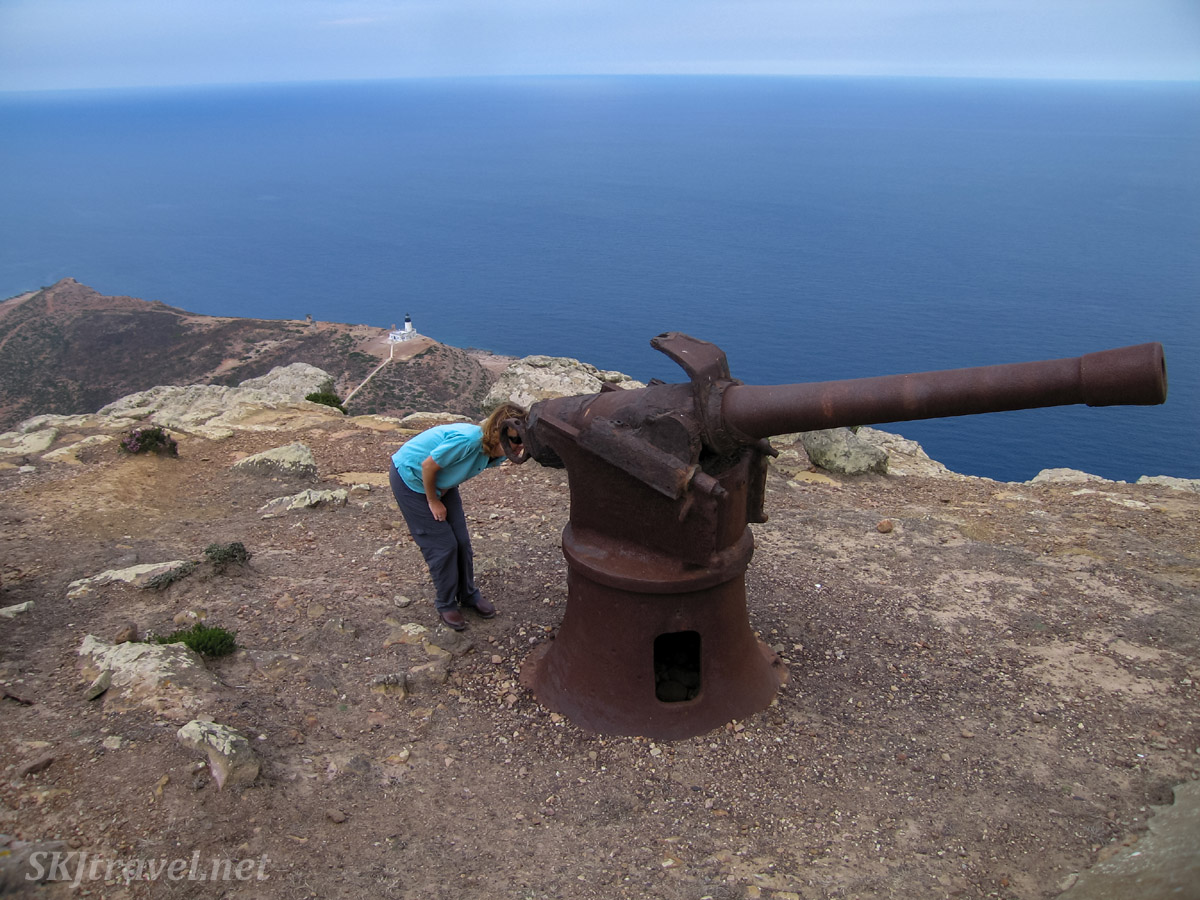 We also hiked to a couple different places on lower ridges to take in the views.  The first of these hikes we set out on just before sunset Saturday night, after we'd found a hotel and had dinner.  At sunset we stood on a cliff that looked over a wrecked ship in a little cove, and of course miles and miles of sea – unusually calm this night.  It was another long night of evening prayers coming through the town's mosque speakers.  There were two mosques broadcasting these, and they were not playing the same thing, so the different "songs" were layering over each other in strange, discordant ways.  The sound from the speakers had unimpeded access to us out on our cliff past the edge of town, and carried on past us out into the vastness of the sea.  It was a strange, surreal moment, standing there amid the prayers looking out over the rusting  shipwreck. 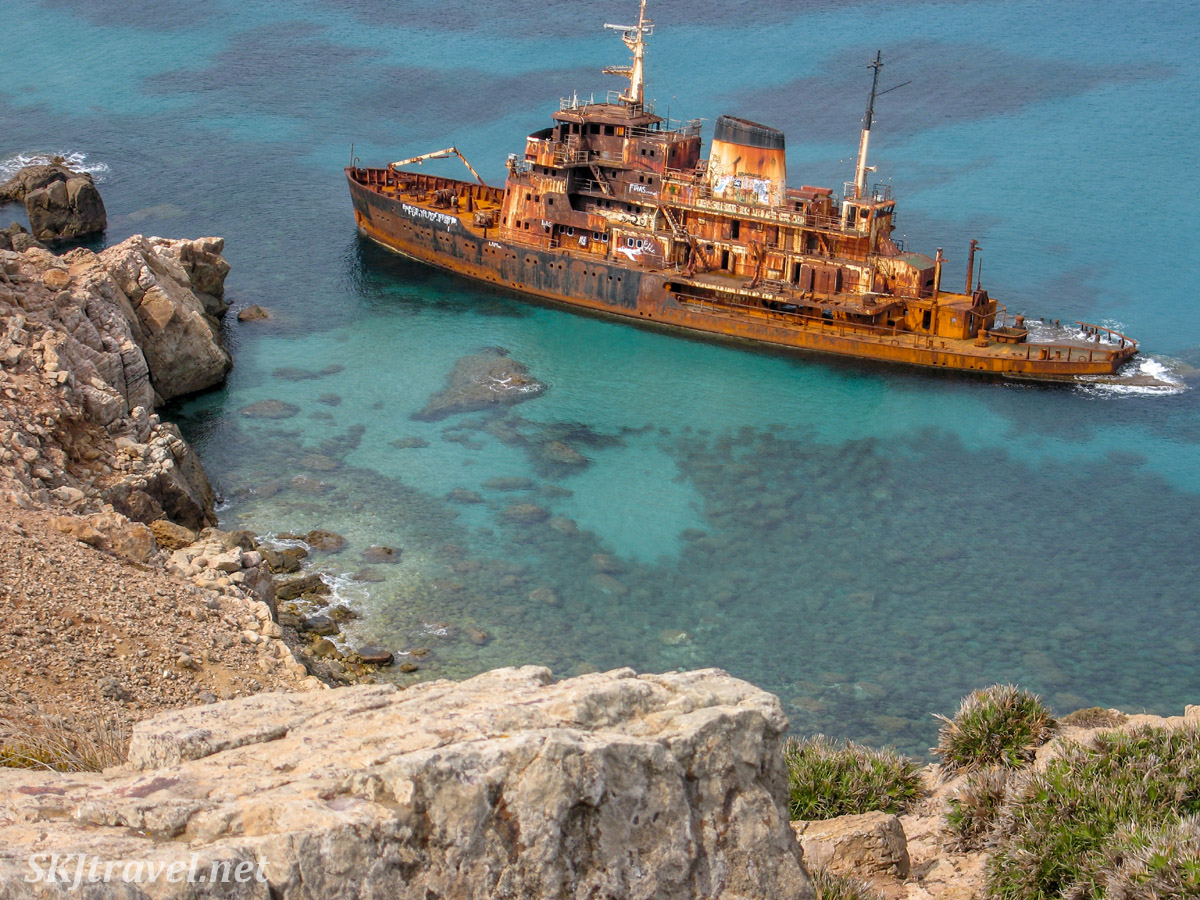 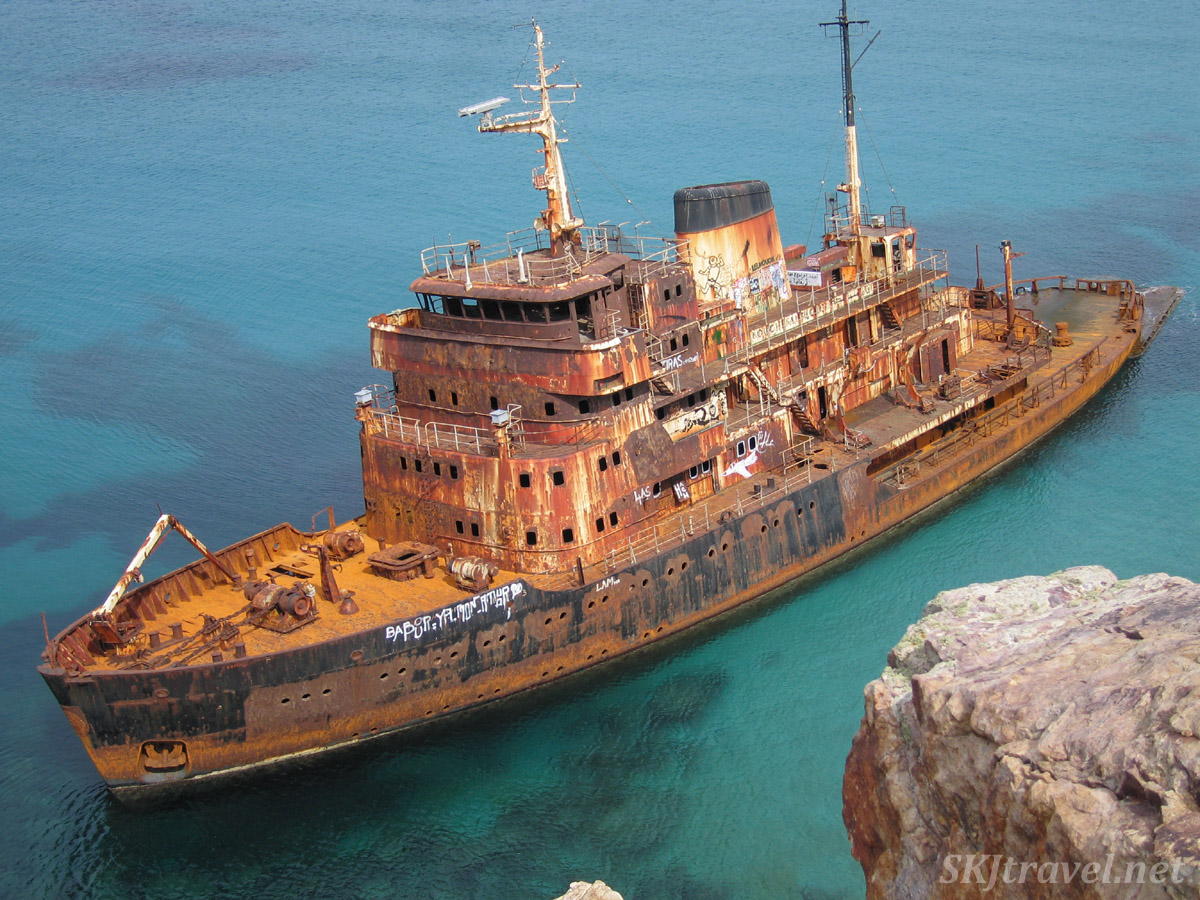 We found our way back home in the dark, which was only semi-dark owing to a 3-quarters moon.

The next morning, at 5:45 a.m. and again at 6:15 a.m., the prayers stabbed at us.  Our budget hotel didn't have air conditioning, so we slept with the windows open, and boy those mosque speakers are just as good as the loudest alarm clock.  I wouldn't have thought much about our accommodations there – pretty typical budget stuff for a country like Tunisia. But it did amuse me that the guidebook considered it the best place to stay in El-Haouaria ... but it just goes to show how everything is relative. The bed was a thinnish cushion on a slat of plywood  (actually not uncomfortable for me); of the 3 pillows, 2 were severely overstuffed throw-pillows like you put on sofas, and the other was a sheet of packing foam in a pillowcase; the bath towels were elongated hand-towels stolen from another hotel; and best of all, no hot water.  That was intended to be our last shower for 48 hours – I had had hopes of it being warm and enjoyable.  Oh well.  The proprietor was very nice and he had some adorable kitties who kept us company at breakfast.

We went to the ruins at an archaeological site called Kerkouane, which is a rarity in that the ancient city is a purely Punic (i.e. Carthaginian) site.  Most Punic cities razed by the Romans in the Punic Wars were later rebuilt by them (the Romans).  But this city was never rebuilt.  It was home to wealthy merchants -- nothing surprising, as the Carthaginians were a business and profit-oriented society as opposed to a warring society such as Rome who was always out conquering new territory -- situated directly on the northeast coast of Cap Bon. I thought it was quite picturesque in spite of its sparse remains. 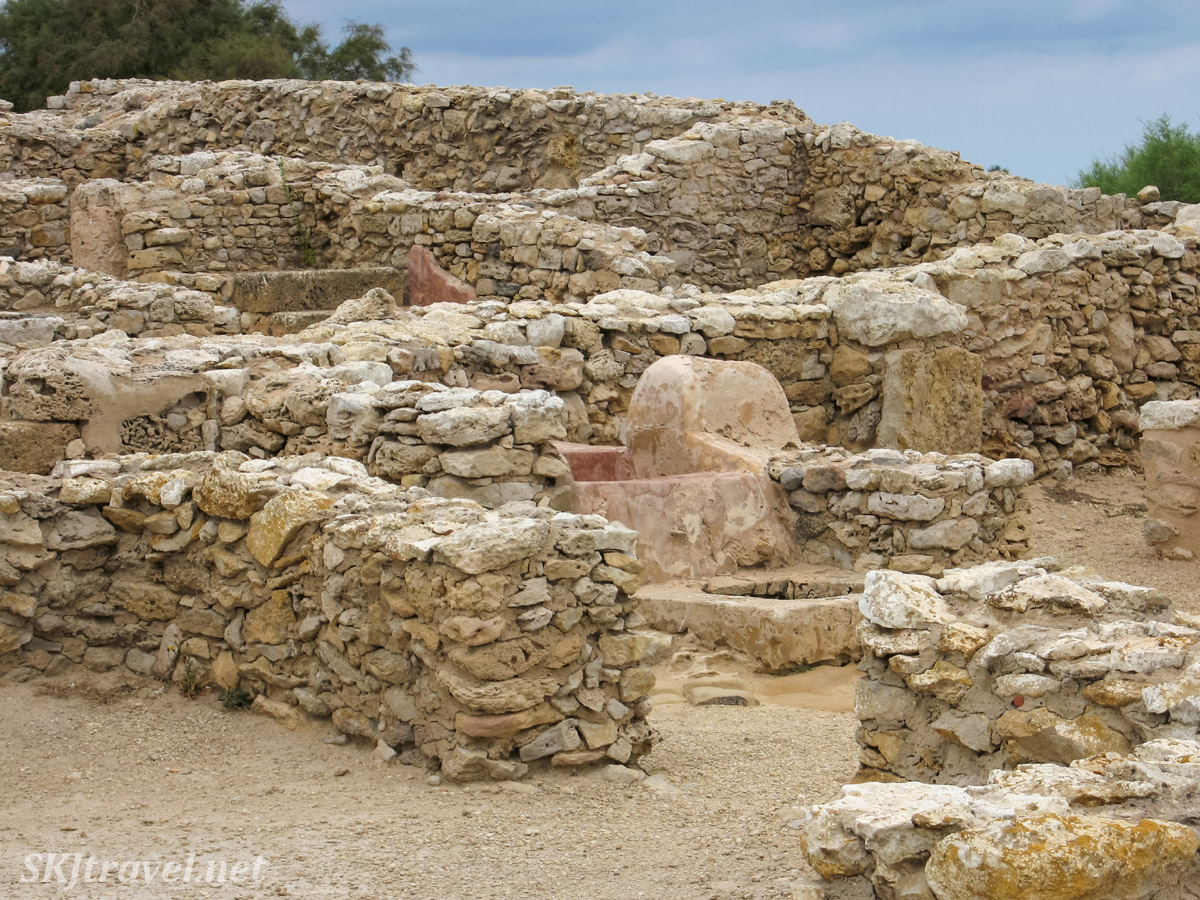 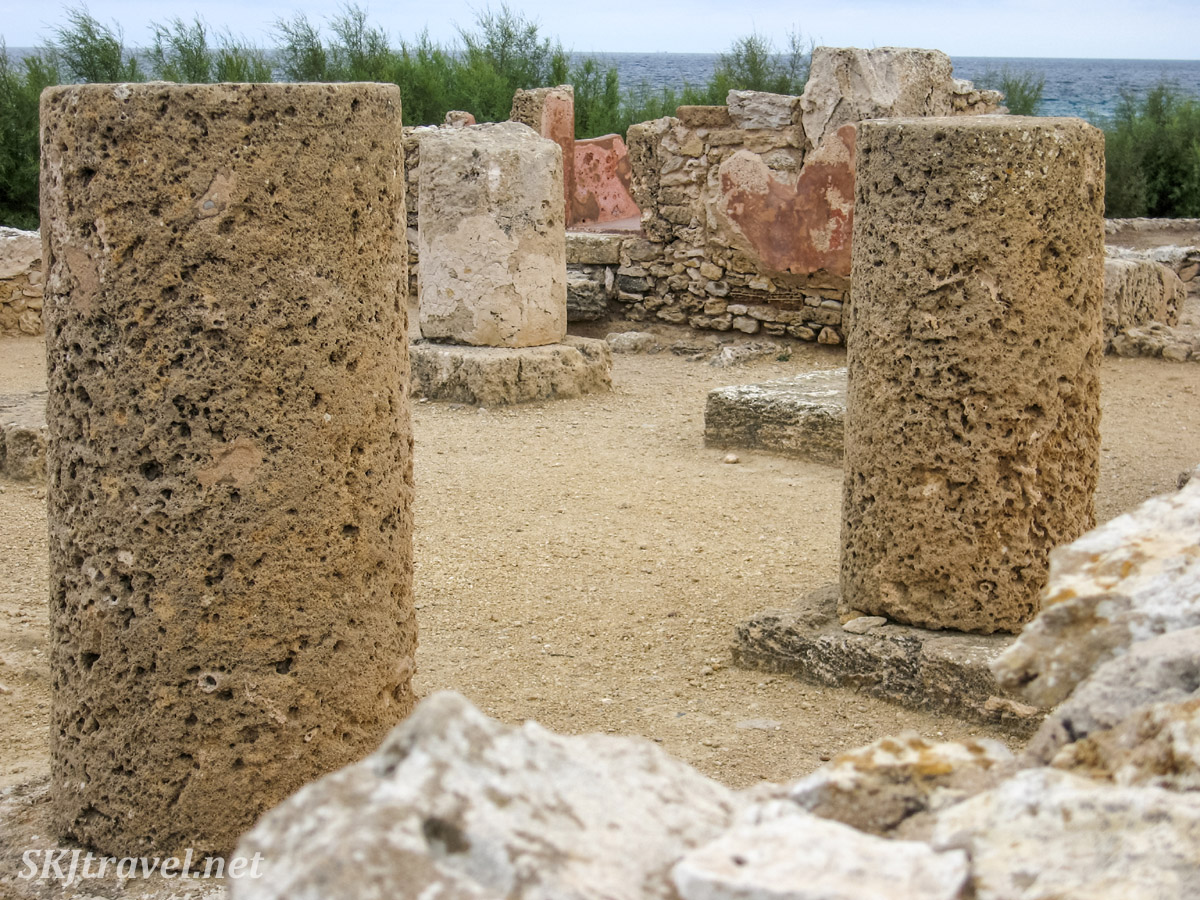 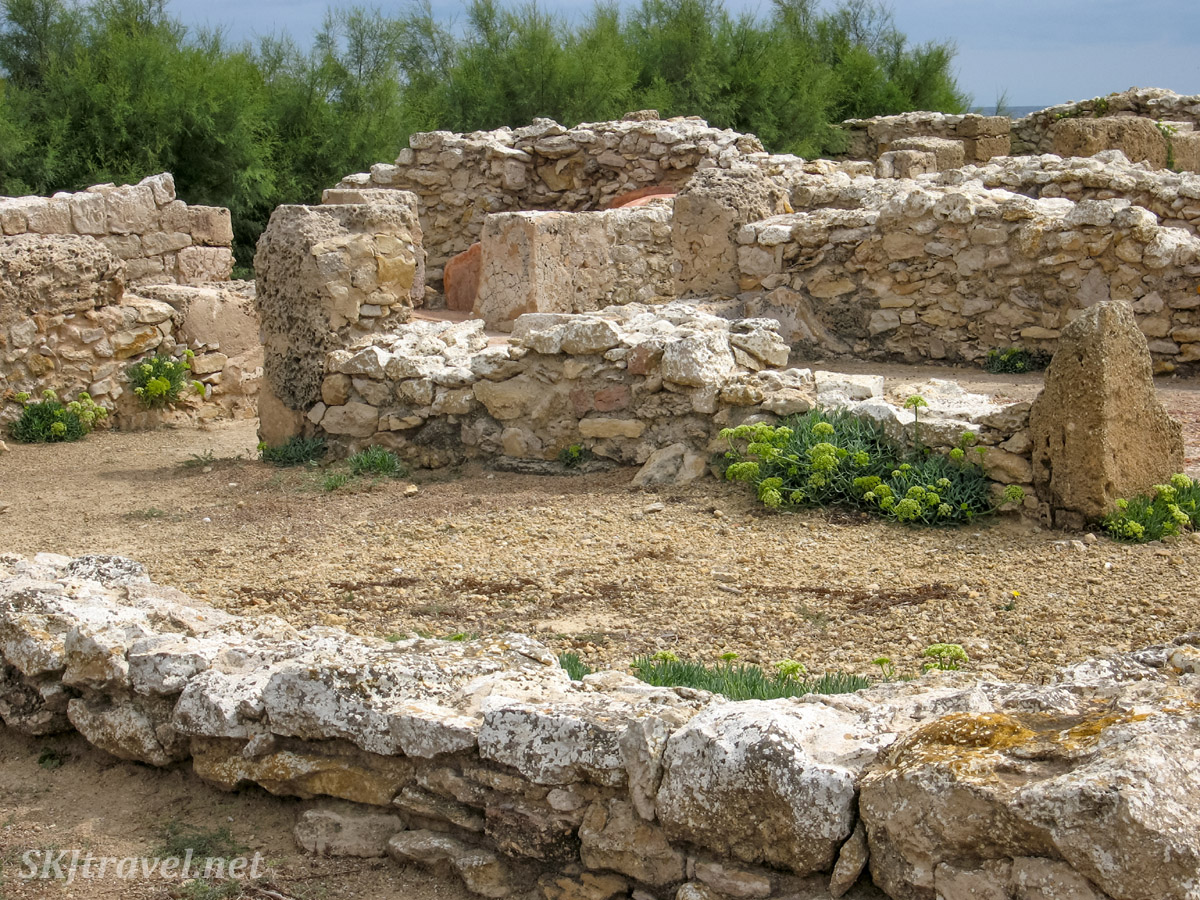 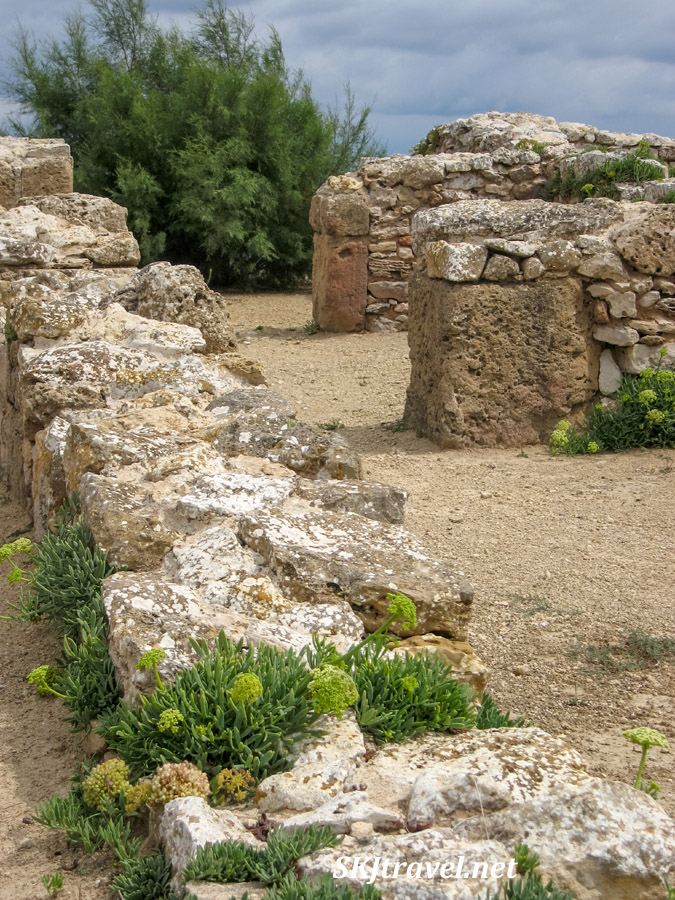 What was most interesting to me, was that the one thing to consistently survive in the ruined villas -- we saw this in Bulla Regia, too -- and to survive quite well, are the private bathtubs.  Many of them still have their smooth tiling (in Kerkouane this is random chips of red and white, no images like in Roman tile mosaics); the steps, the whole tub, the cistern to dip water from, and the drainage gutter are all well preserved, while nearly everything else is now heavily eroded and few walls are over waist high. 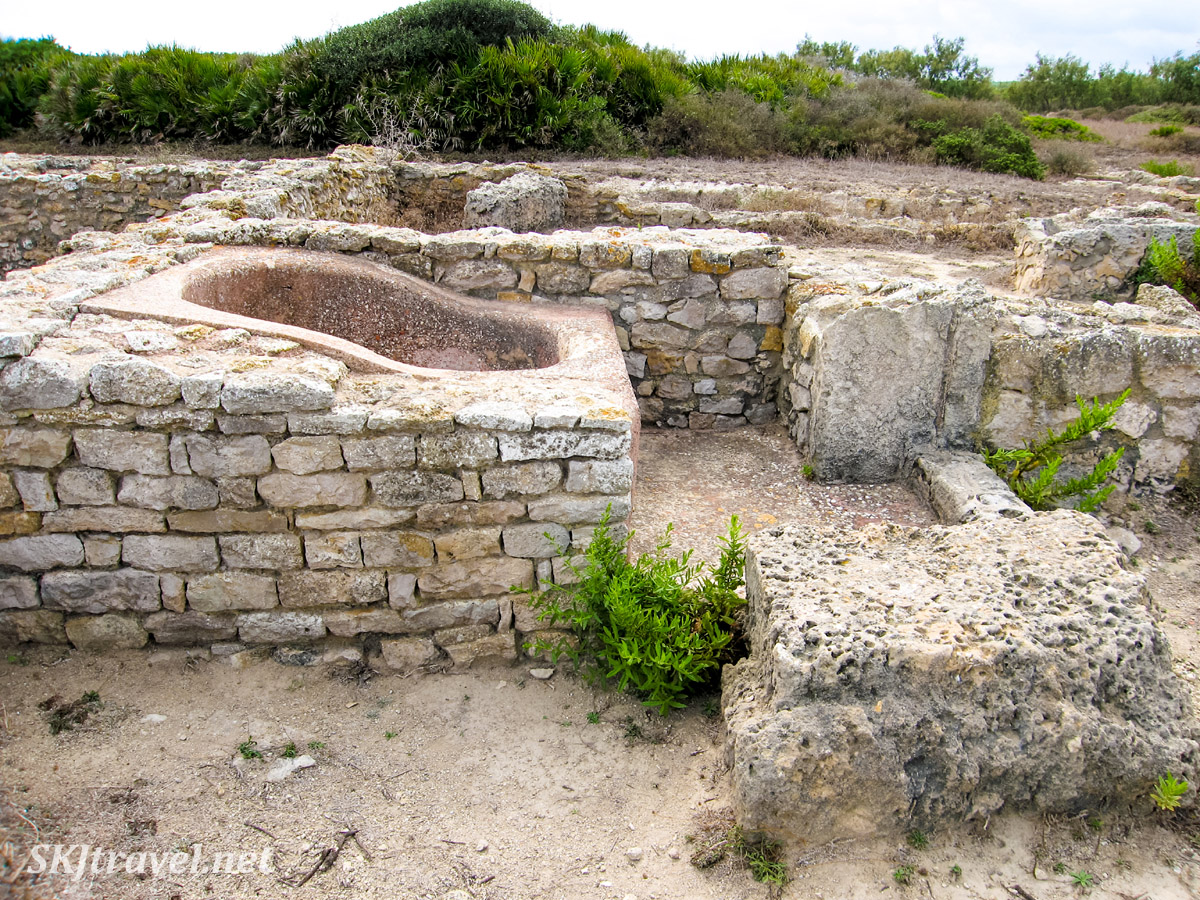 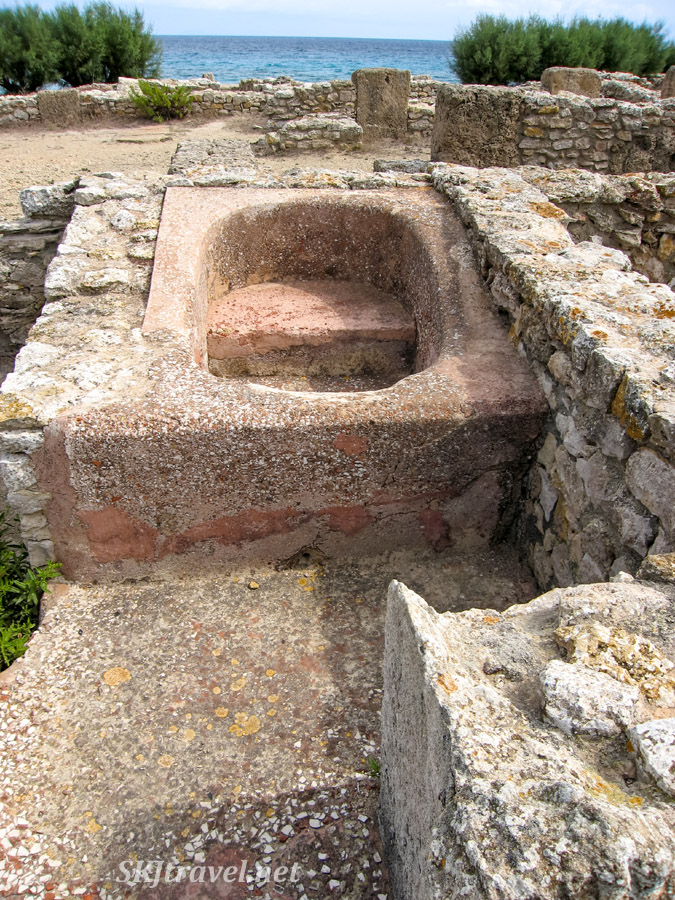 A work of pottery in the onsite archaeological museum. 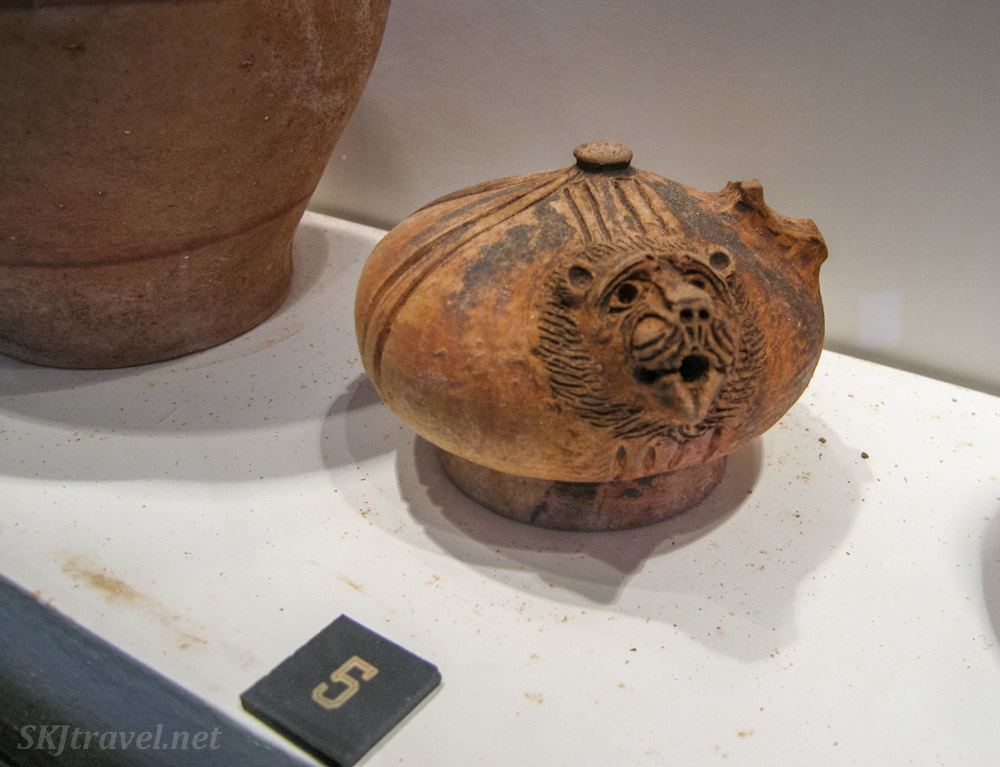 We found this adorable tiny tortoise wandering through the ruins. 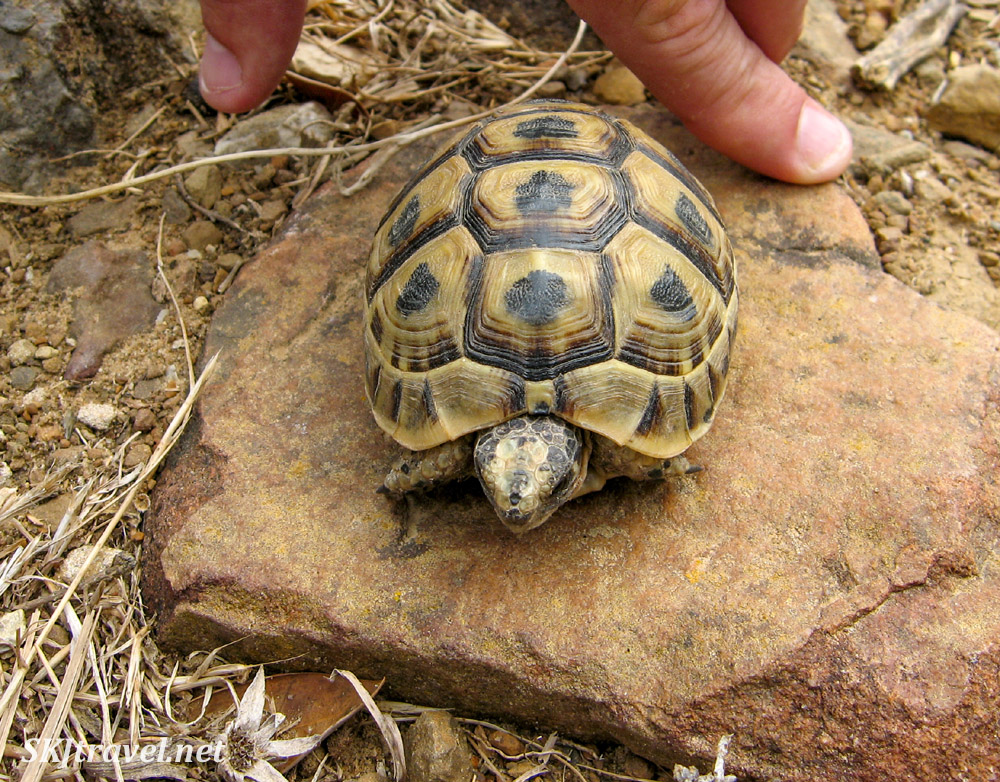 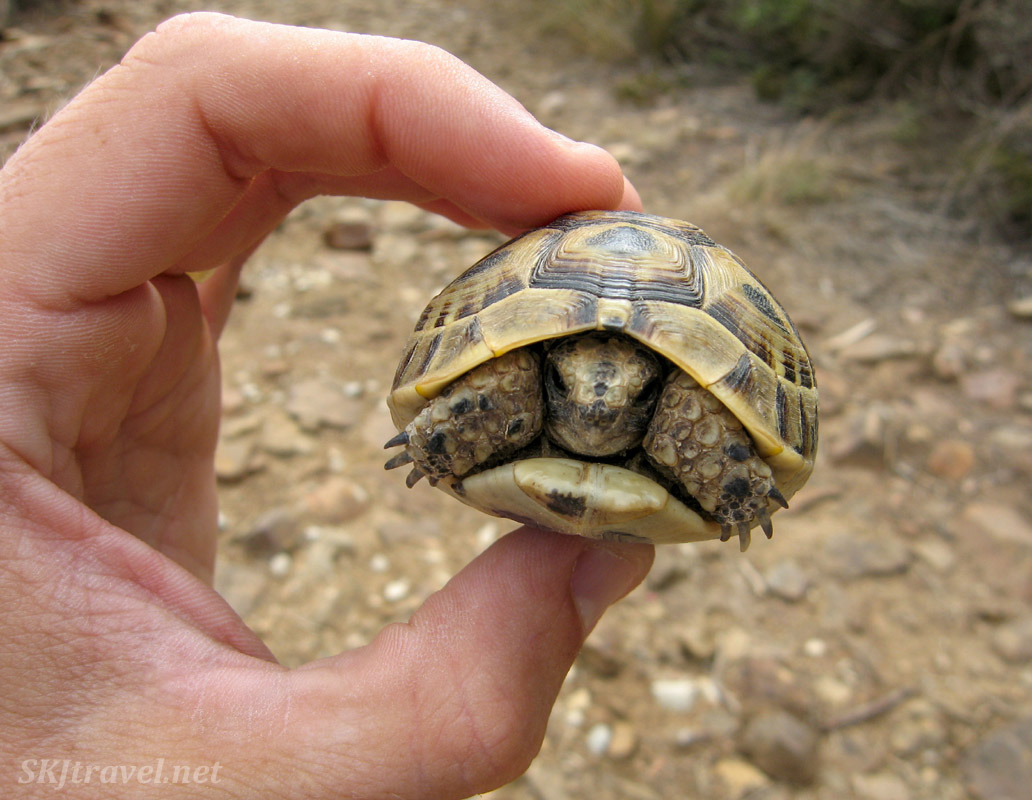 We also went to a large fort on the coast in a town called Kelibia, the views from which were quite astounding.  Not so much because there was anything particularly interesting to look at, mostly just flat, blue sea.  But because the view was so expansive (and 360-degree), you could see the curvature of the earth just like you were standing on the surface of a huge coin, looking around you.  I don't know that I've been in a place quite like that. 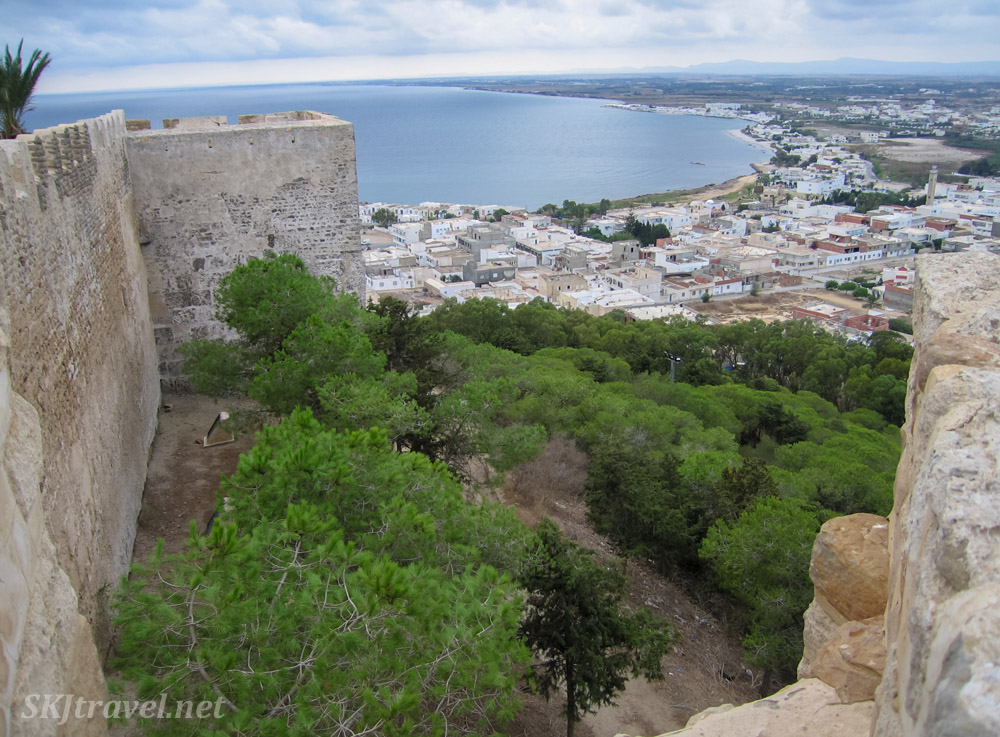 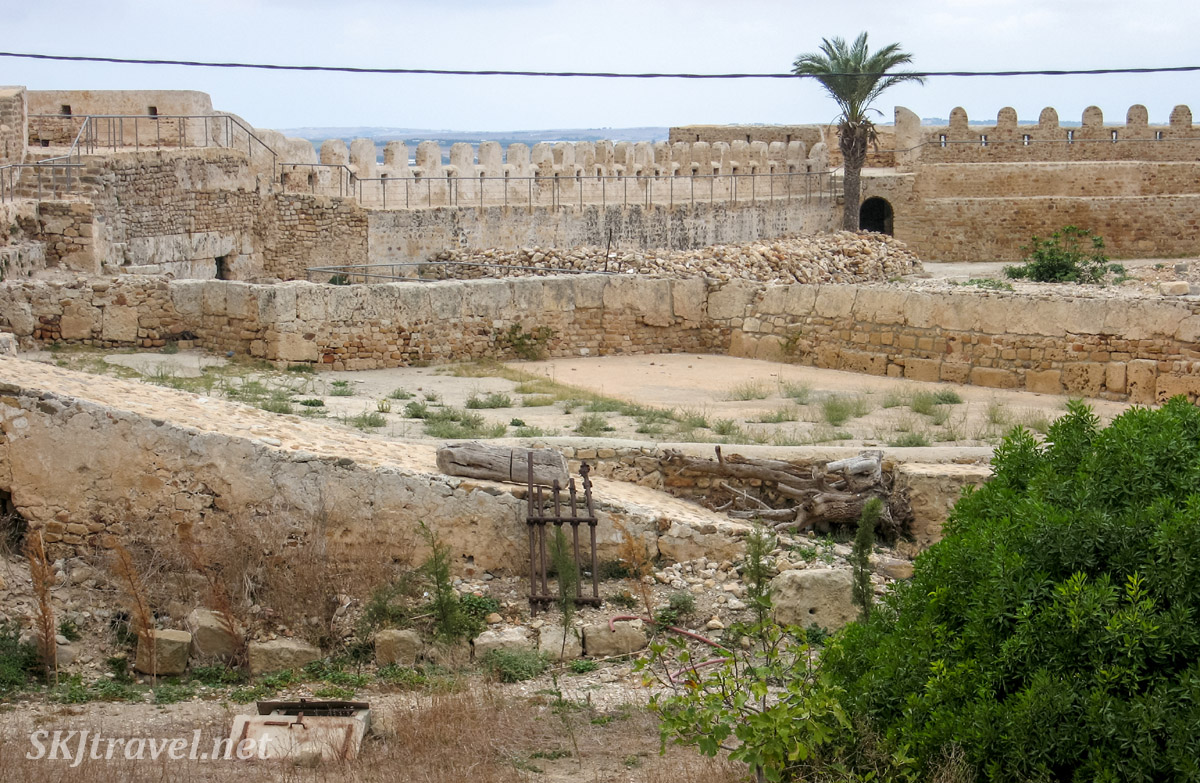 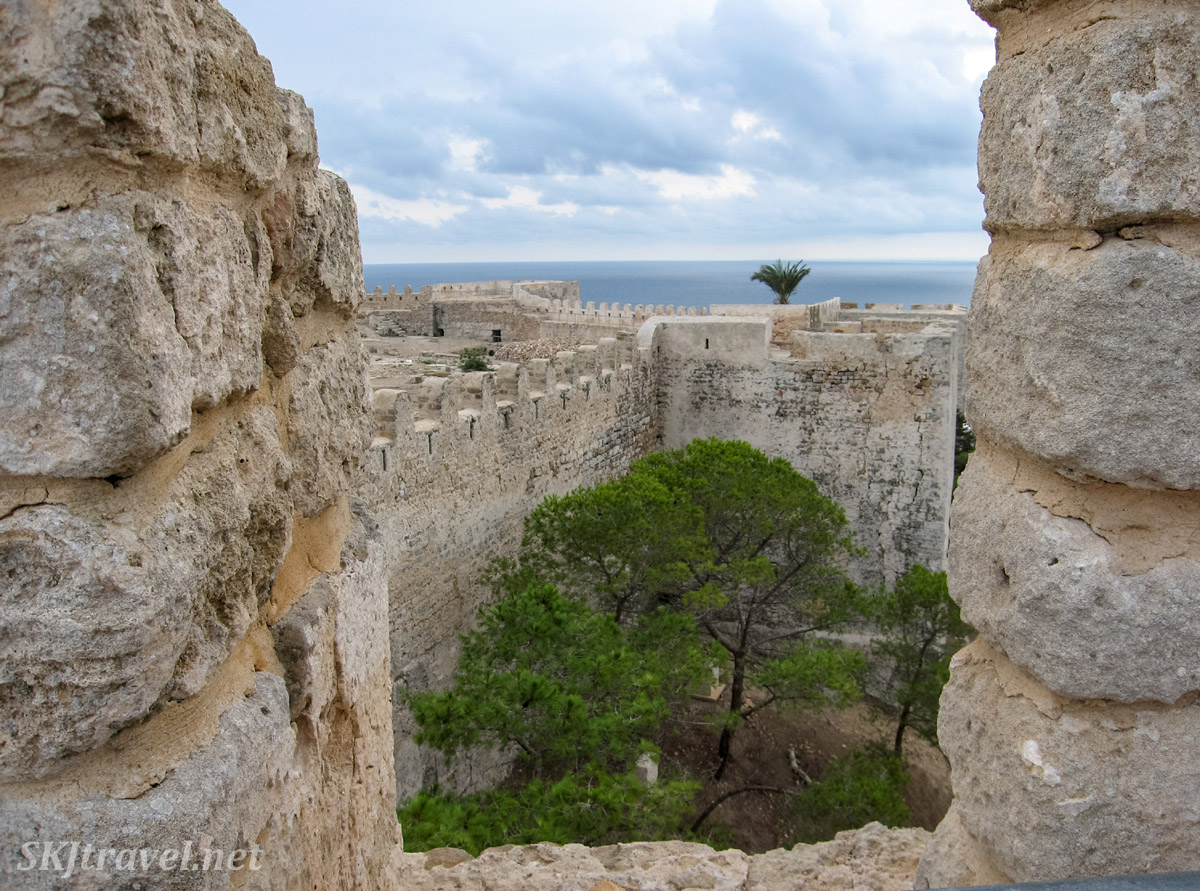 Much of the highway we've driven along, particularly on the way back to Tunis, is lined with the ruins of an ancient Roman aqueduct. You can tell that parts of it have been rebuilt over the centuries and other parts were very, very old and decayed. But it felt rather grand, almost odd, to be so casually driving beside the remains of such legendary engineering and historic importance. But this is so much of Tunisia ... phenomenal ancient ruins strewn everywhere with the casualness that little late-19th century/early 20th century mining cabins lie in ruins in the area around my home in Colorado. But these here are architectural masterpieces centuries and millennia old. Just amazing to me. 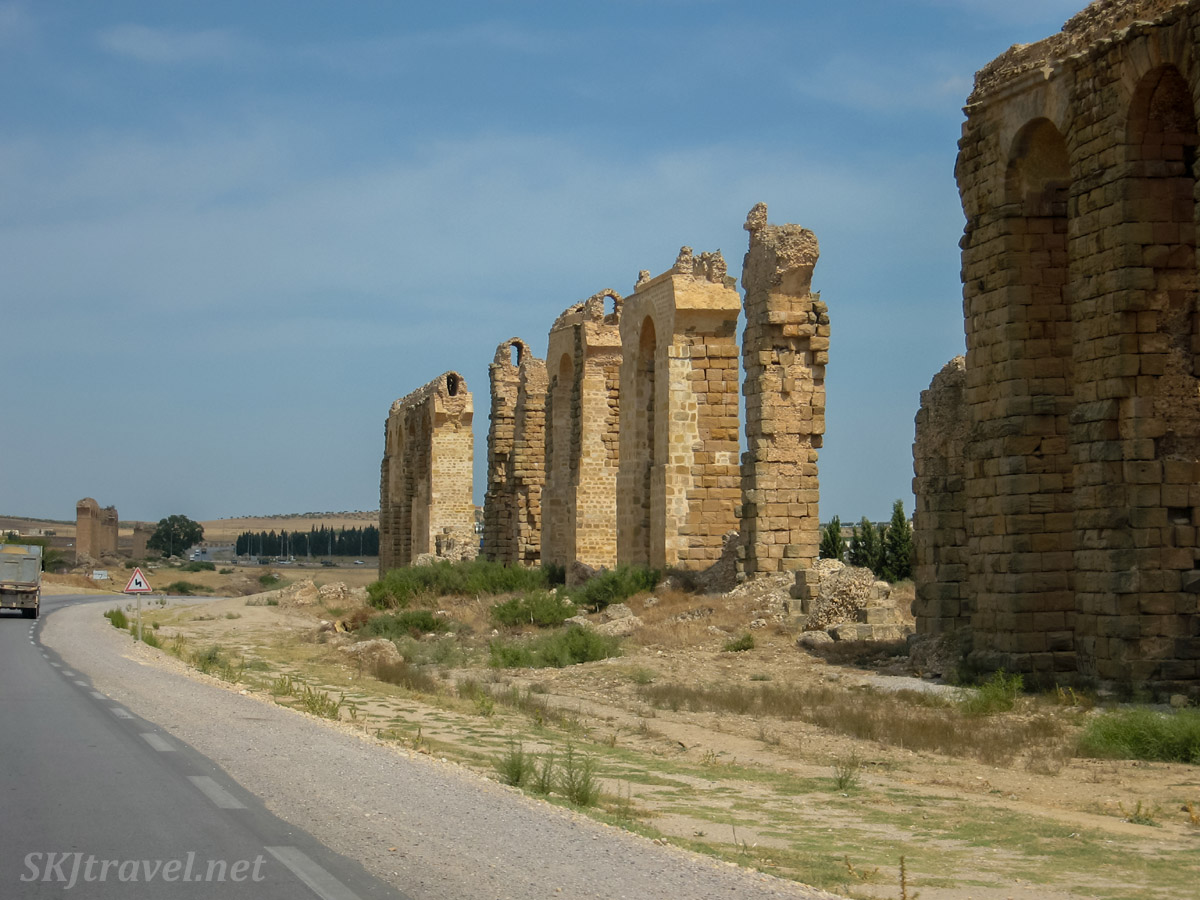 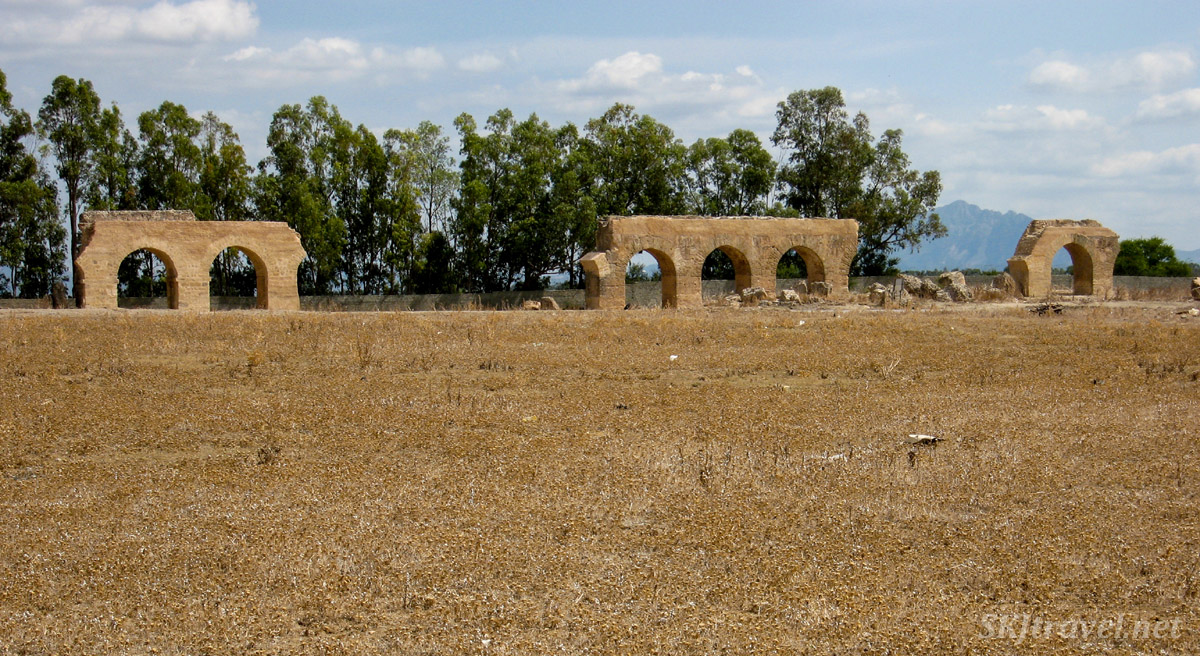 Here are a few other random street (driving) shots, I really haven't included any so far, I don't think. The first one is just a nice place we stopped for lunch one day (harissa and bread, of course, somewhere people couldn't see us since it's not really cool to be eating in public the middle of the day during Ramadan). 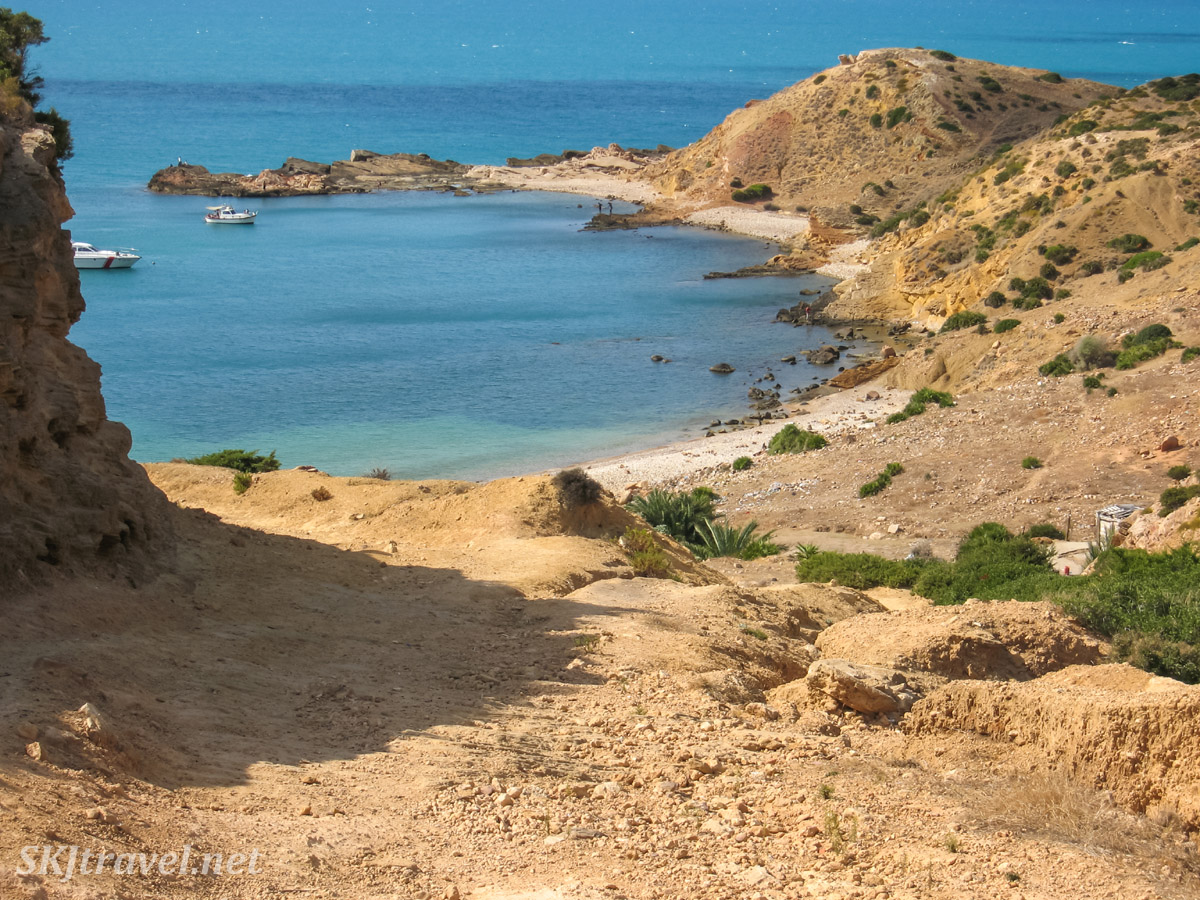 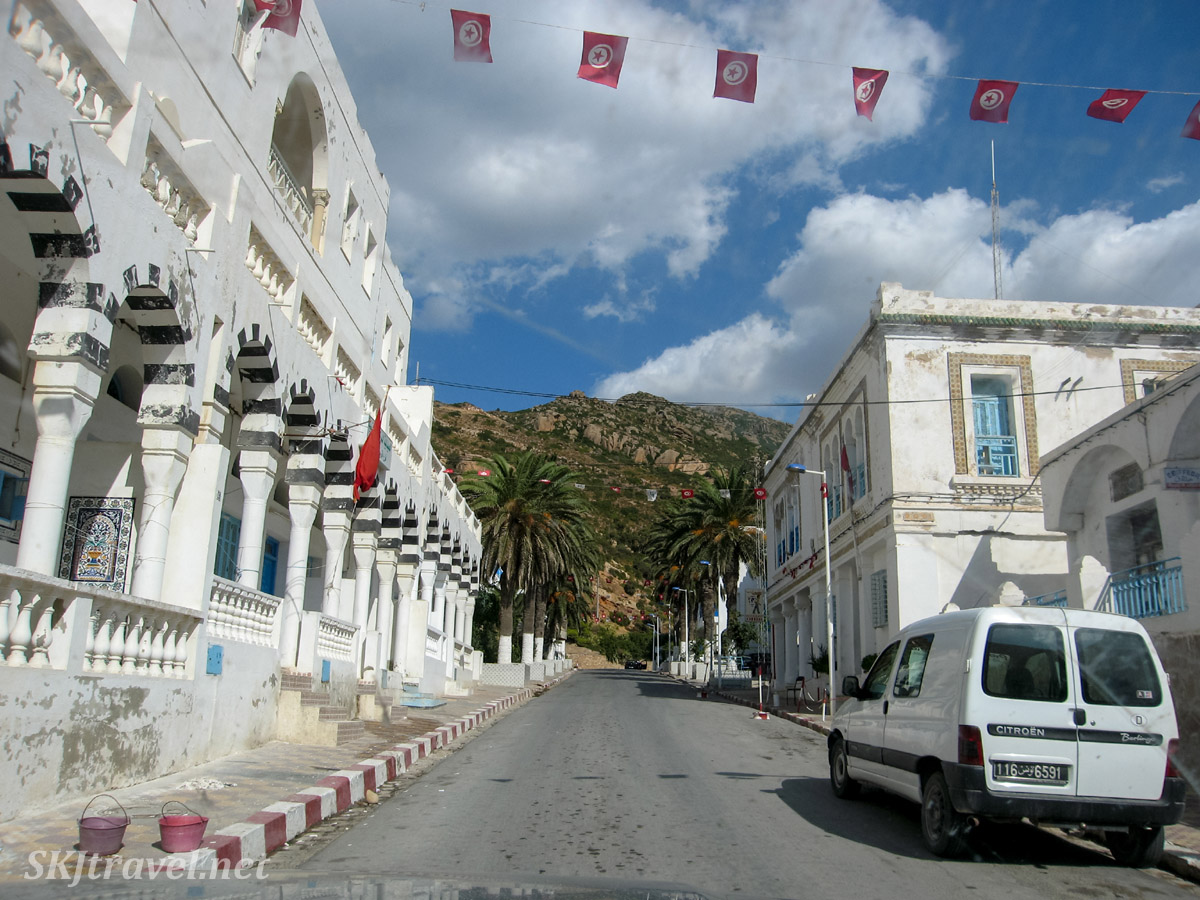 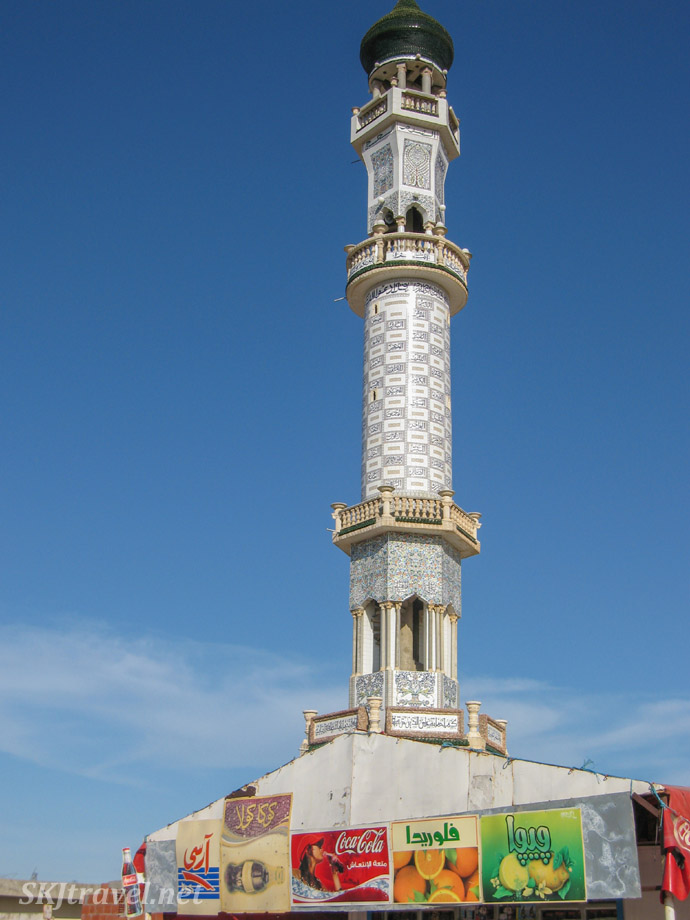 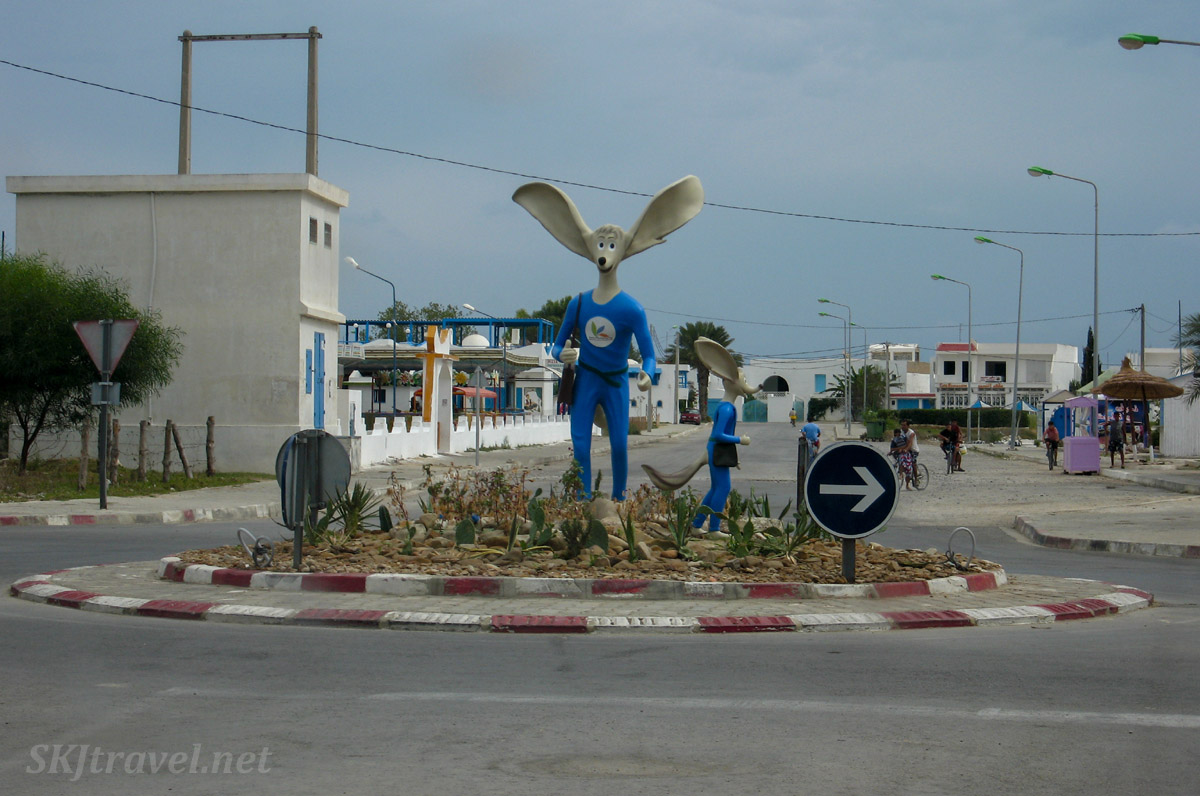 So we drove back to Tunis and spent the evening back in the medina.  A very different place now at night from our first visit, as it’s now Ramadan. Everyone was eating with their families after sunset as we roamed around and got lost. Very rewarding, actually, to see the doors closed on the vending stalls – many of them are quite pretty. We noticed many things we hadn't before, things which there was no way we COULD have noticed before with all the throngs of people and heaps of stuff for sale.  This night the maze of alleys and souks was abandoned.  Our flight out of Tunis was at 3:30 a.m., so we never got to go to bed Sunday night.  It took four separate flights to get us home late Monday night – rather grueling. 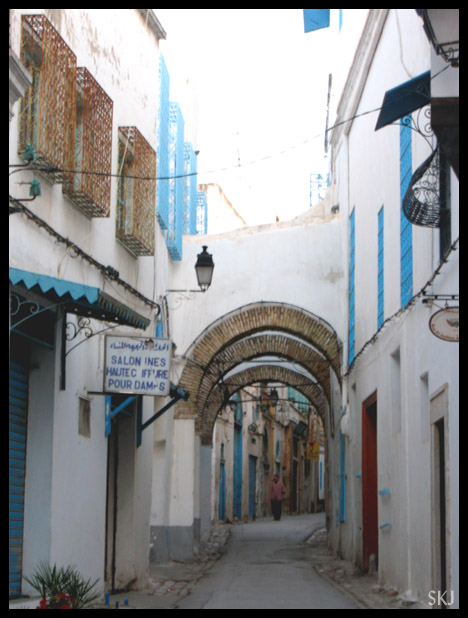 I can't believe it, but I apparently actually started to get somewhat used to the computer keyboards in Tunisia because now I find myself at home typing several characters incorrectly, reaching for their location on the Arabic keyboard.  I can imagine my dispatches are rife with strange typos, and probably even strange, nonsensical sentences.  If we give a photo presentation, we can clarify and expand on our tales. So we're home safe and sound; our new kitty whom we'd been calling "little  miss" when we left is now definitely "medium miss." The kitties have eaten well in our absence.