UFOs! Or maybe that's just a monastery on a cliff.

hey have here in China a television station on which they teach English lessons.  This morning we learned some very useful phrases:  (1) "Where were you this morning when the UFO landed?"  (2) "I was in the barber's chair."  What's odd is that the second phrase could actually be employed by us, as Erik and I both were in a barber's chair yesterday. How random.

My village trip is over. Sorry, there were no other opportunities to write while there. Erik has now arrived and we are beginning our adventures together. We are now in a hotel in Datong. Last time I wrote, from Jiaxian City, I had a bunch of things planned out to write, but when I got there I couldn't think properly because I was the only Westerner who had ever been in that internet cafe, and people were gathering around me looking over my shoulder as I was typing, and sitting down next to me to watch me type. Even though I'm sure none of them could read my typing, it distracted me a lot.

So anyway, after we met at the airport, we went to our hostel, but it was an adventure since our taxi driver had no clue where it was.  But we made it eventually, and the next day bought our train ticket and then sprinted through the southern part of the Temple of Heaven, with just enough time to see the Hall of Prayer for Good Harvests, which is the centerpiece of the park and which was closed last year for renovation.  So I was happy to get to see it this year, now freshly painted in vibrant colors (some would say too vibrant). 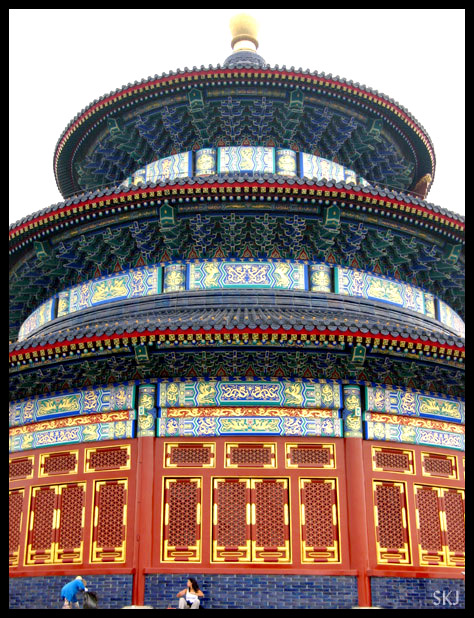 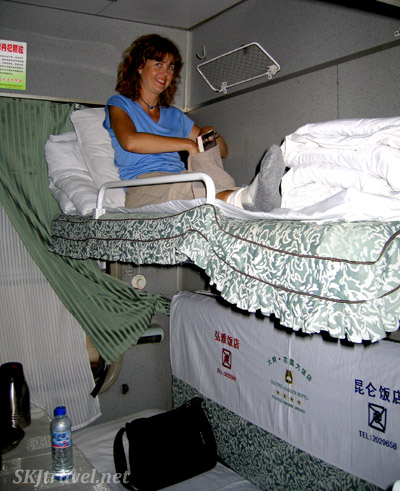 at about 9:00pm and checked into our hotel, which I had booked ahead of time online before I left for China.  The assistant manager seems to be incredibly impressed by the fact that we had a reservation this way.  When we showed our reservation voucher to him he was gleeful and showed it to the other clerks, then personally escorted us to our room.  We asked him where we could get dinner quickly and he said to come to the hotel’s restaurant, it was closing soon.  So he came with us to the restaurant, personally took our order and showed us the beer selection.

The next morning we went to the floor that the elevator says has a barber shop because Erik needed a haircut. But the barber wasn't available or something.  Our manager friend upon hearing this, went up there, had words, came back down and subsequently arranged our entire day for us with a private taxi to (1) go to a barber (where we had to wait 1/2 hour for the "master barber" to show up for the Westerners), (2) go to the ATM that takes foreign credit cards, (3) go the Hanging Monastery, and (4) go to the Yungang Grottoes. Then the assistant manager hopped into the taxi with us and spent the day with us!  At the tourist sites he took our money to buy our tickets for us like a private guide.  Funny.  He continues to watch over us like a mother hen at everything we do.  Right now, in fact, he's here checking on us in the hotel’s internet room. There are other westerners here at the hotel, and it's only us he loves; I really think it's because of the reservation that he was so impressed with. Perhaps registering the hotel online was his idea?

The Hanging Monastery is great fun -- a little monastery literally clinging to a steep cliff.  You can climb around all through it on narrow  walkways that are supported by a few thin timber beams that extend down into the rock in the valley below.  There are fire extinguishers everywhere, as it’s a wooden temple and if the floor burned from under you, you’d plunge a terrifyingly long way into the valley! I thought how lovely and peaceful it would be to have been a monk here when it was an active temple ... to stand at the height of flying birds and look out over the valley. There would be something special about being in the middle of the rock face, not perched on top, not nestled below, but uniquely placed in the center, anchored tenuously to the earth and relying on her more than a typical temple would for support. The precarious location was reputedly selected on Taoist principles of silence, being up above the noises of the world below. But this is modern-day China ... good luck on the silence thing. Additionally, protection from various weather elements was assumed by the architects. I dunno ... I personally suspect they just thought it would look pretty damn cool. 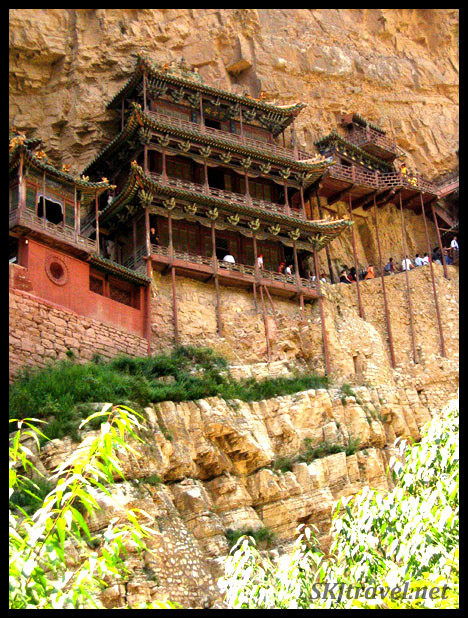 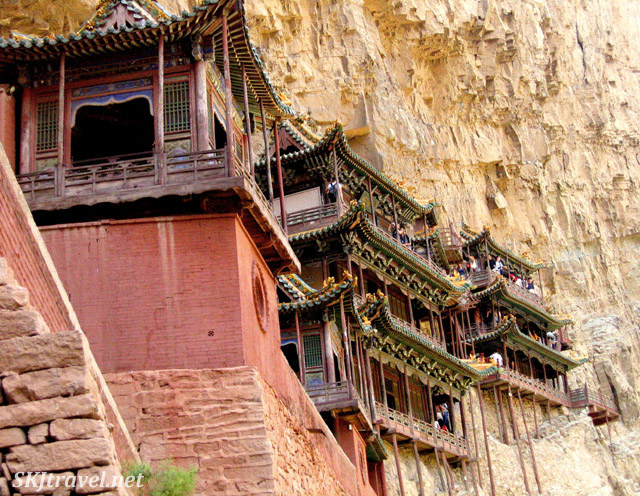 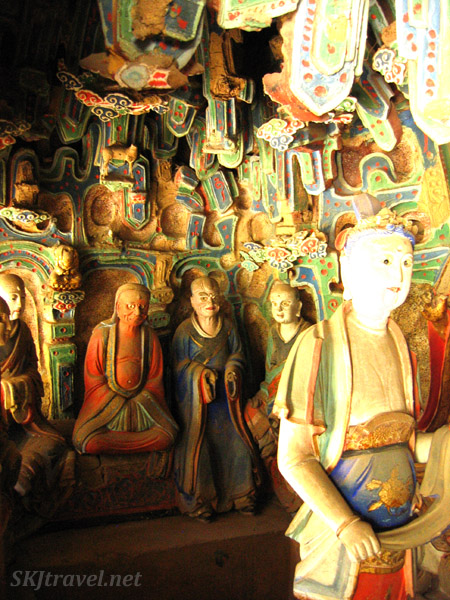 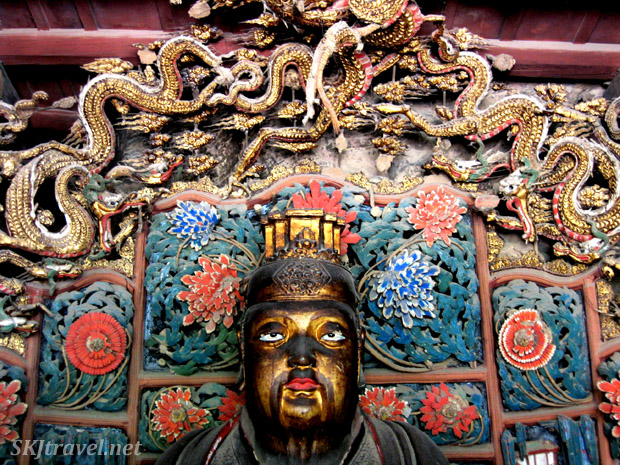 Though it's primarily classified as a Buddhist temple, as with many temples we saw in China, it combines elements from several religions, including Taoism and Confucianism. It was pretty fun walking along the corridors supported by the wooden poles fastened into the cliff side. It seemed almost adventurous though it was built as a haven for contemplation. I was unduly fascinated with the way the buildings melded right into the rock. It's like they were just stapled on. It's hard to believe this has been standing since 491 AD. 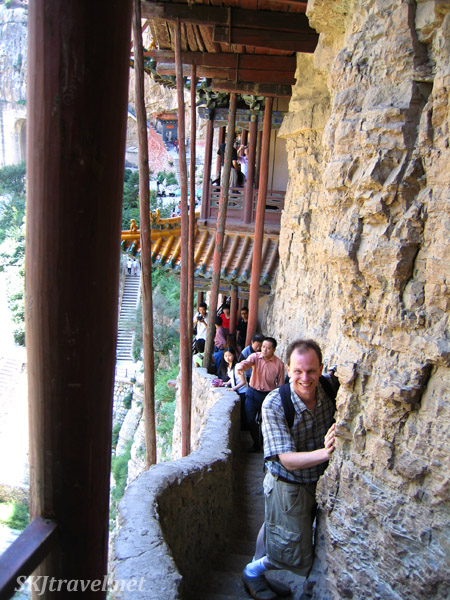 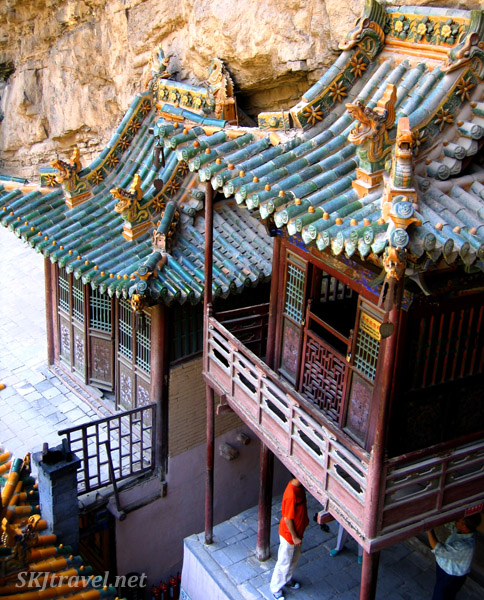 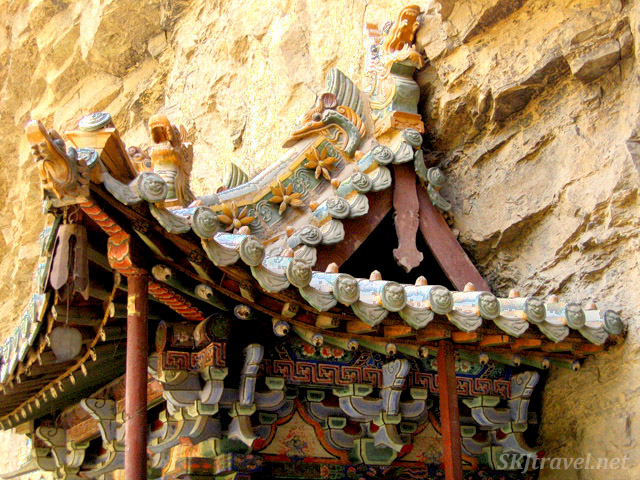 We moved on to the Yungang Grottoes, which I thought were spectacular.  They are the main reason I wanted to come to Datong.  And I wasn't disappointed. Most of them were carved in a span of 60 years during the late 400s/early 500s AD. I don't know if 60 years sounds like a lot or a little to you, but once you see the place, it seems an impressively small number of years for such an ambitious work of art. According to UNESCO (this is designed a World Heritage site) there are 252 caves and about 51,000 statues. 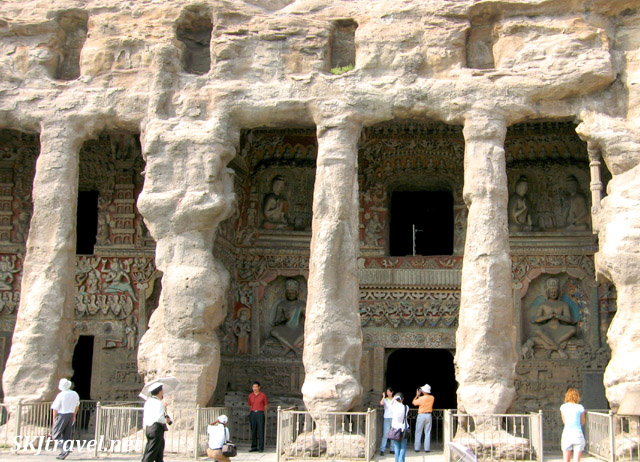 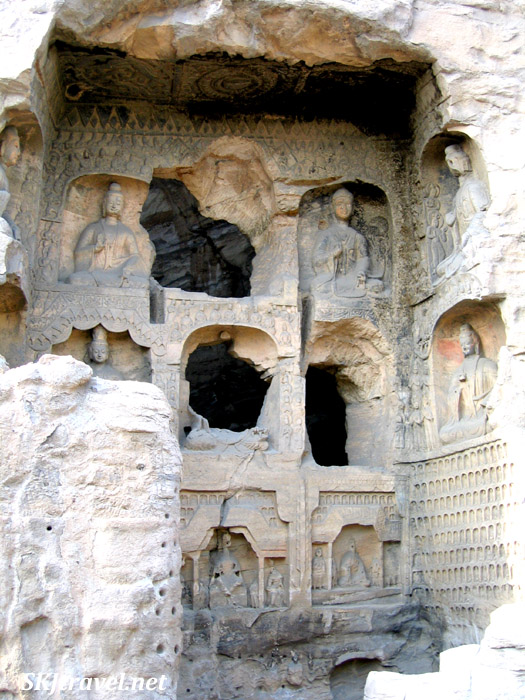 The grottoes carved into the stone cliff side present varying sizes of statues in them from small – a few inches high – to so gargantuan you have to crane your neck up to glimpse the top. Entire walls are carved with rows and rows of tiny figures surrounding the free-standing statues. What a life, carving and chiseling in this stone! I think it must have been like a form of meditation, creating so many niches and statues, especially the rows of little ones, thousands and thousands. 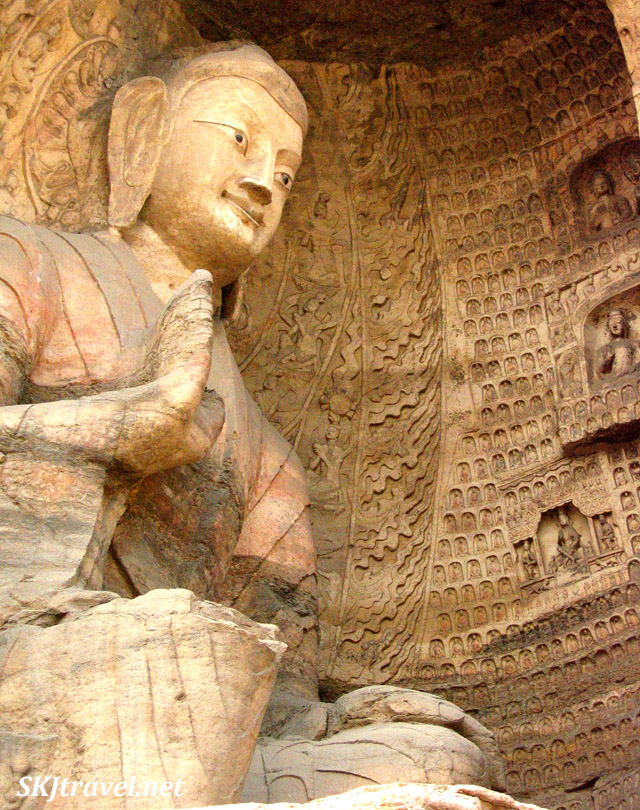 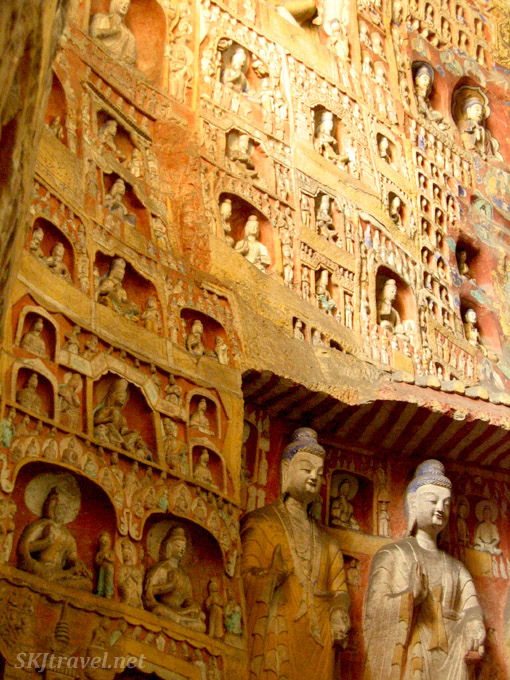 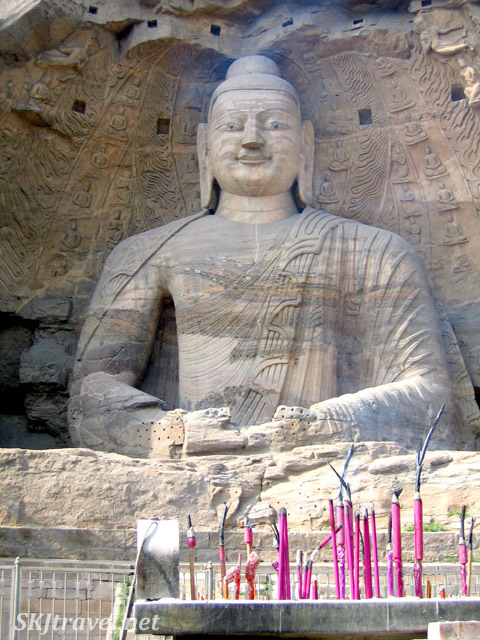 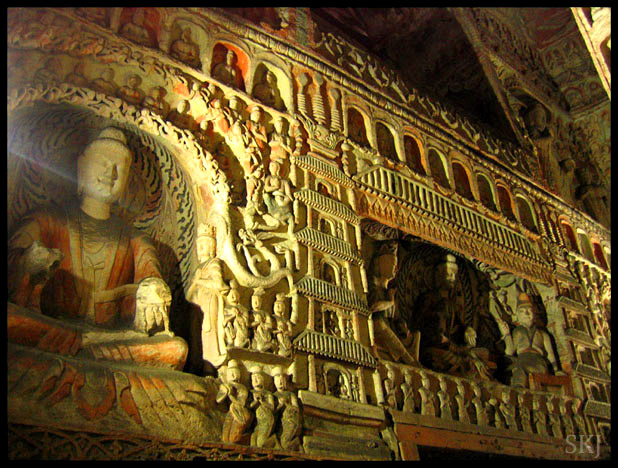 One deep cave was so huge, it had a path carved into it, you could walk a loop around a centerpiece of stone.  Every inch of the interior, several stories high, was carved into some kind of Buddha or picture scene, or geometric or floral design and then painted. I really was quite bowled over in awe. I walked through it several times. (hard to get good photos, though, without a flash)

Our second day in Datong, we went to Huayuan Temple in the city.  We walked and walked back and forth, back and forth, around in circles trying to find the silly thing (sound like adventures of last year?!?).  We thought of breaking down and getting a taxi to take us there, but became determined to find it on our own.  So eventually we figured out that the street named East Street was in fact the same street as the one named West Street, it merely was divided by the South Street. Anyway, we found it and it was a nice Buddhist temple.  Not many people there.  The main hall is very large.  The most interesting thing to me was the walls.  All the way around the inside they were painted, every square centimeter, with various scenes and Buddhas and other Buddhist and Hindu icons.  Parts of it reminded me of some of those European tapestries from the imperial times of Europe.  We mostly had the large temple to ourselves.

Then we exited onto this little street full of souvenir venders, and we were just about the only people walking down the street.  Nobody at all called to us to buy their stuff.  It was a little eerie, actually, walking down this empty street when the rest of the city is a cacophony of people and honking honking honking cars.  Erik is sure that if Descartes had lived in Datong, his motto would have been "I honk, therefore I am."  Also there are all these bicycles who's bell is like a very shrill screeching, squealing brake.  It's a bit like fingernails on a chalkboard. 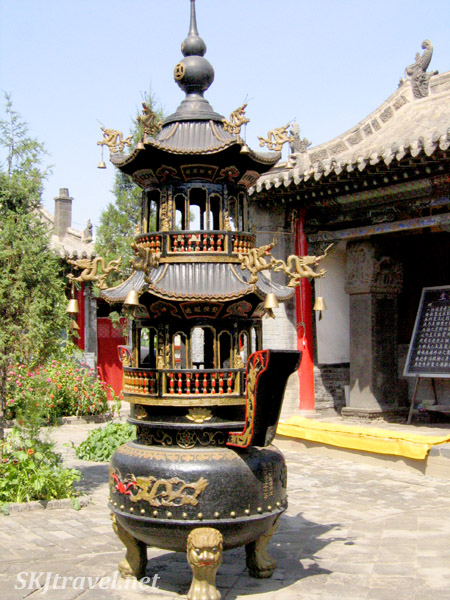 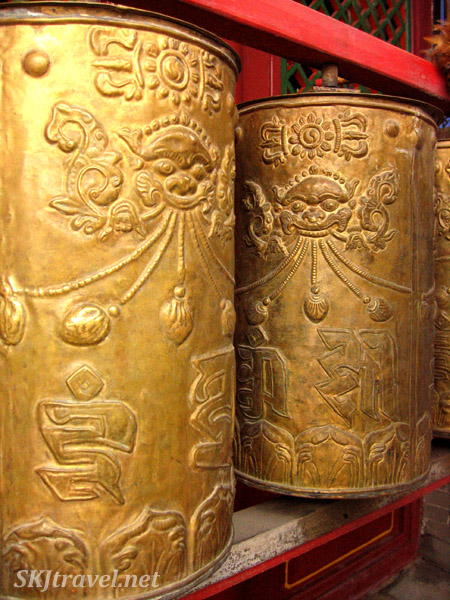 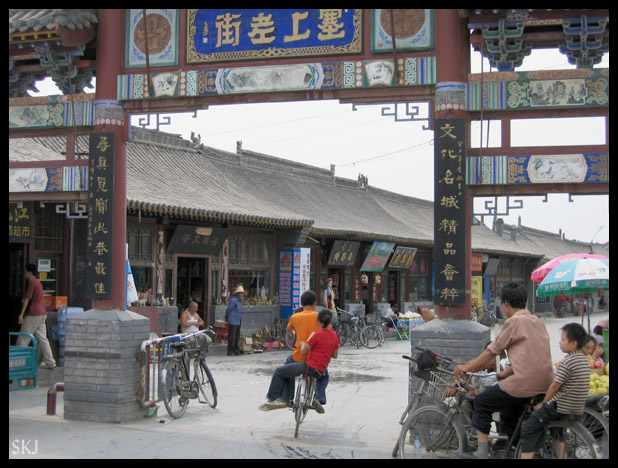 One little note of particular interest to Morris:  We saw a lady step on the back of a man's shoe, and he went ballistic over it and looked like he was going to hit her, words went flying and eventually so did a spitball from her mouth to his face.  So, we are trying to be very careful not to step on people's shoes – several incidents tell us that people here take their shoes very seriously!!

Here are some random city shots. A mix of modern and old ... cars and donkeys, modern architecture and dusty alleyways with people socializing and playing cards in them. The first photo was taken while we were waiting for the master hair-cutter to arrive to cut Erik's hair. 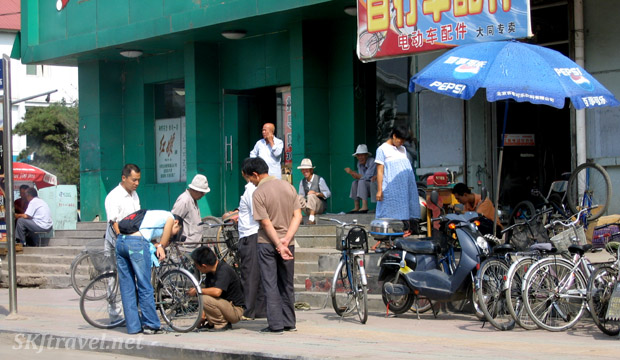 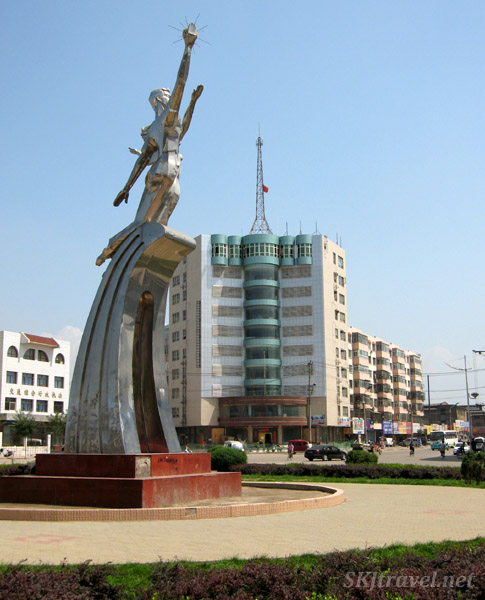 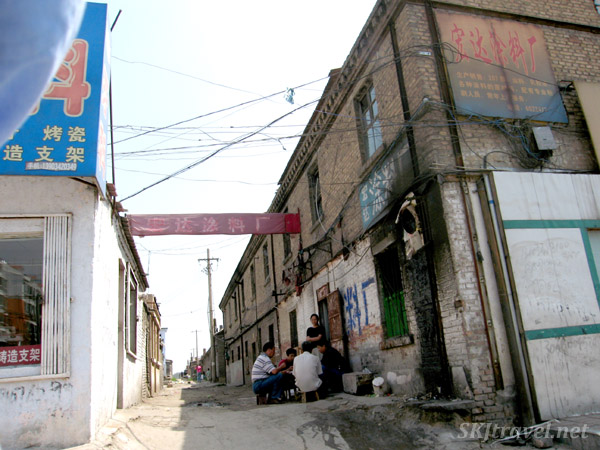 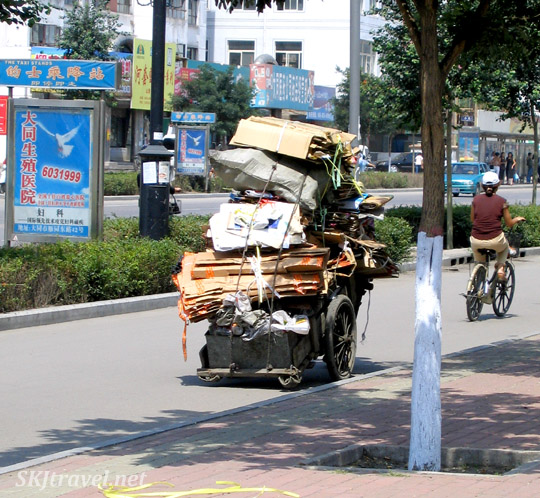