Ho-Ho-Hohhot: Up North in China

It's really just Hohhot. But it sounded jolly to say "Ho Ho Ho! Hot." ha. So we are in the capital city of Inner Mongolia. My favorite random thing so far this trip is coming out of the train station in Hohhot and seeing a monkey petting a dog.  How cute/random/hilarious is that?

So we have now twice experienced the mayhem of riding in hard seats on the train.  Let me stress "mayhem."  We didn't really know at first why everyone was literally running, nay sprinting, down the platform as soon as they were let through the ticket gate.  It's difficult, it turns out, to find any space for one's luggage (or body), so you need to be first out of the gate!  We lagged a bit behind the first time, so we ended up shoving and cramming my backpack underneath a seat. The feat was impressive until we tried to get the backpack back out!

Then we sat down next to an older man, obviously a rural sort of guy, who looked at us with polite curiosity. When the beverage cart came through, Erik and I bought beers for ourselves.  Just as the cart was pulling away, the man (sitting next to the window, beside Erik) was inspired to order one for himself.  Erik and I both had the sense that this was his first train ride and that he had impulsively ordered a beer after having seen us do it.  We had already learned that the tables on the trains have bottle openers on the underside, but the rural man didn’t notice how we opened ours and spent some time obviously puzzled over how to access his beverage.  I nudged Erik and suggested he open it for him, which Erik did, showing the man the opener on the table.  The man smiled grandly and Erik clinked his beer to the man’s.

We had some small cookies, no bigger than silver dollars, with us in my daypack, and after a time we started nibbling on them.  Erik offered one to the man.  He refused numerous times, but Erik was insistent.  Finally the man accepted it, but for a long time he didn’t eat it.  About ten or fifteen minutes after I spied him finally eating it, he got up and disappeared.  When he returned, he sat down at the table with a fully cooked bird, bigger than a cornish game hen, ripped off an entire leg and some breast meat and shoved it at Erik with a huge, tobacco-stained smile.  They shoved each other’s arms back and forth for awhile as Erik tried to refuse, but eventually he ate some. I'm pretty sure the man would not have bought that bird for himself, only to return the gift of the tiny cookie.

By the time we got off the train hours later in Hohhot, I had: (1) this photo, which I adore, of Erik with his arm around his new buddy’s shoulder; (2) another photo of Erik with the man sitting across from us who eventually revealed that he spoke English and then conversed with Erik about computers and translated for the peasant man who wanted to know about us; (3) the email address of the latter man; (4) a travel sewing kit from a man who had stood in the aisle behind me the entire time (for lack of a reserved seat) and witnessed my backpack get ripped open when Erik yanked it out from under the bench too forcefully; and (5) best of all I had my backpack patched perfectly with two huge adhesive fabric patches that the woman seated across from me happened to be carrying in her purse. Another man who had stood in the aisle near us shared a cab with us from the train station to our hotel and paid the entire fare.

I was humbled by being a part of the mini community on the train, by the generous spirit that had embraced me and my husband.  I felt like we’d been put under a magnifying glass and we were on fire in a beam of kindness. 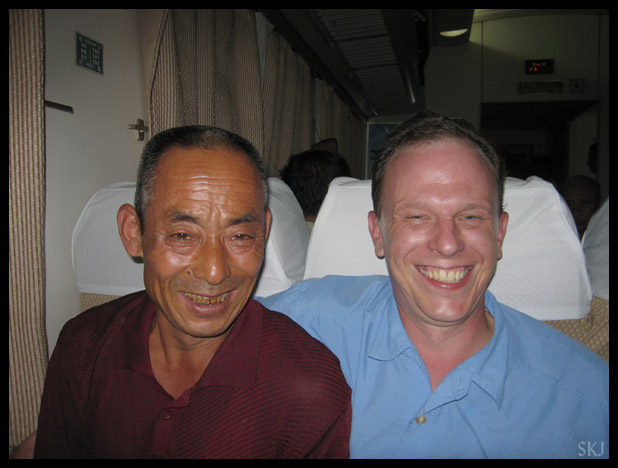 So then on our second train ride, when we didn't even have a reserved seat, we knew the routine for racing out of the gate.  We very diligently got to the waiting room early, procured seats right next to the entry gate and hustled down the stairs onto the platform right away, got into a line with just a few people ahead of us, but by the time we actually made it onto the train in the midst of a somewhat crazed crowd of people, we were rather far behind in the queue. It's interesting seeing how people with unreserved-seat tickets find a way to sleep.  One guy was sitting on top of a sink, one family was sleeping on newspapers on the floor with their legs crammed in beneath the seats (where my backpack had been last time).  Erik almost got hit by a lady whose son he had to step over because he was in the aisle in the middle of the stampede to get onto the train.  Lots of people sleep on newspapers; the area between the train cars is full of people trying to sleep.  Erik and I managed a little sleep at the expense of our necks – we forced them into some pretty contortionist positions.  The hard seats do not recline in any way, shape or form.  They are, in fact, hard (wooden).

In Hohhot we went to another Buddhist temple called Da Zhao.  It has a crew of practicing monks, so the main temple building is actually in use.  We waited and waited for all of the noisy tour groups to pass through and finally got a few moments of absolute peace inside.  Even though we were the only people in there (except for the monk eating his lunch, slurping his noodles), we felt compelled to whisper.  The altar was full of little gold oil candles flickering silently. 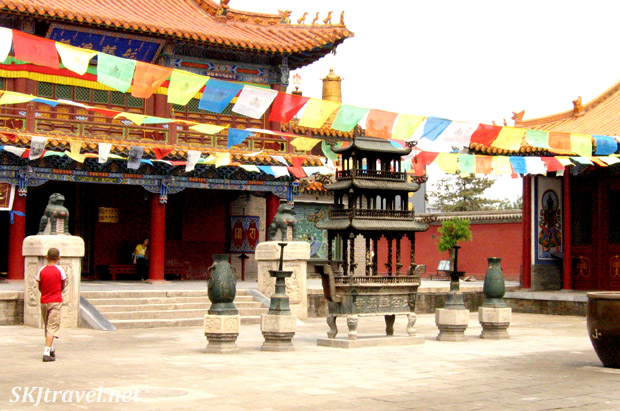 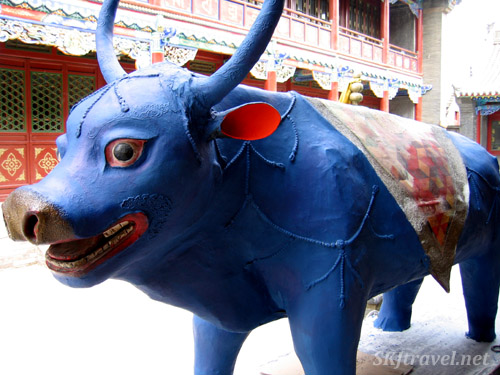 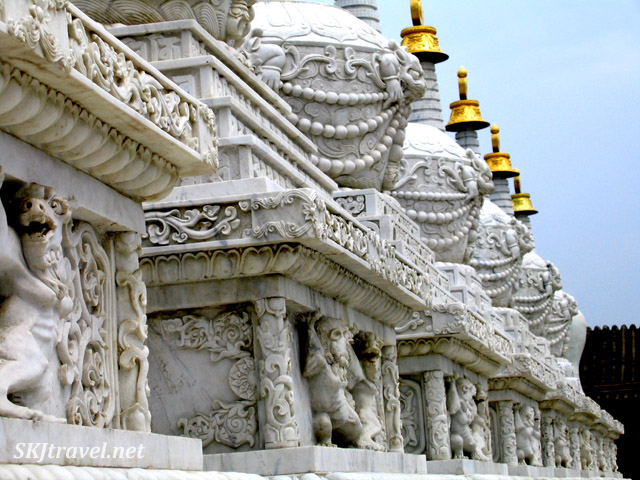 We also went to a little museum about Inner Mongolia (Hohhot is the capital of Inner Mongolia) and learned a bit about some of the minority groups that live here. There are a lot of cultures other than Han Chinese that inhabit these parts.  I think most Americans are probably unaware of that.  Went to another place called the Five Pagodas.  Everything but the 5 pagodas (one structure with 5 peaks) is long gone, but now they are rebuilding a bunch of temple buildings around it. 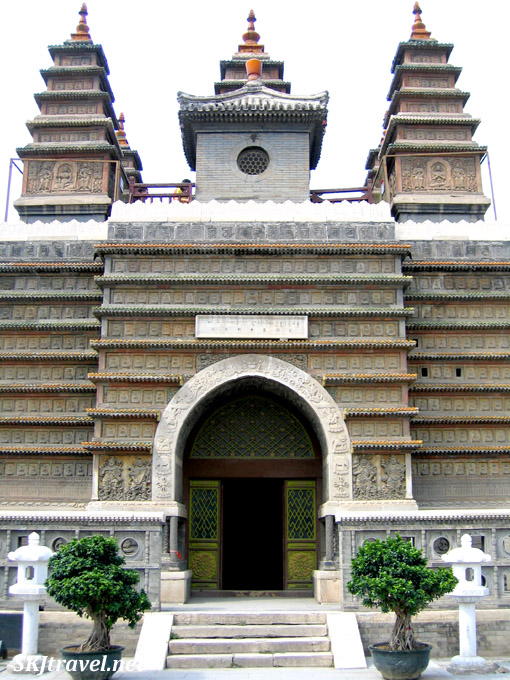 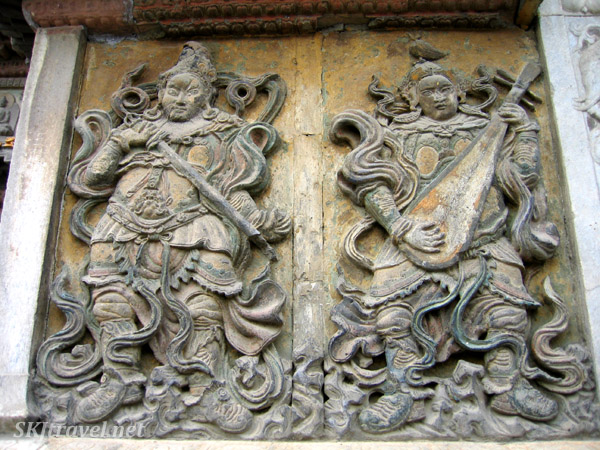 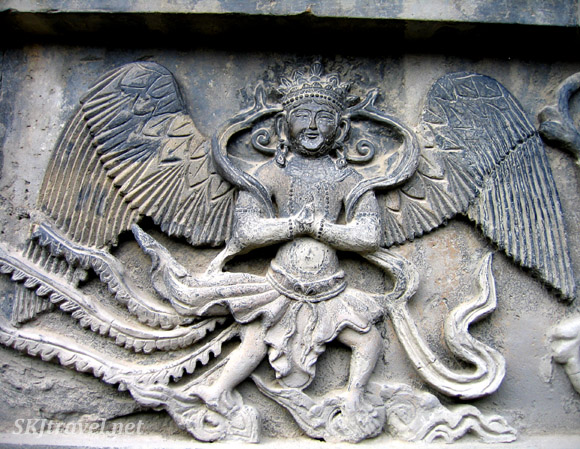 Check out the Mongolian script carved into this section of the 5 Pagoda building. It's the bottom portion with the long squiggly lines that look completely incomprehensible as a representation of words and sentences. Rather than left to right or right to left, the lines read vertically, top to bottom. We saw this script on various signs throughout Hohhot, like store names or billboards. 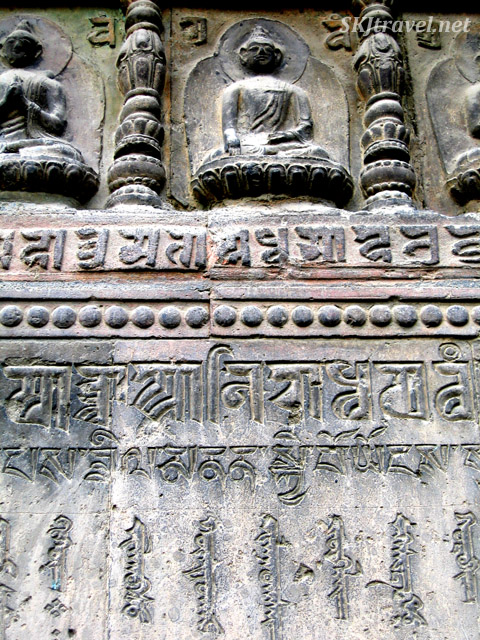 And a couple scenes from around Hohhot. Random shot of gas can on a beheaded statue, and a variety of things for sale in this neat road full of shops. Sitting outside are bird cages ... birds are extremely popular pets in China. As are crickets. 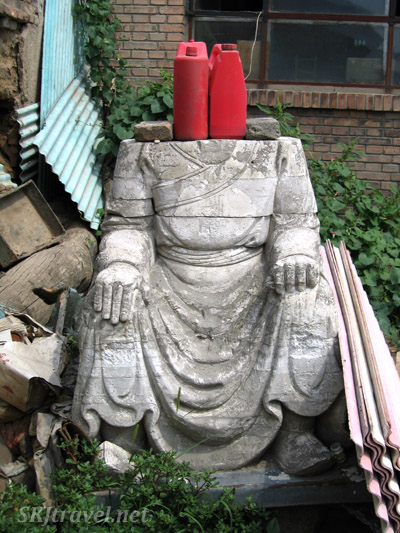 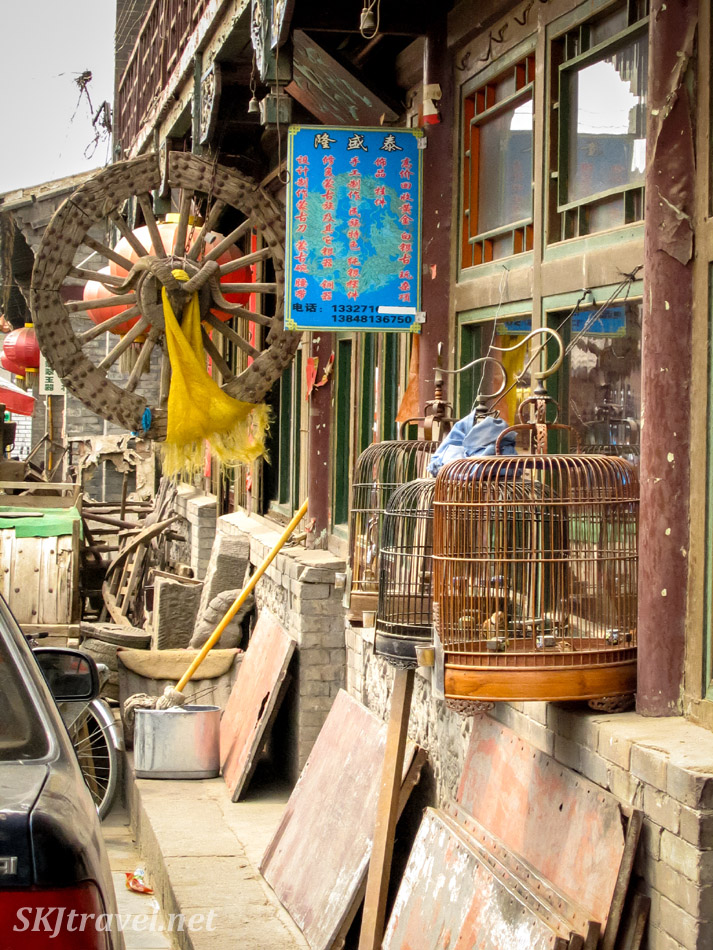 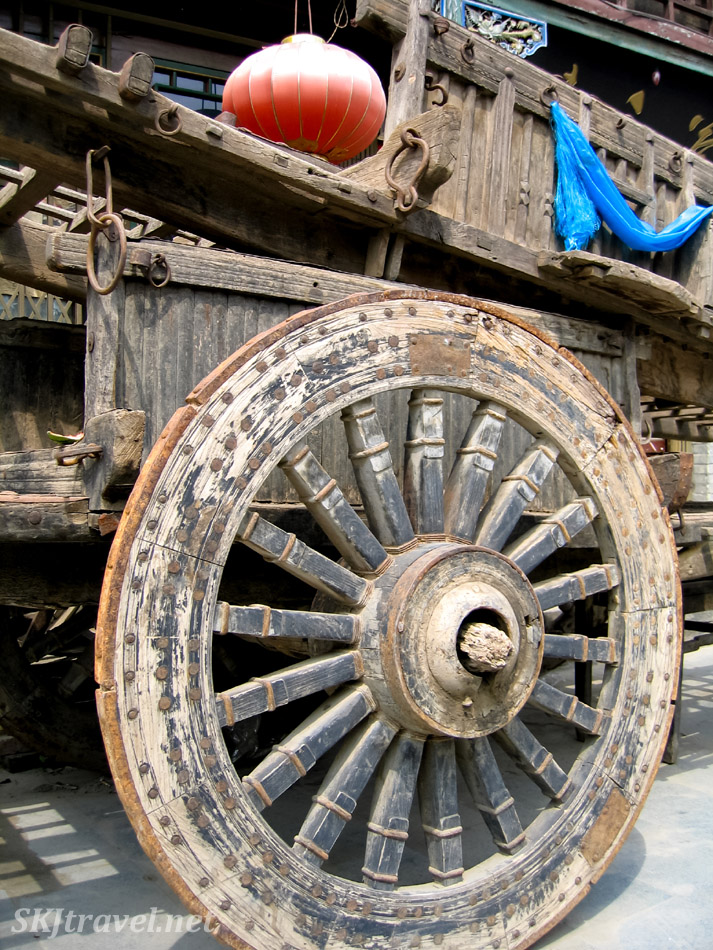 We were looking for a way to kill time the night before our train left Hohhot at 10:30pm.  It just so happened that our hotel had a bowling alley in the basement!  So we bowled a couple of games.  We were the only people there besides the people working (three of them to take care of virtually nobody – such a common theme in China).  It was a really random activity to be doing in China, but we had a swell time. Erik started out strong and impressed the pants off of the erstwhile bored employees. But then he lost his mojo and the audience dispersed back to whatever had been killing their time previously. Then it was off for another train adventure to Yinchuan.

Hope you run across something fun this week like a monkey petting a dog.