Pilgrims and Us at Labrang Monastery

We made it to our next destination, a small town (Chinese standard of small) called Xiahe.  It's certainly the smallest town I've been to as a tourist (i.e. not on expedition) in China. We are here to see a famous lamasery, the Labrang Monastery. There are numerous sects of Tibetan buddhism, this monastery belongs to the Yellow Hat sect, which happens to be the one the Dalai Lama belongs to. We are also close to the Great Grasslands area ... it's pretty landscape. This is the closest to Tibet we will come, both geographically and culturally, though, we're really not very close geographically. But this is a practicing Tibetan Buddhist monastery, and actually resides inside what is designated as the Gannan Tibetan Autonomous Prefecture within Gansu. 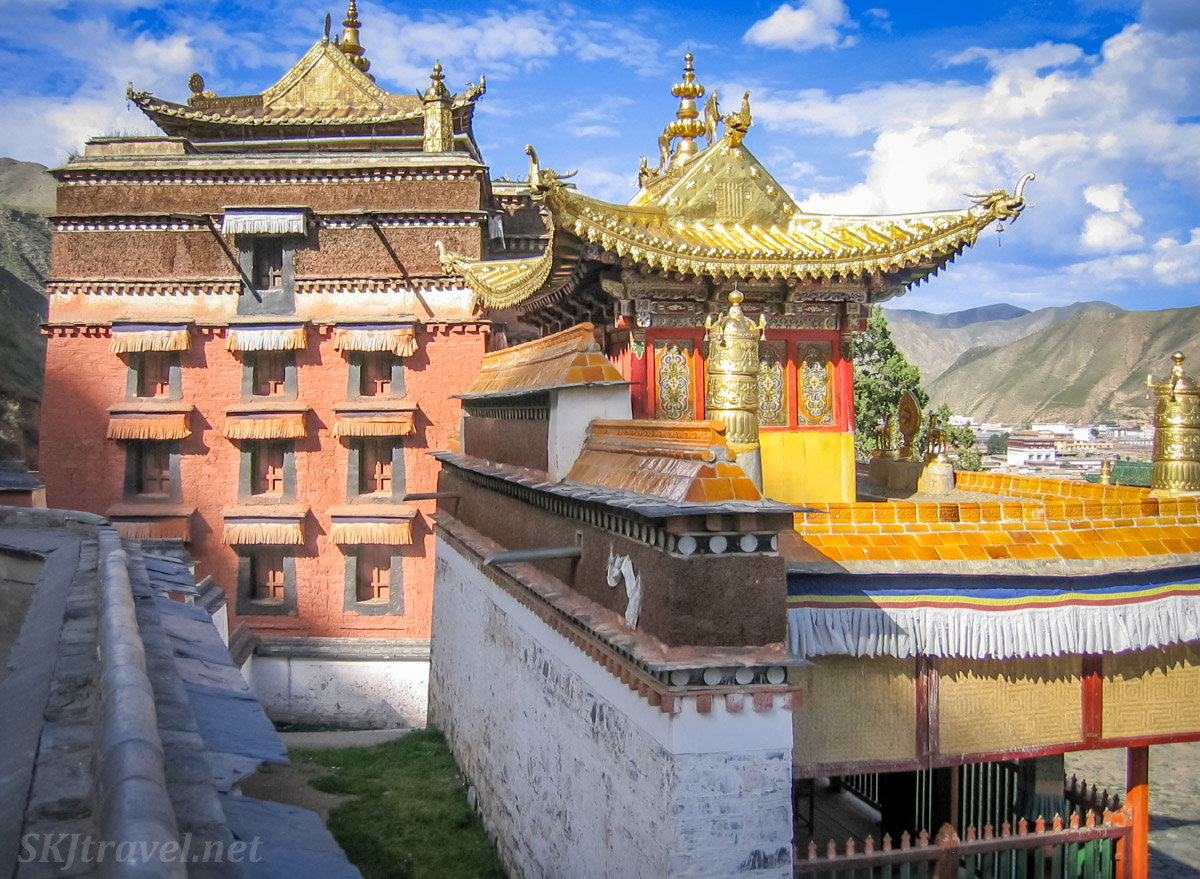 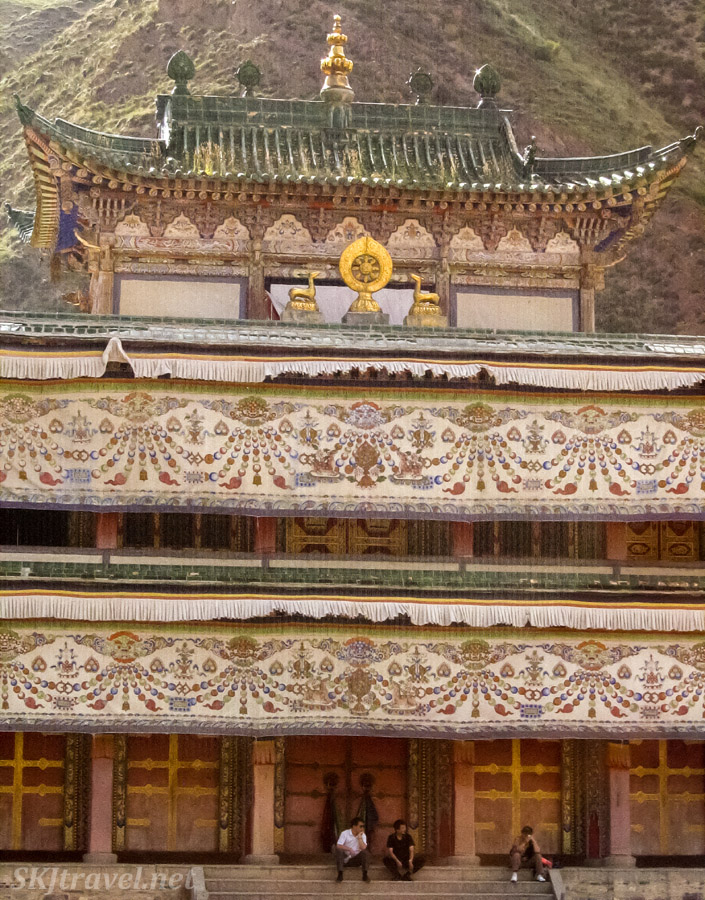 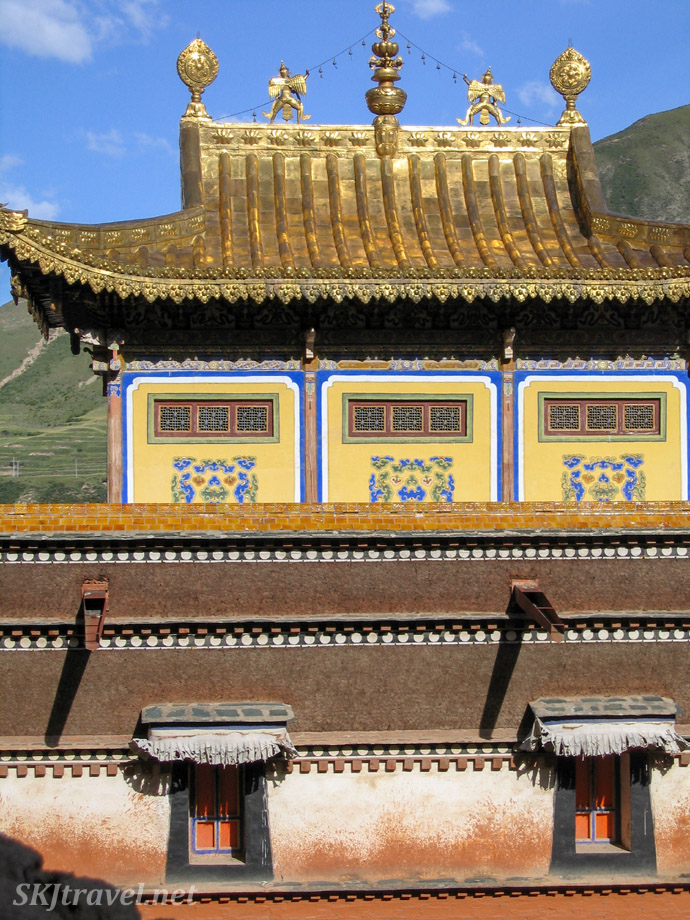 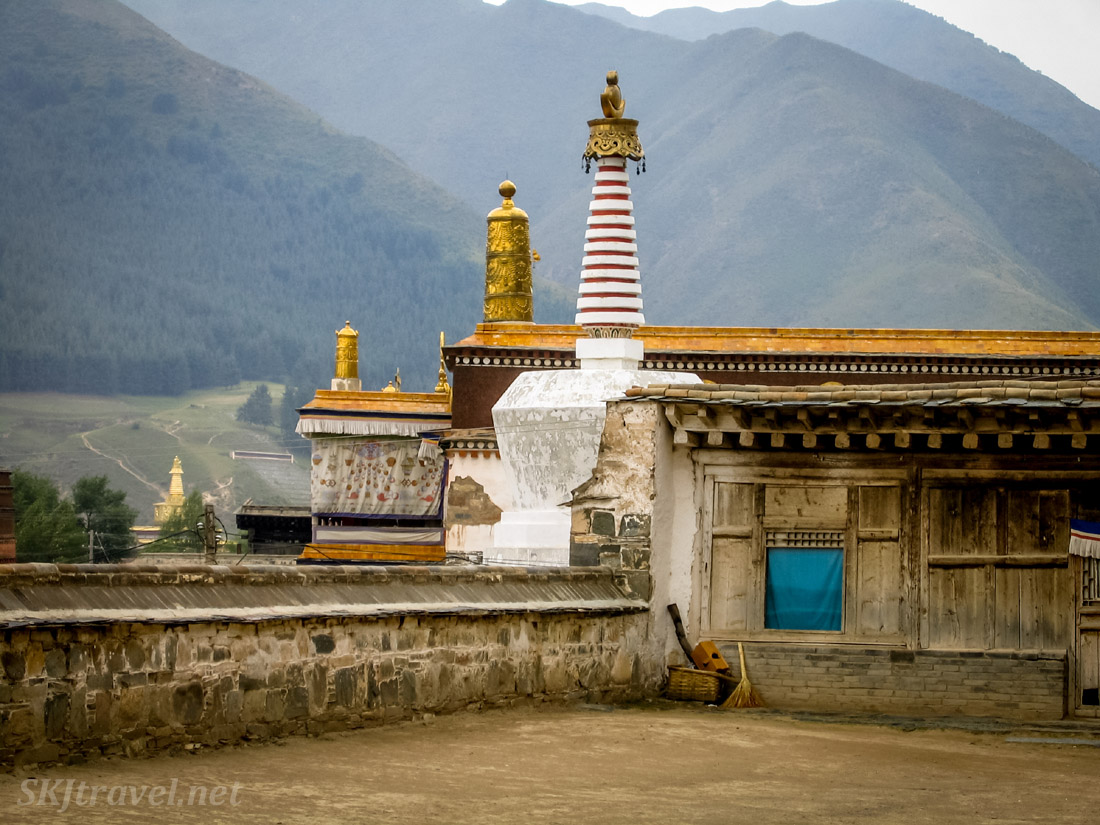 The train ride from Yinchuan to Lanzhou, from where we caught the bus to Xiahe, left some to be desired.  It was another overnight ride, so we hoped to sleep since we had purchased reserved seats, but it was an "ordinary" or "slow" train which means no AC and the "hard seats" are somehow even harder than on the fast trains.  Don't ask me how they accomplish this; it really defies the laws of physics how hard this surface material can be.  And the seats were closer together and the backs I think had to be at an acute angle of about 80 degrees.  Just brutally uncomfortable and we slept very little.

Catching the bus from the train station was amazingly smooth, and I'd been kind of dreading figuring out how to get a bus here, mostly on account of the language barrier.  The bus was quite comfortable but we tried to keep ourselves awake in order to watch the scenery on the 4.5-hour ride. It was certainly lovely ... pretty mountains and small villages, and lots of hay harvesting.

The monks of the monastery are everywhere on the streets in Xiahe, and a lot of the women here are wearing traditional sorts of dress with the felt hats and bright colored shirts and vests.  Reminds me of the women in Peru wearing their bowler hats.  The main street, which leads up to the monastery, is pretty much nothing but souvenir shop after souvenir shop.  There aren't even that many tourists here.  There were only 4 other foreigners on our bus with us.  Most of the shops are completely empty.

Below is a glass of Tibetan tea, or at least that's what the menu advertised it as, that Erik tried at a restaurant just outside the monastery walls, overlooking it. Beats me what in the heck all the stuff is in there! 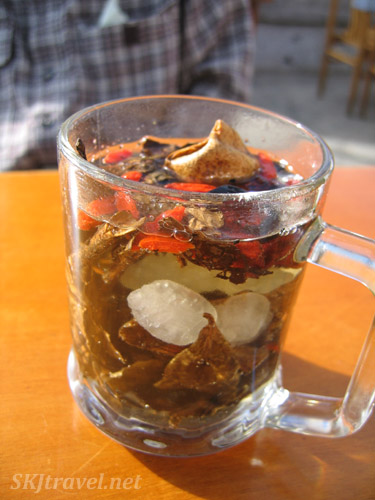 Labrang is the last monastery on our northern tour (or indeed of our entire tour). Xiahe lies high in a mountain valley next to the Daxia River at 10,000 feet above sea level. 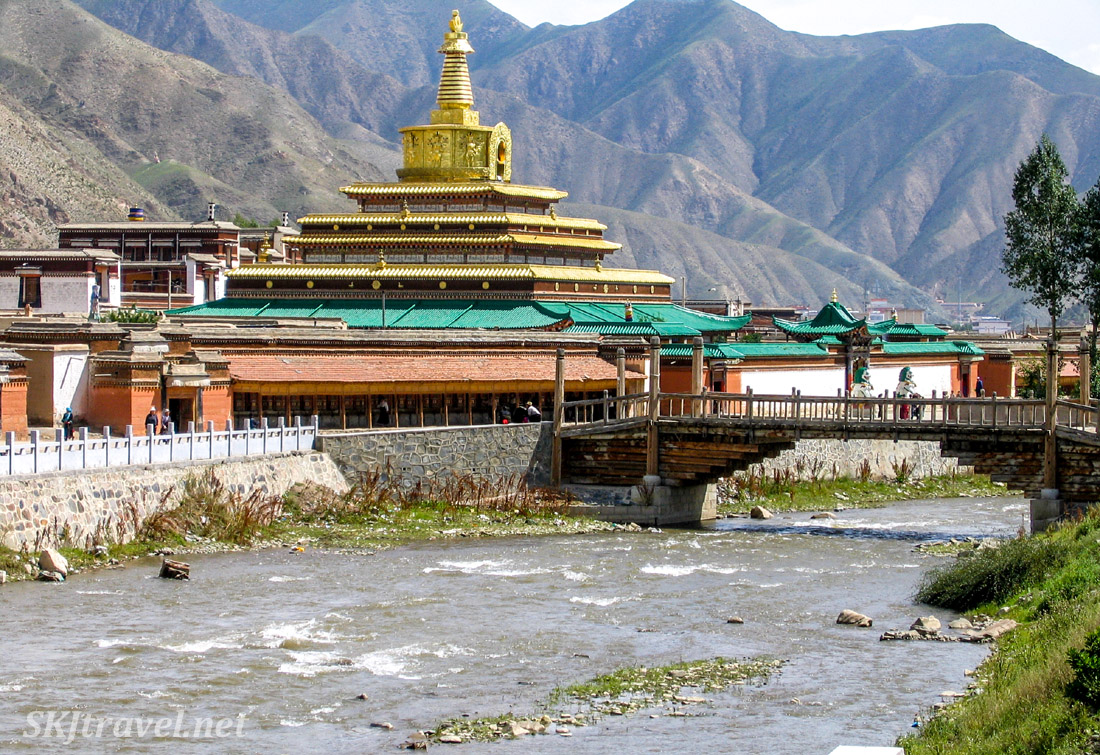 One of the most interesting aspects of this beautiful monastery is actually the people.  It really is a little bit of Tibet here.  The monks in the monastery are mostly Tibetans and many of them don't even speak Mandarin, just Tibetan language.  The people walking the streets are largely Tibetan also; lots of very old women with their silver hair hanging in two braids down to the small of their back and tied together at the ends, shuffling down the streets and along the "Pilgrim's Way" turning the hundreds and hundreds of prayer wheels.

This Pilgrim's Way is what drew me to put this particular monastery on our itinerary -- a corridor over three kilometers long encompassing the entire monastery complex, full of prayer wheels that the faithful come to turn each and every one, asking for their prayers to be answered. 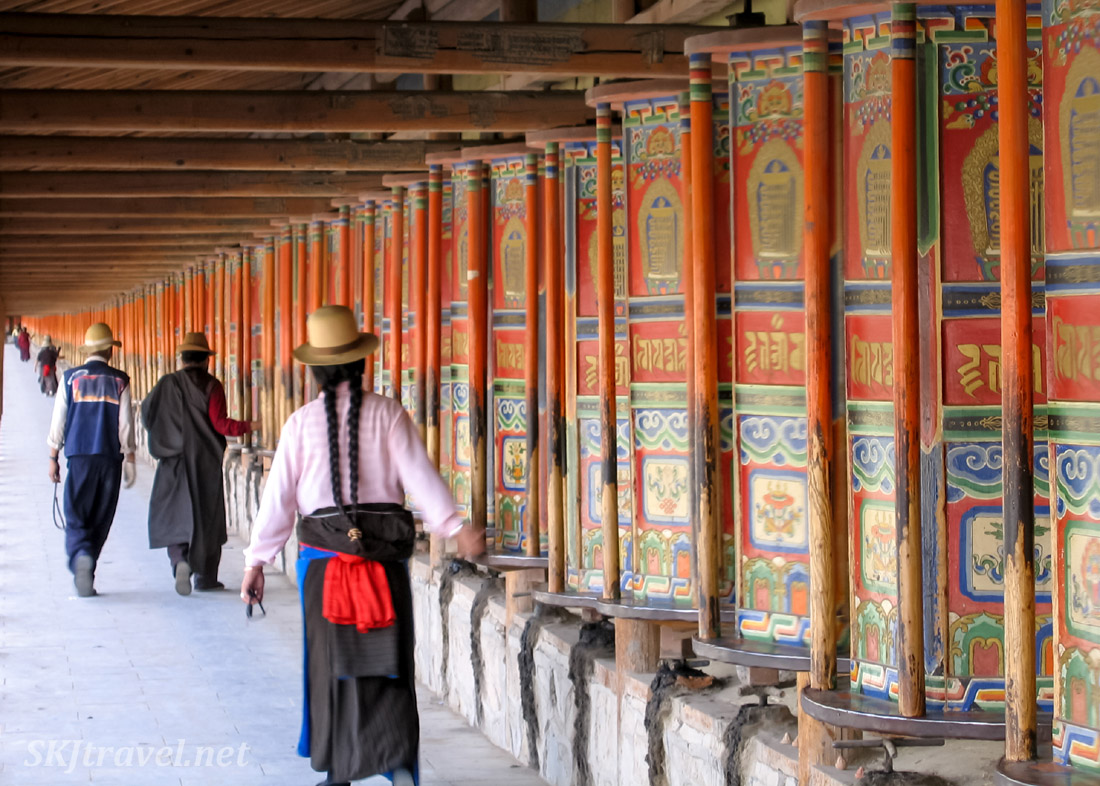 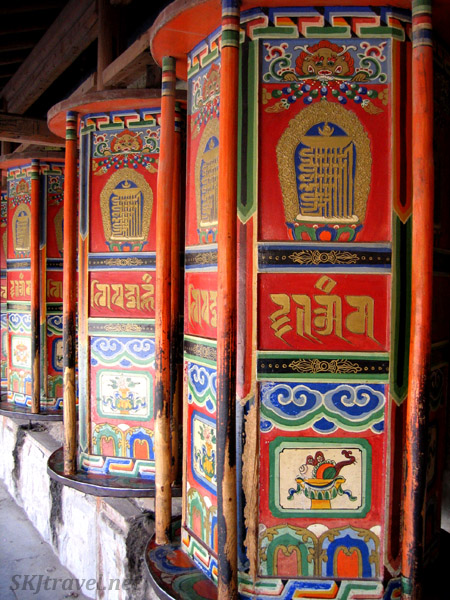 Monks of course are everywhere in their red and pink robes.  The other temples we've visited have been sort of isolated temples even if they're practicing temples, they exist somewhat as an island.  Whereas here it's an entire Lamasery, a whole village of monks, we were told over 1,200. It's kind of like a college here, there are six "degrees" you can study for regarding Buddhist ideology and traditional Tibetan knowledge (calendars, etc.).

You can wander all through the outside of the Lamasery and through the little alleys along which lie their living quarters. The first two photos below show little hovels were monks go to meditate in solitude, sometimes for days at a time. 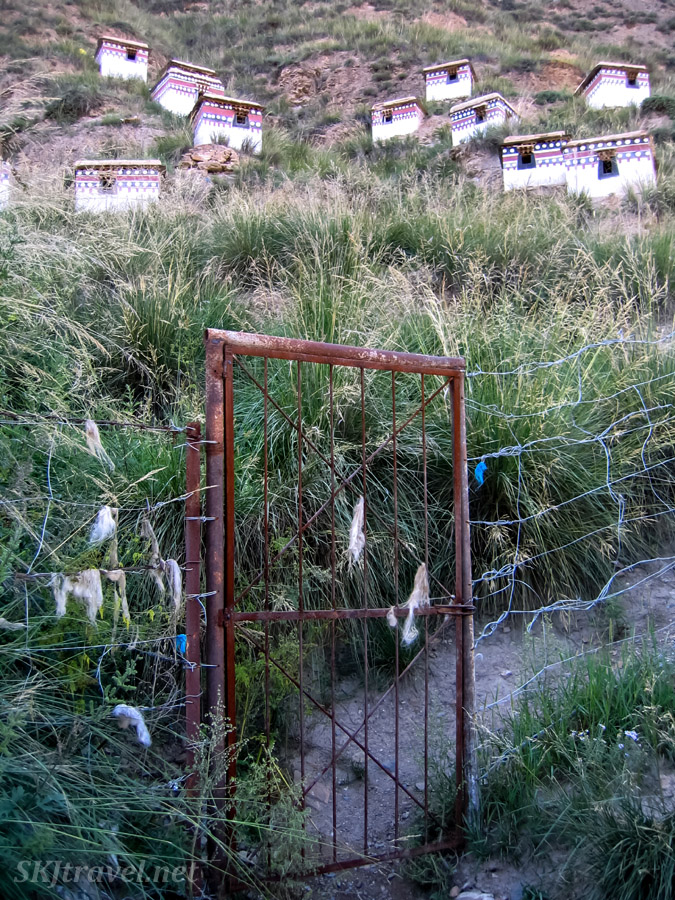 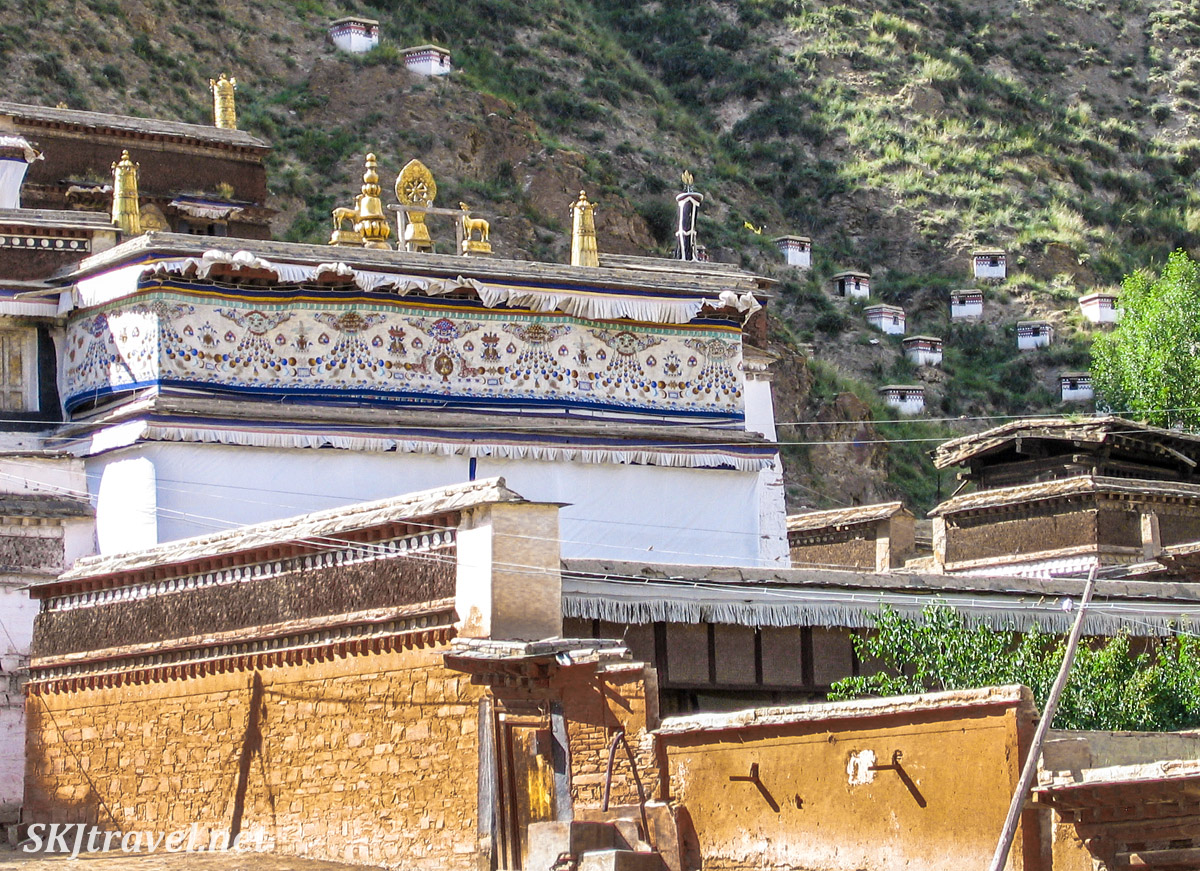 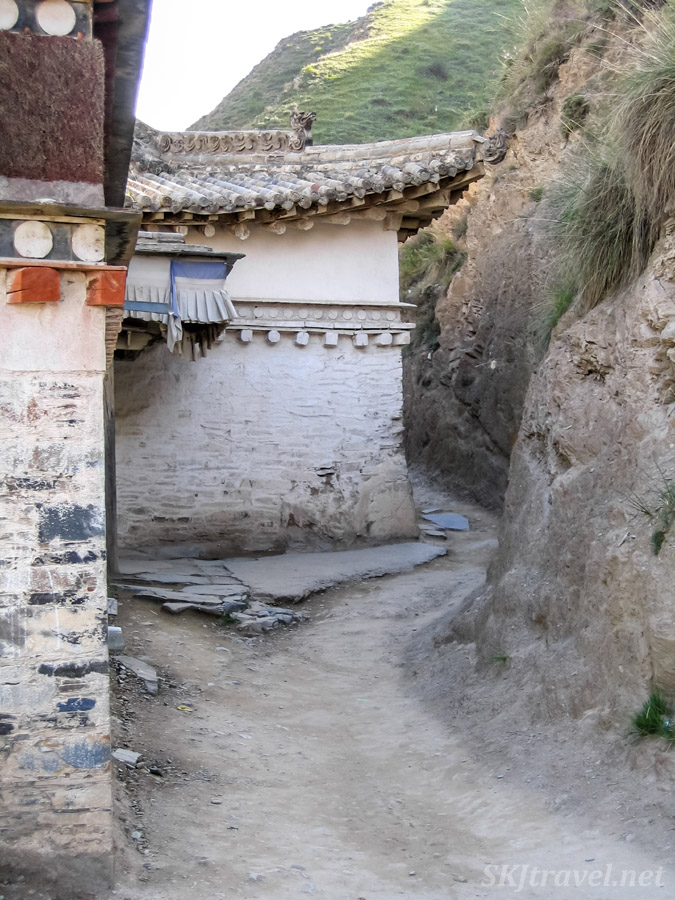 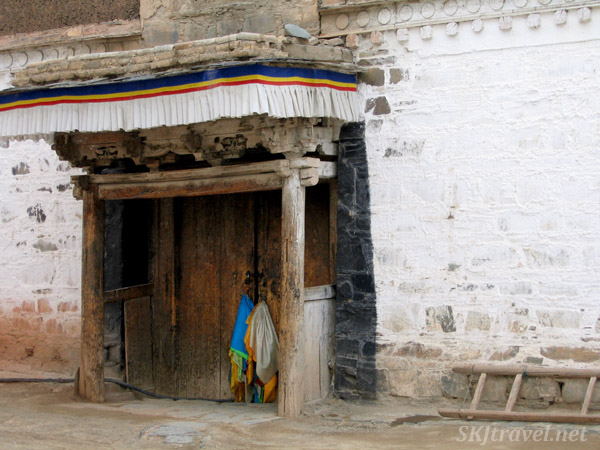 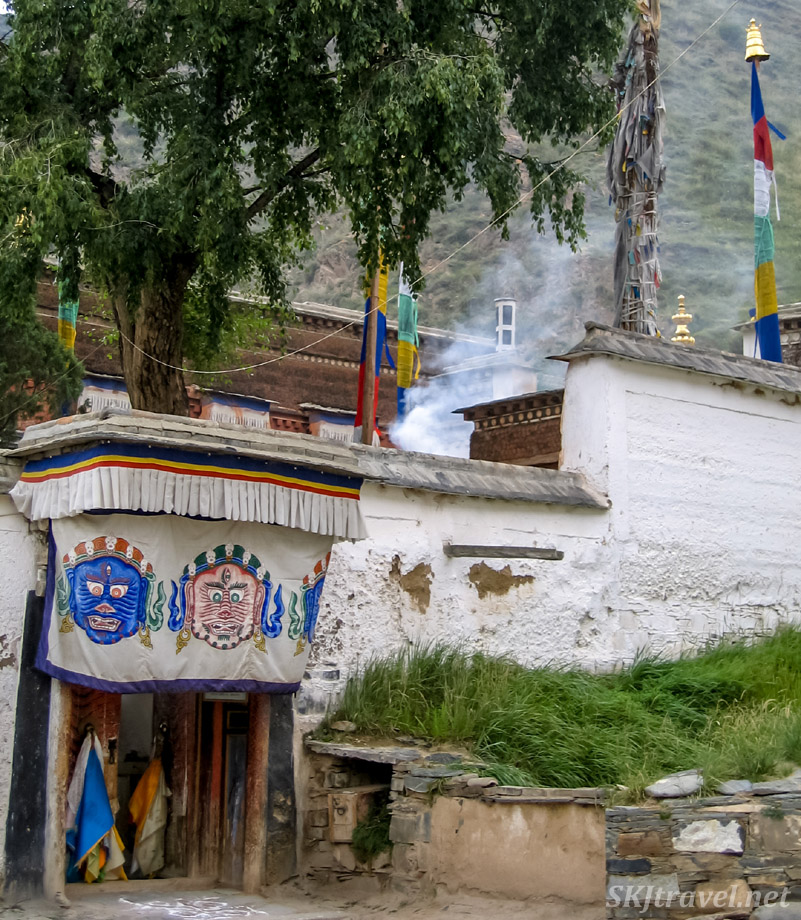 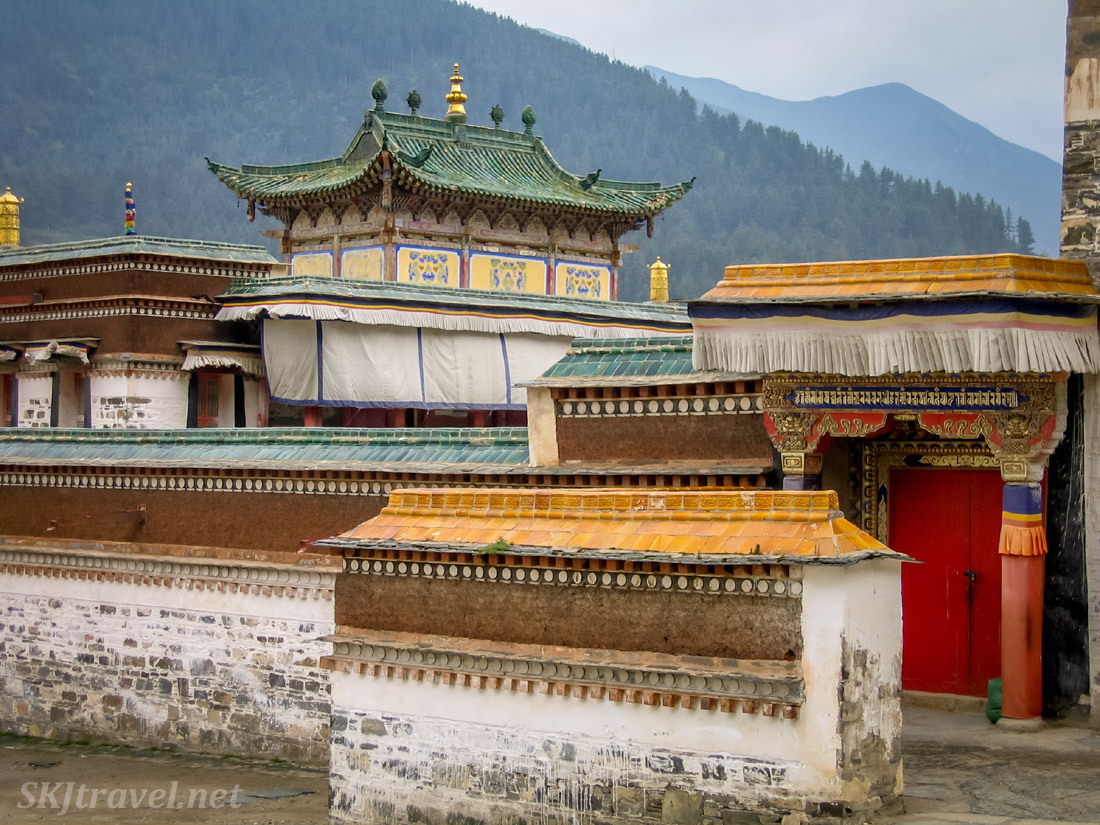 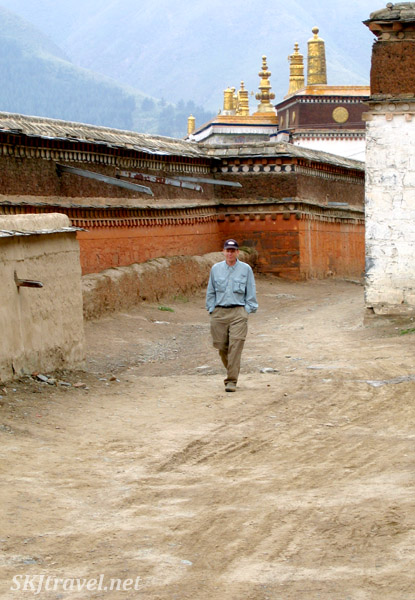 You are required to have a monk guide to go inside the temples.  They are very dim inside and somehow reverential, contemplative, lit by very small wattage light bulbs at one end and by several candles of yak butter. Therefore, these temples smell of butter!  One room (the only one in which we can take photos) is of yak butter sculptures that the monks make once a year for the New Year. They leave them on display all year, then melt them down and destroy them at the end, and create new sculptures for the next year.  Quite astounding what you can do with butter! At this altitude the air is cold enough that the butter does not melt inside the windowless display room. Can you believe these photos are colored butter? 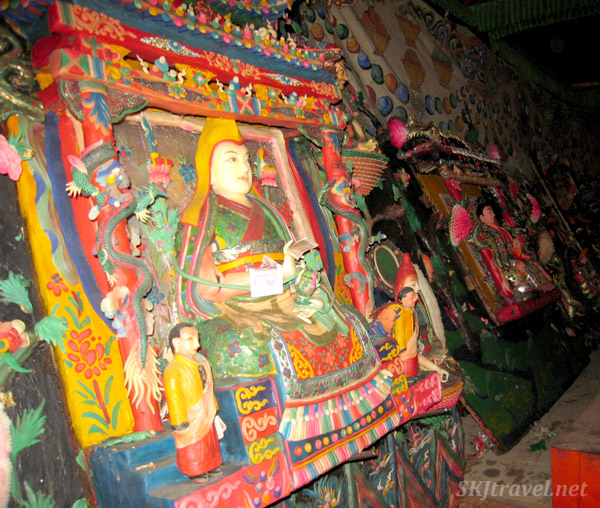 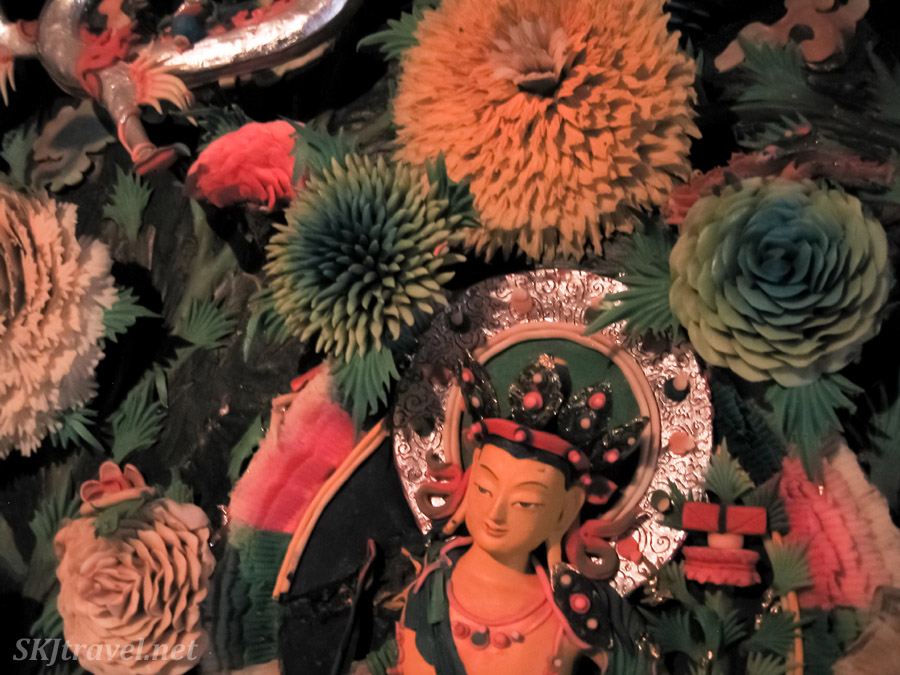 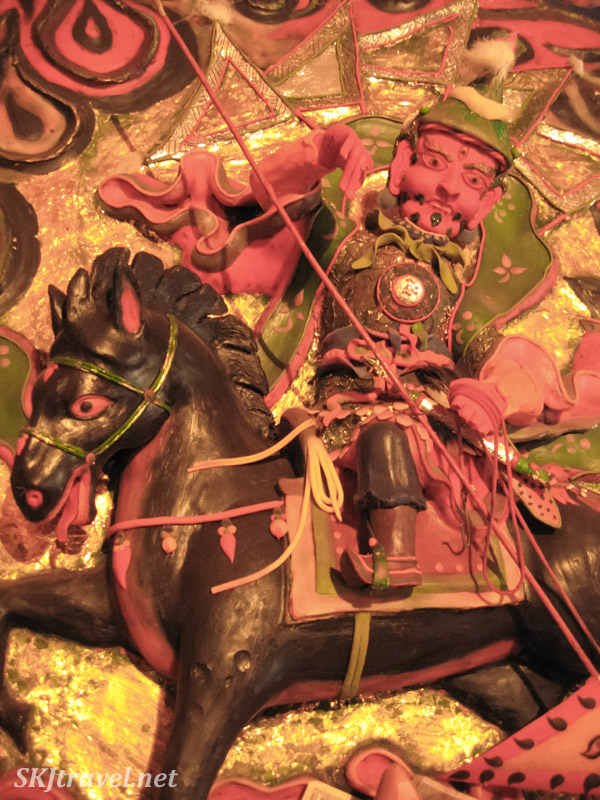 In the morning Erik and I climbed up a hillside and got a good view down on top of the city.  Then of course I log-rolled down a section of hillside.  And then we climbed up higher and sat and watched the hawks gliding and riding the air currents, soaring back and forth.  There appeared to be a nest not far away, as we could hear chirping from a spot in the trees and one hawk kept coming back to that spot.  From here also you can see that the ridges of the mountains all around have prayer-flag poles on the top. All over the ground were little pieces of paper we thought at first was careless litter. But they are paper wind horses, printed here at the lamasery. You invest your prayer in them and let the wind carry them away. 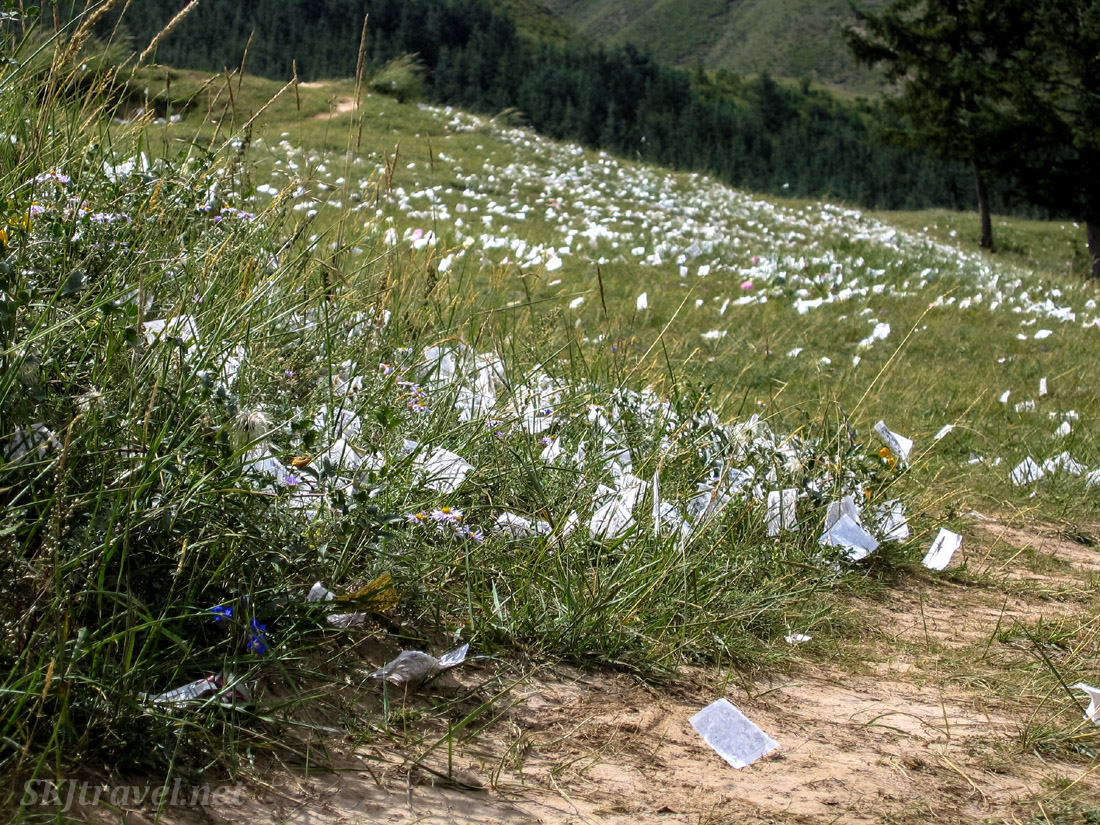 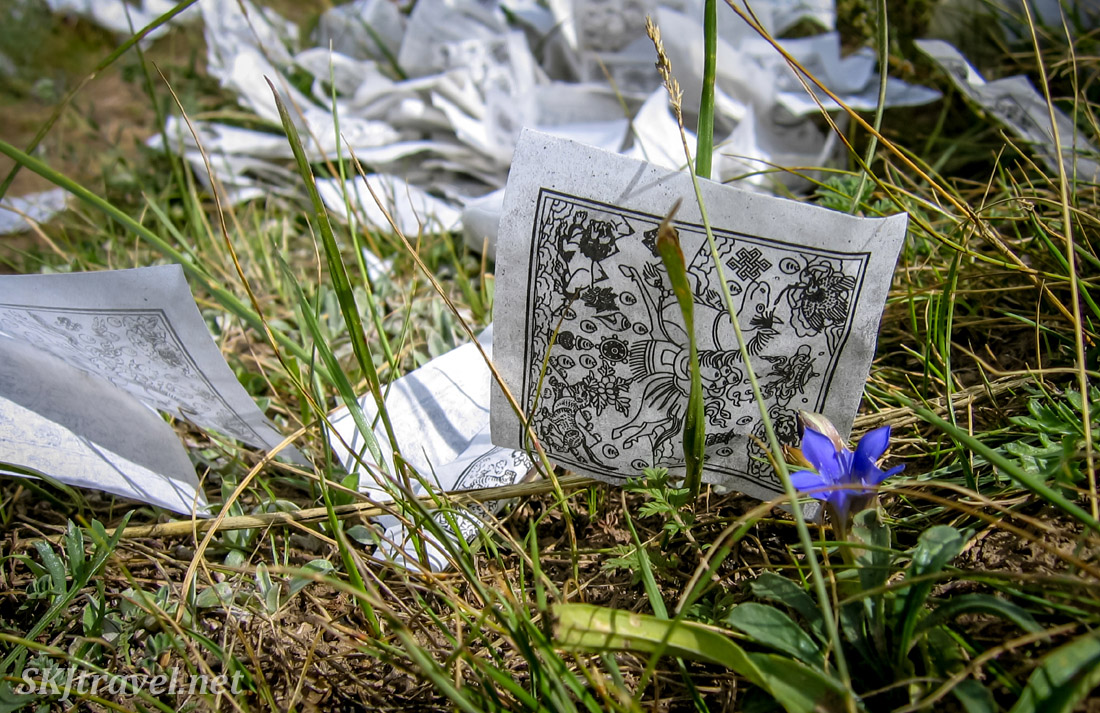 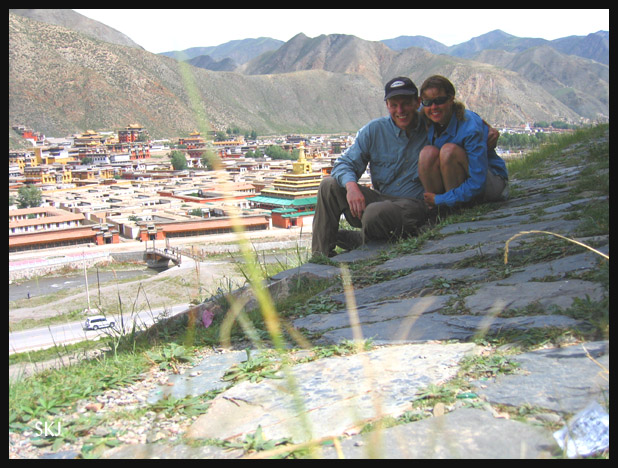 I am not a Buddhist, but this place seems intuitively, refreshingly sacred or spiritual.  Even if there never was a Buddha, even if no Buddha effigy ever acknowledges the offerings of incense and white scarves left for them, even if all the prayers invested in the prayer flags are heard only by the cold, dry air, the people coming here and walking around and around the lamasery, even the very old and crippled, walking in silent meditation is impressive to me.  It seems to me that these people have a deeper sense of spirituality than people in America who drive a car to church once a week to sit on padded seats in an air- conditioned or heated building to listen to someone tell them what to think and how to feel.  These people come to Labrang and spend their own energy and walk in silent contemplation, in search of their own penance, to find their own personal redemption, or to pray in earnest. Some will prostrate themselves fully on the ground every few steps all the way around the Pilgrim's Way, over three kilometers.

I love the colors of the buildings ... the painted walls, the various banners, bright roof tiles, gleaming golden shiny things on top of the roofs. It's a very vibrant place visually. 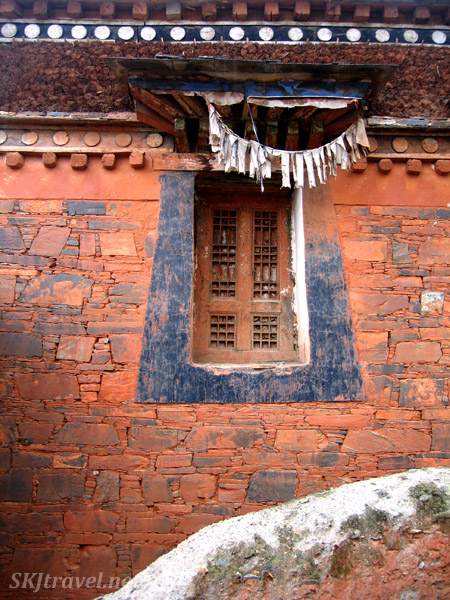 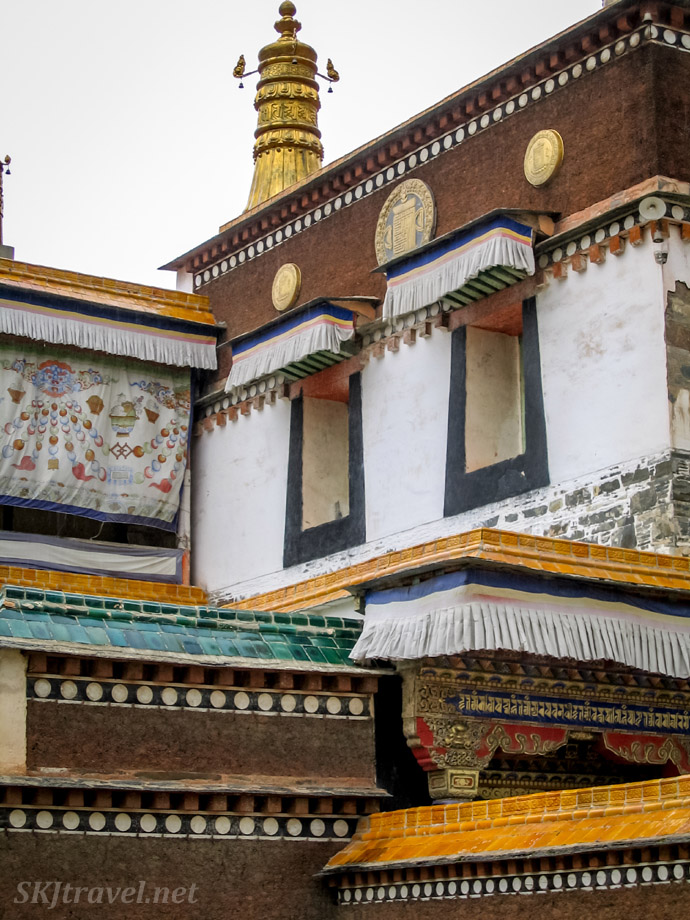 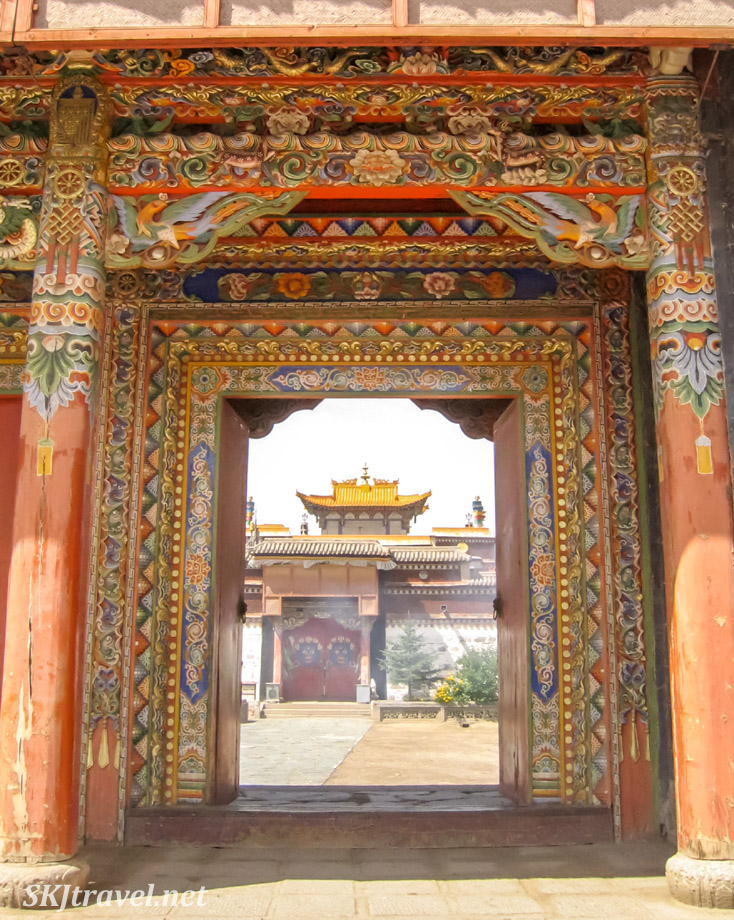 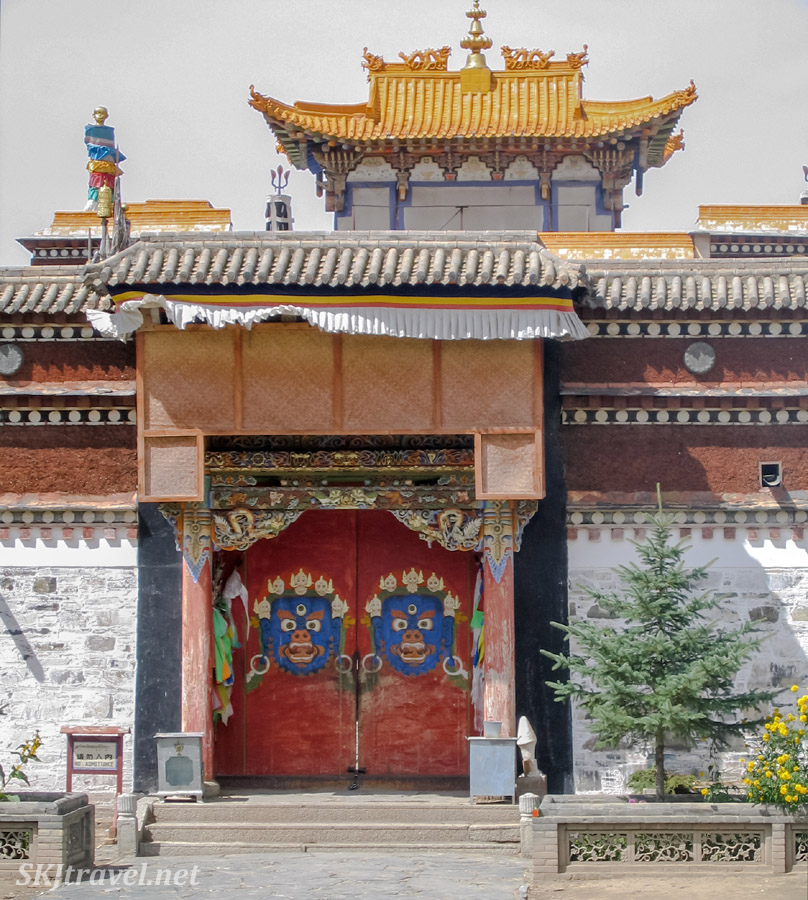 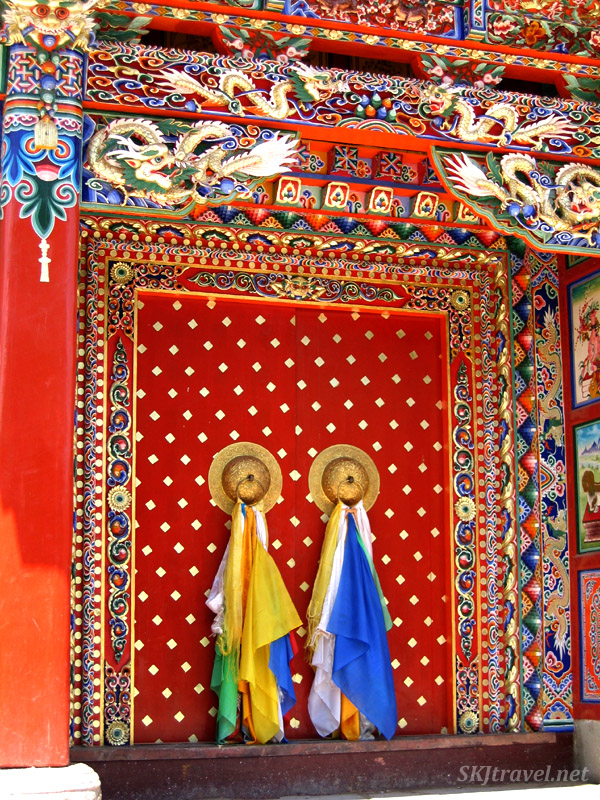 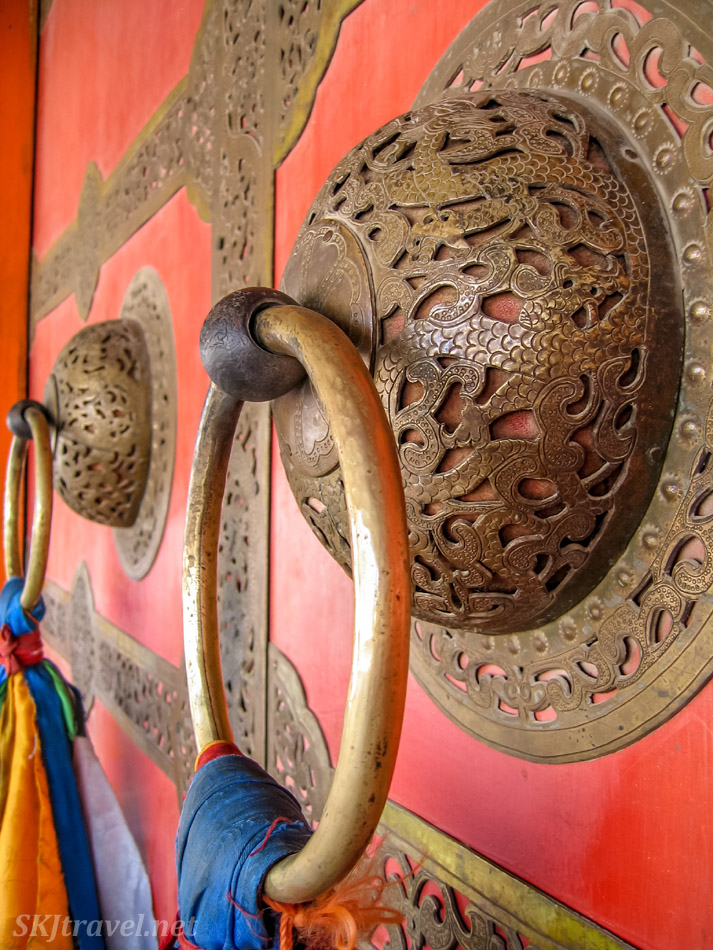 We're staying in a hostel here in Xiahe, our most budget accommodation to date, but adequate. I slept some, but the room is absolutely freezing; I wore many layers of clothes to bed inside my sleeping bag. We can only take showers in a common shower between the hours of 8-10pm and 9-11am, but even though I desperately need a shower, I'm not keen on the icy air here on my poor bare skin. We have, however, come to understand why there are "hot" showers only 4 hours each day -- the water is heated by a big coal-fired furnace.  We watched a group of women form a "bucket brigade" to move the coal, which was dumped by a little three-wheeled tractor into the courtyard. From there they handed it over from person to person until it reached the furnace.  It was quite a production and afterward they washed the soot out of the courtyard with a hose.  A large sweaty guy shovels coal into the fire to heat the water.  The water can't really be labeled "hot," but under the circumstances, it's a pretty darn good deal, seeing what they go through to provide this luxury.

Yesterday riding the bus to Xiahe, we noticed the relentless toil of the masses of humanity.  Little frail women were shoveling road grade, men and women were bent over in the fields everywhere we looked; it really sets in what a country of manual labor this is.

This evening I write to you a wee bit distracted because I've still got in the back of my mind this jacket to buy down on the strip of souvenir shops.  The vendor and I parted ways when we came to an impasse on the price.  It would be worth going back and paying a higher price, but geeze I have so many coats already ...  I just love those mandarin collars, though, and the colorful stitching.  So I'm partly using this internet time to distract me from wanting something I know I really shouldn't get!  So...anyway, tomorrow we will catch a very early bus to take us away from this ethereal place.

Read the postscript about that coat I wanted.

My award-winning essay for the WanderWomen Write travel writing contest, "My Only Prayer," was inspired by my time here at Labrang.