Caves in Guilin and Coughing in Lanzhou

We caught our bus from Xiahe to Lanzhou with no problem, but are glad we took the advice of the girl at the front desk who told us to get there right at 6:00 am for the 6:30 bus.  As with any public transportation in this country, it's just mayhem and confusion.  We fortunately had assigned seats and were not brought into the chatter and confusion. I watched out the window and saw numerous Muslim mosques and minarets.  Especially the minarets rising high up above the agricultural fields with gold spheres on top.  They really stand out.  It's funny that these little poor villages have these tall, sparkling golden minarets in their midst.

Sitting next to us on the bus was a little kid with his mother and his kitty cat on a rope.  When I saw him bring that cat on, I thought there was no way it was going to make the five-hour bus ride without running around all over the place.  But just like the little kid, it sat in the father's lap in the next row completely complacent.  When we stopped once for a toilet break, the kid and Erik started feeding little tidbits to it.  Erik fed it some ham and the kid was trying to get it to eat something like carmeled popcorn.  The poor kid was terribly car sick.  Fortunately the bus is equipped with barf bags and the mother held the bag open for him while he retched his little guts out.  But he bore this in silence and then fell asleep in his mom's lap.  At that rest stop, for some reason his mom let him eat some snacks, too, along with the cat, and a short while later he had to go through expelling it all again.

We were forced then to spend some time in layover in Lanzhou, a city whose distinction is being one of the most polluted cities on the planet.  And apparently my lungs and throat can verify this fact.  It is an industrial city in a valley surrounded by mountains.  We could only get an evening flight out to Guilin the following day after we arrived, so we were torn between coughing all day outside from the pollution or coughing all day inside our hotel room in the Friendship Hotel from the horrendous cigarette smoke smell.

In the evening (when we arrived) we walked through the outdoor markets.  I think these were the most interesting one we've been through yet.  Much more diverse, and rows and rows of about every product you can think of (and plenty you can't think of!).  Things like whole sheep heads, monstrous crickets in little cages (they sing for you), futons made right there on the spot with big machines, live eels in tubs of water, kooky mushroom things, things that we're theorizing are maybe sheep bladders or something ...  I kind of wish I had one of those cricket cages; they sing very loudly, though to look at those critters is very disturbing.  They're like mutant gargantuan crickets.  Lots of mega produce, e.g. their chives are the size of our green onions back home and their green onions are the size of our leeks and their leeks, well, you can just imagine.  Potatoes like softballs, massive tomatoes.  And why do we try to genetically engineer huge vegetables?  Whatever they do here works quite well (perhaps you know what kind of fertilizer many of the peasants use; some may find that disturbing but it doesn't seem any more disturbing to me than all the genetic hocus pocus and pesticides and strange things we use in America!).

In the morning we went to a grocery store to get food for breakfast.  And wowwee, what a store.  Rows and rows of "fresh" stuff, like deli meats, cheeses and cold salads, breads and sweets, and potato chips and snacky foods, all made right there at the store, and dumplings (more varieties of everything than any American store) and we had a really yummy egg and bread thingy.

Guilin is quite a beautiful city that unfortunately is very hard to see its beauty for the thick haze. But at least, unlike in Lanzhou, we could breathe! It is in a valley surrounded by huge spikes of forest-covered rock-mountain things ... the best way I can think of to describe the karst topography. :) Basically, it's like the land is a bunch of camel humps and you're walking around on the flat part of the back of a multi-humped camel. Now I know what it feels like to be a fly on a camel! (naturally, I have always wondered .....) And ... how random is this? We ran into a camel tied to a post outside a parking lot. So, you can see what I'm talking about with the camel analogy to the landscape. 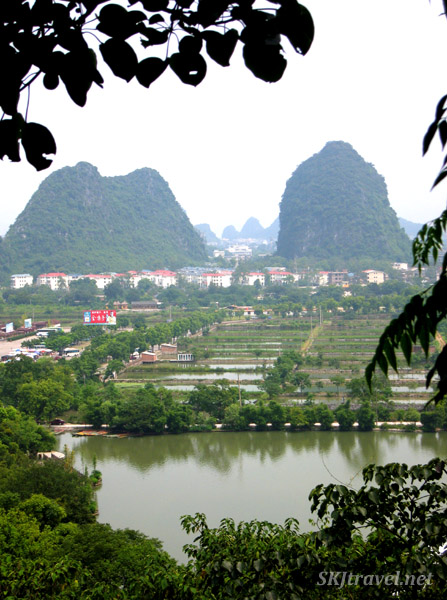 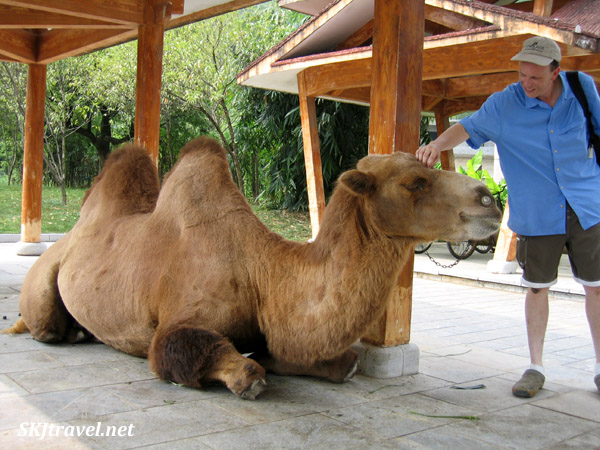 The karst topography extends below ground as well as above, and caves are a hallmark of this type of geology. So we also visited a pretty astounding cave, Reed Flute Cave, whose stalagmite and stalactite formations were very complex, giving the cave an incredible texture. The caverns had enormous, cathedral ceilings.  We had to wait to go inside until a group of 20 or 30 people had accumulated, and had to go with a guide.  When we learned this, we were disappointed, but once you're inside, they didn't seem to care if we stayed with the group or not, so we just hung out for awhile. Since all the Chinese move right along with their tour group and don't linger to look around, we simply stayed in between groups so we had the place to ourselves to take pictures and listen to the water drip onto the floor ... that was neat, feeling like we were alone in this huge cave.  There were some pools of water reflecting some of the formations. The various formations are lit with all different color lights – it's a little cheesy, but so very Chinesey.  So the rocks are lit in red, green, blue, yellow, as if they are not astounding enough in themselves ... but I guess a little disco color adds to the uniqueness of caves we've experienced around the world so far. And it admittedly does work pretty well with reflections. 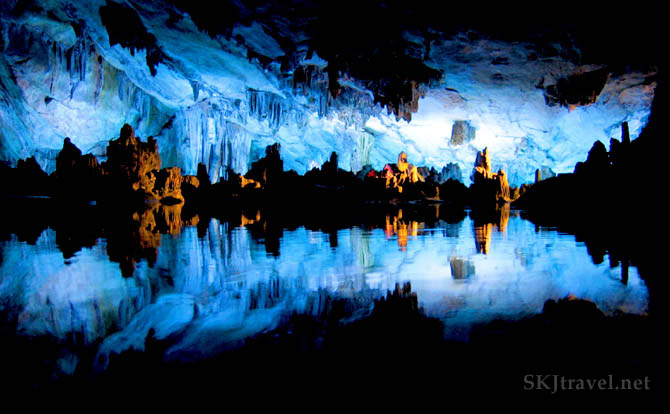 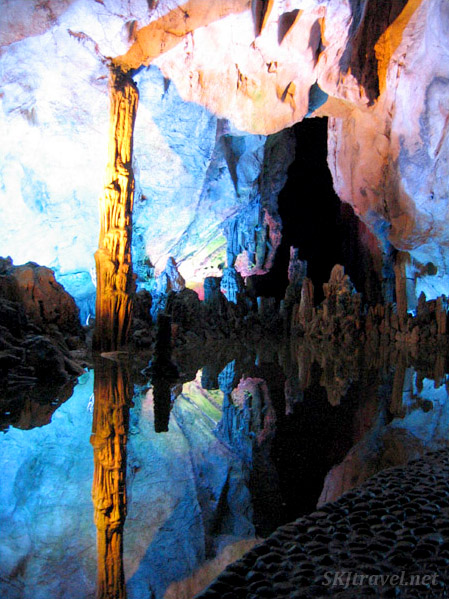 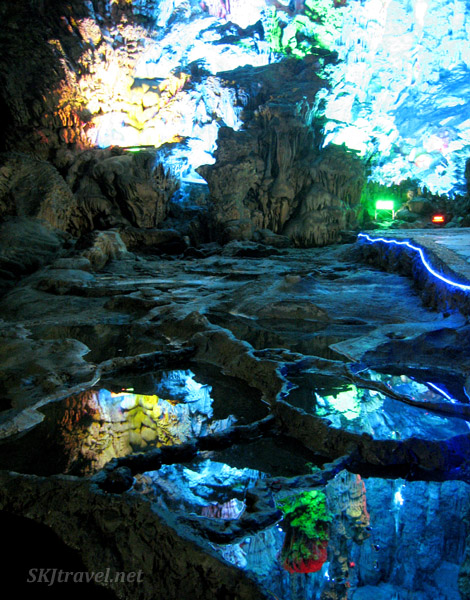 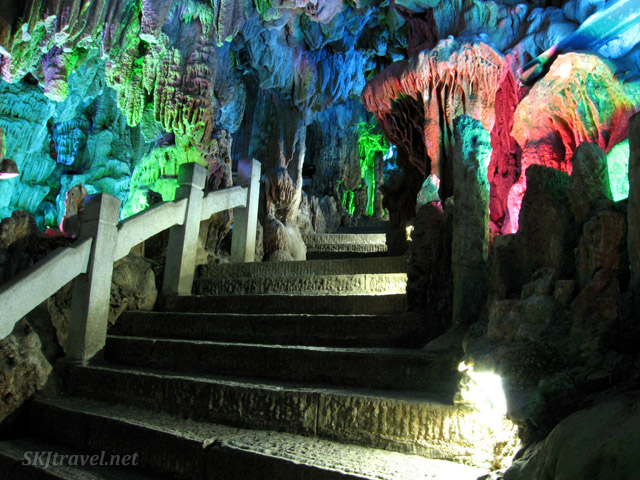 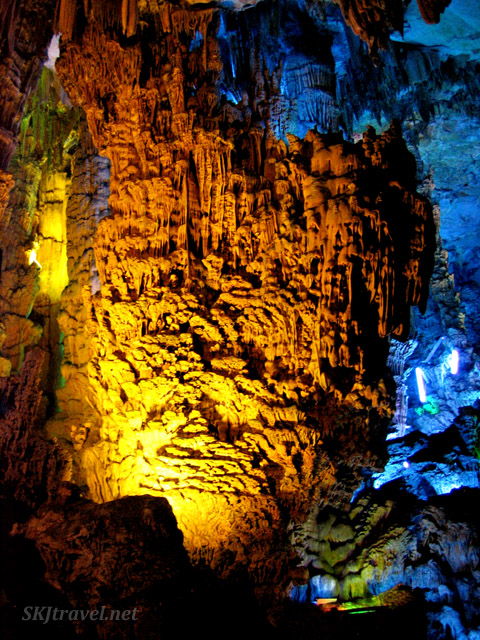 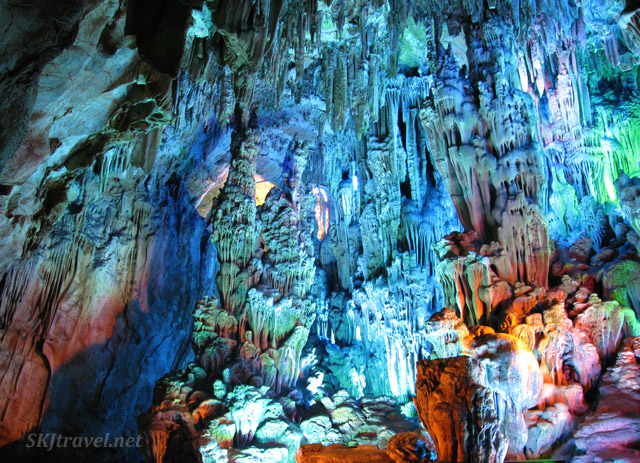 But the most remarkable thing here may be the heat.  !!  Holy watermelons, it's crazy hot.  And ridiculously humid, and the locals say it was worse last week.  I was sweating so much yesterday and my clothes were so wet, that my belt buckle started to rust where the little metal spike goes into the leather hole.  Last night we had the most authentic meal to date, I think.  Even though the menu was in “English” with pictures, we ended up with deep-fried chicken bones and pork-and-mystery-ingredient-plus-fat loaf in gravy.  Mmmmmmmm. (not) But the fried rice was outstanding (the only thing we asked for outright instead of pointing to on the menu).  It's definitely a tourist hotspot, with all kinds of souvenir booths and a pedestrian mall.  But we managed to leave with only one new item.

Guilin has some lovely parks. We putzed around for awhile in some of these. Had another occurrence where a family wanted their photo taken with us on their camera. There are some traditional cormorant fishermen/women here. But I think really they keep using this method more for the tourists to watch than anything. They put a band around the cormorant bird's neck so that it cannot swallow the fish it catches, then the fisherman takes the fish from the cormorant's mouth for his own. Seems a little cruel, poor bird ... must be so excited to have caught a fish and then can't figure out how to get it inside his tummy. 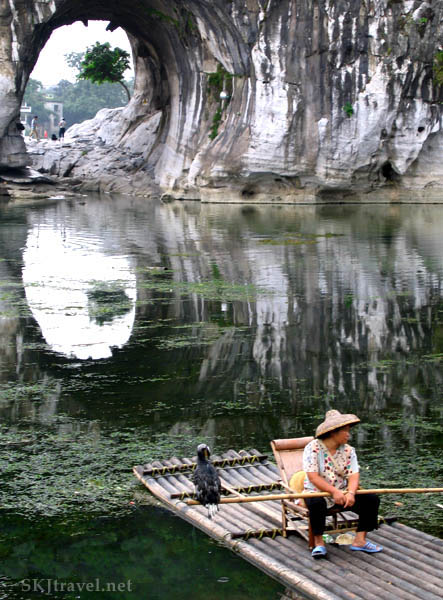 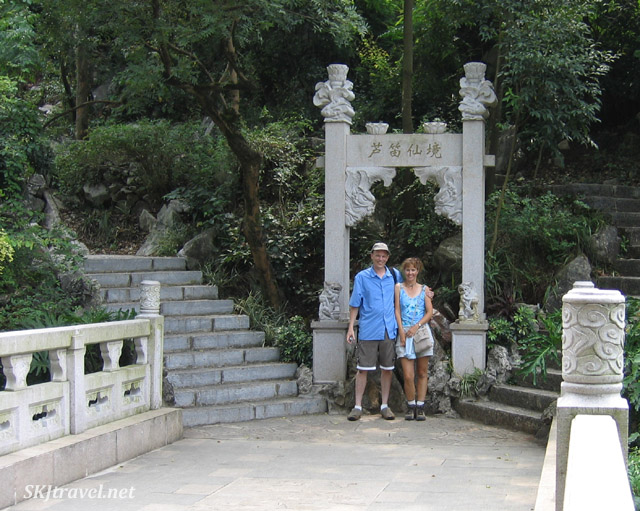 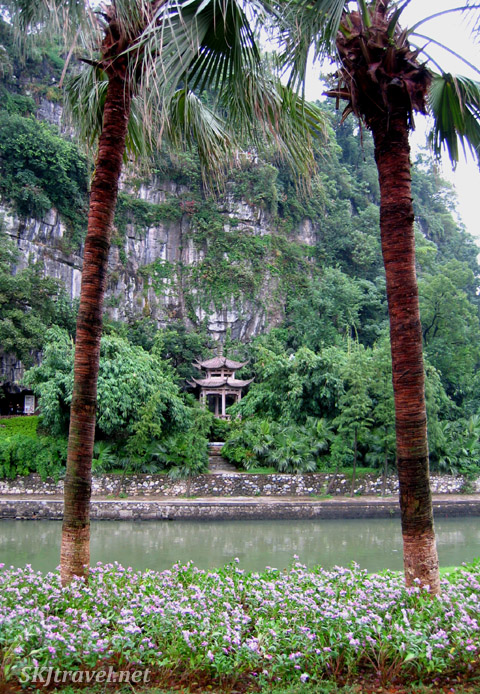 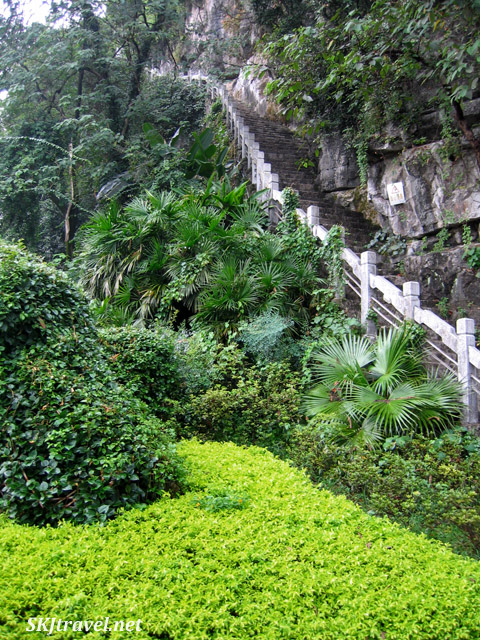 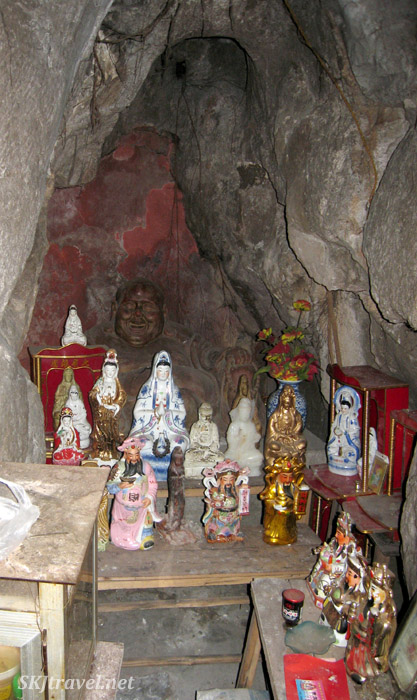 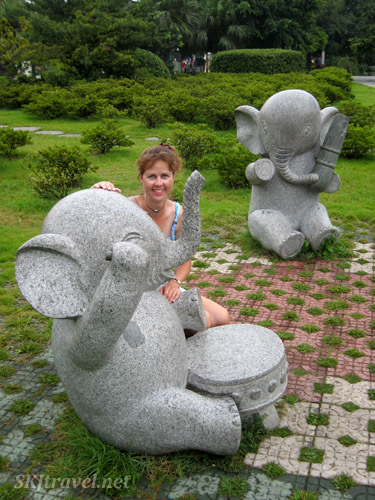 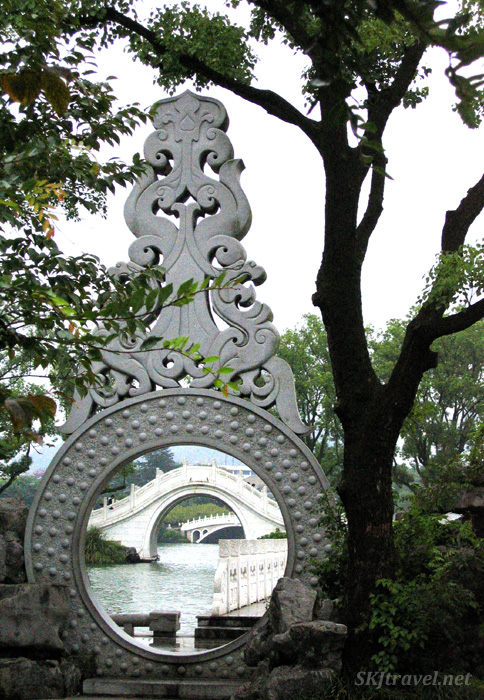 Next we will travel down the Li River to Yangshuo. Definitely a very different geography down here in Guangxi Province than where I've spent all my time so far further north. I'm happy we decided to check out another part of China. Seems a little more iconic -- the China I envisioned before I ever came.