To the Lama Temple I Attempt to Go

Well, another swell day for the most part.  Wasn't the day I had planned, really, but that's OK.  I had planned to go see the Lama Temple, Yonghe Gong, and then take this walking route that my guidebook suggested. I did in the end see the Lama Temple and I did walk an awful lot, but not where I thought I would. Things went awry when I missed my bus stop for the Temple. When the staff at the hostel here told me which bus to take, I neglected to ask about how long it would be before the stop for the Lama Temple.

I probably would have seen it out the bus window, but right around that time I got distracted by two old ladies on the bus fighting with each other over an empty seat. Not, as you might be thinking, because they each wanted the seat for themselves, but rather they each wanted the other one to have the seat. But they each refused.  So they began tugging and shoving one another, trying to push the other into the seat.  Very amusing. But then after a bit I got to thinking that I'd been on the bus quite some time and I began to suspect I missed my stop. I wanted to sit down and get my map out, but I was afraid to remove my hand from the pole which I had originally held on to when I first got on the bus. Why was this, you ask?  The grime.  (Andrea, you warned me!)  When the elderly ladies started fighting, I went to step back a bit and tried to move my hand back along the pole I was holding onto. But it was stuck to the pole with the strength of rubber glue. There was no rubber glue on the pole though, just general, sticky, people-generated grime.  I managed to detach my hand and out of necessity had to grab the pole again in another spot.  But the sensation of removing my hand from the pole was so revolting that I determined not to do it again until I got off the bus. Really, I haven't been upset by any hygienic issues except for this one.

Anyway .... so bottom line is I didn't know where I was but was pretty sure the Lama Temple was some distance behind me. There is a sign on the wall in the hostel that says, "It's fun to get lost."  I took this to heart and made an executive decision to forget the day's plans and to get off the bus at the next stop. I'd seen a sign for a hutong a little ways back, so I decided to check that out. The brilliant thing is, you can catch a taxi anywhere, and I have the name of the hostel written in Chinese characters, so if I really can't find my way, I can always pay for a taxi and go home. So I walked around aimlessly for a bit. By and by, I got to suspecting where the Lama Temple was in relation to me. I ended up walking along a canal of deep green water, beneath a corridor of weeping willow trees. Then I came across a Confucian temple that was free to enter and so I walked in. 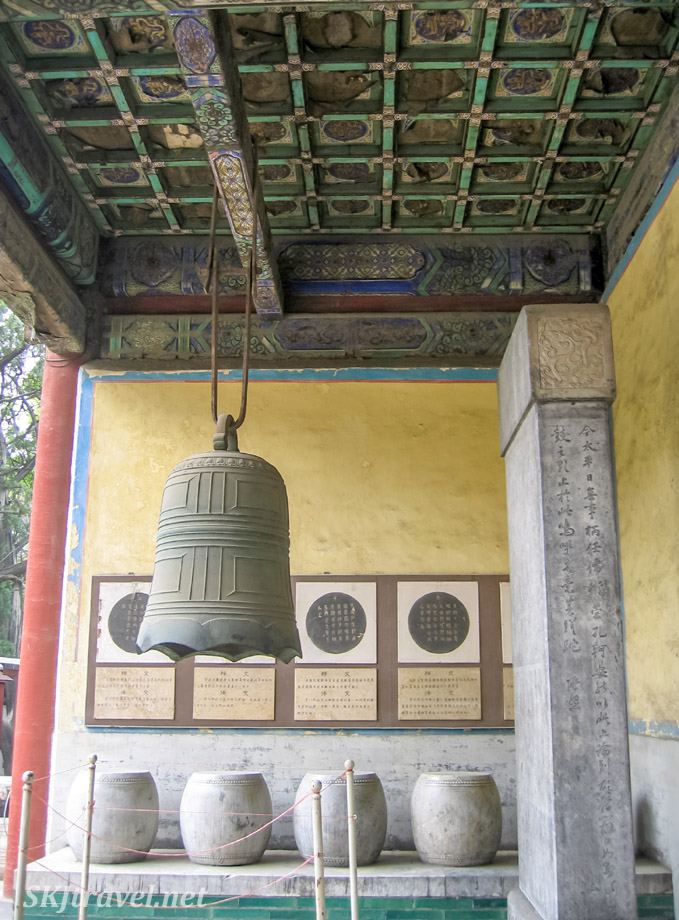 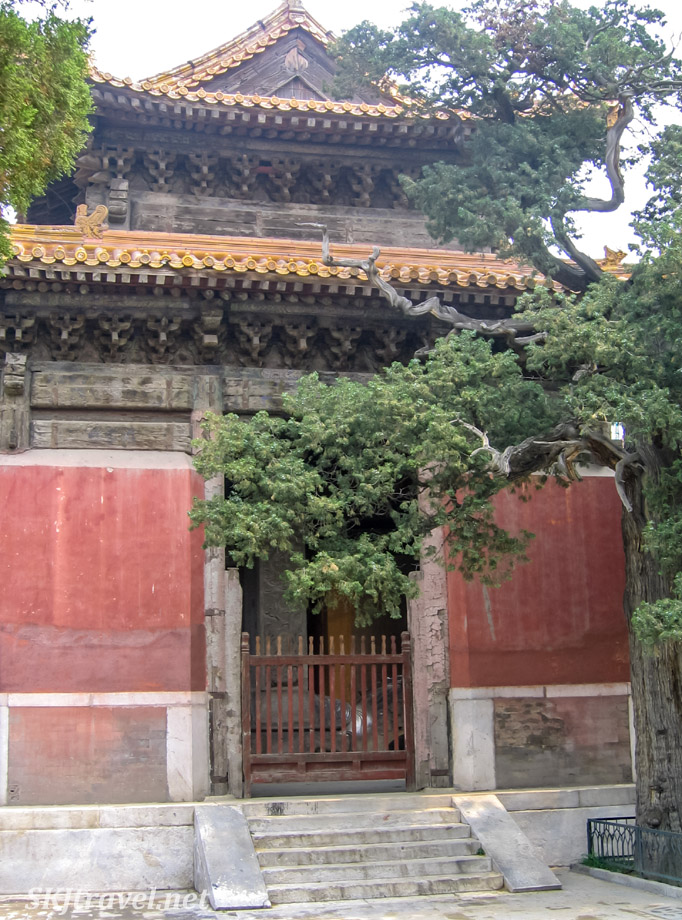 It was a lovely little complex. The buildings were not too well kept up, the paint peeling heavily, the ceiling tiles hanging down in spots. But it was incredibly peaceful. The courtyard was full of gnarled trees that were 600 and 700 years old. 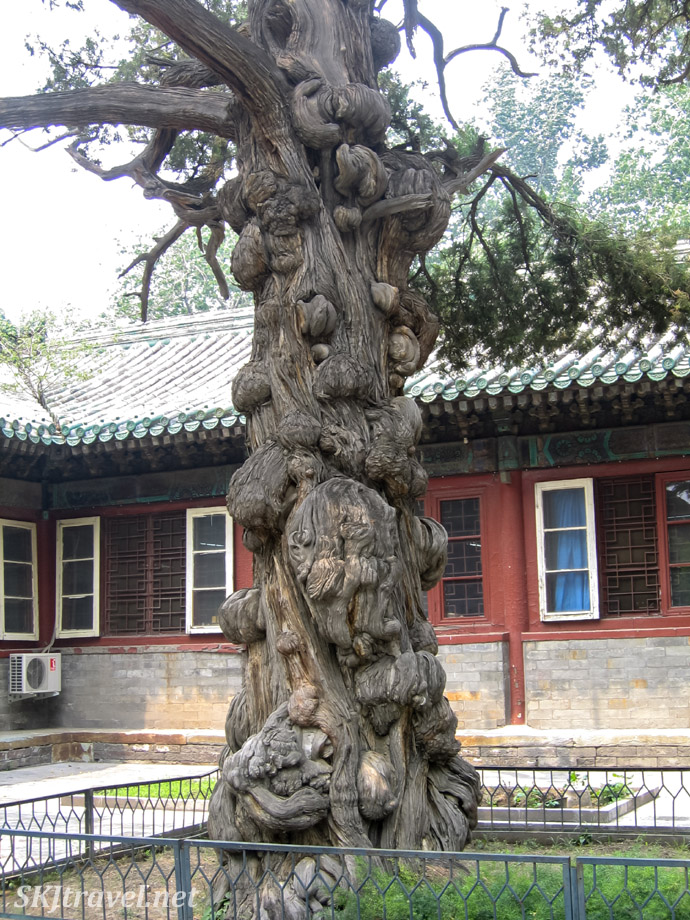 In one of the side temples, which was open to the air, a girl was playing some sort of instrument I'd never heard/seen before. It looks like she's blowing into a mini set of organ pipes. So this strange, but not unpleasant, music wafted through the courtyard. You can just see her behind the red pickets. 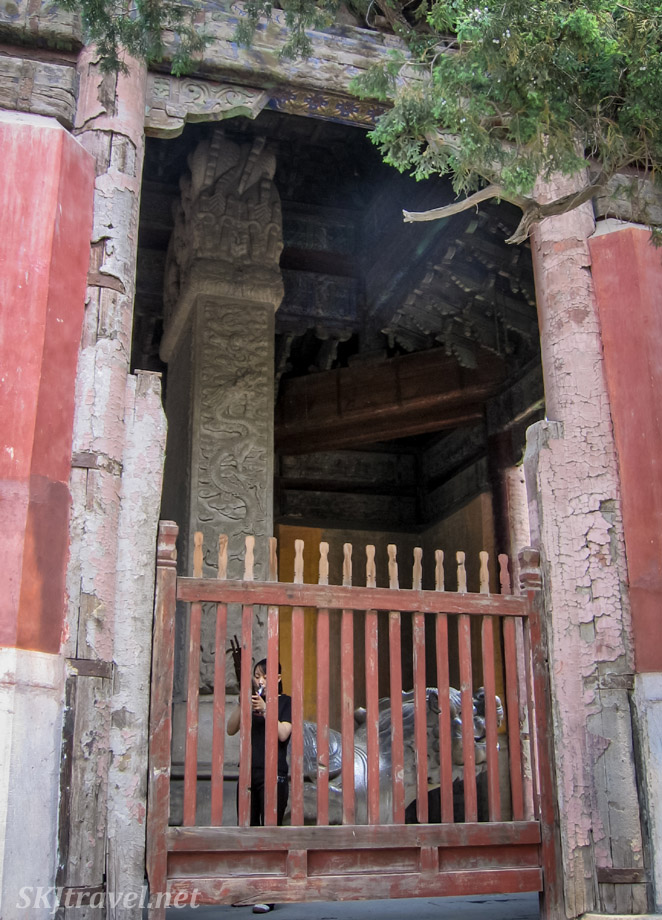 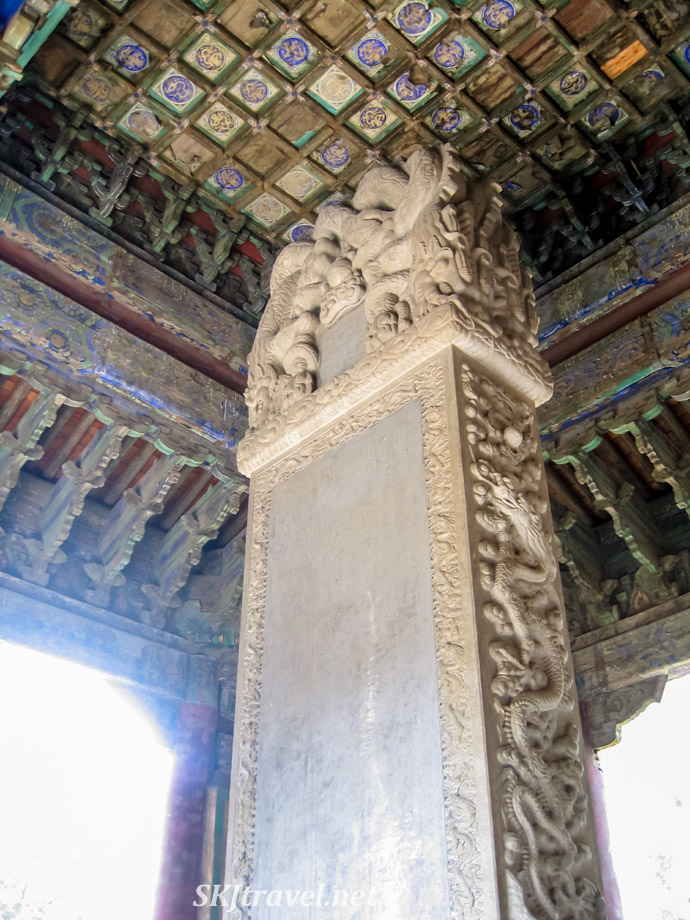 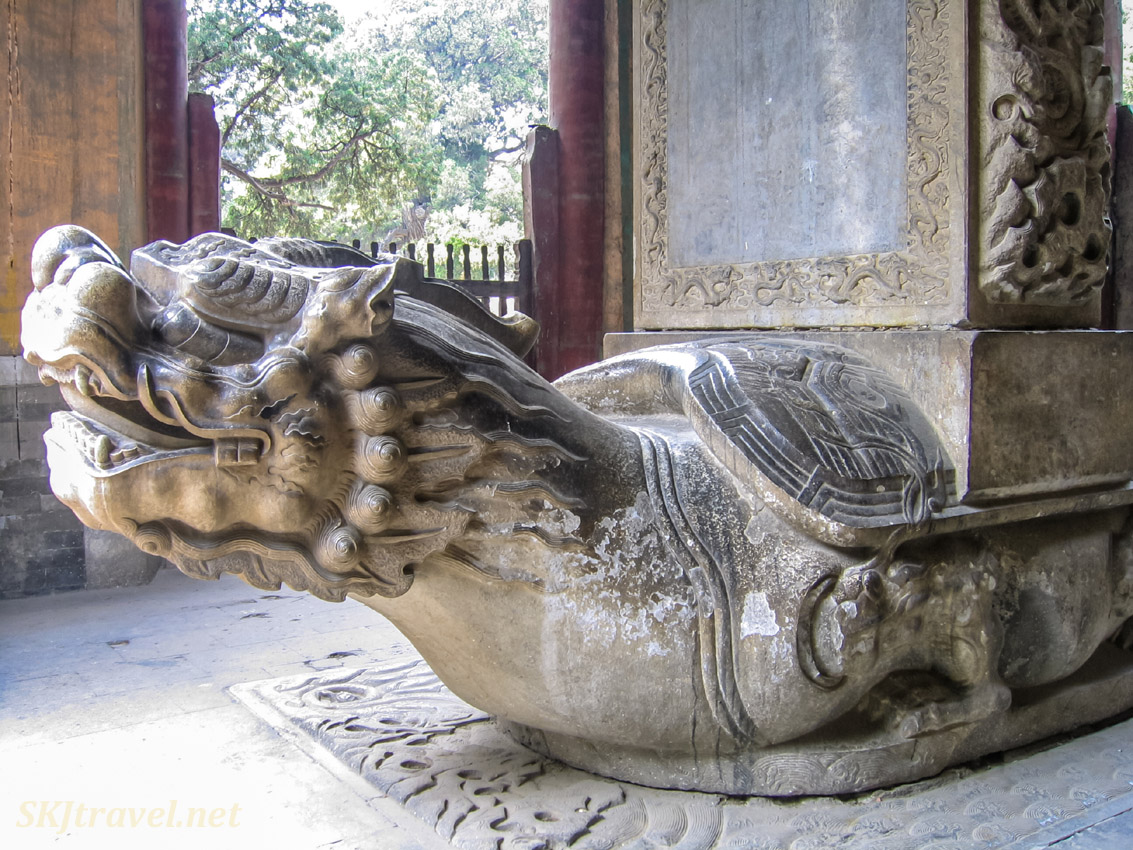 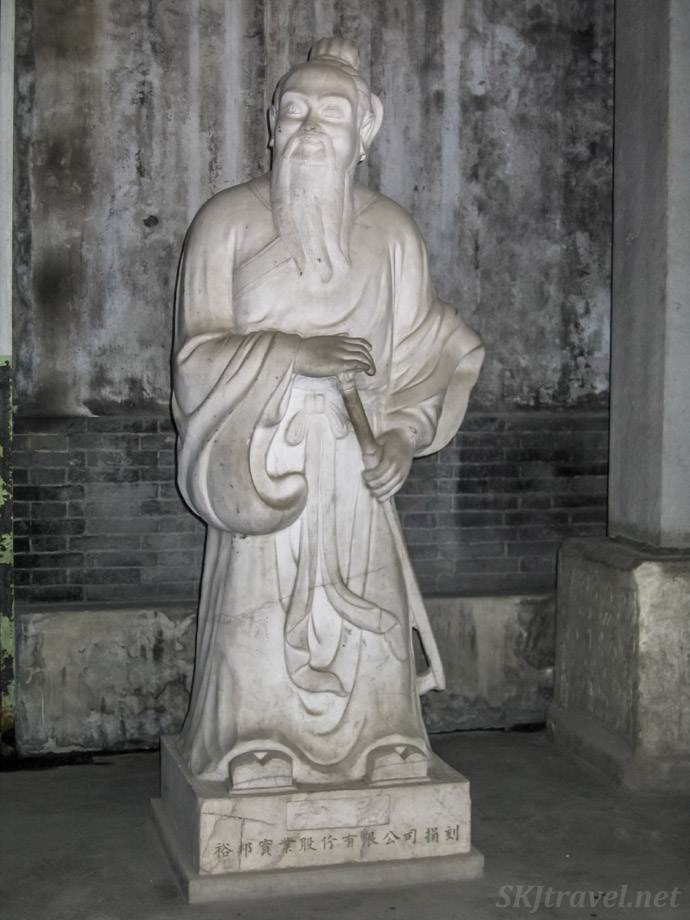 Then I had a successful encounter with lunch (language-wise, that is to say). And then I got to the Lama Temple after all.

When recently looking through my dad's slides of China, he had some of the inside of the Lama Temple which he had apparently purchased at a souvenir shop. (it is forbidden to take photographs inside the temples) After seeing those slides, I put this on my list of things to see while in Beijing. (The guidebook also happened to highly recommend it.) I had wanted to try to see additional sights today, but once I entered the grounds, I just let all that go. 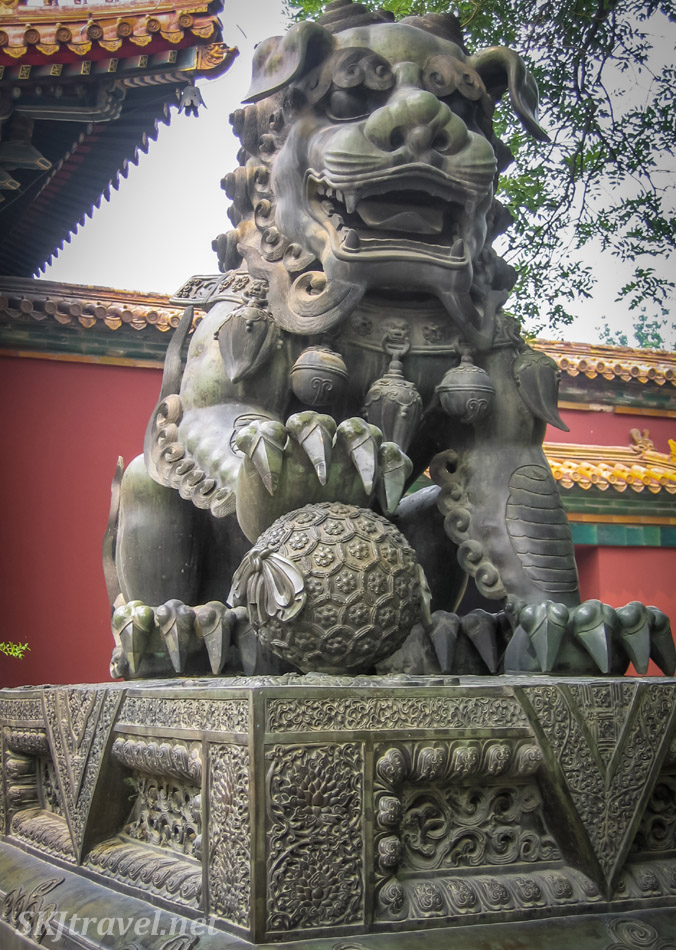 I spent the whole rest of the afternoon at the temple. I LOVED it. The buildings are beautiful on the outside and the Buddhas and statues inside all the temples are beautiful. This is an active monastery, so at all of the little temples in the complex, people were paying homage to Buddha, burning incense, leaving offerings and doing a series of bows and kowtows on their knees. There are huge iron fire "boxes" outside each temple for people to light their incense in and leave it burning. There is so much incense ash and offerings of fruits and other items left around the boxes that the monks come by fairly continually to collect the offerings up into large bags and cart away piles of smoldering ashes from the fire boxes in large wheelbarrows. 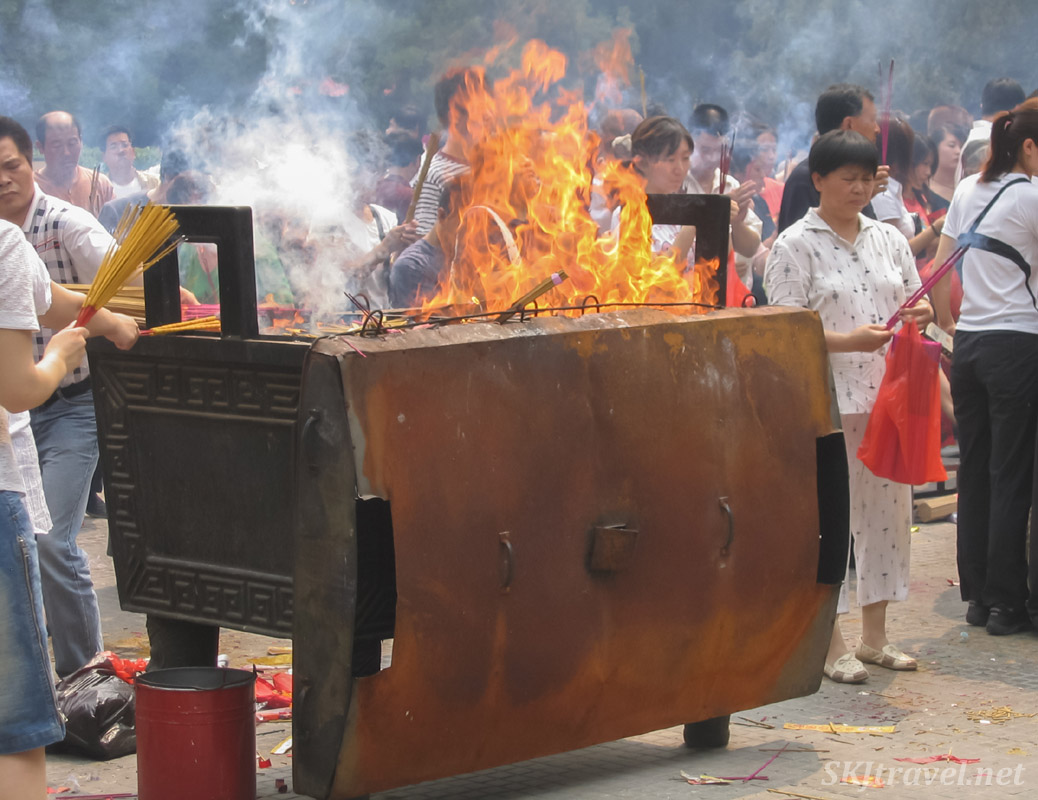 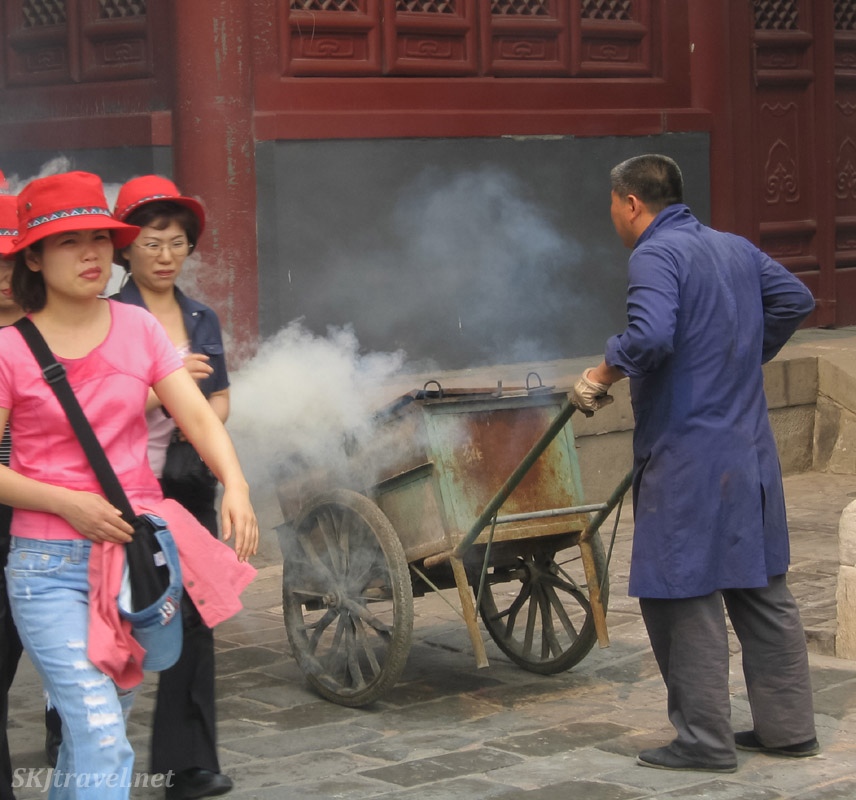 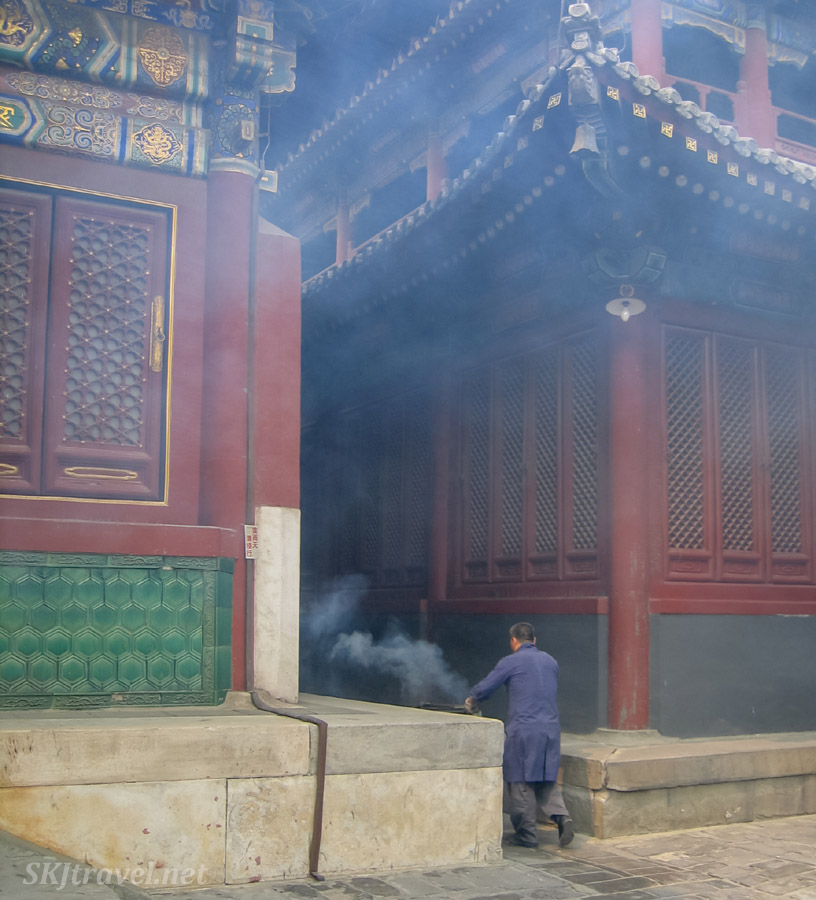 As you travel deeper into the complex, the temples get progressively larger, and they shelter ever bigger and more elaborate Buddhas. The second-to-last temple has a huge sitting Buddha. 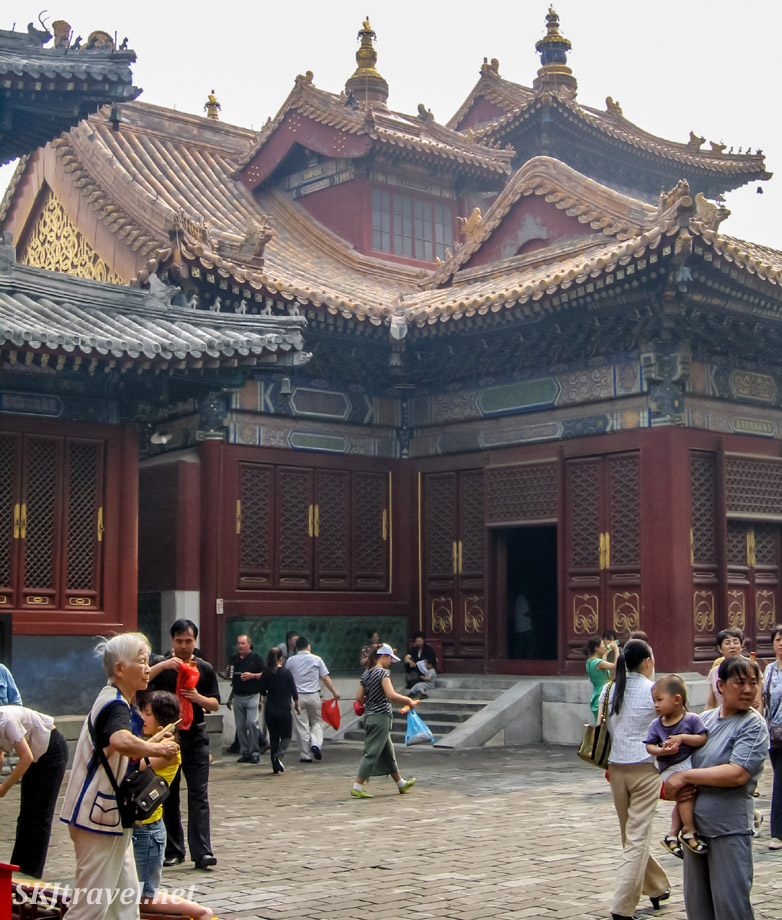 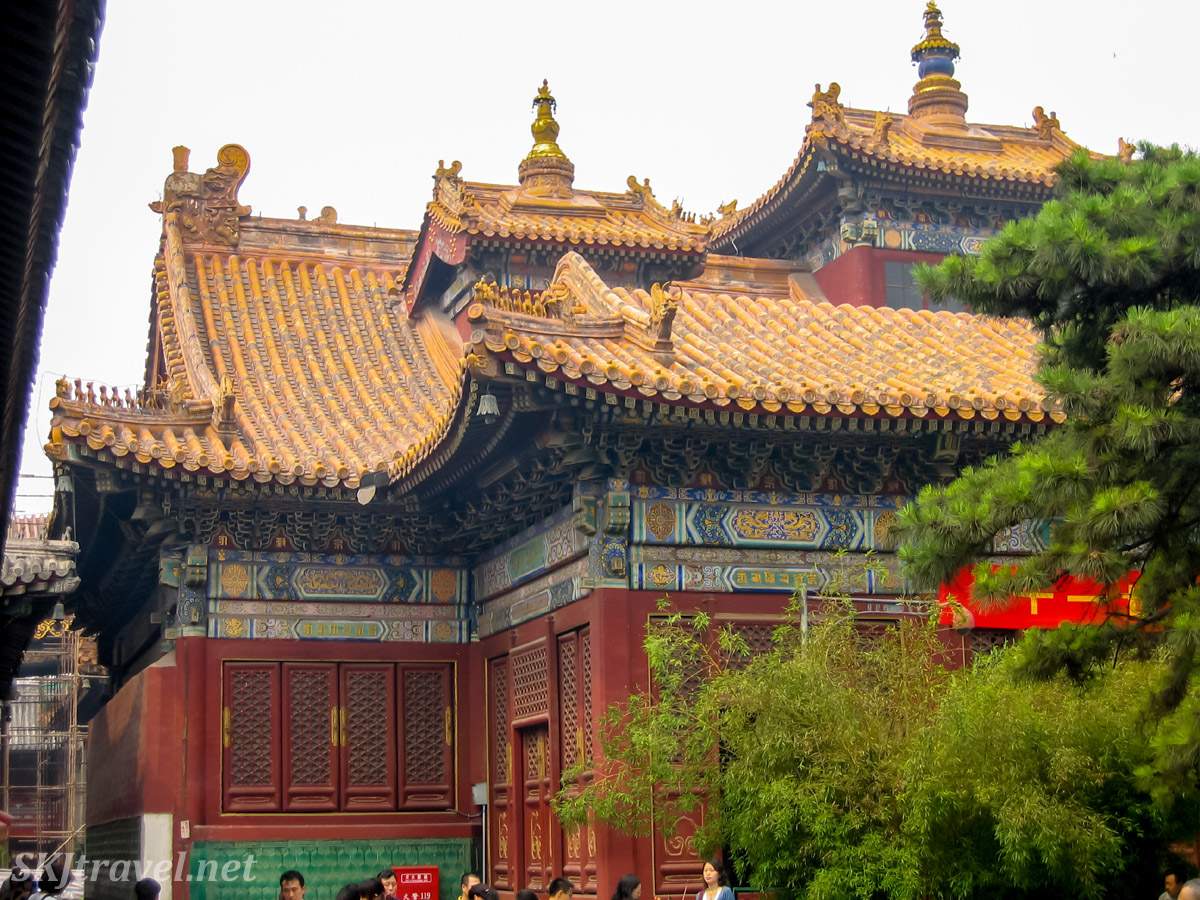 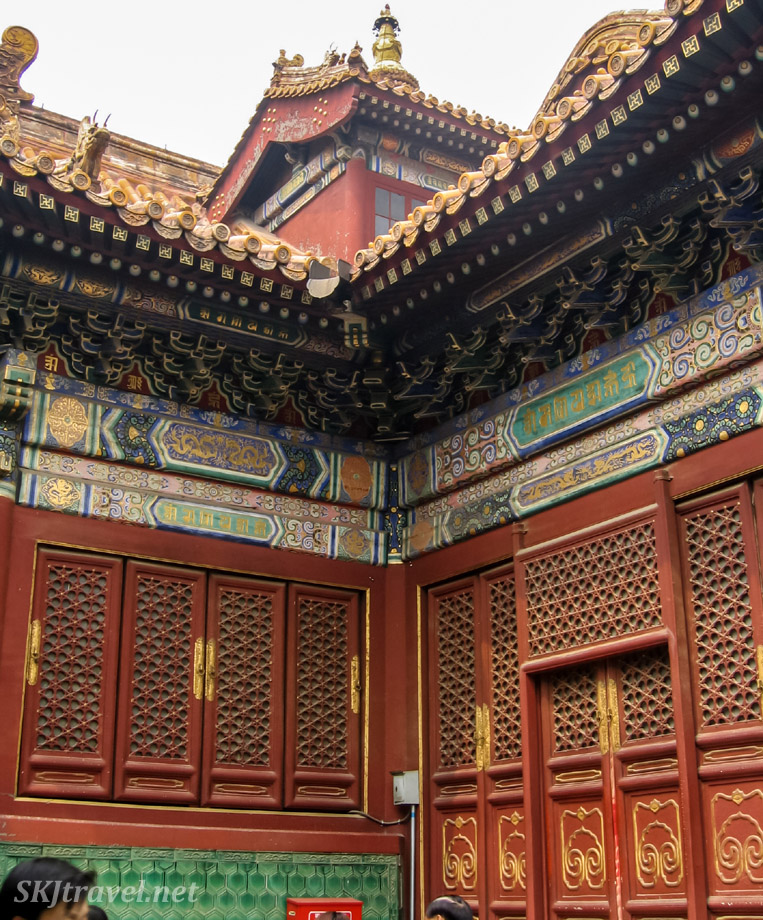 There are long carpeted benches along both sides of him for the monks to sit on when they're "in session." The ceiling is so gorgeous the way it's painted, with dark red and blue and green, and the geometric designs are outlined in gold. I don't know exactly what the gold is, it doesn't seem like paint because it sticks out from the painted surface. It's kind of like the ceiling is a mammoth Fabergé egg. And then there are parts of the ceiling that are popped up a bit higher and from which hang huge fabric banners – most of them are round (like a lamp shade or something), and very long tassels dangle down from the sides of the banners. The shiny golden Buddha sits in the middle of all these huge, colorful banners and ceiling of deep dark colors, and a breeze was blowing through the temple, so the banners were all swaying in the wind. Magical.

The furthest temple in the monastery shelters an enormous standing Buddha. I had no idea that was going to be the case, and was dumb-struck when I walked into the temple, looked up and beheld a fifty-foot tall Buddha. The ceiling of the temple is low until just before the Buddha, so you cannot look up at it from afar, you have to stand directly beneath it and crane your neck to see the top.  It's quite astounding. Later I would learn this Buddha was carved out of a single sandalwood tree. It happened that today a number of very elderly Tibetan monks were praying in the temple. 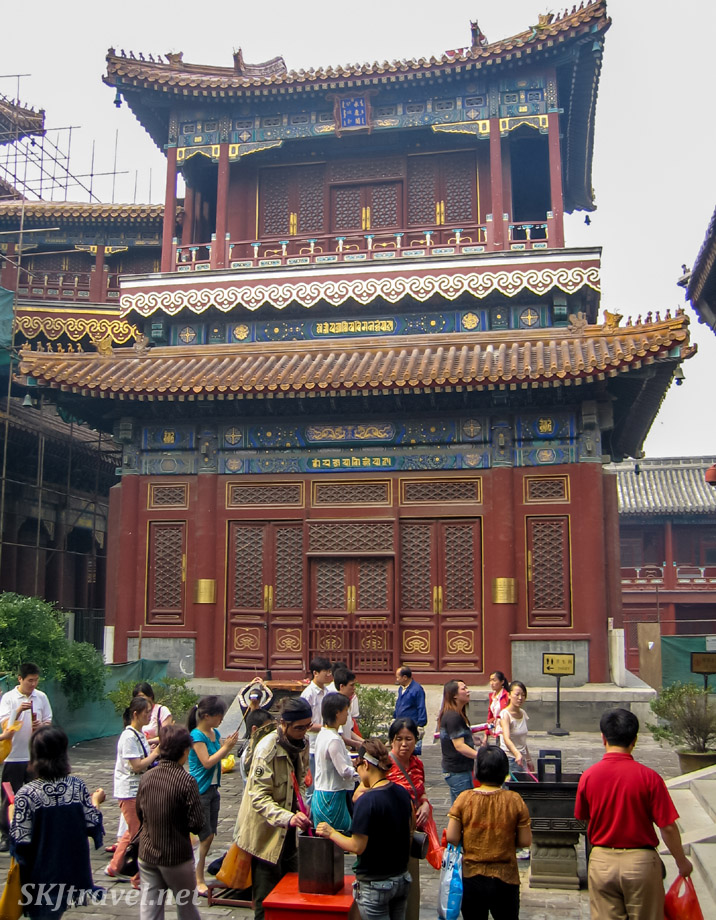 Now this may seem like a silly thing to be a "special moment," but I found it to be one anyway:  After I left the gigantico Buddha, I was inside one of the other smaller temples, standing kind of back in a corner behind throngs of incense-wielding, bowing Chinese people, when one of the elderly Tibetan monks entered the temple, waded through the crowd of people and came straight up to me and said "hello," in English, with a wide and gracious smile. I just about melted – he was somehow exuding kindness, happiness and peace, and I looked him in the eyes and replied "hello." He smiled a deep smile. I bowed a little and then moved to the side so he could keep walking. I just felt special because he didn't speak to anyone else.

Later there was a particularly elderly monk being escorted through the complex. At one point he stopped beneath a tree and two monks came running up with a folding chair, opened it and helped him sit down. He sat under the tree for awhile. A very simple scene that amused me.

Then I had another bit of an "adventure" trying to get back home on a bus with a mean bus driver, only that adventure wasn't quite so fun because after awhile my feet were killing me with all the walking. The adventure finally came to an end when I met someone with one of those GPS street-finder dealy things who spoke English and sent me in the right direction.  So alas, I sit here typing what is for all intents and purposes today's journal entry for me (I'm emailing these to myself as well!) I've decided to stay in tonight and rest up.  My legs and feet are really beat from the last three days of heavy use.

But it was oh so very worth every step of it.