I don't know what that title means ... just sounded like a fun jingle, like a hip-hop song, or seven Chinese dwarfs going to work in the mine. :) So I successfully arrived in Xi'an.  I got kind of a late start here, because after I got off the train and checked into the hotel, I badly needed a shower and to buy a map of the city and figure out what to do.  I headed first to the Shaanxi Province Museum and the Forest of Stone Steles.  The museum had some marvelous stone statues of exquisitely-dressed people carved in the AD 500s and 600s.  Also huge tigers, lions, and rhinoceros, and Buddhist art pieces all done in the AD  500s to 800s.  They were amazing (even despite being coated in tourist fingerprints).  One thing I found really interesting was that they often noted where and when the piece was unearthed.  Most pieces were discovered while building apartments and factories and airports in the 1970s and 1980s.  That fascinates me, that these incredible pieces of art are lurking just under the surface, that history is stacked up everywhere, and it's not just midden heaps that get interred into the soil and buried in time. Magnificent expressions of human artistry and religious symbolism get buried, simply buried, simply lying in the dirt, supporting our feet on their heads, capable of resurrection at any time.

There was also a nice exhibit of paper puppets like I'm sure you've seen in Chinese puppet theater.  Wow, those are amazing also.  The museum is housed in an old Confucian temple, so the grounds are very nice.  The forest of stone steles is just the museum's collection of I-forget-how-many stone tablets inscribed with calligraphy.  They are works of poetry, of history, of religious teachings, of all kinds of subjects.  And by tablets I mean anything from 2 feet high to 12 feet high.  Most of them are quite tall.  Of course, I can't read the writing, but they are pretty anyway, and just seeing the sheer numbers of them is impressive.  So you know how I love museums ...  I spent a lot of time there. 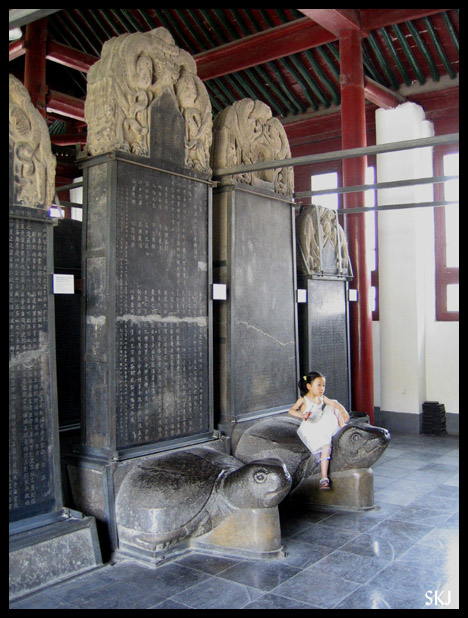 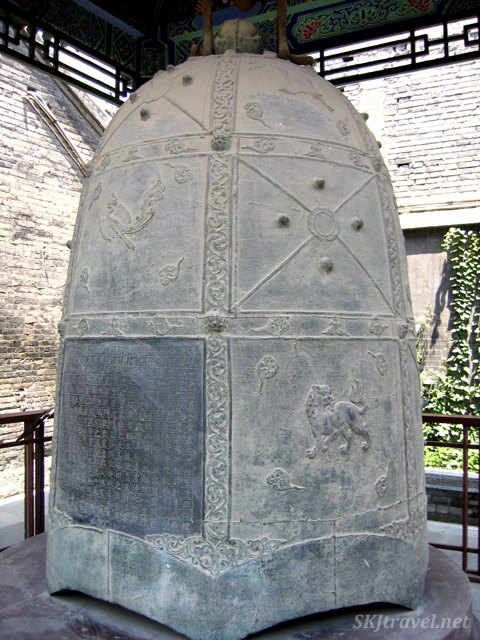 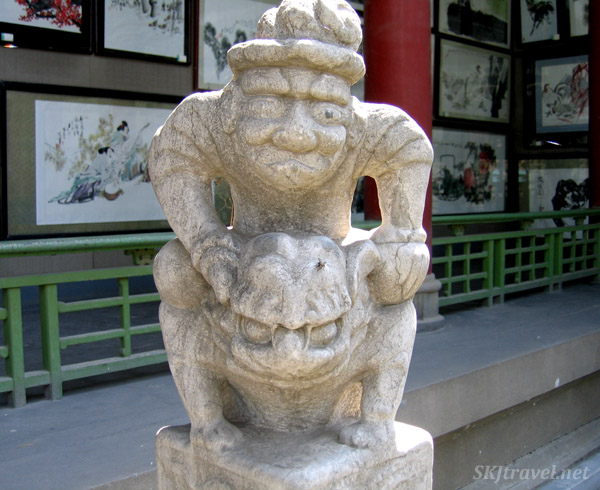 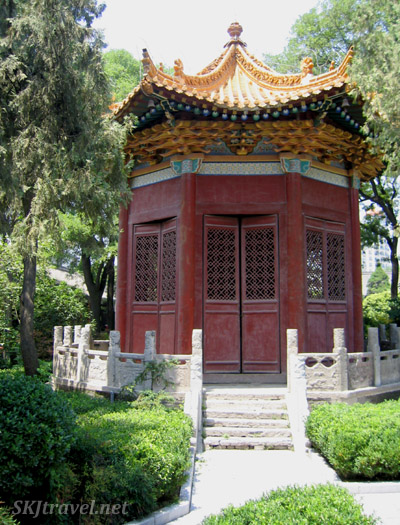 There is a large souvenir market next to the museum, so I went perusing.  The bargaining is a little different here than in Guatemala (where I first learned the ”art”).  The vendors here will not follow you down to the death.  Perhaps there are enough tourists that they have some leverage.  I actually lost an item that I really wanted because I refused to pay more than half of her original price (it was a high original price and I was buying more than one item).  I'm quite sure I wasn't being stingy, because I bought some other things in the market at about 30% of the price first quoted to me.  But oh well.  There are actually lots of souvenir markets around here; hopefully I will find the piece somewhere else (or if I go back in two days, she probably won't remember me).

By the time I left the market, it was dinner time, so I went back to the hotel to drop of the purchases I made.  Then I went out to try to find the Great Mosque, knowing it was too late to go inside, but I could at least see the outside.  The city map I bought is fairly useless, it turns out.  It only shows a dot in the vague area of a site and nowhere in the descriptions of each of the tourist sites does it give the actual address.  So ...  I just headed off in the direction of the Mosque.  (By the way, Erik, your suggestion [nay, insistence] that I take your little pocket compass was SUCH an excellent one.  I use it all the time to either verify my direction or more often, figure it out.  It's been so incredibly useful.)  I did not, alas, find the Mosque (it's supposed to be huge, I don't know how I missed it), but no worry.  I had a fabulous time wandering through the Muslim quarter, a mix of Chinese and Muslim cultures, dresses and foods.  Here I saw the most interesting cooking stalls.  Huge, absolutely huge, vats of soup being stirred with enormous spoons, and gargantuan skillets of noodles being fried or steamed.  There are various kinds of cooking appliances I don't have any idea what they are or what they do, sitting around everywhere.  People cook over these fire-breathing stove things, where fire shoots out of no less than 4 different holes around the stove while they stir a huge pot on top.  It was terribly interesting.  Tables-full of mounds of spices that smelled delicious, and tables of nuts and seeds and dried fruits and bamboo-leaf packets, and lots of chicken feet for sale.  I just love walking around that kind of stuff.  People obviously thought I was some kind of nincompoop for taking photos of some of the things I did ... "Why is she taking a picture of a stove???"  Actually I didn't take very many pictures precisely because of that reason, I felt self-conscious.  But oh, how interesting these streets were.  I had a marvelous time.  I never ran into a single Westerner, either. 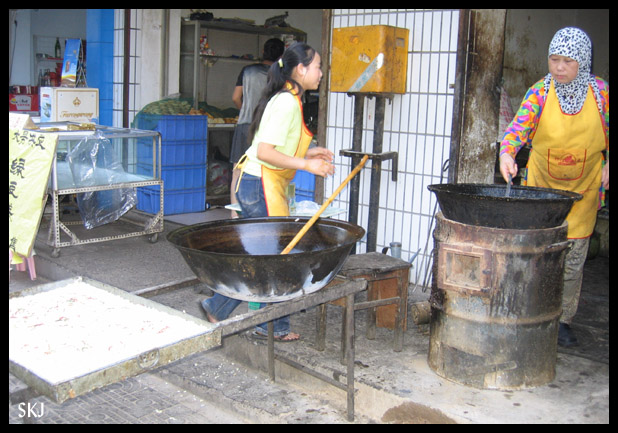 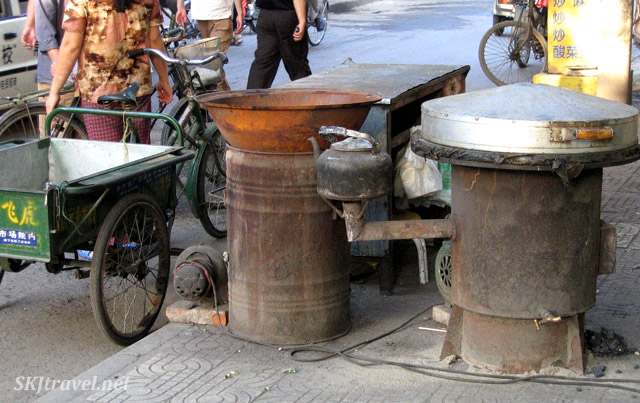 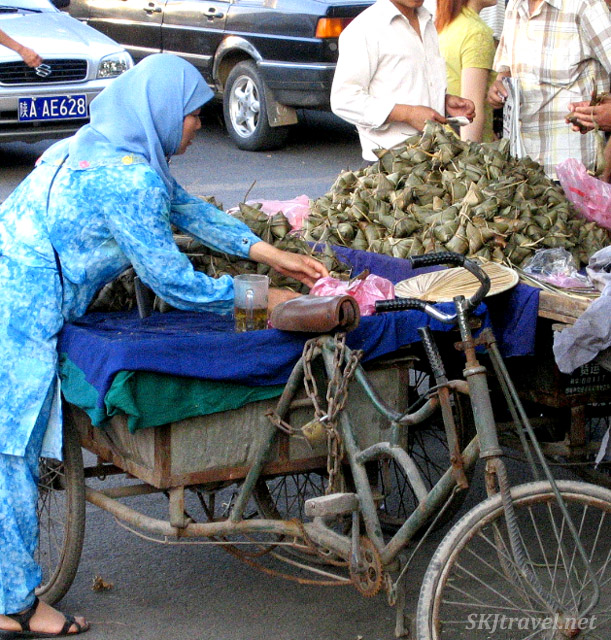 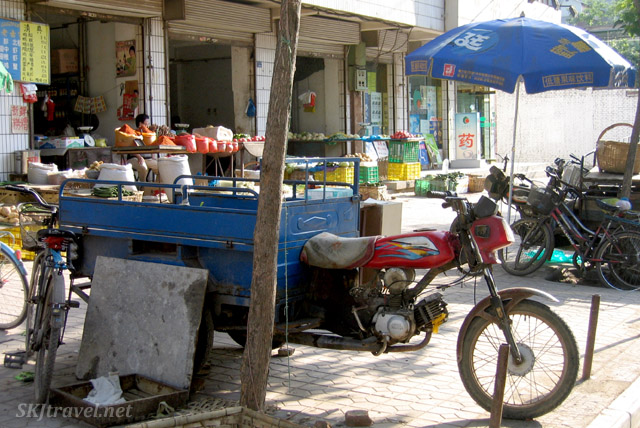 As dusk descended, I ran across a sweet little park with a swamp full of water lilies and tall grasses, with a stone path threaded through it. It was kind of magical walking on the stones. I felt like a little kid in a storybook land. The city center, where the Drum Tower and Bell Tower are, is quite a light show at night. 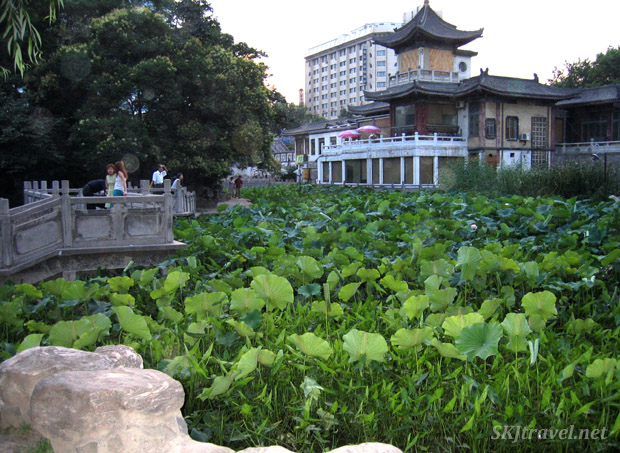 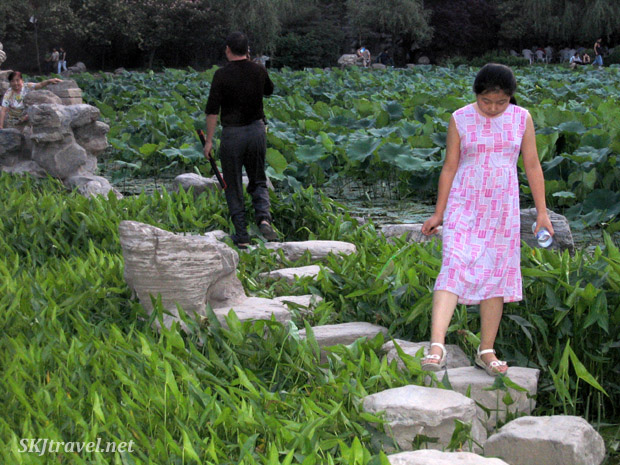 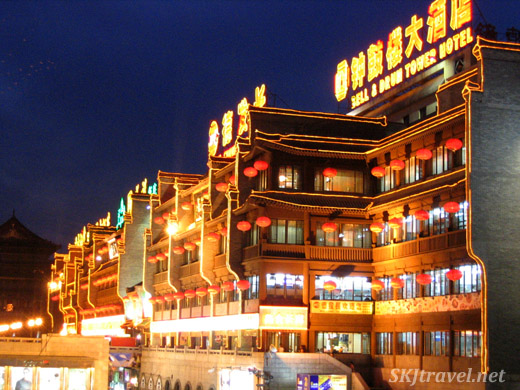 So now I'm here in the hotel, and the AC in this computer room is cranked and my fingers are nearly numb.  So I shall retire to my room to try the strange little food items I bought along the street.  Perhaps these are the sweet things my Mandarin tutor, Tao, told me I would find here in Xi'an.  I didn't see anything like them in Beijing.  The vendor thought it was hilarious that I bought only two little pieces instead of a whole box of them.  Wish me luck! :)