I've had the most astounding last couple of days.  But in this town of 3 million people, Yulin City, there are 0 internet cafes, and I am using the Head of the Department of Culture's personal computer with such slow speed I don't even have time to read your emails.  I can't even express how cool my experiences have been the past few days!  My last day in Xi'an, I climbed Huashan, a holy Taoist mountain. Very, very nice. Stunning landscape. Lots of lover's locks, pictured below ... if you and your sweetheart lock a padlock onto the cable, as long as the lock remains in place your love for each other will remain in tact. It's a somewhat common practice around the world, but this is by far the most beautiful location I've seen this romantic sentiment placed into the wind for the universe to judge. 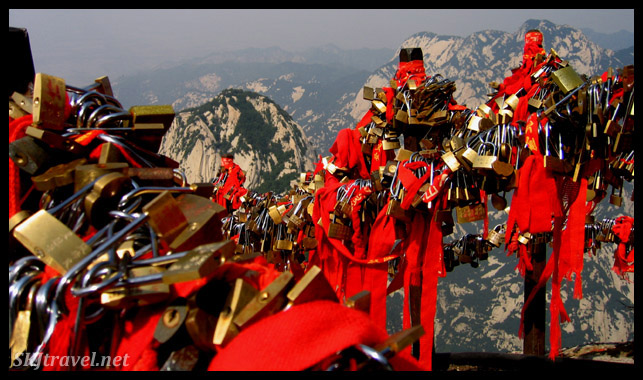 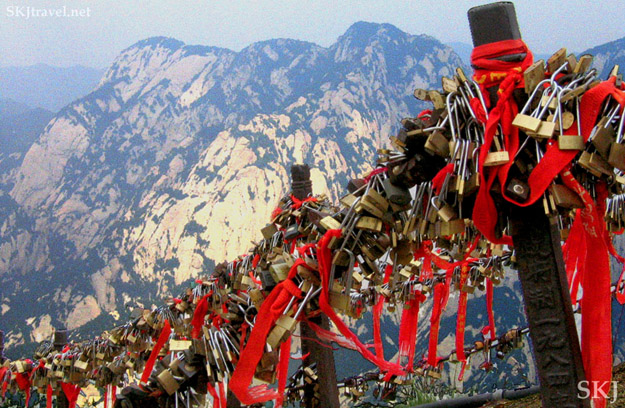 In spite of the throngs of Chinese climbing Huashan and them yelling from every possible overlook, I found a spot all to myself with a splendid view of that mountain range in which to eat my packed lunch. The Chinese love to yell as loud as they can from the mountains (they did this at the Great Wall, too). It's strange, funny, and annoying. I saw some kitties on a leash at the mountain! Huashan means Flower (hua) Mountain (shan); it has five peaks that are said to be arranged in the shape of a lotus flower. It's one of the five holy Taoist mountain and a few Taoist monks still live there amid the daytime yelling. I saw some in their little black suits which are very cute. 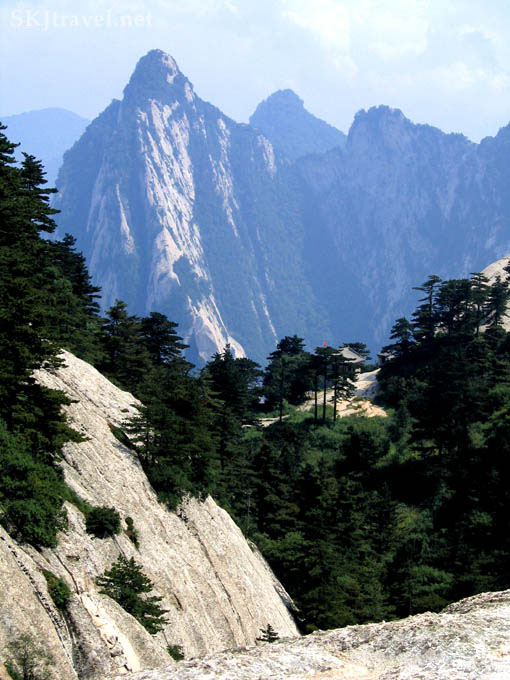 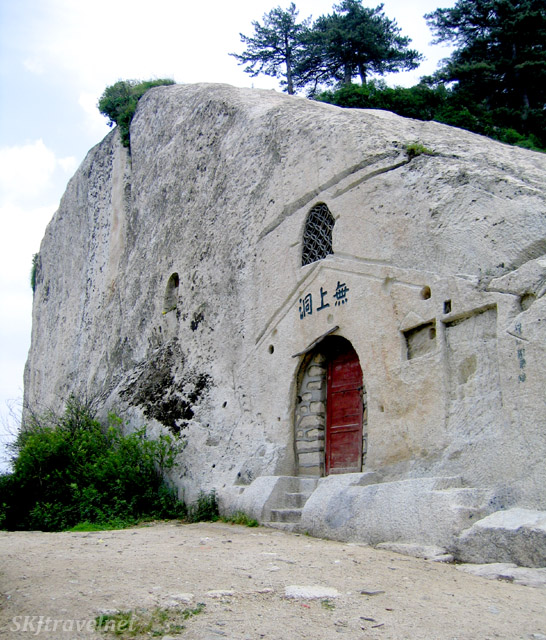 There are some rather harrowing portions of the trail which sometimes consists of stairs and metal walkways bolted into the mountain rock. (Similar to the way the trails sometimes were in Slovensky Raj, Slovakia, which I visited later, see pictures HERE.) At one point I ran across a man and his friend "stuck" on a walkway which hangs over thousands of feet of nothingness clinging to the cliffside. The one man had become paralyzed with fear and couldn't move. His friend was trying desperately to get him to walk back. Finally, the frightened man put his hands over his eyes and his friend carefully led him by the hand baby step by baby step back down to a "normal" pathway. Poor guy.

Parts of the trail, as in the photo below, are a bit like Angel's Landing in Zion National Park in Utah, but there, only "hikers" go, all prepared with hiking boots and water bottles as though it's a big undertaking. Here, most of the people were just regular Chinese city folk or rural peasants dressed in polyester pants and blouses, I saw women walking up and down the mountain in little open-toed sandals with nylon stockings. Nobody had any water. I looked ridiculous with my clunky hiking shoes and camelback as a day pack. People must have thought I was preparing to hike all the way to Mongolia. 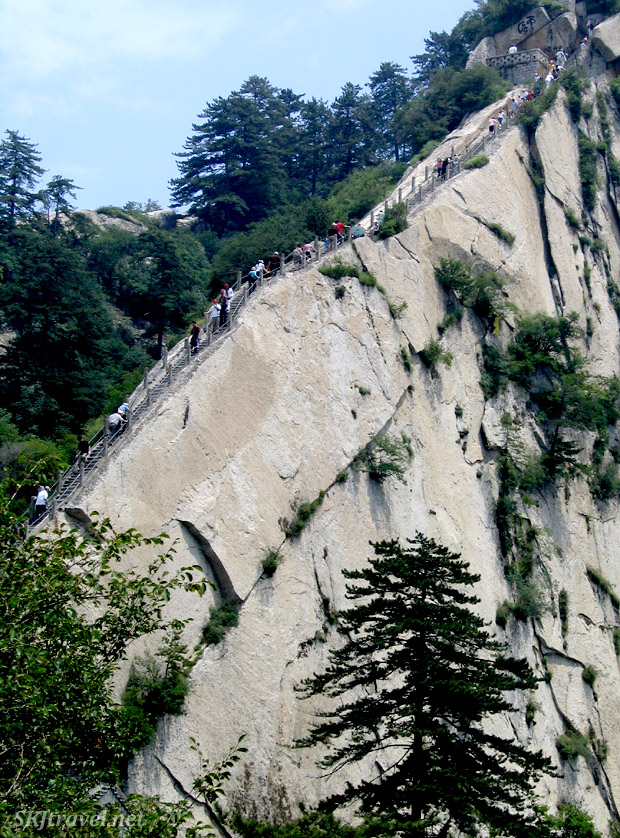 On the bus ride home, we saw the charred and smoldering remains of another bus that had caught on fire on the highway. Yikes.

Now here with the Earthwatch expedition in Yulin, we are treated like royalty and have had meetings and meals every day with the governor's delegates and the heads of all the government departments.  Today two very famous folk singers of the northern region are in the hotel we're staying in and came to give us a private performance of Chinese folk songs. Unbelievable, their voices ... the strength, tone and versatility. But especially the power behind them. I might be deaf, for the soprano lady was standing directly behind me. The hotel, by the way, is the best in Yulin City, supposedly, and is the divest dive I've ever seen! ha ha.

Last night we had dinner with some of the government officials and were inducted into the Chinese drinking culture.  We had to do a group shot, and then each of the officials came around to each of us and we had to personally cheers and drink a shot with each official.  Fortunately they were only about 1/2 shots or it would have been very ugly. Actually some of our group had to quit, but three of us made all the drinks and the Chinese clapped vigorously for us after each shot. 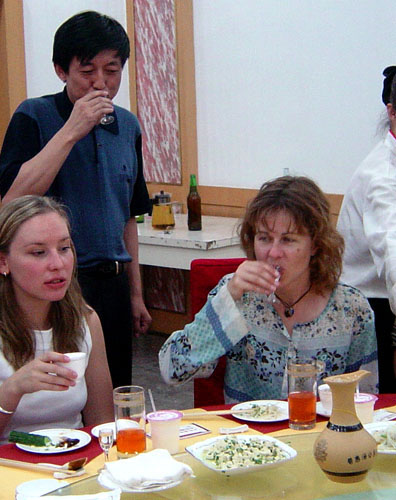 There are some lovely sights in and around the city, including these caves and calligraphy carvings in a sandstone cliff, Hong Xi Xia, dating from the 16th through the 20th century. The caves or niches contain mostly Buddhas and Buddhist statues and iconography. 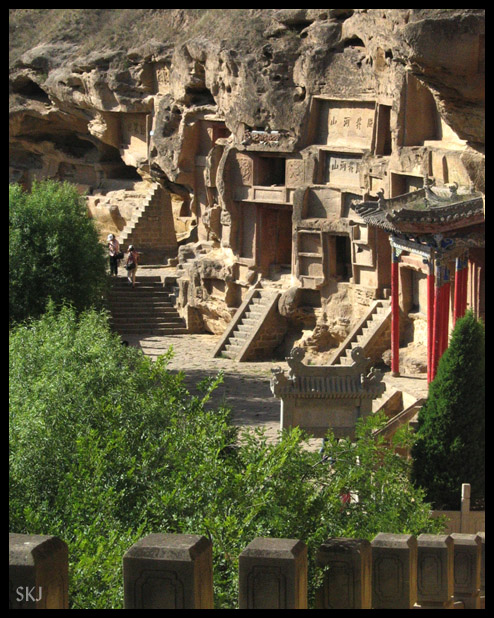 Today we walked through the city to see some sites, and all of the people just swarmed around us – we will be local dinner conversation for awhile.  Everyone was so friendly and all the school children wanted to try to speak to us in English.  People were so thrilled and honored if we took their picture. The other volunteers of the expedition are brilliant as are the principal investigators, and I think we will have an excellent time together. The principal investigator, Anrong, is the happiest person on earth, I think. He's like Happy Smurf always smiling and giggling.

Oh yeah, and I'm on Chinese television and in the newspaper, as they had reporters at this morning's meeting with the officials.

I'm so excited to get to the village (we will drive there tomorrow; the village is about 3 hours away).  We also have been to a traditional Chinese medicine place where the "doctor" takes your pulses and then gives you a prescription and there are bulk bins of all kinds of way-weird-looking stuff. It may be two weeks before I can check email again.  We'll go to another city in about 5 days, but it's probably smaller than this one.

OK. Everyone else is waiting here at this guy's personal computer to get to use their email too. Some pics below from walking around Yulin. Zaijian. 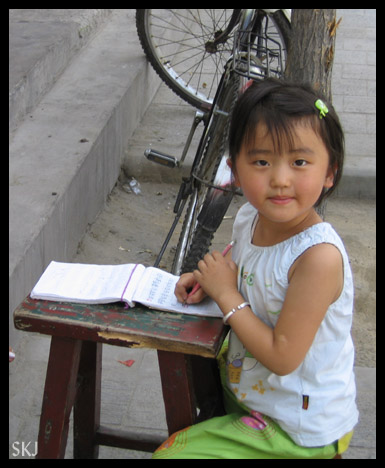 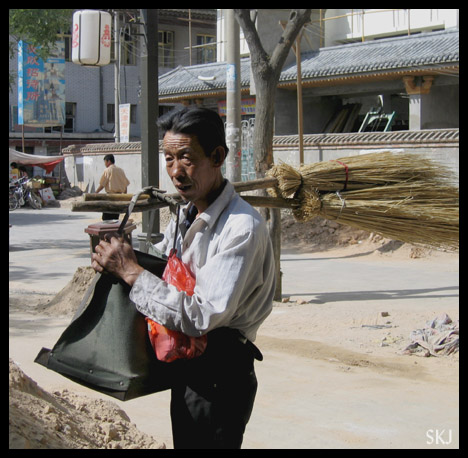