Cute Creatures in the North - Iceland

This was a day in which we started out early but with no particular agenda. We looked at the map and decided what was reasonably accessible to us, and decided to head for the north. Owing to a mention in the guidebook, we aimed for the town of Blönduós as our first destination.

We arrived there a bit peckish, right around lunch time. The town is printed in large letters on the map, generally indicative of a sizable place. But everything is on such a small scale here, and it’s all relative, so in fact large letters on an Iceland map indicate only a small town.

We drove around through a little cluster of buildings and noticed one was a guest house advertising meals. It looked just like a regular private home, and I felt a little odd just opening the door and walking in. In a small front room a handful of tables were arranged, so we seated ourselves. Ended up having a delicious lunch. The lady proprietor told me even though it wasn’t on the menu she could make up an omelet. As I normally live on eggs for breakfast at home, when she said that, my mouth watered, having been subsisting on instant oatmeal for the past week. A shot of the thriving metropolis of Blönduós: 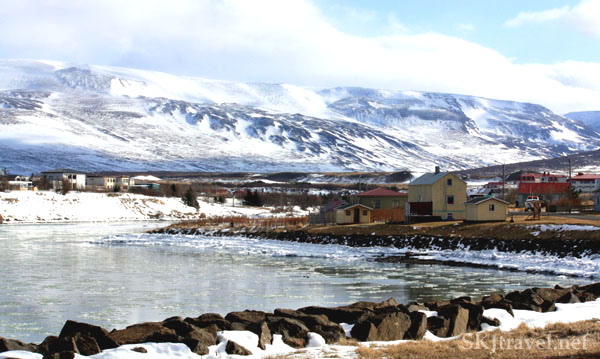 We had decided we might drive around the peninsula which this town was at the base of. We selected a town on the far end as a destination to put into the GPS unit that came with our rental car to see how long it would take, but the GPS would not secure a signal. So we decided to ask the lady how long it would take and if it was a worthwhile endeavor. She was Polish and decided her Icelandic husband would be better suited to answer the question, and so called him out from some other room. Initially annoyed with the GPS, we were ultimately grateful for its weakness, as it did us an enormous favor by forcing us to ask the proprietor and consult our paper map.

The man clued us in to the real draw of the local area, for some odd reason neglected in the guide book, which was the wild seals and also orcas. And these were to be seen around a different peninsula that we hadn’t considered touring. Well, when we heard “seals,” we obviously changed plans to go try to find them along the coastline.

After thanking our hosts perhaps overly profusely, we got in the truck, turned the key, and found the battery dead as a doornail. Nothing at all transpired when the key turned. Flabbergasted at this turn of events, Erik went back inside and asked for jumper cables. The man sent somebody else to find a jumper cable “kit,” as he didn’t have any. We waited only a short period of time and soon a fellow drove up in a truck, and in the process of hooking up the cables noticed that the wire to the positive terminal on the battery had come off. He fixed that up quickly with a wrench and we were good to go. For the rest of the trip, though, the wire came off every time we drove. So each time we started the car up, we had to first pop the hood and Erik would reconnect the wire. But we were so thankful that happened to us where it did, as we might not have noticed that wire ourselves and freaked out if the car didn’t start when we were in the middle of nowhere, as we often were stopping to take pictures or investigate a point of interest indicated by a sign on the road. Most of Iceland, for the record, is "in the middle of nowhere."

For example … we stopped at a sign indicating ruins, photo below. We would have had to walk for ages in bitterly cold wind to find a house and hope someone was home to help us. (we opted to travel per our modus operandi, without a cell phone) They were ancient ruins from the 900s AD, their function somewhat contested. Their location on a high bluff seems to me like evidence for the theory of a fort. 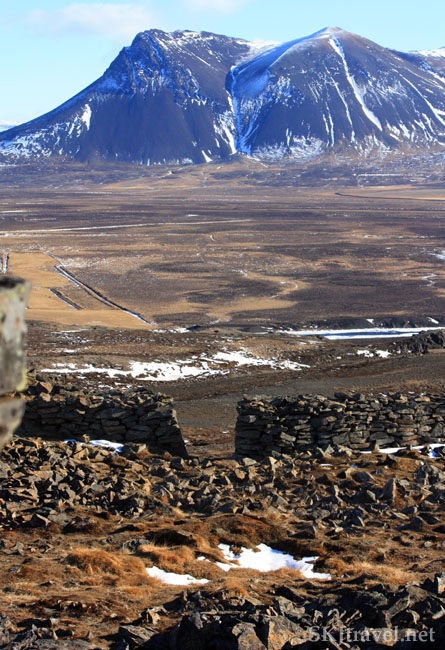 Some scenery along the empty roads in the north. 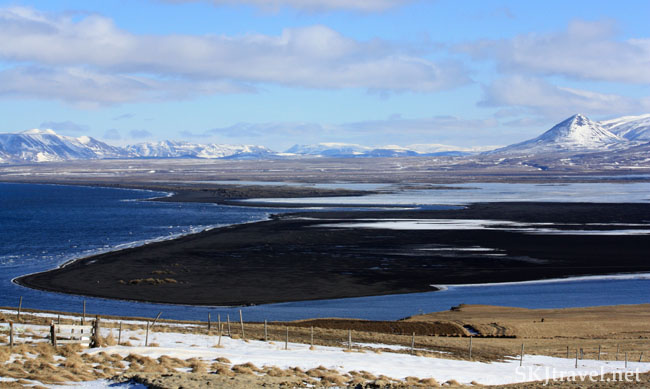 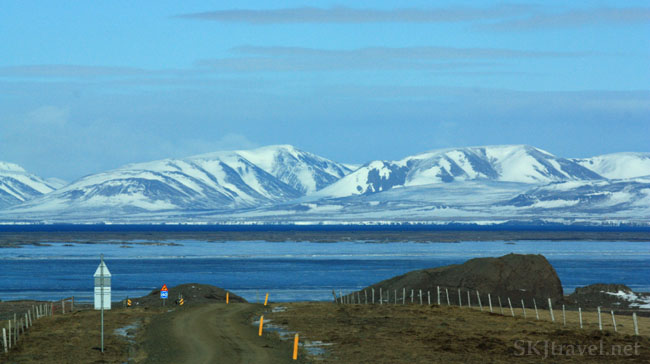 I didn’t get many photos of the horses we rode earlier in the trip. Though we passed many herds while driving, it was difficult to capture them in focus through the car window … getting a picture of a huge mountain while moving is one thing, of a small horse while moving is another. So I asked Erik to stop near a herd and I got out of the car and walked toward them to get some close-up shots. With my 250mm lens on, I didn’t have to get very close physically. But as soon as I got in the range I wanted, the horses came up to the fence like they wanted some attention. I couldn’t resist them, so I walked over, and sure enough they all wanted to be petted. I hadn’t thrown a coat on or anything, I didn’t anticipate being outside long. So I stood there shivering and petting all the horses. They are seriously the sweetest, gentlest creatures you could hope to meet. 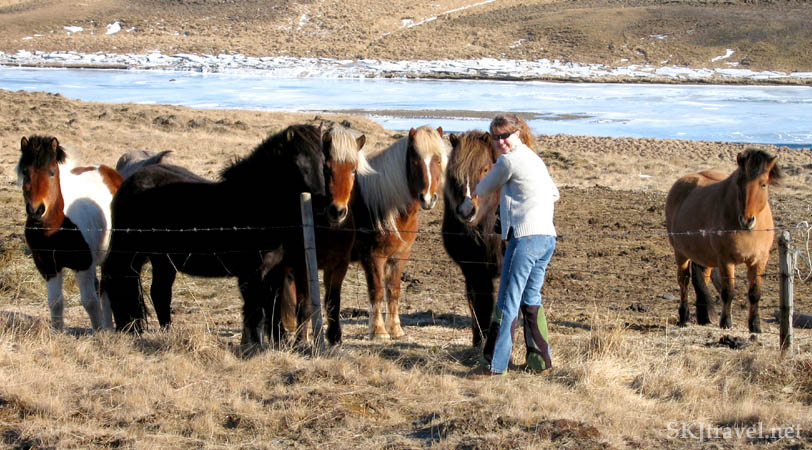 And their shaggy manes and thick-furred ears are so pretty. The ride-master (as I call her) told me their hair continues to grow longer as they grow older, so if you see a particularly shaggy horse, it will be an old one. A lot of the horses have their manes cut short in the front … I would presume these are the ones that are ridden the most. 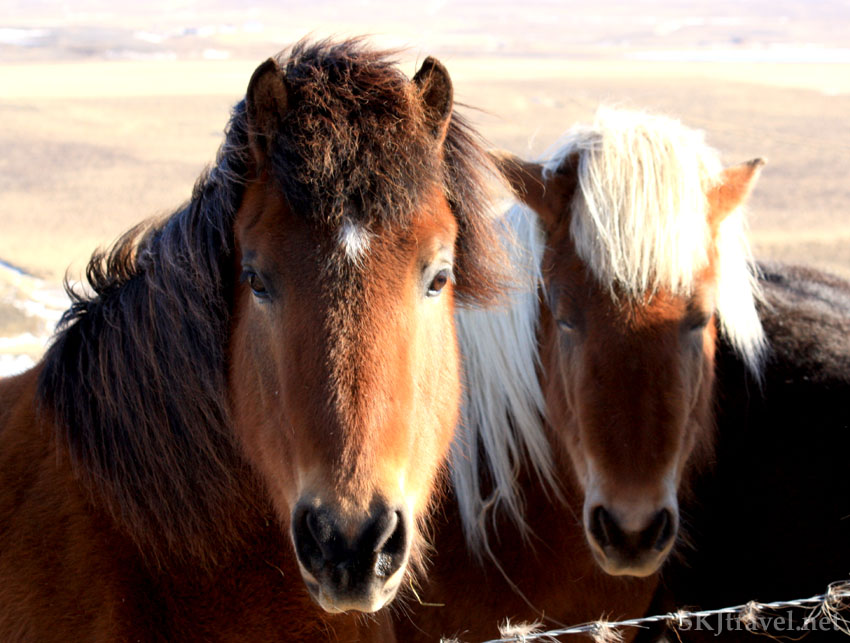 This fella, though, needs a hair cut. Look at how beautiful his ears are, outlined in black. I love him! (or her … didn’t look to see which) 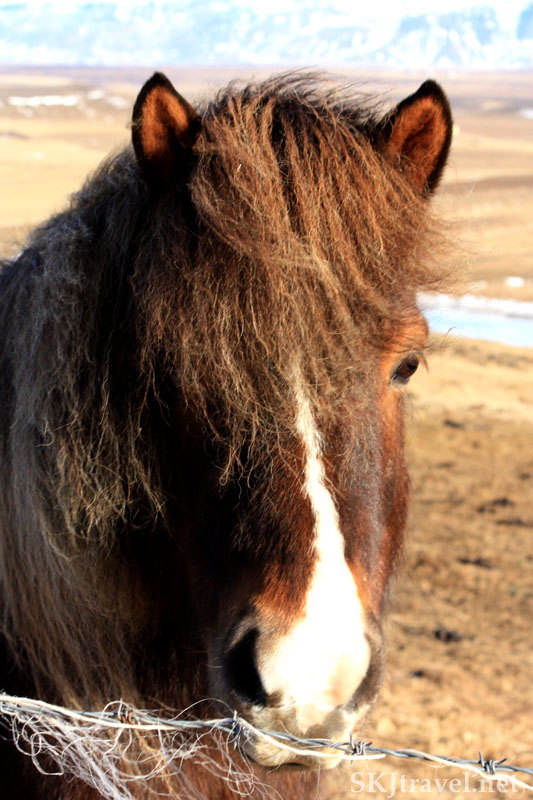 These two seemed to be particular pals, standing next to each other the whole time and nuzzling one another in addition to me. 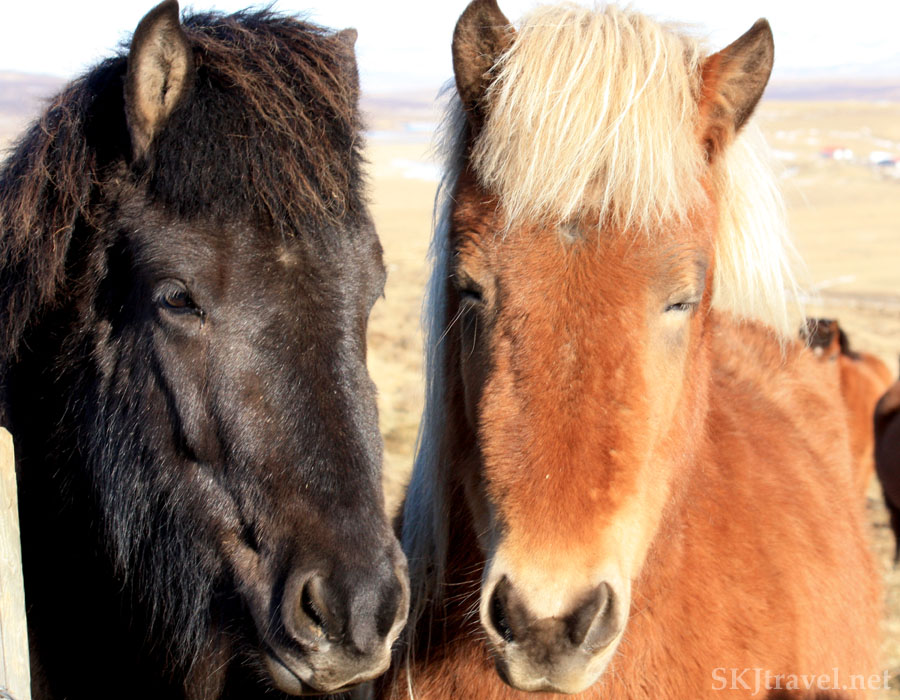 Such small horses (more like the size of ponies) in such a large and dramatic landscape of looming mountains somehow makes them even more picturesque. And their long shaggy manes were always blowing in the persistent wind, giving them an almost heroic presence, standing bravely in the arctic weather. When I import my Icelandic baker to bake their delicious bread for me each day, I'm going to have him bring an Icelandic horse for me to keep in the yard and pet each day. 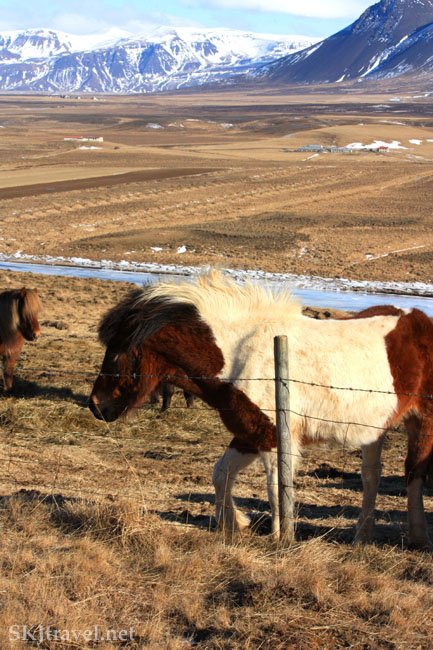 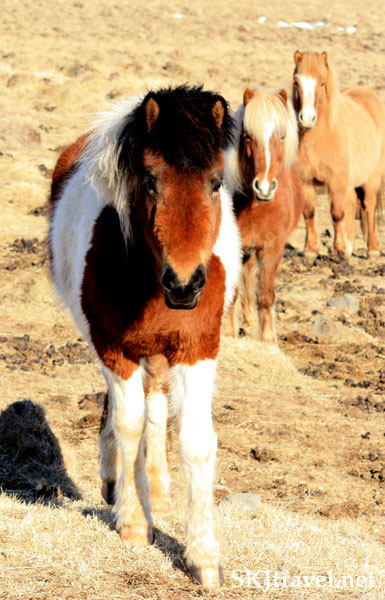 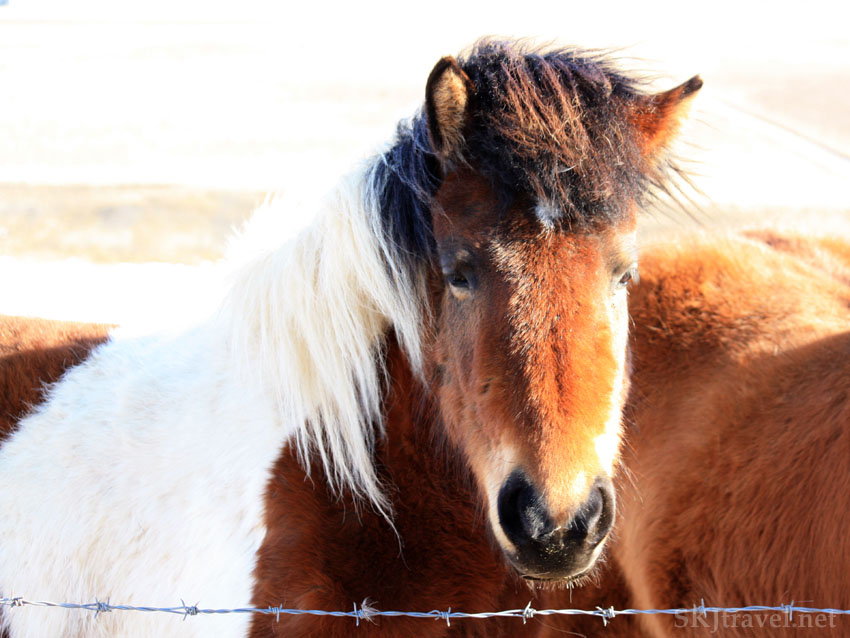 We were wondering aloud to each other how we would spot the seals or know where to look for them when we saw a little sign on the road with a blue icon of a seal. Bingo! We parked at a farmhouse and followed a rather lengthy path … I was beginning to wonder if the path went on forever and there were no seals out today, when finally I could see a small hut on a rise. Just before reaching the hut, I heard some barking noises just like seals make. A worm of excitement crept up my neck ... I don't know if you get these, but when I have a sudden knowledge that something I've been greatly hoping for is imminently about to happen, I get this peculiar feeling in my neck.

I looked around, almost frantically, and spotted them just off the shore, lounging on rocks and clumps of seaweed. 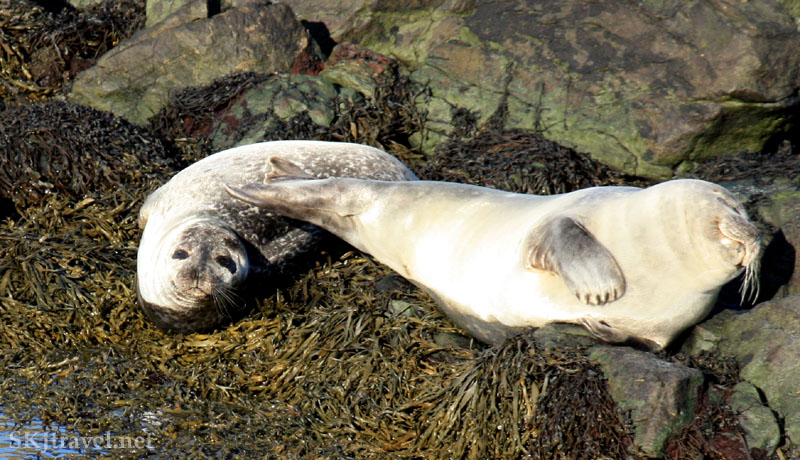 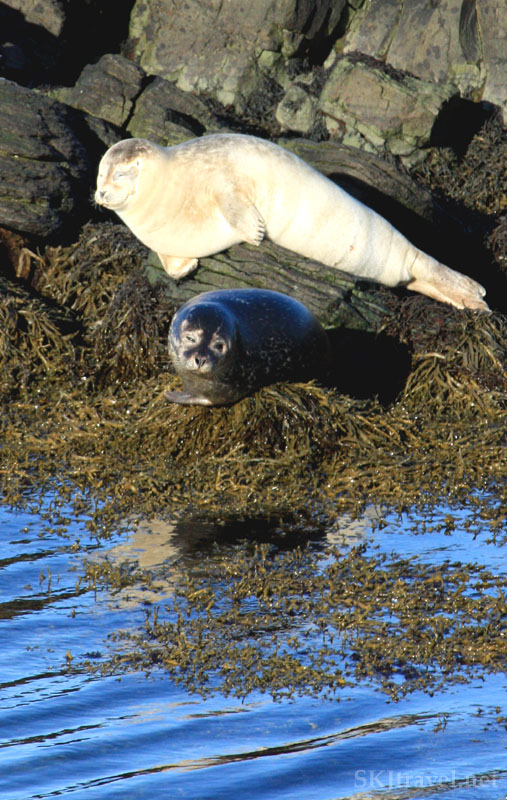 The hut is a little viewing hut with a couple pairs of binoculars and everything. Really nice to step into now and then to get out of the wind. There were some seals very close on the rocks, some further out, and some swimming playfully in the water. 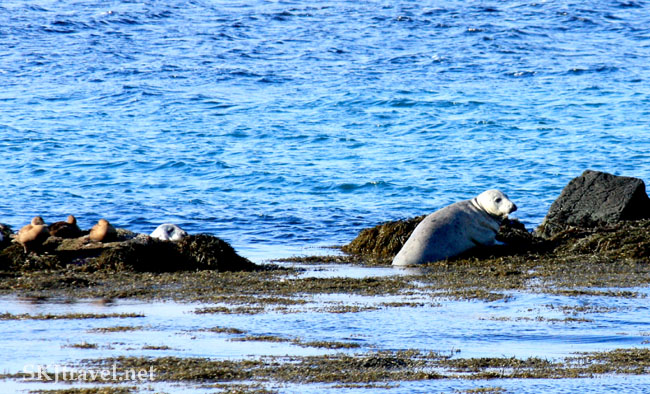 I like this guy because of his flippers ... first he looked like he was scratching one with the other. Then he just held them together, one on top of the other, looking so prim and proper like a human might sit with their hands folded. 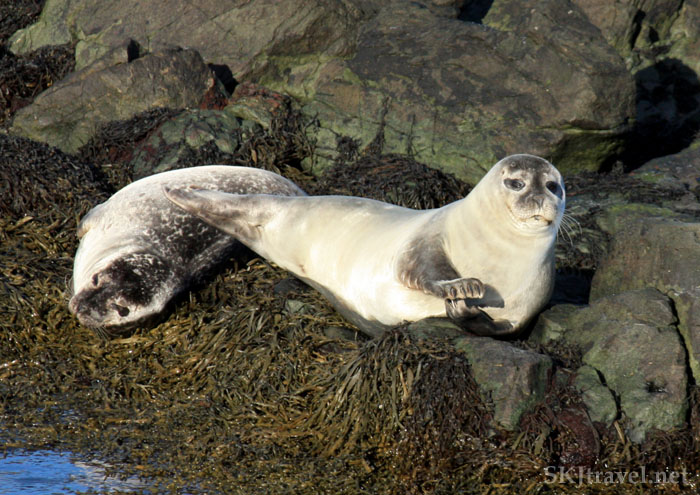 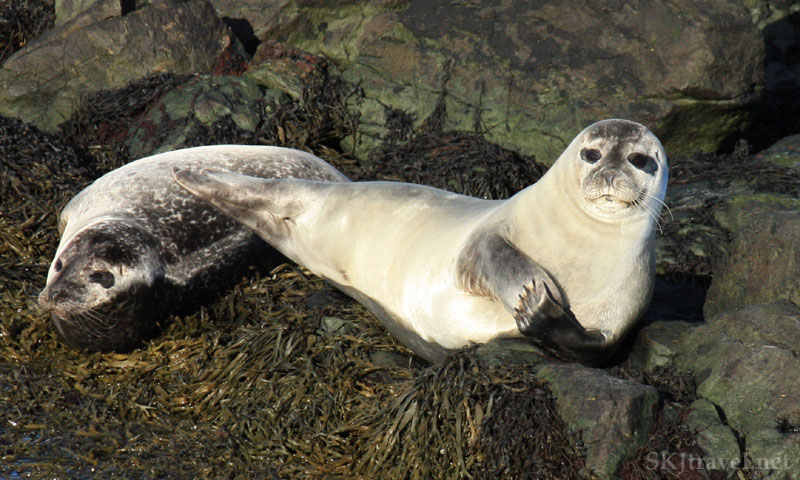 We watched them for quite awhile, but eventually the cold got the best of us and we returned to the car. We decided to get adventurous and take a “highland” road to make a loop going back home rather than simply retracing our steps. Our adventure was cut short after about 10 kilometers, though, by a rope with a neon piece of material around it stretched across the road. It seemed pretty obvious we were not to continue. Slightly disappointed, we traced back to Reykjavik the way we’d come. But the elation of seeing the seals in the wild did not wear off.

Here's a little secret about myself: sometimes at night when I'm in bed but can't fall asleep, I picture all the animals I've seen in the wild as a way to entertain myself in the darkness. Now I have sweet little seals to add to the reel. 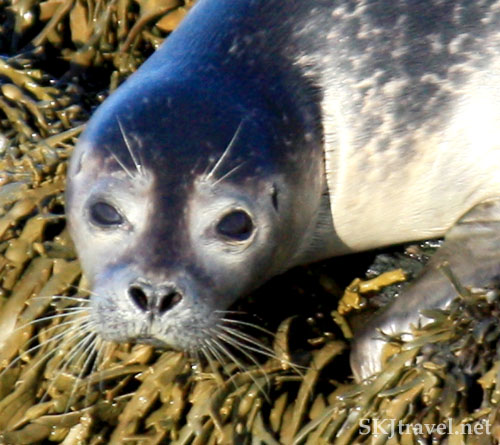 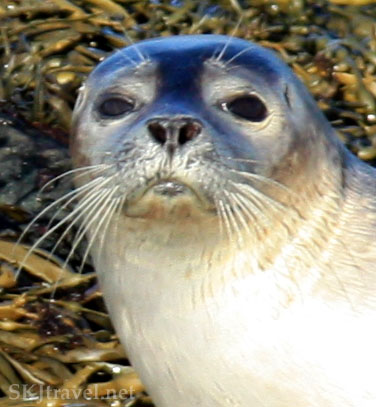