The Kindness of Strangers ... well, sort of

This is just one of those brief moments that will stick forever in my mind ... the mutual disappointment so tangible between us and our friend as our good deed fell short, and the image of him slowly walking away......

We intended to spend our last night in Lesotho at the renowned Sani Pass on the border with South Africa. As we were driving, it began raining. Shortly thereafter, giant flakes of moisture-laden snow landed on our windshield and soon the land was covered in snow, quickly piling up. Suffering a fair degree of stress, owing to South African-issue tires on our truck (which were never intended to encounter snow), we climbed higher into the mountains, then descended a series of hairpins at about two miles per hour, and finally (mercifully) found ourselves driving across a plateau.

In the distance we could make out a frantic figure beside the road – a man wrapped in his traditional Basotho blanket, pressing his hands together in a pleading, prayerful gesture, holding them out in front of his chest, shaking them with obvious desperation. He had been caught out unexpectedly in the rapidly descending storm. We made space for him in the back seat.

“No, we’re only going as far as Sani Pass.” Underberg was a city over 40 kilometers away in South Africa via a road famously treacherous in bad weather. We could never make it back into Lesotho before the border closed. I put my hands together in the same prayerful gesture he had, but I put mine to the side of my head and flopped my head over upon them. “We’re sleeping at Sani Pass.”

To make room for him, I had pushed to the side a basket of food and a cooler of beer. Bananas, cookies, and a loaf of bread lay in the open basket. From my passenger seat, I couldn’t tell if our guest eyed them, but we offered them to him anyway. He wolfed down a banana and some bread, and drank the beer like water as we forged on through the storm.

“Good?” I asked. He smiled and slouched down in his seat.

When we stopped at Sani Pass where we had reservations to stay at the Sani Top Chalet, confusion swept over the man, who was now warm and full, and perhaps a bit buzzed. Obviously this was not OK.

I shook my head. “No, Sani Pass.” We pointed toward the chalet.

He stared out the window for a minute, studying the round, stone buildings, icicles dangling from the rims of the thatched roofs. At last the situation dawned on him. Dejected, he slowly opened the car door and pulled his blanket tight around his neck. Snowflakes swirled into the car in a gust and accumulated rapidly on the man’s shoulders and bare head – each delicate flake falling from the sky toward its terrestrial destiny in brief possession of its very own crystalline shape.

Suddenly, impulsively, my husband reached into the backseat, gathered up all the food we had and shoved it into the man’s arms. He bowed his head in a gesture of gratitude and stepped out into the blizzard, into a landscape rendered featureless, a white canvas at the edge of the Mountain Kingdom. We watched him for a moment as he hunched his shoulders forward against the driving snow, his bare hands clutching the foreigner’s food against his chest. 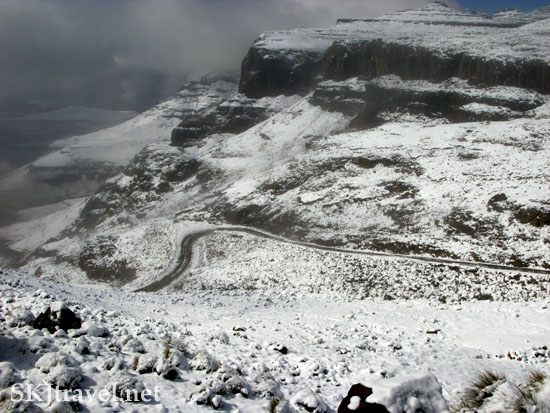