Let me begin with a somewhat irrelevant comment, but the truth about driving in Tunisia is that we have never felt so psyched in having rented just the right vehicle as we did in this country … we used our truck's 4x4 low-gear high-clearance capacities over and over. So one day we drove up to what was marked as a 360-degree lookout scenic point on the coast, which we couldn’t have done without the truck. Anyway, when we reached our destination, we found a handful of houses and a government building at this little coastal outpost. Two men approached us and, in the familiar routine, we had to navigate through an unexpected conversation with my very rusty French. In the end, we figured out both of the things they wanted … (1) for us to sign a registry book, (2) to give one of the guys a lift down to the nearest town. We agreed to the latter (well, to both) and indicated we’d stop back by there when we were ready to leave.

We had given a lift to one other fellow one day driving along an incredibly lonely stretch of road through flat, scrubby desert country. It had been ages since we left a town and the map didn’t indicate another one for quite some distance. When we saw a man hitchhiking along this stretch, we couldn’t bear to pass him by, because the other thing is that we hadn’t encountered another vehicle in ages … if we passed him up it would likely be a long time in the hot sun before another car came along. Later we learned that it is (or was at that time, anyway) an important point of the country’s etiquette that you pick up hitchhikers precisely because of the factors we noticed. If you’re lucky enough to have a vehicle, it’s common courtesy to pick up someone who doesn’t. Our hitchhiker was clearly tickled to be picked up by foreigners … there weren’t actually very many self-drive tourists in the country.

So this transportation request at this isolated community didn’t surprise us. We had expected the young man to be waiting for us looking just like he had as we signed the registry -- in white shorts and shirt, flushed with the heat. Maybe a knapsack or something. Instead, we found a freshly-showered, sharp-looking young man with his hair slicked back with gel, dressed in new blue jeans and a plaid button-up shirt. And a palpable change in attitude to match.

“Wowee!” we exclaimed. Then he climbed in the back and we just about choked. He was obviously heading to town to meet, or hoping to meet, a young lady. I hoped she had some sort of olfactory disorder like clogged nasal passages or something … the guy must have poured half a bottle of cologne over himself. In the heat we naturally preferred to close the windows and have the air-conditioner on in the vehicle. But the cologne rendered this impossible; it was imperative we roll down the windows to let in fresh air. This may have disappointed our passenger, expecting to benefit from the luxuries of a brand new swanky car such as we had. But we would have choked to death otherwise, and he seemed pleased enough with his ride. I’m pretty sure we left contrails of perfume for miles behind our pickup truck. It’s just one of those funny little things I will always remember … the Tunisian heading out for a night on the town, sitting in the back seat in a serene, if slightly obscene, cloud of cologne.

Our trusty truck, "the camel truck," as she became known. 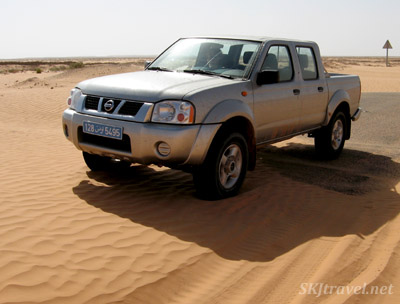