Birthday with the Qashqai Nomads of the Zagros Mountains

Certainly today has to be the most exotic of birthdays, even since my resolution to be always traveling on my birthday. I spent it with Qashqai nomads in the Zagros mountains. 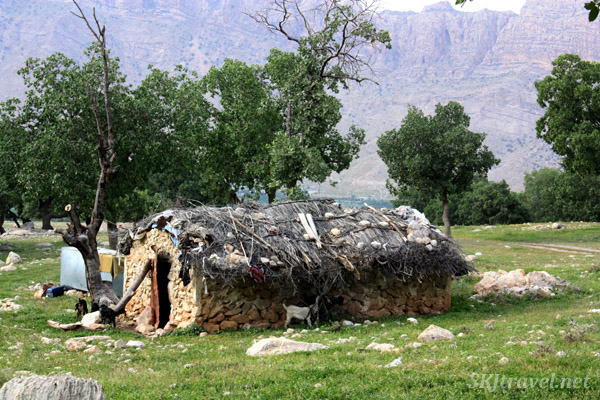 We woke up in Shiraz, and first off went to the tour agency we booked our guide through to pay them … with the sanctions imposed on Iran it has become a cash-only society because they can’t utilize banks outside of Iran … you can only have credit cards issued by Iranian banks for use only in Iran. So we were very relieved to unburden ourselves of all that cash to keep track of. We were ushered into a conference room to sit at a large table with several people. Then a man came in with tea and candy for us. I was expecting something rather involved – maybe we had to sign some papers, talk about details or something. Several people came in to greet us. But in the end, all we did was hand over our envelope of money after drinking our tea.

Then Mr. Qajar, the owner of the tour agency who sat with us at the head of the table in the conference room in a crisp pin-stripe suit and argyle socks, said he was coming with us to see the nomads. For a minute I had a flashback to China when the hotel manager in Datong spontaneously jumped in our taxi with us and spent the whole day as our guide. But this, it turned out, wasn’t spontaneous. Mr. Qajar was in fact the one who had the 4x4 vehicle and all the camping gear we were told would be supplied for us to spend the night with these nomads. 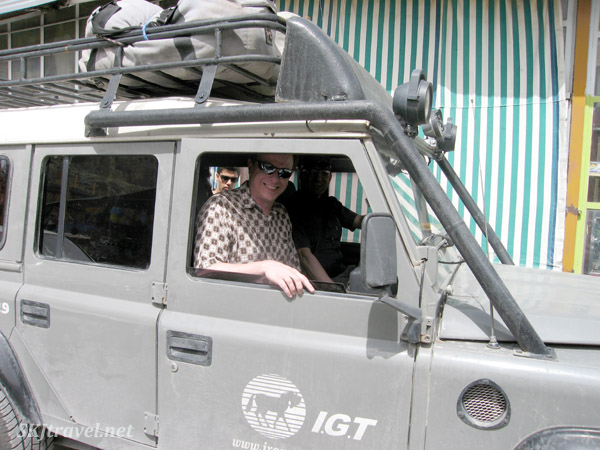 So we went around the back of the building to find he had stripped off his coat and tie to load up this vehicle. We then drove to pick up Farshad, who Mr. Qajar said would be helping us. And THEN, guess what! I got to see the inside of an Iranian medical clinic! Yep, it’s my new traveling theme ... to see hospitals from the inside. ha ha. This time, however, it was not I who needed the medical services. Reza, our guide, is sick with a sore throat and aches and fever, so Mr. Qajar insisted we stop by this clinic for him to get an injection. So for once instead of sitting on a gurney with a doctor, I spent my time sitting in another conference room (administrative room) drinking tea and eating sweet biscuits. The directors insisted on entertaining us thus while we waited for Reza to be treated. We just sat and killed time with Mr. Qajar and the tea until Reza was fixed.

We stopped along the way to the nomad’s camp at Mr. Qajar’s favorite restaurant along the roadside. While there, being my birthday and all, we tried a hooka with peach flavoring. It seemed the previous smoker had had a mint-flavored bowl. So it was a peachy-minty flavor and quite tasty. 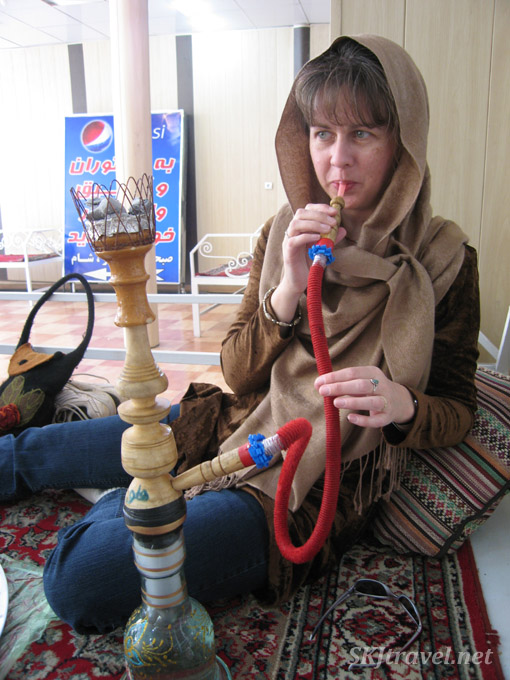 I confess this nomad experience was different than I expected, as it was billed as a night spent with nomads to witness their daily lives. I kind of thought it might be a little hokey with the “nomads” more like performing traditions for the sake of tourists to see.  I thought it would be a large camp of nomads with probably some kind of posh tents set up for tourists to stay in. Maybe they weren’t even truly nomads anymore. Still, I felt it would be an interesting experience since I know absolutely nothing about traditional Iranian cultures.

But au contraire … it was a much more “authentic” experience than I imagined. Mr. Qajar had called ahead to make sure these nomads were where he expected them to be (for everyone on the planet has a cell phone, of course). We drove into their encampment, a couple hours’ drive from Shiraz, which was largely permanent structures they had recently built to inhabit during their yearly time in this location – they only travel back and forth between 2 locations. This was an extended family unit of about six separate but related families. Mr. Qajar picked out a grassy spot along the side of the little path into the camp and parked the vehicle, and proceeded to set up run-of-the-mill 2-season camping tents just like you would take backpacking or camping in America. 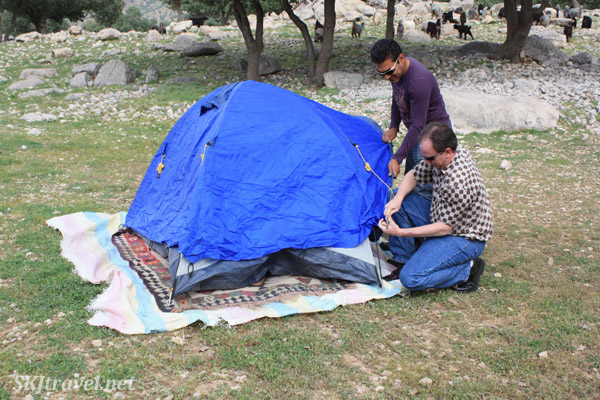 So we literally would just be hanging out one-on-one with these folks and full-on camping … even rougher conditions than usual because they didn’t have any sleeping pads for the sleeping bags. The hard ground was a bit of a bother on my body which turned a year older that day, but the uncomfortable sleepless night was completely worth the whole experience. Because of the sanctions it’s difficult to obtain and repair camping equipment. The tents had seen better days and had been repaired by Mr. Qajar himself with his own ingenuity. 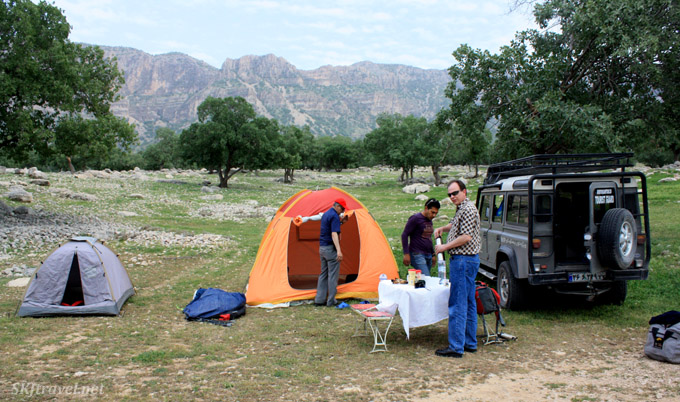 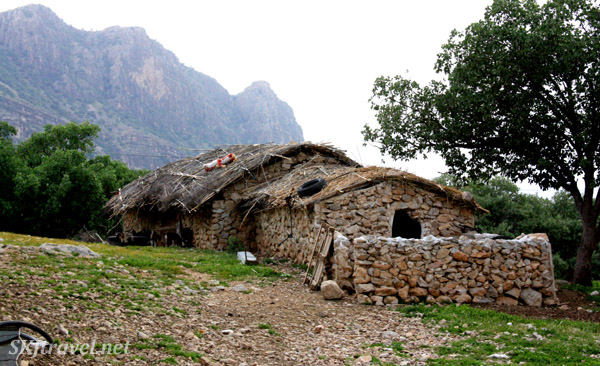 After setting up our tent, Erik and I meandered around the forested landscape for awhile on our own. It's quite fetching, with beautiful cypress trees and steep mountain faces rising up all around us. Herds of sheep and goats were grazing near our camp. 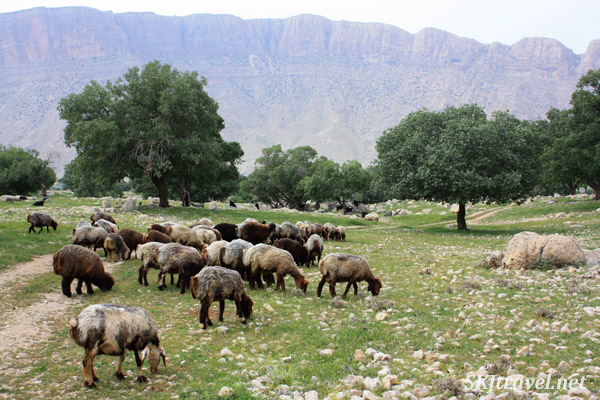 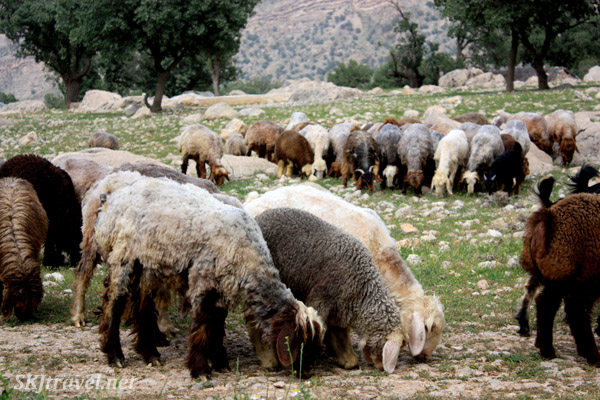 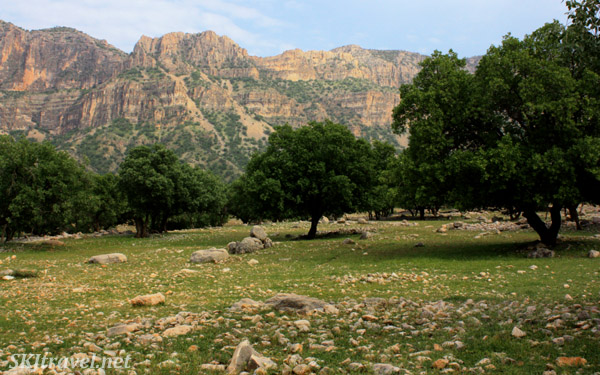 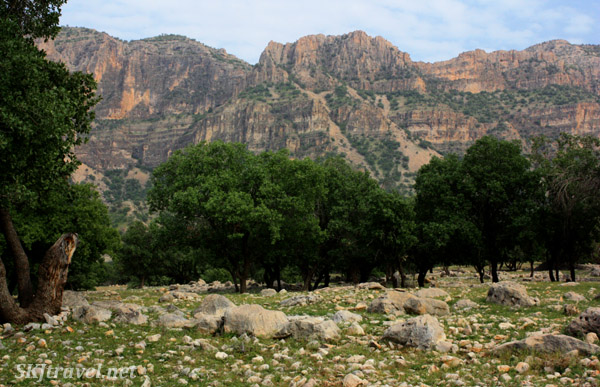 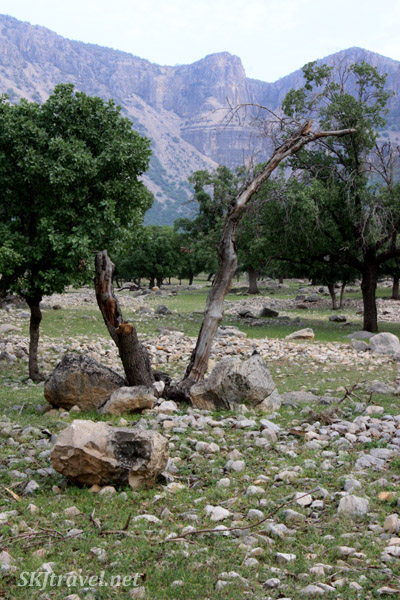 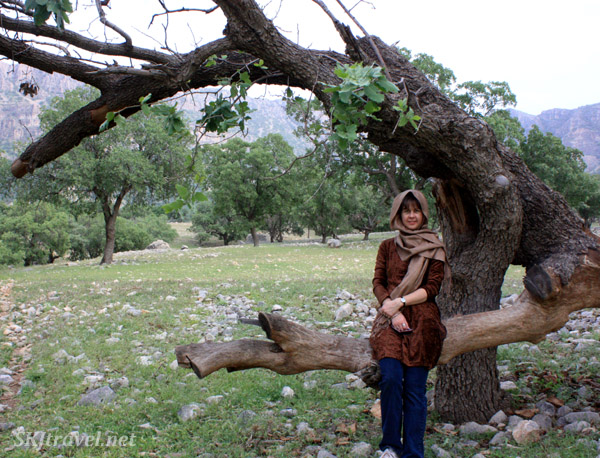 When we strolled back into our camp, Mr. Qajar told us a family was waiting to meet us, and that we should walk up the hill to their house. So we did. But we really had no idea what we were supposed to do, how long we were supposed to stay, and we had no common language with the nomads. But it was cool. They had us try fresh sheep cheese and hard yogurt balls and weeds growing on the ground, plus lots of tea, of course, and pumpkin seeds and other seeds and unknown little balls of sweetness. Not being a fan of sheep dairy products, it was difficult for me to swallow down the cheese and yogurt but I managed. Fortunately, the one thing they would have taken offense at is if I had refused tea, but unlike coffee which I’ve had to refuse before (for example, in Brazil), I could happily drink plenty of tea. 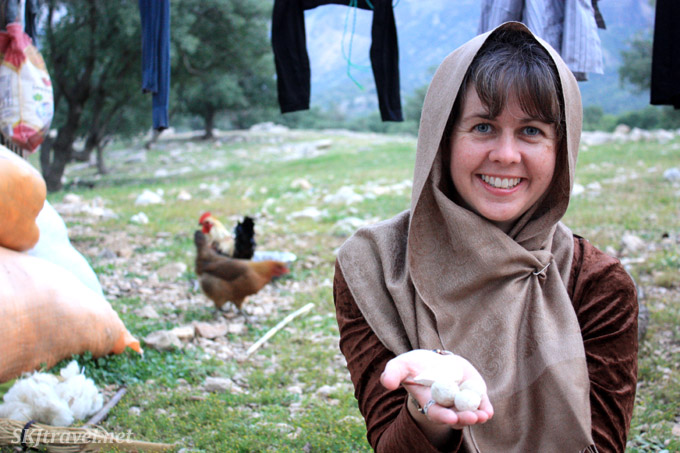 Erik and I were greatly amused by the young sheep and goats hanging around us, so adorable jumping around, playing and climbing on top of everything, eating trash and weeds and spindles of wool … one of the daughters of the man was a spinster, literally, as she was unmarried due to some sickness (which seems to affect her mentality, perhaps) and she spent the whole time she was near us spinning wool.They keep newborn sheep and goats under a little basket during the day because they’re too little to keep up with the rest of herd as the man leads them across several miles of terrain from morning until evening. The tiny one below in the basket below had been born only the day before. 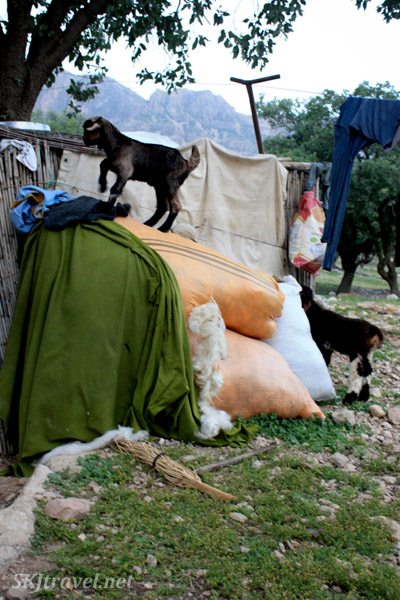 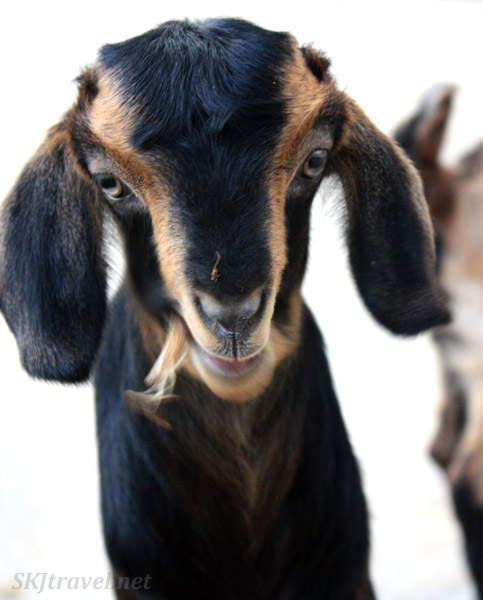 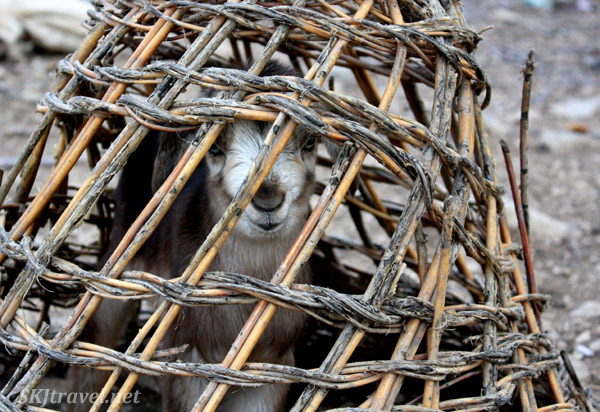 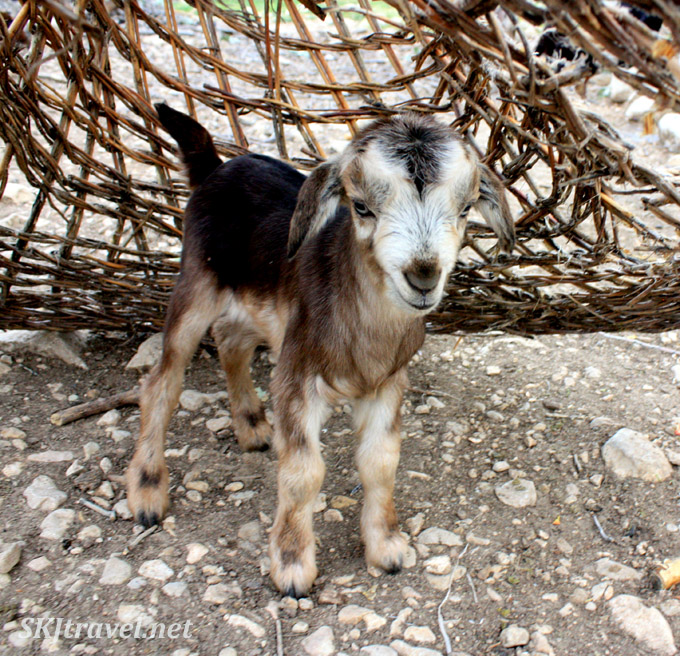 After Reza and our other 2 companions came up to hang out with us and the Qashqai family, one of the man’s sons came up and introduced himself. He shook all the men’s hands and walked right by me as if I didn’t exist. Reza said to me, “Don’t be offended.” I wasn’t because I’m aware that men and women who aren’t related don’t speak to each other in the traditional Muslim cultures. But it was strange to experience it firsthand after only reading about it … to be passed over as if I’m a ghost, a nonentity.

Farshad made a wonderful stew back at our camp while the lady of the house, who is one of the man’s daughters – his wife was run over by a vehicle while she was walking along the side of a road and was killed several years ago – made a large pot of rice. We ate the rice and stew together along with tea inside the “house” – the main structure which has carpets on the floor where the family sleeps and eats. The best part was “rice bread” – they fry bread in oil on the bottom of the rice pan and then make the rice on top of it, so the rice never gets burned, it’s perfect and the bread ends up kind of carmelized and crispy and delicious. 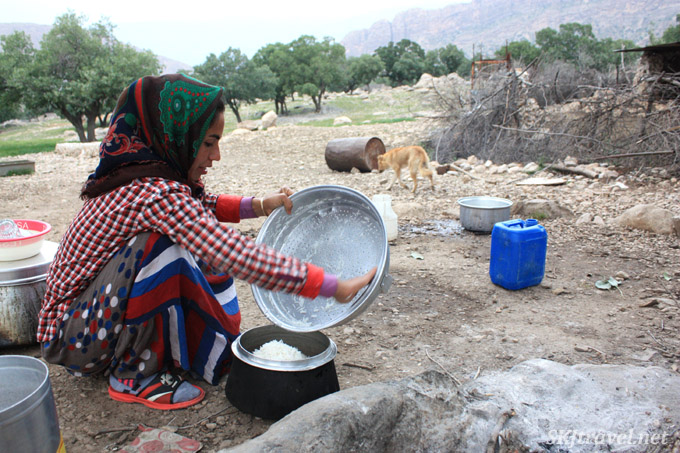 The Qashqai man told Erik he was drinking his tea wrong (and I was, too). You are to pour the cup of tea into the deep saucer the cup is served in and drink from the saucer! And if you want sugar in your tea, you don’t drop it into the cup, but hold a chunk of it between your teeth and drink the tea so you suck it through the sugar. Actually I’m very fond of this method -- the tea cools off immediately and you modulate the sugar intake with each sip. How brilliant.

The family was shy about having their photos taken, so I don’t really have any except a couple when they are working. The man is 69 though his birth certificate says 59 because his parents lived in a village and it took them 10 years to get to the city to get a certificate. He has never been to school, but his children have. He brought out his American shotgun to show us, he was clearly somewhat proud of it; it had a beautiful leather casing handmade by him (or family) on the butt. 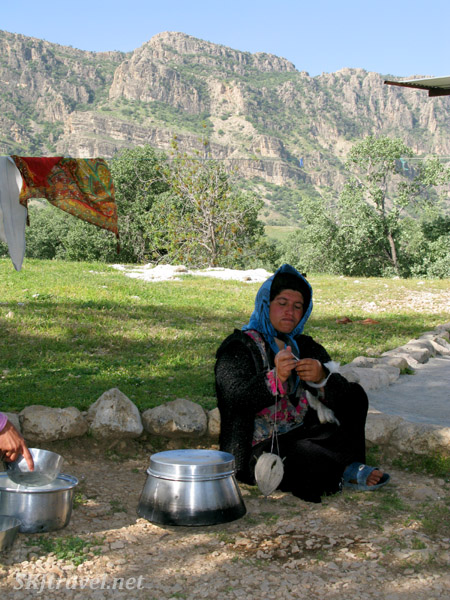 Mr. Qajar told a story (a joke) that had everyone in stitches laughing … one guy bets another he can bite his own eyeball. It turns out he has a glass eye, so he takes it out and puts it in his mouth and wins the bet. Then he says he can now bite his other eye. The other man thinks there’s no way this guy can have two glass eyes, so it will be impossible. But the guy takes out one of his false teeth and sticks it in his eye.

That night there was a wedding taking place in the town across the valley, and we could hear the music blaring and firecrackers and celebratory gun shots. So under the stars inside our little tent I could hear sheep and goats baahing and bleating in the night, cow bells ringing on some of the goats, a donkey braying, crickets chirping, a pack of dogs barking and howling, Erik and Reza snoring, and modern dance music blasting through massive speakers. And meanwhile the nomad family and their chickens nestle into sleep while their campfire dies down. 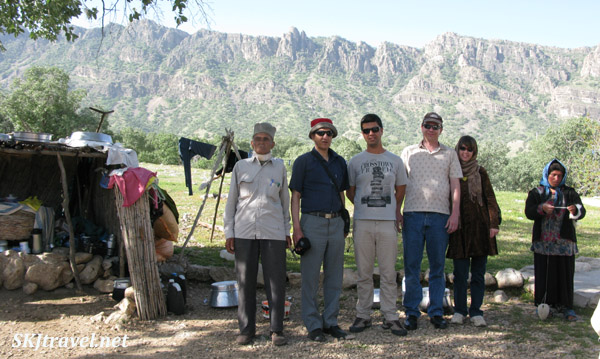 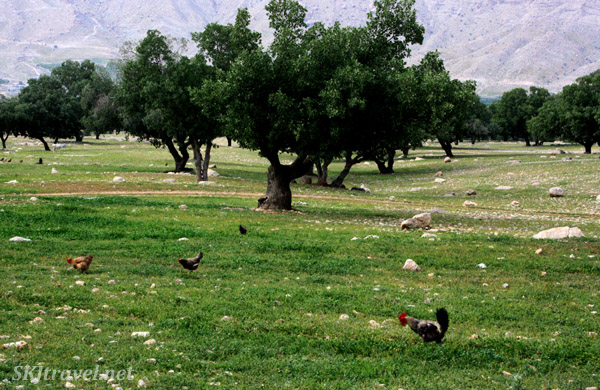 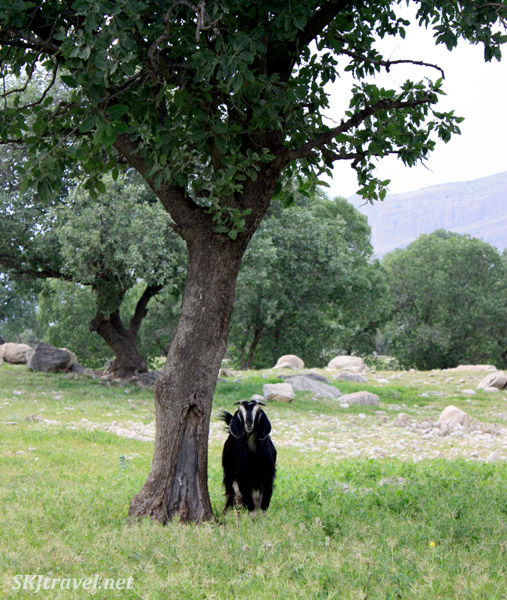 Read a formal essay I wrote about this night at Wanderlust: A Travel Journal