Wanna Tussle? Animal Encounters (with each other) in Etosha NP

One of the most joyful experiences I had in visiting Etosha Nationa Park in northern Namibia was watching animals tussling with one another. I never really saw much animal interaction in South Africa or Uganda, excepting all the various primates who were always extremely interactive. Our first night camping out in Namibia, at Sossusvlei National Park, a pair of springboks went sparring, horns locked, right through the edge of our camping spot. I saw especially a lot of impala chasing each other and locking horns with one another.

"OK, let's rumble!" these guys say. This pair in particular really went at each other -- backing up to get a running start and throwing their whole bodies into the collision, heads pushed into the dirt. It was kind of thrilling to watch such live action. (p.s. note that most of the photos in this post can be viewed larger by right clicking and opening in a new tab) 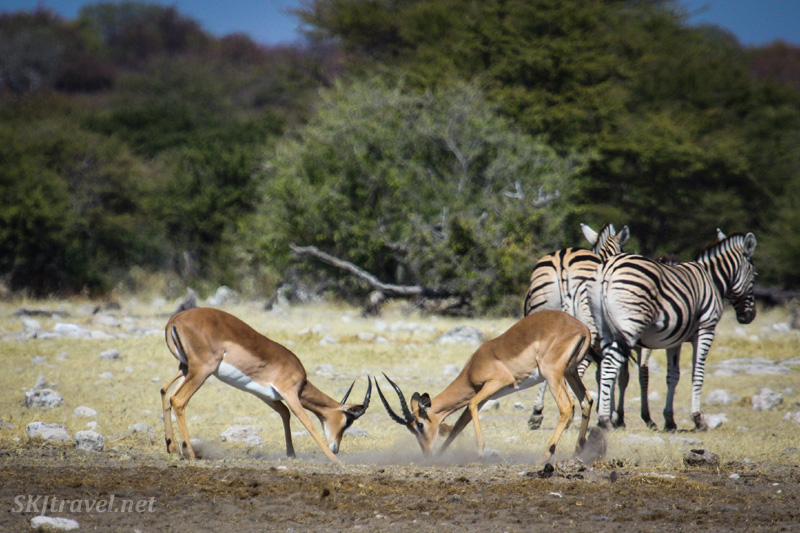 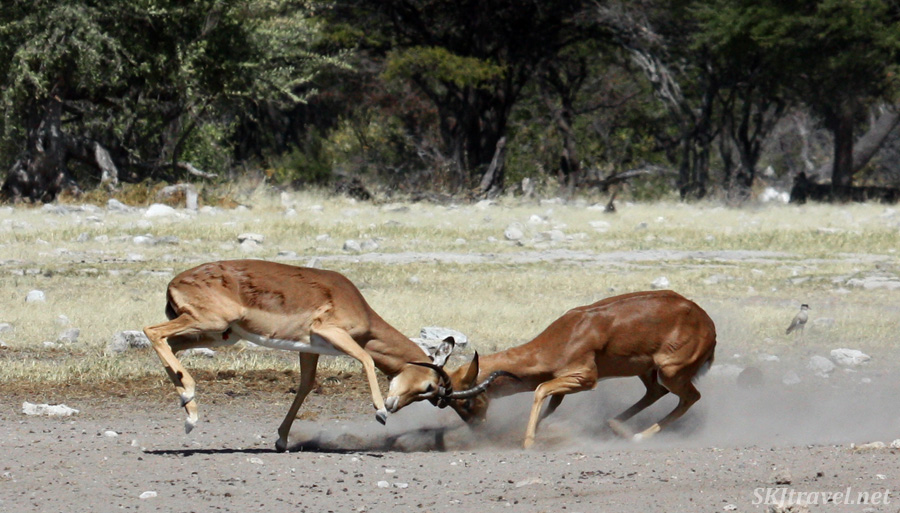 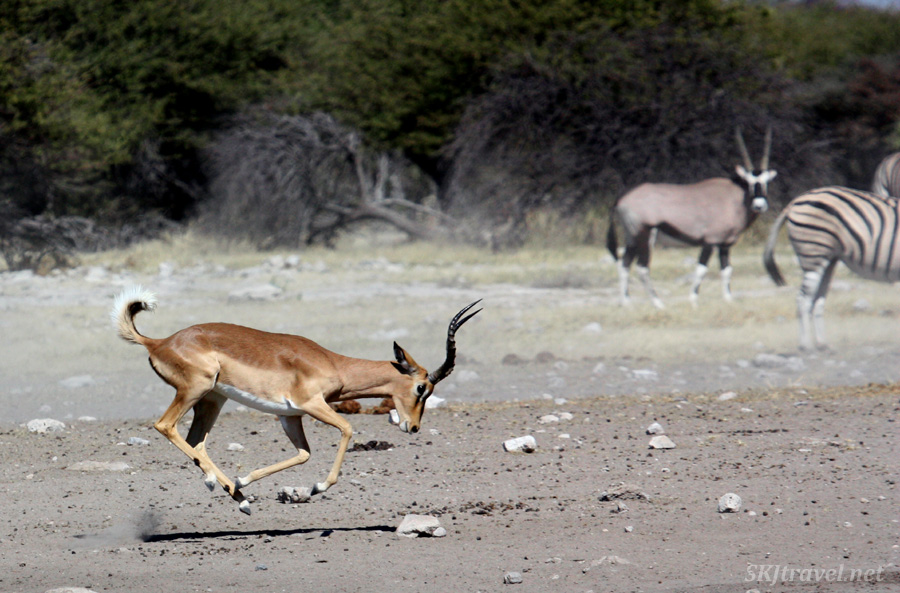 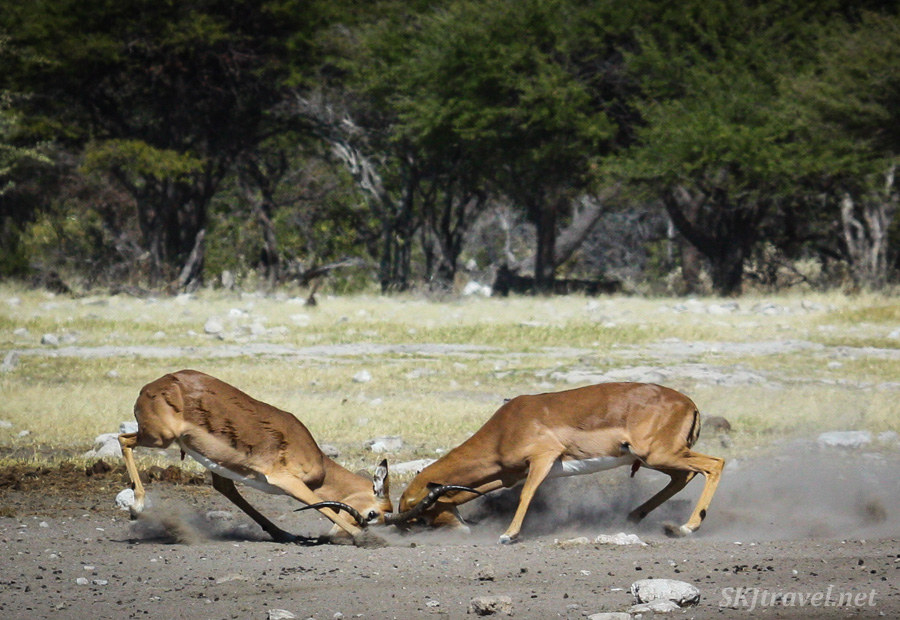 And now let's chase each other! I love how the guy on the left is about to slide out in the turn, all four legs angled out. There's a lot at stake, as the champion impala males will take control over a whole harem of ewes, usually somewhere between 15 and 30. 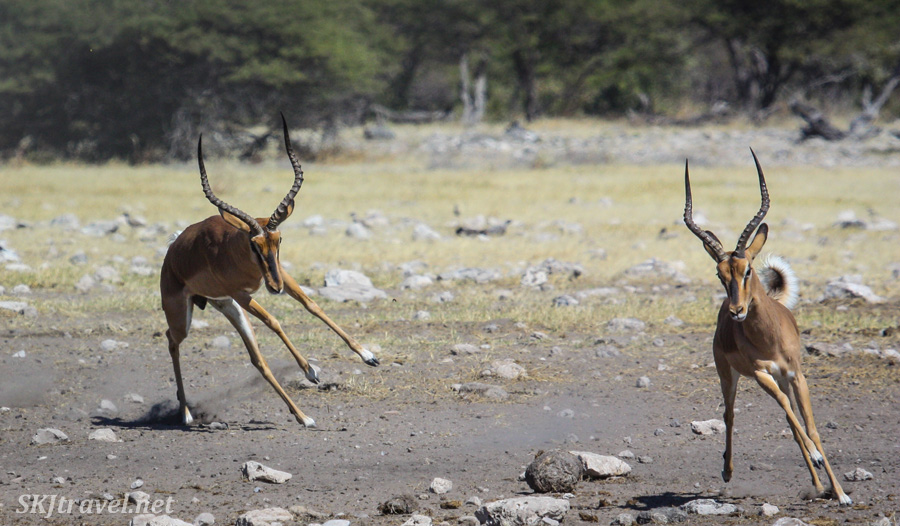 The ladies, of course, are far more sensible and have a drink together at the watering hole ... harem mates, I suppose. 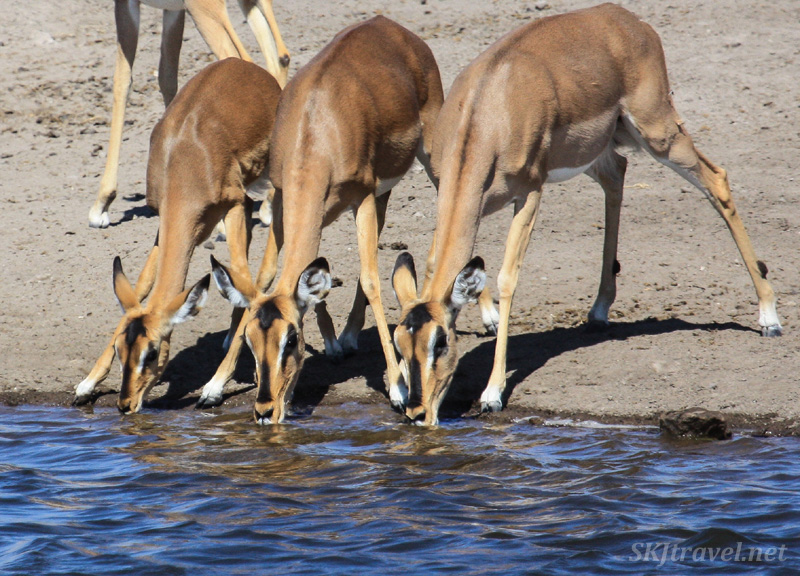 In this case, the fella on the right looks at a bit of a disadvantage with only a single full-size horn -- the second horn is just kind of a stump. I don't know if it broke off or was a birth defect. 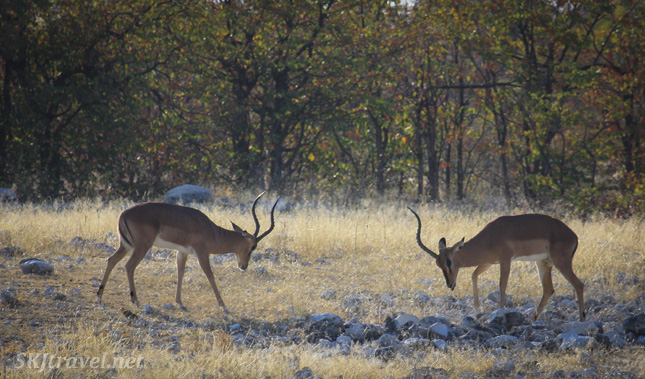 One morning we spied these adorable lions cubs playing next to a water hole ... pouncing on one another and tussling. First time I've ever seen this in the wild, so it was quite exciting ... unfortunately, at the very edge of my camera lens's ability to capture (these are hugely cropped in), but it was brilliant just to watch them, photos aside. 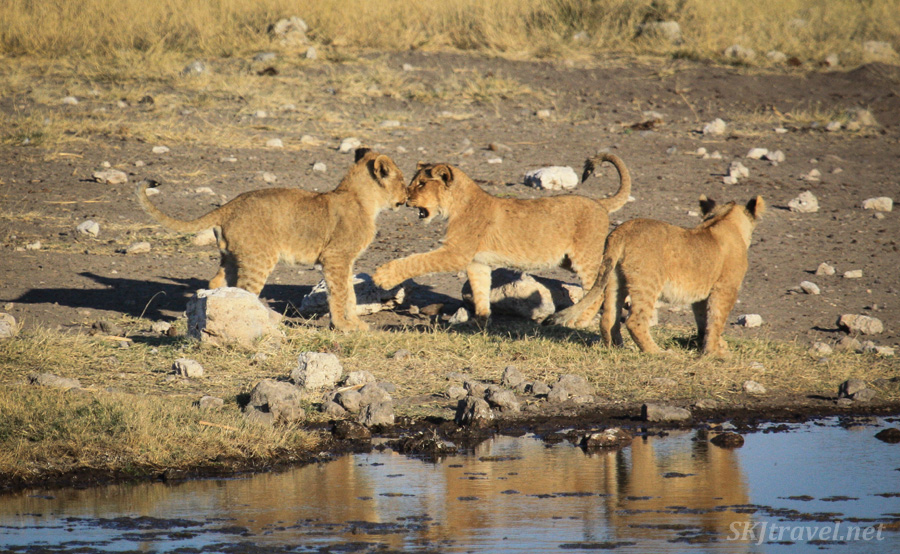 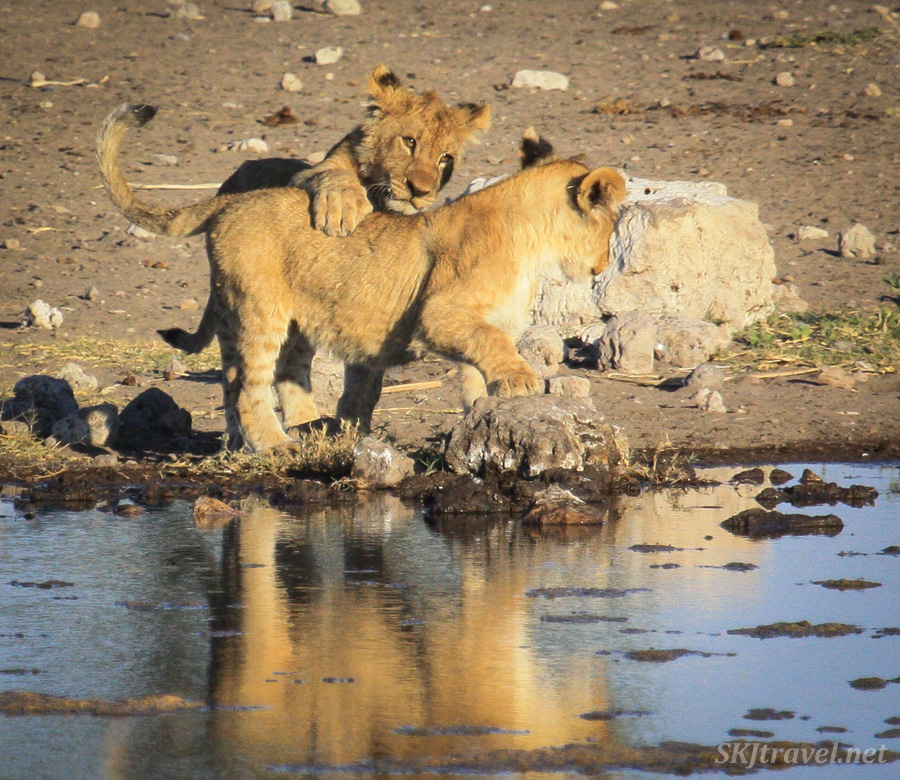 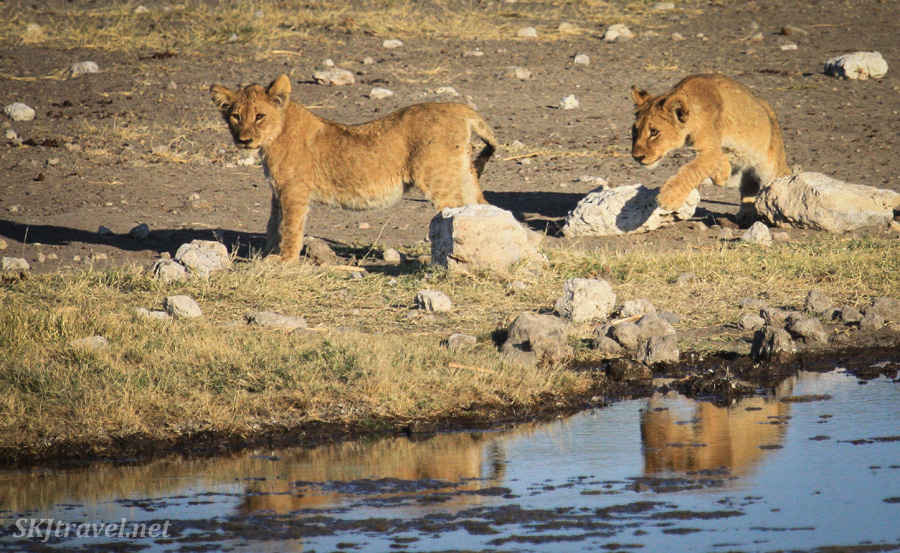 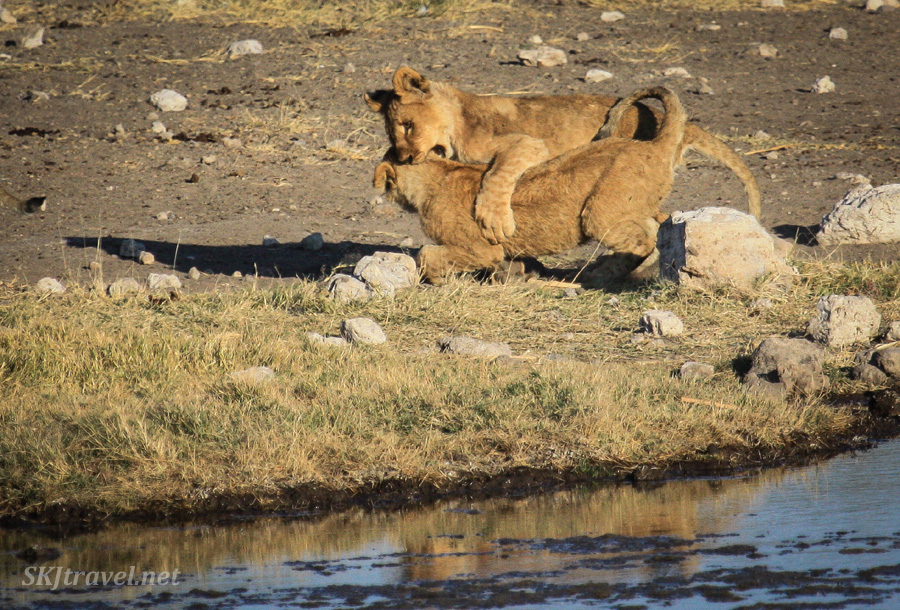 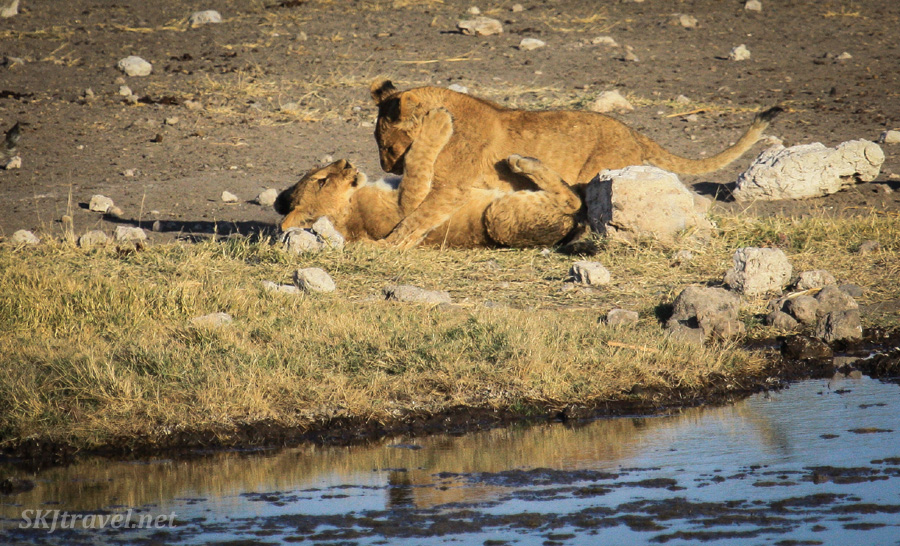 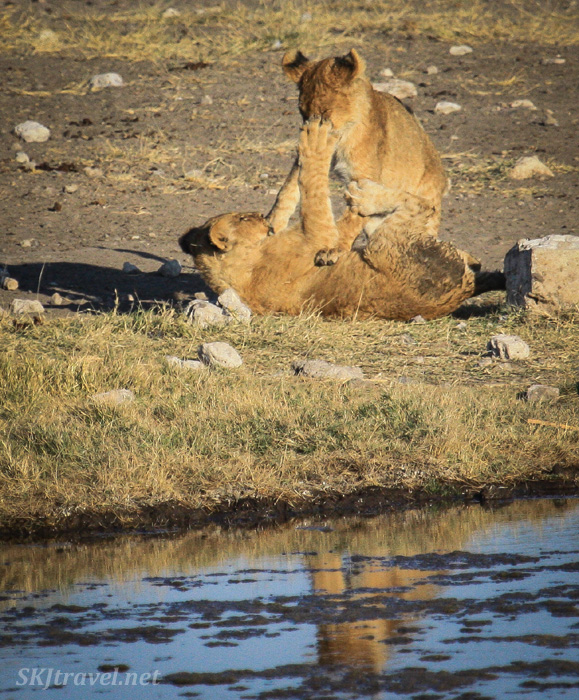 Most of the action in Etosha is at the water holes. My first night in the park, I was enthralled to find several bull elephants sparring with one another. They weren't very serious about it, just sort of testing each other out. But it was fun to watch their interaction. I'm not sure how to gauge their age except by their body size as the elephants in northern Namibia have much smaller tusks than those in East Africa. But other elephants were quite a bit larger than these fellows, so I'm presuming they were on the younger side. 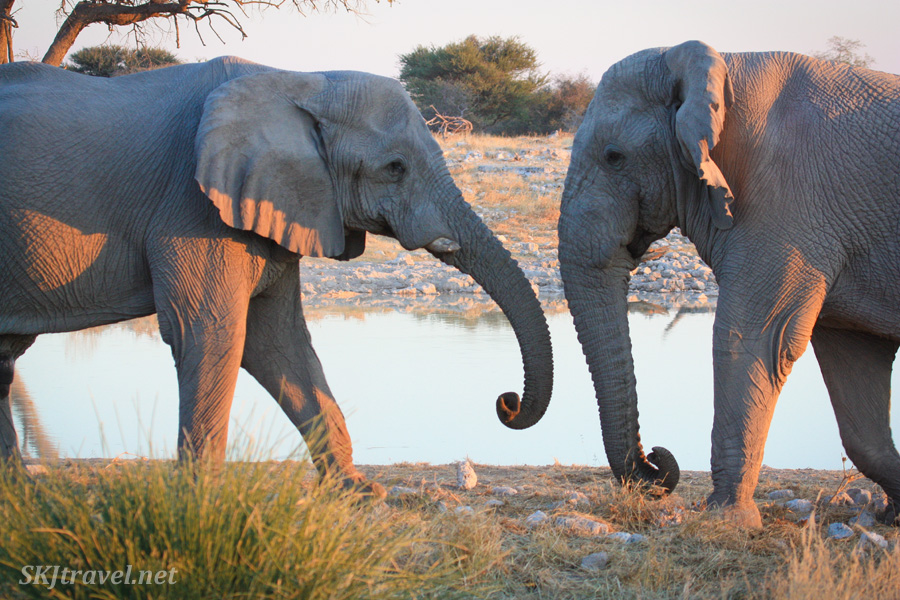 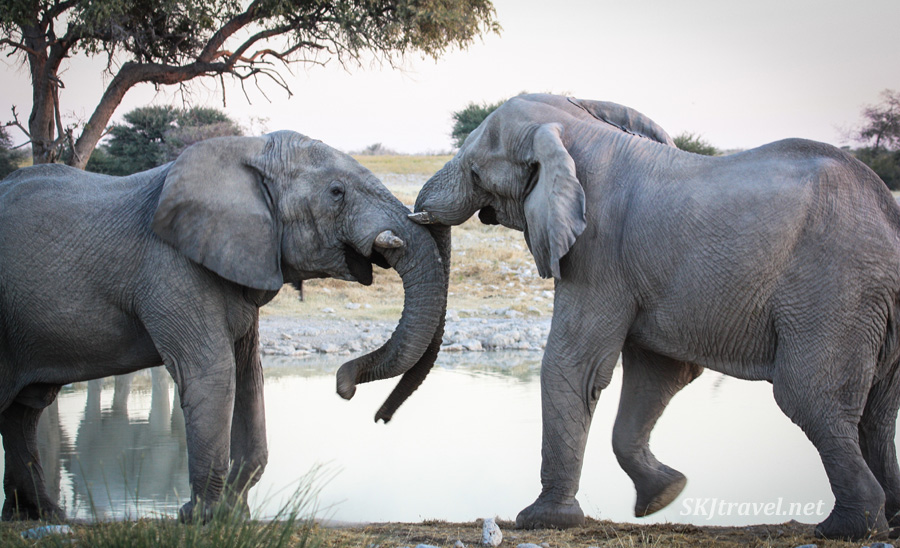 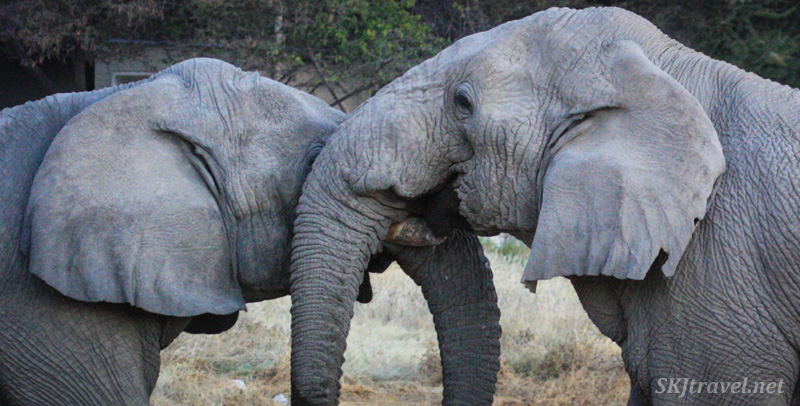 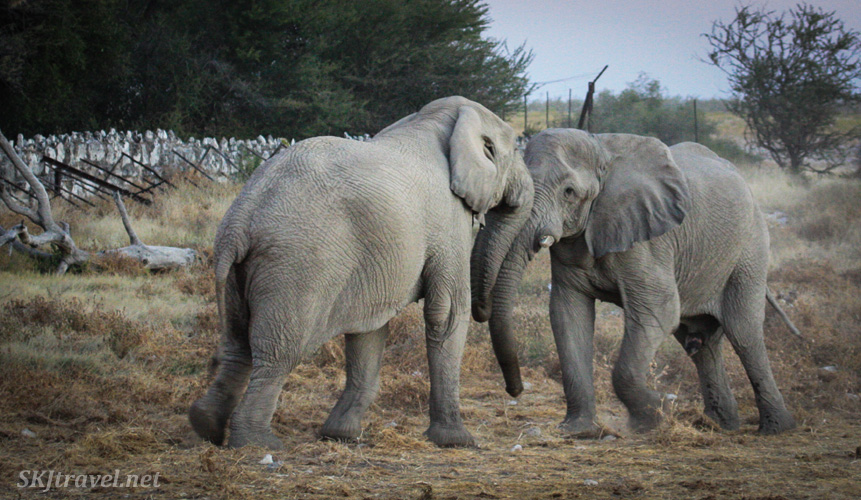 Fascinating to watch the interaction of their trunks ..... 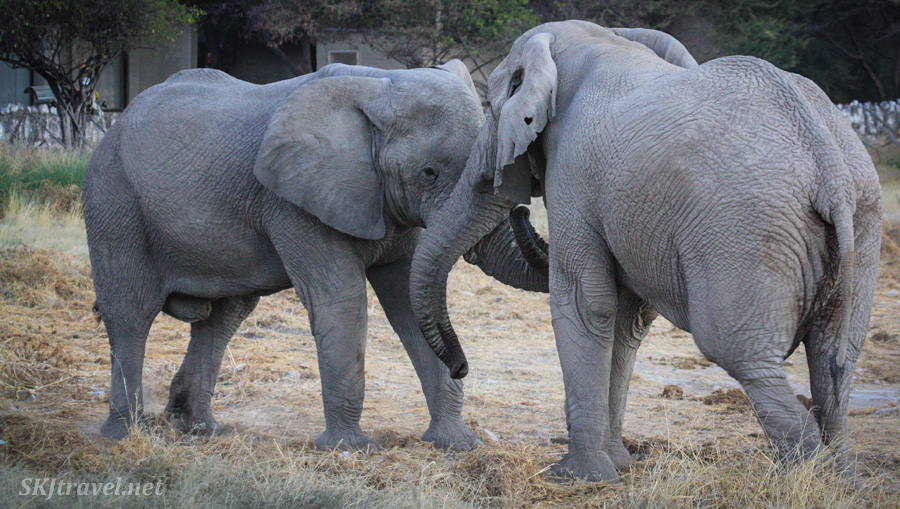 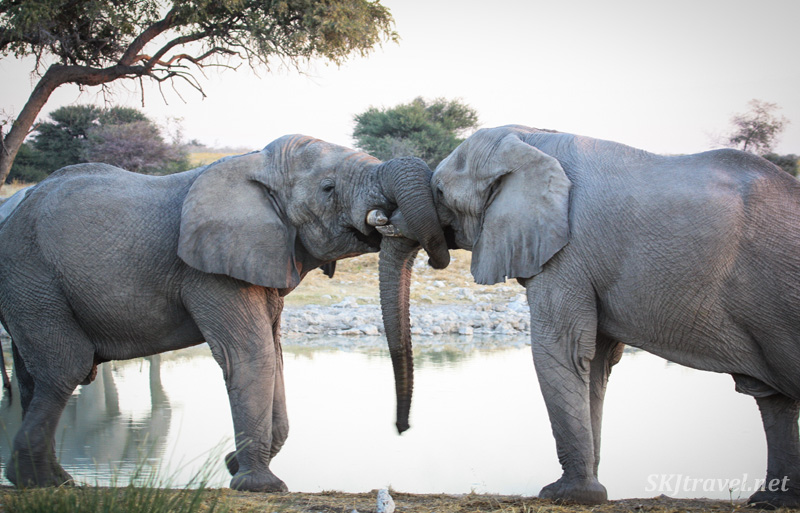 Here a couple youngsters are rough-housing in a boggy marsh. One definitely has the upper hand on the other one! I completely botched the photo opportunity -- not focused and especially the exposure was radically off ... it's a little less distracting viewed in black and white. And the little tykes are so cute in any case. 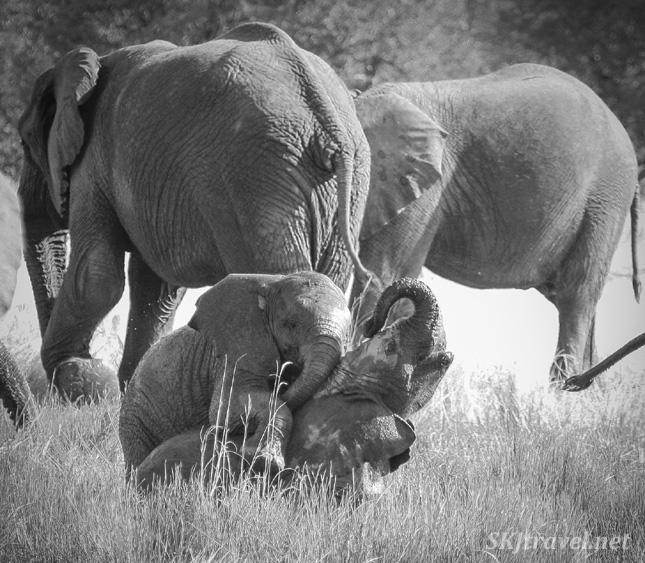 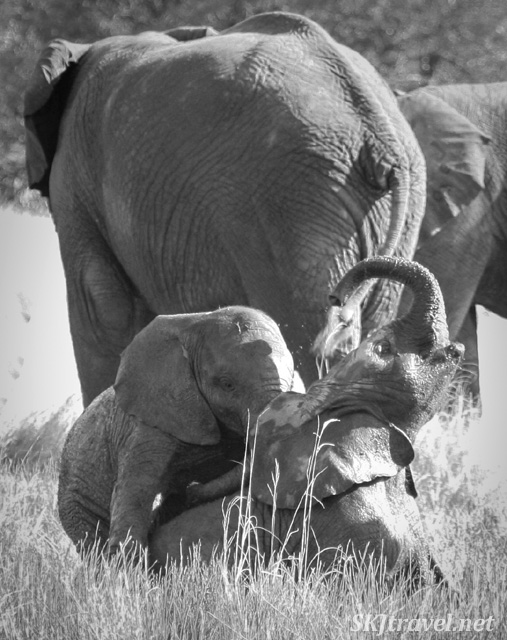 All these instances mentioned so far were in fun or only preparing for more serious confrontations, or ended without injury. But ultimately, the animals play for keeps. This poor black rhino had really taken a beating. Sad to say, the other side of him looked almost worse. He couldn't put weight on his one back leg. On the encouraging side, we saw him on several consecutive days, so he was hanging in there. But I wouldn't call his plight optimistic. By the end, he was looking pretty worn down, even a little emaciated. Our guide said his most likely fate was that lions would get him, sensing a relatively easy take-down. It was sad, but of course we all know that's the way nature works. It's humbling, in a way, to watch it play out on these vast plains in such an ancient drama. 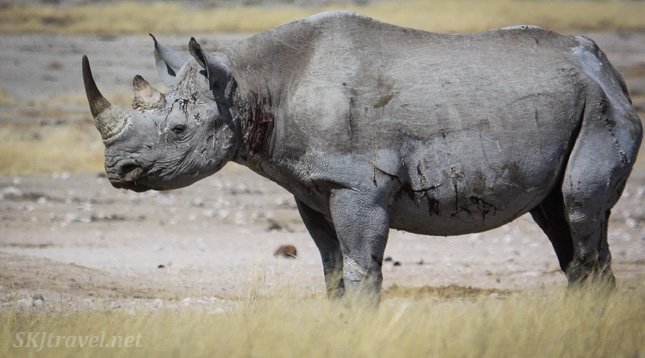 But to end on a little happier note, here are two white rhinos sparring at a game reserve outside Windhoek. They almost ran into the safari vehicle, they were so close, not paying any attention to us as they squared off against one another. 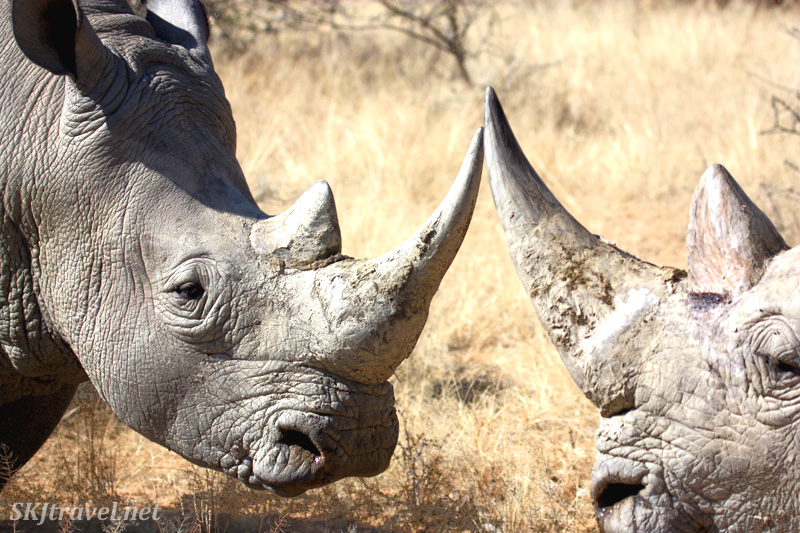 Hope you enjoyed a little peek at some of the African animal's world of encounters and interactions. One particularly amusing interaction I saw, perhaps the most amusing as well as startling, was at a water hole in Etosha where two black rhinos were posturing with one another. They'd been at it for awhile and suddenly a very large bull elephant who had been hanging out at the water hole sucked up a trunk full of water and sprayed it directly at the rhinos! It was as if he just reached the end of his tolerance watching them bully one another, and just said, "Hey guys, cut it out!" The ploy, in fact, worked.