Witch Doctors and Blacksmiths in the Rwenzori Mountains

From Fort Portal I took a hike along the lower Rwenzori mountain range. Was torn between hiking to a peak or taking this route which included cultural experiences. But I suppose it was inevitable that I would choose something that included both scenery and a cultural component. And a good choice it was, since it was overcast and foggy, and there would have been no view from the peak.

One of our stops was at a witch doctor/fortune teller’s house to have my fortune told. I didn't actually know what precisely we'd be doing for the "cultural component." I was a bit surprised when my guide, Rose, told me why we had stopped at this particular hut. I asked Rose if the doctor performed this service only for tourists or if locals utilized his services. She said locals come to him all the time, and in fact, after my fortune session, she herself took the opportunity while we were there to ask her own burning question:  Will she find someone to marry her and, importantly, will he be a white man or a black man. I asked which she preferred, though I could have guessed the answer … a white man. For some reason, mzungus have a special status in the romantic daydreams of the young, both girls and boys. It was an unexpectedly long exchange (I couldn’t understand in the local language … she had to translate between me and the doctor). It turned out there was an evil ancestral spirit blocking men from finding her, and she accepted a packet of herbs to banish the spirit.

The witch doctor had greeted us as we took a seat in his home. His wife and a couple kids came in to have a look at me and Rose. A naked toddler whose earlier runny nose had dried upon his lip stood shyly in the corner. The other kids said to me the national anthem of Uganda, “How are you, mzungu?” They tried to coax the toddler into saying it also but he simply stared at me, uncertain. Coax, coax. Finally, wordless, he trundled over to me, where I was seated on a low bench, squeezed himself between my legs and wrapped his little arms around my waist, burying his head the folds of my tummy. The doctor had disappeared behind the curtain to gather his fortune-telling materials. We sat and waited at least 15 minutes while I lightly rubbed my temporary child’s soft smooth back and chubby arms, while he stood still as a tree beneath my mzungu hands, his ear pressed against my belly button.

Finally the doctor emerged, the child scampered away, and he lay down on the floor the skin of a young leopard. Around his chest he wore the skin of a black and white colobus monkey, his headdress was made of shells and another animal’s skin. He sat down and leveled a shallow basin of water and rang some cowbells. Then he began a long session of tapping 5 sticks into the water, bundled inside his hand. Alternately, he let them fall into the water to float into a pattern, and let them stand straight up after unwrapping his hand from around them to see how they stood, all the while mumbling under his breath. 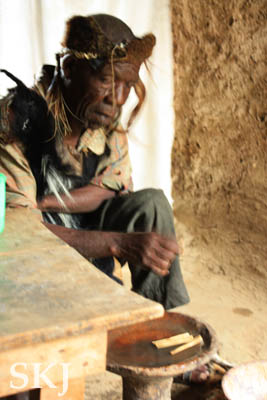 I’ve had my fortune told in other countries by traditional methods. And while I can’t truthfully claim to believe in the ability to divine the future or the problems of an individual by throwing sticks, stones, bones, or animal guts, I must admit to a persistence of eerie experiences. In all cases, these involve things the inanimate objects revealed about me which I did not voice in any way; I wasn’t even asked any question … the objects simply said things. And I’d like to point out that in America I’ve had predictions, profiles and fortunes given to me based on astrology (again no real belief in this, merely curiosity). Nothing remarkable has ever come of that. My experiences in rural villages of the Third World have been far more impressive. And so keeping in form, the first thing the witch doctor told me about myself, he told me out of the blue; in fact, they were the first words he said to me. And they were spot-on.

Further along in the session he keyed into some other interesting notes about my life. In the end, (I might have guessed …) there was an evil spirit blocking one important part of my life. But I didn’t have a problem paying what is for me a pittance to support him and his rag-clad family in their mud hut (in a village of rag-clad, hard working folks in mud huts), and who knows, maybe blowing seeds into the wind and telling the evil spirit to fly away like the grasshopper will remove the mysterious obstacles in my life. It couldn’t possibly hurt to try. He was convinced, though, that only another witch doctor could have activated this bad spirit against me, and wanted to know about witch doctors in America.

Part way through the session, the witch doctor left the room momentarily and returned with a cigarette. A child came in a minute later to light it with a wooden stick freshly plucked from a fire, glowing red with a trail of smoke at the tip. I realized during this interlude that for the first time in 3 days I felt no pain in my stomach. I’d been suffering terrible stomach pain and lower digestive tract issues for the past few days. My body had been kind enough to cooperate sufficiently during the days for me to take a series of treks despite these issues. But the pain had been constant. I went the whole rest of the day pain-free.

I only took 3 photos, which the doctor beckoned me to do and asked that I send him copies. Two came out blurry. And one came out crisp, accompanied by an eerie set of shadows. There is a rational explanation for how this happened, but I’ve never ever had a photo come out like this. Kind of spooky it did inside the witch doctor’s house, looking as if there are spirit shadows in the room. Maybe it's the sickness slithering out of my body! 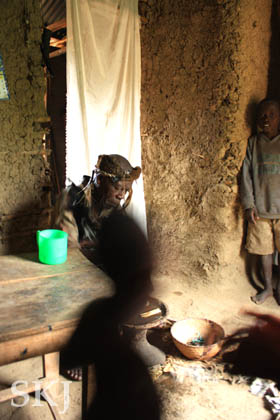 For a more thorough account of my encounter with the witch doctor, you can read the essay I wrote for GoNomad: Witch Doctor on the Moon. (The Rwenzoris are often referred to as "the mountains of the moon.")

Later we hiked up to a blacksmith’s “shop,” which is merely a small thatched hut on the hillside. We watched him and a young apprentice make knives with the life of a tiny fire, stoked constantly by a sheepskin bellows, pumping the two sticks up and down alternately. I was surprised such a modest fire was hot enough to melt metal … metal which they had scavenged in all forms. 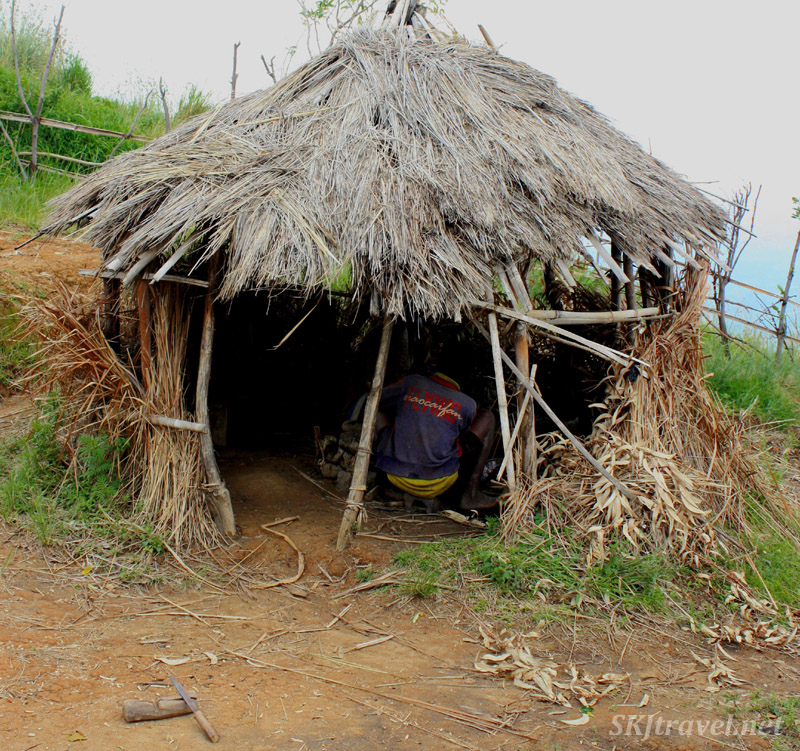 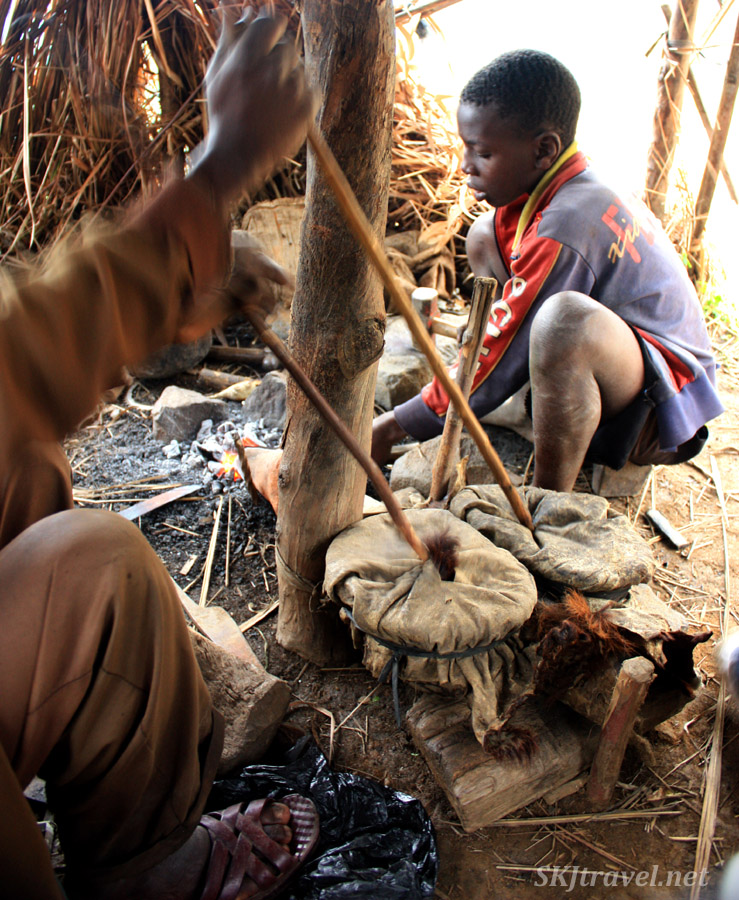 Though popular theories of evolution relate human beings to the primate species, I’m convinced the children here have evolved from goats. They scamper up and down the steep mountainside, treacherously slippery in the muddy rainy season (which I am currently in), with impressive speed and skill as natural as I would walk through a flat valley. The slim paths on the mountainsides linking homes and fields, hilltops, valleys and streams, reminded me of the trail I came down (essentially slid down) while backpacking Torres Del Paine in Chile. I’ll never forget the words of a Frenchman slip-sliding down the trail behind us, “Zat is ze shittiest trail I have ever seen!” But owing to the width of that mud-slide, I think the kids of the lower Rwenzoris would have found it an awesome 4-lane highway and would have been dumbstruck by our curses. 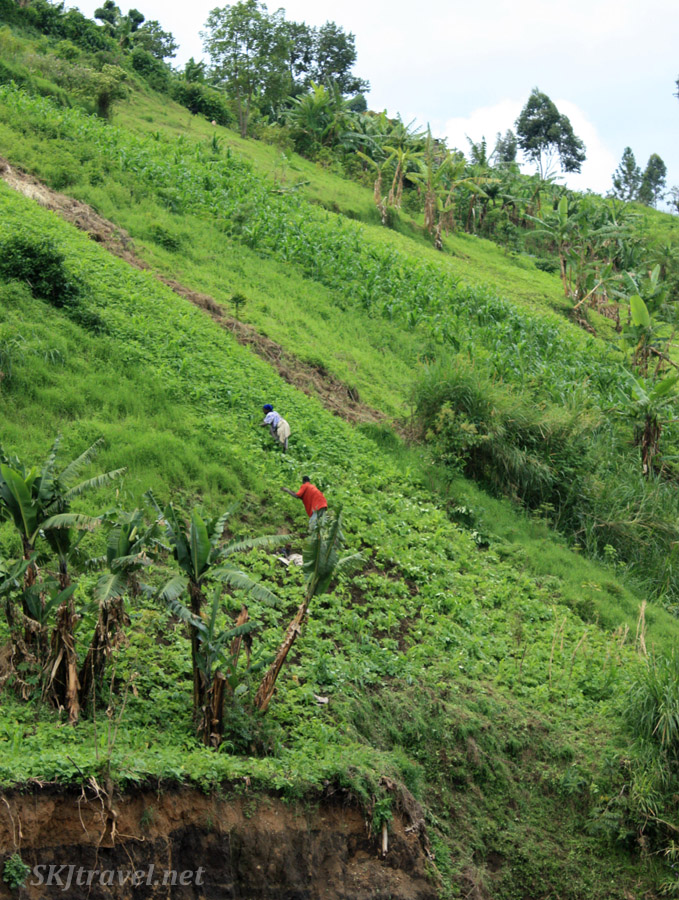 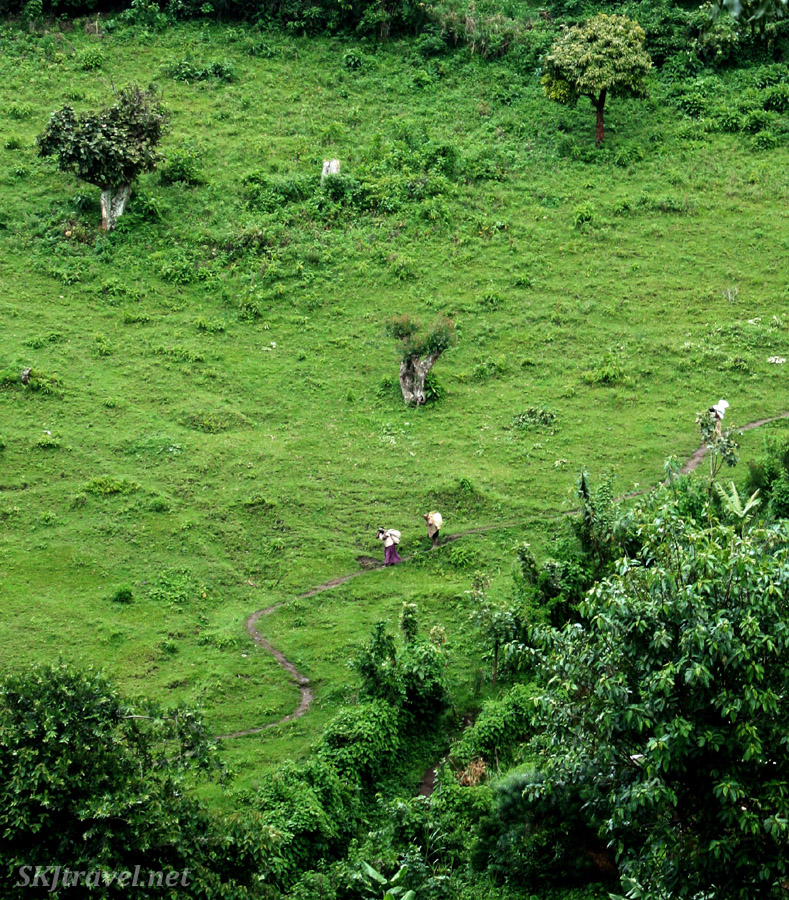 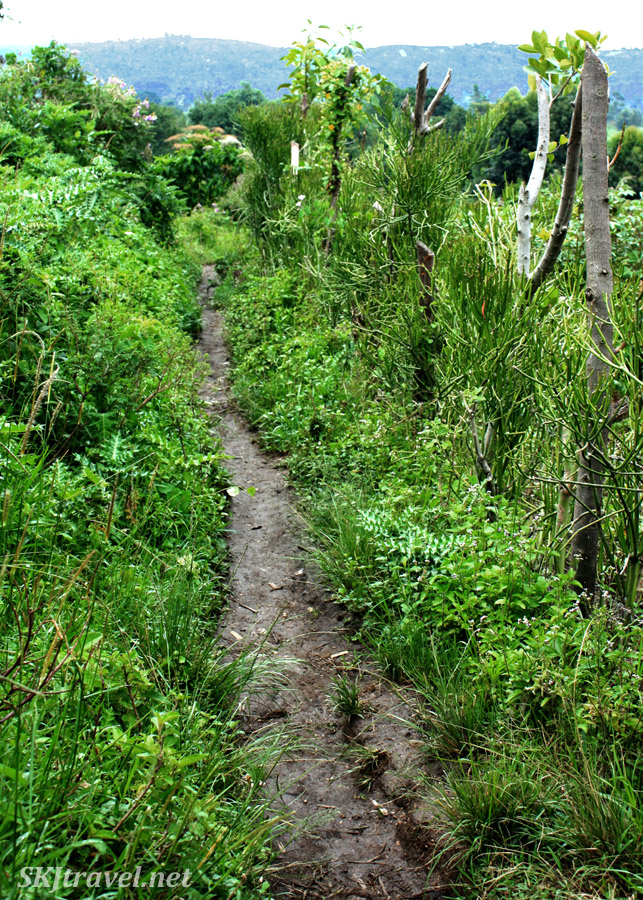 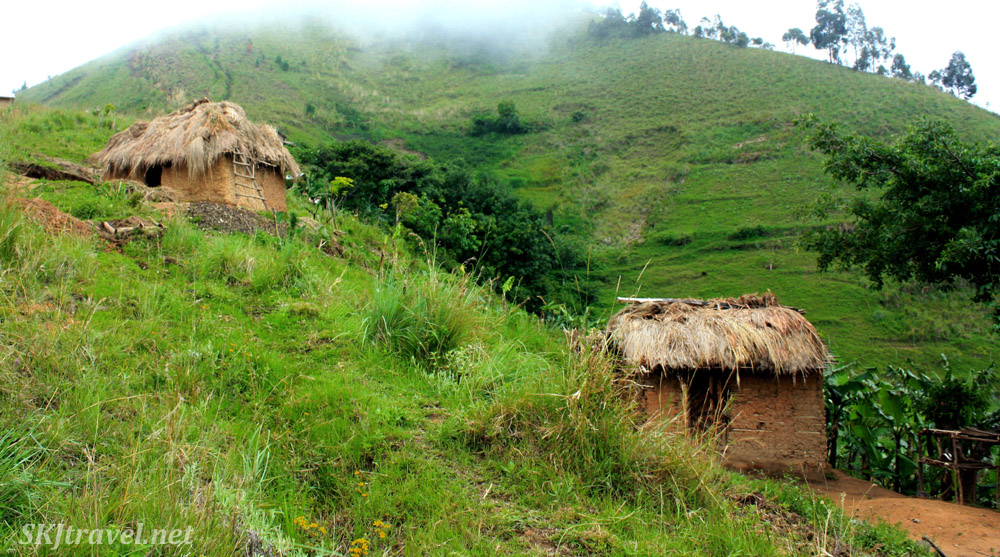 To finish the pleasant day, which had been enshrouded in fog and heavy with a wet chill, mysterious with sticks and divinations, as my guide and I finally reached the milder topography of the land just above the valley, a villager came upon us and followed behind whistling with perfect pitch and an impeccable sense of melody, “Rock of Ages.” Rock of ages cleft for me … I know it is to refer to something else, but for me, passing through those ancient mountains sustaining an ancient culture which has carved its homes and fields, its families and traditions into the these rocks, forged with the bellows of time, it was a song reinterpreted for my personal conviction of what life and spirit are about. 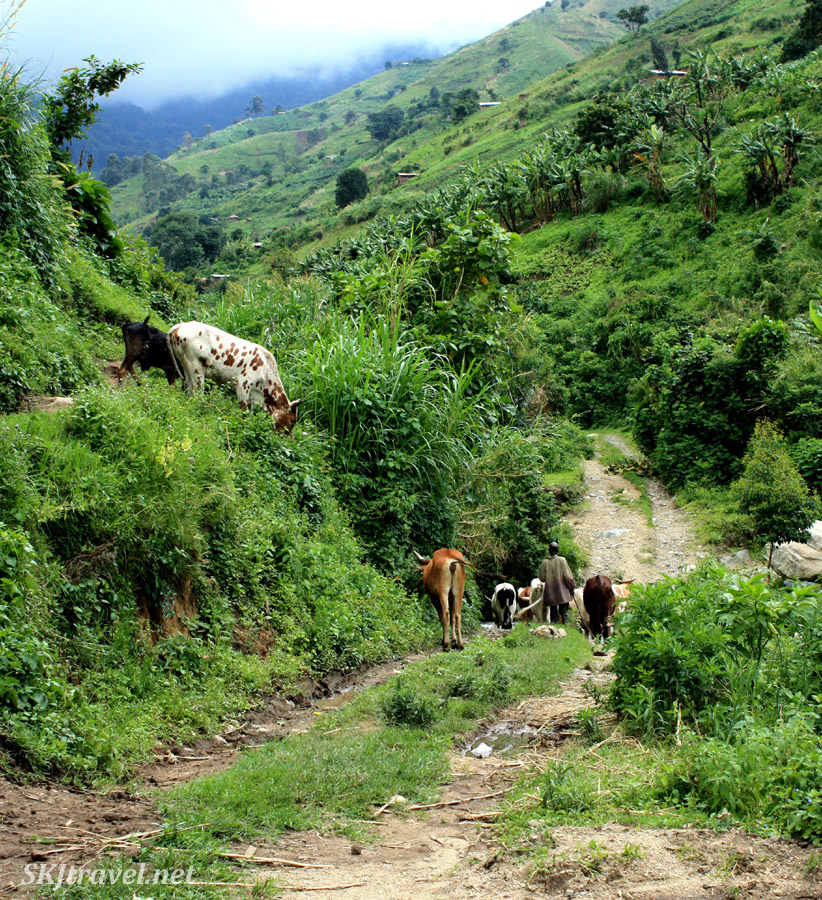