Continuing our little safari in Etosha National Park in northern Namibia ... (see the last two installments: "Birds and Those With Patterns" and "Wanna Tussle?") now we'll visit another category of creatures ... those with tusks or horns ... in other words, those with sharp pointy things growing out of their head somewhere. Tusks grow from the mouth, they are essentially massive, elongated teeth; and horns grow from the head and are are essentially crazy fingernails -- made primarily of keratin, the same as nails and hair. I guess technically, they would be "headnails."

We might as well start with the big boys! The animal above which I love few others -- elephants! Those who have had the increasingly-rare privilege of living to old age are often called "tuskers" because of their large tusks ... they keep growing over the lifetime of an elephant. One of the most beloved beers (a lager) in Africa is Tusker beer. :) Naturally, I would know and be familiar with a side note involving beer! The first pic below kind of gives a sense of how the elephant really towers over his savanna mates. An oryx by itself (the creature facing us) does not seem a particularly petite animal. But he looks more like a toy standing near an elephant! 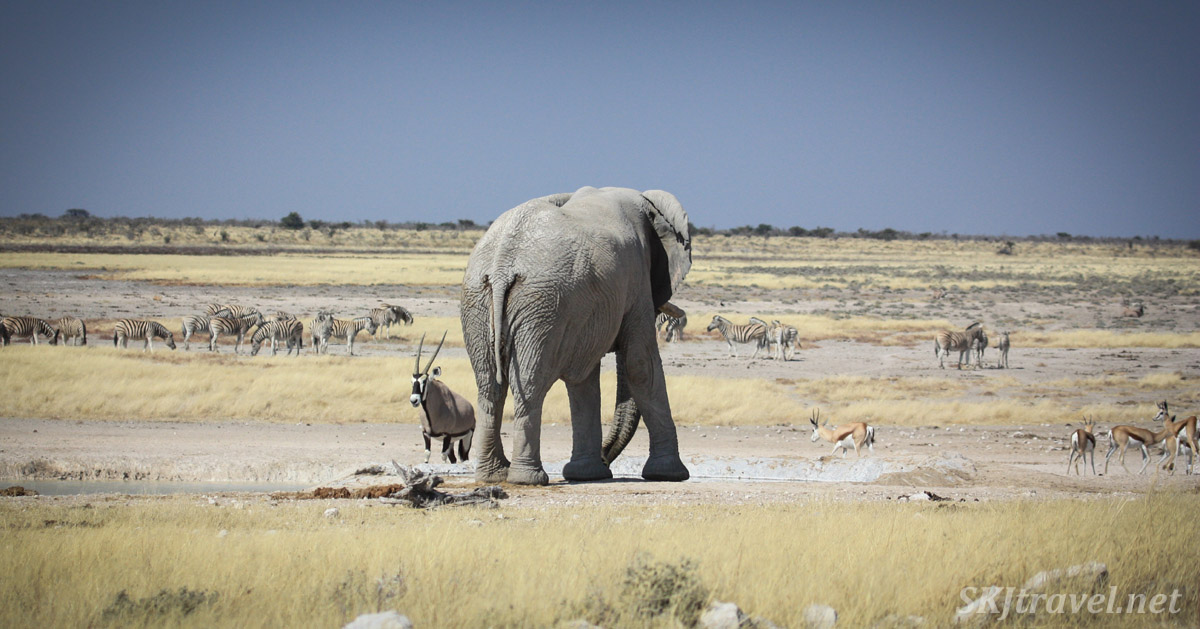 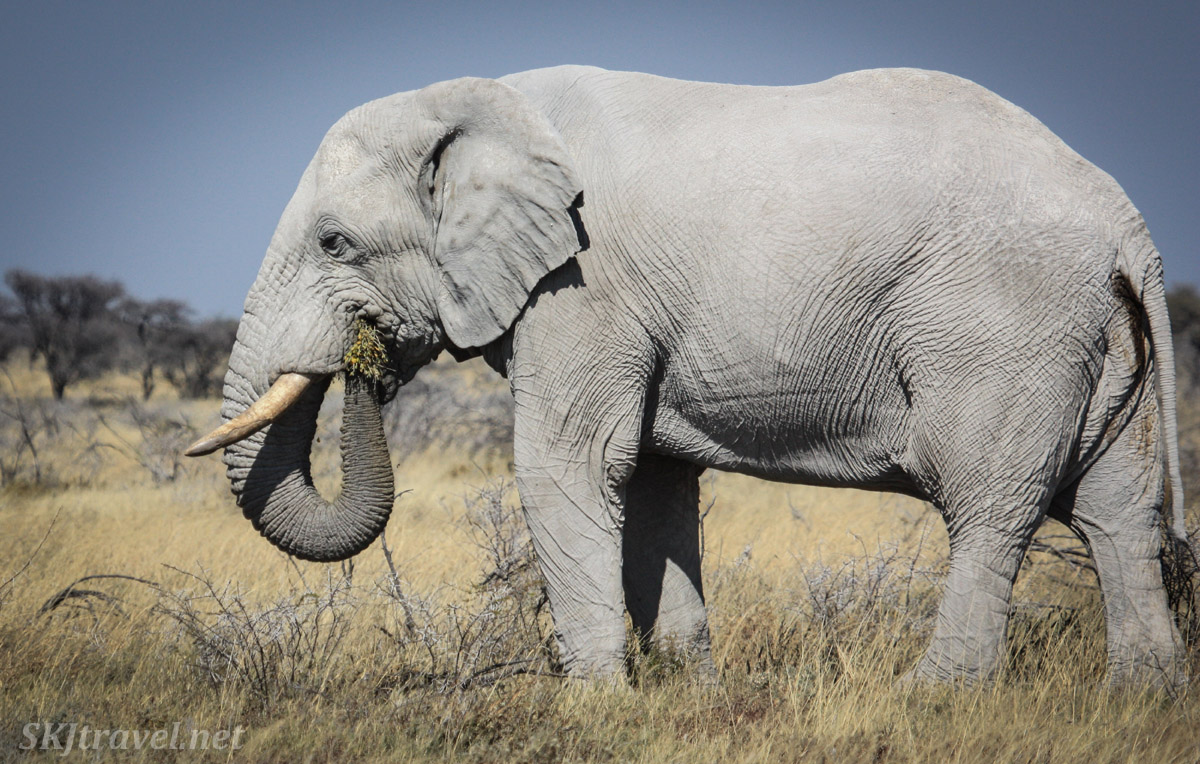 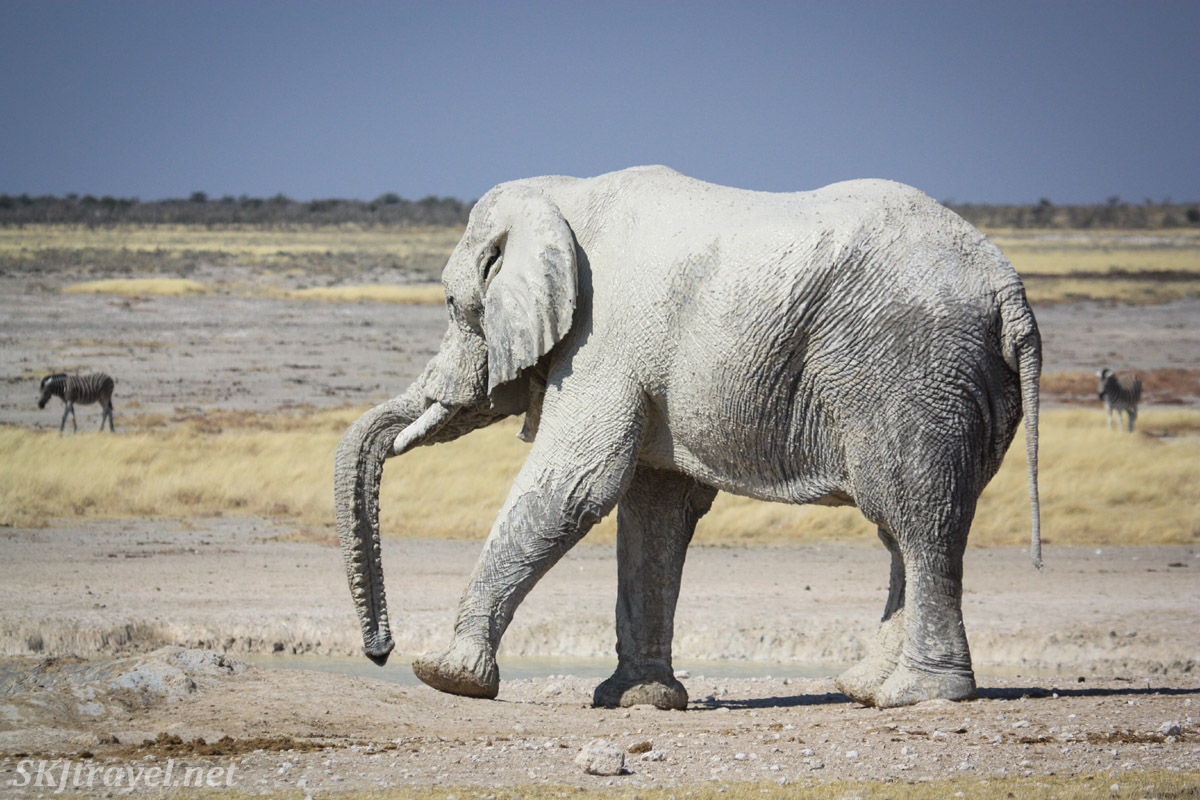 An elephant trunk has a staggering number of muscles. Typically literature will refer to either about 40,000 or well over 100,000 ... it depends on how you are classifying the muscles, whether larger muscle groups or individually. You get the idea either way, that the trunk is an appendage over which the elephant has exceedingly fine motor control, and with its prehensile tip, it can be used to do everything our human hands can do and then some. For example, we cannot store water inside our hands! Trunks are perhaps the most topographic and textured limbs on any mammal, and I think they are one of the most fascinating things one could occupy their time with watching. 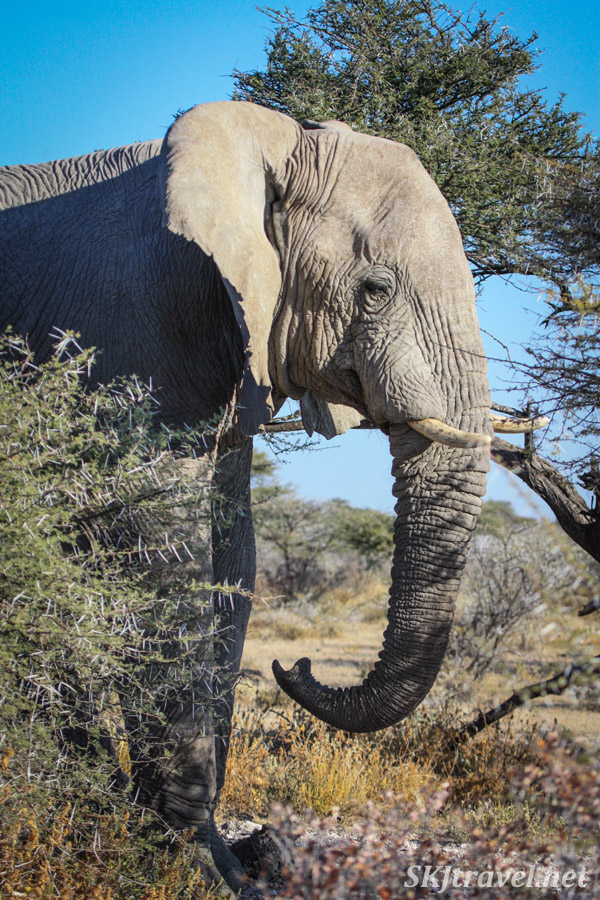 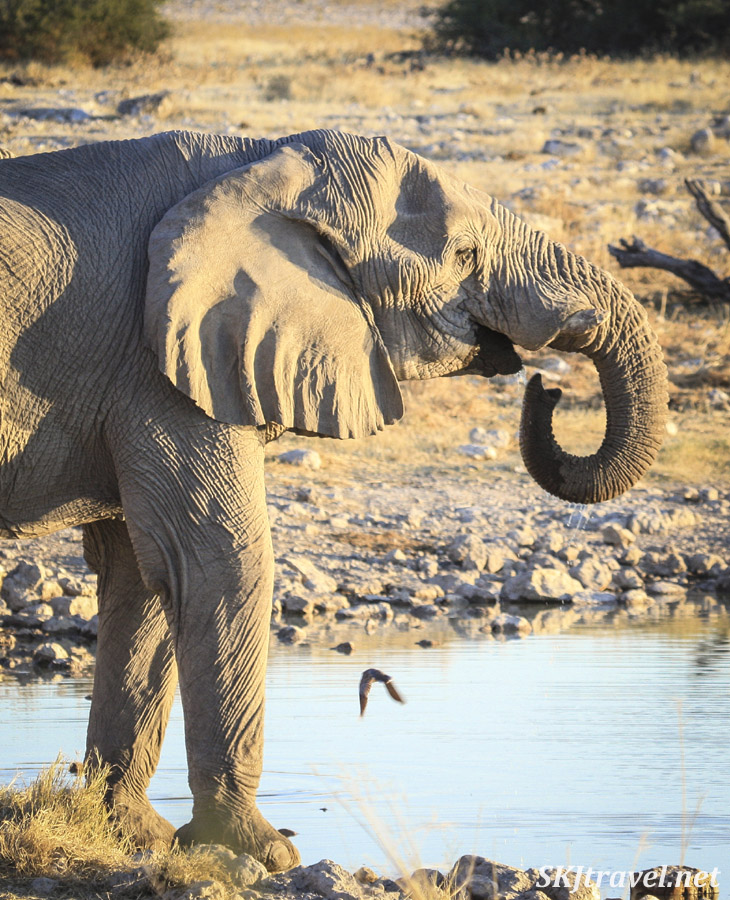 In addition to sucking up water to release in their mouths to drink, with its Hoovering power they can also suck up water and mud to spray over their bodies in showers and mud baths. The dirt in Etosha is often a light grayish or chalky color. This guy is really giving himself a power wash! 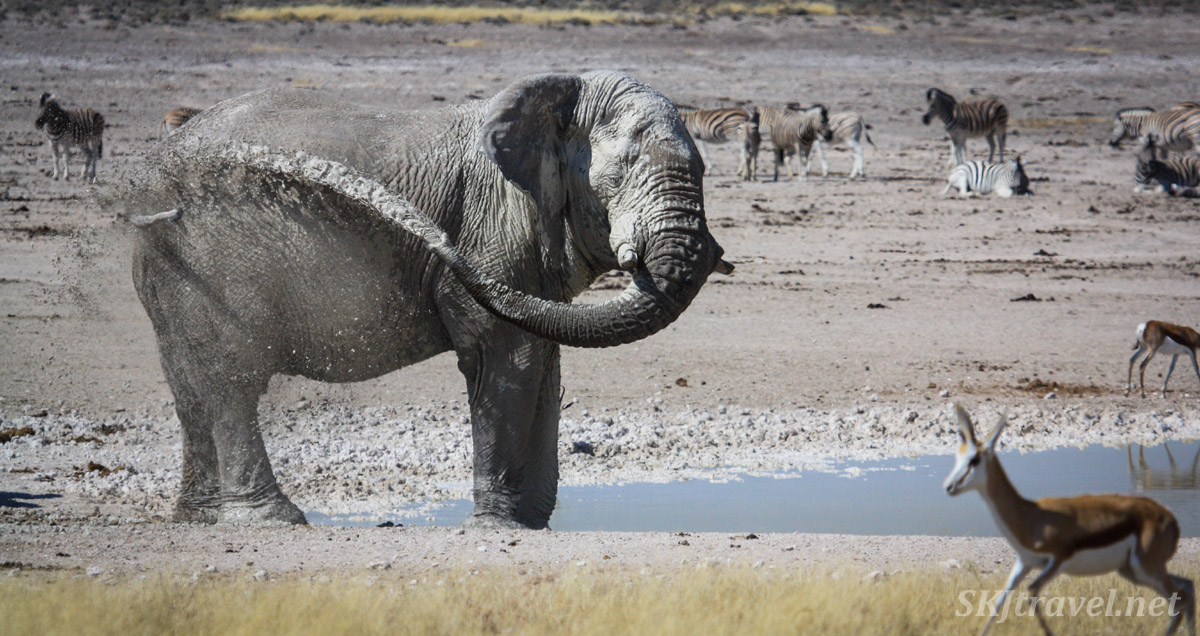 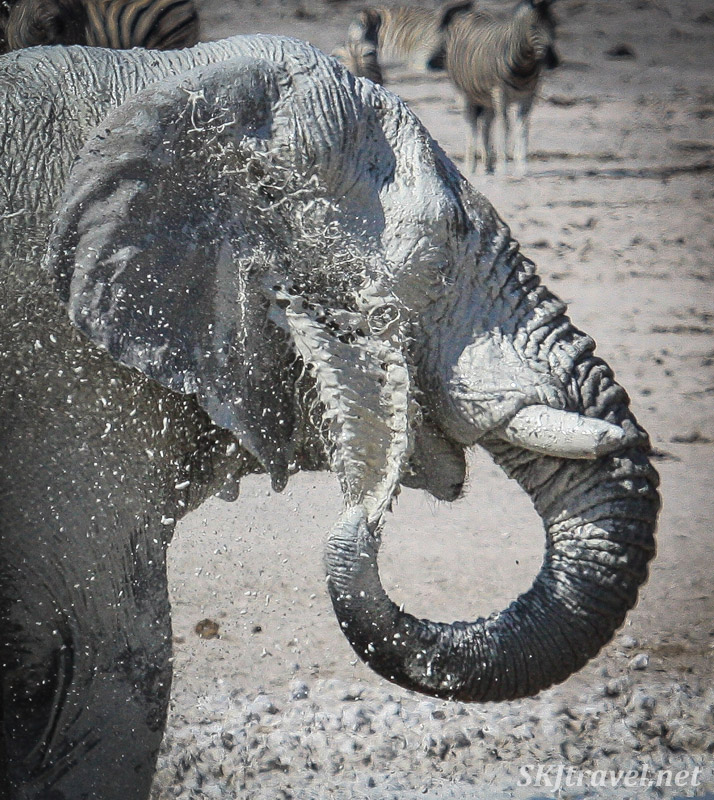 Here is some interesting behavior we observed ... this elephant was eating a termite mound. First he curled his trunk all around it, investigating it and almost seeming to caress it. Then he opened his mouth and started nibbling off the top of it like it was an ice cream cone. 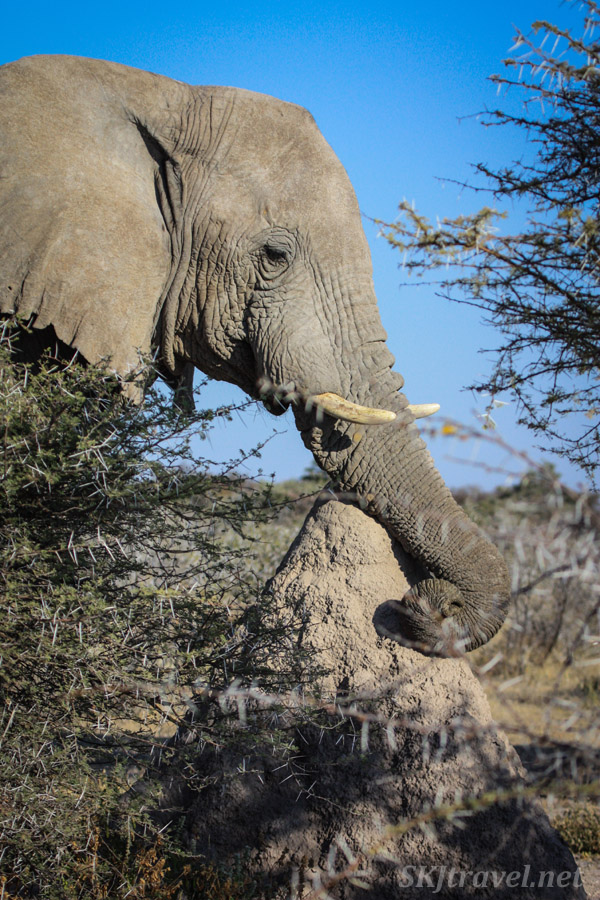 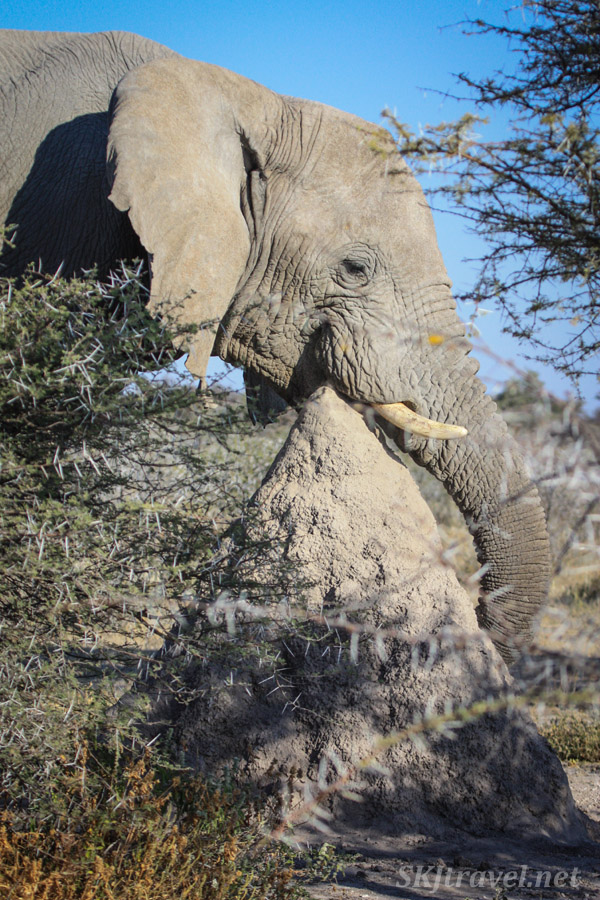 As sweet and loving as this pose below looks, it's actually two young males practicing their sparring skills. Though they were tussling (see more tussles), it was not aggressive ... sort of that line down the middle between play and fight. 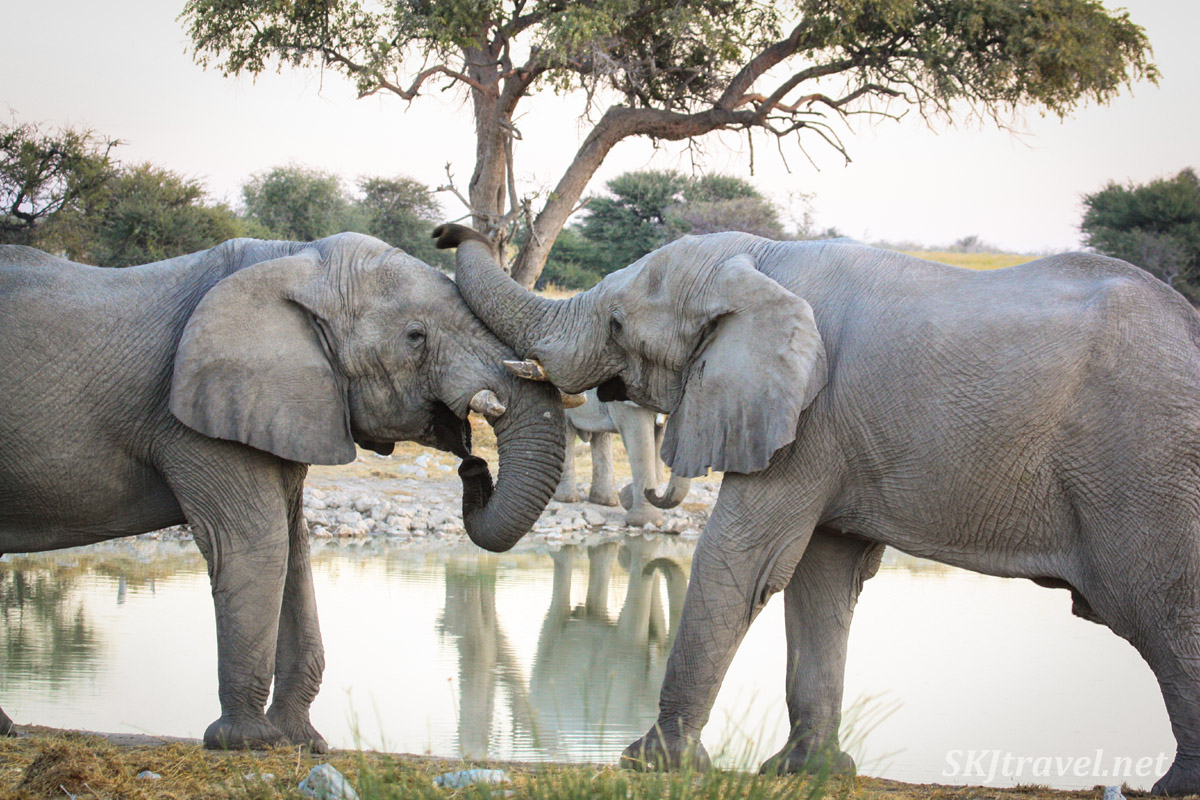 And now a much smaller critter with no less impressive tusks relative to their body size ... warthogs. Like elephants, both male and female warthogs have tusks. Besides looking for the requisite junk to determine the sex of a warthog, you can tell a difference by their faces ... down by the jaw, males have a third set of lumps -- the "warts," for which they are named. (This is similar to sexing a giraffe by the little horn nubs on their head ... the older males have a second set.) The warts are not actually hard solid growths, they actually store fat. 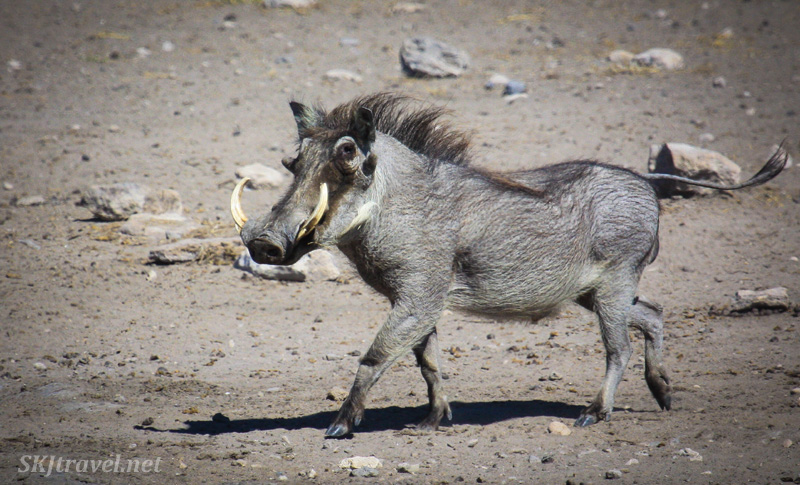 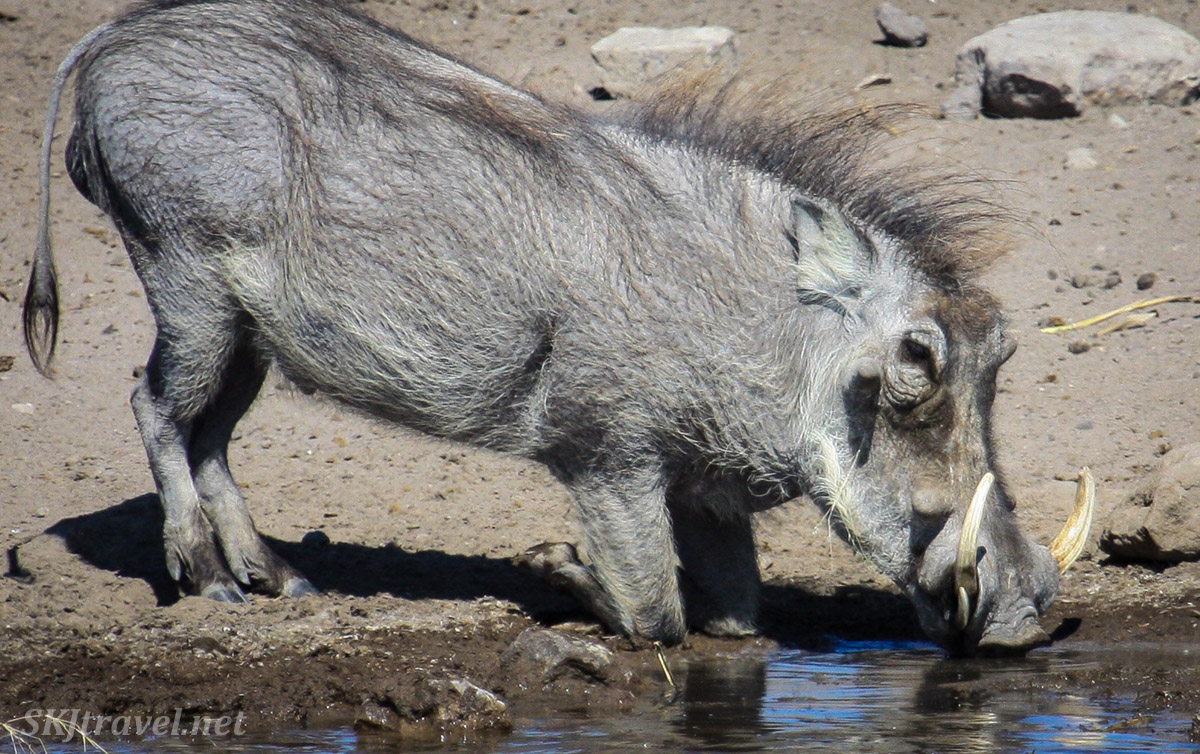 Moving on to critters with horns ... Horns are one of the methods Mother Nature uses to express some of her whimsical creativity. A lot of people on safari kind of overlook the antelope species, perhaps because they are typically relatively plentiful and don't have as unique or endearing characteristics as the iconic mammals of Africa -- elephants, rhinos, cheetahs, etc. My favorite antelope species is the kudu. Their corkscrew horns are magnificent. I just can't help imagining if the keratin growths on humans came in such wicked lengths and shapes as the keratin growths on antelopes. Imagine having corkscrew fingernails! haha. 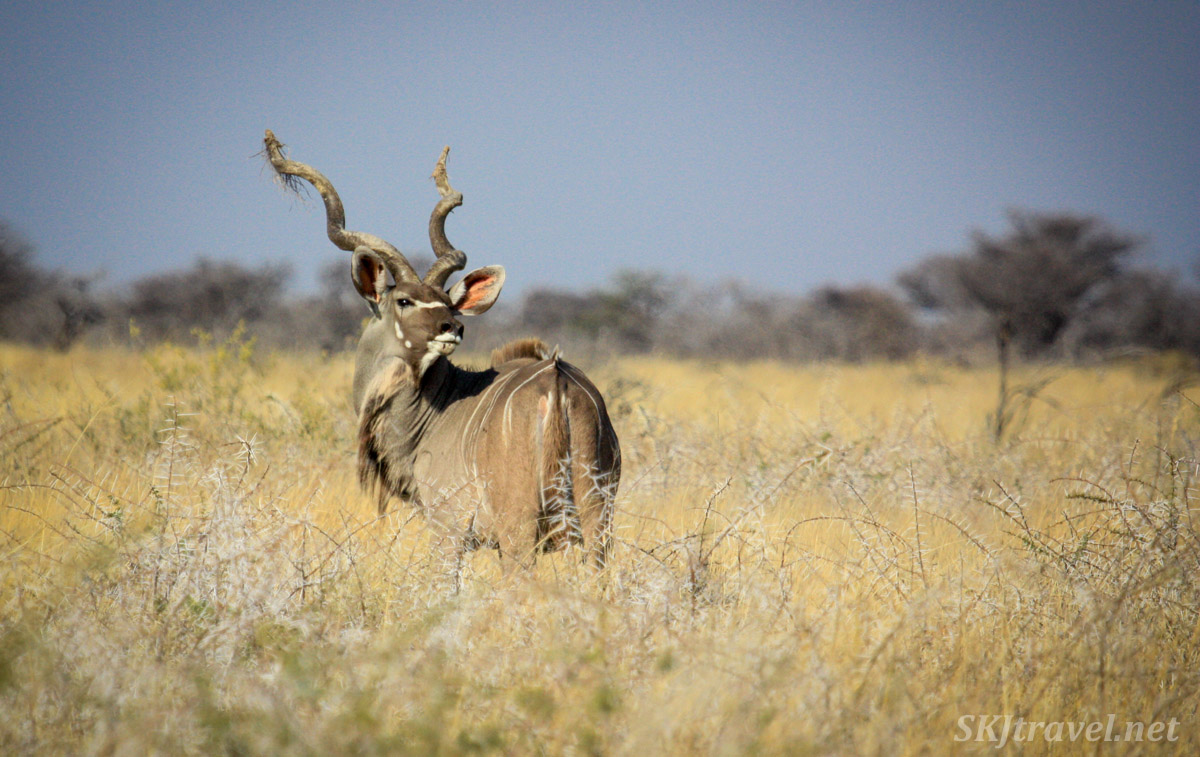 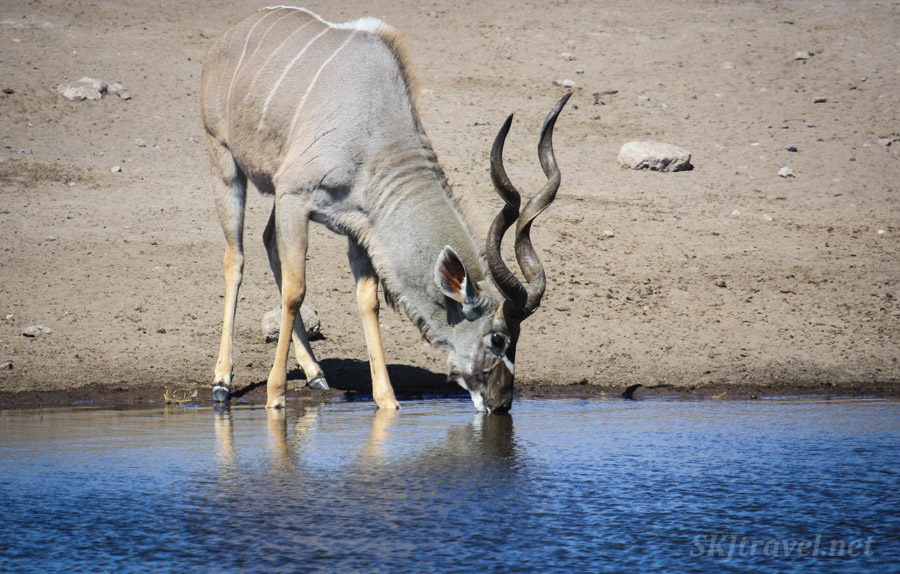 The oryx have impressive horns, as well. Their shape may be nothing to write home about, but the length can be impressive indeed. Because of these great spikes on their heads, they make kind of an epic outline on the flat grasslands (giraffes are the only other animals about which I have this epic-on-the-savanna impression). 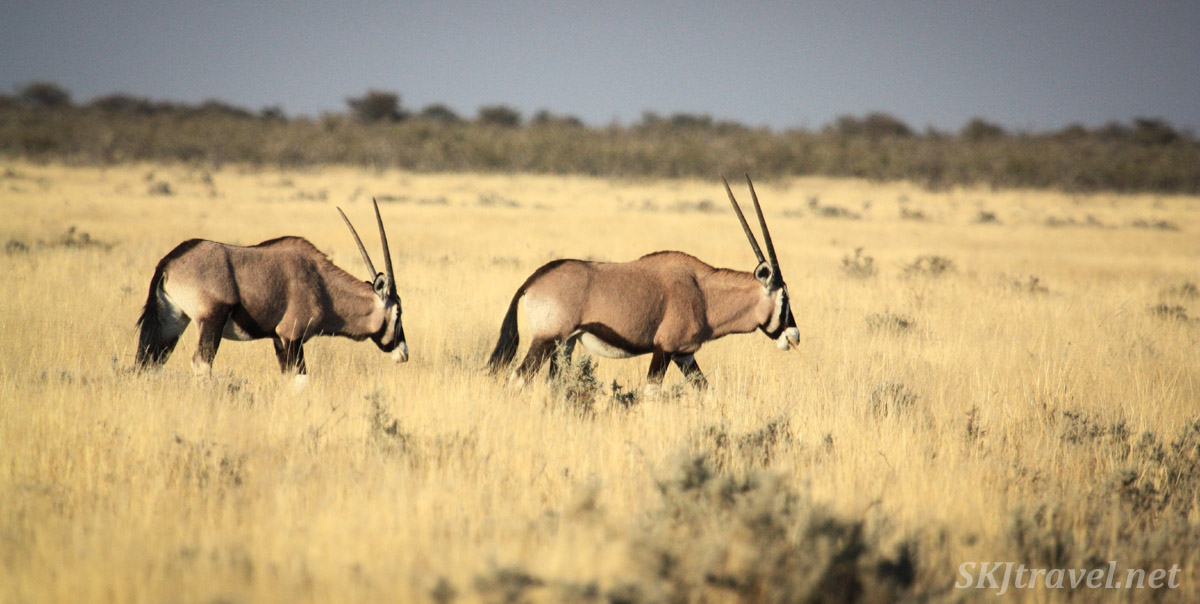 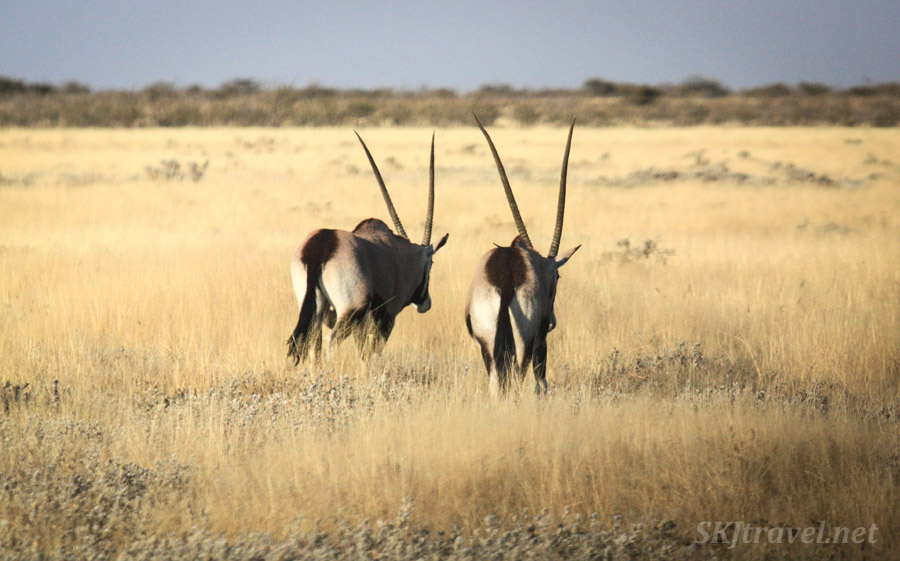 I've never seen a black wildebeest, whose horns orient a little differently, but blue wildebeest are one of the most popular animals on the plains. Of course, probably the most famous event in all of Africa is the wildebeest migration up in Kenya and Tanzania. This isn't that exciting of a photo, but it's one of the very few I've taken in which the animals' faces are somewhat visible. So often their dark snouts and eyes make them look like faceless black masses. 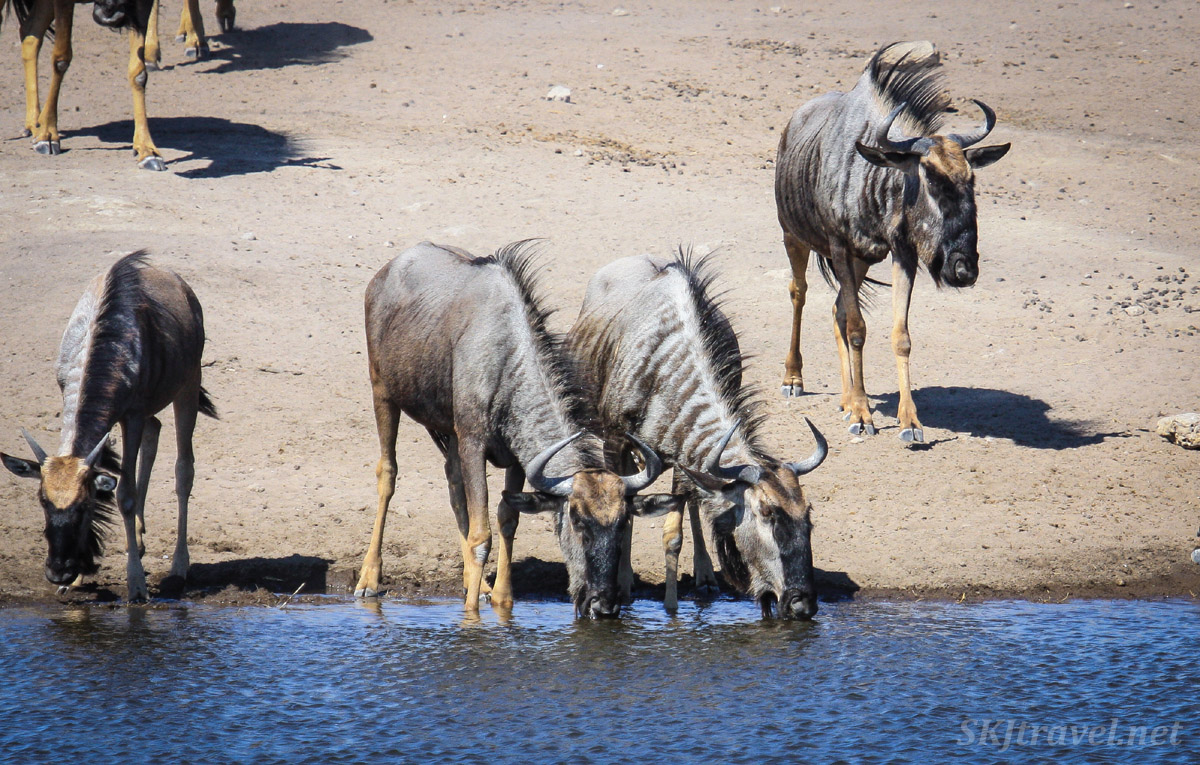 This is one of my favorite photos just because it shows three very different antelope species getting along just peachy-keen fine. If only the human species were as tolerate and friendly as the antelope species. My favorite safari pics are the ones with multiple species in them. 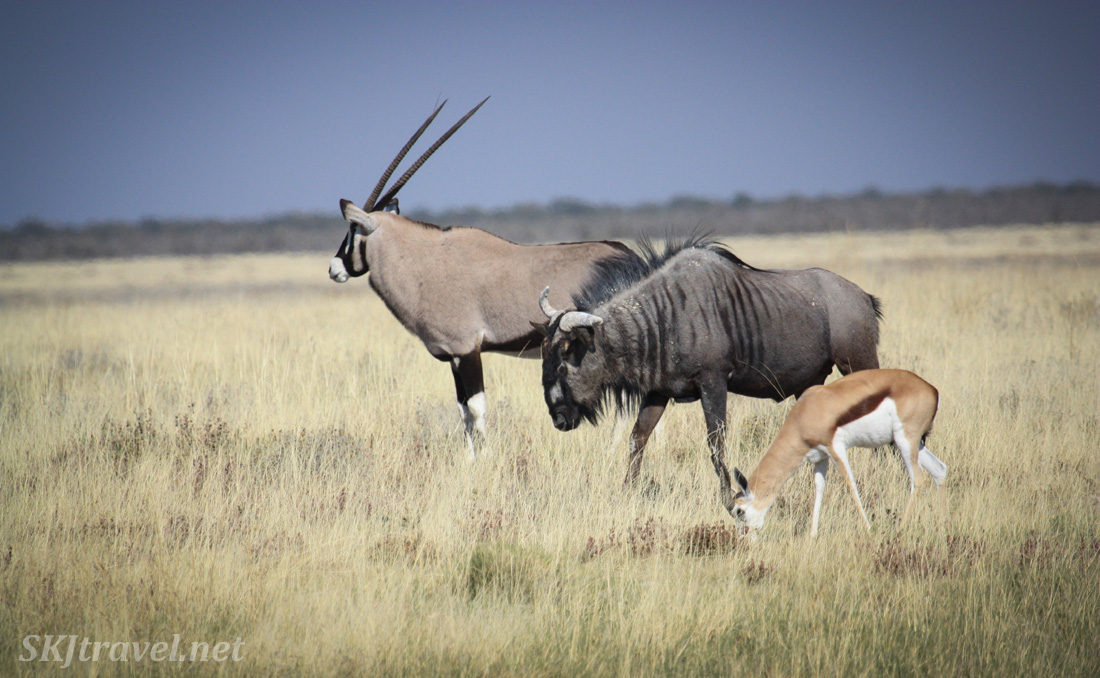 Springbok are sweet little antelopes. One of the few antelope species in which, like wildebeests, both males and females have horns; the female's just tend to be smaller and daintier than the male's. This was the most plentiful species I saw in Etosha. 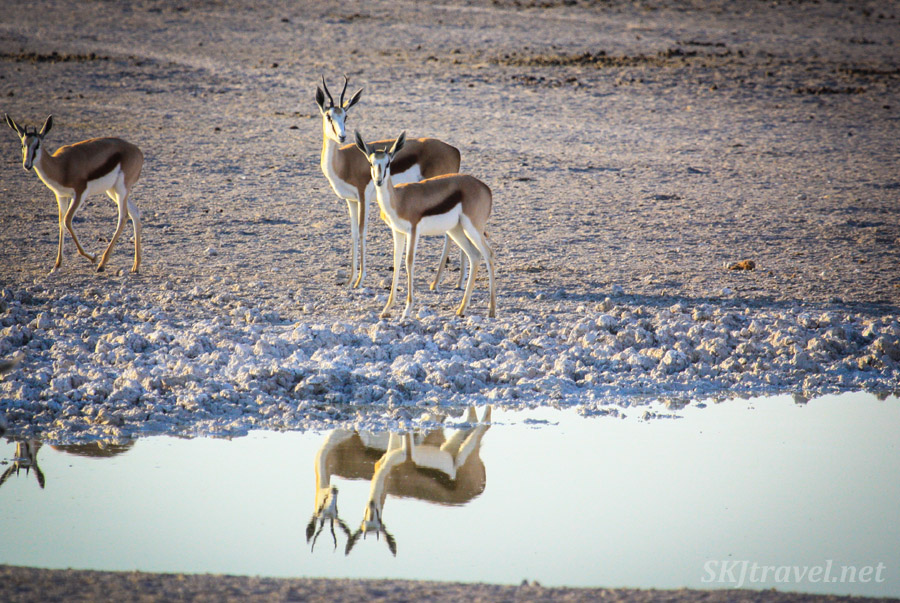 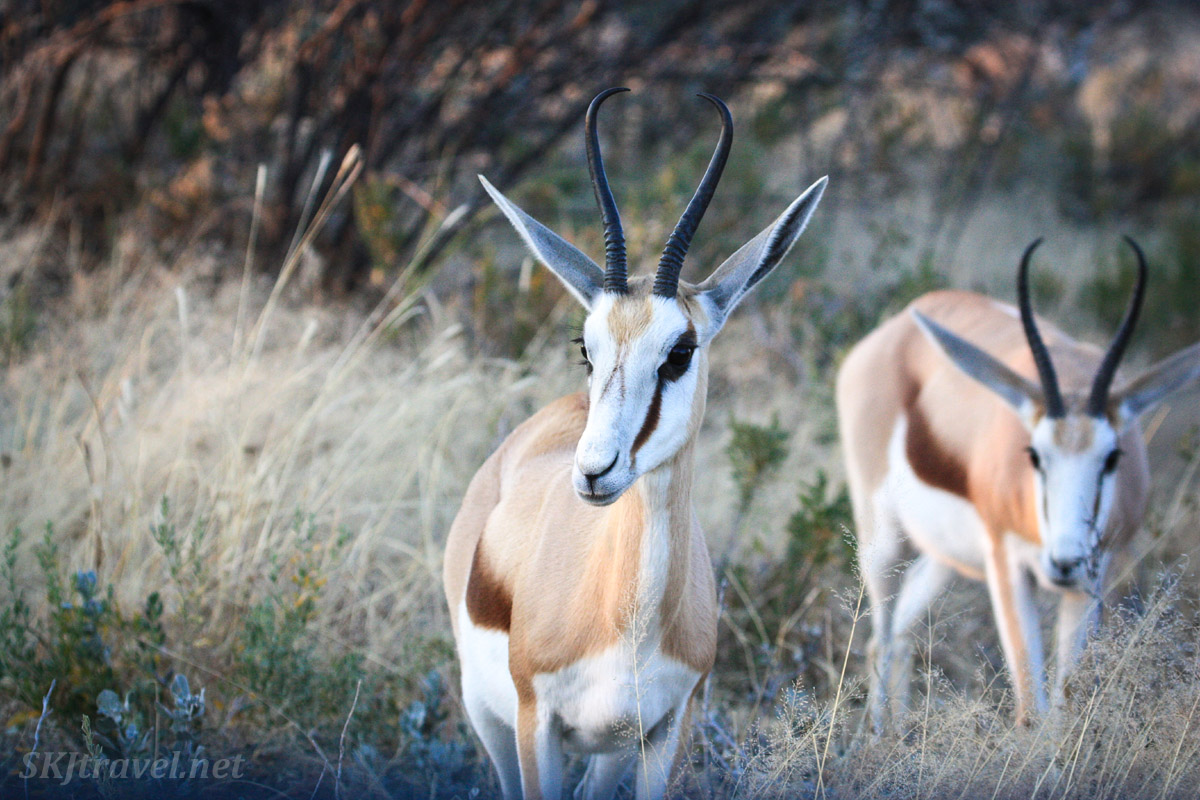 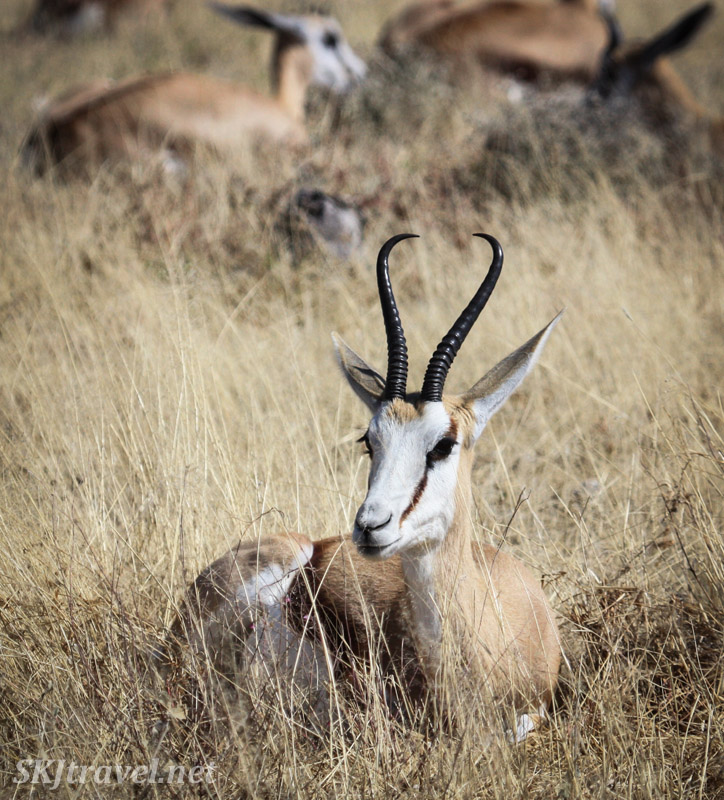 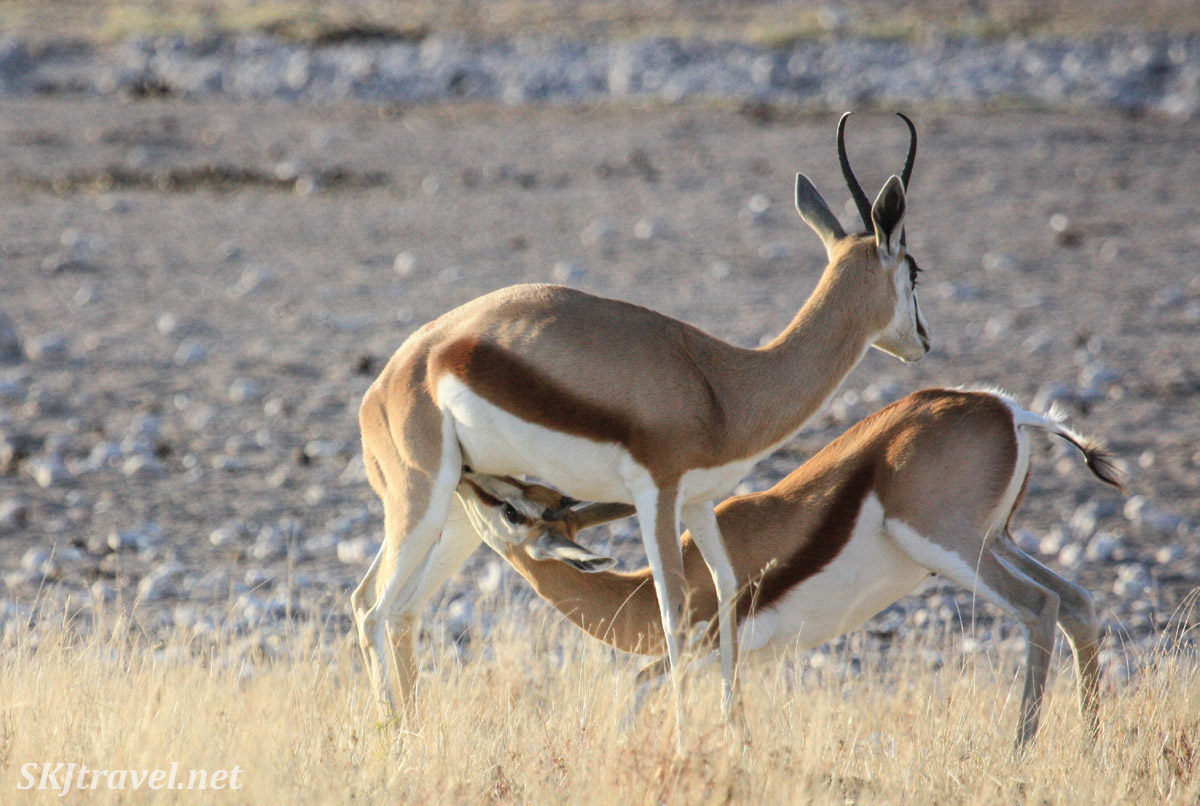 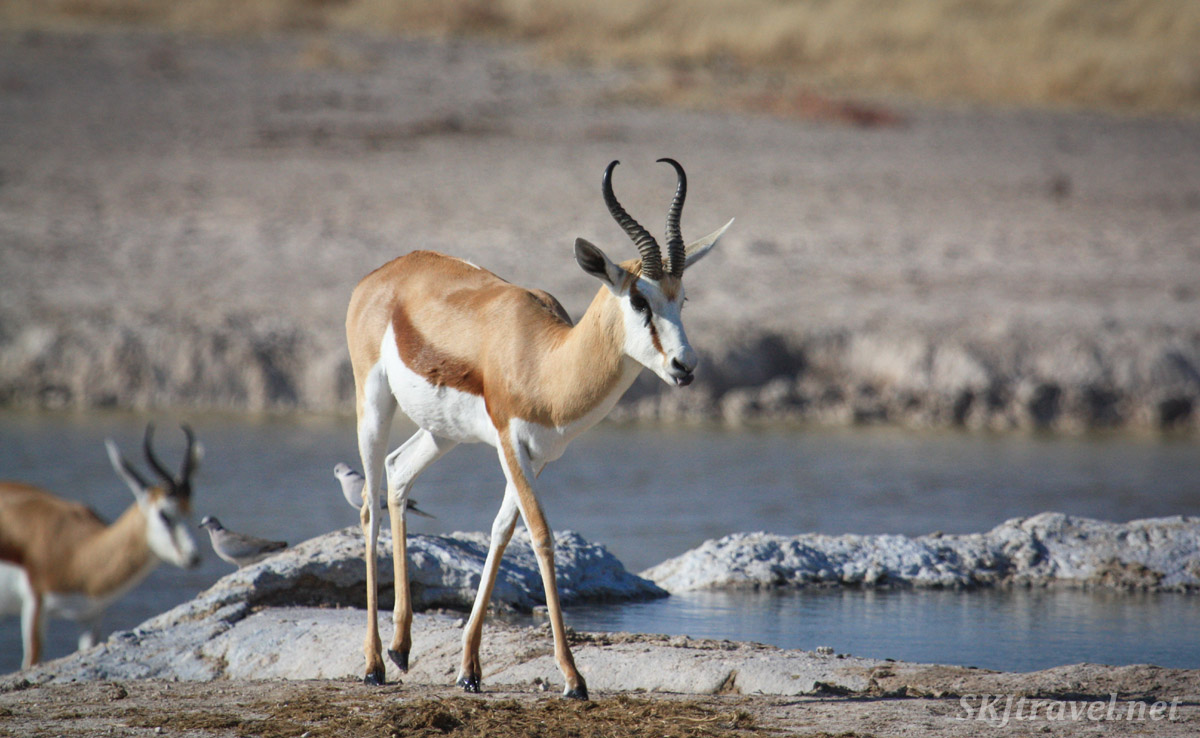 Below, we have a female black-faced impala ... these are actually a different subspecies than the common impala, and an endangered one. If you see a pic of one of these, it likely came from Etosha, their main stronghold. But apparently the population in Etosha is still only a little over 1,000. However, the Etosha population began with only 300 animals relocated there from elsewhere for their protection. So though there are more depressing stories of species losing the conservation battle than you can shake a stick at, this one is a success for Namibia. 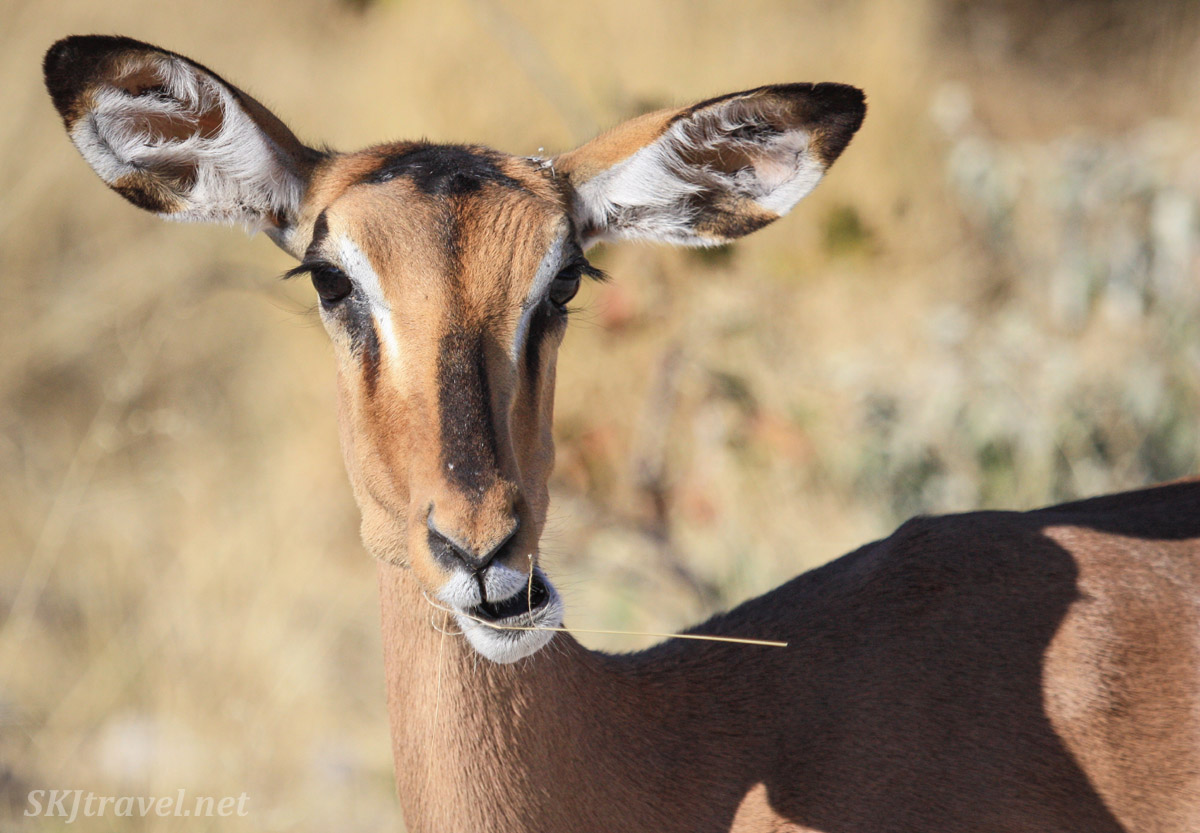 It's an increasingly special experience to witness a rhino in the wild. I count myself extremely fortunate to have spent loads of time around primarily white rhinos, but also some blacks, in South Africa. And we saw this fellow, below, two days in a row in Etosha. For more on rhinos, including this guy and photos of the little tyke I saw in Etosha, see my "It's Come to This: Saving Just One Rhino" post. While it was nice to hang out with this black rhino, he unfortunately was not very healthy, he had been in a fight and was beat up pretty bad. Our guide didn't feel particularly optimistic for him. But we did see several other healthy ones at the water holes associated with the park camps. 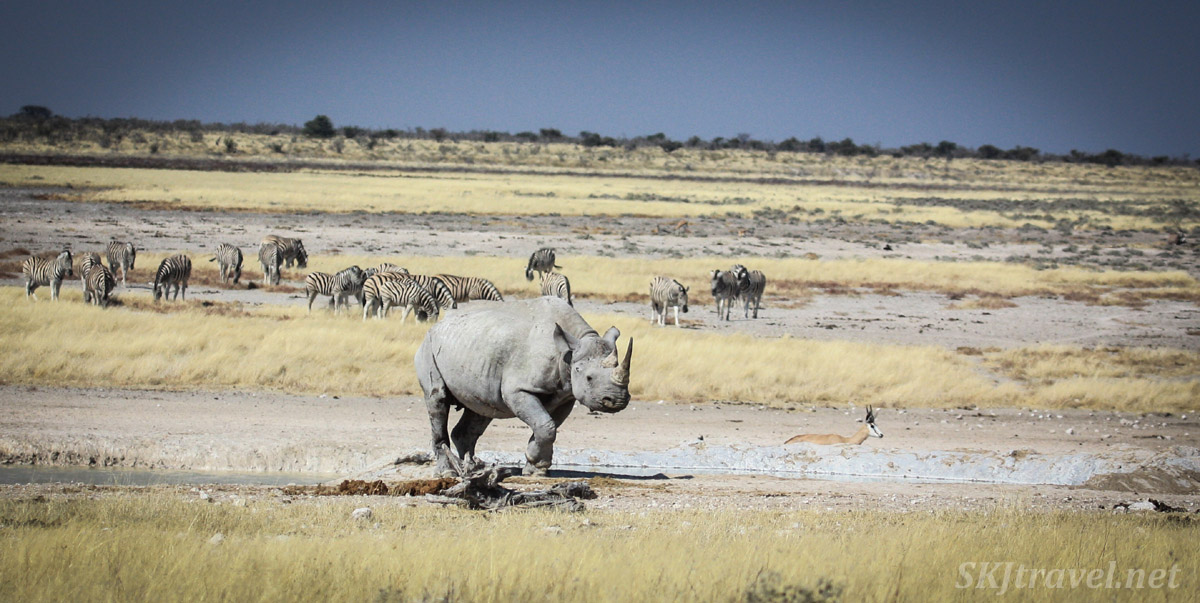 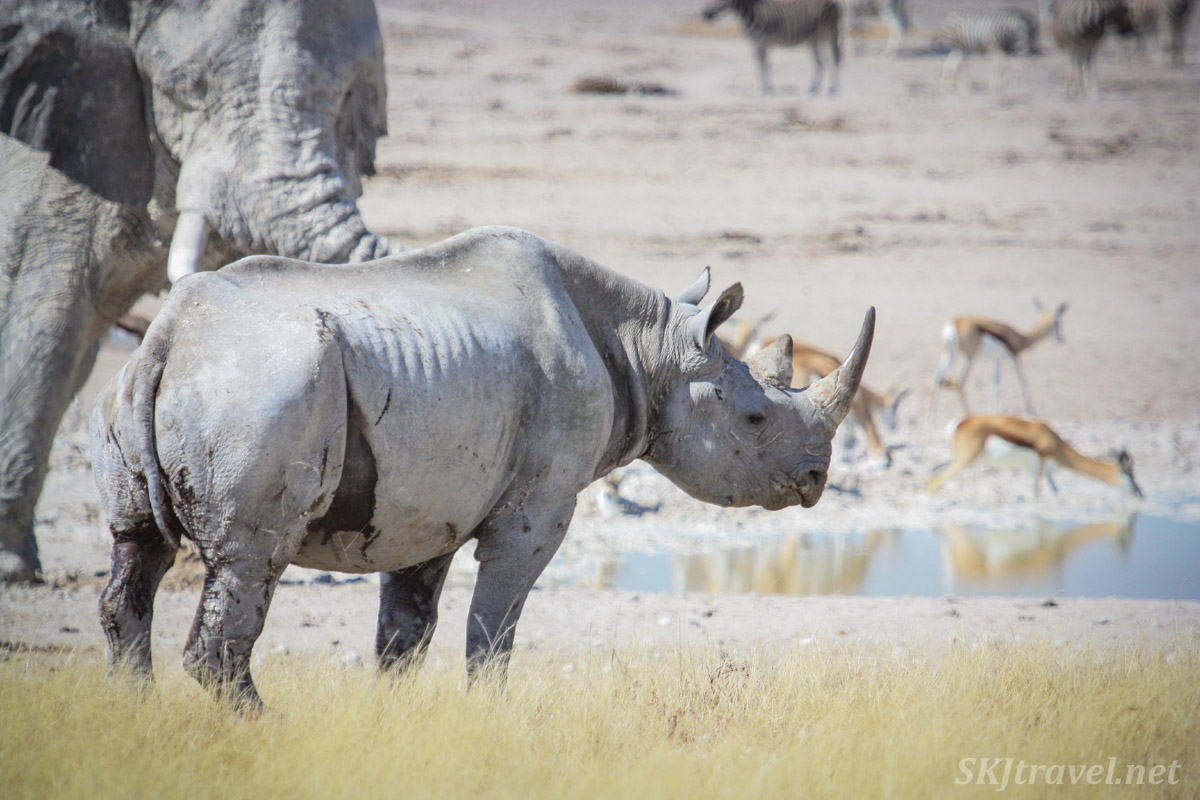 African safaris are not cheap. Especially if you have to fly in from another continent. As with any type of travel, there are certainly more and less expensive ways of doing them. But when I encourage you and anyone else who has never been to make a safari a priority in their lives, I'm not flippantly assuming you all have buckets of money. I myself certainly don't! I realize most of us have to make decisions and priorities in our lives. For me, it's worth not eating out at restaurants at home and not seeing movies in the theater and buying my clothes second-hand to spend my resources instead on being in the presence of these majestic and unique and ancient creatures. And every year that passes I feel more and more drawn to them as their time on earth becomes steadily more precarious. I think that if I had infinite amounts of money, I would pay for everyone on the planet to go on just one safari and see these animals first hand. In my little private Utopia, this would result in the evaporation of indifference and apathy toward the welfare of these animals, which would necessitate solving the underlying problems that threaten the wildlife's continued existence, primarily the eradication of the endemic poverty of the people who live next to the national parks established to protect the animals. As it currently stands, very few of those native people receive sufficiently tangible benefits from the parks they (a) cannot even afford the entry fee into, and (b) are supposed to respect the resident animals of, while their family is destitute. The buyers of poached animal parts most definitely can easily make a choice whether or not to buy them, and carry a moral responsibility not to. The people who desperately need to feed their hungry family ... their choices are not so easy and clear.

But lacking the magical infinite pot of gold ... I hope you enjoyed following me on vicarious safari. :)  Now we will enjoy our cold Tusker beer as the African sun pulls a sky of stars behind it as it sets. 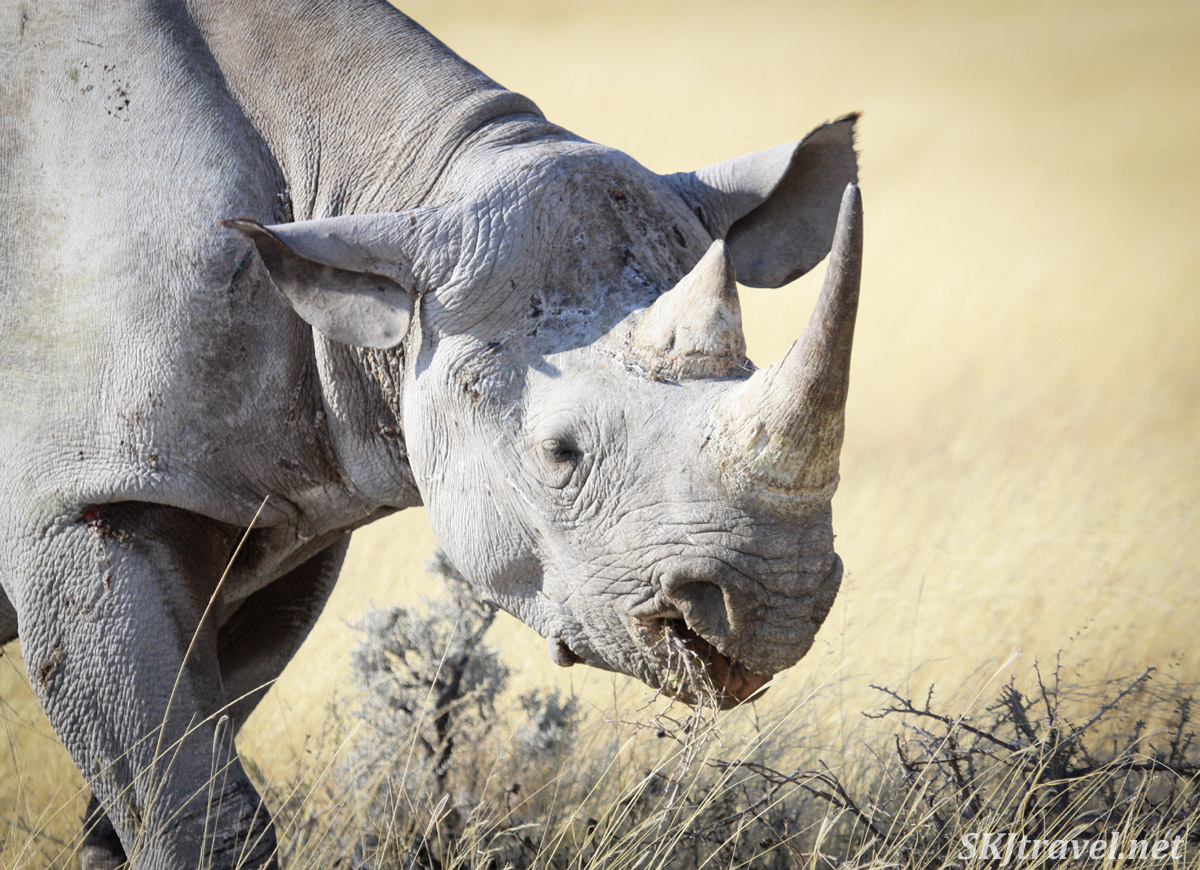