Cozy in Person! - A visit to Chimp Eden

Now we’re at Chimp Eden! This is one of the things I’ve been most looking forward to, as we are big fans of the Animal Planet TV show, Chimp Eden, chronicling the chimps and how they were rescued and brought to the rehabilitation center, a center sponsored by the Jane Goodall Institute. I can’t wait for the tour tomorrow.

This morning we went for a hike in pretty country, still in Swaziland. Part of the area looked like a well-designed rock garden, really amazing. Then drove all the way to a northern exit in Swaziland. From Pigg’s Peak all the way to Bulembu, an area basically deserted, on beautiful road. Some of it rough but the whole way from the border post to Barberton, 40 km, was pristine pavement, gorgeous twisties, and zero traffic. Literally we never encountered another passenger vehicle in either direction. We had crooned over the minimal traffic in Slovakia last year, but traffic in South Africa is an all-together different story. Our experience so far, outside the major urban areas, is no traffic. Traffic isn’t even a meaningful term; better to say simply there are no cars, very very few.  Anyway, Erik and I were wiping away the drool from the corners of our mouths thinking about having a sport bike right now to ride the road from Bulembu to Barberton over and over…. What a thing of motorcycling beauty.

The border post there was such a relief from the ones we went through to cross Mozambique and to cross into Swaziland in the south. It was 2 tiny buildings and 3 guys who were bored stiff and were thrilled at the prospect of being able to search someone’s vehicle … though the search didn’t last long at all. On the Swazi side, the immigration officer wrote a note on a piece of paper and asked us to give it to the officer on the South African side. I couldn’t help but read the note while it was in my possession. It said: “The electricity will be off tomorrow between 9:00 and 16:00. You can come over here for more information.” I just found this amusing. I meant to take a picture of the quaint little border post but forgot. We were the only people there, it was so refreshing and simple. Below, the buttery mountains at Bulembu. (Erik said they're so rolling and smooth like butter) 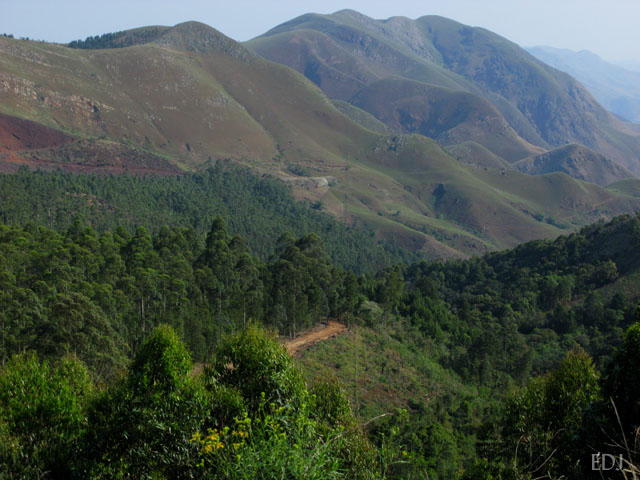 We’ve met very interesting people here at Chimp Eden. One is the proprietor of the hotel (swank and lovely…. we feel very upper class tonight) and one is the bell boy/errand man/waiter.  The proprietor was kicked off his family’s game reserve in Zimbabwe, land they had lived on for over 150 years, when the chaos broke out there in the mid-2000s. (If you’re unfamiliar with the events under Mugabe, “When a Croccodile Eats the Sun” is a good book to read.) He and his family darted and loaded up the animals in trucks and drove to a lake on the Zambia border where a friend owned lakefront property. In the middle of the night, they loaded animals on a boat and secretly ferried them across. Now they’ve got a nice reserve in Zambia. But his tale of the trials his family went through in Zimbabwe during the recent Mugabe years and the Wovits campaign, plus the adventure of moving all the animals, and his personal take on animal conservation based on his experiences was all very interesting. It’s great to have conversations with people like that.

The next extended interview came with Robert, the man of all trades of the hotel. A black man of 63 who doesn’t look that old.  He comes from a family of 8; his youngest sibling has 11 children, he himself has 10 children. A religious man who seems to be looking forward to moving on into the next life. There was only one other group staying at the hotel, 3 women traveling together, and he entertained the five of us during dinner with some little magic tricks. He obviously relished our confusion. Somehow I doubt the proprietor was aware of his sideline entertaining, but he was pretty tickled to show us his tricks, which he ultimately explained to us how he did them.

Then we saw Cozy! Our favorite chimp. And just exactly like the TV show, he runs around along the fence grunting and clapping his hands together with arms extended. 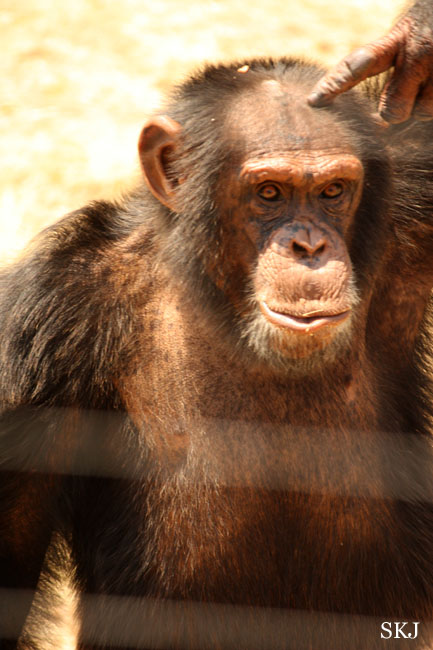 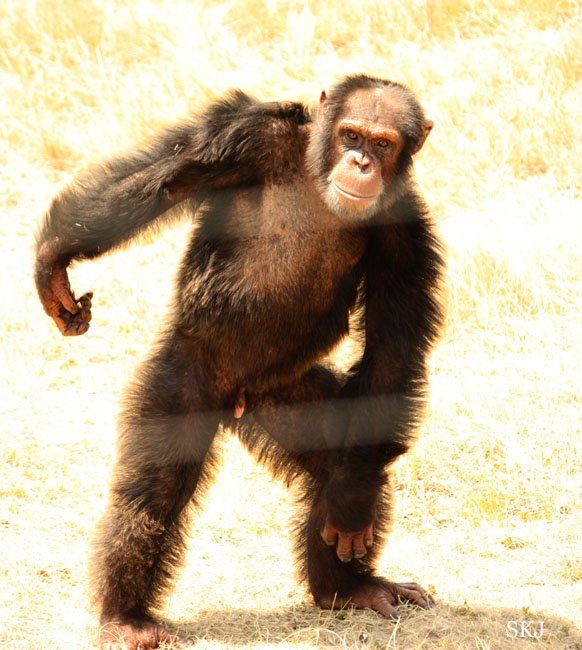 He and another chimp were throwing nut shells over the fence at us. I got hit twice by the flying objects. Several other chimps we recognized from the TV show also. Unfortunately Animal Planet seems to have canceled the show. Losers. Poor Cozy was an experimental chimp in a medical lab and has obvious brain damage, which makes him a bit wacky and not quite “all there,” but utterly lovable; he seems to be a favorite of pretty much everyone who works with him. He was also castrated. So despite his size and prowess, he will never be an alpha male nor will he ever get any action from the ladies; neither sex of his mates sees him as a male. Sad. Though we know many of the stories of the chimps, the desperate situations from which they were rescued, from having watched the TV show, hearing them again while the chimp is right there in front of you in person doubles the impact. So sad, it’s almost unbearable. Sweet, beautiful, intelligent creatures. 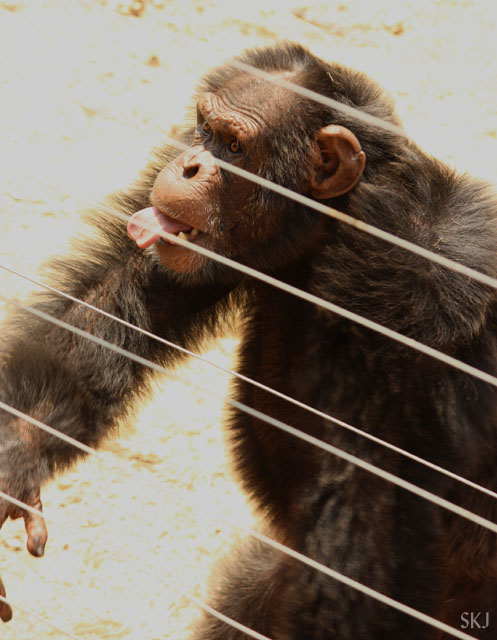 The hotel was amazing. Best night’s sleep I’ve had in ages and the food, particularly dinner, was divine ... with, of course, the entertainment of Robert.The manager was accommodating to no end, as all of the hotel/hostel proprietors have been to date. It’s just a pleasure to stay anywhere so far. Below, some of the other precious chimps at Chimp Eden, so playful, you just want to scoop them up and cuddle them. Look at how in the last chimp pic, he's resting his arm on his foot in the crook between his big toe and the other toes. And finally, the lovely sunset ... another consistent pleasure here in South Africa. 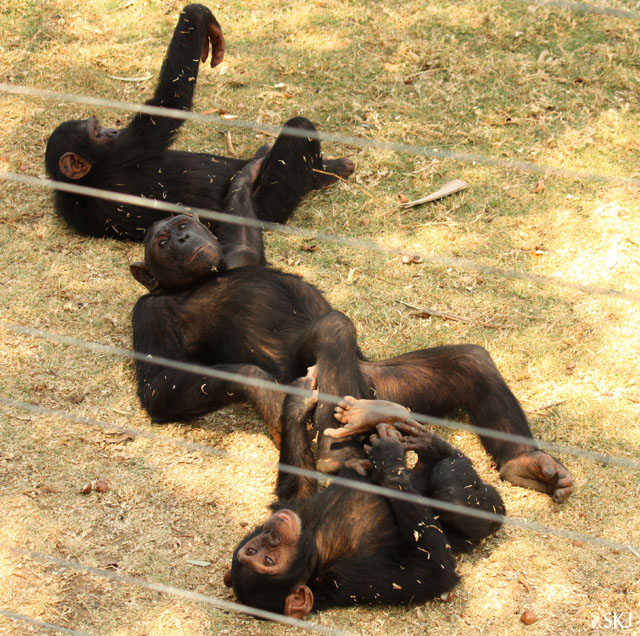 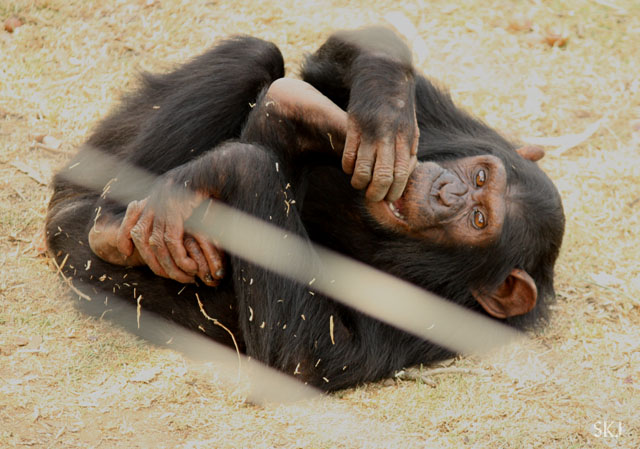 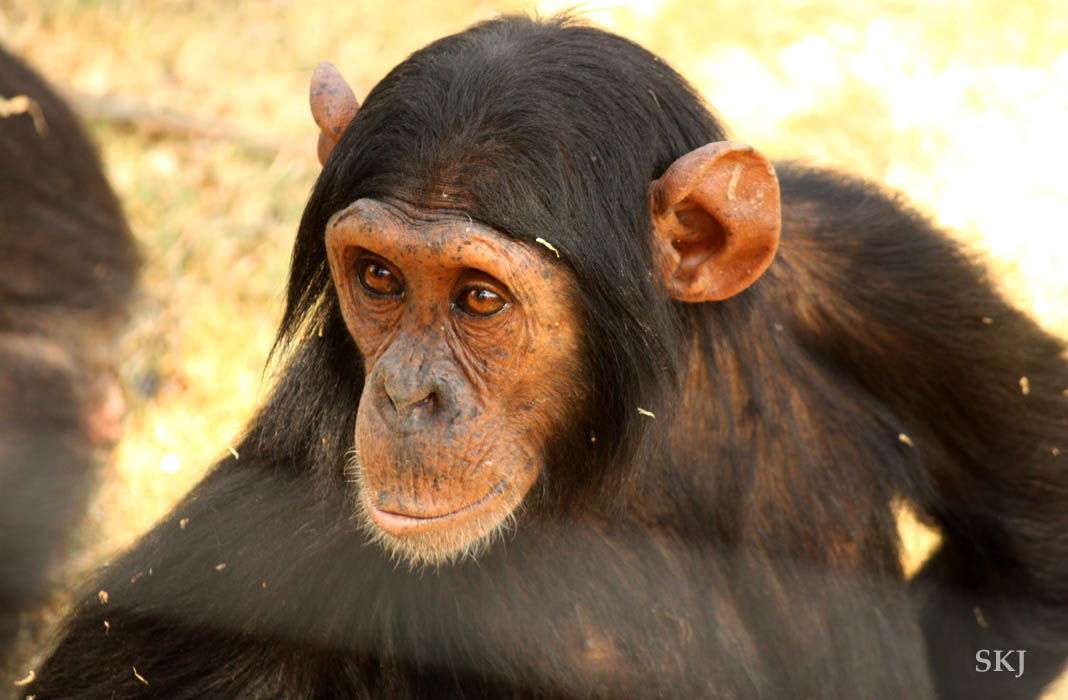 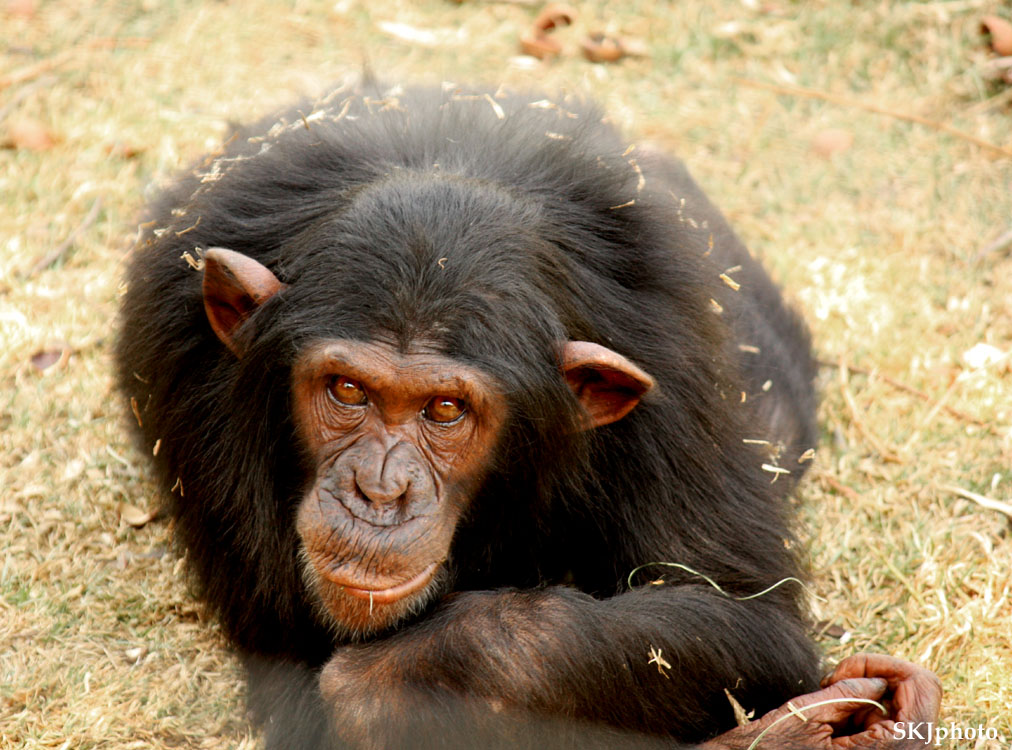 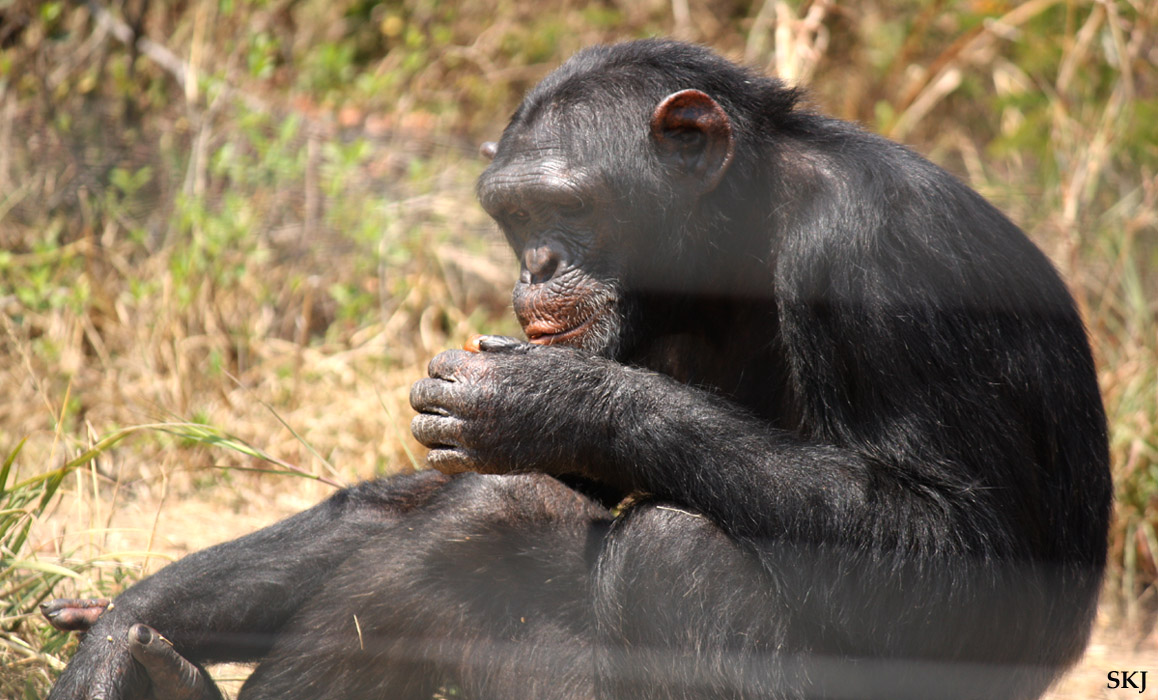 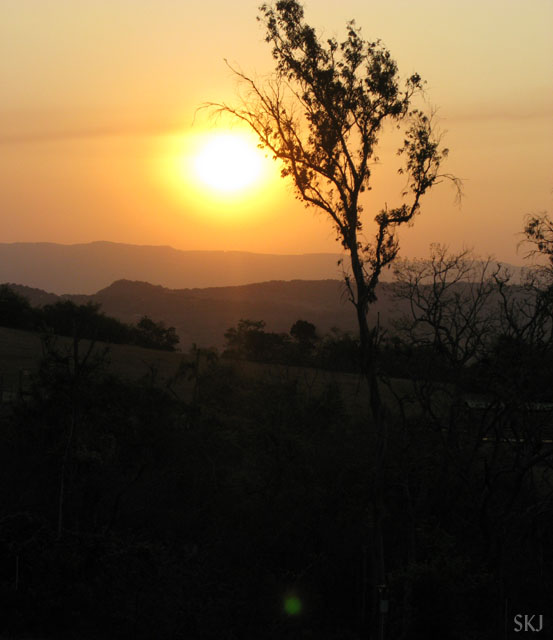