Love and Hate: People, Animals and Trucks on Safari in Kruger National Park

My love of nice people is the result of the diabolically crappy vehicle the truck rental company saddled us with…. they finally showed up with a replacement camper truck that is literally an antiquated POS. However, the one thing we’ve gotten out of all of our troubles with the vehicles, is the opportunity to receive an endless train of kindness and help from strangers. Everyone except the rental company has bent over backward to help us in whatever way their power allows, depending on our current situation. Let me provide some examples:

While in Graskop, the proprietor of our hotel where our battery went dead provided us his jumper cables, external battery charger, made toll phone calls for us on his phone, left his reception desk for extended periods of time to help us, and eventually drove Erik into town in his own vehicle to buy some take-out food for us to eat (there was no eating at the hotel premises and by noon we’d had nothing to eat) and to buy a new battery for the vehicle. We made it to our next campsite inside Kruger and couldn’t get the gas cooking burner to work and had to ask our camping neighbor if he could help, as the tools in the car were so cheap we broke them trying to work on the cooker. An extremely nice fellow helped us.

The following night, one of our tires began leaking at an alarming rate – the pressure valve was broken. So we looked around the car at the tires, to find that the spare tire underneath the car had a nail in it and zero pressure. There was one other spare on the back. Just then a man walked up to us and asked us if we were having any problems. We explained the situation and said we’d probably have to put the one good spare on in the morning. The man just jumped up and started taking down the spare tire and said, “Let’s get this changed!” The car jack on the outside of our vehicle was stuck and we couldn’t unbolt it from the car (again the cheap tools were inadequate), so the guy ran back to his truck and got his equipment. Jacked up the car and pretty much changed the tire by himself. Though Erik tried to help, he pretty much just took over.  We offered him and his companions some beer for their kindness and he said, “Why don’t you just bring the beer over and have a seat with us.” So we did, and then his wife set down 2 hot bowls of freshly-made minestrone soup in front of us. So with zero solicitation, they changed our tire and fed us.  They were German and told us some great travel tales from their time in Botswana and Zimbabwe. After we finally parted ways and we went back to our truck, I realized we never even exchanged names. So he’s the nameless awesome stranger.  I can’t even believe the karmic debt I’ll have to pay back -- if you are a stranger, beware I will have to be excessively nice to you!

Here we are smiling, though Erik looks pretty exasperated. 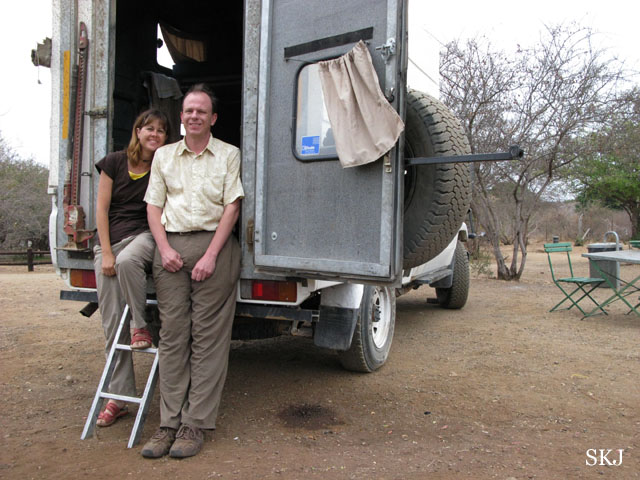 So anyway, we took another 4x4 route, not quite as adventurous as the last one, but saw some good stuff. We had an amazing experience getting stuck right in the middle of an elephant herd crossing the road on both sides of our truck. We didn’t mean to get caught in the middle, we just stopped to watch some elephants cross in front of us, and before we could continue on, tens of elephants started streaming over the hillside and crossing behind us as well. We’ve had many excellent elephant sightings. Today, for example, as we were exiting the park, we saw a tiny little baby coming to a pond to drink with his family.  So darn cute. 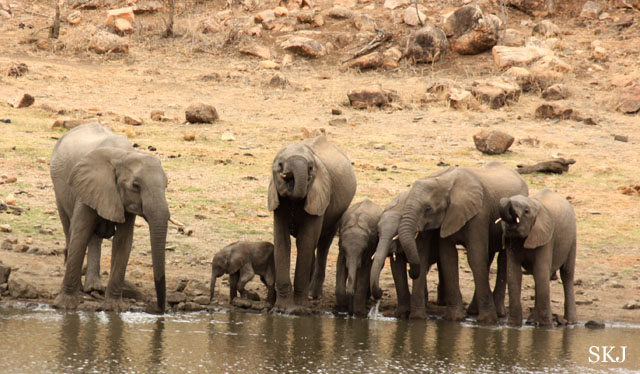 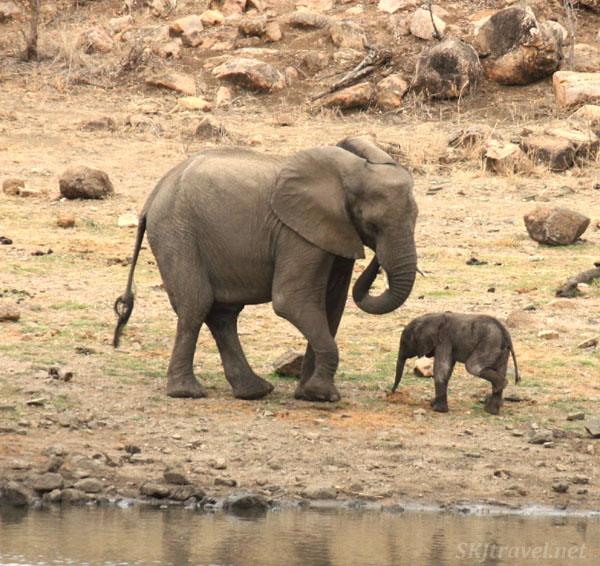 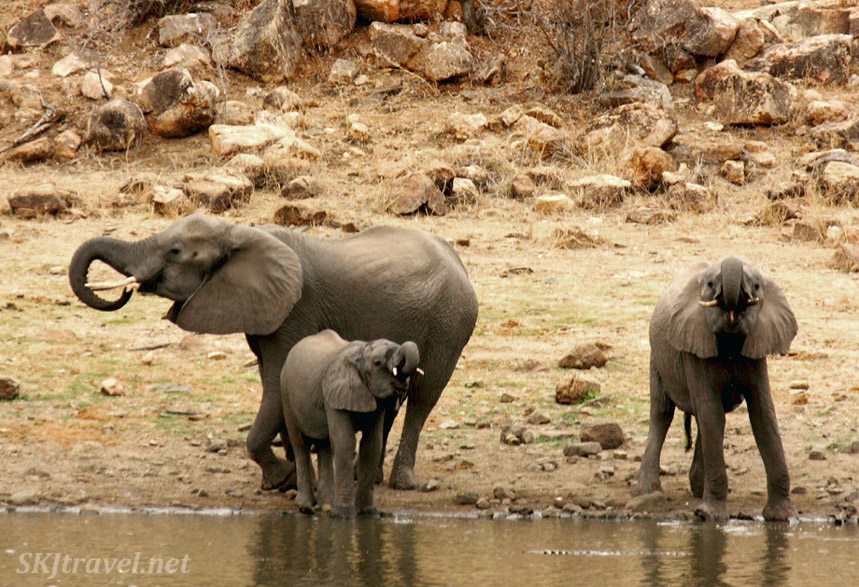 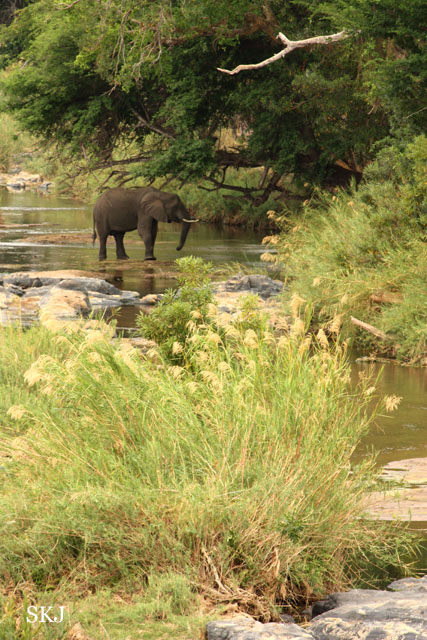 Both of the campsites we’ve stayed in during our second stint in Kruger have had hyenas patrolling the perimeter. The first night, in Satara, the hyena seemed to have a particular affinity for us. We were parked right against the fence. He kept lying down right across from us, looking at us like some kind of docile puppy dog. The hyenas at the next camp were much more “hyena-ish” -- large, menacing creatures pacing back and forth, snorting and sniveling. 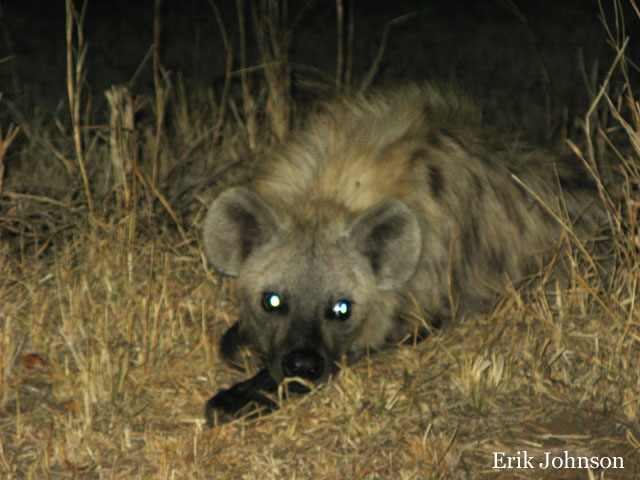 Our big score was spotting a pair of saddle-billed storks. There was a poster up inside one of the camp reception buildings about them, soliciting help for you to send in any pictures you took and GPS coordinates. There are fewer than 100 inside Kruger park (a very large area) and not many more than that in the whole of South Africa. So it was a fabulous rare sighting. Erik saw them standing on the edge of a small dam and started yelling at me, “It’s them! It’s those saddle-billed birds! It’s them!” He was amusingly excited. 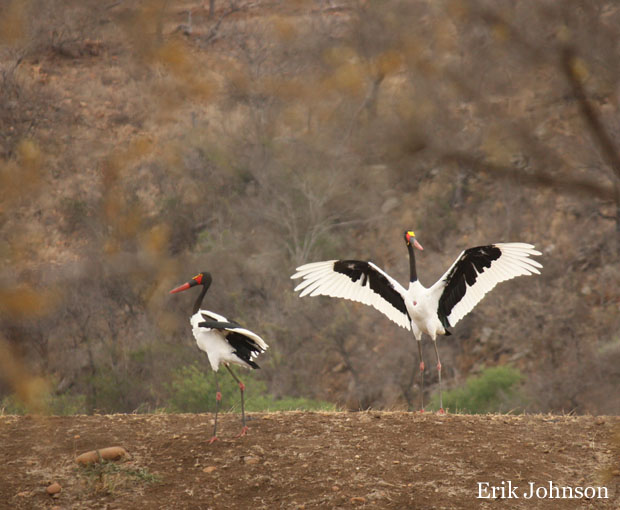 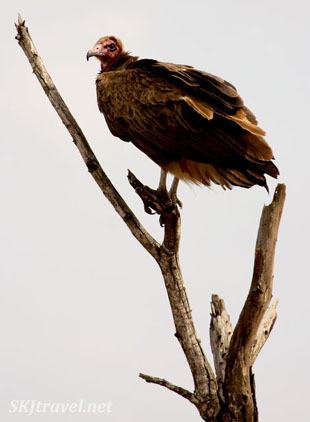 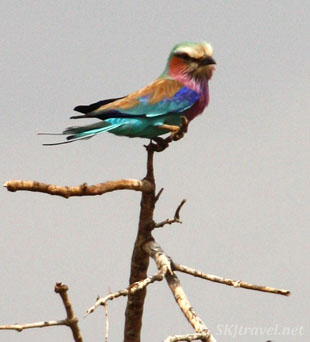 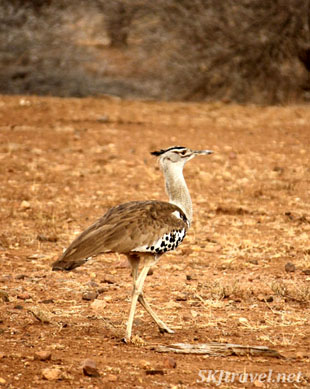 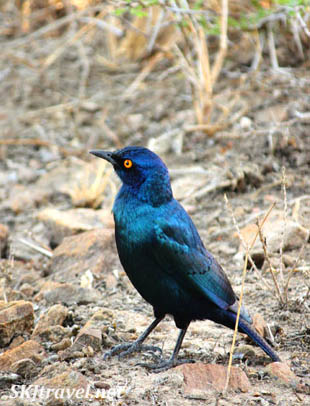 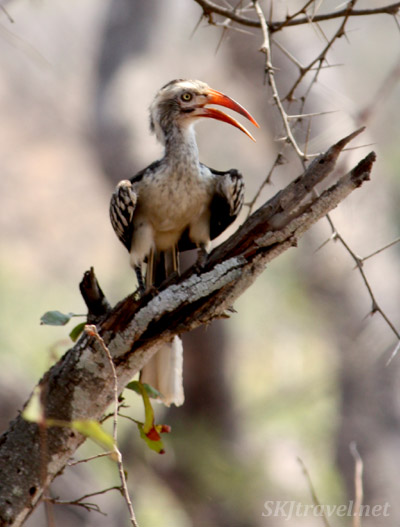 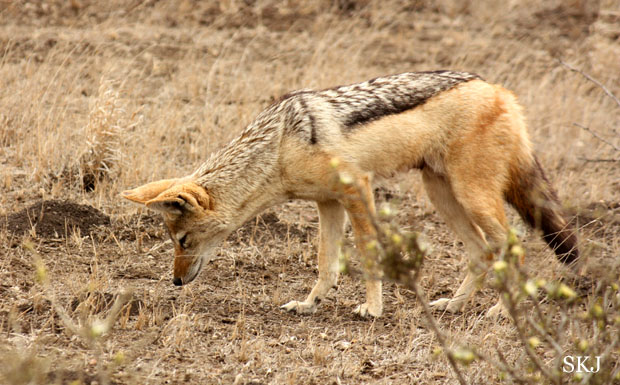 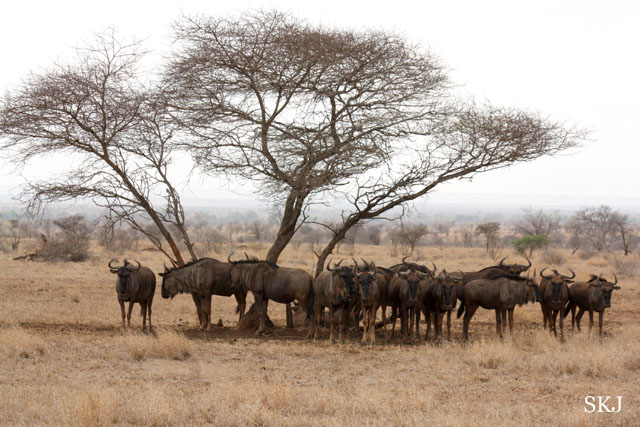 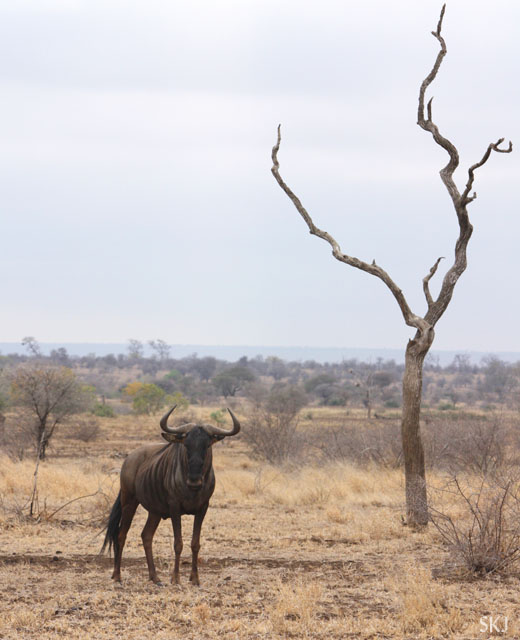 Finally saw a pride of lions yesterday.  I was really going to feel disappointed that I hadn’t seen more, but that was a good score. Nearly at the end of the day, so they slipped in at the last minute into my experience here. You can see from the pictures below how incredibly camouflaged the lions are in the late winter/early spring weeds and bushes which haven't yet turned green and are almost the same color as their coats. Due to terrible maps and inadequate signage, we somehow didn’t take the right turn to get back to the road that would take us most expediently to our next camp. All camp gates close promptly at 6pm (dusk). We ended up driving at totally inadvisable speeds, risky to both us and the animals, to make it to camp at precisely 6:00pm. Then found out we were supposed to register at a different camp. This is just a satellite bush camp with no reception or anything. No one had told us this, but the gate keeper (gates had actually already been closed), after a few minutes of skepticism, finally welcomed us in. I mean, what were they going to do? Listen to us getting devoured by lions right outside the camp fence? 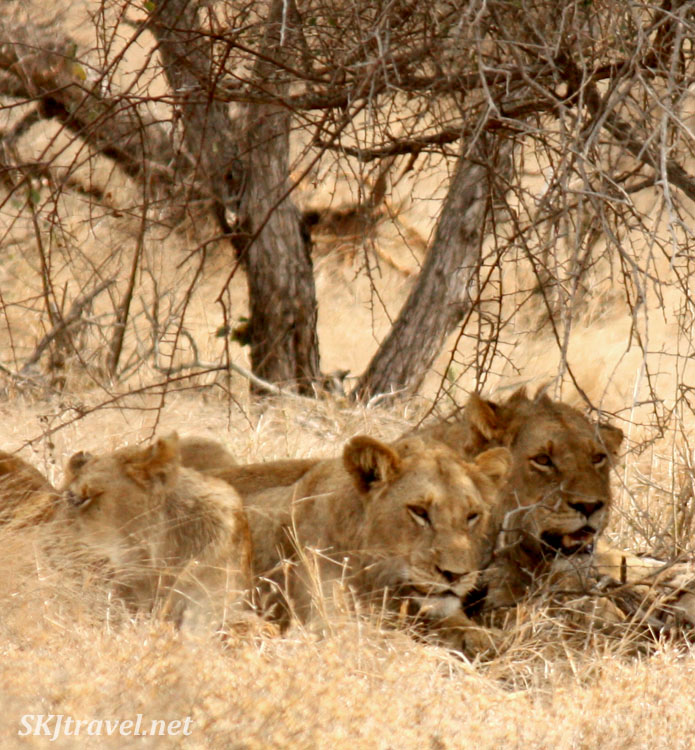 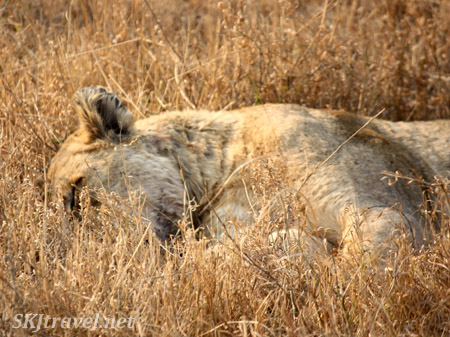 In addition to wanting to see lions, I also really wanted to hear them at night. My friend (and excellent writer) who’s traveled a lot in Africa has described her experiences at night listening to the lions and I’ve coveted those experiences ever since I read her accounts. Finally, our last night in the park, at the bush camp, very small and isolated with no electricity, lions bellowed nearby throughout the night and hyenas yipped and yoweled all night also, and an elephant passed by browsing the tree branches just outside the camp’s fence (a very modest affair, this fence, hardly more than the one we had at North Camp on the EW project). It was a warm night and the stars were out; Erik crashed around 10pm but I stayed up until well past midnight sitting on the roof of the truck watching the stars and listening to the lions and hyenas. (and drinking a beer, naturally ….). It was fabulous.

I’ve spent a lot of time in isolation and immersion in the mountains during my life. I’ve always presumed that the feeling and emotional state one gets in these remote places is the same around the world. But being out beneath the stars in the African bush is very different than being beneath the stars at some high altitude lake in Colorado. In the high altitude I realize it’s more about isolation… that you are contending primarily with inanimate forces of nature such as geology, weather, astronomy, things that show you the vastness of space and time. There are few critters around and only the people you are camping with.  In the bush, it’s about sharing your space with “life,” with an abundance of animals. It’s not about isolation, rather a kind of communion. Listening to all those powerful animals prowling through the night is a feeling I’ve found nowhere else. In this case, the world doesn’t seem vast at all. You lie there in the middle of all this activity and instinct and evolution, and it’s almost paralyzing, feeling all that perpetual movement – the running of prey and the chasing of predator, the scavenging, the serenading, the sleeping, the stalking.

When I awoke the next morning (today) about 5:45am and realized that I was about to leave the park and the African bush, and who knows when/if I might return, I felt sick to my stomach.